Participants were enrolled between March 2017 and December 2018. The diagnosis of bronchiectasis was confirmed according to clinical symptoms (including chronic cough and sputum production) and chest high-resolution computed tomography within 12 months. For eligibility of study entry, patients with bronchiectasis were aged 18 years or greater, remained clinically stable, had no antibiotics use for >4 weeks, and had no physician-diagnosed heart failure. Patients with malignancy, heart attack within 6 months, or acute upper respiratory tract infections within 4 weeks were excluded. We also screened for possible right heart failure based on the radiologic signs on chest high-resolution computed tomography and echocardiography (among 23 out of 53 patients who have undergone the measurement). Healthy subjects were aged 18 years or greater, had no significant diseases influencing on exercise testing. Our study was approved by the Ethics Committee of The First Affiliated Hospital of Guangzhou Medical University. All participants gave written informed consent.

Statistical analysis was performed using Graphpad Prism 5.0 (Graphpad Inc., USA). Kolmogorov-Smirnov test was used to assess normality of the continuous variables. Independent t-test or Mann-Whitney test was conducted for two-group comparisons, and multiple-group comparisons (among patients with or without exercise-induced hypocapnia and healthy controls, see the definition in the results section below) were conducted with one-way analysis-of-variance or Kruskal-Wallis test, followed by Bonferroni correction. Correlation analysis was done using Spearman’s test. 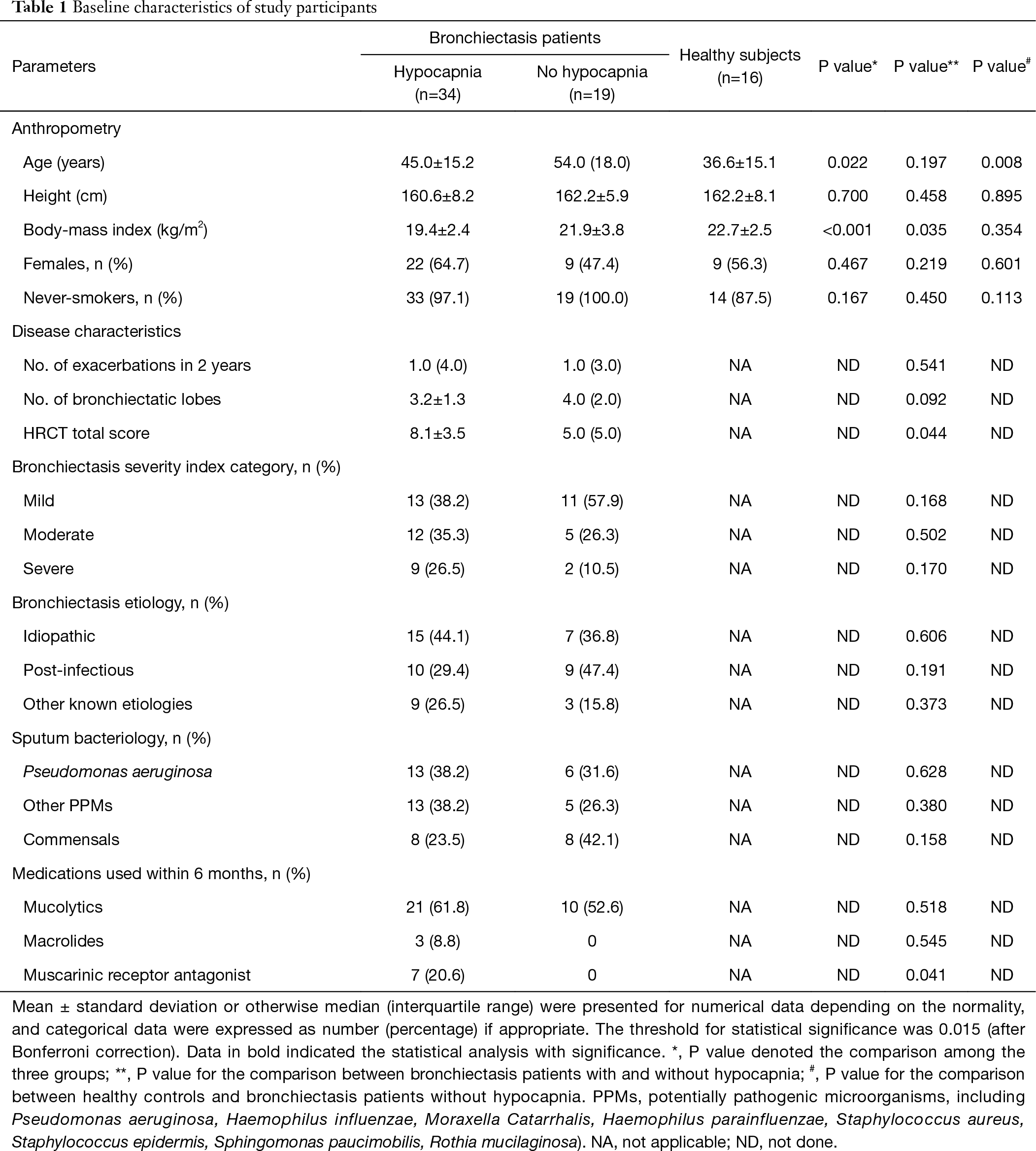 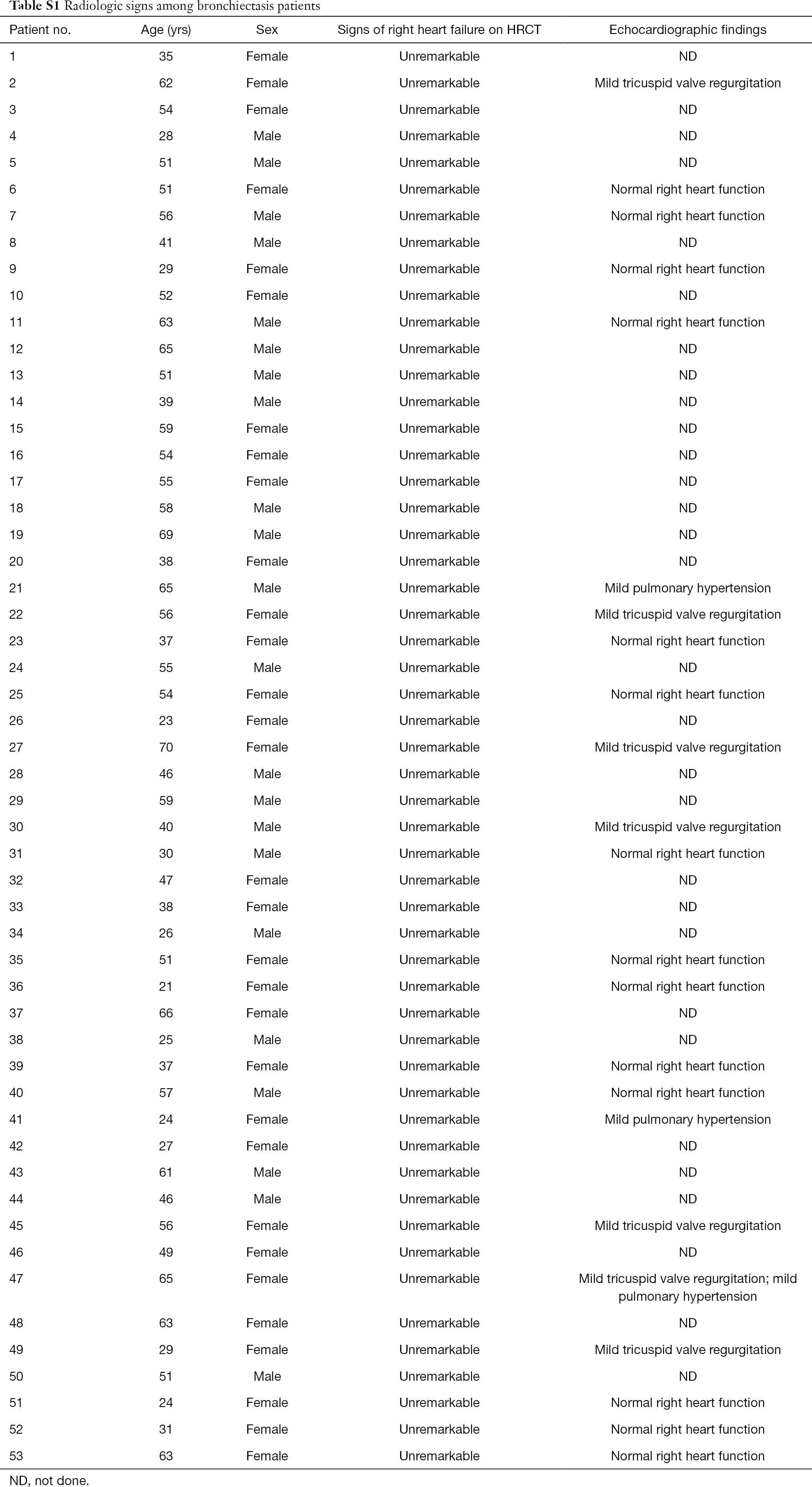 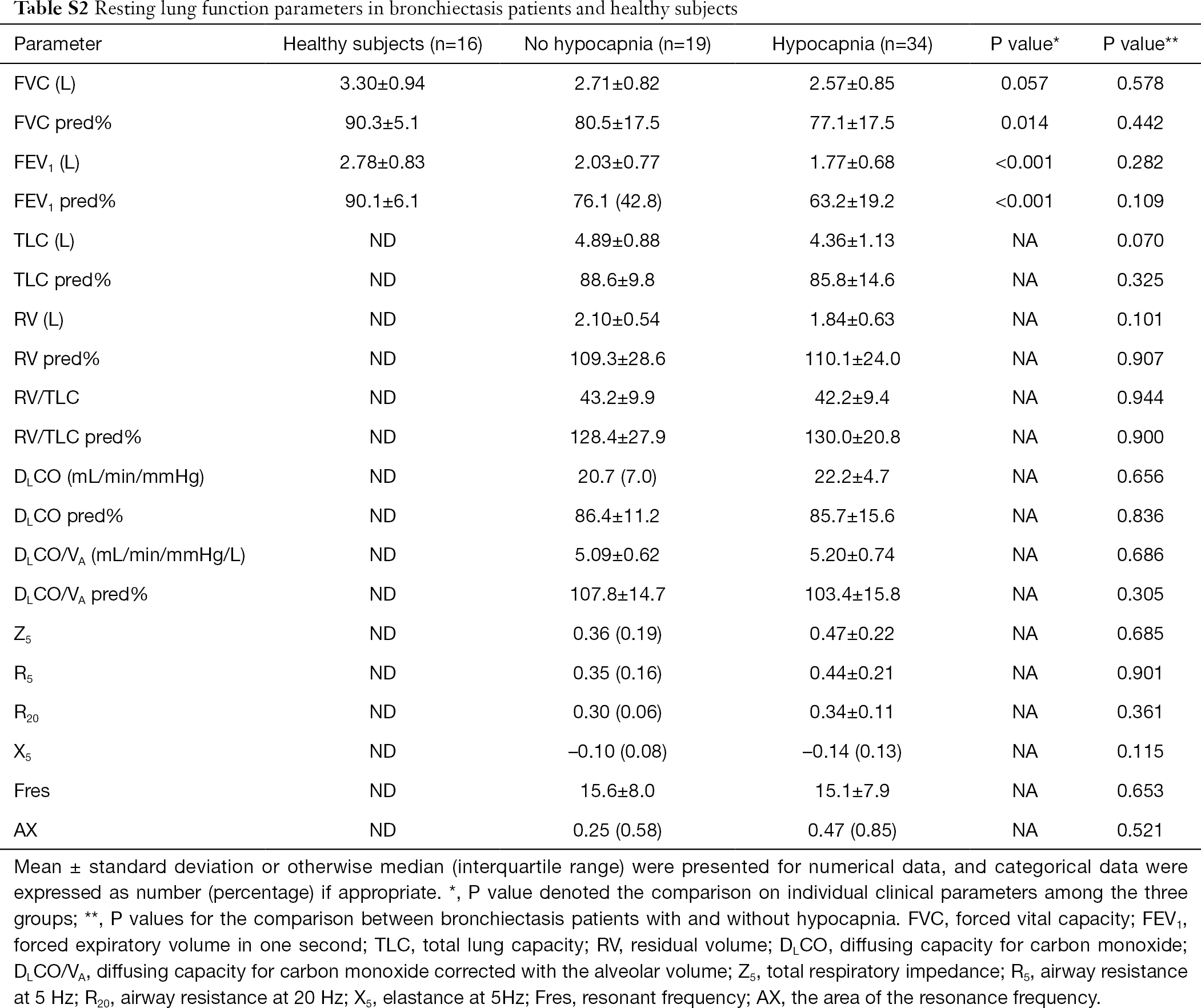 VE/VCO2 was significantly higher in patients with bronchiectasis than in healthy controls throughout exercise (all P<0.01). However, there was no remarkable difference in VE/VCO2 between healthy controls and bronchiectasis patients without hypocapnia at anaerobic threshold or maximal intensity exercise. VE/VCO2 correlated strongly with PetCO2 at maximal exercise (Figure 1), but not resting residual volumes or bronchiectasis severity. VE/VCO2 nadir correlated significantly with the simultaneously measured PetCO2 (P<0.01). We next stratified bronchiectasis patients based on PetCO2 because it explained substantially for exertional ventilatory responses. Patients with consistently low PetCO2 throughout exercise (<35 mmHg, hypocapnia group) did not differ from their counterparts regarding resting ventilatory function, diffusing capacity, lung volumes and airway resistance (all P>0.05, Table S2) (Table 1). 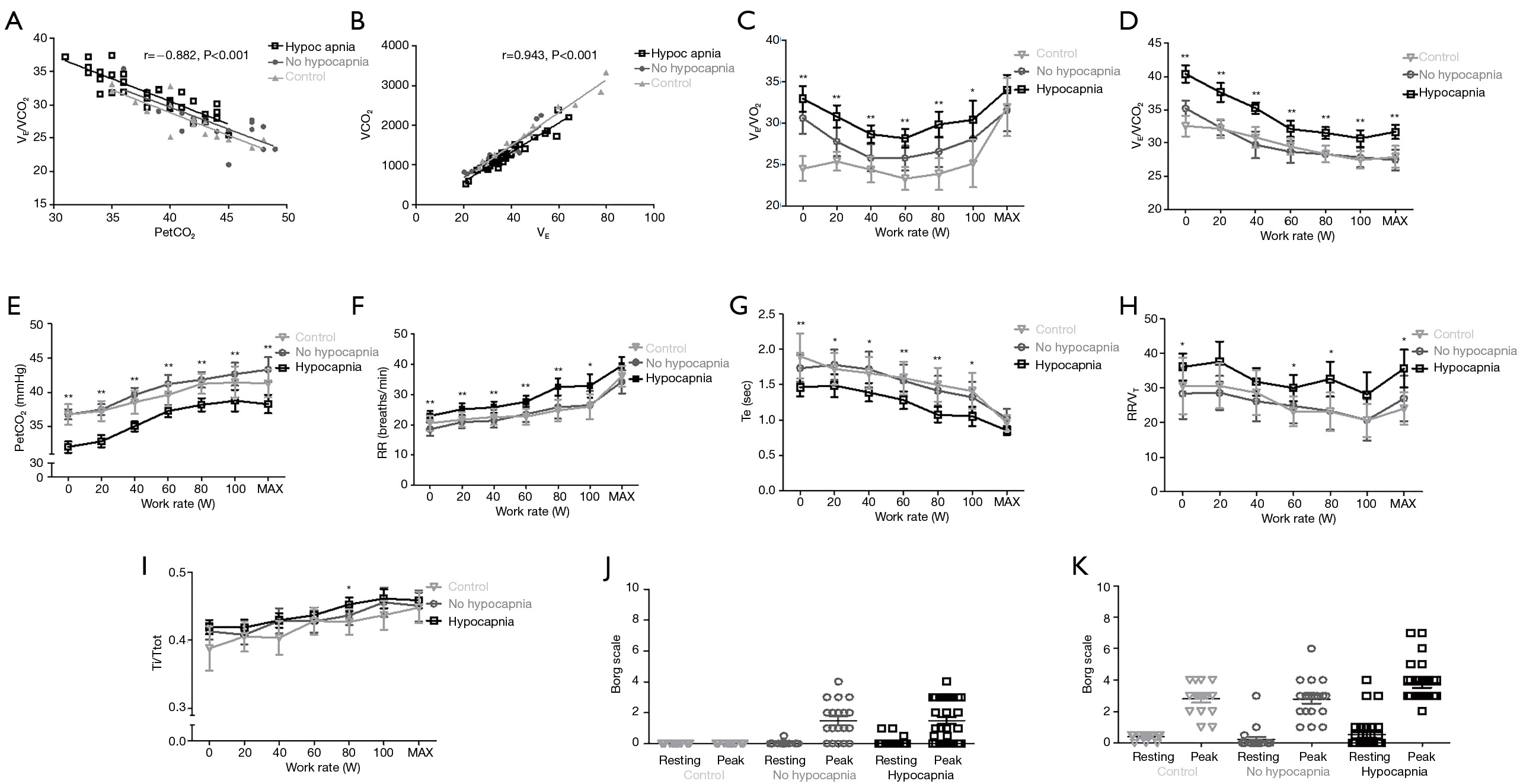 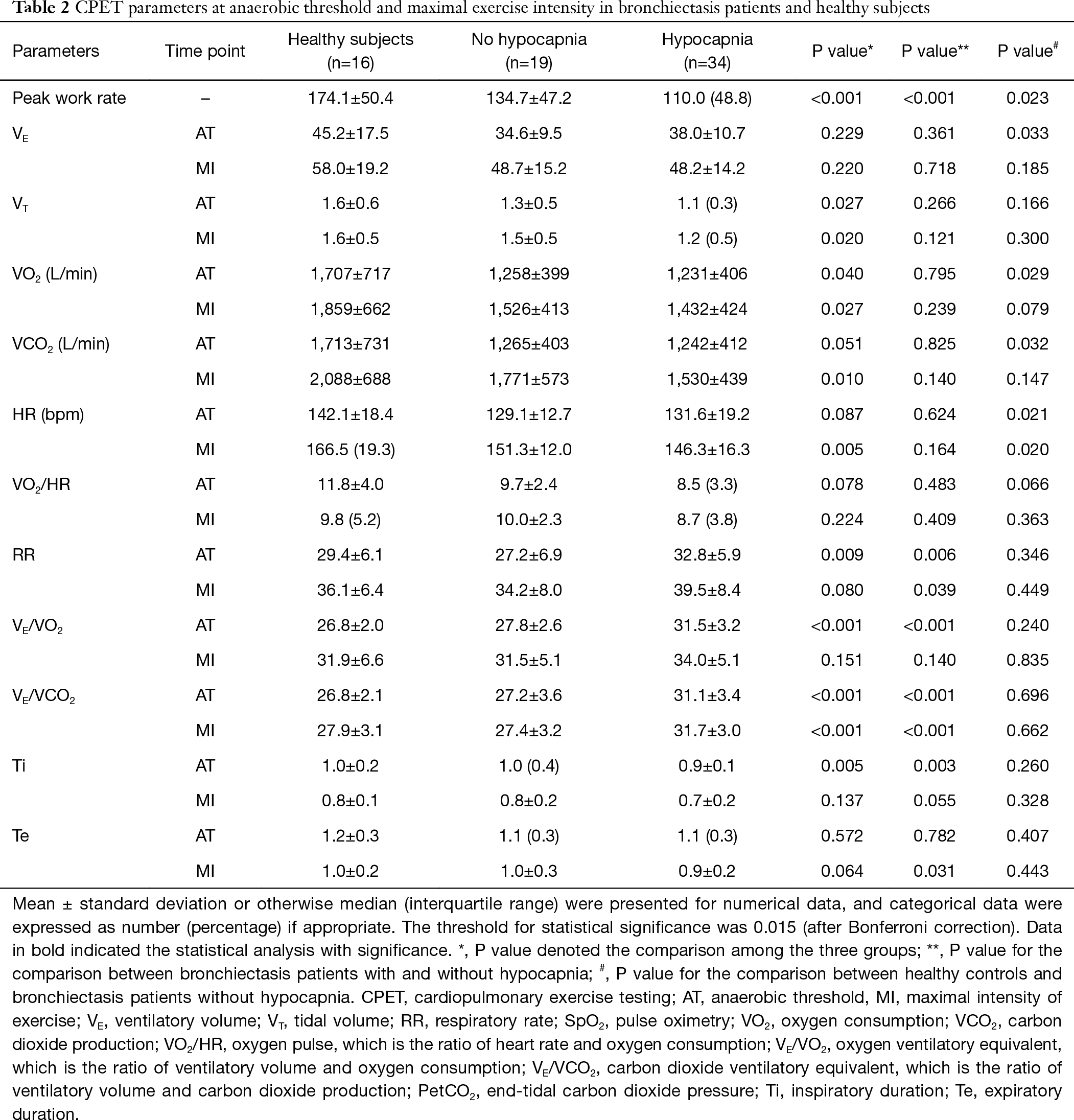 Efficient ventilation is crucial to the exercise tolerability. In adults with cystic fibrosis, the ventilatory efficiency correlated significantly with the imaging severity of bronchiectasis that affects ventilatory inhomogeneity (6). First, our study has reaffirmed the ventilatory inefficiency (high VE/VCO2 levels) throughout incremental exercise in bronchiectasis. The high VE/VCO2 has previously been attributed to excessive ventilation in COPD-heart failure overlap (4), but the mechanisms in patients without clinically overt heart failure are less clear. The VE/VCO2 was recorded at fixed work rate but might get close to the VE/VCO2 nadir at anaerobic threshold or maximal exercise. By stratification based on PetCO2 (which mirrored arterial or capillary carbon dioxide partial pressure), we have identified patients with hypocapnia at different time points during exercise. Because PetCO2 might not invariably be a reliable surrogate of PaCO2, caution should be exercised in interpreting some of our findings. The reduced exercise tolerance might have also resulted from the dead space ventilation (7), because airflow limitation (47% among 53 patients) and increased residual volumes (~30.2%) were present at resting.

Second, patients with hypocapnia had more prominent airflow limitation, and consistently higher respiratory rate and a trend towards shorter expiratory time during exercise. Hence, the inspiratory constraint could also be due to the greater VE. In COPD, although the high VE/VCO2 could be partially compensated by the inspiratory constraint and hypercapnia, VE/VCO2 may remain high because of the exaggerated dead space ventilation and greater respiratory drive, particularly when complicated with heart failure (4). We cannot preclude subclinical pulmonary hypertension or heart failure, particularly in those with bilateral bronchiectasis (8). This might help partially explain for the lack of significant difference in dyspnea scale between patients with and without hypocapnia.

Despite efforts to identify possible signs of right heart failure, echocardiography was not performed in every individual, and therefore we might have included some patients with early-stage right heart insufficiency. Catheterization was not performed before incremental exercise testing, thus pulmonary hypertension which is a crucial indicator of right heart failure could have been under-diagnosed. However, the invasiveness and requirement of medical expertise have limited the applicability of catheterization as a routine measurement in our clinical setting.

Funding: This work was supported by National Natural Science Foundation No. 81870003, Pearl River S&T Nova Program of Guangzhou No. 201710010097 and Guangdong Province Universities and Colleges Pearl River Scholar Funded Scheme 2017 (to Prof. Guan), The Impact and Mechanisms of Physical, Chemical and Biological Interventions on the Development and Outcome of Acute Lung Injury No. 81490534, National Key Technology R&D Program No. 2018YFC1311902, Guangdong Science and Technology Foundation No. 2019B030316028 (to Prof. Zhong).

Conflicts of Interest: All authors have completed the ICMJE uniform disclosure form (available at http://dx.doi.org/10.21037/jtd.2020.03.113). The authors have no conflicts of interest to declare.