Postoperative atrial fibrillation (POAF) is the most common complication after cardiac surgery with the reported incidence from 20% to 50%, depending on the type of surgery, definition and the diagnostic tools (1-4). The POAF is associated with increased risks of morbidity and mortality from hemodynamic instability, heart failure, thromboembolism and bleeding from anticoagulation (1-4). The pathophysiologic mechanisms of POAF have been considered to be multi-factorial. These included postoperative inflammatory reaction, surge of catecholamines, imbalance of autonomic nervous system, changes in intravascular volume status and substrates created by surgical procedure itself such as alterations in cardiac structures and perioperative ischemia (5-10).

Previous studies have evaluated the effect of different pharmacologic and non-pharmacologic interventions to prevent POAF after cardiac surgery. Among them, perioperative use of anti-arrhythmic drugs or a beta-blocker (BB) have been reported to be helpful (1-4,7). Current European guidelines on the prevention of POAF after cardiac surgery recommended perioperative use of BB as a class I recommendation with a level of evidence B (4). However, this recommendation is mainly based on studies those exclusively enrolled patients undergoing coronary artery bypass grafting (CABG) (11,12). Therefore, current American guidelines recommend perioperative administration of BB to prevent POAF for CABG patients but not for overall cardiac surgical patients (2,13).

This study was conducted to evaluate the impact of perioperative BB use on the occurrence of POAF after aortic valve replacement (AVR).

The study protocol was reviewed by the Institutional Review Board and approved as a minimal risk retrospective study (approval number: H-1812-149-997) that did not require individual consent based on the institutional guidelines for waiving consent. Four hundred forty two patients who underwent AVR between January 2015 and June 2018 at our institution were retrospectively screened. Patients who underwent concomitant valve surgery other than AVR, who had preoperative arrhythmia and those with history of previous aortic valve surgery were excluded and 296 patients were enrolled in the present study (Figure 1). Mean age at the operation was 67.2±11.7 years, and 163 patients (55.1%) were male. The EuroSCORE II and STS scores were 2.97±3.10 and 2.88±3.28, respectively. Etiology of AV disease was degenerative, bicuspid, rheumatic and others in 129 (43.6%), 135 (45.6%), 11 (3.7%) and 21 (7.1%) patients, respectively (Table 1). 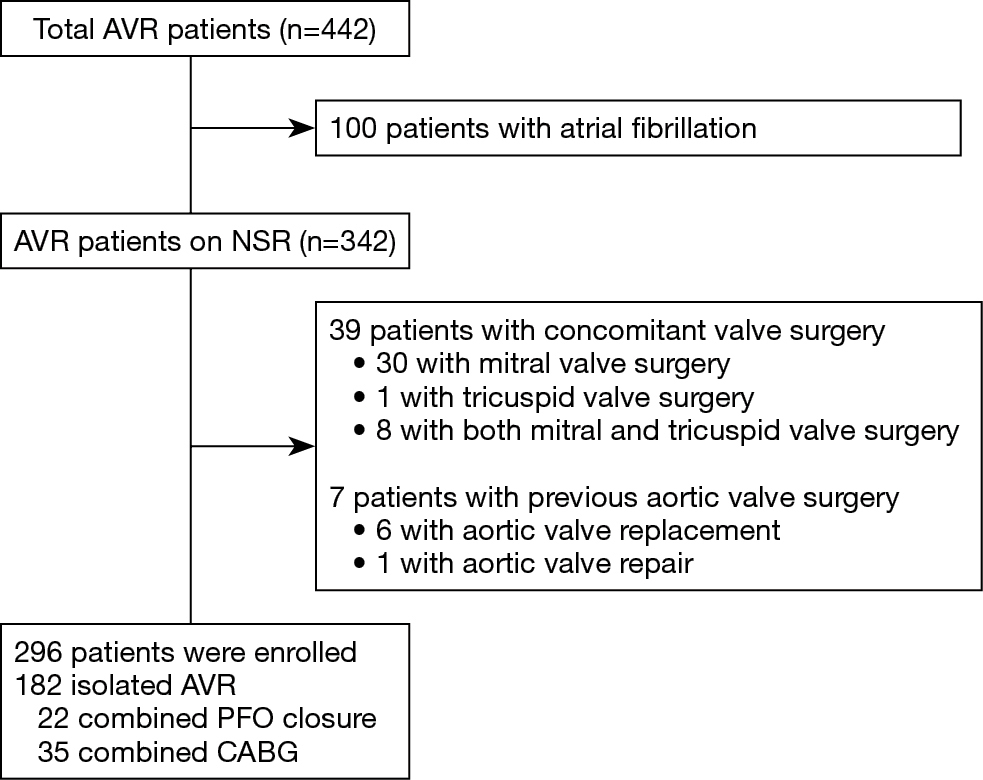 Figure 1 A flowchart of the patients enrolled in the study. AVR, aortic valve replacement; ECG, electrocardiogram. 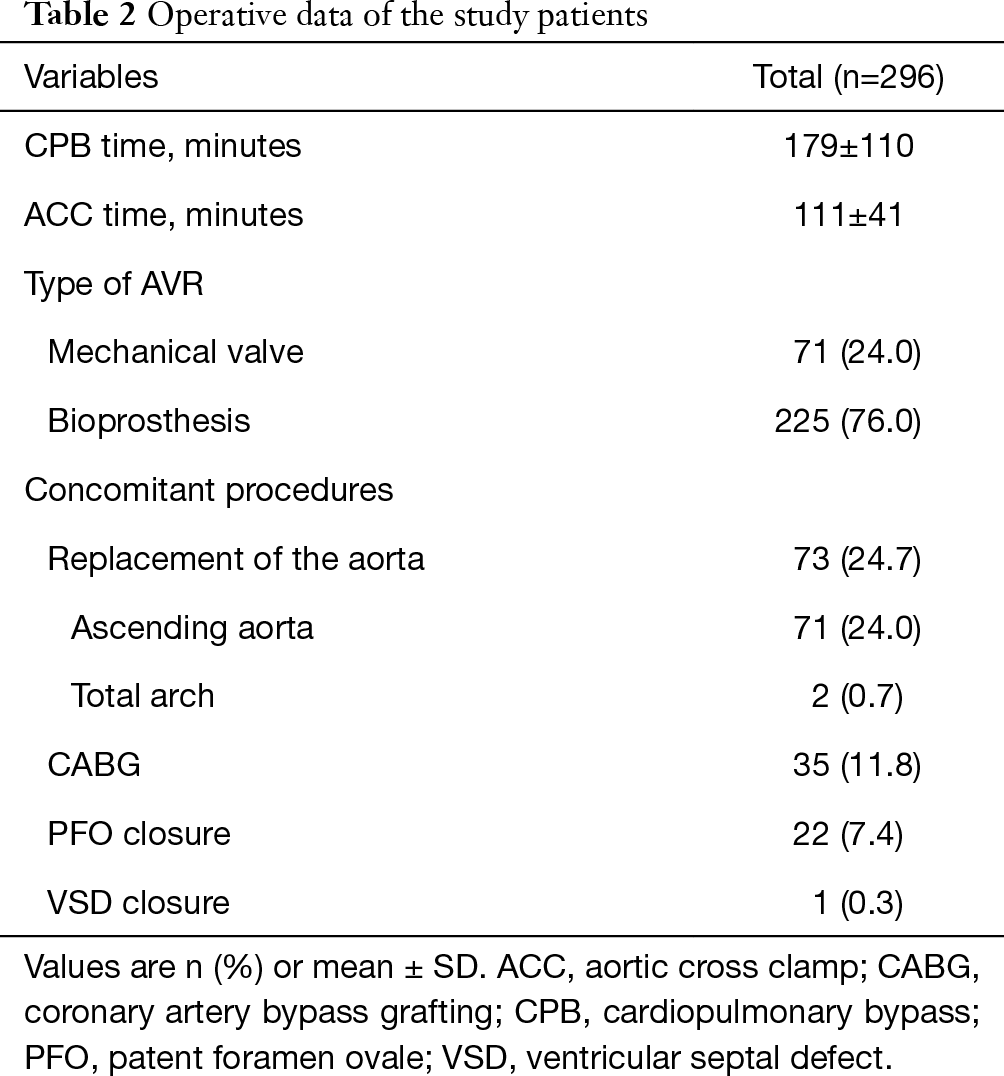 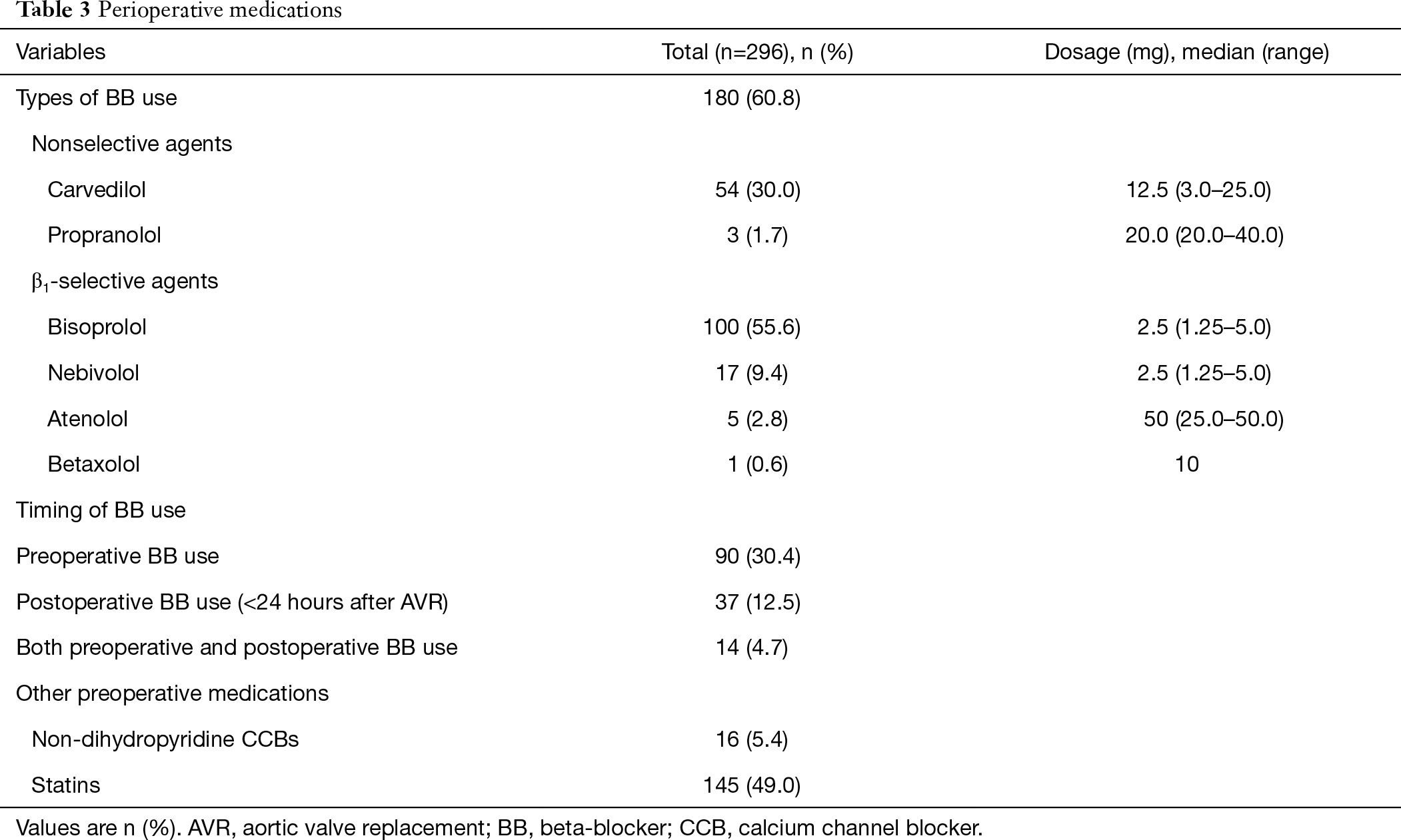 Evaluation of the clinical outcomes

Early mortality was defined as any death within 30 days or during the same hospitalization. All patients were continuously monitored to detect the occurrence of any arrhythmia using five-lead cardiac telemetry until the day of discharge. The occurrence of any short runs of AF was considered as POAF.

The statistical analyses were performed using the IBM SPSS (Version 23.0, IBM Corporation, Armonk, NY, USA) and the SAS software package (Version 9.4, SAS Institute, Cary, NC, USA). Continuous and dichotomous variables were expressed as mean ± standard deviation and number with proportion, respectively. Factors associated with the occurrence of POAF were analyzed; Variables with a P value <0.050 in univariate logistic regression analyses were entered into a multivariable logistic regression model. Multi-collinearity was controlled using the backwards stepwise selection. Results of the multivariable analysis were expressed as P value, odd ratio (OR) and its 95% confidence interval (CI). A P value <0.050 was considered to be statistically significant.

To confirm the impact of BB use on POAF, a propensity score matching (PSM) was also performed by including all preoperative variables. With the use of the caliper-matching method, pairs of patients were matched using a nearest neighborhood (greedy matching) within a caliper width of 0.1 in propensity scores, with a ratio of 1:1. Comparison between the two groups was performed using the χ2 test or Fisher exact test for categorical variables and Student t-test for continuous variables. For the comparison of categorical and continuous variables between the matched group patients, the McNemar test and paired Student t-test were used. The balance of covariates between the two groups was evaluated with standardized mean differences (SMD). 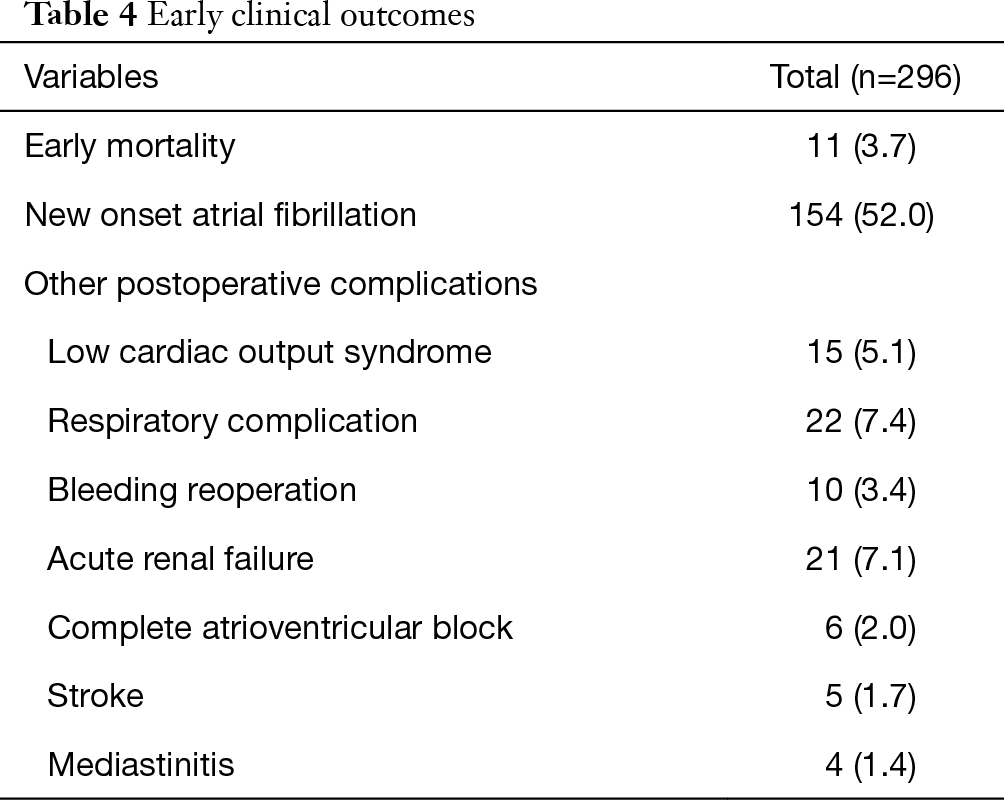 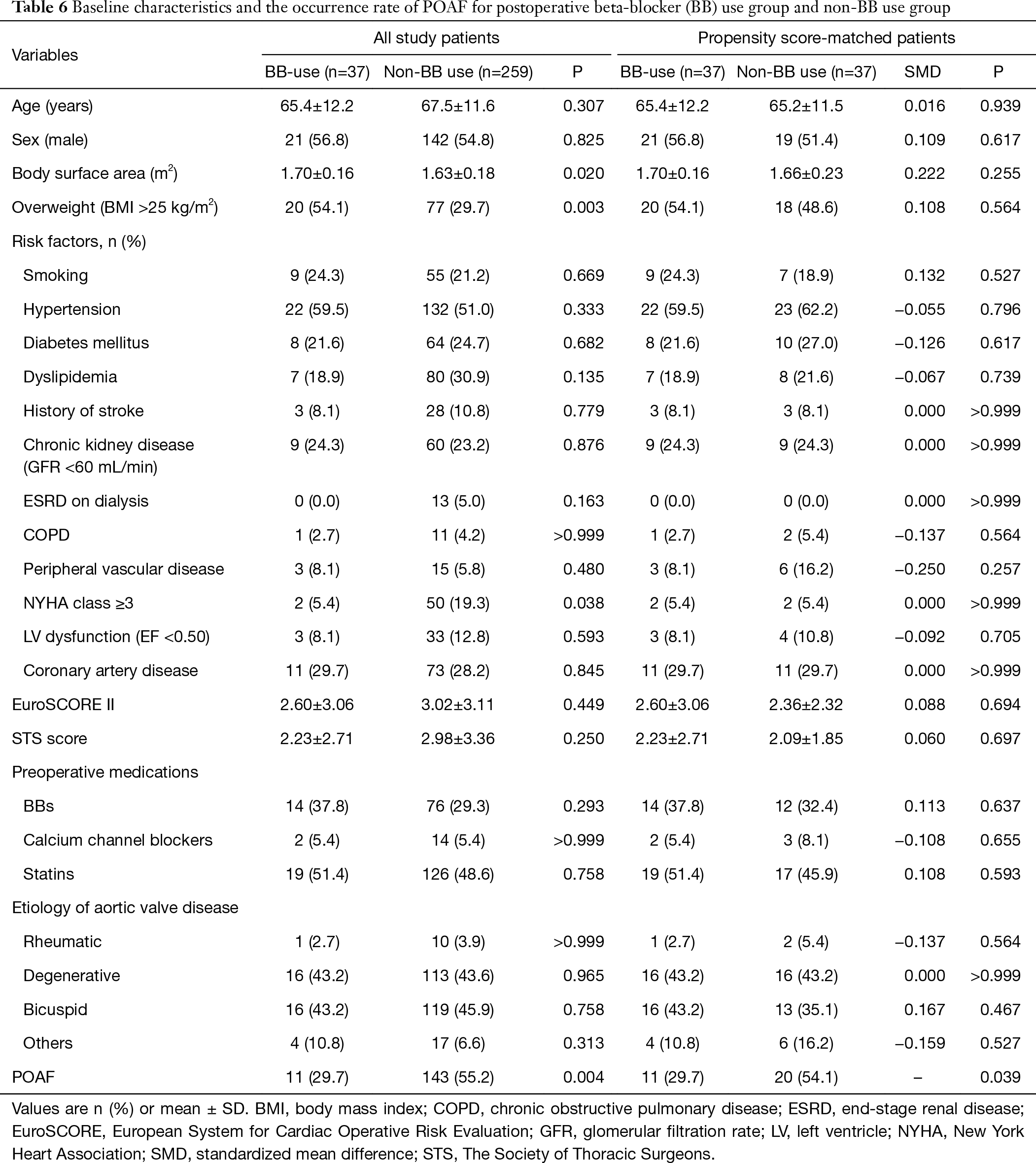 This study demonstrated that postoperative use of BB within 24 hours after AVR rather than preoperative use are effective in prevention of POAF.

The POAF is one of the most common complications after cardiac surgery with an incidence ranging from 20% to 50%. It usually develops between 2 to 4 postoperative days with a peak incidence on the second postoperative day (1-4,14,15). Despite the transient and self-limiting nature of most episodes of POAF, it is an independent predictor of worse outcomes after cardiac surgery, including a 2- to 4- fold increase in stroke and a 2-fold increase in 30-day and 6-month mortalities (1,3,15-17).

Current European guidelines recommend the perioperative use of oral BB for the prevention of POAF after cardiac surgery as a class I recommendation with a level of evidence B (4). However, this recommendation was based on meta-analyses in which, most of the included studies were exclusively enrolling patients who underwent isolated CABG rather than overall cardiac surgery (11,12). On the contrary, current American guidelines recommend that BB should be administered for at least 24 hours before surgery and reinstituted as soon as possible after surgery in patients who underwent CABG (13). However, this recommendation was not generalized to the other cardiac surgical patients (2).

The present study was object to complete the lack of evidence for the routine application of perioperative BB to prevent POAF after cardiac surgery other than CABG. As the first step, patients who underwent AVR without any concomitant other valve surgery were analyzed in the present study. A recent study on patients who underwent AVR reported that preoperative BB use was an independent predictor of POAF after AVR (OR, 0.310; 95% CI, 0.119 to 0.809; P<0.05), and a combination of pre- and postoperative BB administration was even more effective. However, the study is limited due to the small number of study population (n=119) (18).

The incidence of POAF in the present study might be relatively high compared to literature. Meticulous 24-hour monitoring of all patients until discharge might be the reason for this high incidence. Contrary to the relatively high rate of POAF, the early mortality rate of the present study was comparable to those reported by the STS National Cardiac Surgery Database (3.7% vs. 4.5%) (19). The present study showed that the postoperative BB use resulted in a 64% reduction of the occurrence of POAF, and the preventive effect was remained statistically significant in PSM analysis. This effect was in agreement with previous meta-analyses showing 56% to 61% risk reduction of POAF (20,21). The most effective timing of BB administration to prevent POAF after cardiac surgery is uncertain. A recent meta-analysis showed that perioperative BB had consistent protective effect in postoperative supraventricular arrhythmias, irrespective of the timing of administration (21), whereas another meta-analysis showed that postoperative initiation of BB prophylaxis resulted in a statistically significant reduction of POAF incidence by 50% (12). The present study also showed that the perioperative BB use might be most effective when it was administered within 24 hours after surgery, regardless of its use in the preoperative period; when multi-collinearity was controlled by stepwise regression model, only postoperative use of BB within 24 hours after AVR showed statistically significant reduction of the POAF occurrence.

Only preoperative use of BB was not effective at all in reducing POAF after AVR. This could be explained by adverse effects associated with a rebound phenomenon caused by discontinuation of BB after surgery in patients who took them before surgery (22,23). This result is in accordance with current recommendations which suggest that patients who are already taking BB should continue to take them up to the morning of surgery and restart on the first postoperative day after surgery (24).

The present study has limitations that must be recognized. First, this study was a retrospective study although all consecutive patients who underwent AVR during the study period were enrolled. Second, protocols regarding the use of BB such as the types of drugs, dosage and timing of administration had diverse heterogeneity. Further randomized controlled trials based on the uniform protocol of BB administration might be needed to draw a definitive conclusion.

Conflicts of Interest: All authors have completed the ICMJE uniform disclosure form (available at http://dx.doi.org/10.21037/jtd.2020.03.30). The authors have no conflicts of interest to declare.

Ethical Statement: The authors are accountable for all aspects of the work in ensuring that questions related to the accuracy or integrity of any part of the work are appropriately investigated and resolved. This study was approved by the Institutional Review Board of the Seoul National University Hospital (H-1812-149-997). This study is based on data retrieved from a hospital medical record system. All personal data have been protected and secured according to current national and international laws.