A 41-year-old male patient who presented with dysphagia was diagnosed with squamous cell carcinoma of the middle oesophagus. Preoperative examination showed a T3N+M0 tumour according to the classification of the International Union against Cancer. The past medical history showed right bundle-branch block without any other abnormality. After three cycles of neoadjuvant chemotherapy with paclitaxel and cisplatin (TP regimen), he underwent standard minimally invasive McKeown oesophagectomy, three-field lymphadenectomy and jejunostomy. The intraoperative course was uneventful. The operation time was 490 minutes with 200 mL of blood loss. The patient was sent to an intensive care unit for further treatment. The patient was awake 12 hours later; however, he was found to have lost consciousness, and cardiac arrest occurred 20 hours after surgery. Immediate cardiopulmonary resuscitation was performed, and 2 minutes later, the patient had a recovered sinus rhythm, with a heart rate of 146 beats/minute. No obvious hemoglobin loss or electrolyte imbalance was found, and the ECG results were almost the same compared with the preoperative results. Echocardiography showed medium pericardial effusion, and pericardiocentesis followed by pericardial drainage was carried out immediately. Approximately 400 mL of serous fluid was extracted, and the haemodynamic situation rapidly improved. Following enteral nutrition on POD 3 through jejunostomy, pericardial drainage changed to chylous fluid and increased gradually to a maximum of 1,700 mL on POD 5. Chylopericardium was diagnosed, and enteral nutrition was stopped and changed to total parenteral nutrition. However, the amount of pericardial effusion per day was maintained at 1,000 mL after conservative therapy. Therefore, right-sided video-assisted thoracoscopic surgical exploration was performed, and the thoracic duct was ligated near the diaphragm on POD 8. We did not perform pericardial fenestration due to the effective pericardial drainage. The patient started enteral nutrition on the first day after re-operation. Right pleural drainage and pericardial drainage were gradually reduced and removed, respectively. The right pleural and pericardial drainage changes are shown in Figure 1. No anastomotic leakage was found through a contrast swallow examination. However, gastric emptying was diagnosed, as no gastric peristalsis was found during the examination. The patient received gastrointestinal decompression and continued enteral nutrition with nil-by-mouth therapy. He was discharged on POD 37 after oesophagectomy. Postoperative pathology showed ypT3N0M0, stage IIB. One month after discharge, the gastric emptying disorder was relieved, and oral intake was gradually increased with no discomfort. Then, the jejunostomy tube was removed. 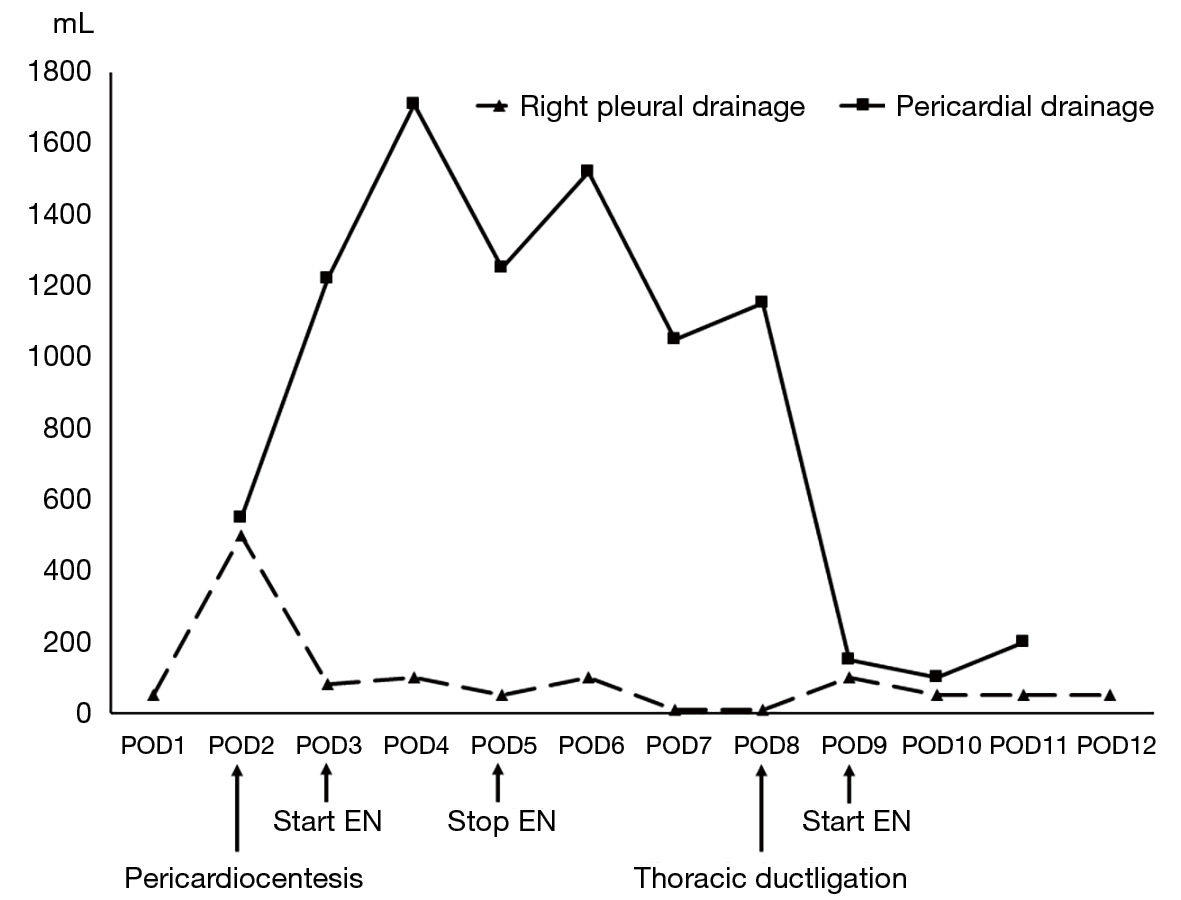 Chylopericardium may be idiopathic, traumatic, iatrogenic or secondary to obstruction of the thoracic duct caused by intra-thoracic tumours. It also may be caused by damage to abnormal branches of the thoracic duct. Usually, the diagnosis can be made by the chylous test and the presence of milky-like drainage. For chylopericardium, conservative therapy is usually initiated, including pericardiocentesis and drainage, nil-by-mouth intervention and somatostatin treatment. Nevertheless, 57% of patients need surgical intervention to be cured (5). The timing of surgical intervention depends on the patient’s condition. Patients with haemodynamic instability may need early intervention to reduce morbidity and mortality.

The surgical interventions mainly include ligation of the thoracic duct near the diaphragm and pericardial fenestration to allow adequate drainage. With the development of minimally invasive technology, thoracoscopic surgery has become the recommended method due to the enhanced recovery and limited number of complications. Left or right thoracotomy may be chosen depending on the surgeon. We selected the original incision of oesophagectomy for convenience and did not perform pericardial fenestration because of the existence of a pericardial drainage tube. Chylopericardium recovered quickly, and no complications were found after thoracic duct ligation. Gyoten et al. reported a method introducing 100 mL of thick cream into the stomach two hours before surgery, and two chylous leakage points were found and ligated (3). This method may reduce the complications caused by ligation of the main thoracic duct, such as chyloperitoneum or lower extremity oedema. However, it may miss minor or invisible chylous leakage points and lead to surgical failure. Therefore, this method needs more evidence and may only be applicable in some specific patients.

Chylopericardial tamponade is one of the rare but fatal complications of oesophagectomy. Pericardiocentesis and pericardial drainage are needed when haemodynamic deterioration occurs. Thoracoscopic ligation of the thoracic duct combined with pericardial fenestration may be the most effective treatment, but more clinical evidence is needed in the future.

Conflicts of Interest: All authors have completed the ICMJE uniform disclosure form (available at http://dx.doi.org/10.21037/jtd.2020.03.98). The authors have no conflicts of interest to declare.