In 1937, Sattler was the first to identify bullae in a patient with spontaneous pneumothorax with the use of thoracoscopy (1). In the past decades, technological advances in microcameras, lenses, digital technology and monitors, as well as the use of general anaesthetic technique to allow one-lung ventilation, preceded the advent of video-assisted thoracic surgery (VATS). Nowadays most thoracic surgeons believe that VATS is the approach of choice when an interventional procedure is considered necessary for the treatment of pneumothorax (2). In addition to simple observation, provided by thoracoscopy, VATS enables the safe and efficient use of procedures necessary for the treatment of pneumothorax like mechanical pleurodesis, pleurectomy and bullectomy. Conservative management of spontaneous pneumothorax (observation, needle aspiration, chest tube, etc.) has proved to result in significant recurrence of 16-52%. The rate of recurrence increases dramatically with more episodes of spontaneous pneumothorax. With the lower morbidity of VATS, the accepted surgical indications for pneumothorax include (1,3): (I) persistent air leak (4); (II) recurrence; (III) radiologically demonstrated large bullae; (IV) spontaneous haemopneumothorax; (V) incomplete expansion of the lung (despite chest drainage and suction); (VI) tension pneumothorax; (VII) bilateral involvement; (VIII) spontaneous pneumothorax in a high- risk occupation (e.g., pilot); (IX) suspicion of malignancy.

There is some controversy among surgeons whether VATS is recommended for uncomplicated first time pneumothorax, although the technique is considered an acceptable treatment for such cases (3). The benefits of VATS procedure in relation to the classic posterolateral thoracotomy (3,5) are as following: (I) safe method for the elderly (>75 years) with low postoperative pulmonary complications; (II) less access trauma; (III) no rib spreading; (IV) quicker recovery; (V) lower hospitalization time; (VI) less postoperative parental narcotics and pain medication; (VII) postoperative stress markers are lower in VATS compared to open procedures; (VIII) earlier mobilization than open thoracotomy; (IX) less shoulder mobility dysfunction in the early postoperative period when compared with open thoracotomy (Figure 1). 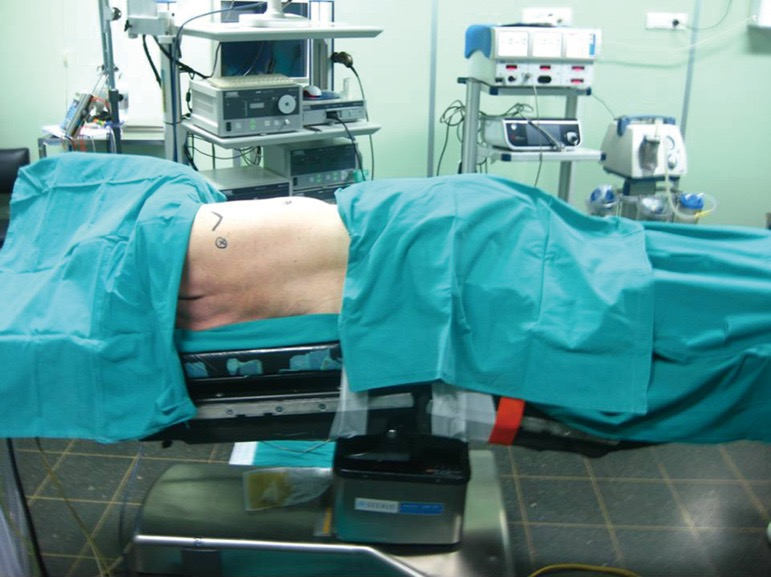 The patient is positioned in the lateral decubitus position with the operating table flexed at 30° to open up the intercostal spaces.

The standard VATS pleurodesis procedure requires three ports placed at the 7th intercostal space mid-axillary line, 4th intercostal space anterior axillary line and the last port just anterior to the tip of the scapula. The triangular port placement permits a panoramic view of the pleural cavity. The instruments and the camera ports should be sufficiently apart in a “triangulation” manner to prevent instrument collisions. Different technique, such as two hole or one hole technique, smaller telescopes, angled lenses to avoid torquing of the thoracoscope, avoiding the use of trocar ports for the insertion of instruments, have been developed and performed in various centers (Figure 2). 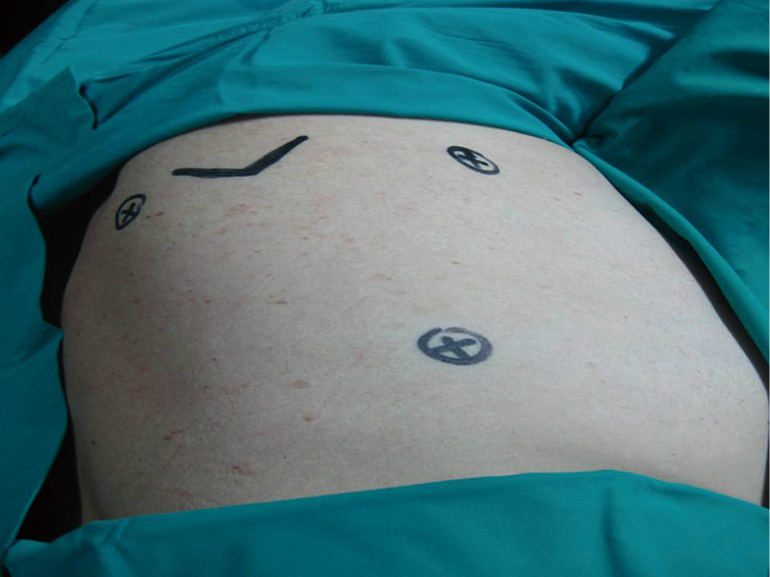 Inspection of the entire pleural cavity is required. Manipulation of the lung tissue is achieved with atraumatic blunt instruments (forceps). Adhesions should all be taken down to ensure good operating field using endoscopic instruments. Haemostasis is achieved with diathermy, staplers and endoclips. The division of apical adhesions asks for special attention due to their proximity to the subclavian vessels. The whole lung surface should be examined thoroughly for bullae due to the collapse of the lung which makes ruptured bullae easy to miss (Figure 3). 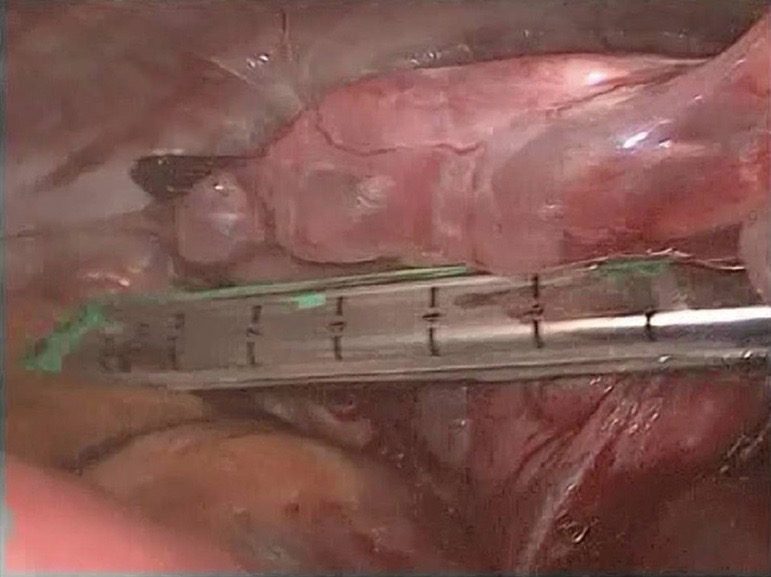 Endoscopic bullectomy is achieved with the help of various endo-staplers (6,7). The resection line should be across healthy lung tissue and crossing of staples should be avoided due to air leakage. In case of absence of visible bullae, stapling of the apical abnormality is always necessary. Caution needs to be applied to the traction of the lung during the bullectomy to prevent tearing of the organ. The resected segment can be retrieved through the port with the help of an endobag (Figure 4). 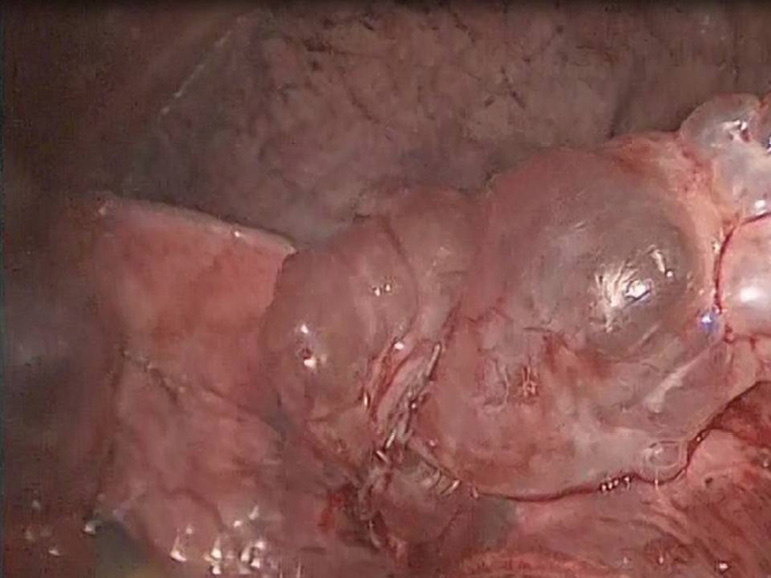 Mechanical pleurodesis is performed by using dry gauze or a mesh mounted at the end of an endoscopic instrument for abrasion (8,9). Pleurectomy may or may not be performed depending on the patient (10). Particular attention should be paid to ensure that mechanical pleurodesis is thoroughly performed at the apical and lateral regions of the pleural cavity, as well as the diaphragmatic surface—extra care is needed in the apex of the pleural cavity to avoid injury of the subclavian vessels. In young patients pleurectomy and pleurodesis are always considered in order to preserve the area near the mammary arteries for future use in case of coronary disease (Figure 5). 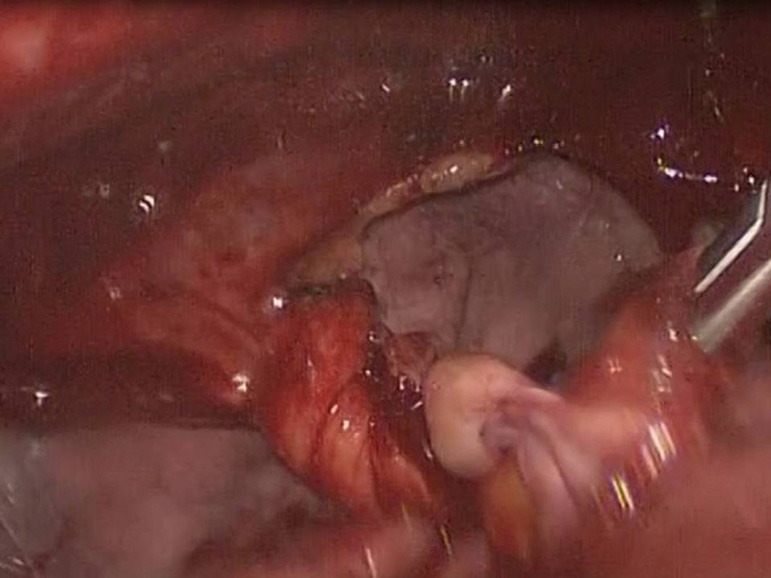 After careful haemostasis is achieved and no air leak from the staple line is observed, one or two chest tubes are inserted in the pleural cavity through the ports. The tube is directed to the apex and lie antero-laterally in the pleural cavity. The lung is reinflated under direct vision and the open wounds are closed (21-30).

Other techniques for managing bullae with VATS are (1): (I) Endoloop Ligation; (II) Endoscopic Suturing, which shows results similar to the endoscopic stapling and can be a viable solution in cases of small localized bullae; (III) Argon beam coagulator, which, according to the literature, is less effective than other techniques due to prolonged air leaks and higher rate of recurrence; (IV) uniportal VATS technique; (V) Two hole VATS technique (31-40). Except from the general contraindications like M.I., severe coagulopathy, inability to achieve one lung ventilation, ventilator dependency, other contraindications may include: (I) Severe underlying lung disease or poor lung function (inability to maintain satisfying ventilation with only one lung); (II) difficult adhesions—dense pleural symphysis (may be more suitable for open thoracotomy). As far as the complications of the procedure we may mark the following (41): (I) air leakage from the staple line; (II) wound infection; (III) bleeding; (IV) intercostal neuralgia; (V) surgical emphysema; (VI) empyema; (VII) complication of the pleurodesis agents.

A conversion to thoracotomy from VATS is required in 2-10% of the patients and is associated with technical difficulties and the experience of the surgeon (38,42-55).

The recurrence of pneumothorax after VATS treatment is reported to be slightly higher (2-14%) compared to that after open thoracotomy (0-7%), although this difference is constantly getting smaller (3,56,57). This may reflect the inadequate exposure of the chest cavity in VATS and subsequent incomplete detection and resection of all bullae. Thorough pleural examination and experience of the surgeon seem to be the two most crucial factors that determine recurrence (3,5).

With the technological advancements in modern surgical instruments, less minimally invasive techniques are rising, like Uniportal VATS, in which both the camera and the instruments are introduced to the thoracic cavity through a single port (58,59).

Although VATS is a more expensive procedure for treating pneumothorax than other alternative ways, financial planning at hospitals have achieved to lessen its cost to a degree similar to the cost of open thoracotomy or thoracoscopy (60). The smaller number of hospitalization days, and the quicker rehabilitation time of VATS treated patients prove that the procedure is cost-effective enough and compensate for the initial high cost.