Long non-coding RNAs (lncRNAs) are a group of RNAs that participate in many kinds of cellular events, such as cell growth, differentiation, and proliferation (5,6). Previous findings suggest that circulating lncRNAs are useful markers for the diagnosis of cardiovascular disease (7,8). For example, several circulating lncRNAs have been discovered as prognostic biomarkers for heart failure, including HOTAIR (9), H19 (10), LIPCR (11), and EGOT (12). The lncRNA CRNDE (colorectal neoplasia differentially expressed gene) is transcribed from chromosome 16 on the strand opposite to the adjacent IRX5 gene (13). LncRNA CRNDE promoted colorectal cancer cell proliferation and chemoresistance via miR-181a-5p-mediated regulation of Wnt/β-catenin signaling (13). According to Ma et al., CRNDE was involved in the regulation of granulocytic differentiation of acute promyelocytic leukemia (14). But it has not been elucidated whether CRNDE has any effect in the reproduction or migration of cardiac progenitor cells. Inspired by bioinformatic prediction and previous work (13), we are interested in the role of CRNDE in myocardial infarction, and therefore we carried a series of experiments in vitro and in vivo for this investigation.

MicroRNAs (miRNAs, ~24 nucleotides) have been reported to affect the stability and translation of messenger RNAs (15). Many reports have revealed that miRNAs could regulate cell apoptosis, reproduction, development, and differentiation (16). In 2016, Zhu et al. demonstrated the potential of using circulating miR-181a as a novel biomarker for the diagnosis of acute myocardial infarction (17). The expressions of circulating miR-181a in patients with AMI were substantially changed in a time-dependent manner, indicating the value of plasma miR-181a as a novel biomarker for diagnosing MI (17). Herein, we aim to investigate the mysteries of miR-181a and its interactions with CRNDE in myocardial infarction.

According to Qiu, Homo sapiens LYR motif containing 1 (LYRM1) could enhance proliferation and inhibits apoptosis of preadipocytes (18). Zhu et al. reported that LYRM1 increased reproduction and inhibited cell apoptosis during heart development (19). However, its functional mechanism remains to be clarified. In our experiments, we are determined to evaluate the cells’ abilities of proliferation and migration under transfections with LYRM1 over-expression or knockdown. Our experiments, results, and analysis may provide valuable information on its roles in myocardial infarction.

Cardiac progenitor cells were isolated from neonatal adult Sprague-Dawley rats by removing the heart and homogenizing the tissue as described (20). The cardiac progenitor cells were then incubated in DMEM +10% FBS (Gibco, HyClone, USA). After that, cardiac progenitor cells were kept at thirty-seven Celsius and 5% CO2. All procedures on rats are in accordance with the guidelines of the Animal Ethics Committee of The First Affiliated Hospital of Fujian Medical University. All the experiments were conducted according to the principles expressed in the Declaration of Helsinki and conform to the Guide for the Care and Use of Laboratory Animals published by the US National Institutes of Health.

RNAs were extracted by Trizol (Invitrogen, USA). We made cDNA by EasyScript and SuperMix (Transgen biotech, USA). 10 ng cDNA was prepared for qRT-PCR by SYBR Green in Prism 7500 (Applied Biosystems, Thermo Fisher Scientific, USA). GAPDH and U6 were controls. Table 1 showed the primer sequences.

The cardiac progenitor cells were lysed, and the proteins were separated through SDS-PAGE and transferred to nitrocellulose membranes (Millipore, USA). The membranes were firstly blocked, treated with anti-LYRM1 (1:500, Abcam), then incubated with horseradish peroxidase linked anti-IgG, and visualized by Chemiluminescence Kit (Thermo Fisher Scientific, USA). Gel-pro was used for statistical analysis.

The CRNDE-WT (wild-type), CRNDE-MT (mutant), LYRM1-WT, and LYRM1-MT including the common sequences with miR-181a were sub-cloned to luciferase reporter plasmids. The reporter vectors and miR-181a-mimic or NC-mimic were transfected to cardiac progenitor cells with lipofectamine-2000. After 2 days’ transfections, cardiac progenitor cells were lysed for luciferase activities’ measurement.

A total of 5×104 cells/mL of cardiac progenitor cells after various treatments were grown in 96-well plate for 1 day. Then, cardiac progenitor cells were washed, and the levels of cell growth were evaluated by CCK-8 assays (Transgen, USA). Ten mL CCK-8 solution was placed to every well, and let incubations for four hours at thirty-seven Celsius. A microplate reader (Beckman, USA) was used to measure the absorbance at 450 nm.

Cardiac progenitor cells after various treatments were placed on the top transwell chamber (Corning, USA) with DMEM and 0.5% FBS. The bottom chamber had DMEM and 10% FBS. After 1 day’s incubations, the cardiac progenitor cells on the bottom were cleaned, fixed, and stained by 0.1% crystal violet for fifteen minutes. We counted the migration cells by microscopy (Zeiss, USA).

Figure 1A showed that hypoxia could enhance the cell viabilities of cardiac progenitor cells, which was positively correlated with the dose of CoCl2 (P<0.05, P<0.01) (Figure 1A). From Figure 1B,C, the cardiac progenitor cell reproduction and migration potentials were also enhanced in CoCl2-related hypoxia. In consistence with the literature, hypoxia could enhance cell reproduction and migration abilities. 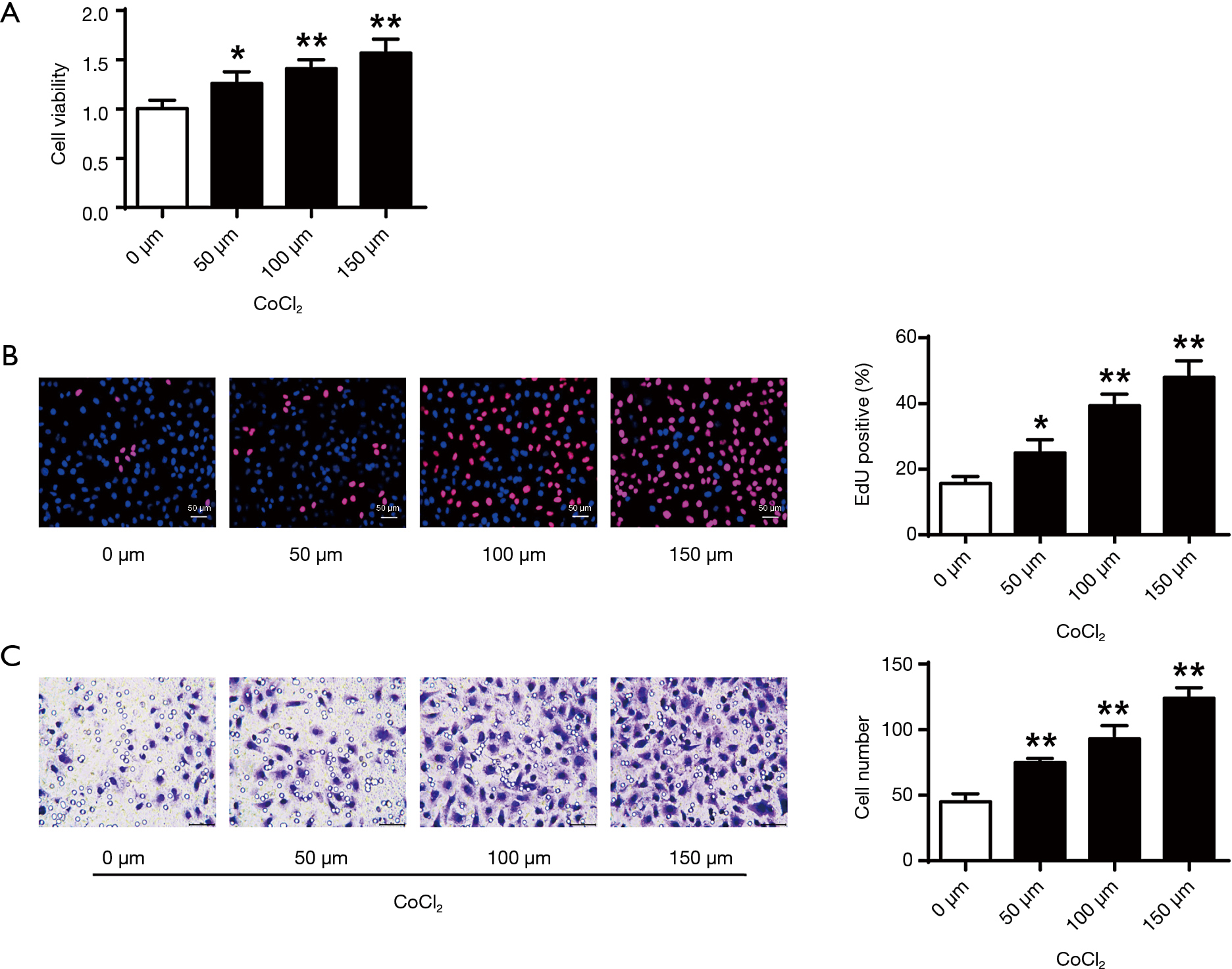 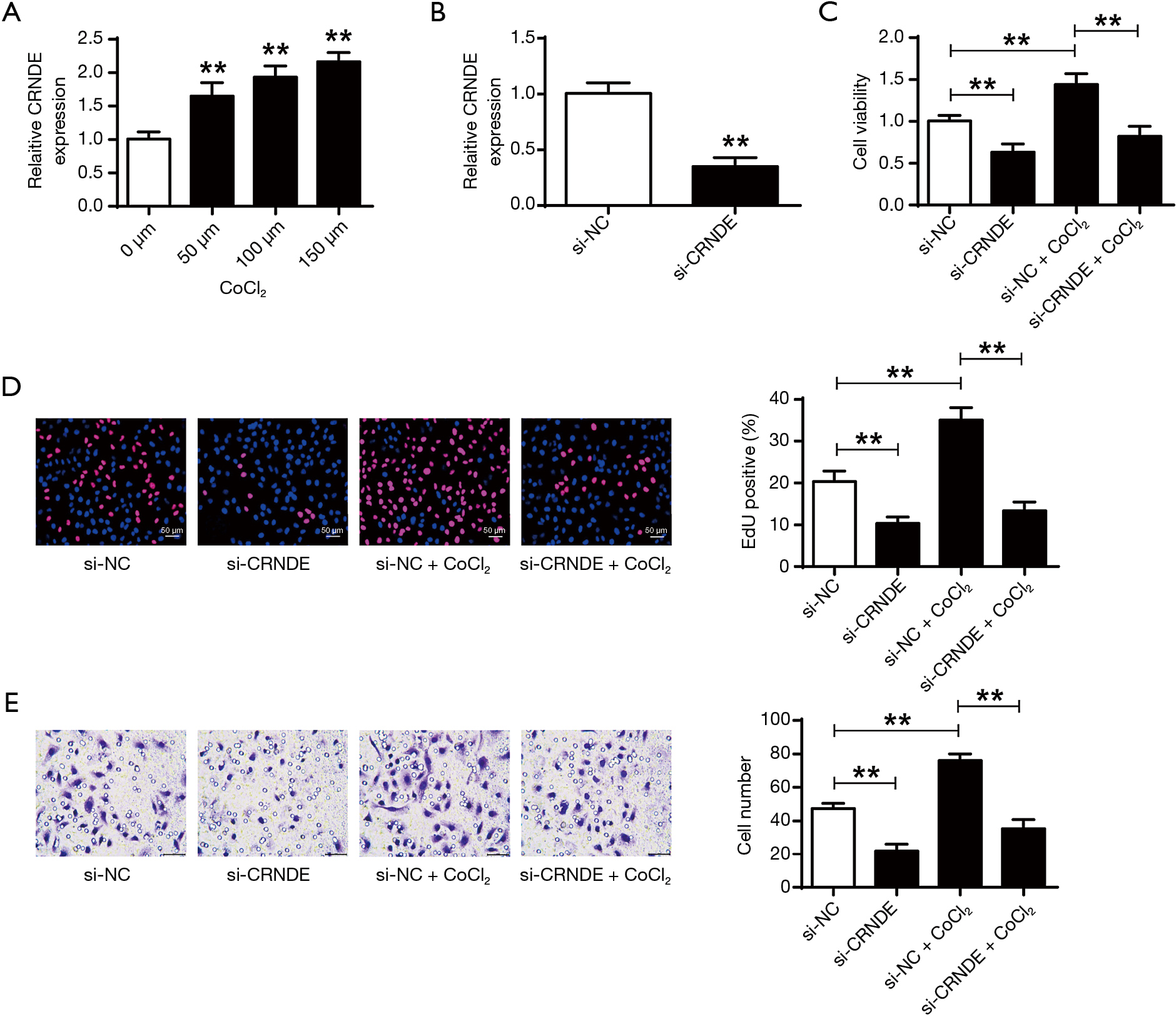 The binding scheme between CRNDE and miR-181a were shown in Figure 3A, with shared binding sequences. According to Figure 3B, CRNDE suppression could greatly elevate miR-181a expressions in both normoxic and hypoxic conditions (P<0.01). Figure 3C showed that miR-181a mimic reduced the luciferase activities of the CRNDE-WT, but didn’t affect the CRNDE-MT (P<0.01). As shown in Figure 3D, the miR-181a expressions were dramatically lowered in cardiac progenitor cells in hypoxia (P<0.05, P<0.01). In addition, the miR-181a-inhibitor substantially restored the cell viabilities (P<0.01) (Figure 3E), and abilities of reproduction (Figure 3F) and migration (Figure 3G) in cardiac progenitor cells. It was illustrated that CRNDE could modulate cardiac progenitor cell proliferation and migration via miR-181a in hypoxic conditions. 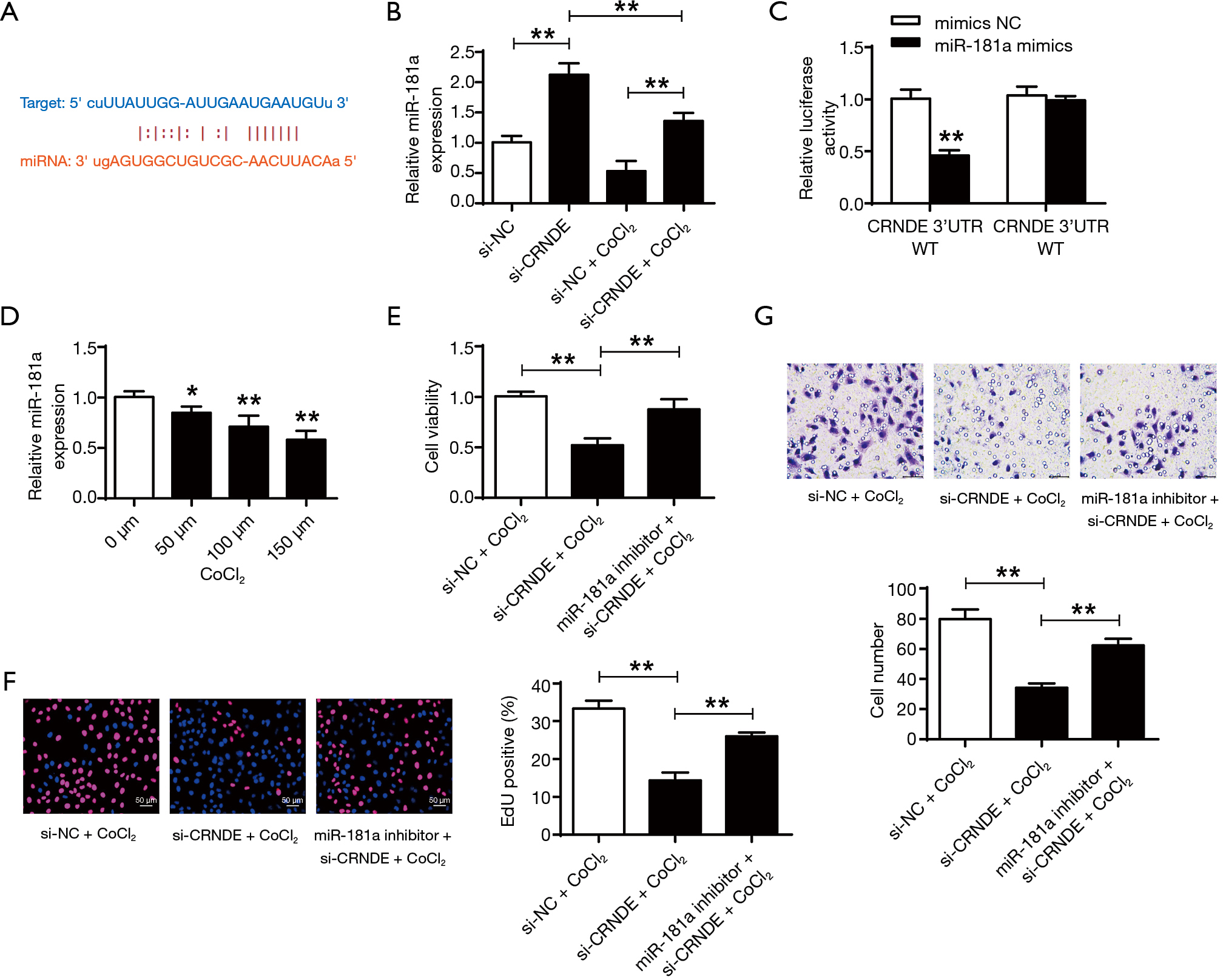 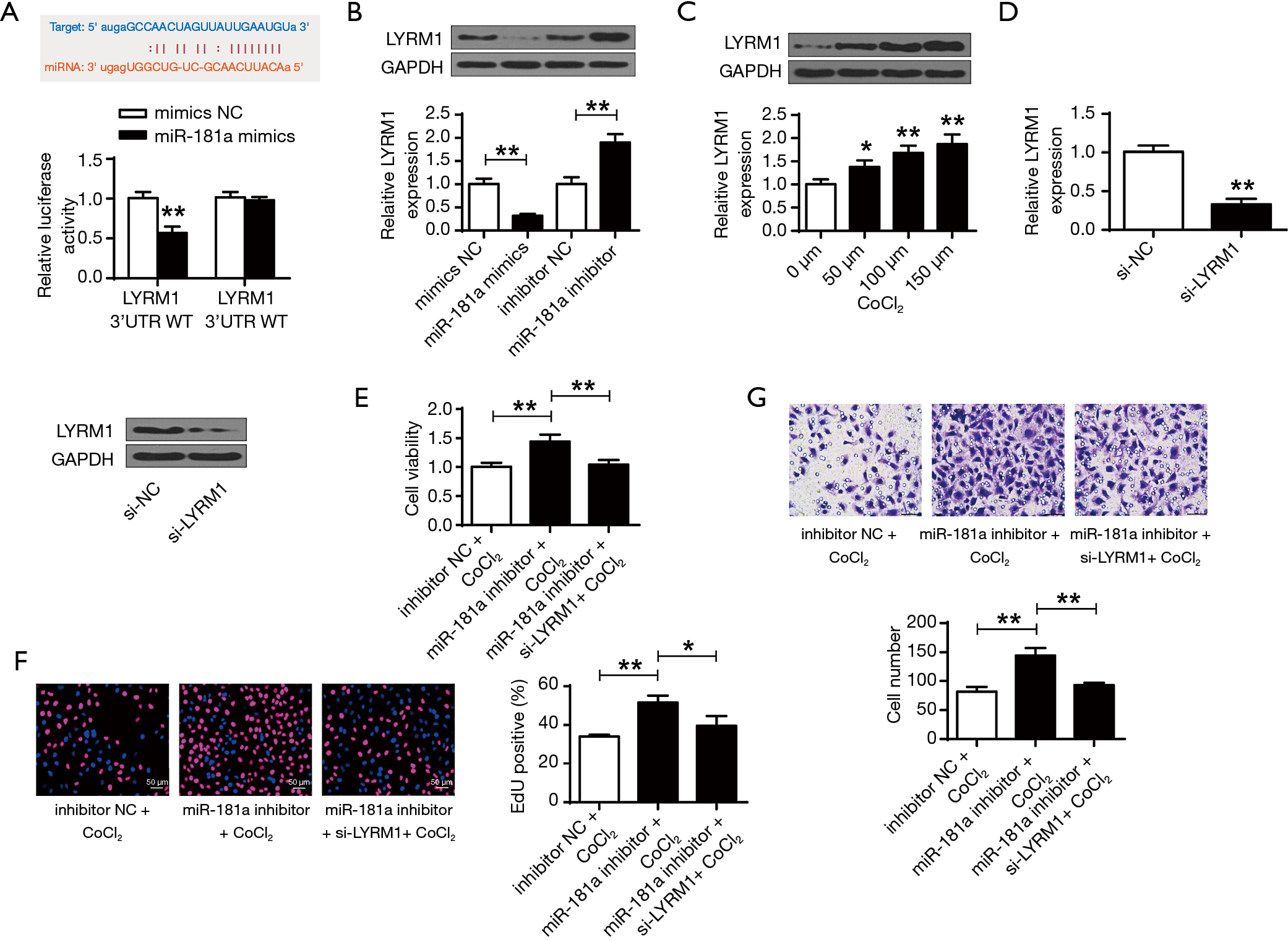 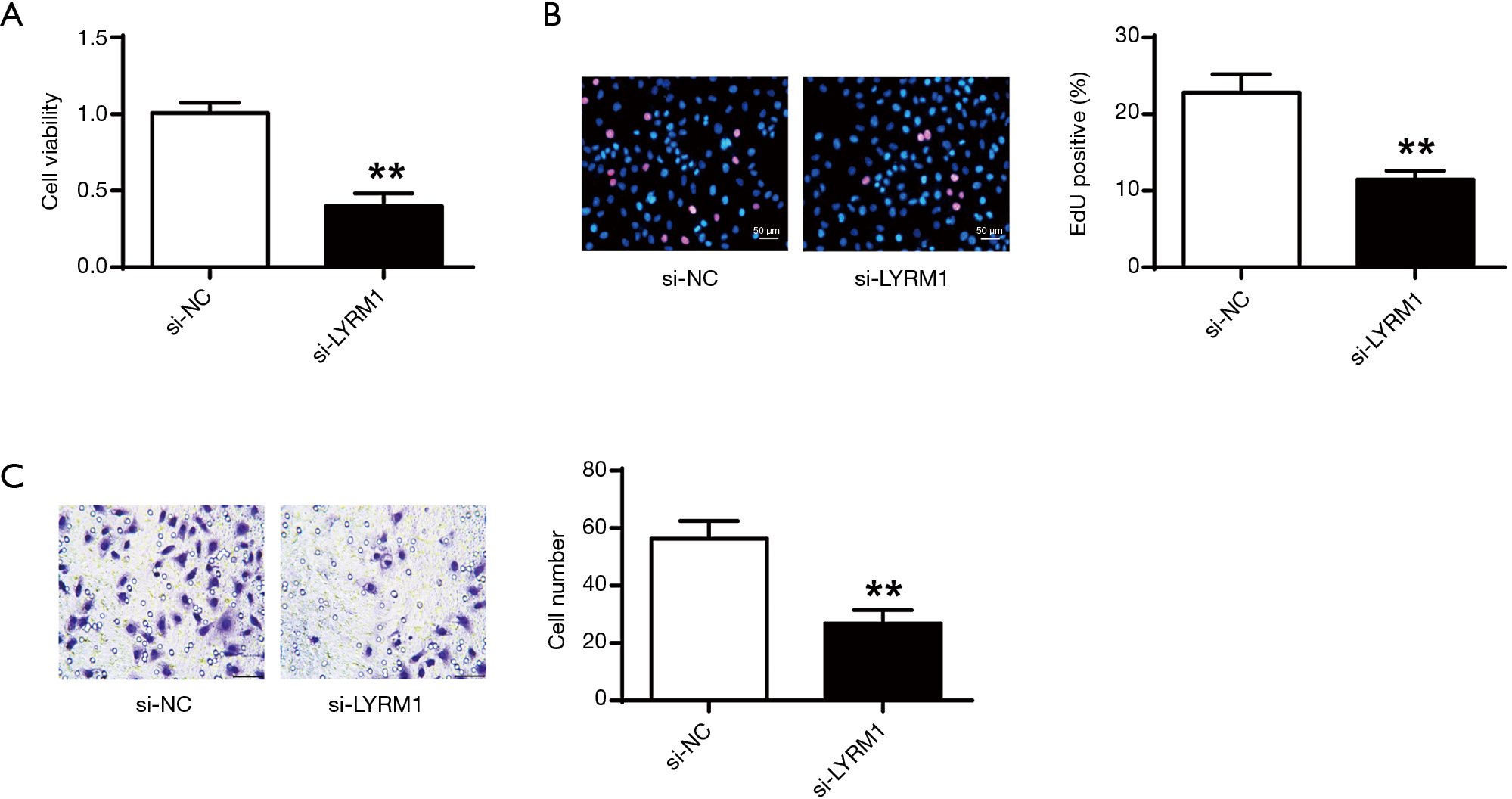 According to Figure 6A, the mRNA and the protein levels of LYRM1 were dramatically reduced after CRNDE suppression (P<0.01). It suggested that LYRM1 was positively correlated with CRNDE. In Figure 6B, cell viabilities were suppressed by si-CRNDE but were elevated by miR-181a-inhibitor. But the addition of si-LYRM1 attenuated this effect. Similarly, we found that CRNDE/miR-181a/LYRM1 axis affected cardiac progenitor cell reproduction (Figure 6C) and migration (Figure 6D) abilities under hypoxic conditions (P<0.01). Overall, our results suggested that CRNDE exerted its roles in modulating cardiac progenitor cell reproductions and migration by upregulation of LYRM1 by targeting miR-181a. 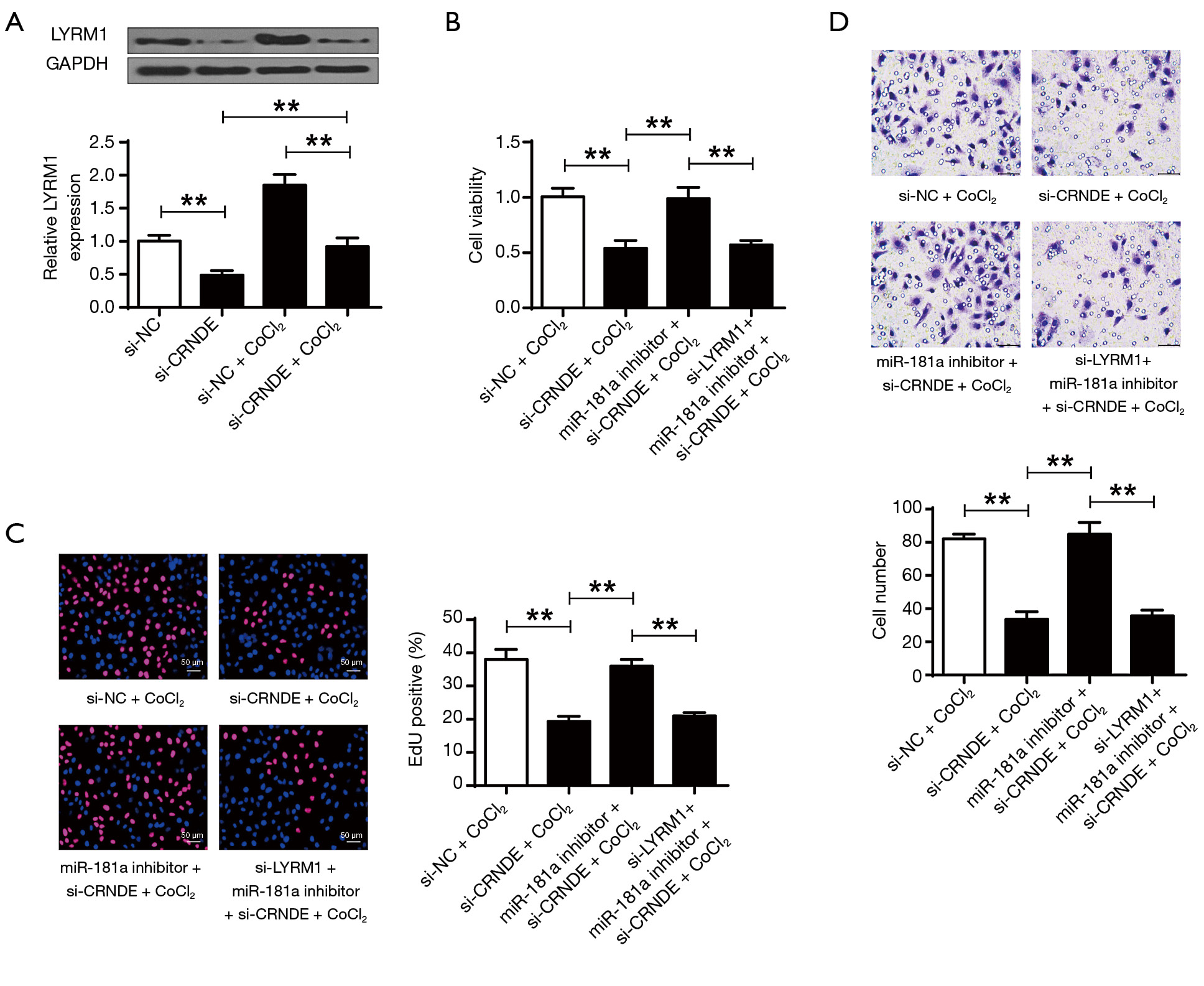 MiRNAs were proved to participate in the regulation of a variety of cellular events such as apoptosis, reproduction, development, and differentiation (24,25). For instance, circulating miR-181a as a potential novel biomarker for diagnosis of acute myocardial infarction. Circulating miR-181a levels in patients with MI were substantially changed in a time-dependent manner, indicating the value of plasma miR-181a as a novel biomarker for diagnosing MI (17). Ji et al. demonstrated that CRNDE enhances hepatocellular carcinoma cell proliferation, invasion, and migration via regulating the miR-203/BCAT1 axis (26). It was shown that CRNDE could bind with some specific miRNAs and exert its biological functions in cellular processes (13,26). In our study, CRNDE suppression could much elevate miR-181a expressions, and miR-181a-mimic inhibited the luciferase activities of CRNDE-WT but didn’t affect the CRNDE-MT. Additionally, miR-181a-inhibitor substantially restored the cell viabilities and abilities of reproduction and migration in cardiac progenitor cells following a CRNDE knockdown under hypoxic stimuli. For the first time, we discovered that CRNDE could regulate cardiac progenitor cell proliferation and migration by targeting miR-181a in hypoxic conditions.

According to Chen, knockdown of LYRM1 substantially inhibited reproduction and differentiation and enhanced apoptosis in an embryonic carcinoma cell model of cardiac differentiation (27). In our experiments, LYRM1 expressions were decreased in cardiac progenitor cells by miR-181a mimic but elevated by miR-181a-inhibitor. MiR-181a mimic substantially repressed the luciferase activities of cell transfected with LYRM1-WT. But miR-181a-mimic didn’t suppress the luciferase activities of LYRM1-MT. It is quite possible that miR-181a could bind with LYRM1. What’s more, LYRM1 knockdown in cardiac progenitor cells under hypoxic conditions repressed cell viabilities, proliferation, and migration abilities that were induced by miR-181a-inhibitor. As far as we know, we are the first to report that miR-181a modulated cardiac progenitor cell functions though LYRM1.

It is well known that lncRNAs can act as competing endogenous RNA (ceRNA) or molecular sponges to exert “sponge-like” effects on many specific miRNAs, resulting to the downregulation of miRNA levels, upregulation of mRNA levels (target genes), and inhibition of miRNA/mRNA-mediated functions (29,30). In this study, the lncRNA CRNDE functioned as a molecular sponge for miR-181a to modulate the expression of LYRM1 under CoCl2-regulated hypoxia conditions. The upregulated CRNDE induced by hypoxia isolates miR-181a by binding with it, thus reducing the regulation of miR-181a on LYRM1 and promoting the expression of LYRM1, and vice versa.

Conflicts of Interest: All authors have completed the ICMJE uniform disclosure form (available at http://dx.doi.org/10.21037/jtd.2020.03.22). The authors have no conflicts of interest to declare.

Ethical Statement: The authors are accountable for all aspects of the work in ensuring that questions related to the accuracy or integrity of any part of the work are appropriately investigated and resolved. All procedures on rats are in accordance with the guidelines of the Animal Ethics Committee of The First Affiliated Hospital of Fujian Medical University.