SCLC has a high proclivity for dissemination to the brain and therefore management of brain metastases in this disease is an important topic (1). The historic standard of care for SCLC for limited and even solitary brain metastases has been whole brain radiation therapy (WBRT). Moreover, preventative WBRT, in the form of prophylactic cranial radiation (PCI), has been traditionally offered in the absence of brain metastases due to the demonstration of improved OS with PCI in landmark studies (2,3). However, WBRT has consistently been associated with neurocognitive toxicities and, as a result, in other histologies WBRT has largely been replaced by a strategy of upfront stereotactic radiosurgery (SRS) for limited brain metastases. As systemic therapies for SCLC are improving (4-6) and the contemporary OS advantage of PCI has been challenged by strategies involving brain MRI surveillance and early salvage therapy for brain metastases (7,8), interest in the potential role of SRS in carefully selected SCLC patients is likely to grow (9).

The evolution of SRS for brain metastases from other histologies

Multiple prospective randomized trials have compared a strategy of SRS alone to SRS plus WBRT and have demonstrating that, while WBRT offers consistent improvement in CNS control, WBRT does not offer an improvement in overall survival (OS) over SRS alone (10-14). What’s more, the superior CNS control achieved with WBRT appears to come at the cost of inferior cognitive performance and patient-reported QOL. In one of the first landmark trials to compare SRS to SRS plus WBRT, Aoyama et al. enrolled 132 patients in a multicenter Japanese study comparing SRS to SRS and WBRT for 1–4 brain metastases and demonstrated an improvement in CNS control but no significant differences in OS with the addition of WBRT (10). The EORTC later completed a similar study comparing WBRT to observation after local therapy with either SRS or surgical resection and similarly reported improvement in CNS progression with the addition of WBRT, but no difference in OS (14). In this study receipt of WBRT was also associated with a decrement in some areas of health-related quality-of-life (HRQOL) (15). Chang et al. conducted a single-institution phase III study of SRS alone versus SRS and WBRT for patients with 1–3 brain metastases with cognitive function as the primary endpoint. The study was stopped early by the data safety monitoring committee after a decline in cognitive function was observed in the WBRT arm at 4-month (13). Brown et al. then conducted two studies through the NCCTG that also assessed cognitive function in patients receiving WBRT and/or SRS. In the first study patients with 1–3 intact brain metastases were randomized to SRS alone or SRS and WBRT and in the subsequent study, patients with resected brain metastases were randomized to postoperative SRS to the surgical cavity or WBRT (11,12). In both studies WBRT was associated with cognitive decline, worse quality-of-life, and again there were no significant differences in OS. Importantly, cognitive decline was also assessed at a later time point in long-term survivors and a persistent decrement to cognitive function with WBRT was observed (11).

In response to the consistent results of these randomized trials demonstrating improved CNS control, inferior cognitive function and QOL, and no significant differences in OS with the addition of WBRT, SRS became the guideline-endorsed standard for limited brain metastases arising from most tumor histologies (16). However, patients with SCLC were excluded from these practice-changing trials and, as a result, WBRT has remained the standard of care for SCLC brain metastases. However, in response to emerging retrospective data discussed below, the contemporary National Comprehensive Cancer Network (NCCN) SCLC treatment guidelines now acknowledge SRS as a potential treatment option for carefully selected SCLC patients with a small number of brain metastases (4). 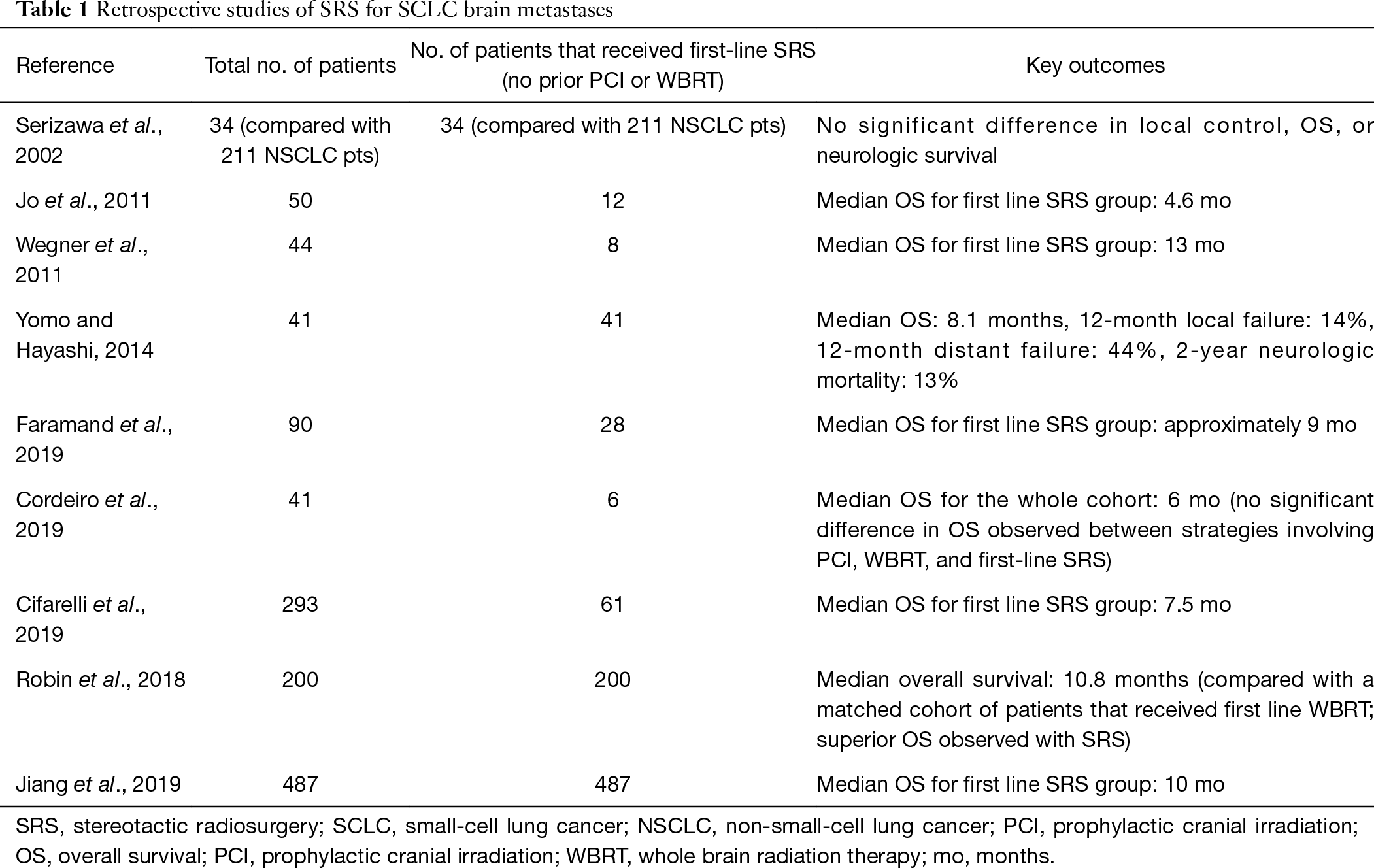 Two national cancer registries studies have evaluated the outcomes after first-line SRS for SCLC brain metastases. Our group queried the national cancer database (NCDB) for patients with brain metastases at diagnosis and compared the outcomes after upfront SRS versus upfront WBRT with or without SRS. Upfront SRS was associated with superior OS on multivariate and propensity-score matched analyses. Although the survival advantage with SRS in this retrospective study may be related to patient selection and uncontrolled confounding, it does suggest that first-line SRS may be a reasonable option for some SCLC patients (23). Jiang et al. subsequently utilized the NCDB to present a patterns of care analysis of patients with SCLC that received CNS-directed radiation therapy. These investigators observed a slight increase in SRS utilization during the study period [2004–2013]. SRS use was associated with later study years, socioeconomic factors, treatment at an academic center, and residing in higher-educated regions (24).

Clarifying the role of first-line SRS in SCLC is likely to become more important going forward for several reasons. First, although PCI has historically been associated with improved survival (2,3), these studies were largely performed in the pre-MRI era and utilized heterogenous staging and surveillance (7), whereas the OS benefit of PCI in the modern era of brain MRI surveillance and early salvage therapy was recently challenged by a Japanese phase 3 trial in extensive-stage SCLC (8). As a result, the NCCN SCLC guidelines now recommend MRI surveillance for both limited and extensive-stage SCLC patients (regardless of PCI status) and the guidelines have changed PCI from a category-1 recommendation to an optional therapy for extensive stage SCLC (4). As a result of increased MRI surveillance and decreases in PCI administration, limited asymptomatic brain metastases will be identified more frequently in SCLC patients and more patients will be potential candidates for first-line SRS without prior brain radiation. Second, as immunotherapy becomes increasingly integrated into SCLC management following the positive results of phase 3 trials in ES-SCLC (5,6), improving prognoses in SCLC may increase the value of avoiding the long-term cognitive sequelae of radiation to the entire brain. Third, if advances in immunotherapy and other emerging systemic therapy agents can demonstrate enhanced CNS activity, as observed with other tumor histologies (25-27), systemic therapy could help to control occult microscopic CNS disease that was previously only achievable with PCI and WBRT.

While the small reports detailed above provide preliminary evidence in support of first-line SRS for SCLC brain metastases, importantly there are multiple ongoing studies in this area. Our group is leading the First-line Radiosurgery for Small-Cell Lung Cancer Brain Metastases (FIRE-SCLC) study through the IRRF to describe the outcomes with first-line SRS for SCLC brain metastases in a large international multicenter cohort (https://www.irr-f.org/retrospective-trials-in-progress.html). The German ENCEPHALON study is a randomized phase II trial of WBRT versus SRS for 1–10 SCLC brain metastases (NCT03297788). A single arm phase II study being conducted at the Dana Farber Cancer Institute is studying SRS for patients with 1-6 SCLC brain metastases (NCT03391362). A recently activated phase 3 trial, SWOG S1827/MAVERICK (NCT04155034) is evaluating MRI surveillance with and without PCI in both limited and extensive stage SCLC. This trial is open across the National Clinical Trials Network (NCTN) cooperative groups including SWOG, Alliance, NRG, ECOG, and the CCTG, and will allow and track outcomes for salvage SRS and WBRT for brain metastases.

SRS has become the accepted standard for the management of CNS metastases arising from most tumor histologies, whereas WBRT has remained the standard of care for limited and even solitary SCLC brain metastases due to the exclusion of SCLC patients from landmark randomized trials. The primary concern with first-line SRS in SCLC has been the concern for short-interval progression and potential decrease in OS if WBRT is omitted. However, there is now a growing body of literature to suggest that not all patients with SCLC manifest rapid CNS progression and that some patients may be safely and effectively managed with first-line SRS, and this has led to the launch of several prospective trials of first line SRS in SCLC. In light of the forerunning literature of SRS with and without WBRT in other tumor histologies, it is reasonable to suspect that omitting upfront WBRT will be associated with a decrease in CNS control in SCLC as well. However, similar to other settings, clinicians and SCLC patients may ultimately be willing to accept a shorter time to new brain metastases if SRS can demonstrate less toxicity and comparable OS in prospective trials.

Provenance and Peer review: This article was commissioned by the Guest Editor (Jose M. Pacheco) for the series “Small Cell Lung Cancer”, published in Journal of Thoracic Disease. This article has undergone external peer review.

Conflicts of Interest: Both authors have completed the ICMJE uniform disclosure form (available at http://dx.doi.org/10.21037/jtd.2020.03.90). The series “Small Cell Lung Cancer” was commissioned by the editorial office without any funding or sponsorship. CGR reports that he is the national principle investigator of SWOG S1827/Maverick: MRI Brain Surveillance Alone versus MRI Surveillance and Prophylactic Cranial Irradiation (PCI): A Randomized Phase III Trial in Small-Cell Lung Cancer. The other author has no other conflicts of interest to declare.