Esophagus cancer is the sixth most common cause of cancer deaths worldwide (1). Esophagectomy following by lymphadenectomy, is the best choice for resectable disease (2,3). However, it is a highly invasive surgical procedure. Even though the improvements in surgical techniques and perioperative management, the postoperative anastomotic leakage rate remains high (4,5). Several factors have been suggested to be the risk factors for anastomotic leakage (6-8). However, the preoperative condition of the esophagus itself has been ignored or seldom studied. Although an enhanced computed tomography (CT) scan could help us evaluate the clinical T and N stage, the value of barium esophagography in the evaluation of the morphology changes of the esophagus is irreplaceable (9-11). We observed a dominant dilation of the esophagus above the tumor on the esophagography in some esophageal cancer patients in daily clinical work. We previously reported that preoperative cancerous stenosis correlated to poor prognosis in esophagus cancer patients (12). The longer or more severe the stenosis was, the more stimulation from the food the esophagus above the tumor would suffer. The occupation of the food may finally result in the dilation of the esophageal lumen.

A retrospective study of clinical records of patients who underwent esophagectomy following by intrathoracic gastroesophageal anastomosis from six esophagus surgery medical groups in West China Hospital between January 2014 and December 2017 was performed. The study was approved by the institutional review board of West China Hospital, Sichuan University (No. 20180321). The inclusion criteria were: (I) patients suffered from esophageal squamous cell carcinoma; (II) the anastomosis was performed within the thoracic cavity using 25 mm circular stapler; (III) patients underwent barium esophagography within one month before surgery. The exclusion criteria were: (I) tumors originated from cardia; (II) patients with a positive resection margin after surgery. Patients with postoperative endoscopy or barium esophagography confirmed anastomotic region leakage was assigned to leakage group (LG), while those without the supporting evidence were assigned to no leakage group (NLG). 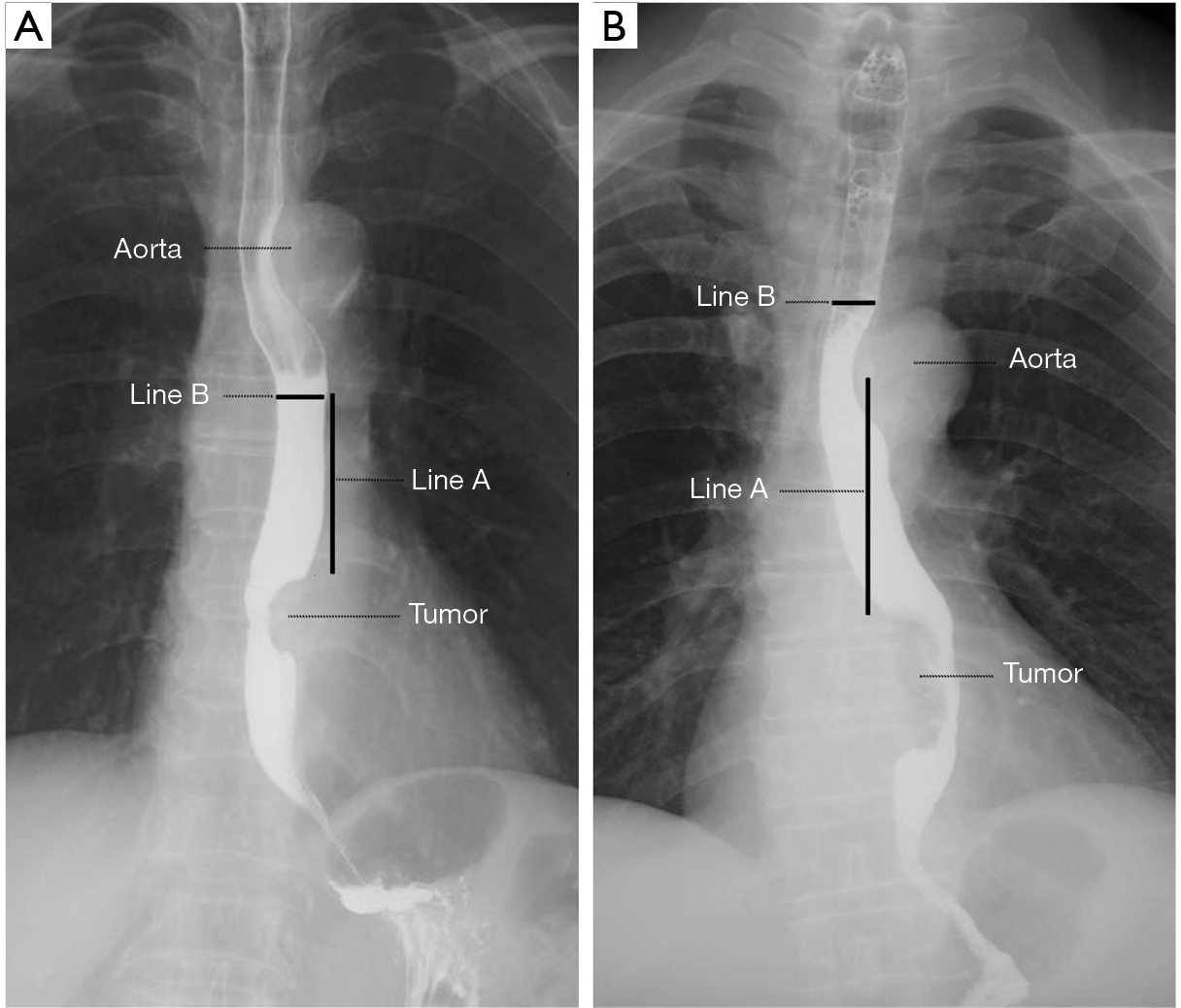 The statistical analyses were performed using SPSS 22.0 (IBM, Armonk, NY, USA). A Student’s t-test was applied to compare the continuously distributed data. Chi-squared test or Fisher’s exact test was applied to dichotomous data, while Mann-Whitney non-parametric U-test was used in the comparison of multi-classification data. The receiver operating characteristic (ROC) curve was used to confirm the cutoff value. A multivariate logistic regression analysis was conducted to identify the factors significantly correlated to the anastomotic leakage. Spearman’s correlation test was used in the detection of the correlation between two variables. P values of less than 0.05 were considered statistically significant.

Over the past four years reviewed, there were 961 patients undergoing esophagectomy following by intrathoracic anastomosis from the six medical groups. Among them, 851 patients underwent esophagectomy for squamous cell cancer of the esophagus. Then, 167 patients were excluded for hand-sewn anastomosis and another 249 patients for no barium esophagography before surgery. Three patients with a positive surgical margin were also excluded. Finally, 432 patients were enrolled in the study. All the anastomoses were accomplished using a 25 mm circular stapler. Thirty-one patients (7.2%) with endoscopy or barium esophagography confirmed anastomotic region leakage was assigned to LG. And the left 401 patients were enrolled in the NLG.

The baseline characteristics of patients enrolled in the study was shown in Table 1. No statistically significant difference was detected between LG and NLG in gender (P=0.962), BMI (P=0.255), smoking history (P=0.718), alcohol consumption history (P=0.703), duration of dysphagia (P=0.528), neoadjuvant therapy (P=0.312), surgery type (P=0.321), maximum size of the tumor (P=0.377), anastomosis position (P=0.986), pathologic T stage (P=0.291), pathologic N stage (P=0.632) and pathologic TNM stage (P=0.576). The surgeon A and B performed over one hundred surgeries, while the left 128 surgeries were performed by the other four surgeons. The incidence of anastomotic leakage was comparable among the six surgeons (P=0.967). The LG seemed to include elder patients, but it didn’t show a statistic difference (P=0.082). More patients in LG had diabetes (12.9% vs. 4.5%), but it also didn’t reach statistic difference (P=0.064). However, LG had a significantly higher prevalence of hypertension (54.8% vs. 18.0%, P<0.001). Although in both the filling phase and the mucosal phase, LG had a greater mean intraluminal diameter than NLG, the difference only reached statistically significant in mucosal phase (P=0.01).

As the ROC curve (Figure 2) showed, the optimal cutoff value for IMPD was 1.79 cm, with an area under the curve (AUC) of 0.63. Its sensitivity was 64.5%, and the specificity was 60.3%. The anastomotic leakage rate was 4.3% in patients with an IMPD of less than 1.79 cm, while 11.2% in patients with an IMPD greater than or equal to 1.79 cm. And the difference reached statistically significant (P=0.007, P value from univariate logistic regression analysis). 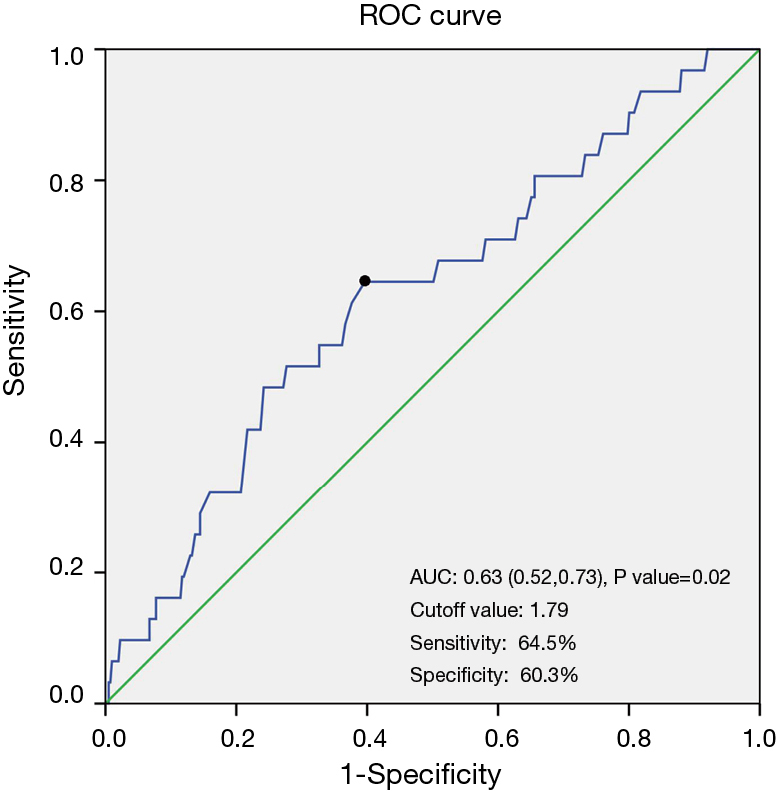 Then, we compared the leakage rate in subgroups with escalating IMPD. We found that as the escalation of the IMPD, the leakage rate also tends to increased (Table 2). The 1.79 cm as the cutoff value was quite an important turning point beyond which the leakage rate would almost triple (from 4.27% to 11.20%). What’s more, the leakage rate remained high in patients with an IMPD over 2.29 cm (11.11%). The dominant difference among the four subgroups in the leakage rate supported the patient with a dilated IMPD was more likely to suffer from the anastomotic leakage. 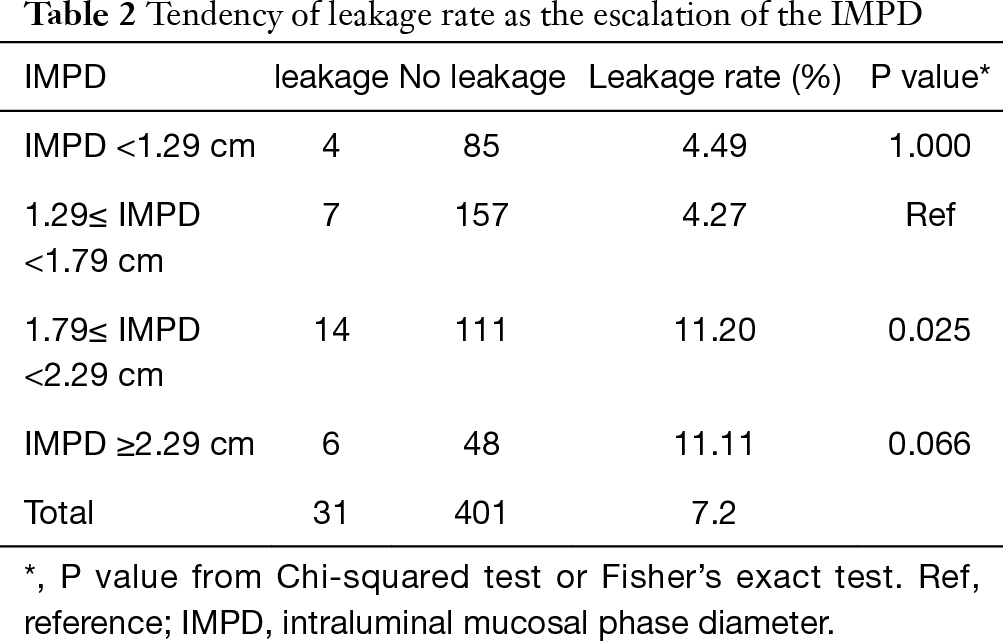 To further prove the dilated IMPD was an independent risk factor for the development of anastomotic leakage, a multivariate logistic regression analysis was performed. Factors with a P value of less than 0.1 in the baseline comparison (Table 1) were included in the analysis. The results of the multivariate analysis were showed in Table 3. The statistic difference remained significant in history of hypertension (OR =5.27, 95% CI, 2.35, 11.85, P<0.001) and IMPD over 1.79 cm (OR =3.16, 95% CI, 1.42, 7.03, P=0.005). So the multivariate analysis supported the dilated IMPD as a novelly-identified independent risk factor of anastomotic leakage. 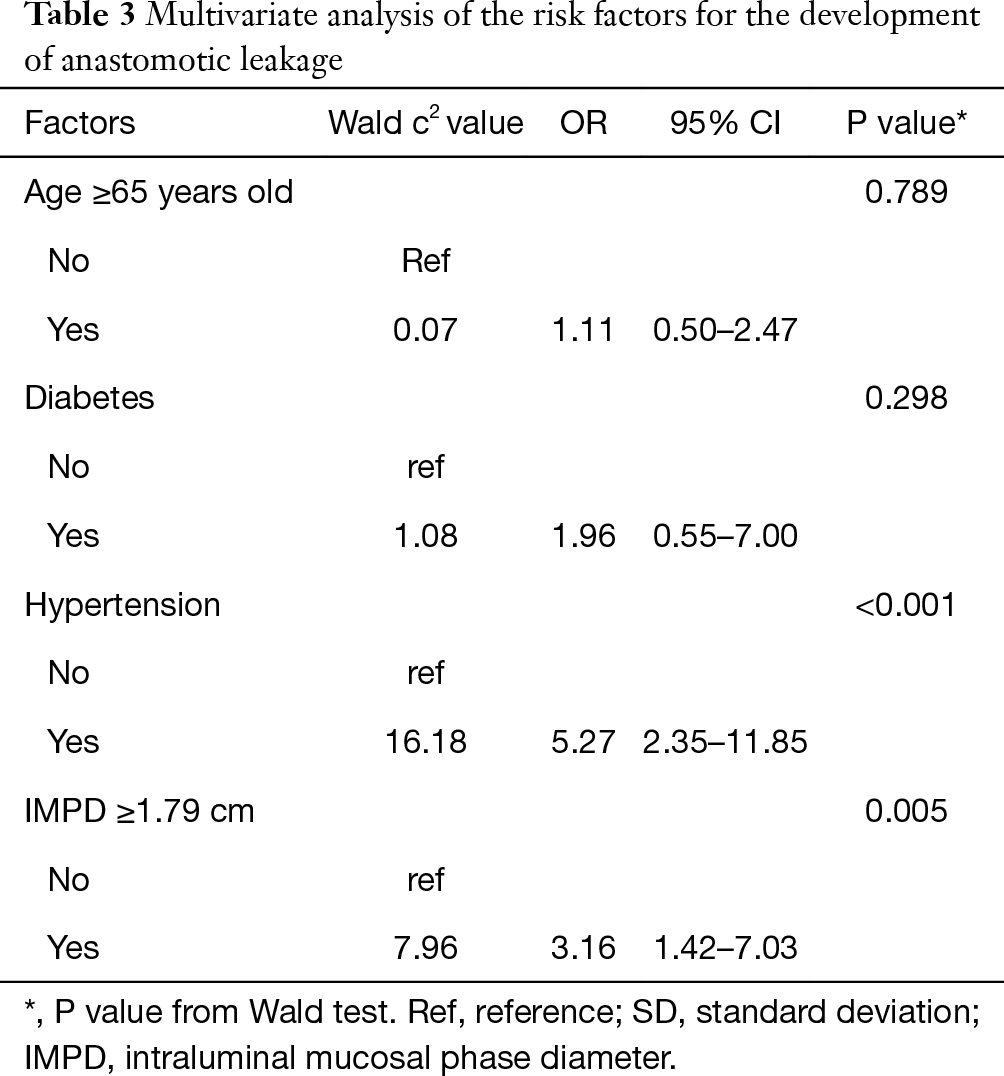 Factors correlated to the dilated IMPD 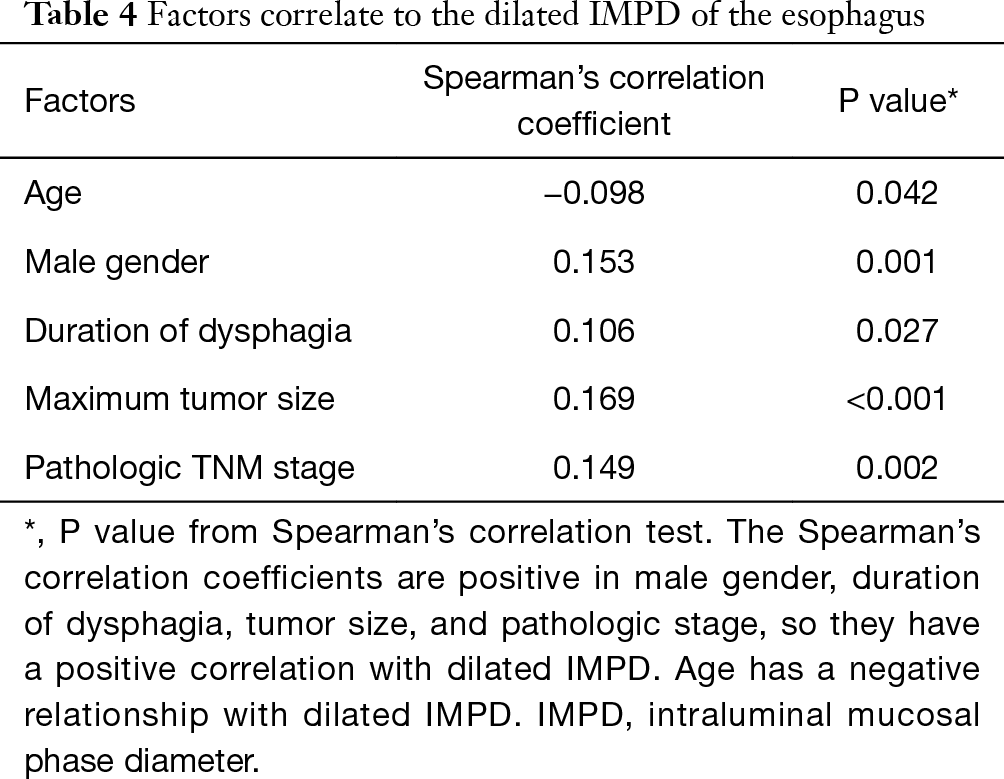 Our study, for the first time, demonstrated that the dilation of IMPD was a novel risk factor of anastomotic leakage after intrathoracic anastomosis using a 25 mm circular stapler in patients with esophageal squamous cell carcinoma. The ROC curve indicated 1.79 cm as the cutoff value for IMPD. The leakage rate almost tripled around 1.79 cm, and the difference in leakage rate between patients with an IMPD higher than 1.79 cm and less than 1.79 cm reached statistically significant. What’s more, as the escalation of the IMPD, the leakage rate significantly increased. And in the multivariate analysis, IMPD higher than 1.79 cm also had been proved to be a risk factor of anastomotic leakage.

IFPD failed to be a risk factor in this study. IFPD was mainly affected by the amounts of barium the patients had swallowed during the barium esophagography. On the other hand, IMPD cannot significantly be affected by the amounts of barium swallowed down. So IMPD can precisely represent the natural status of the esophageal lumen. We, therefore, believed that IMPD was more reliable in judging the status of esophageal lumen than IFPD. The correlation analysis showed the dilated IMPD related to the age, gender, duration of dysphagia, maximum size of the tumor and pathologic stage closely. But in the multivariate logistic regression analysis, they were not risking factors of anastomotic leakage, indicating that IMPD was an integrated parameter of all these factors. The piled effects of these factors made the IMPD more meaningful than a single factor. Long duration of dysphagia, the large size of the tumor, and the late pathologic stage reflect the long affection of cancer on the esophagus. The accumulation of affection finally leads to the dilation of the esophagus.

Hypertension was also recognized as a risk factor of anastomotic leakage in our study. Hypertension may result in the low flow or inadequate perfusion of the anastomosis site which further delays the repairmen of the damaged esophagus (15). A retrospective study with a large sample size has reported the positive relationship between hypertension and anastomosis leakage. However, hypertension has seldom been reported independently in other studies. Most studies regard it as part of cardiovascular disease. From our results, we think hypertension as preoperative comorbidity should be reported independently.

Esophagography, although an old test, remains important in the detection of anatomic abnormities and assessment of the motility of the esophagus (11). The CT scan only provides us with the cross-section of the body, so it is unable to observe the esophagus as an entirety. This makes it hard to locate a specific site of the esophagus. The reason why we measured the diameter at 5 cm above the upper margin of the tumor has been described in the methods part. So the accurate locating is very important in the study. And the esophagus is empty when the patient undergoes the CT scan. What’s more, the patient is in a supine position during the CT scan. Under this body position the esophagus may further be compressed by the lung and mediastinum. We can only get the length of a long axis of an oval using the CT scan. Compare to the CT scan, the esophagography provides us an overall view of the esophagus when the esophagus is on functional status. It continues to be the primary radiologic modality for the evaluation of patients with dysphagia, reflux symptoms, or other clinical findings of esophagus diseases (16). Barium or other contrast swallow esophagography was routinely used in the detection of anastomotic leakage after esophagectomy in many hospitals (17,18). But the value of the examination before surgery limits to the locating of the tumor in most time. Its values in the evaluation of morphological changes of the esophagus are often underestimated by the surgeons. So does our hospital, 36.4% of patients didn’t have the barium esophagography before surgery in this study. Our findings in this study may attract the new look from thoracic surgeons at the values of the old examination in esophagus cancer patients.

This was a retrospective study, and the sample size in the LG was small with only 31 patients. Nonetheless, we firstly reported the dilated IMPD of the esophagus by barium esophagography as a risk factor of anastomotic leakage after intrathoracic anastomosis by 25 mm circular stapler for esophageal squamous cell carcinoma. And the method we worked out in the measure of the internal diameter of the esophagus is scientific and reliable. Prospective studies with larger sample size are needed to further test our results. The studies focus on histopathological changes of the dilated esophagus tissues or studies that apply a calibrated circular stapler of appropriate sizes to accomplish the anastomosis may finally explain the underlying mechanisms of our findings.

We would like to thank Mr. Shi-De Wu from the High School Attached to Northeast Normal University for his linguistic assistance to this manuscript.

Conflicts of Interest: All authors have completed the ICMJE uniform disclosure form (available at http://dx.doi.org/10.21037/jtd.2020.03.99). The authors have no conflicts of interest to declare.

Ethical Statement: The authors are accountable for all aspects of the work in ensuring that questions related to the accuracy or integrity of any part of the work are appropriately investigated and resolved. The study was approved by the institutional review board of West China Hospital, Sichuan University (No. 20180321).