Are there common threads in the susceptibility to cancer and tuberculosis?

Similarities in host immunity toward both cancer and pathogenic microbes are increasingly noted (1). While there are likely to be phenotypic distinctions between host defense against cancer and microbes—given the myriad of cancer types and thousands of microbes—it makes intuitive sense that the same immune cells and mechanisms may participate in combatting both. Untreated acquired immune deficiency syndrome (AIDS) is a natural example of this paradigm wherein depletion of CD4+ T cells increases the risk of both cancer (e.g., Kaposi sarcoma, non-Hodgkin and Hodgkin lymphoma, and cancer of the oral cavity, lung, liver, cervix, and anus) and pathogenic/opportunistic infections. In another example, T effector cells play an important role against chronic infections such as tuberculosis (TB), and also protect against cancer, as evinced by the development of checkpoint inhibitors against various malignancies.

In this issue of the J Thoracic Dis, Cheon and colleagues (2) analyzed a large database of ~35,000 cancer patients and ~70,000 age- and gender-matched controls to determine the incidence of TB within the following three years after enrollment. They found that those with known cancer were much more likely to develop TB (380/34,783) than those without (79/69,566), yielding TB incidence rates of 535/100,000 person-years for cancer patients and 37/100,000 for non-cancer patients. Certain cancers were particularly noteworthy to be associated with high rates of future TB, including esophageal cancer, multiple myeloma, lung cancer, pancreatic cancer, leukemia, head and neck cancer, and lymphoma. In a TB endemic country like Korea, the greater than 10-fold incidence of active TB cases in cancer patients are likely due to both reactivation TB and primary progressive TB.

What could be some mechanisms by which having cancer predisposes to TB (Figure 1)? 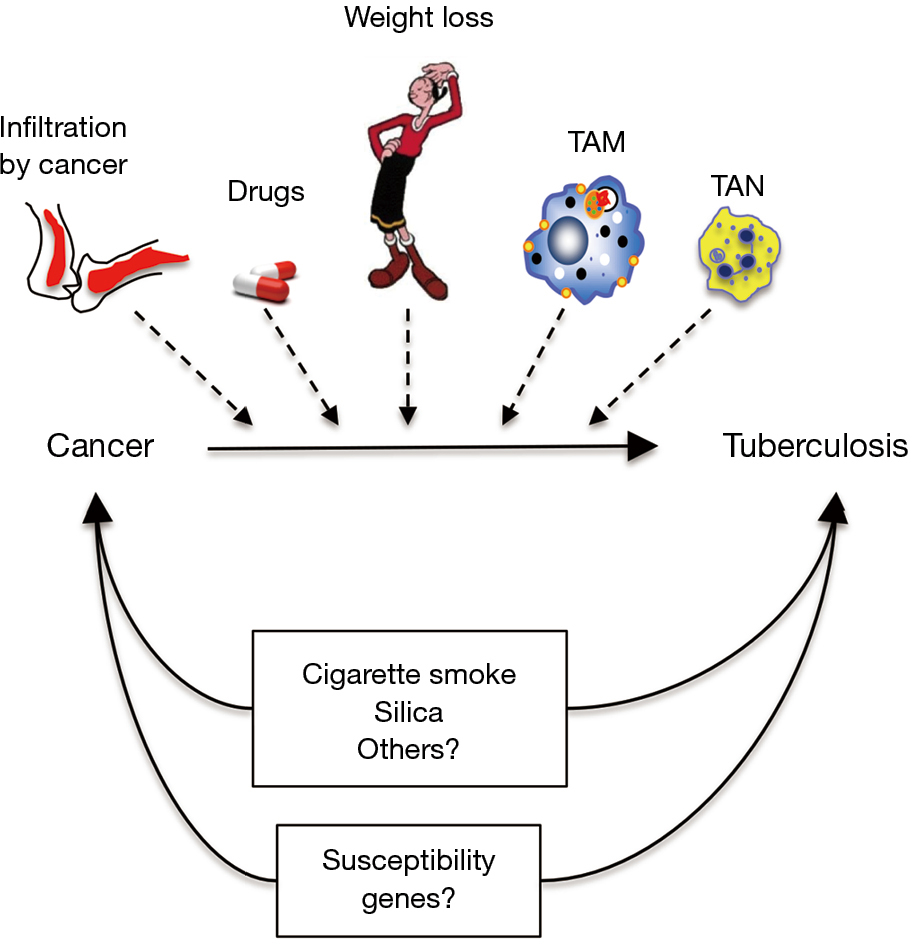 Figure 1 Mechanisms by which cancer and factors associated with cancer may predispose to tuberculosis (TB). Infiltration of bone marrow by cancer cells causing immune cell cytopenias, immunosuppressive drugs, loss of body fat resulting in decreased leptin and enhanced downstream immunosuppressive effects, tumor-associated macrophages (TAM), and tumor-associated neutrophils (TAN) may all predispose to TB. In addition, certain exposures such as cigarette smoke and silica may predispose to both cancer and TB independently. Given the overlap between host defense against cancer and TB, host susceptibility genes to both disorders may also exist in some individuals.

An obvious possibility is due to immunosuppression from the cancer itself (e.g., infiltration of lymphoid organs and bone marrow with cancer) and from the chemotherapeutic agents that cause immunosuppression by inducing various immune cell cytopenias. But what about the checkpoint inhibitors such as the anti-programmed death-1 (PD-1) antibody, anti-cytotoxic T-lymphocyte associated protein 4 (CTLA-4) antibody, and anti-PD ligand-1 (PD-L1) antibody? PD-1 and CTLA-4, upon binding to their ligands PD-L1 (present on both antigen-presenting cells and tumor cells) and B7 (present on antigen-presenting cells), serve to dampen (“check”) T effector cell activation. Thus, the checkpoint inhibitors (anti-CTLA-4, anti-PD-1, and anti-PD-L1) would serve to activate T cells against cancer. Indeed, these checkpoint inhibitors have shown good efficacy against previously unresponsive cancers such as melanoma. Given their mechanism of action, it would seem that use of these agents would be less predisposing to opportunistic infections and perhaps even protective against infections such as TB; however, this is controversial as few cases of TB have been reported with the use of such agents (3). Furthermore, based on the paradigm that checkpoint inhibitors activate the immune system, one would expect the PD-1 knockout mice would be more protected from experimental Mycobacterium tuberculosis (MTB) infection, and yet three studies showed they actually had worse outcome (4-6). One possible explanation for this paradoxical phenomenon is that mice with complete disruption of PD-1 have excessive inflammation causing detriment to the host but that partial PD-1 inhibition would be beneficial to the host in combatting MTB (7-9). Indeed, one of the major side effects of the checkpoint inhibitors is the development of excessive immune response as evinced by the development of various autoimmune diseases such as type 1 diabetes mellitus, autoimmune thyroiditis, colitis, etc. This checkpoint inhibitor-induced autoimmune disease is likely due to both enhanced T effector function but also decreased Treg function since PD-1 and CTLA-4, while inhibiting T effector cell function or inducing T cell exhaustion, are known to activate Tregs.

Another possibility is not due to the cancer per se but to a common environmental exposure predisposing to both independently. One prime example is cigarette smoke (CS) exposure, the major risk factor for lung cancer but also cancer of the head and neck, esophagus, stomach, pancreas, liver, kidney/bladder, and cervix/ovaries as well as acute myeloid leukemia. Perhaps less well appreciated is that CS exposure is a risk factor for primary MTB infection, active TB, more severe TB, and greater mortality from TB (10). These epidemiological associations have been corroborated in in vitro experiments with CS-exposed or nicotine-exposed macrophages and MTB infection (11) as well as in vivo murine experiments, wherein mice exposed to CS are significantly more susceptible to MTB (12-14). In similar context, long-term exposure to outdoor air pollution and biomass fuel exposure may be a risk factor for both cancer (lung, bladder, childhood leukemia and possibly kidney and colon) (15) and TB (10). Peripheral blood mononuclear cells incubated with particulate matter with aerodynamic diameters ≤2.5 µm (PM2.5) impaired the ability to control MTB infection as well as reduced interferon-gamma (IFNγ) and tumor necrosis factor-alpha (TNFα) expression and increased interleukin-10 (IL-10) production in CD3+ T cells (16). However, others have not found an association between indoor air pollution—mainly from biomass fuel smoke exposure—and self-reported, previous TB (17). There are likely to be other environmental exposures that could increase the risk of both cancer and TB; e.g., silica exposure increases the risk of both lung cancer and TB (18).

Cancer-associated weight loss is a well-known phenomenon and this may be another mechanism by which cancer predisposes to TB. Weight loss may be due to the cancer itself but also from nausea, vomiting, and decreased caloric intake often associated with chemotherapy. It has long been observed—in the times of Hippocrates—that TB is more likely to develop in those with asthenic body habitus. Three very large studies—comprised of 67,000, 800,000, and 1.7 million subjects—showed that body weight is inversely related to the incidence of active TB (19). One possible clue for this inverse relationship between body weight and TB is the juxtaposition of fatty tissues and lymph nodes; i.e., lymph nodes are often invested in fat. Adipocytes produces leptin, a satiety hormone but also functions to help differentiate undifferentiated T cells toward the IFNγ-producing TH1 phenotype, a cell type that affords protection against TB. Indeed, a study from Hong Kong showed that obese individuals are significantly less likely to develop active TB (20). We also showed that the leptin-deficient mice—phenotypically obese due to insatiable appetite but have thymic atrophy, reduced splenic weight, and reduced circulating lymphocytes—are more susceptible to MTB (21). Thus, mere weight loss from cancer and/or side effects from treatment may be an important risk factor for development of active TB.

Innate immune cells such as macrophages and neutrophils may infiltrate the tumor microenvironment—the so-called tumor-associated macrophages (TAM) and tumor-associated neutrophils (TAN) (22,23). The TAM are similar to the “wound-healing” or M2 type of macrophages and secrete immunosuppressive cytokines such as IL-10 and transforming growth factor-beta (TGFβ). Infiltration of TAM in tumors promotes tumor growth, invasion, and metastases and is also associated with reduced patient survival (22). Based on their immunosuppressive phenotype, these TAM would be also expected to increase vulnerability to TB (24). There are also several neutrophil phenotypes, including the N2 TAN that secrete TGFβ and promote tumor growth (23) and would also be expected to impair host immunity against TB.

Activation of nuclear factor-kappa B (NF-κB) in cancer cells is one mechanism by which cancer cells are resistant to undergoing apoptosis; i.e., NF-κB is generally anti-apoptotic (18). Since we showed that NF-κB activation may inhibit autophagic flux in macrophages, impairing control of MTB, it is possible that widespread activation of NF-κB—to also include macrophages—may be a host evasive mechanism by both cancer cells and MTB. However, it is important to stress that NF-κB is a canonical pro-inflammatory transcription factor needed for the production of host-protective cytokines such as TNFα and IFNγ; thus, the extent, timing, and perhaps which isoform of NF-κB is activated plays an important role in determining its deleterious and salubrious effects. While apoptosis has been shown to be host protective mechanism against MTB, this is in the context of MTB-infected macrophages and thus a lack of apoptosis per se would—at least on the surface—not be a common mechanism predisposing to cancer and TB.

Many cancer cell types undergo aerobic glycolysis metabolism, also known as a Warburg effect and clinically observed by increased 18F-deoxyglucose uptake in positron emission tomography (PET) scan. Others have shown that in both macrophages and mouse lungs that undergo aerobic glycolysis are better able to control MTB infection (26). Thus, the Warburg effect would protect cancer cells but be deleterious against MTB. Thus, the presence of the Warburg effect in cancer would not predispose the host to TB but may actually be protective against TB.

Conflicts of Interest: The author has completed the ICMJE uniform disclosure form (available at http://dx.doi.org/10.21037/jtd.2020.03.114). EDC serves as an unpaid editorial board member of Journal of Thoracic Disease from Dec 2018 to Nov 2020.