In surgical lung cancer therapy, to evaluate the details of another lung disease is one of the essential factors to accurate treatment policy. The Global Initiative for Chronic Obstructive Lung Disease (GOLD) guidelines define chronic obstructive pulmonary disease (COPD) is a disorder characterized by persistent respiratory symptoms and airflow restriction. The World Health Organization predicts that COPD will be the third leading cause of death in the world by 2030 (1); moreover, 3 million people died of COPD in 2016 (2).

Akamine et al. focused on patients who had never smoked. They reported the patients with obstructive lung disease (OLD) who were operated for lung cancer in their single institution and revealed OLD was an independent negative prognostic factor of lung cancer survival in never smokers (7).

They retrospectively examined 244 never-smokers and 304 smokers with surgically resected non-small cell lung cancer (NSCLC) from January 2003 to December 2014. Other causes of death or death within 30 days after surgery were eliminated. OLD is defined based on the preoperative spirometry test score of the forced expiratory volume in 1 second (FEV1)/forced volume vital capacity (FVC) ratio is less than 70%.

Cancer-specific survival (CSS), age, pathological status, vascular invasion, and OLD were independent predictive factors of never smoker patients. In recurrence-free survival, there is no association with CSS and OLD patients with smoking history. In overall survival, OLD was a predictive risk factor, particularly in never smokers.

They emphasized their report is important because they focused on never smoked patients with NSCLC patients are increasing, and the new facts are revealed firstly.

The possibility of the original mechanisms of lung cancer with OLD in never smokers was discussed, and the PI3KCA gene is possibility to be a distinctive feature of NSCLC patients with OLD even in case of never smokers, although it remains to be investigating. As another factor, low socioeconomic status can be effect imbalance in lung cancer survival. Because despite the adjustment of prognosis for gender or age, OLD still reveled poor prognosis.

One of the limitations of the study is including untreated with bronchodilator OLD patients. Not only COPD, but also Asthma, and so on are including in the OLD. And second-hand smoke exposure was difficult to evaluate from the history.

Regarding the primary finding by Akamine et al., we aimed to investigate the connection between OLD disease represented by COPD and lung cancer in never smoker.

The major risk factors of COPD can be internal or external.

The oncogenesis of lung cancer and the onset of obstructing lung disease have a mutual mechanism, and smoking is a major and relatively well-evaluated common risk factor (25).

Oxidative stress (26), chronic inflammation (27), genetic factors (28), the involvement of proteolytic enzymes, aging, and epigenetic factors such as telomere shortening, DNA methylation, and histone modification are believed to be related (26). It is believed that smoking causes oxidative stress, chronic inflammation, DNA damage, and mismatch repair. In lung cancer with COPD unrelated to tobacco, some of these mechanisms are suggested to be involved in oncogenesis.

The prognosis of COPD with lung cancer in never smokers will have some common factors in the case of smokers. To explain the correlation mechanism between COPD in smokers and lung cancer, a genome-wide association study revealed susceptibility genome types overlap, such as CHRNA3/5, which concerns nicotine dependence in COPD and lung cancer (29,30). In a meta-analysis study by Jemma et al. (31), CHRNA3/5 gene variants mediate airflow obstruction regardless of smoking history. COPD is a clinically and pathologically heterogeneous disease (32). There are multiple conditions of the disease and prognosis, which are divided into clinical phenotypes. The level of airflow limitation, symptoms, and frequency of exacerbations is a clinical measurement for treatment and prognostic factors. Factors such as age (33), smoking index, FEV1 (33), the emphysematous lesion (34), hypoxemia (35), pulmonary hypertension (36), and systemic complications (37) including lung cancer can also affect the prognosis. Analysis of the pathological condition and its differences in each patient along with the genotype and endotype is ongoing worldwide (38). COPD is not only an oncogenic risk factor, but it also affects the overall and disease-free survival in patients with lung cancer (24). In cases where the patient has undergone surgery, the presence of severe COPD classified as GOLD 2/3 is a prognostic risk factor and can affect disease-free survival in patients with early lung cancer (39). Even in stage IA of NSCLC, Yoshida et al. reported that in patients classified as GOLD 2/3-COPD, 46.0% had postoperative pulmonary complications that led to poor prognosis (40). Carr et al. reported that visual emphysema, airflow obstruction as measured by FEV1.0, is an independent predictive risk factor of lung cancer in the current smoker and never smoker patients (41). They suggest that acute respiratory exacerbations should also be considered when screening patients because of the increased risk of lung cancer and small cell lung cancer than NSCLC.

COPD is not only an oncogenic risk factor, but it also affects the overall and disease-free survival in patients with lung cancer (24). In cases where the patient has undergone surgery, the presence of severe COPD classified as GOLD 2/3 is a prognostic risk factor and can affect disease-free survival in patients with early lung cancer (39). Even in stage IA of NSCLC, Yoshida et al. reported that in patients classified as GOLD 2/3-COPD, 46.0% had postoperative pulmonary complications that led to poor prognosis (40). Carr et al. reported that visual emphysema, airflow obstruction as measured by FEV1.0, is an independent predictive risk factor of lung cancer in the current smoker and never smoker patients (41). They suggest that acute respiratory exacerbations should also be considered when screening patients because of the increased risk of lung cancer and small cell lung cancer than NSCLC. Prognostic factors of COPD with lung cancer in never smoker are controversial, the decline of FEV1 and the emphysematous lesion will be a candidate (Figure 1). 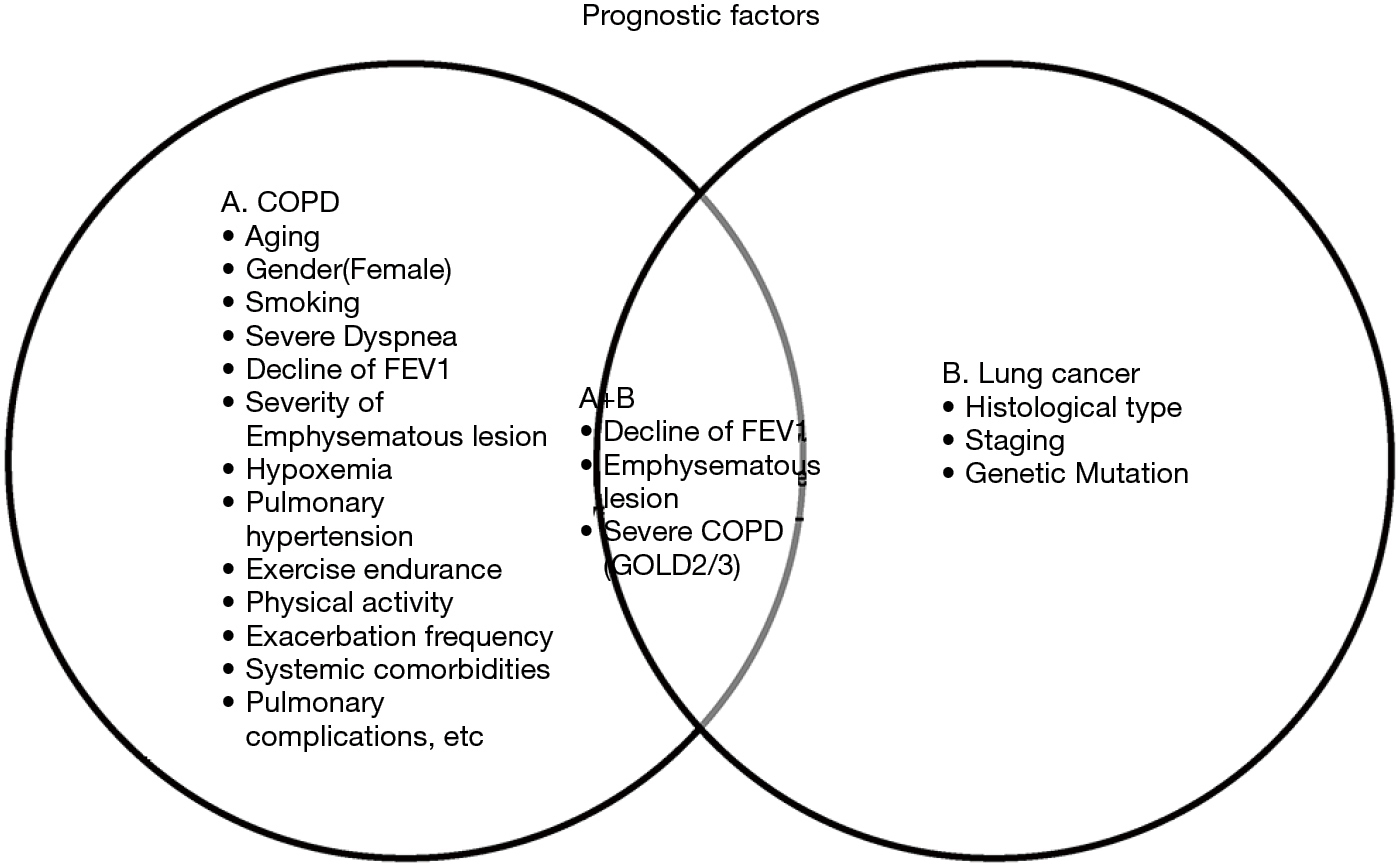 Akamine et al. focused on the possibility of the PIK3CA driver gene mutation as a potential pathogenic mechanism in the development of OLD in patients who had never smoked and had lung cancer (7). This was based on a previous study by Sawa et al., which insists that the PIK3CA mutation is a characteristic genetic feature of NSCLC with COPD, regardless of age, amount of smoking, pathological stage, and histology (42). No similar literature focused on the PI3KCA mutation in COPD-based lung cancer.

Phosphoinositide 3-kinase (PI3K) is a lipid kinase that regulates cell growth or apoptosis. Nicotine enhances cell migration through the PI3K pathway and yields to lung cancer cell invasion and metastasis (43). PI3K is classified into 4 classes: IA, IB, II, and III. The PI3CA gene is coded with a PI3K with a p110α unit, which is situated in class IA. PIK3CA mutant expression is well known in solid cancers and it activates lipid kinase and PI3K/AKT signaling (44). In NSCLC, the prevalence is approximate 2–4% and is higher in squamous cell carcinoma (45). In adenocarcinoma and squamous cell carcinoma, PIK3CA sometimes has mutations that coexist with other mutations of oncogenes such as EGFR, KRAS, BRAF, and ALK (45-47).

PIK3CA mutation also detects other colon cancers: breast, liver, and urinary bladder (48). It is not only present in malignant disease but also the overgrowth of body parts in the embryonic development, defined as PIK3CA-related overgrowth spectrum (PROS). PIK3CA mutation and PROS clusters concentrate on correlated hotspots, E542, E545, and H1047 (48).

PI3KCA mutation may be a genetic factor of NSCLC in never smokers; however, this is difficult to evaluate because it functions similarly to the nicotine contained in tobacco as a point of PI3K/AKT pathway activation, causing cancer progression.

A FEV1.0/forced vital capacity (FVC) ratio <bvvc0.7 is the common standard of OLD, which includes asthma, bronchiolitis, bronchiectasis, and the combination of chronic bronchitis and emphysema-related diseases.

In asthma and ACOS, the correlation between the carcinogenesis of lung cancer is unclear. Harada et al. insist that asthma and ACOS patients frequently end up dying because of malignant disease (50).

In 2005, Cottin et al. advocated that CPFE should be defined as emphysema in the upper lung field and fibrosis in the lower lung field as observed in chest computed tomography. A total of 50% of patients with CPFE have lung cancer (51), which is more frequent than COPD or fibrosis alone (52). The typical histological type of lung cancer with COPD (53) or CPFE is squamous cell carcinoma. However, the prognosis is worse for patients with CPFE, especially in patients who have undergone surgery (52). The difference between high carcinogenicity and high mortality rate means indicates that image evaluation will be considered in the study of the connection between OLD and lung cancer.

In the study of Akamine et al., OLD was defined as FEV1/FVC <70% and possibly included asthma or other obstructive diseases. Furthermore, normal respiratory function with emphysematous changes in the images is excluded, although nonemphysematous COPD is included. In the evaluation of nonsmoker lung cancer patients, a detailed medical history, respiratory function evaluation, and image evaluation are essential.

COPD is known as an independent risk factor for lung cancer in smokers. Akamine et al. reported OLD is as well in the never smoked lung cancer patients. OLD broadly defines the obstructive disease, it is controversial whether each disease or condition including in OLD needs to be examined or not. The multidimensional aspects of the COPD may need evaluation because of the clinical phenotypes and overlapping peripheral diseases such as CPFE that affect prognosis.

In never smokers, risk factors for oncogenesis are difficult to evaluate because they are more diverse than those in smokers. PI3KCA mutation may be one of the genetic characteristics, considering PI3K/AKT pathway activation because of solid cancer progression in other organs or PROS. Further observation and investigational studies are required.

Conflicts of Interest: All authors have completed the ICMJE uniform disclosure form (available at http://dx.doi.org/10.21037/jtd.2020.04.29). The authors have no conflicts of interest to declare.