Generally, pulmonary vessels have been dissected using a linear stapler. We, however, have been performing central vascular ligation before vascular dissection since starting video-assisted thoracoscopic surgery in 1992 (Figure 1). Our rationale for this step was to ensure the safety of the procedure by including measures against dysfunction of surgical stapling. This central vascular ligation may reduce intravascular exposure of the staple and contribute to a short PV stump. However, the effect of this central vascular ligation in terms of preventing PV stump thrombus and PCI is uncertain. We therefore retrospectively investigated cases of left upper lobectomy we had performed.

This study retrospectively reviewed the records of patients who underwent left upper lobectomy at a single center, Hokkaido Cancer Center in Sapporo, Japan, between November 1, 2008 and July 31, 2018. The ethics approval for this study was granted by the ethics committee of Hokkaido Cancer Center (approval number: 30-101); the requirement to obtain informed consent directly was waived and Informed consent was obtained in the form of opt-out on the website. We investigated all patients who experienced cerebral infarction and in whom PV stump thrombus was detected on contrast-enhanced computed tomography (CT) during follow-up. Cerebral infarction was diagnosed and treated by a neurologist.

The procedure was performed in the lateral decubitus position under general anesthesia. The trachea was canalized with a double-lumen tube for selective ventilation of the lung. A 4-cm operator’s port was made in front of the anterior line of the latissimus dorsi muscle on the posterolateral incision line (in the fourth or fifth intercostal space), and a 5-mm port for the thoracoscope was inserted at the mid-axillary line (in the fifth or sixth intercostal space, at a point that looks down the major fissure, sometimes more caudally). A 2-cm assistant working port was made at a posterior location on the same line (in the sixth or seventh intercostal space). Thoracoscopic surgery was converted to open thoracotomy as necessary. Conversions were performed if lymph nodes were difficult to peel from vessels due to calcification or other factors. If adhesions and incomplete lobulation were not identified intraoperatively, the interlobar branches of the pulmonary artery were divided after central ligation. Subsequently, the pericardium was not opened and central ligation of the PV was performed and divided in all cases. The bronchus was divided with a linear stapler. Finally, lymphadenectomy was performed as necessary.

Pre- and peri-operative data were collected retrospectively from the hospital electronic medical record. Follow-up contrast-enhanced CT was performed within 6 months postoperatively, although non-contrast-enhanced CT was performed for patients with contraindications such as renal dysfunction, allergy, hyperthyroidism or lack of consent for administration of contrast agent. We divided patients into two subgroups according to the presence of PCI, then preoperative clinical variables and perioperative variables were compared between the two subgroups.

The background characteristics and long-term outcomes of patients were examined. Continuous variables are summarized as median (range). All statistical analyses were performed using the JMP® 13 (SAS Institute Inc., Cary, NC, USA). Pearson’s chi-square test and Student’s t-test were used for statistical analyses. For exploratory analyses, logistic regression models were performed to determine the association of clinical characteristics with PCI. Values of P<0.05 were considered significant.

All 208 cases of left upper lobectomy included in this study underwent central vascular ligation of the PV (Table 1). Conversion to thoracotomy was seen in 28 of the 208 cases (conversion rate, 13.5%). Definitive diagnoses were: lung cancer, 200 patients; metastasis, 8 patients; and inflammatory mass, 1 patient. Contrast-enhanced CT was performed for 132 patients, with PV thrombus detected in 14 of these patients (10.6%). PCI occurred in 8 of the 208 patients (3.8%). In comparison with no-PCI cases, PCI cases showed significantly higher frequencies of comorbid cardiovascular disease (P=0.02), double cancer within 5 years (P=0.04), intraoperative hyperthermic chemotherapy (P=0.02), postoperative intrapleural inflammation (P=0.02) and postoperative PV stump thrombus (P=0.04). PCI within 30 days postoperatively was seen in only 2 of the 208 cases (1.0%). Of these two cases with early-onset PCI, one case showed postoperative nausea and vomiting and postoperative arrhythmia. The other case displayed recurrent nerve paralysis and aspiration pneumonia (Table 2). Two cases in which PCI developed after PV stump thrombus was detected had received intraoperative hyperthermic chemotherapy. In 6 of the 12 cases in which PV stump thrombus was detected, the thrombus disappeared spontaneously (Table 3). None of these 12 cases showed PCI or infarction of any other organ. In those cases, in which PV stump thrombus was detected after more than 1 year, cancer recurrence occurred and the cause of death was cancer (Figure 2). Patients with two factors of comorbid cardiovascular disease (odds ratio, 18.4; 95% confidence interval, 2.7–203.1) and intraoperative hyperthermic chemotherapy (odds ratio, 30.4; 95% confidence interval, 2.1–448.6) were considered to potentially be at higher risk of PV stump thrombus than those with none of these factors, respectively (Figure 3). 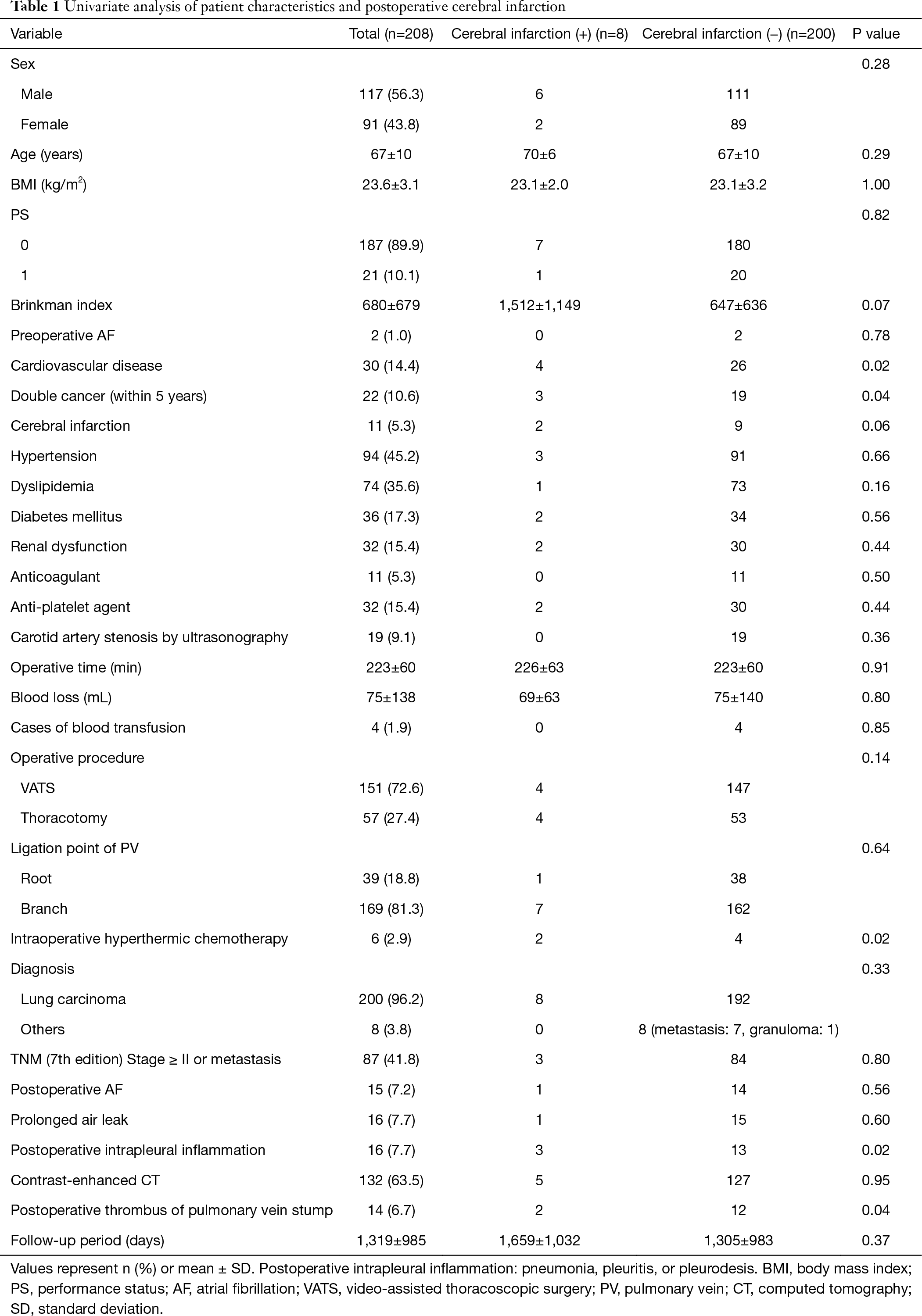 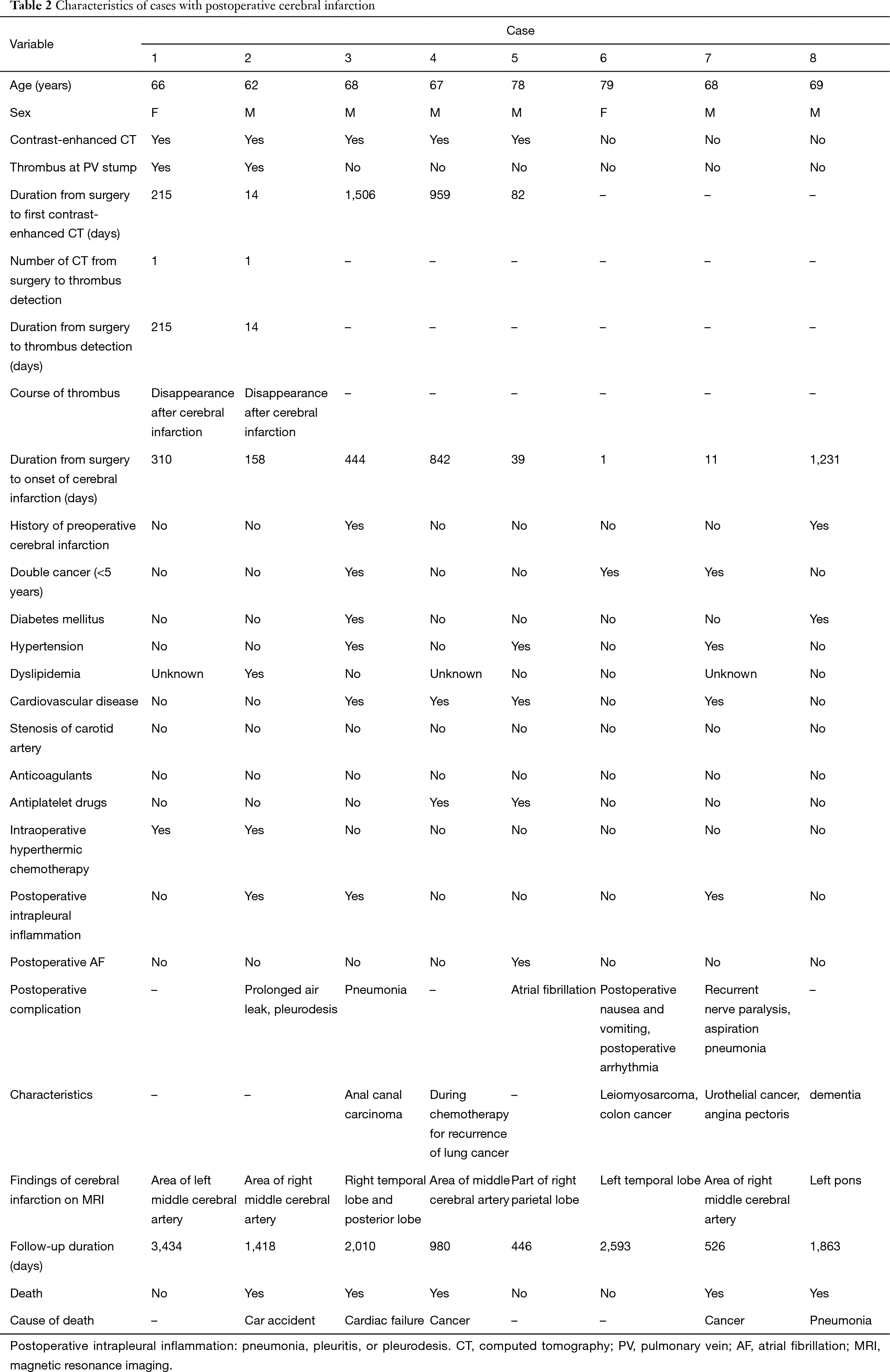 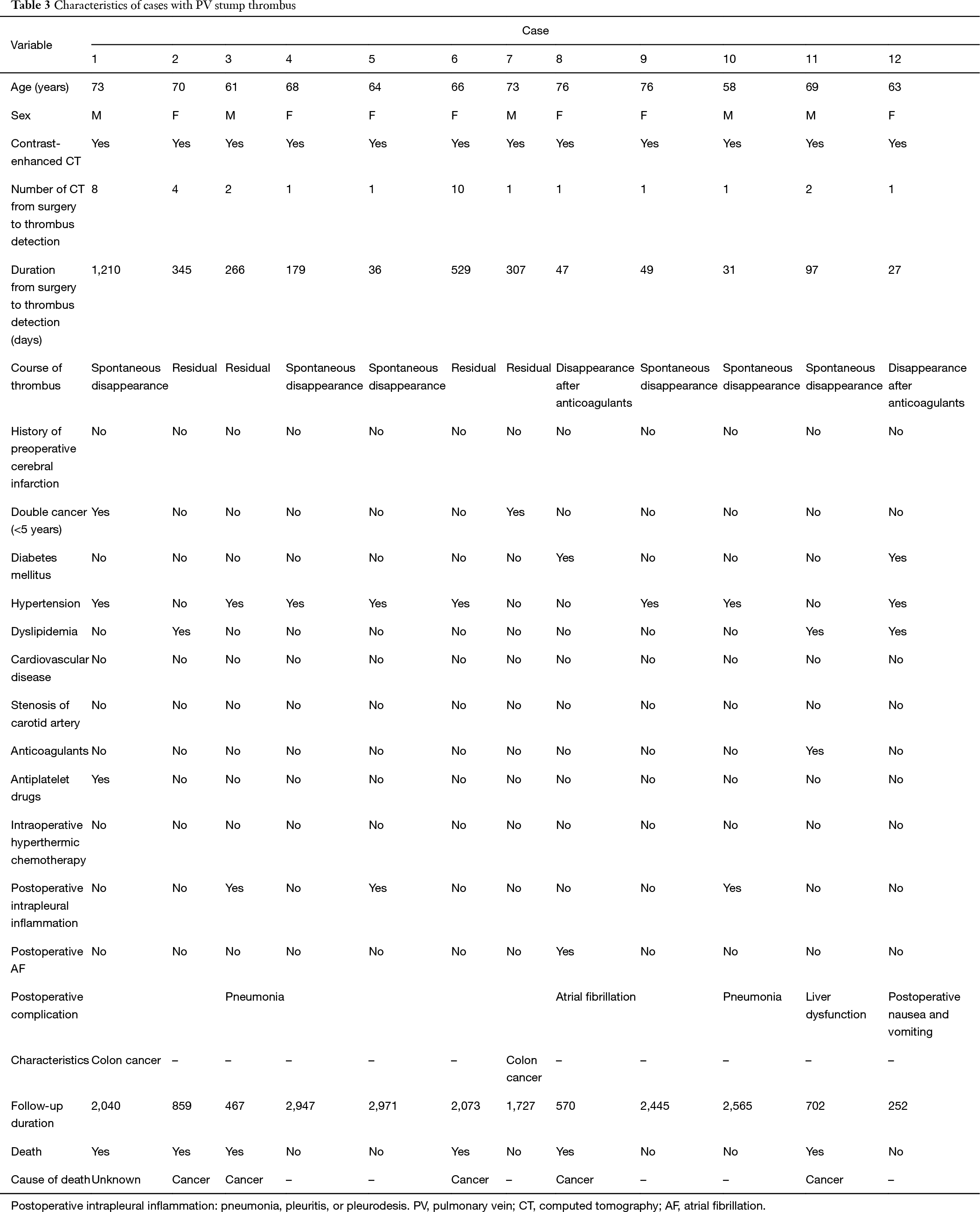 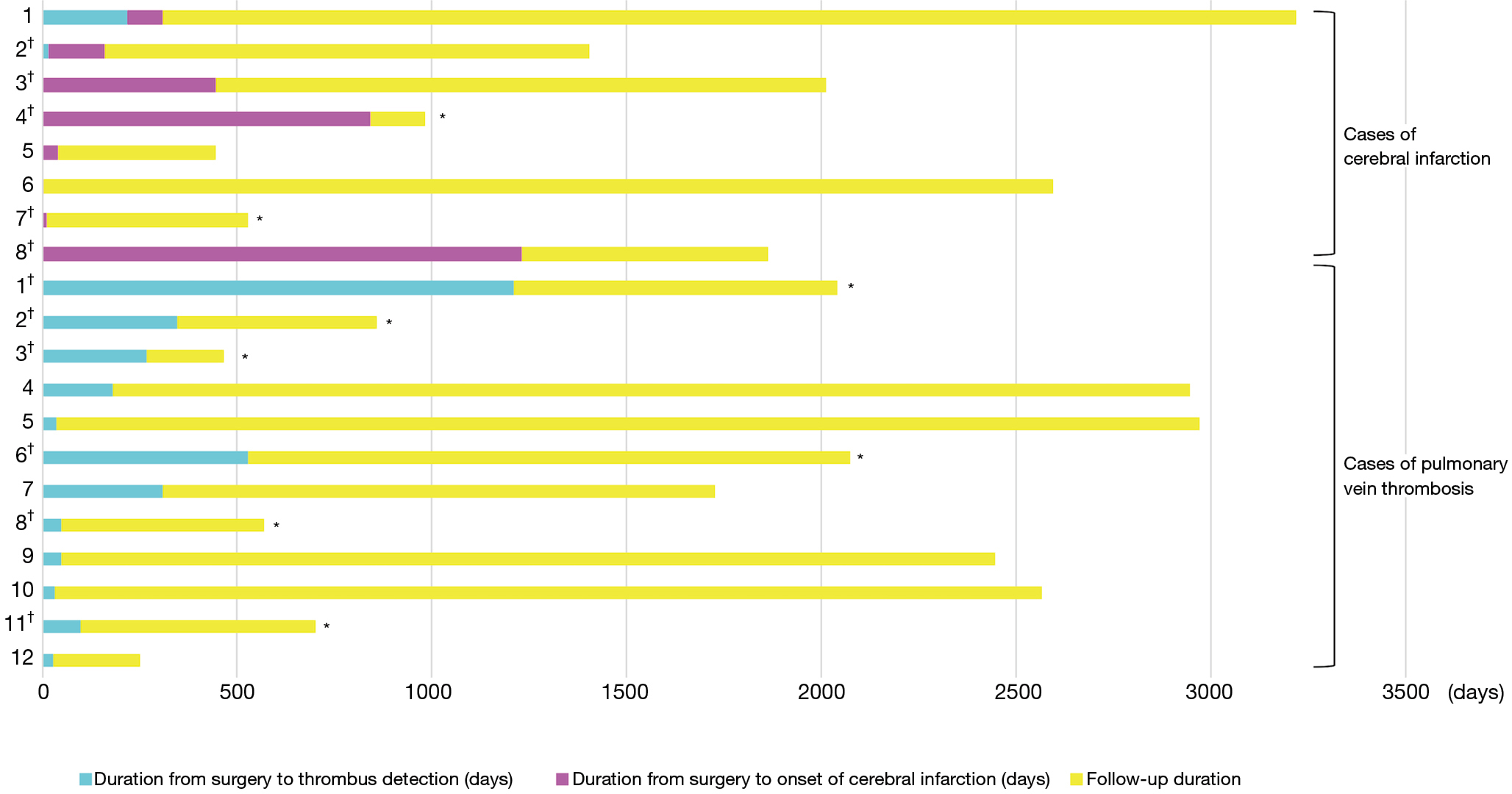 Figure 2 Period from surgery to onset of postoperative cerebral infarction or detection of pulmonary vein stump thrombus on contrast-enhanced computed tomography. The eight cases at the top of the graph developed postoperative cerebral infarction. Pulmonary vein stump thrombus was detected in the 12 cases at the bottom of the graph. †, cases of death by the end of follow-up; *, cases of cancer-specific death.

The rate of perioperative acute ischemic stroke has been reported as 0.6% for lobectomy/segmental lung resection (3). After left upper lobectomy, development of cerebral infarction reportedly occurs within 30 days postoperatively in 4.3% (4). In our study, the rate of cerebral infarction within 30 days postoperatively was 1.0%, lower than described in previous reports.

On the other hand, the rate of cases in which thrombus was identified at the PV stump on contrast-enhanced CT postoperatively was similar to previously reported values (2,3).

Thrombus formation is associated with Virchow’s three signs: circulatory stasis; vascular wall injury; and a hypercoagulable state. Although we have performed central ligation of the pulmonary artery and PV before vascular dissection with the intention of providing a bulwark against stapler dysfunction, this central ligation could also be interpreted as providing benefit though separating the line of staples as foreign bodies from the blood stream and thus preventing vascular wall injury. Our frequency of detecting thrombus was comparable to those reported previously. Nevertheless, the factors contributing to our low rate of PCI remain unclear. Half of our cases of PV stump thrombus disappeared spontaneously. Presumably, even once thrombus has formed because of turbulence and a postoperative hypercoagulable state, thrombus can dissolve over time. Namely, pulmonary stump thrombus arising from central ligation is presumably smaller or resolves more easily with the returning postoperative fibrinolysis compared to that from intravenous exposed stapling only. This may explain why the rate of cerebral infarction within 30 days postoperatively was lower in our study than that described in previous reports. Formation of thrombus at the PV stump even at a long period after surgery may be due to hypercoagulation from various causes. In both our cases in which PV thrombus was detected before PCI, high-risk factors had been present. Both patients had undergone pleurodesis or intrathoracic hyperthermic chemotherapy and intrapleural inflammation may have continued for a long time.

Neither of our two cases of early PCI showed any evidence of PV stump thrombus. However, both patients were at high risk of hypercoagulation. One had triple cancer, including lung cancer, while the other had experienced repeated aspiration due to recurrent laryngeal nerve paralysis. For such cases, it seems that postoperative anticoagulant should be considered. Including a case with atrial fibrillation, the other cases of late onset PCI also had risk factors for cerebral infarction, such as cardiac failure, relapse of lung cancer and pneumonia associated with dementia. Although our logistic regression models were exploratory, history of cardiovascular disease and hyperthermic chemotherapy could be risk factors. Therefore, it is assumed that PCI is not necessarily associated with PV stump thrombus.

The present study has some limitations that need to be considered when interpreting the results. This investigation used a single-institution retrospective design, and a multicenter study is required to further evaluate the predictive and prognostic significance of preventing PCI by central ligation of the PV. Moreover, risk factors need to be evaluated.

In conclusion, central ligation of PV may prevent postoperative early cerebral infarction. The two factors of comorbid cardiovascular disease and intraoperative hyperthermic chemotherapy may carry a higher risk of PV stump thrombus than the absence of these factors. Further study of the effectiveness of this method in preventing thrombus of the PV stump should be conducted.

The authors would like to acknowledge all the staff involved in the care of the patients in the Department of Thoracic Surgery at National Hospital Organization, Hokkaido Cancer Center.

Conflicts of Interest: All authors have completed the ICMJE uniform disclosure form (available at http://dx.doi.org/10.21037/jtd.2020.04.02). The authors have no conflicts of interest to declare.

Ethical Statement: The authors are accountable for all aspects of the work in ensuring that questions related to the accuracy or integrity of any part of the work are appropriately investigated and resolved. The ethics approval for this study was granted by the ethics committee of Hokkaido Cancer Center (approval number: 30-101). The requirement to obtain informed consent directly was waived and Informed consent was obtained in the form of opt-out on the website.