Delirium, known as the severe disorder of attention and cognition, always happens among elderly patients after the surgery (1). Significantly increasing the mortality and medical burden, delirium is a common complication for patients undergoing cardiac surgery, and the incidence of delirium is estimated as 26–52% (2). Due to its high prevalence and potential hazard, previous studies have been launched to find its cause (3), risk factors (4), prevention measures (5,6), and treatment (7). However, the problems with delirium remain high and tough for patients undergoing cardiac surgery.

The patients admitted to this hospital for cardiac surgery would be evaluated first by the responsible doctor. If eligible, the researchers (X Xue, P Wang, and J Wang) would further assess the patients, who would be enrolled once they agreed to participate. The study was approved by the ethical committee of Changzheng Hospital, Second Military Medical University (No: CZ2015046), and informed consent was taken from all the patients.

According to a previous report (11) and our own experience, the incidence of the delirium of the experimental group and the control group was estimated as 0.2 and 0.4. With the αvalue of 0.05 and the power (1-β) value of 0.9, the sample size of both groups was determined as 109 cases each group by PASS software (version 11.0, NCSS). We recruited a total of 220 eligible patients at first, according to the estimation.

After the enrollment, the baseline characteristics of each patient were collected. The patients would be randomly allocated into the experimental group and the control group, who were given the routine education and individualized education, respectively.

The randomization was conducted by one of the researchers, who used a series of consecutively numbered, opaque, sealed envelopes. The envelope was opened by the participant, and the expected interventions and evaluations were told to the participant after the allocation.

Patients in both groups were given the same anesthesia and surgical plan. Fentanyl (3 to 5 mg/kg), propofol (0.5 to 2 mg/kg), and rocuronium (0.6 mg/kg) were administered for induction of anesthesia, while 0.5% to 2.0% isoflurane was used for maintenance. The cardiac surgery of both groups was conducted by three cardiac surgeons randomly, with the routine procedure used. After the surgery, the intubated patients were sent back to CICU. Both groups were given propofol infusion (25 to 50 mg/kg/min) for sedation until tracheal extubation criteria were met. All patients followed the same extubation criteria of satisfying consciousness and respiratory function before weaning, which was assessed by the same CICU doctor.

Both groups of patients were given regular perioperative care. Routine education was conducted by the surgeon, the anesthetist, and the responsible nurse. The surgeon would provide a brief introduction to the surgery and specific concern. At the same time, the anesthetist would briefly introduce the anesthesia process and potential risk to the patients and their families. Informed consent to the surgery would be gained. The responsible nurse would be in charge of another education course, including the cough practice, the gesture introduction, the pain management, and the environment orientation.

Individualized education, according to the patients’ characteristics, was conducted for the experimental group by a group of trained educators. The group was comprised of experienced ICU nurses, who were given specific training on how to perform the preoperative individualized education. A set of education leaflets were made for a better understanding of the theme-“what’s going on after the surgery”. Different education ways were selected according to the age, gender, education level, and surgery type. The leaflet contents can be separated into three parts. The first part introduced the operation process with colorful illustrations, the second part demonstrated the sights, sounds, and nursing care to be anticipated postoperatively, and the third part gave an introduction to the equipment used in ICU. The education would be launched about three days before the surgery when the patient and family were available when the educator welcome them at first and then distributed the leaflets. Next, the educator would try to make the education through and eliminate the anxiety of the patients. Actual instruments in ICU would be used as a tool for learning, and also a tour to ICU would be made when applicable. The focus would be put on the familiarization of the postoperative process and the request for the cooperation of the patients. The leaflets would be sealed in an envelope, and the participants would be requested, not showing them in public to avoid interference. The characteristics of routine education and individualized education were summarized in Table 1.

The primary outcome was the incidence of delirium examined in the first week during the hospital stay. The delirium was identified by the Confusion Assessment Method for the Intensive Care Unit (CAM-ICU) (12). The assessment was exclusively conducted by the research groups, who systematically learned and reviewed the training manual, online course, and case studies provided by Ely study. Usually, the assessment was firstly conducted 12–18 hours after the surgery, when the patient had stabilized after postoperative bleeding, arrhythmias, hemodynamic instability, or low levels of consciousness related to anesthesia. The assessment was conducted every day until the CAM-ICU was positive. The CAM-ICU requires patients to complete non-verbal tasks including picture recognition, providing simple “yes/no” answers to logic questions and following simple commands to assess attention, verbal and visual recognition, and any disorganized thinking. It takes approximately 5 min to complete the assessment based on the following criteria: (I) acute onset and fluctuation of symptoms; (II) inability to concentrate or pay attention; (III) disorganized thinking; and (IV) an altered level of consciousness. The diagnosis of delirium was established when the patient had the first and second feature in addition to either the third or the fourth feature. Secondary outcomes include in-hospital death, mechanical ventilation time, time to discharge, time of ICU stay, and postoperative complications.

Baseline characteristics were compared using the Student t-test for continuous variables meeting the normality distribution, Mann-Whitney U test for non-normality distribution variables, and Chi-square test or Fisher exact test for categorical variables. For the primary endpoint, the incidence of postoperative delirium was described and analyzed by the Kaplan-Meier survival curve and Log-rank test. For secondary endpoints, the in-hospital death and postoperative complications were compared with the Chi-square test or Fisher exact test, while the mechanical ventilation time, time to discharge, and time of ICU stay were compared with Mann-Whitney U test. A P value less than 0.05 was considered statistically significant.

From April 2015 to March 2017, a total of 220 patients eligible for the trial were assessed, among whom 156 patients consented and were enrolled in this study. Finally, 133 patients completed this study, while 23 patients were excluded, including 15 patients who didn’t receive cardiac surgery, four patients transferred to other hospitals, and four patients dropped off from the trial. Figure 1 showed the flowchart of the present study. 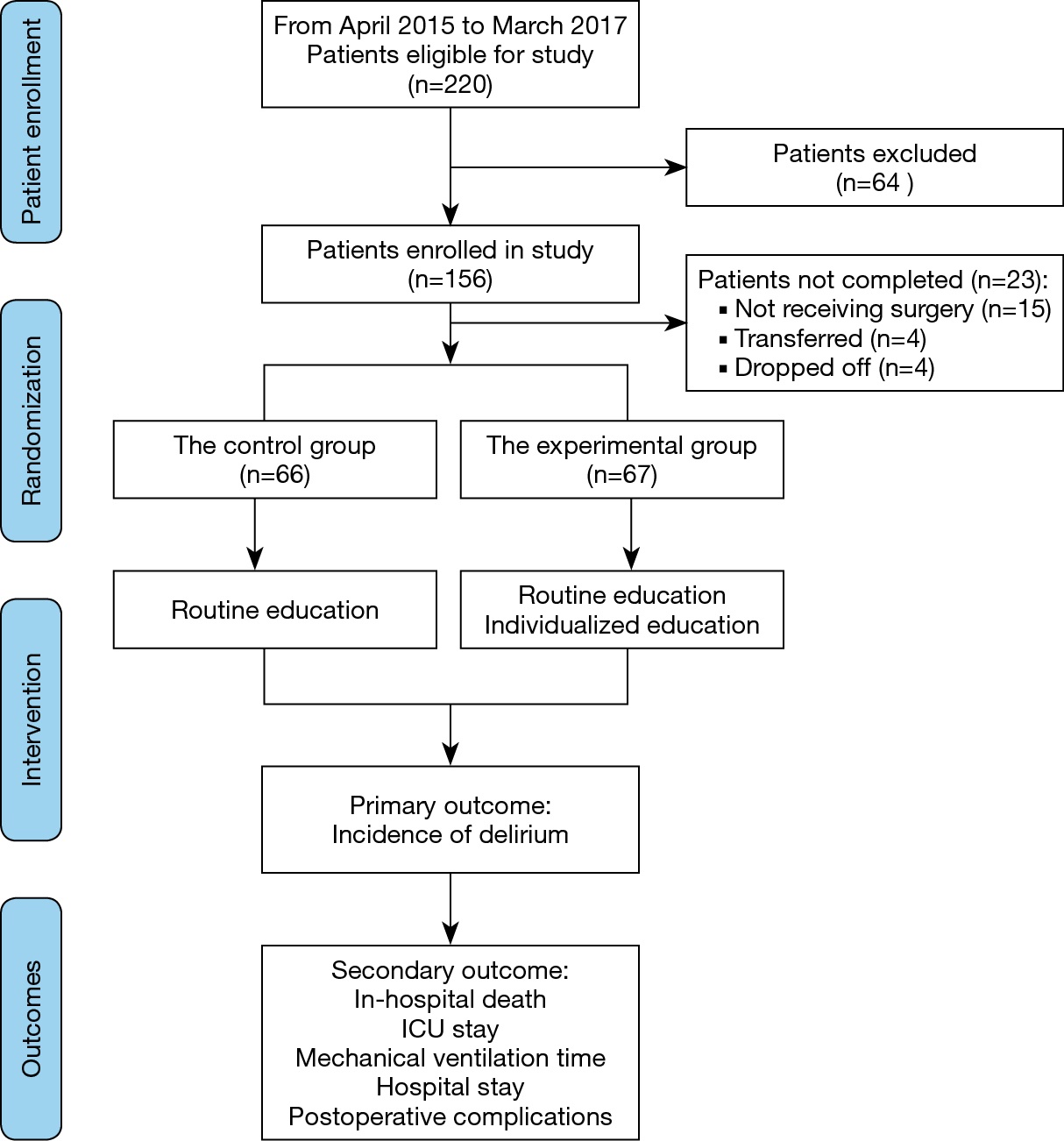 Figure 1 the flowchart of the study.

Showed in Table 2, there was no significant difference between the two groups, including demographical characteristics, cardiac function, surgical risk, comorbidities, surgery type, and operative data (All P>0.05). 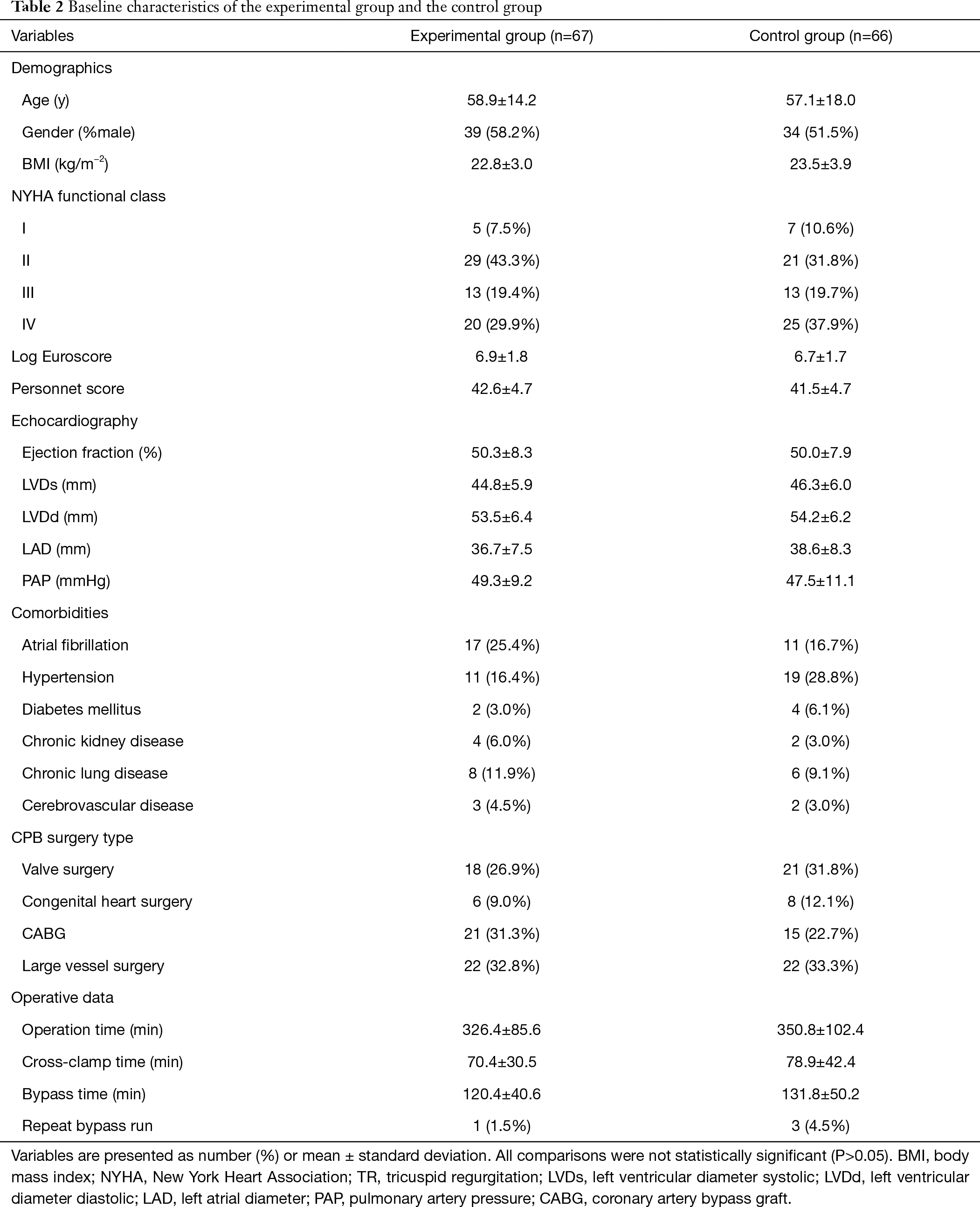 The survival curve compared the incidence of the delirium of two groups in Figure 2. For the experimental group, a total of 7 patients developed a delirium (10.4%), while there were 16 patients (24.2%) in the control group developing delirium. The log-rank test showed that the incidence of delirium for the experimental group was significantly lower than that of the control group (P=0.038). 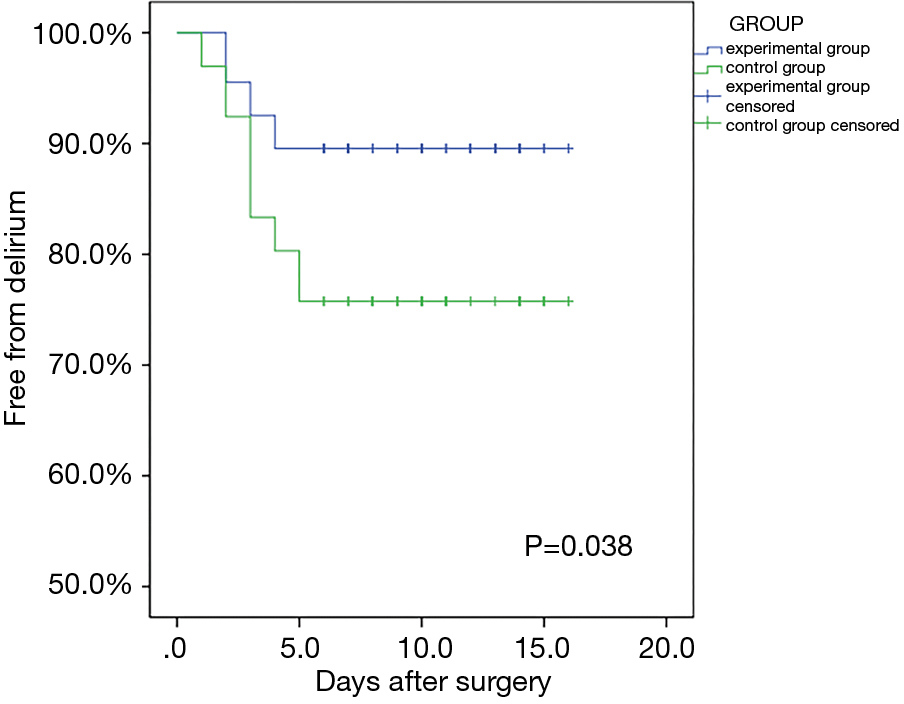 Figure 2 The survival curve of two groups for the incidence of postoperative delirium.

Table 3 showed the secondary outcomes. Both groups have one In-hospital death (1.5%) with no statistical difference (P=0.991). The mechanical ventilation time and the ICU stay of the experimental group were significantly shorter than those of the control group (P=0.002 and P=0.003, respectively). In contrast, the hospital stay was similar between the two groups (0.140). As for the postoperative complications, the two groups showed similar incidences (All P>0.05). 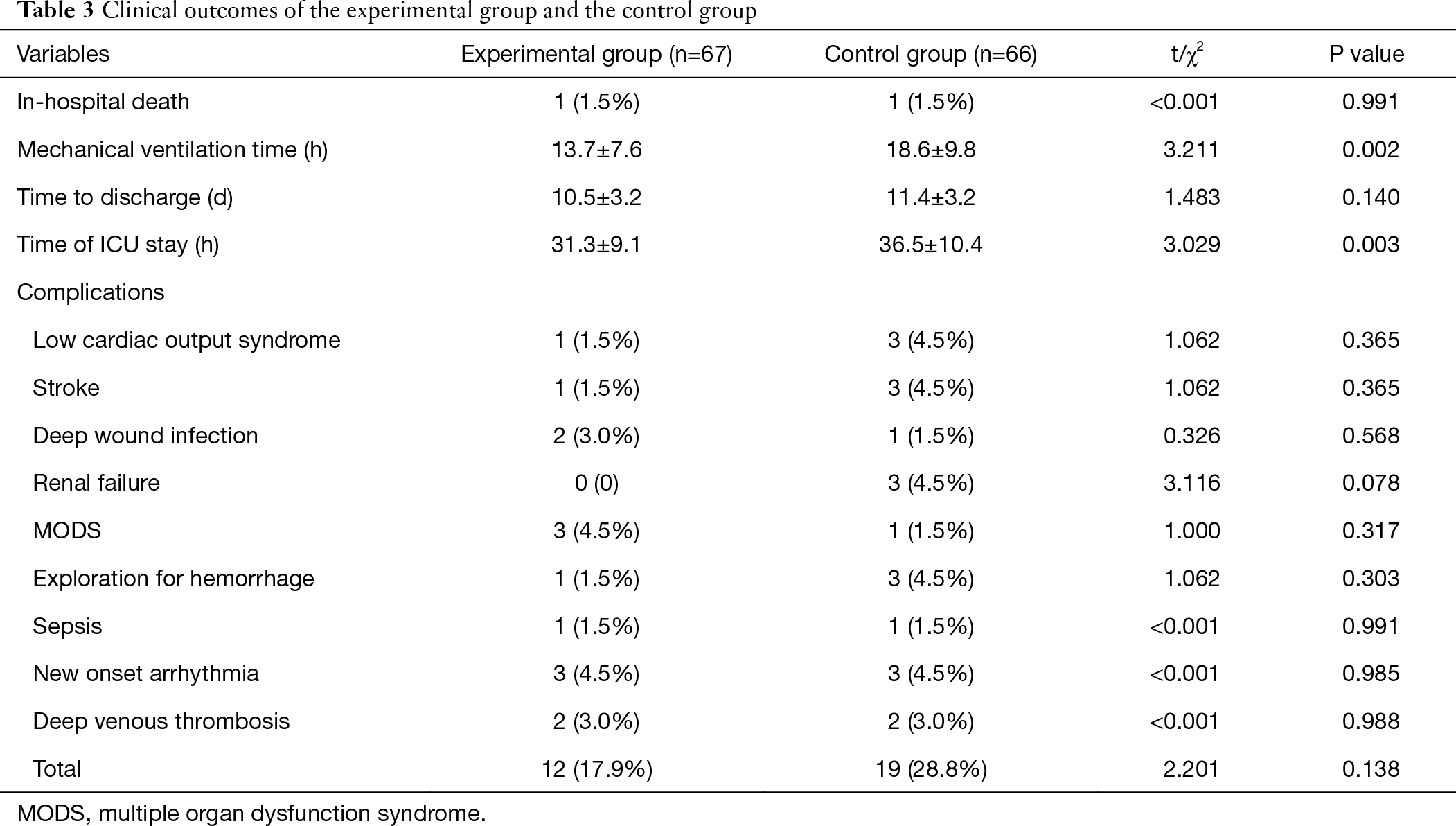 The underlying mechanism of delirium remained incompletely understood. At the same time, most studies have proven it to be a common and acute severe neuropsychiatric syndrome with core features of inattention and global cognitive dysfunction, due to diverse and multifactorial causes of a severe medical illness, medical complication or drug intoxication (13). Previous studies have demonstrated that advanced age, cognitive impairment, comorbidity, depression, smoking, alcohol, visual and hearing impairment, ASA-score, biochemical abnormalities, operative strategies, and blood loss were the most common risk factors for delirium (14). Based on existed studies, prevention measures, including pharmacological (15) and non-pharmacological (16) approaches, have been developed to reduce the incidence of delirium (6). Patients undergoing cardiac surgery are subjected to a high risk of postoperative delirium because of the cardiopulmonary bypass process, the intense pain, the intubated condition, and the great fear they have (17).

The total incidence of delirium in the present study is 17.3% (23/133), with the experimental group of 10.4% (7/67) and 24.2% (16/66). The incidence was slightly lower than previous reports, which was caused by the diagnosis methods adopted in this study (11). We chose a “conservative” approaches, which meant that only when both CAM-ICU and the physician give positive results, the patients could be confirmed as delirium. Studies have shown that CAM-ICU could identify more hypoactive delirium, which does not present with the behavior changes seen in the hyperactive form (20). However, this hypersensitive attribute might also bring about false-positive cases. Hence, we chose a conservative way to test whether the interventions could help reduce the incidence of delirium. Strike also combined CAM-ICU with the judgment from a psychiatrist as an assessment of delirium for patients undergoing TAVR operation (21). We believe using a subjective judgment as a complementary tool won’t reduce the accuracy of delirium diagnosis, based on the following reasons. First of all, the personal experience only excluded some suspected cases of the delirium of CAM-ICU confirmed, not to include cases of CAM-ICU unconfirmed, which could reduce the false positive rate to some extent. Second, the attending physician is a very experienced and well-qualified doctor who has passed the psychiatrist examination. Last, even when this method excludes some cases, the experimental group was still lower than the control group. Compared with CAM-ICU, CAM is a probably more detailed and more rigorous instrument, which could uncover more hypoactive delirium than the CAM-ICU (22). However, CAM is feasible only for verbal patients after extubation, while some patients in CICU experienced delirium before extubation. To keep the consistency in RCT, we used the CAM-ICU only in the assessment of consciousness and diagnosis of delirium.

Some limitations of this study must be noted. First of all, the nature of the interventions has made it impossible for blindness; however, which also made the bias exist. Second, although the request for forbidding sharing the education materials had been made, the contamination between the two groups could not be avoided. Third, individualized education was conducted by a group of educators, and different educators might have different education levels or styles, which might also affect the final results.

Conflicts of Interest: All authors have completed the ICMJE uniform disclosure form (available at http://dx.doi.org/10.21037/jtd.2020.04.26). The authors have no conflicts of interest to declare.

Ethical Statement: The authors are accountable for all aspects of the work in ensuring that questions related to the accuracy or integrity of any part of the work are appropriately investigated and resolved. The study was approved by the ethical committee of Changzheng Hospital, Second Military Medical University (No: CZ2015046), and informed consent was taken from all the patients.