None of these prior studies included proportion of ground-glass opacity as a factor in their analyses, and proportion of ground-glass has been associated with both race and survival (7,8). Among patients with lung cancer, Asians are more likely than Caucasians to be never smokers and to develop sub-solid tumors that harbor EGFR mutations (9). Sub-solid tumors, with varying proportion of ground-glass opacity, are being found more frequently, either incidentally on CT scans obtained for other reasons or on low-dose screening CT scans (10). Patients with these sub-solid lung adenocarcinomas have better overall survival than those with pure solid tumors (7,11,12). Many groups have studied how to monitor these sub-solid lesions (13,14), and many are advocating for sublobar resection of these tumors given their lower likelihood of being associated with lymph node metastases and their better prognosis (15).

A reliable study of differences in survival between Asian and Caucasian patients with lung adenocarcinoma must include the proportion of ground-glass opacity as a confounding variable, and this variable is unavailable in nearly all databases and cancer registries. We therefore set out to use our more granular institutional data, which includes information on proportion of ground-glass opacity, to determine whether Asians and Caucasians with sub-solid nodules indeed have different biology, and whether that biology results in differences in survival.

We identified our study cohort from patients who underwent surgical resection for lung cancer of any stage at Stanford University Medical Center from April 2002 to June 2015. A prospective database including all thoracic surgery patients was started in 2008. Patients before 2008 were identified retrospectively.

We excluded patients who were not Asian or Caucasian. Race was self-reported, and Asian race was defined to include patients having origins in the Far East, Southeast Asia, or the Indian subcontinent. We excluded patients who had undergone previous surgery for lung cancer, as well as patients with tumor histology other than adenocarcinoma and tumors that were not sub-solid. Sub-solid was defined as ≥10% ground-glass opacity on preoperative CT scan or ≥10% lepidic or in-situ component on surgical pathology. Percentage of ground-glass opacity was estimated by retrospective review by either a radiologist or thoracic surgeon. Percentage of adenocarcinoma subtypes has been routinely quantified by our pathologists since 2012, and tumors resected prior to 2012 were retrospectively re-reviewed for this purpose.

Clinical data were obtained through review of electronic medical records. Staging was reclassified using the American Joint Committee on Cancer eighth edition (16). Overall and recurrence-free survival were calculated from the date of surgery. Information on patients with recurrences were reviewed in detail, and new lung nodules considered to be separate primary tumors were not categorized as recurrences. The Stanford University institutional review board approved the study.

Patient baseline characteristics and outcomes were summarized and compared by race. Continuous variables were described using mean with standard deviation, or median with interquartile range (IQR) (25th and 75th percentiles). They were compared using the Student’s t test for mean differences and Wilcoxon Rank Sum test for median or rank differences. Categorical variables were compared using the chi-square test. Kaplan-Meier curves were created to visually depict the overall and recurrence-free survival by race and mutation status, and were compared by the log-rank test. Univariable and multivariable Cox proportional hazards models were performed in time-to-event survival analysis. Race and proportion of ground-glass opacity were included a priori in multivariable models. Age, sex, smoking status, stage, grade, mutation status, surgical type, and adjuvant therapy were included in the multivariable model if the P value of unadjusted effect was less than 0.3 in the univariable analysis and the P value of the adjusted effect kept significant or nearly significant (P value <0.15) in the multivariable model after adjustment of multiple covariates. For all statistical analyses, a two-sided α-level of 0.05 was considered statistically significant. Analyses were performed using SAS version 9.4 (SAS Institute Inc. NC, USA). 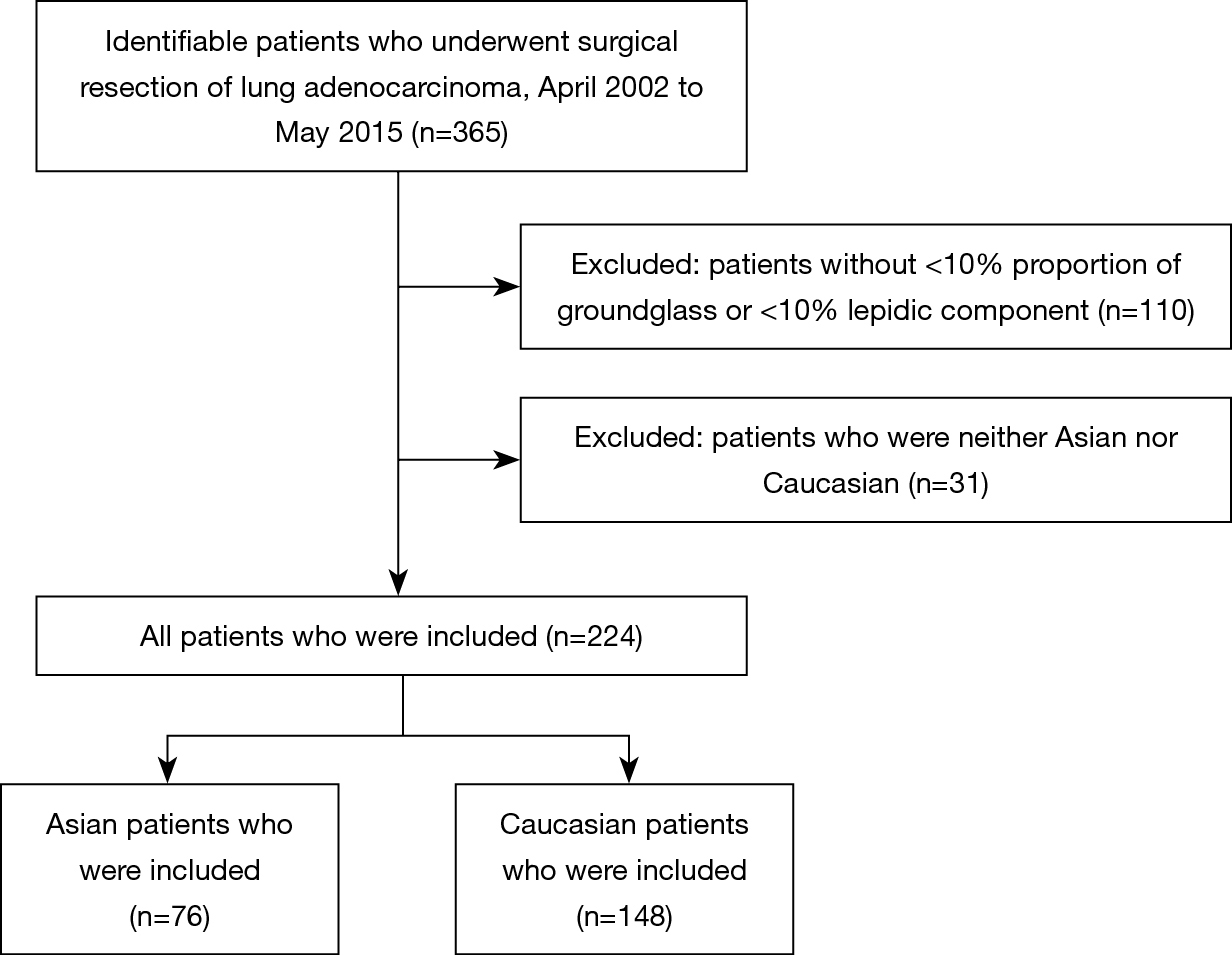 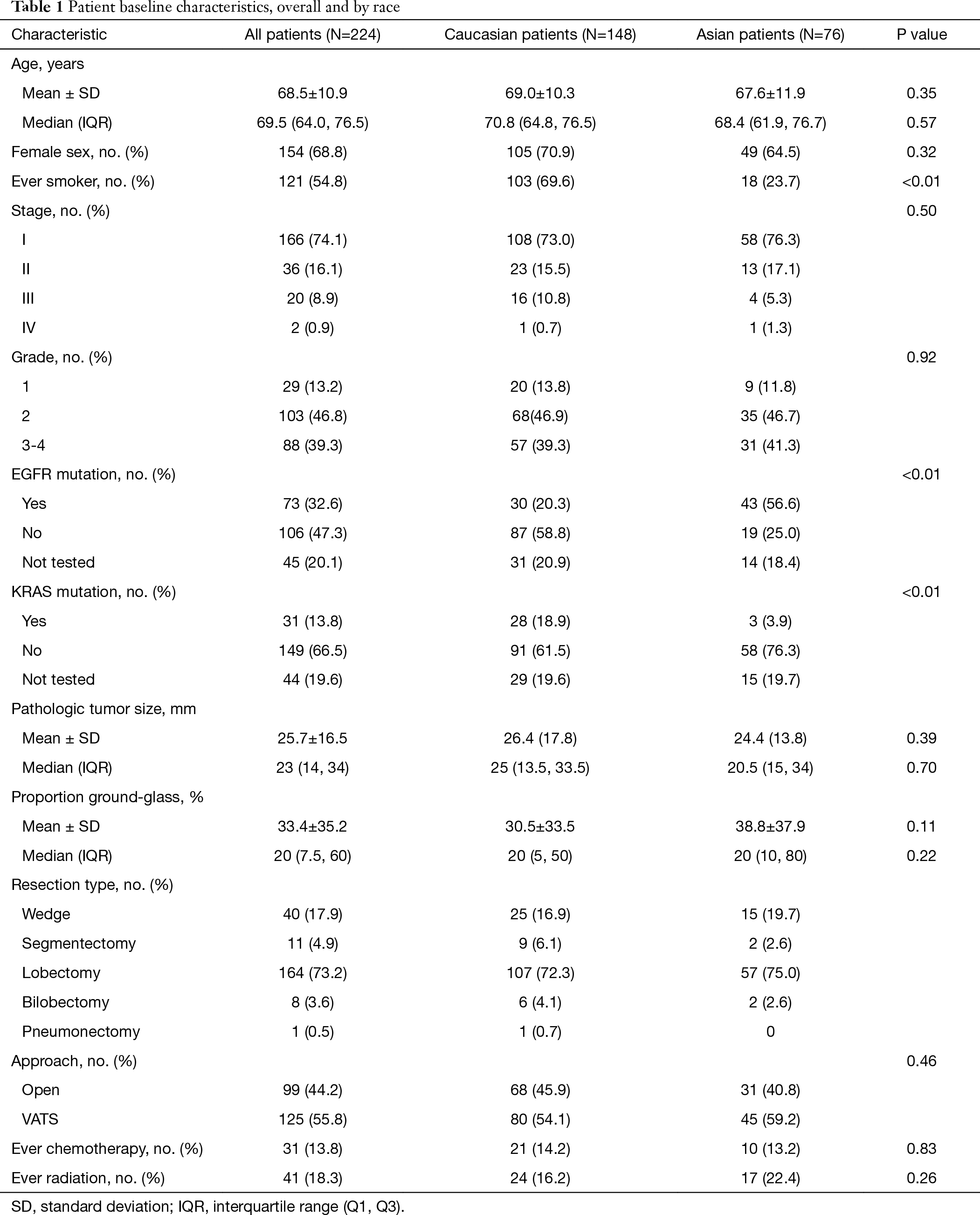 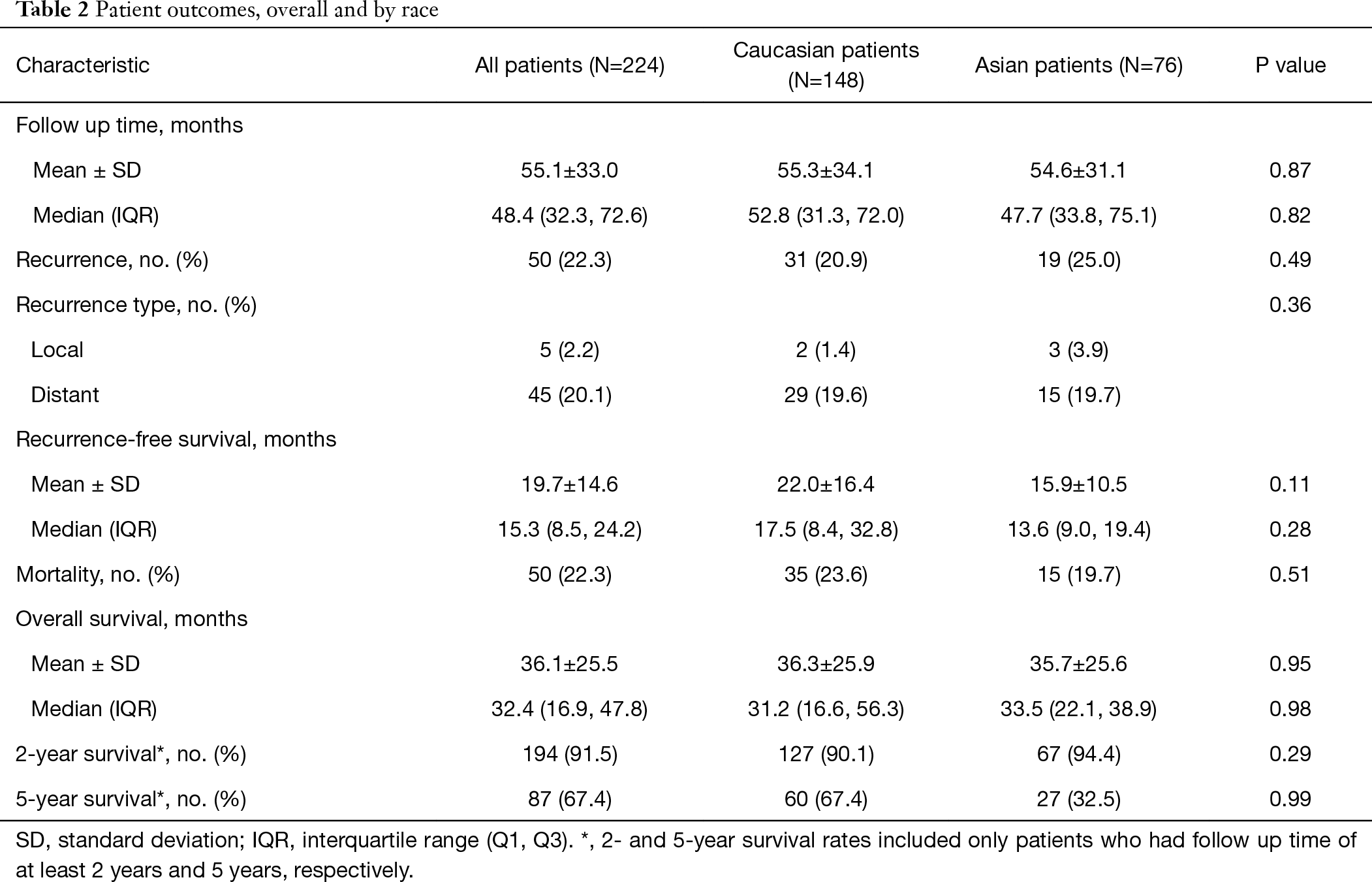 Figure 2 Kaplan-Meier curves for recurrence-free survival by (A) race and (B) EGFR mutation status. 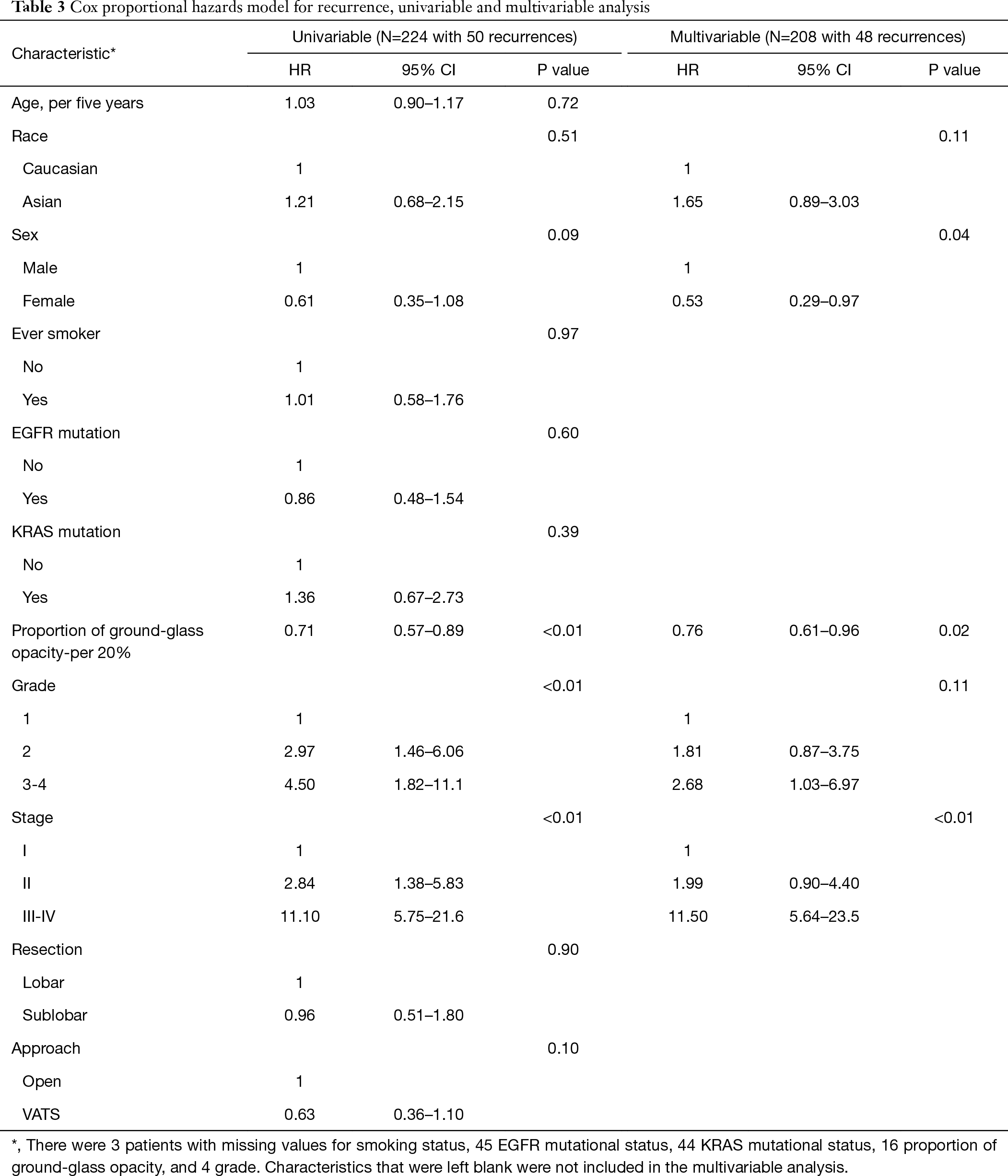 For overall survival, Kaplan-Meier curves again showed no significant difference by race (Figure 3A), but there was improved survival among patients with an EGFR mutation (P=0.02) (Figure 3B). Univariable analysis showed that smaller proportion of ground-glass opacity, higher grade, higher stage, sublobar resection, and open surgical approach were all associated with higher mortality (Table 4). However, only higher stage was significantly associated with worse overall survival on multivariate analysis. EGFR mutational status was not significant, although there remained a trend towards improved survival for patients with EGFR mutations (HR 0.48; 95% CI, 0.19–1.24; P=0.13).

Figure 3 Kaplan-Meier curves for overall survival by (A) race and (B) EGFR mutation status. 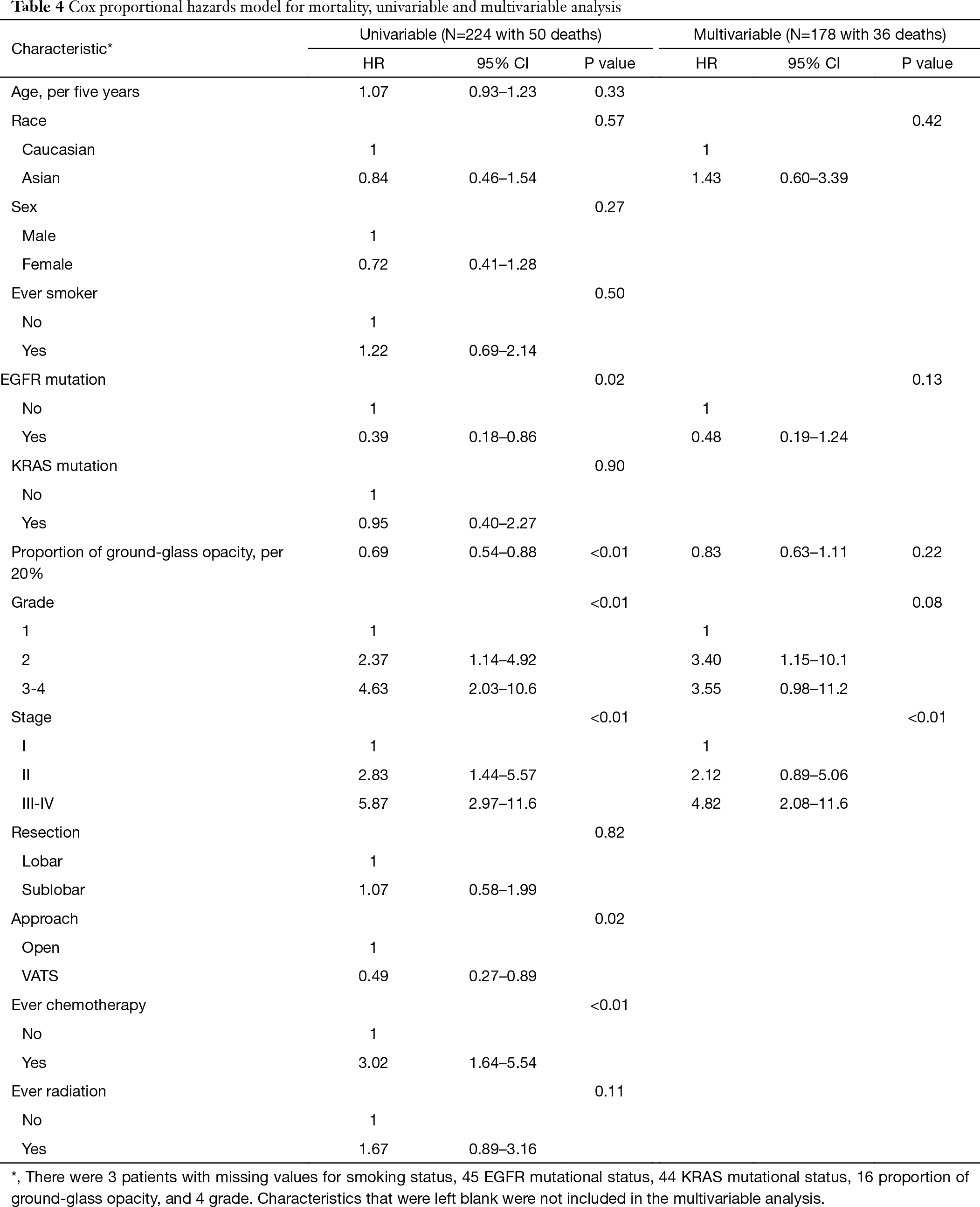 Several previous studies have shown that Asian patients are more likely to be never smokers (9,17) and to express EGFR mutations (18,19), while Caucasian patients are more likely to express KRAS mutations (20). Sub-solid tumors have been extensively studied in Asia (13,14), as well as at our institution, where our population includes a large proportion of Asian- American patients, as well as never and light smokers (7,21-23).

However, it has been unclear whether overall survival differs between Asian and Caucasian patients with NSCLC. Most cancer registry studies have shown that Asians have better overall survival, when all histologic types are included. Ou et al. studied 19,702 patients with stage I NSCLC in the California Cancer Registry from 1989 to 2003 (4). Zell et al. studied 27,435 cases of stage IIIB and IV NSCLC in the United States Surveillance, Epidemiology, and End Results (SEER) database from 1999 to 2003 (5). In both of these studies, multivariable analysis showed that Asian patients had improved overall survival compared to Caucasian patients.

Only one registry study included smoking status in their analysis. Ou et al. studied 20,140 patients with NSCLC and known smoking status from 1991 to 2005 in the Cancer Surveillance Program of Orange County and the San Diego/Imperial Organization for Cancer Control (CSPOC/SANDIOCC), which collected data from those three southern California counties before the California Cancer Registry took over collection in 2008 (25). Multivariable analysis showed that Asian ethnicity was independently associated with improved overall survival compared to all other ethnicities. Younger age, female sex, and bronchioloalveolar carcinoma were all independently associated with improved overall survival. Smoking status was not significant.

Proportion of ground-glass opacity is an important predictor of survival that is not included in any of these databases. At our institution, we previously studied patients with cN0 lung adenocarcinoma who underwent surgical resection and found that patients with even a minor (1–25%) ground-glass component had improved overall survival compared to those with pure solid lesions (7). Hattori et al. showed that patients with clinical stage IA NSCLC with sub-solid tumors [consolidation tumor ratio (CTR), 0.50–0.99] had improved five-year overall survival compared to those with pure-solid tumors (CTR, 1.0) (12). Finally, the current lung adenocarcinoma classification system includes a predominate lepidic component as an important prognostic feature (26).

In this study, which focused more narrowly on sub-solid tumors and included proportion of ground-glass opacity in the analysis, there was no difference in survival between Asian and Caucasian American patients. An advantage of our Northern California population, which includes many people of Asian origin and also many non-smokers, is that we were able to include a sizeable number of both Asian and Caucasian patients with sub-solid tumors in our cohort. With single-institution, granular data, we were able to include mutation status and proportion of ground-glass opacity in our analysis—all known to affect survival but unavailable in most database studies.

However, our study does also have several limitations. It is retrospective and includes only a single institution. All Asian patients were grouped together, even though this group is ethnically diverse and cancer incidence and mortality may vary among subgroups (27,28). The majority of patients underwent anatomic lung resection, but we do not know the selection criteria for sublobar or wedge resection. In addition, mutational testing became routine only a few years ago, so not all tumors were tested (29).

Several previous studies that suggested that Asian Americans with NSCLC have improved overall survival compared to Caucasian Americans did not include smoking status, proportion of ground-glass opacity, or mutation status in their analysis. Our study showed that among patients with sub-solid lung adenocarcinoma, Asian patients were more likely to be never smokers and have the EGFR mutation, and Caucasian patients were more likely to have the KRAS mutation. There was a trend towards Asian patients having a higher proportion of ground-glass opacity. However, on multivariable analysis, there was no significant difference in overall or recurrence-free survival.

Ethical Statement: The authors are accountable for all aspects of the work in ensuring that questions related to the accuracy or integrity of any part of the work are appropriately investigated and resolved. Our institutional review board approved this retrospective study under protocol 21285 and waived the requirement for informed consent.