The effect of endoscopic vein harvesting in coronary artery bypass surgery
Video 1 An example of EVH, where the SV was bifurcated during its track in the thigh, in our institution. An incision was made on the skin just above the SV, posteriorly and inferiorly to the medial tibial condyle, and exposing the SV (00:00–00:02). Isolating the subcutaneous tissue near the incision, and insertion of a balloon port at the incision to create a tunnel inside the leg. Dissecting the fascial roof over the vein to develop a plane superficial to the great saphenous vein (00:02–01:20). Dissecting the lateral and deep margins of SV, the surgeon isolated both the bifurcation of SV (01:20–02:12). Dividing the branches and panniculus adiposus still connected to the SV by coagulator (02:12–03:43). Making an incision below the groin and dividing the SV near the saphenofemoral junction (03:43–03:57). Taking out the Y shape SV (03:57–04:11). SV, saphenous vein; EVH, endoscopic vein harvesting.

Coronary artery bypass grafting (CABG) is considered as a better revascularization modality in most of the cases with multi-vessel coronary artery disease (1). Arterial grafts have been advocated because of their long-term patency compared with saphenous vein grafts (SVG) (2). However, arterial grafts are limited due to the occurrence of spasms, and poor results when the target vessels were less stenotic. SV remains an indispensable conduit in CABG. Endoscopic harvesting of SV is one of the novel innovative strategies in CABG during the last twenty years. But the impact of endoscopic vein harvesting (EVH) on CABG outcomes remains ambiguous (3). At the same time, it is challenging to treat the occluded SVG. Therefore, preventing SVG occlusion is of great importance (4). Hence, we aimed to compare clinical outcomes 1-year graft patency rates, the endothelial integrity, and postoperative wound complications between SV grafts accessed by EVH and open vein harvesting (OVH).

A total of one hundred coronary artery disease subjects who signed the informed consent form and permitted their SV to be preserved for studying from July 2015 to December 2015 were reviewed. SVG were harvested with EVH technique (EVH group) in 50 of them, while others accepted OVH technique (OVH group). All the patients underwent elective CABG with median sternotomy approach. And all of them had no less than 1 bypass graft aimed to diagonal branch or left circumflex artery planned to use SVG for conduit. This study was approved by the institutional review board and was performed in accordance with the Declaration of Helsinki and approved guidelines (Approval No.: 2015-652).

We adopted the device of Maquet (Maquet Cardiovascular LLC, San Jose, CA, USA). A 2 cm skin incision was made directly across the SV, posteriorly and inferiorly to the medial tibial condyle. The balloon port was inserted to seal the incision to create a tunnel in the thigh. Then the fascia roofed over the vein was dissected to develop a space superior to the great SV. After that, the lateral and the inferior fascia were dissected. In order to protect the adventitia, the SV should be handled with care and avoid the dissector pointing towards the wall of the SV. The branches should be divided with a distance of more than 3 mm from the trunk. The SV was then detached near the saphenofemoral junction through a 3 mm incision. Following the removal, the distal end of the vein was cannulated. Then saline containing papaverine and heparin was injected into the vein to check the leaks. The branches were clipped with titanium clips. Repairing of the leakages was performed using 7-0 Prolene sutures. After evacuating the blood in the tunnel of the leg, the incision was closed with a continuous suture. The operated leg was then wrapped with an elastic bandage for 24 hours (Video 1).

OVH was conducted with a continuous incision along the route of the vein. An incision was made at the front of the malleolus. Care must be taken to avoid any injury of the saphenous nerve, vein and its branches. The wound was closed with continuous sutures. After vein harvesting, bandage was applied to the leg for 2 days.

A 5-mm segment was cut-off from the end of the SV before distension and then fixed by 2% paraformaldehyde. After distention with heparinized papaverine saline, another 5-mm segment was taken from the end of the SV for fixing. Those specimens were post-fixed in 1% osmium tetroxide in phosphate buffer. Then the specimens were spatter-coated with a gold layer and observed with a JEOL JSM5510 SEM.

Wound healing was assessed from the day 1 to 6 weeks postoperation. Serious wound complications were defined as numerous serous exudates, purulence, isolation of bacteria, disruption of wound, additional treatment required and prolonged hospital stay. Numerous serous exudates were measured as more than 10% of the length of the wound involved. Additional treatment included upgradation of antibiotics due to leg wound, drainage of pus under local anesthesia and debridement of wound under general anesthesia (6).

Leg pain was assessed using a Visual Analog Scale (7). The scale was a 100 mm evenly divided plain line with two end points of “no pain at all” and “worst imaginable pain”. The degree of pain was determined as the length of the line. Patients completed the pain score on the day discharge or 7 days postoperation (8).

The coronary multidetector computed tomography angiogram (CCTA) was performed 1-year after operation regardless of angina based on the patient’s consent or when the postoperation patient wanted. Some patients underwent this examination before 1-year postoperation because of recurrence of angina. One physician reviewed all the CCTA scans no matter the examination conducted in our Hospital or other hospital. Because the left internal mammary artery to the left anterior descending branch is adopted in all patients, and grafts to the right coronary artery have a worse patency rate. The SV grafts to the diagonal branch and left circumflex coronary artery (LCx), including all the obtuse marginal and ramus branches, were studied. Patency was defined as less than 70% stenosis and occlusion was defined as greater than 70% stenosis (9).

Table 1 presented the baseline characteristics of the patients. It was a predominantly male (75%, 75/100) study cohort, with an average age of 58.2±8.0 years. The baseline characteristics of patients who underwent EVH were similar to those patients who underwent OVH. However, there were more patients with smoking history in EVH group (86% vs. 50%, P<0.01). In addition, the patients of EVH group had a higher left ventricular ejection fraction (59.7±5.1 vs. 57.3±6.7, P=0.04). 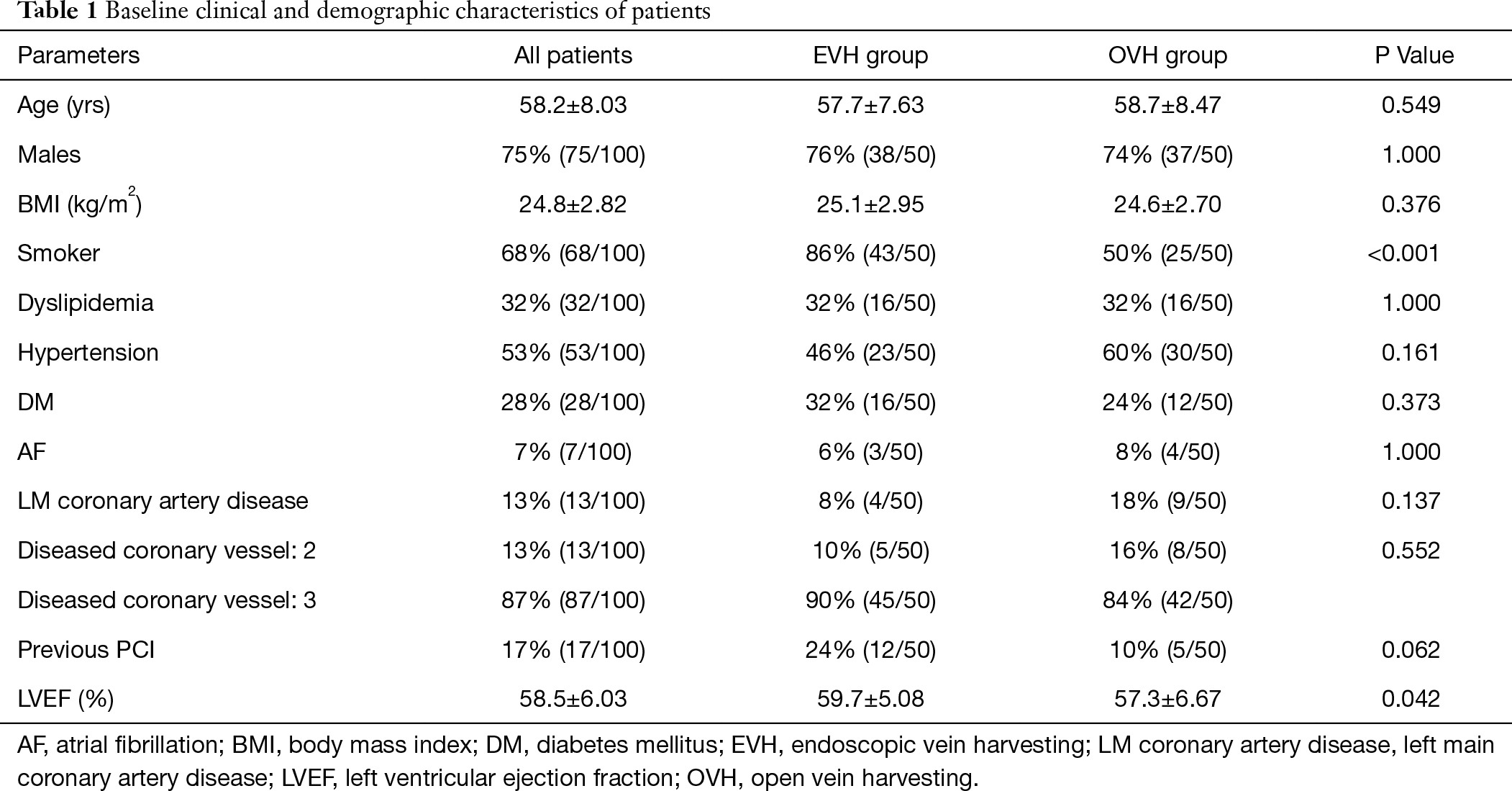 Vein harvesting variables and the continuity of SV endothelium 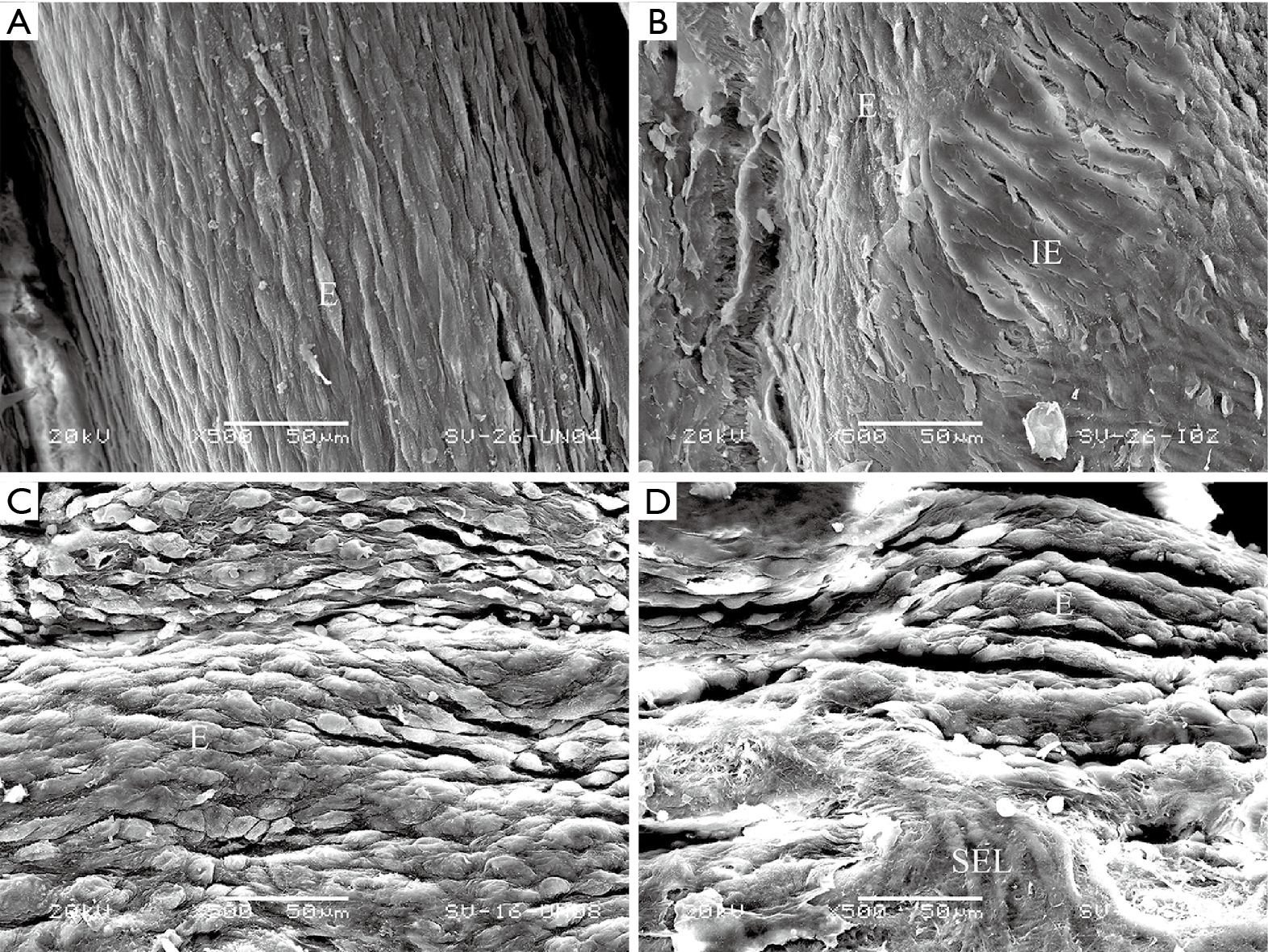 Table 3 presented the follow-up results. Ninety-nine patients (49 in the EVH group, and all 50 patients in the OVH group) accepted our questionnaire in the outpatient clinic or by telephone about 1 year after operation. Of the 99 patients, no death was found. There were no myocardial infarction (MI) or repeat revascularization reported during the follow-up period. Recurrence of angina was complained by five patients, 3 (6.1%, 3/49) in the EVH group and 2 (4%, 2/50) in the OVH group (P=0.98). There were 84 (43 in EVH and 41 in OVH) patients who took the MSCTA examination postoperation. The vein grafts of 5 (11.6%) patients in the EVH group to the left coronary artery were classified as occluded. While in the OVH group, 4 (9.8%) patients had their vein grafts to the left coronary artery occluded (Figure 3). No significant differences were found in the patency rate of vein-grafts among patients who underwent EVH and patients who underwent OVH (P=1). 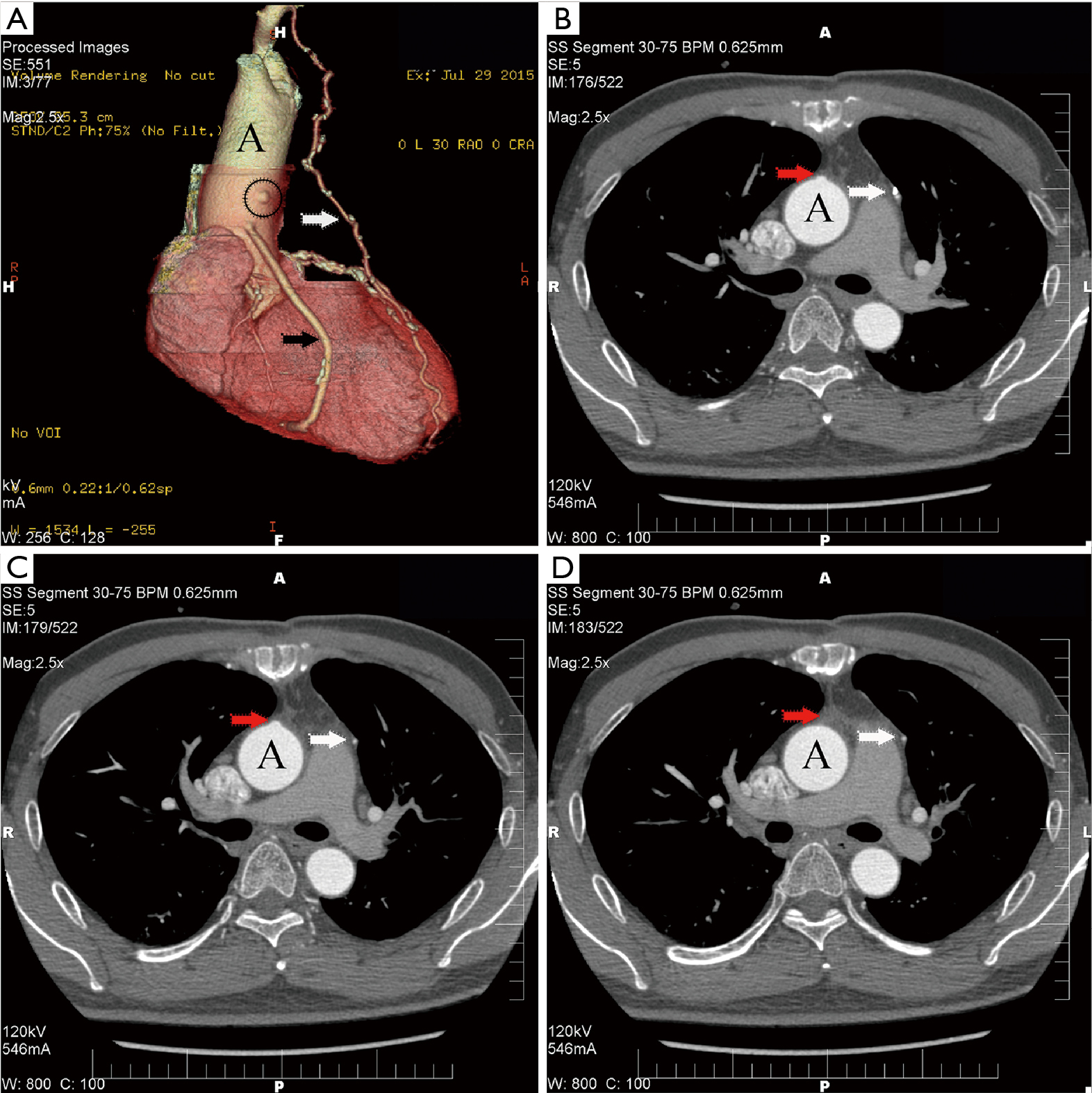 SV still remained the most common conduits in CABG (10). But SV grafts do not have the longevity as expected, and graft failures are associated with significant adverse cardiac outcomes and mortality (11). At the same time, an open longitudinal incision along the track of the great SV is associated with relatively higher rate of complications and discomfort (12). To improve the leg-wound healing, EVH as a minimally invasive technique was introduced in CABG procedures. In 2017, the International Society for Minimally Invasive Cardiothoracic Surgery published a consensus statement recommending that EVH be the “standard of care” (class I, level B) for patients who require these conduits for coronary revascularization (13). Nowadays, according to the Society of Thoracic Surgeons National Database, EVH is used in approximately 80% of CABG patients in the United States (14).

Nevertheless, it is unclear whether EVH is independently associated with adverse clinical outcomes and vein graft failure (15). In 2009, a secondary analysis of PREVENT IV trial by Dr. Lopes et al found that EVH was associated with higher risk of MACE (16). In 2012, an observational study conducted by Dr. Williams demonstrated no association of EVH with long-term mortality or a composite of death, MI or repeat revascularization (17). Then, we aimed to investigate the relevance of EVH with clinical outcomes, graft patency and endothelial injury. In our study, the rate of MACE at one year after operation showed no difference between EVH group and OVH group. There was also no difference in the one-year patency rate of SV graft to the diagonal branch or left circumflex coronary artery between the 2 groups. More than 93% of patients can perform their daily activities (NYHA class =1, 2) without angina.

Previous studies showed that injuries of SV endothelium could trigger early graft failure (18). So, we compared endothelial injury of EVH with that of OVH. Unlike previous research (19), we found no difference between OVH and EVH in endothelial integrities with SEM. Our study also demonstrated that intraoperative distension of SV grafts could break the continuities of SV endothelium. Exposing the subendothelial tissues or media to proinflammatory and procoagulant reactions led to early SVG failure (11). Therefore, high pressure distension more likely causes early SVG failure.

However, there are several limitations to our study. Our study enrolled only 100 patients and the follow up was completed at one year postoperation. We advised that EVH was not appropriate if SV was too superficial. It remains easy to isolate SV above the knee because of more adipose tissues. Keeping the dissection tip beside the main trunk of SV to maintain some adventitia remained very helpful to avoid injuries. So, EVH may not be suitable to every patient, especially in patients whose SVs are too superficial.

In conclusion, our study shows that EVH is not associated with worse clinic outcomes. Also found distension rather than EVH injures of the endothelium. At the same time, EVH showed good benefits in leg wound healing.

Funding: This work was supported by Beijing Science and Technology Program (China) (No. Z141107002514021) and Capital Research Funds for Application of Clinical Features Project.

Conflicts of Interest: All authors have completed the ICMJE uniform disclosure form (available at http://dx.doi.org/10.21037/jtd-20-250). All authors report grants from Beijing Municipal Science and Technology Commission, during the conduct of the study.

Ethical Statement: The authors are accountable for all aspects of the work in ensuring that questions related to the accuracy or integrity of any part of the work are appropriately investigated and resolved. This study was approved by the institutional review board and was performed in accordance with the Declaration of Helsinki and approved guidelines (Approval No.: 2015-652).