The standard of care first-line systemic therapy for extensive-stage small-cell lung cancer (ES-SCLC) is now a programmed death ligand-1 (PD-L1) inhibitor plus etoposide plus platinum (EP). There is no standard next line systemic therapy following development of progressive disease on this chemoimmunotherapy regimen. Topotecan and amrubicin, as well as the programmed death-1 (PD-1) inhibitors nivolumab or pembrolizumab have been approved as subsequent line therapies in different parts of the world. Nivolumab or pembrolizumab monotherapy are unlikely to be effective following development of progressive disease on first-line therapy with a PD-L1 inhibitor plus EP. Topotecan and amrubicin have limited benefit in this setting and significant toxicity (1-4). Recent clinical trials of lurbinectedin or the combination of temozolomide plus poly ADP ribose polymerase (PARP) inhibitors have shown encouraging response rates in patients with ES-SCLC treated in the second or subsequent line setting (5-8). In this review we summarize the data on these and other systemic therapy options for patients who develop progressive disease on first-line chemoimmunotherapy.

Lurbinectedin impairs the formation of ribonucleic acid (RNA) by limiting the binding of transcription factors to their promotors (5,6). This action may have antitumor activity in certain malignancies. Additionally, lurbinectedin decreases transcription within tumor-associated macrophages, which may lead to decreased tumor cell proliferation, decreased tumor cell survival, improved antitumor immunity and decreased angiogenesis (5,6).

Lurbinectedin is not approved for treatment of ES-SCLC. However, multiple clinical trials have evaluated lurbinectedin as either a single agent or in combination for second or subsequent line therapy of ES-SCLC (5,6,9). A new drug application has been submitted to the Food and Drug Administration (FDA) for lurbinectedin monotherapy in relapsed SCLC. A decision on this approval is expected by August 2020 (10). Additionally, an expanded access program for single agent lurbinectedin has recently opened. The data supporting the FDA new drug application are summarized below, as are trials that have evaluated lurbinectedin in combination with other chemotherapies.

A phase II study evaluated lurbinectedin monotherapy for ES-SCLC patients who had received ≥1 prior line of chemotherapy. There were 105 patients treated. Only 4 patients had a history of baseline central nervous system (CNS) metastases. The CNS metastases in each of these 4 patients were asymptomatic and previously treated. Patients with Eastern Cooperative Oncology Group (ECOG) performance status of 0-1 accounted for 92.4% of the study population. Only 7.6% of treated patients had received prior immunotherapy. Lurbinectedin was dosed intravenously at 3.2 mg/m2 every 3 weeks until development of progressive disease or other discontinuation criteria were met. The median follow-up was 17.1 months (6,11). 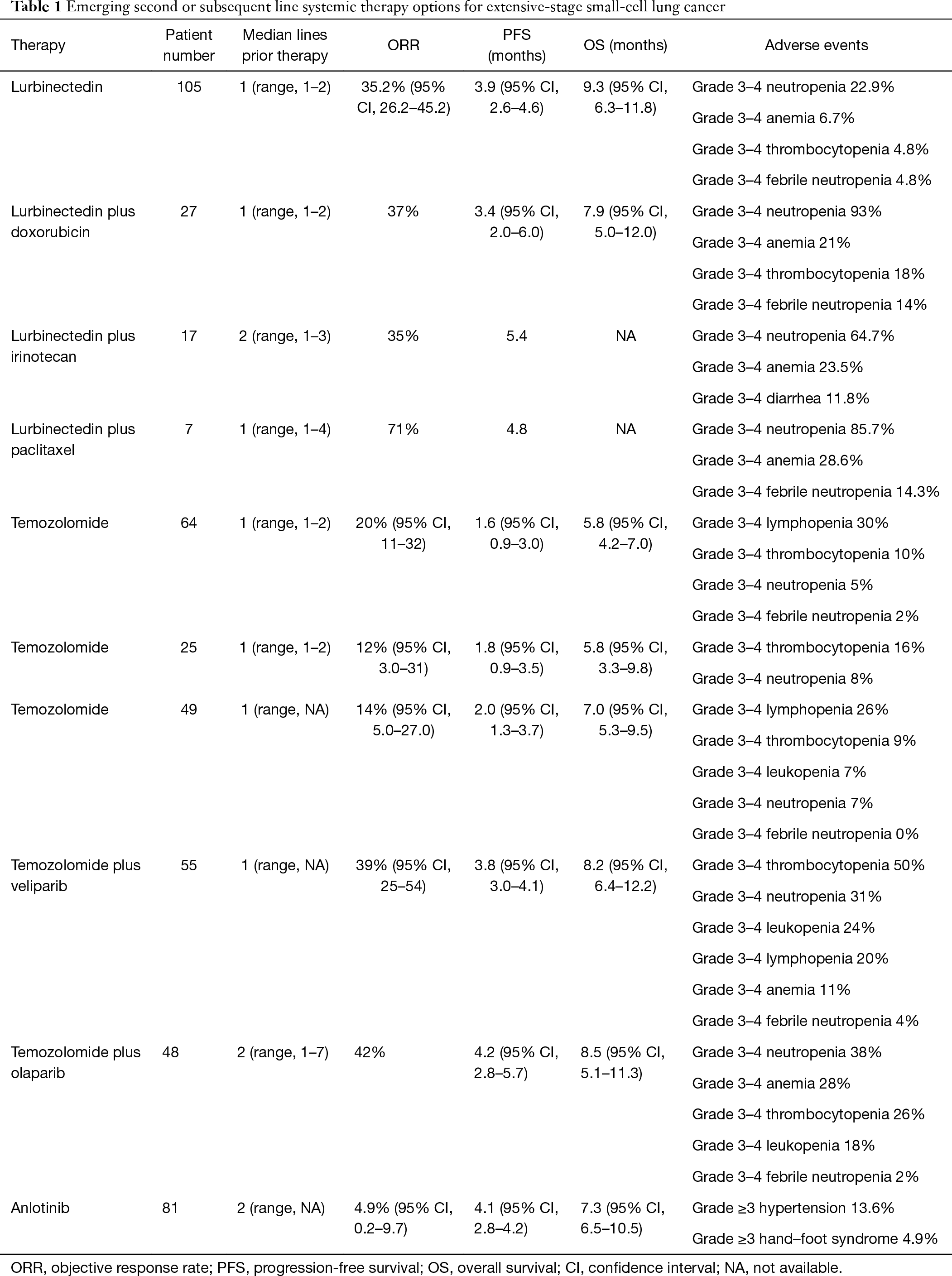 The ORR at the RP2D was 37%. The median PFS was 3.4 months and the median OS was 7.9 months. This regimen had a high amount of grade ≥3 adverse events, mainly consisting of cytopenias. Neutropenia was the most common grade ≥3 adverse event, with an incidence of 93% (Table 1) (5). It is important to note that primary prophylaxis with G-CSF was not administered with this regimen and perhaps should have been. The investigators on this trial state that the neutropenia was well managed with G-CSF and dose reductions (5).

The high response rates seen in this trial were encouraging and prompted a randomized phase III trial called ATLANTIS. The ATLANTIS study excluded patients with a CTFI of <30 days because of poor outcomes seen in prior lurbinectedin trials. Patients must have received first-line platinum-based chemotherapy in order to be eligible, but they could not have received other chemotherapies. Patients with a history of CNS metastases were allowed, but these metastases must have been stable and patients could not have been taking steroids for management of CNS disease. There were 613 patients enrolled. They were randomized 1:1 between doxorubicin 40 mg/m2 on day 1 plus lurbinectedin 2 mg/m2 on day 1 of each 21-day cycle or standard chemotherapy (topotecan or cyclophosphamide plus adriamycin plus vincristine). The randomization was stratified based on ECOG performance status, CTFI (≥180 versus 90–179 versus <90 days), CNS involvement, prior PD-1 axis inhibition and investigator preference. This study required primary prophylaxis with G-CSF because of high rates of neutropenia seen on the phase Ib trial with doxorubicin plus lurbinectedin (10,12). The final read out of this study is expected to occur during the third quarter of 2020 (10).

Lurbinectedin with other systemic therapies

Trials are being planned to evaluate lurbinectedin in combination with immune checkpoint inhibitors. Additionally, there is thought being given to evaluating this drug in the first-setting. Ongoing trials of lurbinectedin are indicated in Table 2 (12).

Temozolomide with or without a PARP inhibitor

Temozolomide is an alkylating agent of deoxyribonucleic acid (DNA). Temozolomide has good CNS penetration and has demonstrated efficacy in primary brain tumors (13,14). It has been evaluated in SCLC both as a monotherapy and in combination with PARP inhibitors (7,8,15,16).

Temozolomide or PARP inhibition as monotherapy

Temozolomide monotherapy has been evaluated in relapsed ES-SCLC at two separate doses, 75 mg/m2 on days 1–21 of a 28-day cycle and 150–200 mg/m2 on days 1–5 of a 28-day cycle. In these trials the ORR ranged from 12% to 20%. The median time to progression in these trials was 1.6 to 1.8 months. The median OS was 5.8 months. The main toxicities observed with monotherapy were cytopenias (Table 1) (15,16). With temozolomide monotherapy responses have been seen in evaluable brain metastases which have not been previously irradiated, with an ORR of 0% (0 of 8) at 200 mg/m2 days 1–5 and 38% (4 of 13) at 75 mg/m2 on days 1–21 (15,16). As monotherapy the PARP inhibitor talazoparib did not demonstrate good efficacy in relapsed SCLC with an ORR of 9% in 23 evaluable patients (17). Preclinical models suggest enhanced efficacy from combining temozolomide and PARP inhibition (18-20).

There is currently no test of SLFN-11 expression that is approved for use in human samples and larger sample sizes are needed to validate this potential biomarker. Similarly, it remains to be determined whether expression of SLFN-11 on archival tissue will have similar utility to predict efficacy of temozolomide plus PARP inhibition when compared to levels of SLFN-11 on new biopsies/fresh tissue. Whether SLFN-11 RNA expression or SLFN-11 protein expression by immunohistochemistry are better at predicting patients who may derive longer term benefit from this combination requires further study.

Amrubicin is a topoisomerase II inhibitor (4). It is an approved second-line chemotherapy option in some parts of the World for patients with ES-SCLC. It was compared to topotecan in a randomized phase III study. The investigator assessed ORR was numerically higher with amrubicin, 31% versus 17%; however, the median investigator assessed PFS and OS were not significantly different. Importantly, amrubicin was associated with more grade ≥3 infections and a higher incidence of febrile neutropenia (4).

The regimen of cyclophosphamide plus adriamycin plus vincristine (CAV) was compared to topotecan in a randomized study. CAV demonstrated similar efficacy as topotecan. However, symptom improvement was greater with topotecan (3).

Other chemotherapies have also been evaluated as second or subsequent line treatment in ES-SCLC: irinotecan, paclitaxel, gemcitabine, vinorelbine and others (21). While these therapies work for some patients, their outcomes are generally poor. The median PFS for these other chemotherapies ranges from 2 to 4 months and the median OS ranges from 4 to 7 months (21). These latter chemotherapies are sometimes used in patient management despite lacking formal approvals for ES-SCLC.

Anlotinib is a multi-kinase inhibitor that most potently inhibits vascular endothelial growth factor receptor, KIT proto-oncogene receptor tyrosine kinase, platelet derived growth factor receptor and fibroblast growth factor receptor. This drug has been evaluated as third or later line treatment in patients with relapsed SCLC. On a phase II study patients were randomized to anlotinib or placebo. Anlotinib was administered orally at 12 mg daily dosing on days 1–14 of a 21-day cycle. It is important to note that on this trial there were 40.7% of patients (33 of 81) on the anlotinib arm who were never smokers and 28.9% of patients (11 of 38) on the placebo arm who were never smokers. This high percentage of never smokers is uncharacteristic of a SCLC patient population and could have favorably biased outcomes. Approximately 63% of patients on this study were not platinum sensitive, with a relatively equal distribution between the two study arms. The percentage of patients having received prior immune checkpoint inhibition was not provided (22).

Other treatments and drugs in development

Other drugs in development and their potential efficacy in ES-SCLC will be discussed in a separate section of this focused issue.

Recently, SCLC investigators have proposed a classification schema of four molecular subtypes (25). The relationship that these molecular subtypes have in regards to the efficacy of the different systemic regimens discussed in this review will be important to investigate further (Figure 1). Such investigation may help with optimal selection of second and subsequent line systemic therapy options.

Provenance and Peer review: This article was commissioned by the editorial office, Journal of Thoracic Disease for the series “Small Cell Lung Cancer”. This article has undergone external peer review.

Conflicts of Interest: The author has completed the ICMJE uniform disclosure form (available at http://dx.doi.org/10.21037/jtd.2020.03.67). The series “Small Cell Lung Cancer” was commissioned by the editorial office without any funding or sponsorship. JMP served as the unpaid Guest Editor for the series and serves as the unpaid editorial board member of Journal of Thoracic Disease from Oct 2019 to Sep 2021. Advisory board/consulting role for AstraZeneca, Gerson Lehrman Group, Hengrui Pharmaceuticals, Novartis and Pfizer. Honorarium from Genentech and Takeda. Research funding from Pfizer to institution.