Accurate staging of lung cancer is paramount for directing treatment. After an internal audit suggested a higher than expected rate of synchronous multiple primary lung cancers (SMPLC), we have sought to evaluate and present the prevalence of SMPLC at our single, large academic center.

Lung cancer has been predicted to be the number one in cancer killer in the United states, and frequently presents with advanced disease not amenable to curative resection (1). Shifts in histological type and increased understanding of genomic alterations in lung cancer development have changed management of lung cancer; and earlier and increased detection with screening, and decreases in surgical morbidity and mortality over the last several decades have led to a potential increase in of surgical approaches.

Multiple studies and descriptions have been published in the past regarding SMPLC have been published. In 1924 the German physician Beyreuther described a patient with synchronous primary tumors (2). Martini and Melamed’s classic description and criteria were published in 1975 (3). However, not until recently has the clinical entity become a prominent theme in the collective clinical thought or staging guidelines (4). While past staging systems have tended to downplay the concept of synchronous multiple primary tumors (5), the 8th edition of the AJCC TNM staging for lung cancer now finally gives credence to the understanding of synchronous primary lung cancers by applying the highest clinical T descriptor of multiple tumors, followed by the number of total lesions (4).

We have published our perspective in the past (6), that patients with multiple primary lung cancers need careful staging, and most need surgery rather than medical therapy, resulting in an increase in therapy with curative intent. We use a modified Martini-Melamed criteria to aid our determination of synchronous primary lung cancers (Figure 1), along with careful histologic subtyping and occasionally genomic data.

Recent literature dating from the mid 80’s to the present time reports record incidences between as reported in various clinical series ranges from 0.2% to 8% (3.5–14% in autopsy studies) (7). However, we performed an internal audit after an anecdotal perception of an increased incidence of multiple lung cancers. This revealed a shockingly high true incidence of synchronous primary lung cancers. We now present our findings over the last 9 months at a tertiary academic center in Upstate New York.

All patients included in this study were suspected to have primary pulmonary neoplasms. After histological evaluation and final pathological staging, we found that three primary categories became apparent. Single non-small cell lung cancer patients made up 64% (N=53) of our population, synchronous primary lung cancer patients 20% (N=17), and patients with either metastatic lung cancer or extra-thoracic metastases 16% (N=13).

Patients were fairly similar between groups (Table 1), with about half of each group being male, most having smoking history, and the majority with multiple medical comorbidities. The majority of patients in the SMPLC and metastatic groups had dealt with previous extra-pulmonary cancers. Nine of 17 (53%) in the SMPLC group and 9 of 13 (69%) in the metastatic group had histories of previous extra-pulmonary cancers, including cancers of the mouth, tongue, prostate, skin, maxillary sinus, breast, kidney, and one with lymphoma. This contrasted with only 14.5% of the single lesion group having previous extra pulmonary neoplasms. Figure 2 shows a CT scan of a typical patient in the series. 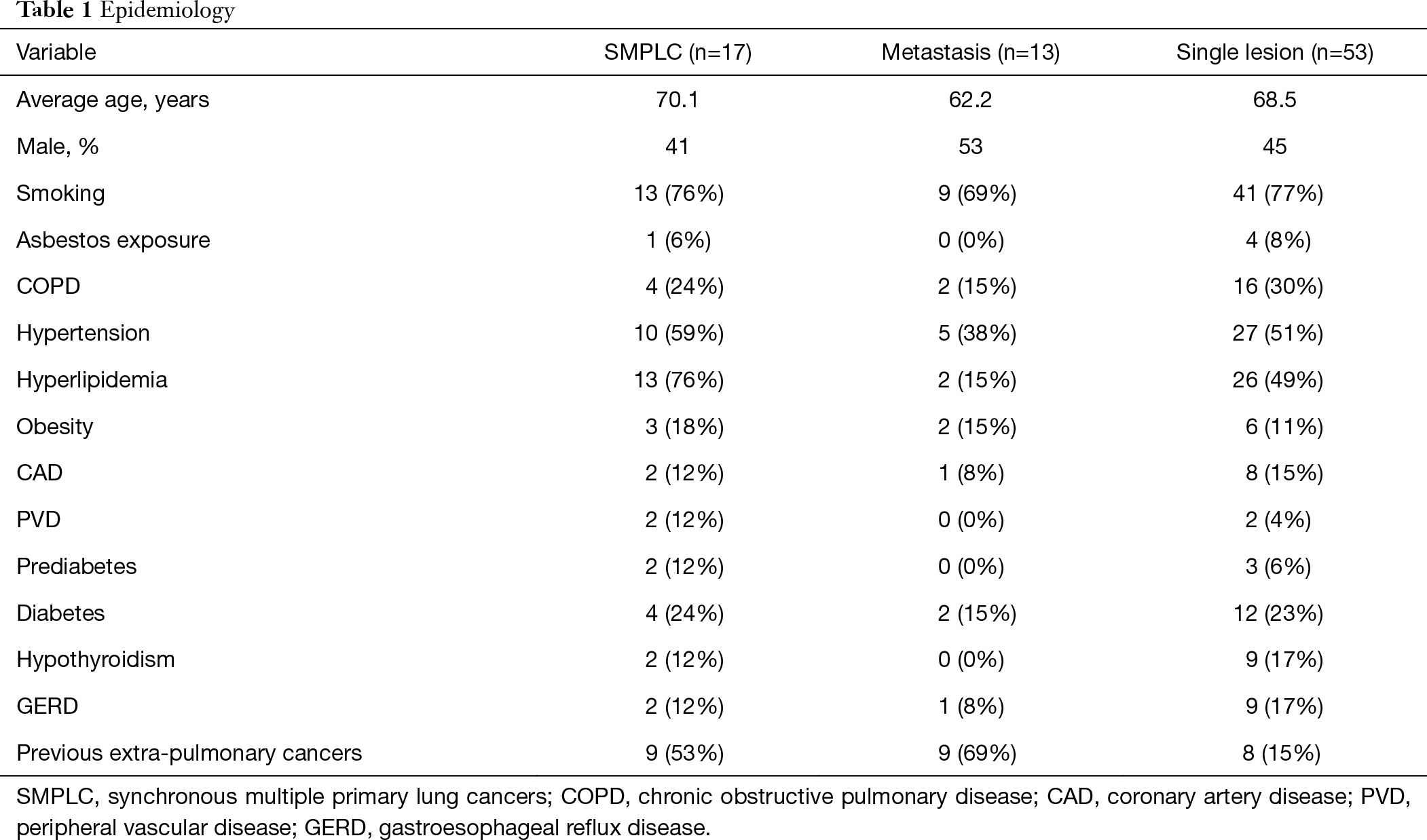 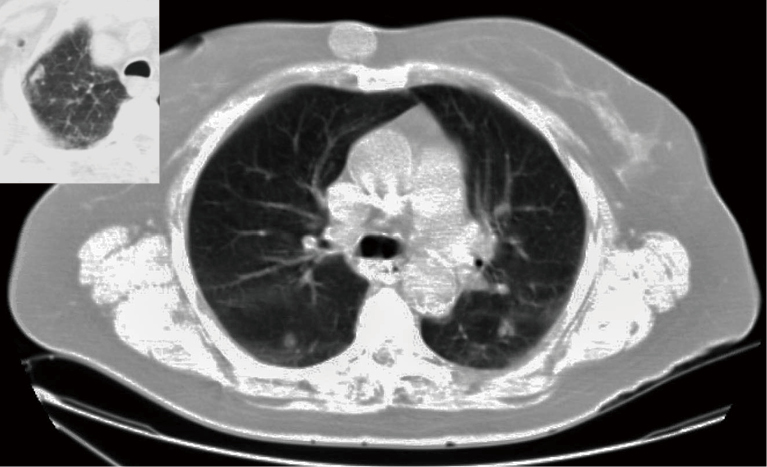 Among 83 patients who underwent surgical resection for primary lung cancer with the intention of cure, 17 (20.5%) had pathologically confirmed SMPLC. Of those, 15 (88%) were ipsilateral multiple lobe, 2 (12%) were bilateral, and 2 (12%) were ipsilateral same lobe with different histological subtypes. Of these 17 patients, 4 (24%) had a history of resected lung cancers more than 2 years previously, and were participating in lung cancer surveillance programs. Seven of 17 (41%) were the same histology, and 5 (30%) patients had more than 2 tumors (Table 2). All patients underwent R0 resection.

Surgical morbidity was low for all groups, and operative mortality in the entire group was 0% (Table 3). Median length of stay was 2 days. Complication rates were low. One patient in the SMPLC group, after undergoing her second resection on the contralateral side, required a 14-day hospital stay for a prolonged air leak necessitating a repeat VATS-decortication, In the metastatic group, one patient had a prolonged hospital stay of 5 days due to an air leak. Three patients in the single primary cancer group had major complications, with one patient suffering a stroke, subsequent with respiratory failure requiring a prolonged hospital stay of 7 days; one suffered a recurrent laryngeal nerve injury; and one patient suffered an iatrogenic, traumatic linear tear in the L-main bronchus from dual-lumen tube placement with corresponding air leak that resolved over the patient’s 4 day hospital stay without intervention. Minor complications such as transient (<1 day) air leaks, mild renal failure, or other medical complications that were easily remedied occurred in about 20% of all three groups.

Appropriate treatment of patients with multiple primary tumors has become increasingly important with the increased incidence of SMPLC. The reasons for the increase in perceived frequency of recorded synchronous or metachronous primary lung cancers appears to be multi-factorial, with improved imaging and surveillance, improved awareness, and advances in cancer therapy resulting in longer survivals and subsequently more time to develop more primary tumors. The outcome achieved by medical treatment alone for an additional lesion of the same histology in the ipsilateral chest in the current staging system is poor (8), but in today’s era of minimally invasive lobectomies and sublobar resections, successful surgical resection can be performed on many patients with low morbidity and mortality. Furthermore, surgical treatment, provided patients are reasonable candidates, is ideal primary treatment (9). Performing VATS for SMPLC is feasible, safe, and reproducible, and confers considerable benefit, as does bilateral approaches either simultaneously or sequentially. A group out of China used three principles in their decision making regarding SMPLC: first, surgical resection is the first choice in the absence of contraindications; second, the retention of healthy lung tissue and effective and complete removal of tumors are equally important; and third, if multiple primary lung cancers cannot be removed completely at one time, the tumor with the worst prognosis should be removed first. Their approach on 56 patients resulted in an average LOS of 5.4 days, post-op complication rate of 14.2% (all air leaks), and no 30-day mortality (10).

Multiple studies evaluating synchronous primary lung cancers suggest that survival is better than previously expected. In a purely observational study, Johnson in 1998 observed that, once a second primary is detected, 5-year survival has been estimated to be about 20% (11). However, improved outcomes have been reported in later studies. De Leyn et al. in 2008 published a retrospective review of 57 patients over 20 years who had sequential thoracotomies for resection of bilateral synchronous primary lung cancers. They found a median survival of 25.4 months, 5-year survival of 38%, noting significantly better outcomes than if these patients would have been treated only medically (12). Fabian published a multi-institutional study with a particular focus on synchronous primary non-small cell lung cancers, and found a cancer specific survival of 69% and overall survival of 53% at 5 years (13). These data support our premise that these patients behave clinically as independent primaries, not metastatic disease. Prognosis largely depends on time of detection, stage, and location of the second tumor, just as it does for an initial primary tumor, so ongoing surveillance is mandatory for this population of patients.

Accurate diagnosis, however can be difficult, even with expert pathological and histological subtyping (14,15). Genomic testing and next generation sequencing to enhance accuracy in diagnosis have been promising. In 2017, Saab et al. looked at a cohort of patients who had resected synchronous and metachronous primary adenocarcinomas, and found that the determination of intrapulmonary metastasis vs synchronous primary lung cancers occurred in 65% of patients with histology alone, but that the addition of genomic data (utilizing next generation sequencing) brought a conclusive diagnosis in 94% of patients (16). Multiple other recent papers suggest using alternate genetic evaluation with chromosomal rearrangement or next generation DNA sequencing differentiate multiple primaries from metastatic lung cancer (17,18). Even “blood biopsy” techniques using circulating tumor DNA have shown potential as surveillance or screening (19).

As we continue to follow the evolution of lung cancer presentation, we have become increasingly aware of the “cancerization effect” (20). Our patients have proven themselves to be prone to the development of neoplastic disease in multiple organ systems, as well as in the lungs. Consequently, we favor sub-lobar resections in patient’s with multiple tumors at presentation, in anticipation of their developing new tumors and requiring subsequent resections. This principle was born out in a patient in this series, who had an initial resection of 3 tumors in 2017, followed by the development of two more in 2018, and then finally 2 more in 2019, all of which were successfully resected, and were a mixture of adenocarcinomas and squamous cell carcinomas. While certainly an outlier, this patient’s story is fairly common in our practice, and there is a reported constant rate of new tumor development of around 1% per patient per year (11).

Though our local medical oncology community has begun to change their initial reaction of diagnosing metastatic disease when faced with a patient with multiple lung nodules, we continue to recommend that patients with more than one suspicious tumor nodule receive a thorough evaluation by a thoracic surgeon. We believe that not recognizing the high incidence of synchronous primary lung cancers results in under treatment and excess mortality of lung cancer patients.

This work has been supported by the Department of Cardiothoracic Surgery at Albany Medical Center.

Conflicts of Interest: All authors have completed the ICMJE uniform disclosure form (available at http://dx.doi.org/10.21037/jtd-19-3990). The authors have no conflicts of interest to declare.

Ethical Statement: The authors are accountable for all aspects of the work in ensuring that questions related to the accuracy or integrity of any part of the work are appropriately investigated and resolved. The study was approved by institutional ethics committee of Albany Medical Center (No. 5603), and its conduct meets the provisions of the 2013 Helsinki Declaration. Patients did not sign any informed consents, and due to the retrospective nature of the study, we did not obtain consent prior to reviewing their records. The patient’s personal data has been secured.