Inter-tumor heterogeneity of PD-L1 status: is it important in clinical decision making?

Clinical applications for precision medicine with molecular-targeted drugs and immune checkpoint inhibitors have dramatically improved treatment outcomes for non-small cell lung cancer (NSCLC) patients. However, because precision medicine is precise, small genetic or transcriptional differences between cancer cells may affect the efficacies of these drugs. Therefore, studies on intra- and inter-tumor heterogeneity are important in the era of precision medicine (1), especially when spatial heterogeneity can bias the biomarker test results (2).

Programmed death-ligand 1 (PD-L1) protein expression, assessed via immunohistochemistry (IHC), is the only Food and Drug Administration (FDA)-approved biomarker for anti-PD-1 and anti-PD-L1 immune checkpoint inhibitor monotherapies for NSCLC. An IHC assay using the 22C3 antibody was approved as a companion diagnostic test for front-line pembrolizumab, and an assay using the 28-8 antibody was approved as a complementary diagnostic test for nivolumab. However, no solid evidence exists regarding which tumor tissues should be used (e.g., primary lung tumors, lymph node metastases, or distant lesions) for PD-L1 IHC testing to predict anti-PD-1 and anti-PD-L1 blockade efficacy. Current clinical practice allows use of any of these tissue specimens for PD-L1 IHC testing, which is reasonable because previous “practice-changing” phase III trials of anti-PD-1 and anti-PD-L1 agents did not restrict tissues for PD-L1 testing. For example, an analysis of the prevalence of PD-L1 expression in NSCLC patients screened for enrollment in the KEYNOTE-001, -010, and -024 trials found that 1,727 patients had their primary tumor tissues tested, and 1,281 had their metastatic samples tested. Of these patients, 437 (25%) who provided primary lung tumor tissues and 369 (29%) who provided metastatic samples had high PD-L1 expression, which is defined as a tumor proportion score (TPS) of ≥50% (3).

In a study published in the Journal of Thoracic Disease in December 2019 (4), Saito and colleagues compared PD-L1 expression statuses detected via the 22C3 and 28-8 PharmDx assays between primary lung tumors and paired metastatic lymph nodes in 35 patients with surgically resected NSCLCs. The authors observed that the TPS categories (<1%, 1–49%, and ≥50%) were similarly distributed between the 22C3 and 28-8 antibodies in both primary lung tumors (concordance rate: 74%) and metastatic lymph nodes (concordance rate: 71%). This was expected because several harmonization studies for PD-L1 testing have shown that the 22C3 and 28-8 antibodies are interchangeable (5). The authors also found lower concordances of PD-L1 expression statuses between primary lung tumors and paired metastatic lymph nodes, at only 29% and 31% using the 22C3 and 28-8 PharmDx assays, respectively. Among samples with discordant results, PD-L1 status was higher in primary tumors in 51% (22C3) and 46% (28-8) of the cases, while it was higher in lymph node metastases in 20% (22C3) and 23% (28-8) of the cases. How should inter-tumor heterogeneity data on PD-L1 expression status be incorporated in daily clinical practice? Here, we discuss this point, referring to recent publications.

In addition to the current study (4), several research groups have evaluated inter-tumor heterogeneity in PD-L1 expression statuses between primary lung tumors and lymph node metastases (13-18). Notably, these studies used specimens from patients who underwent surgical resection, because both the primary tumor tissues and lymph node samples were available. Table 1 summarizes the major findings of these publications. Some results were inconsistent between studies, likely owing to differences in patients’ clinical backgrounds, differences in PD-L1 antibodies, cut-off values, conditions of the archived tissues, PD-L1 staining and evaluation qualities, and small sample sizes; however, a summary of these studies revealed some general trends. 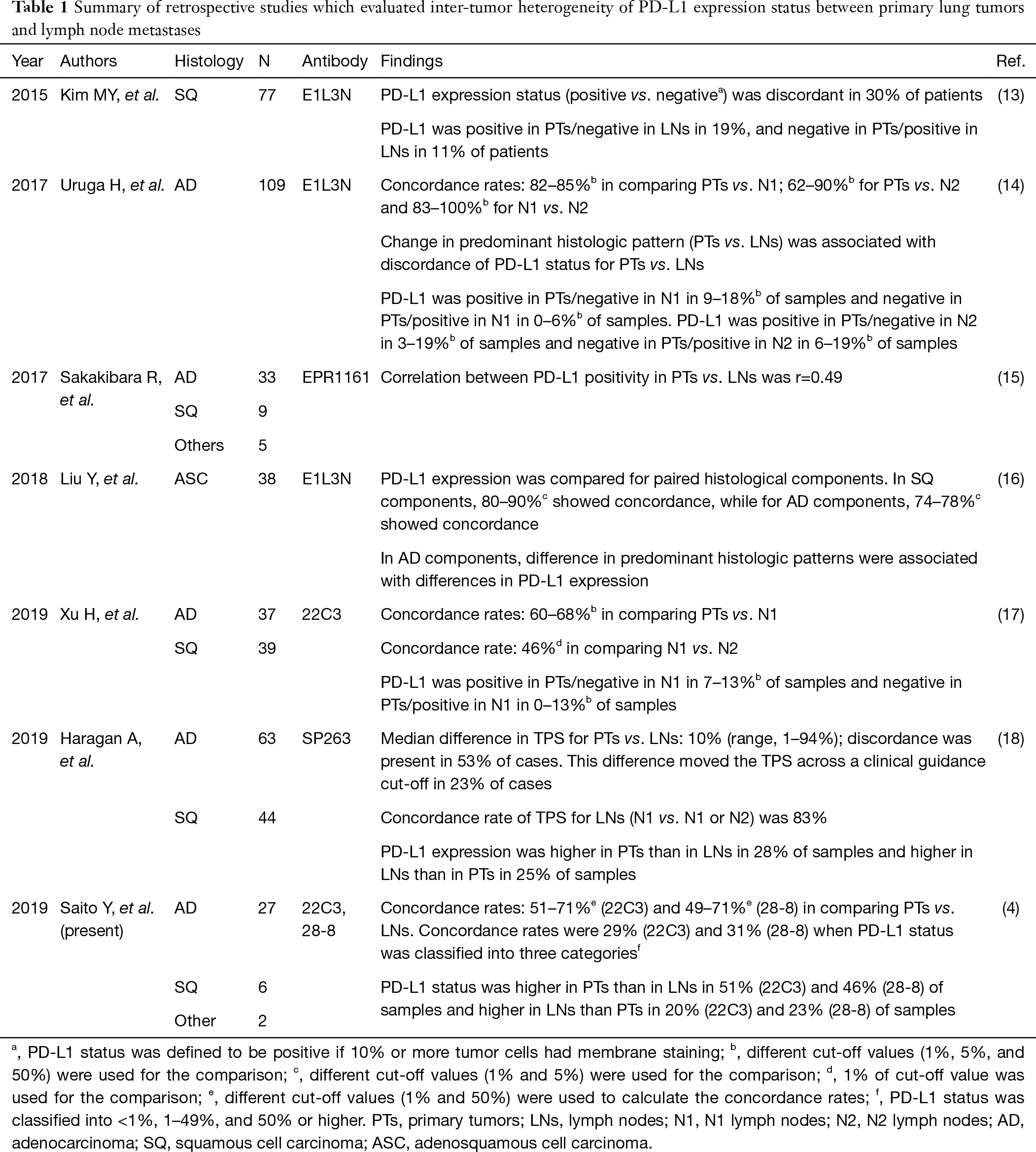 These studies used tissue specimens from NSCLC patients who underwent surgical resection. However, data on inter-tumor heterogeneity are especially important in patients with advanced-stage disease because these patients are candidates for immune checkpoint inhibitors. Because multiple biopsy samples are difficult to obtain from advanced-stage NSCLC patients, few data are available regarding inter-tumor heterogeneity of the PD-L1 expression status in advanced-stage NSCLC patients. Our previous study, which analyzed five autopsied patients with treatment-naïve lung cancer, showed that inter-tumor heterogeneity of PD-L1 and the tumor mutation burden (1) as well as other immune checkpoint molecules (22) also existed in advanced-stage NSCLC. We also found that immune-related pathways were downregulated in metastatic lesions (including lymph node metastases) compared with primary lesions (1).

The studies summarized in Table 1 show that inter-tumor heterogeneity of PD-L1 status occurs frequently between primary lung tumors and lymph node metastases. Thus, should inter-tumor heterogeneity be considered when treating NSCLC patients? Currently, as described above, both primary lung tumors and metastatic lesions are used for PD-L1 testing in clinical practice.

First, whether PD-L1 status in both primary lung tumors and metastatic lesions can predict the efficacy of anti-PD-1 and anti-PD-L1 blockade must be determined. A recent retrospective study by Schoenfeld and colleagues may answer this (23). Their analysis of progression-free survival (PFS) among patients receiving anti-PD-1 and anti-PD-L1 inhibitors compared high-PD-L1 patients (≥50%) and PD-L1-negative patients (<1%) by anatomic site where the biopsy was taken for testing. When PD-L1 testing was performed using tissue samples from primary lung tumors [hazard ratio (HR): 0.56, 95% confidential interval (CI): 0.43–0.74, P<0.01, n=190] or distant metastases (HR: 0.48, 95% CI: 0.31–0.73, P<0.01, n=110), high PD-L1 status was significantly correlated with longer PFS. The difference in PFS was marginally significant when PD-L1 expression status of lymph node metastasis was used (HR: 0.63, 95% CI: 0.38–1.04, P=0.05, n=61). These results support the current clinical practice of using both primary lung tumors and metastatic lesions for PD-L1 testing. However, it is unclear whether anti-PD-1 and anti-PD-L1 blockade will be effective when the first biopsy is PD-L1-negative and the second biopsy from a different tumor location has high PD-L1 expression.

We thank Traci Raley, MS, ELS, from Edanz Group (www.edanzediting.com/ac) for editing a draft of this manuscript.

Funding: This work was supported by a grant from the Uehara Memorial Foundation to K Suda.