Esophageal resection for malignant neoplasms is a procedure associated with high morbidity—in fact, morbidity rates have been reported to be as high as 59% (1,2). Common early postoperative complications include cardiac and pulmonary complications (arrhythmias, pneumonitis, etc.), anastomotic complications (leak and stricture), vocal cord paralysis, conduit necrosis or failure, and chyle leak (2). Thromboembolic events, infection, and wound-related morbidities further complicate the postoperative course. The median hospital stay after an uncomplicated esophageal resection at high-volume centers is around 8 days (3). Early postoperative complications prolong the hospital stay and increase the incidence of unplanned readmissions after a patient has been discharged (3).

The recent study “Incidence and risk factors of readmission after esophagectomy for esophageal cancer” by Park and colleagues at Yonsei University College of Medicine, South Korea reported a readmission rate of 13.4% within 30 days of discharge after esophageal resection (6). In their analysis, they found postoperative anastomotic leakage and wound-related problems to be significant risk factors predictive of readmission. They also reported a significant financial burden associated with readmission. Anastomotic strictures requiring balloon dilatation were reported in more than 30% of patients, and were the most common cause of readmission in their study, with other common causes being wound problems (18%), pneumonia (15%), and poor oral intake (10%). Additionally, bowel dysfunction (including delayed gastric emptying and prolonged ileus) were present in approximately 13% of cases. Despite 21% of patients developing vocal cord palsy postoperatively, this was not a significant factor for readmission. Furthermore, 38% of patients who were readmitted required intervention for their associated complication(s). In this study, Park et al. emphasized the importance of a postoperative intensive patient education program to prevent common complications, such as aspiration due to vocal cord palsy and gastric fullness due to delayed gastric emptying. The mean hospital stay in their study (25.6 days) was longer than the average length of stay reported by most major centers (12–13 days) (3,4,6).

Several authors have reported on factors associated with readmission after esophageal resection. Table 1 shows the reported factors associated with readmission in major published literature to date, with a pooled readmission rate of 16.6%. Anastomotic leak is the Achilles heel of esophageal resection surgery and is the major determinant of overall hospital stay, in-hospital morbidity, and mortality. Leak after anastomotic stricture rates as high as 56% have been reported in the literature (14). Increased surgeon experience, advancements in surgical anastomotic techniques, and use of staplers have lowered the incidence of clinically significant leaks, which is reflected in shorter hospital stays and greater patient satisfaction (1,14). In our opinion, stapled anastomosis by an expert surgeon is more reliable than hand-sewn anastomosis and achieves better short- and long-term outcomes (1). The effects of surgeon experience and technical innovation are further reflected in Table 1. The three studies that used the American College of Surgeons National Surgical Quality Improvement Program database showed a decreasing trend of readmission rates with the inclusion of more recent database entries. A similar trend is visible for patients in the Surveillance, Epidemiology, and End Results database as well. Hu and colleagues included a larger proportion of patients before 2012 and reported a higher readmission rate than Fernandez and colleagues (8,10). 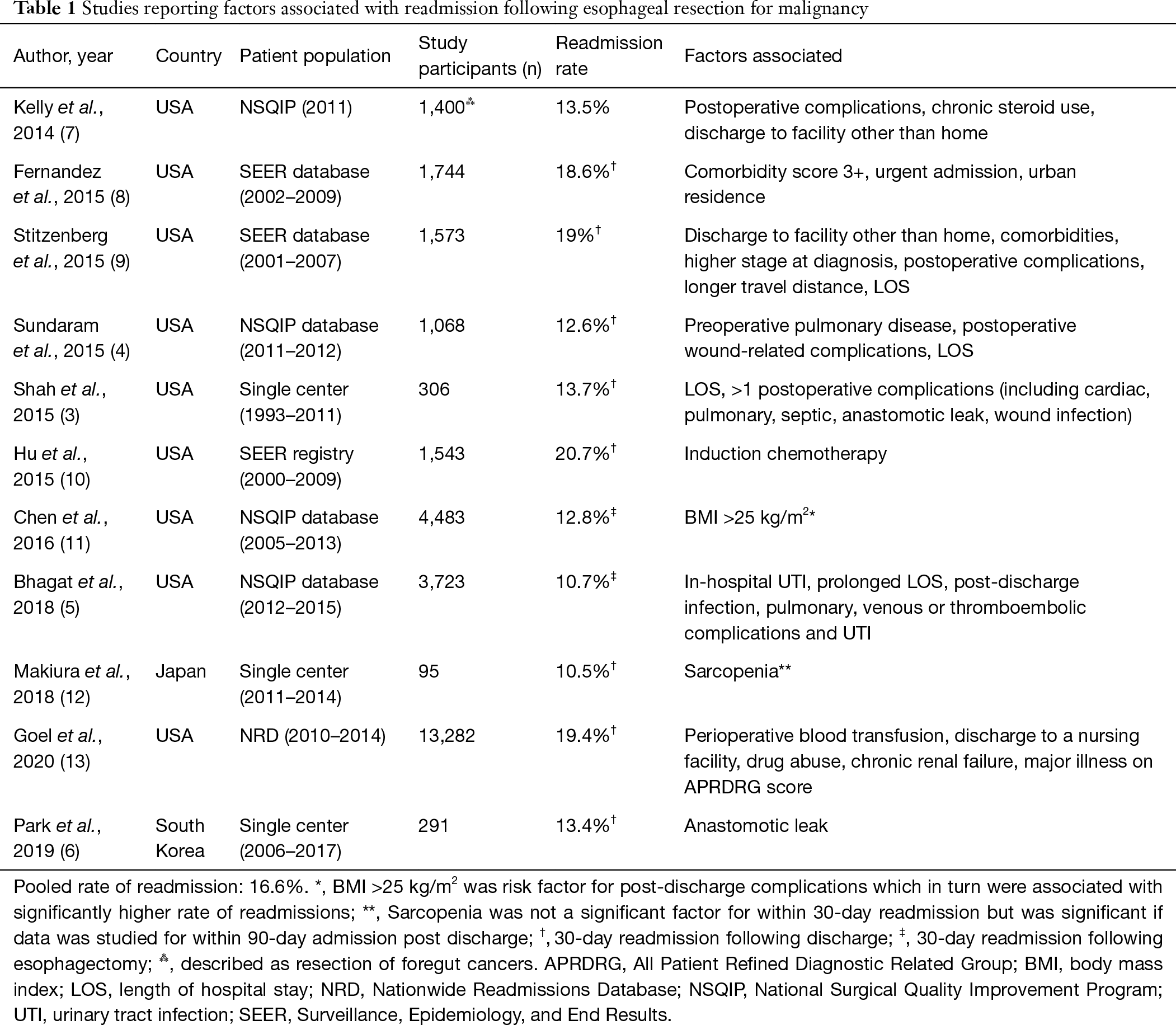 A minimally invasive technique for esophageal resection surgery has become the standard of practice. This technique has been reported to have better outcomes in terms of perioperative complications and in-hospital mortality; however, studies have shown no significant improvement in bowel-related complications, anastomotic leak, or recurrent laryngeal nerve palsy with the minimally invasive approach (15,16). In addition, many centers are now adopting enhanced recovery after surgery (ERAS) protocols to enhance patient outcomes. A pooled analysis of randomized trials showed shorter hospital stays and decreased rates of anastomotic leak with the use of an ERAS protocol; however, there has been no significant effects on rates of postoperative complications and readmission after esophagectomy (17).

Unsurprisingly, co-morbidities and poor functional status at the time of admission are major risk factors for a poorer overall outcome and increased chances of readmission (8,13). Most patients undergoing esophagectomy for treatment of esophageal adenocarcinoma in the US are generally older than 60 years of age. In addition, patients diagnosed with squamous cell carcinoma tend to be sarcopenic and cachectic. These are potentially non-modifiable risk factors. However, patient education and nutritional build-up in the preoperative phase should decrease the overall impact of these factors. In addition, detailed counseling of patients in the clinic as well as on the day before surgery may help level patients’ expectations about common postoperative complications and required lifestyle changes. Wound complication is one of the major reasons for emergency room visits after discharge. Proper wound care and thorough wound assessment before discharge may decrease readmission rates due to wound complications. Wound complication is a potentially modifiable risk factor.

The authors are grateful to Clare Sonntag, who provided expert editorial assistance.

Conflicts of Interest: Both authors have completed the ICMJE uniform disclosure form (available at http://dx.doi.org/10.21037/jtd-20-1670). The authors have no conflicts of interest to declare.