Lung segmentectomy is increasingly performed for small lung lesions (1). Lung resection requires physical reduction of the lung parenchyma, and the extent of the resection must achieve a balance between the removal of diseased lung tissues and the retaining of lung function. While segmentectomy preserves respiratory function, its performance requires a high level of skill.

Accurate identification of the lung-segmental area is critical, and 6 main methods for marking the separation line have been described in the report by Andolfi et al. (2). These include anatomical methods involving the inflate-deflate line (3), selective resected segmental inflation (4,5), imaging with indocyanine green (ICG) (6), injection of endobronchial dye (7), and non-anatomical marking methods, such as virtual-assisted lung mapping (VALMAP) (8) and three-dimensional multidetector computed tomography (3D-MDCT) (9).

Recently, the use of ICG methods for lung segmentectomy has increased with the development of video associated thoracic surgery (VATS) (10). However, allergic reactions to the intravenous injection of ICG are possible and the cost of the equipment incorporating ICG video systems is high.

The inflate-deflate-line method is a simple method for visualizing the target lung-segmental area (3-5). However, improvements are still required for the method of air supply and bronchus selection. Therefore, we investigated two methods of delivering air to target bronchi, jet ventilation under the bronchoscope and use of a catheter to deliver air to peripheral bronchi from the operative field (“selective bronchus-blowing”). We examined these methods of intraoperative bronchial air delivery and verified their effectiveness.

We recruited all patients who underwent lung resection by marking the inflate-deflate line in pulmonary segmentectomy for lung tumors with the selective bronchus-blowing method at Tokyo Medical and Dental University Hospital between April 2010 and August 2017. This study was approved by the ethics committee of the university in April 2010 (No. M2000-1097). Informed consent was obtained from all patients.

Our VATS procedure for early-stage lung cancer involved three skin incisions for access, without cutting the muscles or ribs. One 3–4-cm incision was created for manipulation and the other two incisions created access ports for a 1-cm insertion of a thoracoscope or long thoracic instrument. The choice of anterior or posterior thoracotomy was made according to surgeon’s preference and patient’s performance.

For both approaches, all bronchi and vessels within the target area were isolated and resected. The intersegmental plane was identified using either high-frequency jet ventilation (HFJV) or the bronchus-blowing method. In HFJV, air was delivered to target bronchi using the HFO JET VENTILATOR (MERA, Tokyo, Japan) (Figure 1A), operated at a working pressure of 2 kg/cm2 (4). Target bronchi were tied and severed using silk sutures or staples to maintain segment ventilation. For the bronchus-blowing method, target bronchi were identified and cut immediately; peripheral bronchi were then threaded and raised. A 20G plastic cannula was inserted directly into peripheral bronchi, and compressed air (0.01 Mpa) was delivered to identify the inflate-deflate line (Figure 1B).

Figure 1 Two technique of air supply for target bronchi in this study. (A) HFJV, air is delivered to target bronchi using the HFO by anesthesiologist. (B) Selective bronchus-blowing, A 20G plastic cannula is inserted directly into peripheral bronchi, and compressed air (0.01 Mpa) is delivered to identify the inflate-deflate line. HFJV, high-frequency jet ventilation.

Target segmental/subsegmental lung parenchyma under the inflate-deflate line were resected using a stapler, with a margin of at least 2 cm around the tumor to prevent local recurrence, and fibrin glue was applied to repair any air leaks, if necessary.

We changed the method of segmentectomy when complete surgery was not possible using the air-flow methods, and immediately performed lung resection while confirming the pulmonary vein routes.

Background lung and intraoperative findings were scored and classified by the criteria described in Figure 2. For statistical analysis, patients were divided into two groups for each factor. 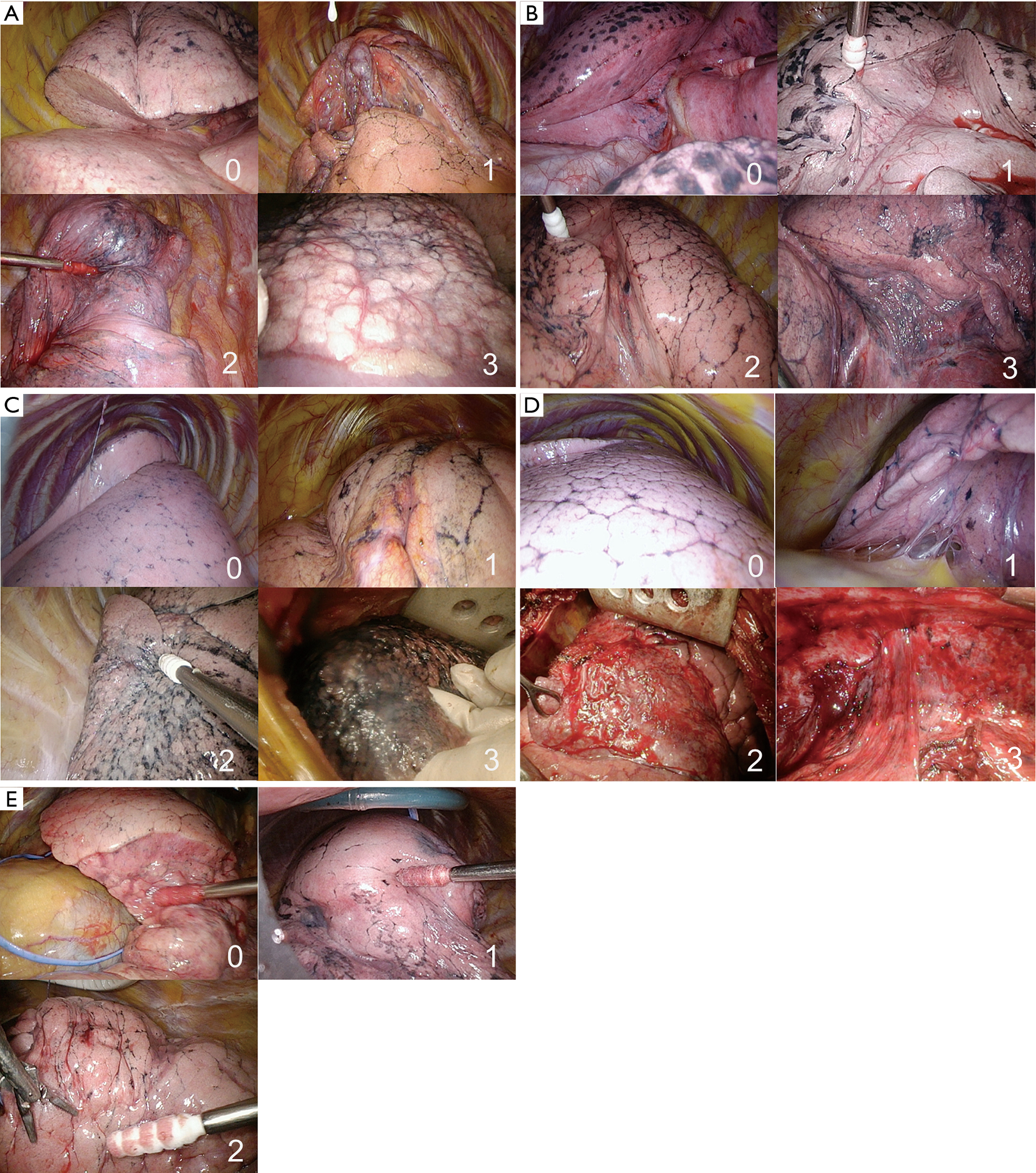 Evaluation of the inflate-deflate line

The statistical significance of the ventilation method was assessed using the Student’s t-test. χ2 tests or Fisher’s exact tests were performed to assess the associations between HFJV and bronchus-blowing methods and clinicopathological factors, and success and failure in inflate-deflate line identification and complete segmentectomy. A P value <0.05 was considered to indicate statistical significance. All statistical analyses were performed using Stat View version 5.0 (SAS Institute Inc., Cary, NC, USA).

Of the 86 patients finally enrolled (51 male, 25 female), 45 underwent surgery with HFJV and 41 with bronchus-blowing. Resection was performed for lung cancer in 72 patients, metastatic lung cancer in 12, and benign tumors in 2 (Table 1).

The number of target bronchi in complex-type segmentectomy was higher in the bronchus-blowing group than in the HFJV group (P=0.03). However, there were no significant differences between the two groups in terms of the incidences of emphysema and interstitial pneumonia, anthracosis, poor lobulation, and pleural adhesion. 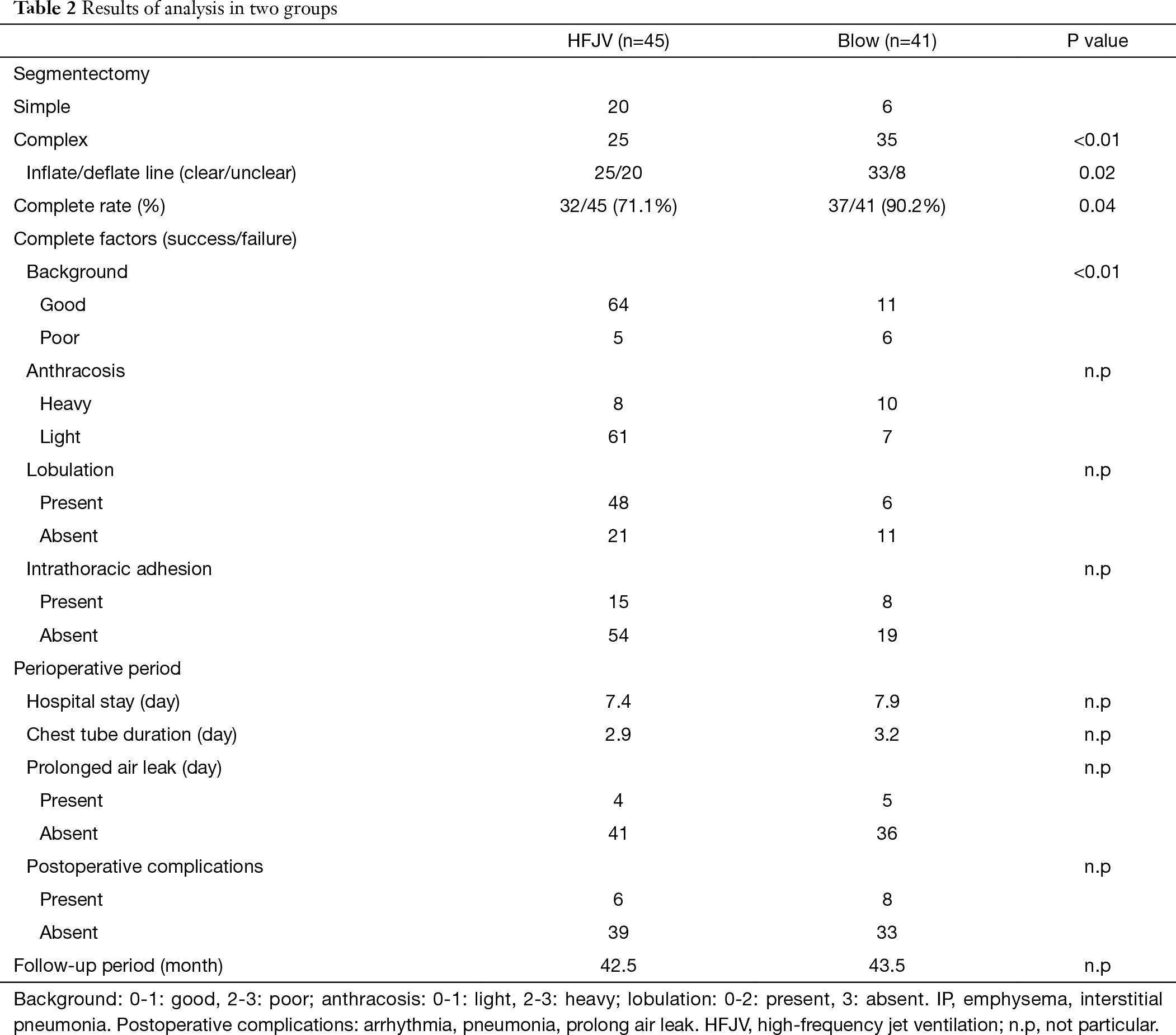 There were no significant differences between the two groups in terms of the length of the hospital stay, chest tube duration, prolonged air leak, and postoperative complications. Among all patients, the median follow-up period was 43 months; there was no significant difference between the two groups in the follow-up period (Table 2).

It was difficult to guide the air supply to upper lobe bronchi and B6 in the HFJV group. In contrast, in the bronchus-blowing group, it was easy to insert the catheter into the target bronchus if it could be held firmly.

No pathologically positive surgical margins were identified in either group. Both groups remained free from local recurrence.

Several methods for marking the dissection line in segmentectomy have been reported (2,11,12), and recent developments in thoracoscopic surgery have led to an increase in segmentectomy using ICG. Additionally, improvements in the light source for ICG have further advanced this method (13,14). However, ICG has a risk of an allergic reaction due to the use of iodides and requires expensive equipment, which limits its utility. Endobronchial dye injection does not require an air supply; however, there is a risk of a lack of uniform dispersion in subsegments (7). Segmentectomy using non-anatomical marking with VALMAP has been shown to achieve excellent results when combined with preoperative marking on the lung surface via bronchi using ICG (15,16). However, this is limited by the risk of pneumothorax and the possibility of a marking failure at the time of the marking. Although 3D-MDCT is useful for preoperative simulations and intraoperative anatomy confirmation, additional equipment is required to determine the inflate-deflate line (7). The inflate-deflate-line method has been described as an anatomical method in several reports (2-5), and it is limited by a narrow working space in VATS. Finally, selective resected segmental inflation identifies the anatomical inflate line with increased working space in VATS. However this method requires skilled anesthesiologists (4).

Our department routinely uses HFJV or the insertion of a catheter into target bronchi for evaluation of the inflate-deflate line. The “bronchus-blowing method” allows easy adjustment of the air-flow rate and insertion of the catheter into the target bronchus. However, there is the risk of complications, as the insertion of the catheter may cause a pulmonary air embolism, which has been reported following the direct puncture of the bronchus through the use of a butterfly needle (17). To avoid such complications, we apply a thread to the peripheral side of the isolated bronchus, and flow air intrabronchially once the target bronchus has been isolated. In the present study, we did not observe any serious complications, such as overexpansion, lung injury, or pulmonary air embolism.

In the future, we aim to develop a method of segmentectomy involving a new bronchus-blowing device.

This study was a single-center study with a small sample size. Future collaborative research involving larger study populations may provide further insight into the identification of the inflate-deflate line. Second, as the inflation was not always performed by the same anesthesiologist, there may have been variation in the inflation technique. Third, as this was a retrospective study, patient bias may exist.

In the present study, we analyzed the utility of two methods of intraoperative selective bronchial air supply for the identification of lung segments. We found that the bronchus-blowing method easily enabled effective visualization of the segmental area within the operative field. In the future, we intend to validate our proposed approach of segmentectomy using a dedicated catheter for the bronchus-blowing method of ventilation.

Conflicts of Interest: All authors have completed the ICMJE uniform disclosure form (available at http://dx.doi.org/10.21037/jtd.2020.04.35). The authors have no conflicts of interest to declare.

Ethical Statement: The authors are accountable for all aspects of the work in ensuring that questions related to the accuracy or integrity of any part of the work are appropriately investigated and resolved. This study was approved by the ethics committee of Tokyo Medical and Dental University (M2000-1097), and informed consent was obtained from all patients.