Anemia is a frequent finding in cancer patients. About 38% of lung cancer patients have anemia. Cancer-related anemia results from various conditions such as malnutrition, disease progression, renal or bone marrow involvement, coexisting inflammation, and oncologic treatment including chemotherapy and radiotherapy (1,2). Cancer cells can produce inflammatory cytokine such as interleukin-6 (IL-6) that can directly and indirectly lead to anemia by inhibiting erythropoiesis (3). Proinflammatory cytokine, mainly IL-6 promote alterations in erythroid progenitor proliferation, erythropoietin production and survival of circulating erythrocytes. Cancer related anemia is commonly occurred in patients at advanced disease and advancing age. Prevalence of anemia differs among cancer types, and lung cancer, gynecologic or gastrointestinal tumors are highly accompanied (4).

Patients were eligible if they were diagnosed from January 2009 to February 2016 with histologically confirmed, primary NSCLC [International Classification of Diseases for Oncology (ICD): C34.X] and EGFR mutation positive advanced NSCLC treated at our institutions. Use of TKI was investigated using drug codes for iressa, gefitinib, or afatinib during study period. Patients who were transferred to other centers or treated with EGFR-TKI as 2nd line were excluded. The study flow is summarized in Figure 1. The follow-up period ended on December 31, 2017.

Baseline demographics and clinical outcomes were compared between patients with anemia and non-anemia. We used Pearson’s chi-square test to compare discrete variables and Student’s t-test or analysis of variance to compare continuous variables. The Mann-Whitney test was used to compare median value. Hazard ratios (HRs) and corresponding 95% confidence intervals (CIs) were calculated for predictors that were significant in multivariate Cox regression analysis. A two-sided P value <0.05 was considered to be statistically significant. All statistical analyses were performed using SPSS for Windows software (ver. 20.0; IBM Corp., Armonk, NY, USA).

Overall, 290 patients were diagnosed with NSCLC harboring activating EGFR mutations and treated with EGFR-TKI, of whom 104 met the exclusion criteria (transferred to another medical center or treated with EGFR-TKI as 2nd line treatment). Thus, 186 patients were finally included in our analysis (Figure 1). The mean age of included subjects was 67.51±11.65 years (range, 39–97 years). There were 64 (34.4%) males. Of all included patients, 86 (46.2%) and 100 (53.8%) were classified into anemia and non-anemia groups, respectively. In anemia patients, 15 (8.1%) had moderate and 69 (38.2%) had mild severity of anemia based on the scoring system of the National Cancer Institute and the National Institutes of Health. In patients with anemia, we compared these two groups and explored clinical factors predicting OS. Total and median follow-up time were 19.4 and 15.2 person-months, respectively. 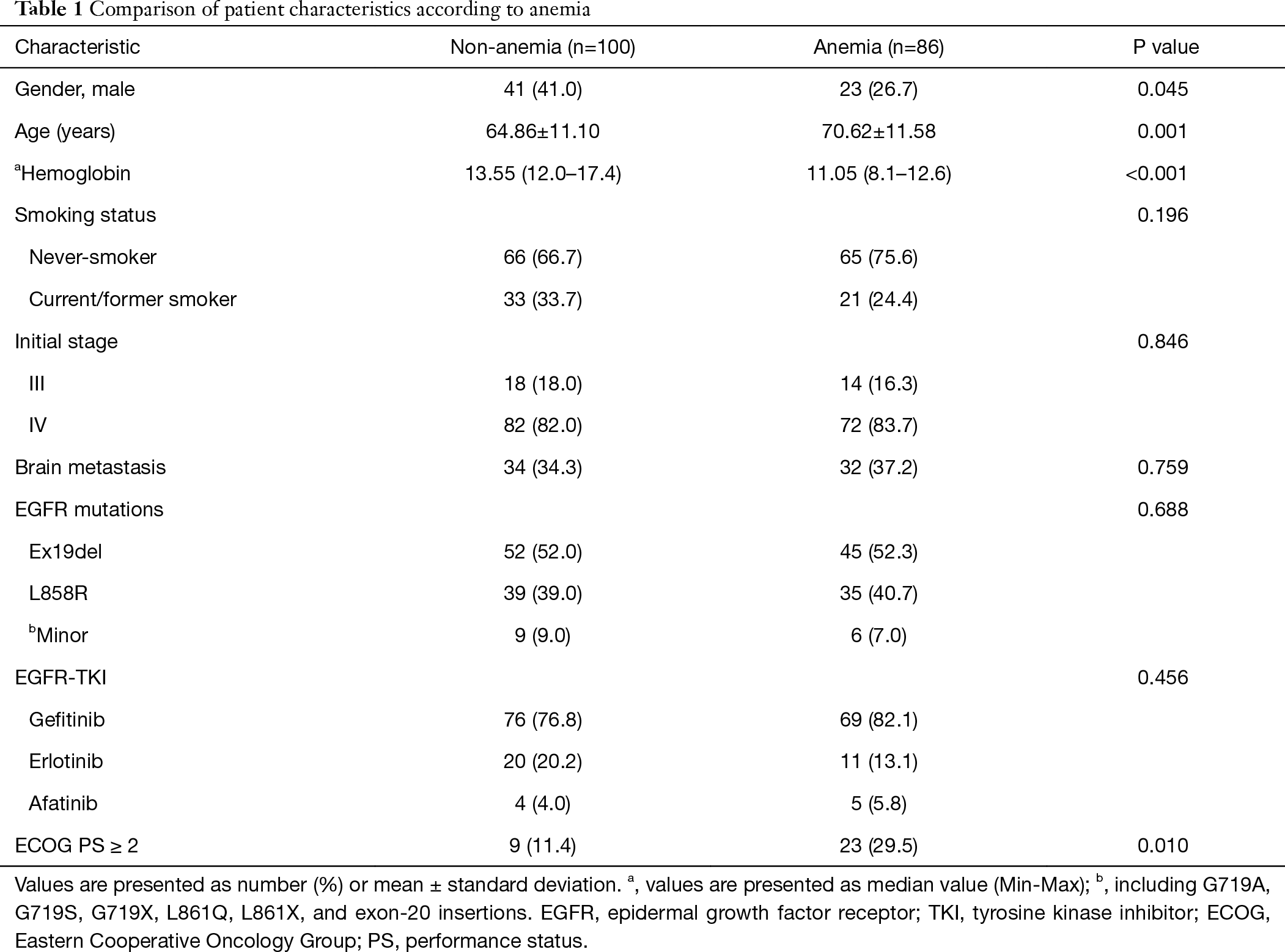 Table 1 Comparison of patient characteristics according to anemia
Full table

Figure 2 Kaplan-Meier curves for overall survival according to presence of anemia at diagnosis (A) and the severity of anemia (B) in non-small cell lung cancer patients with epidermal growth factor receptor mutation. 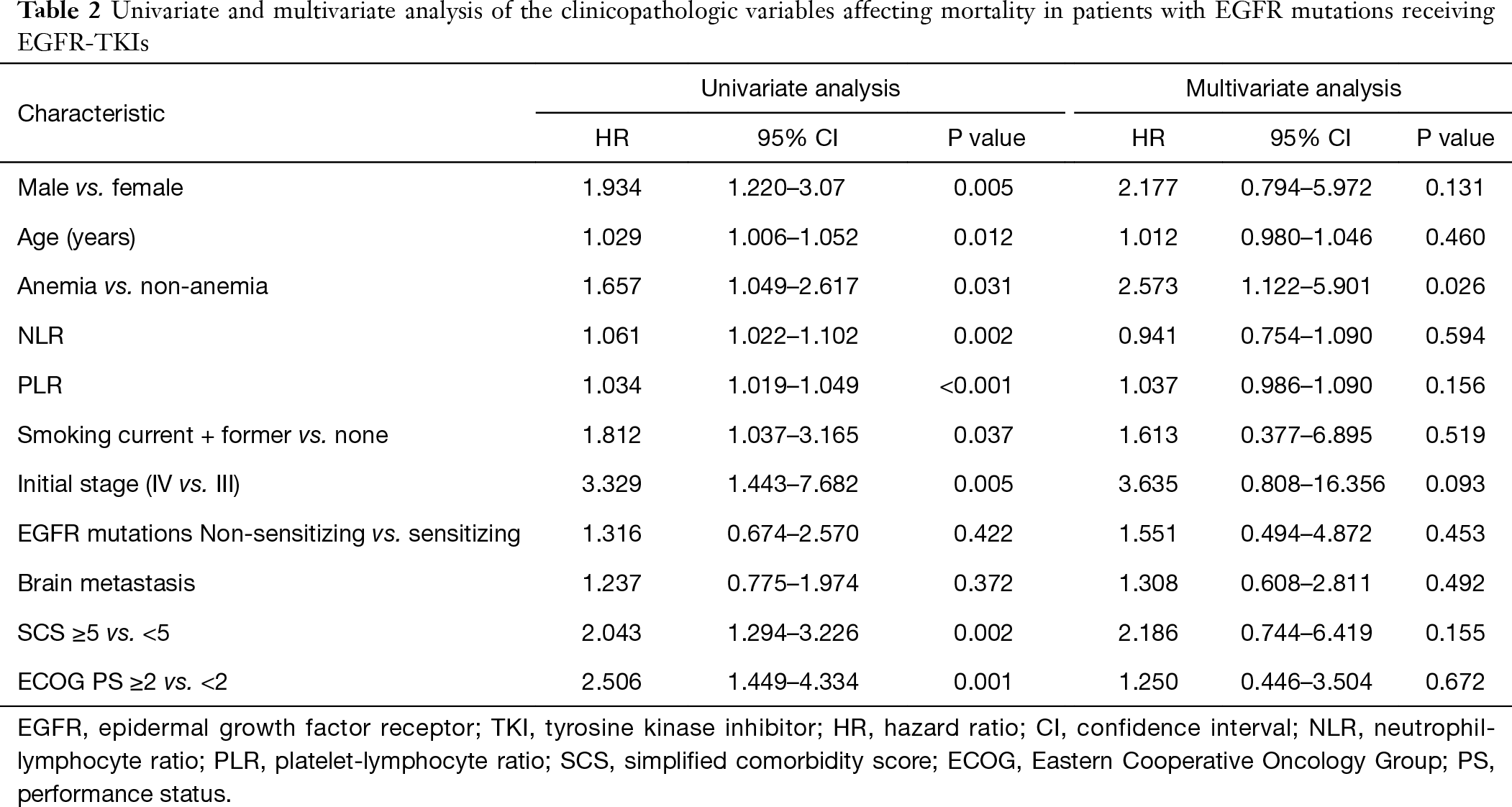 We compared clinical outcomes of patients with NSCLC harboring activating EGFR mutations treated with EGFR-TKI based on hemoglobin levels and explored prognostic clinical factors for treatment outcomes. In the present study, we found that 46.2% of 186 cancer patients had anemia at the time of diagnosis. We also found that the proportion of male was lower in the anemia group while poor PS and mean age were higher in the anemia group. Patients with anemia displayed shorter median OS than those with non-anemia. When patients with anemia were divided into mild and moderate anemia subgroups based on the severity of anemia, the moderate anemia group had the shortest OS among the three groups. In multivariate analysis, anemia was only independent factor for poor OS.

Anemia is a common hematological manifestation of cancer (1,2,18). Anemia is considered a side effect associated with chemotherapy. However, many cancer patients already have anemia before the start of any treatment (18). Pre-treatment anemia can negatively influence clinical outcomes in various types of malignancies including soft tissue sarcoma, pancreatic cancer and ovarian carcinoma (19,20). Low hemoglobin contributes to inadequate oxygenation of squamous cell carcinoma of the head and neck and increased resistance to radiotherapy (21). In lung cancer, anemia at diagnosis of the disease is associated with reduced median survival time (11). Pre-treatment anemia is associated with poor survival and non-local disease progression in patients with SBRT (10). Peri-operative anemia and blood transfusion for anemia correction are also associated with shorter recurrence free survival and OS after NSCLC surgery (9).

There are many causes for anemia. It involves nutritional status and other comorbidities. A direct link between anemia and poor prognosis in NSCLC patients is difficult to explain. One possible mechanism is inflammatory cytokine IL-6. IL-6 is a cytokine that plays an important role in many chronic inflammatory diseases. Most NSCLC cell lines produce IL-6 (3). IL-6 expression is involved in the regulation of tumor growth and metastasis. Activation of the IL-6R/JAK1/STAT3 pathway is known to induce resistance to irreversible EGFR-TKI in NSCLC harboring T790M (24). IL-6 is also a potent inducer for the production of hepcidin, a key regulator of iron metabolism (25). Elevation of hepcidin can lead to reduction in iron levels and results in anemia (26). Higher hepcidin levels are also associated with more aggressive disease (27).

Angiogenesis is a major prognostic factor in cancer. It is regulated by vascular endothelial growth factor (VEGF). Clinically, cancer patients with elevated levels of VEGF have worse prognosis compared to patients with normal VEGF levels (28). Tumor hypoxia and serum concentration of VEGF are strongly correlated with each other, presenting a main stimulus for angiogenesis in tumors (29). Also, anemia and poor tissue oxygenation are associated in head and neck cancers (21). In patients with untreated solid cancers of various malignancies including head and neck, cervix, rectum, and lung cancers, anemic patients have elevated levels of VEGF (30).

EGFR and VEGF signaling pathways are closely connected to each other. The expression of VEGF is up-regulated by EGFR phosphorylation (31). EGFR-TKI resistance is associated with increased expression of VEGF. A combination of VEGF inhibitor bevacizumab with EGFR-TKI can abrogate primary resistance and demonstrate substantial antitumor activity (32). Although our study did not investigate the association between anemia and VEGF expression, it might be one of mechanisms that can explain the poor prognosis in the anemia group.

This study has some limitations. First, it was a retrospective study. Nonetheless, our study was a multi-center study having a moderate sample size. Second, the proportion of poor PS was higher in the anemia group. Cancer-related anemia results from multiple causes such as malnutrition, deteriorated intestinal absorption and metabolism, chronic inflammation, aging, and advanced stage, which are factors for decreased erythropoiesis (33). In addition to anemia, aging and malnutrition might contribute to poor prognosis. However, after adjusting for age and poor PS, anemia was an independent prognostic factor in NSCLC with EGFR mutations treated with TKI.

Findings of this study showed that pre-treatment anemia is significantly associated with decreased OS in NSCLC patients with EGFR mutations treated with EGFR-TKI. Our data indicate that hemoglobin level routinely measured during cancer work up may represent a potentially important variable to predict prognosis in NSCLC patients harboring activating EGFR mutations treated with EGFR-TKI. Further large-scale prospective studies are required to validate our findings.

Conflicts of Interest: All authors have completed the ICMJE uniform disclosure form (available at http://dx.doi.org/10.21037/jtd-19-3932). The authors have no conflicts of interest to declare.

Ethical Statement: The authors are accountable for all aspects of the work in ensuring that questions related to the accuracy or integrity of any part of the work are appropriately investigated and resolved. This study was approved by institutional review boards (IRBs) of all participating centers. The requirement for informed consent was waived by IRBs because the study was based on retrospective chart reviews (IRB No HC19RCDI0027).