Lung cancer is a leading cause of cancer deaths worldwide with more than one million deaths each year (1). Patients often present with advanced disease at diagnosis and are ineligible for curative treatment (2). Despite advances in therapy, prognosis has been poor with 5-year survival rates of 16% for affected patients (3). Cigarette smoking remains a prominent risk factor for developing lung cancer and accounts for the majority of cancer deaths (4). Consequently, previous research has focused on lung cancer in cigarette smokers.

Never smokers with lung cancer treated at a tertiary hospital in Taiwan from April 2012 to May 2014 were evaluated for eligibility. Inclusion criteria were never smokers, defined by a lifetime use of less than 100 cigarettes, with a diagnosis of non-small cell lung cancer (NSCLC). Patients must have records of tumor genotype and familial cancer history for inclusion. Tumor samples were obtained by bronchoscopic or image guided biopsy and subsequently genotyped using direct polymerase chain reaction-based EGFR mutation tests. Exclusion criteria involved patients without records of familial cancer history or tumor genotype. The authors’ institution does not require review of retrospective studies involving de-identified medical records.

This study assessed 246 never smokers with lung cancer for eligibility. All patients had records of tumor genotype and familial cancer history, and therefore no exclusion of subjects occurred during analysis.

Demographic characteristics of cases and controls are shown in Table 1. Baseline characteristics including age, gender, disease stage, and histology showed no statistically significant difference between groups. The study population mainly involved never smoking women with a mean age of 60 years, and the predominant tumor histology was adenocarcinoma. The overall prevalence of EGFR mutations was 98 out of 246 patients (40%). 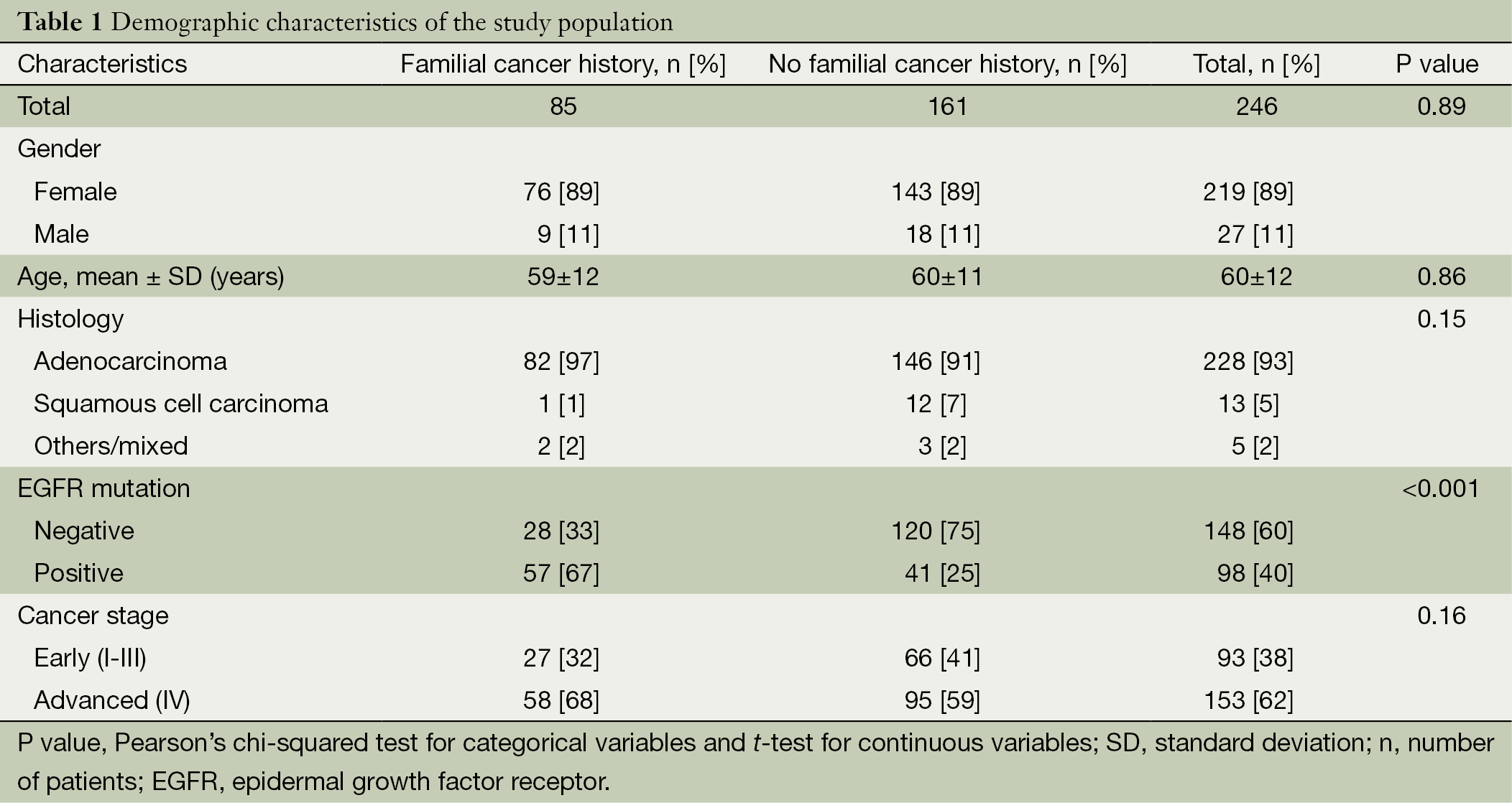 Epidemiological studies have consistently demonstrated that familial cancer history increases the risk of developing lung cancer (16,17), which suggests potentially heritable genetic factors in cancer development. Indeed, heritable susceptibility mutations have been identified on chromosome 6q and EGFR-T790M in familial aggregations of lung cancer patients (18,19). Asians in particular have increased susceptibility to EGFR mutations due to a combination of polymorphisms, mutations, and amplifications, and these mutations are well documented in the pathogenesis of lung cancer (20). Therefore, Asians with lung cancer may better reflect the relationship between familial cancer history and EGFR mutations.

Never smokers with lung cancer were frequently women in this study, which is compatible with previous literature (28). That Asian women were less likely to smoke partly explained their increased representation in never smokers with lung cancer, but hormonal factors and cooking practice also contributed to cancer development in this population (29-31). Specifically, estrogen receptors may interact with EGFR in the pathogenesis of cancer in women (32).

This study had several limitations. Firstly, environmental exposure was a potential confounding factor. However, since participants resided in the same municipality in central Taiwan, baseline environmental exposure such as air pollution should be comparable. Secondly, since never smoking lung cancer patients in Taiwan were more likely to be women, the study’s results may not be applicable to other populations. Thirdly, further sub-classification of familial cancer history according to degree of consanguinity would allow better understanding of its effects on the prevalence of EGFR mutations in never smoking lung cancer patients.

In conclusion, familial cancer history increased the prevalence of EGFR mutations in Taiwanese never smokers with lung cancer. Lung cancer patients with familial cancer history frequently harbored EGFR mutations and may respond favorably to TKI, and a family history of cancer can guide empirical TKI therapy in patients with life threatening disease. In essence, lung cancer in never smokers may be a distinct entity in which genetic factors play an important role.