Primary extra-pulmonary small cell cancer (SmCC) is a rare pathologic entity, and the esophagus is the most frequently reported site in the digestive tract (1). Alike to its pulmonary counterpart, SmCC of the esophagus is notoriously aggressive and characterized by early systemic dissemination and poor prognosis, regardless of the methods of treatment (2,3). Histologically, SmCC is characterized by a neuroendocrine-like architectural pattern, with peripheral palisading and rosette formation within the tumors. Similar to small cell lung cancer, SmCC of the esophagus is diagnosed based on the immunohistochemical staining for common neuroendocrine markers such as NSE, CD56, CgA, Syn (4). With the development of diagnostic capabilities such as immunohistochemical analysis, SmCC of esophagus could be readily diagnosed.

SmCC of the esophagus has been regarded as having an aggressive biological potential with poor prognosis. Due to its rarity, most previous studies have focused on case reports or series, the clinicopathological characteristics and the optimal clinical management has not yet been defined (5-8). Meanwhile, because the follow-up studies with long-term survival are limited, the factors affecting overall survival in those patients also remained unclear. Thus, the current retrospective study aimed to describe the clinicopathological characteristics and outcome of this rare disease base on the data of all patients with SmCC of the esophagus registered in the Surveillance, Epidemiology, and End Results (SEER) database from 1975 to 2016. We present the following article in accordance with the STROBE reporting checklist (available at http://dx.doi.org/10.21037/jtd-20-1428).

The SEER database is a population-based cancer registry that covers 28% of the population in the United States. The database ‘SEER 18 Regs Custom Data with additional treatment fields, Nov 2018 Sub (1975-2016)’ was searched for all patients diagnosed with SmCC of the esophagus using SEER*STAT 8.3.6 software. Patients with SmCC of esophagus were identified using “ICD-O 8041, 8041” between 1975 and 2016. Clinicopathological characteristics including age at diagnosis, race, sex, site of primary tumor, pathological grade, SEER historic stage classification, TNM stage, were extracted. Survival status as well as overall survival time were identified. Overall survival was defined as the interval from diagnosis to death or last follow-up. Treatment methods included surgery, chemotherapy, and radiation therapy, and different treatment strategy were combined to form seven treatment strategies, including: no treatment, surgery (S), chemotherapy (C), radiotherapy (R), surgery combined with chemotherapy (SC), surgery combined with radiotherapy (SR), chemoradiotherapy (CR), and surgery combined with chemoradiotherapy (SCR).

The clinicopathological characteristics were presented using counts and percentages. Kaplan-Meier method and log-rank tests were used to determine the influence of each variable on survival. Univariate and multivariate Cox regression survival analysis were also conducted to estimate the predictive factors and their weights, which was summarized using estimates and 95% confidence intervals for the hazard ratio. All statistical analysis was performed using SPSS software (version 23.0, IBM, USA).

A total of 515 patients diagnosed with SmCC of the esophagus were identified from SEER database between 1975 and 2016. The demographics and clinicopathological characteristics of these patients are present in Table 1. Two hundred and two patients were female and 313 were male. The average age at diagnosis was 68.6 years. The lesions of primary tumor in the most patients (76.0%) were located in middle/lower third of esophagus. A majority (97.5%) of those patients had poorly or undifferentiated pathological grade. Among those patients with TNM stage information, more than half of patients had lymph node metastases (112/197) or distant metastases (128/227) and 128/207 patients were diagnosed with TNM-IV stage. As for treatment regimen, most patients (462/515) did not undergo surgery, and 45.4% patients received radiotherapy, 62.9% received chemotherapy. Most patients received chemoradiotherapy (155/515) and chemotherapy alone (139/515).

The median overall survival (mOS) of all 515 patients SmCC of the esophagus was 7.0 months (95% CI, 6.0–9.0, Figure 1A). The OS rate by 6, 12, 24 months were 53.6%, 31.5%, 14.7%, respectively. Only 6.00% patients could survive exceed 5 years. Kaplan-Meier survival analysis revealed patients with distant stage had poorest prognosis, but no significant difference could be observed between patients with regional stage and localized stage (Figure 1B). Similarly, patients with advanced stage (IV) had much worse prognoses than those with early stage (I/II/III), but no difference among those patients without distant metastases (Figure 1C). The stratification analysis showed that older patients (>68 years) had worse prognosis than (≤68 years) (P<0.01). According AJCC-TNM stage classification, the prognoses did not become much worse with increasing tumor stage and lymph node invasion (P>0.01 for all, Figure 2A,B,C), but M category is associated with the overall survival in patients with SmCC of the esophagus (Figure 2D). Besides, no significant association of other variables and survival could be observed including gender (P=0.53), race (P=0.40), site of primary tumor (P=0.26), etc. 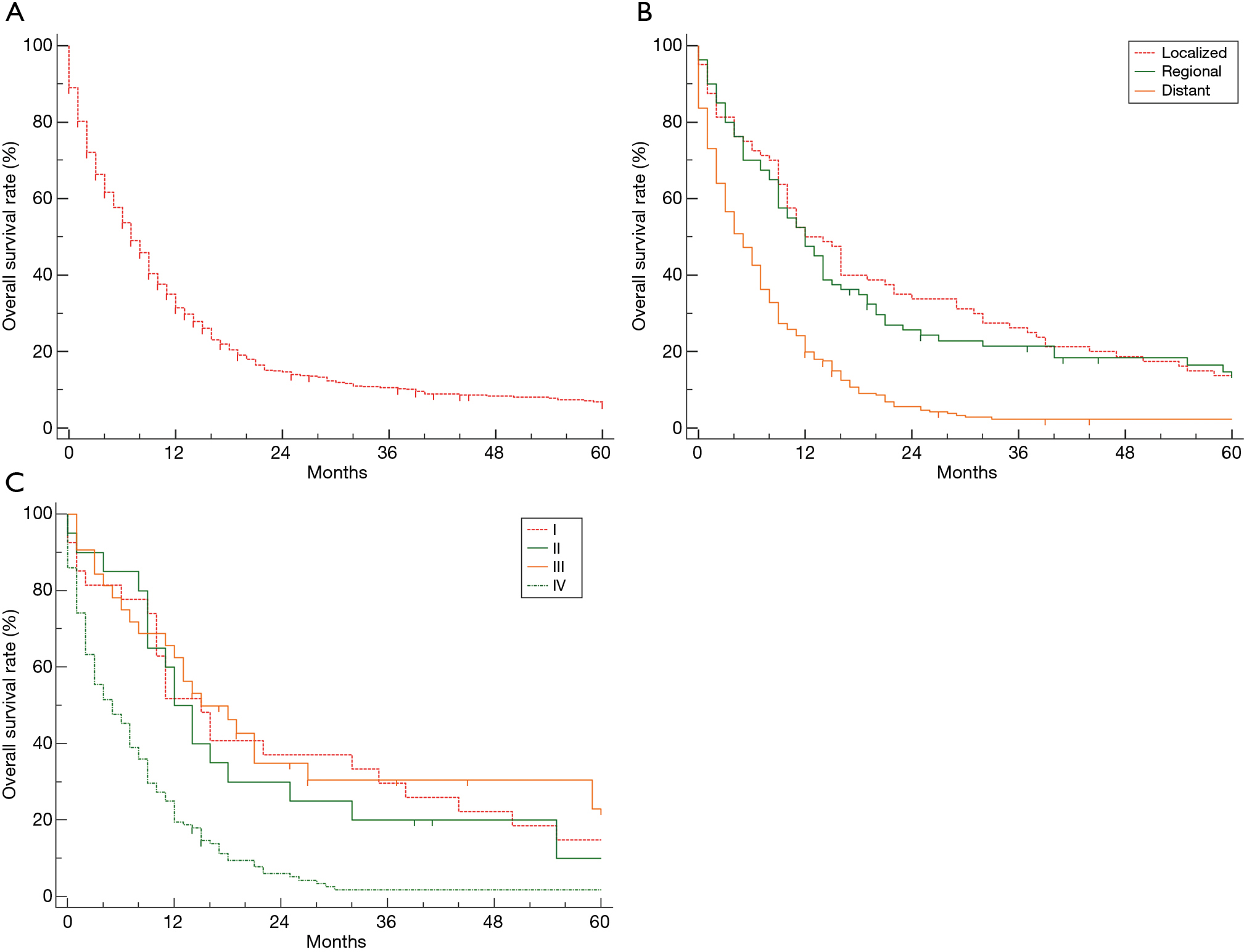 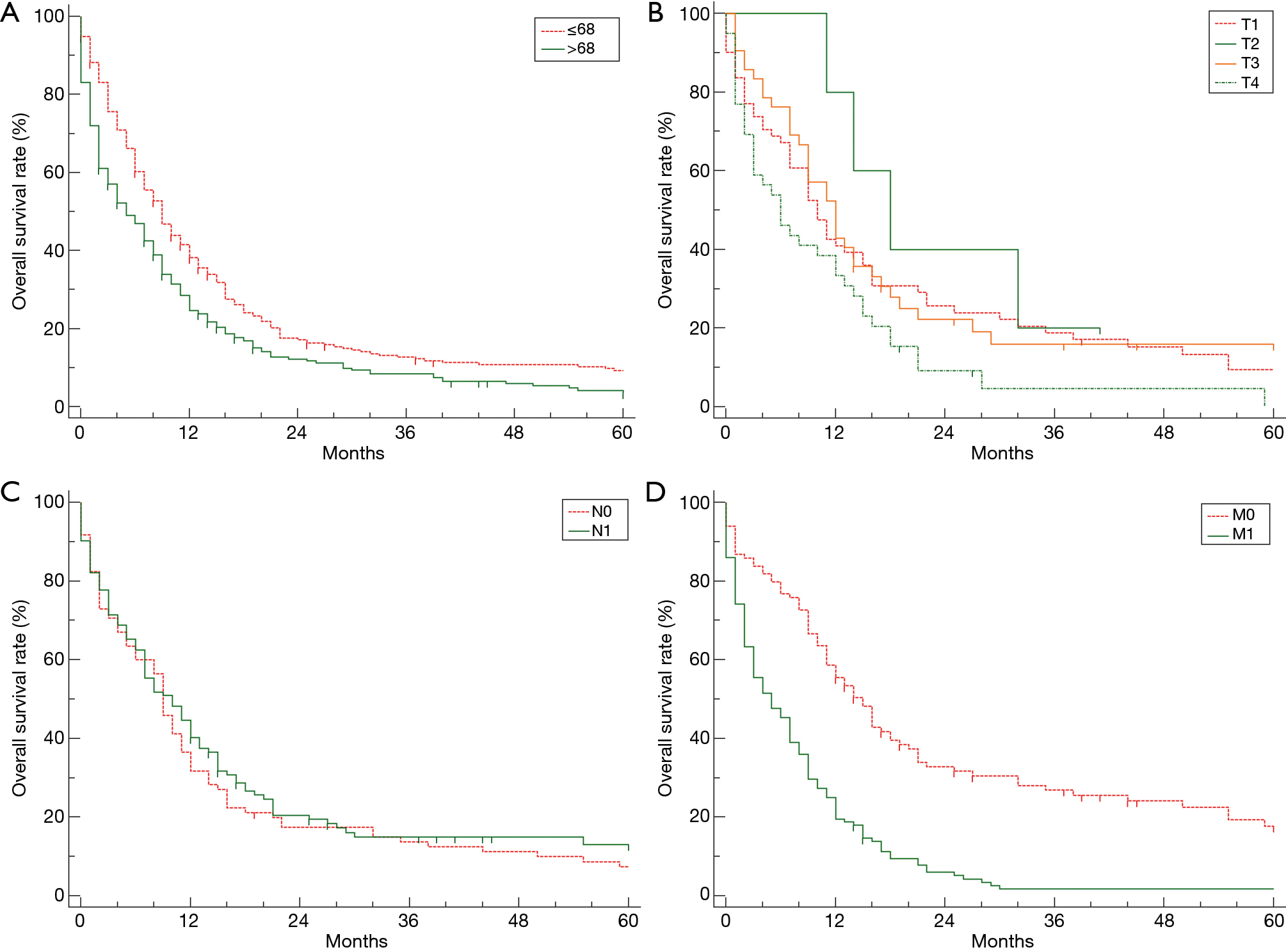 Figure 3 The effect of different treatment regimens on overall survival for patients with SmCC of the esophagus. SmCC, small cell cancer

Table 2 summarizes the univariate and multivariate survival analysis for SmCC of the esophagus patients with respect to age at diagnosis, sex, race, pathological grade, stage of disease, treatment strategy. Univariate Cox survival analysis showed that age, distant metastases as well as treatment strategy were significantly associated with prognosis (P<0.05 for all, Table 2). Subsequently, the multivariate Cox survival analysis demonstrated that older age (>68 years) and distant metastases were independent factors for poor prognosis (HR =1.33, 95% CI, 1.10–1.61, HR =2.28, 95% CI, 1.68–3.08; Table 2). The use of surgery, chemotherapy, radiotherapy were independent favorable prognostic factor for good prognosis. Surgery combined with chemoradiotherapy, surgery combined with chemotherapy as well as chemoradiotherapy could decrease risk of death for patients with SmCC of the esophagus by 77%, 81%, 77%, respectively. 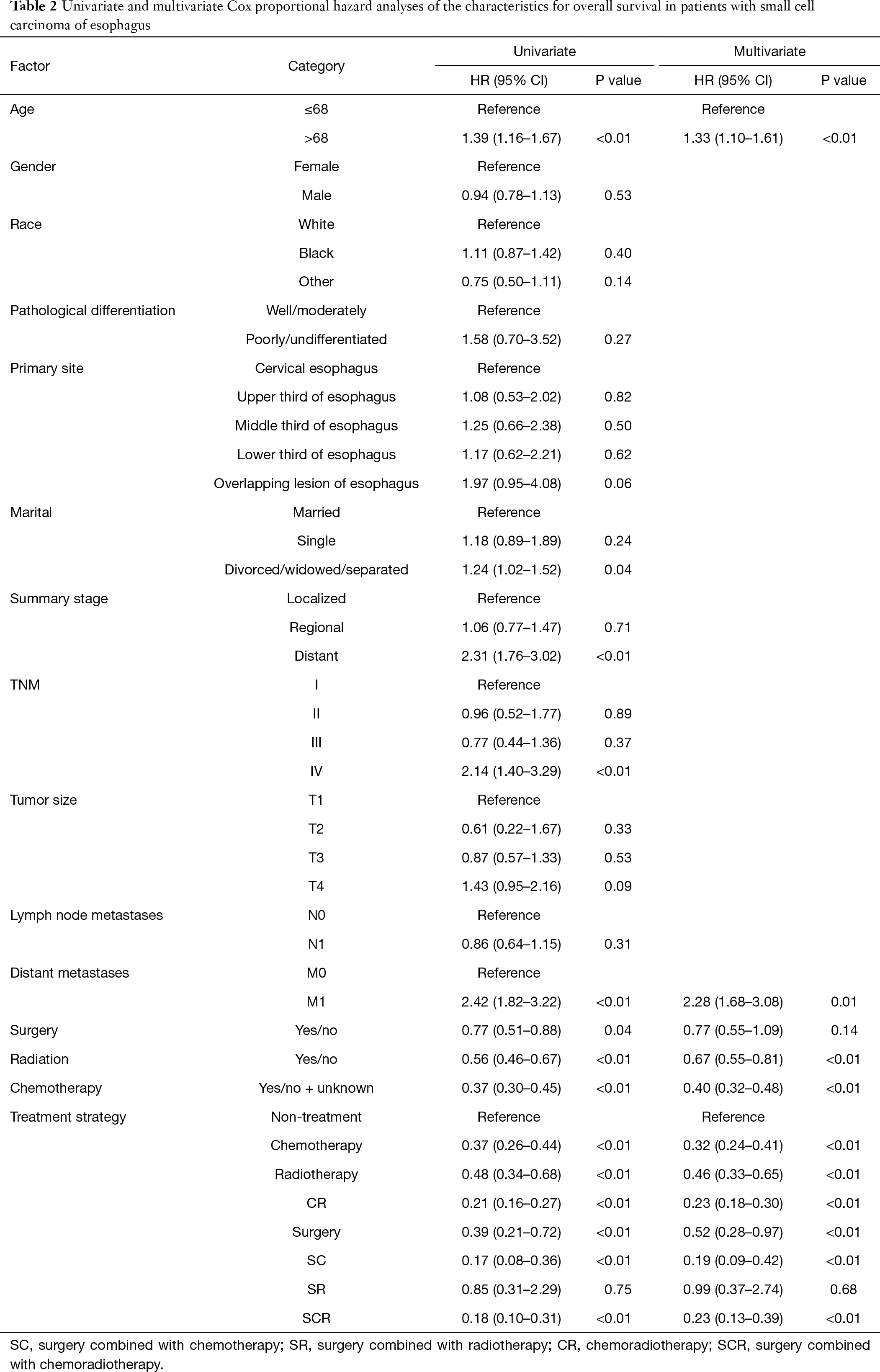 Primary small cell carcinoma (SmCC) of the esophagus is a rare malignancy, accounting for 0.05–4% of all esophageal cancers (9-11). Although no predisposing risk factor has been identified with SmCC of the esophagus, some association with smoking, alcohol consumption and Barrett’s disease have been reported previously. However, the clinicopathological characteristics and survival of this disease are not fully defined due to its rarity. In the present study, we conducted a retrospective study based on the data of 515 patients diagnosed with SmCC of the esophagus from SEER database to describe the clinicopathological characteristics and prognosis of this rare disease.

Previous studies reported that the lesion of patients with SmCC of the esophagus is more frequently located in the mid-lower esophagus and upper esophageal localization has been seen in approximately 5% of cases (8,12,13). In consistent with this data, our study showed that the lesions of 348/421 cases were located in mid-lower esophagus. The affected patients were usually in the sixth decade of life, with an age range of 40–70 years, with male predominance (5). Similar to those reported data, out study also found a predominance of males (1.55:1) with an average age of 68.6 years, which is also used as the cut-off value in terms of age for older patients and younger patients. The most common symptoms are dysphagia, anorexia, weight loss, reflux and chest pain (14,15). Besides, paraneoplastic syndrome with ectopic secretion of hormones in those patients have been reported, although this is a rare finding (1). In 2013, Kukar conducted a retrospective study with 64,799 esophageal cancer patients (387 patients with SmCC of the esophagus) from SEER database between 1973 and 2009 to compare the clinical characteristic between SmCC and other esophageal cancer (16). Compared with non-SmCC esophageal cancer, patients with SmCC of the esophagus were similar in age and race but had a higher proportion of women, higher stage and less likely to undergo surgical resection (16).

SmCC often have an aggressive behavior associated with a higher metastatic potential whatever primary site (2,3). For example, almost 56.6% of patients diagnosed with small cell lung cancer were staged with extensive-stage disease at initial diagnosis (2). Similarly, SmCC of the esophagus also had high rate of lymph node involvement and a high percentage of cases are diagnosed with distant metastasis (31–90%) (1). In the present cohort, approximately 97.5% of cases had poor differentiation or undifferentiation. More than half of cases accompanied with lymph node (112/197) or distant metastases (128/227) at diagnosis. Therefore, most patients present locally or regionally advanced disease at diagnosis, whatever SEER historic stage (distant stage: 259/420) or AJCC-TNM stage (IV stage: 128/207). The prognosis of this rare malignancy is poor, with reported median survival ranging from 7 to 19 months (14,17). The mOS of patients in the present cohort is only 7.0 months, only 31.5% patients could survive exceed 2 years. In Kukar’ s study, the data showed that patients with SmCC of the esophagus had a worse survival than other esophageal cancer (16). In consistent with Kukar’s study, our data also revealed that older age, distant metastases were independent prognostic factors.

Obviously, there are several limitations that required clarification like other studies based on SEER database. First, several variable information was lacking, such as pathological differentiation, TNM stage, chemotherapy, etc. For example, there were 308 patients without TNM stage information, 318 patients had no recorded lymph node metastases, and 288 patients had no information on distant metastases. Although SEER summary stage could be an alternative classification for AJCC-TNM stage, there are still 95 patients with unknown SEER summary stage. Inadequate data of those variable limited the reliability and accuracy of characteristics description and prognostic analysis. Second, the lack of other variables such as performance status, gene alterations, type and duration of chemotherapy, chemotherapy sequence surgery, also limited the accuracy of prognosis analysis. Lastly, responses to treatment and recurrence rates could not be determined using these data from the SEER database.

In conclusion, we present the largest case series on SmCC of the esophagus based on the data from SEER database. The results showed that older age, distant metastases were independent prognostic factors for poor survival. Chemotherapy could provide significant clinical benefit for those patients, especially chemoradiotherapy and surgery combined with chemotherapy. However, conclusion drawn from a study based on SEER database must be tempered by the fact that several variables was lack. Therefore, these conclusions required to be validated in the future prospective study.

Reporting Checklist: The authors have completed the STROBE reporting checklist. Available at http://dx.doi.org/10.21037/jtd-20-1428

Conflicts of Interest: All authors have completed the ICMJE uniform disclosure form (available at http://dx.doi.org/10.21037/jtd-20-1428). The authors have no conflicts of interest to declare.