Lung volume reduction surgery (LVRS) was initially introduced in 1957 by Brantigan and Mueller, who described it as a reduction pneumoplasty with resection of the most emphysematous parts of the lung (1), but due to complication risks the method never became popular. It was reintroduced in the 1990ies, and a large study published 2003 proved that it could considerably improve lung function and quality of life (2). However, thoracic surgery in patients with very low lung function still carries a risk of morbidity and even mortality. Intrabronchial methods have therefore been developed. One such method is endobronchial lung volume reduction (EBVR), where one-way valves are introduced into all segmental bronchi of the most diseased lobe of the lung, with the goal of making it atelectatic. Earlier studies have shown that in patients with high heterogeneity and complete fissures the results are good, better than any other method except transplantation (3-8). The problem has been to select the right patients for the procedure. Furthermore, the long-term effects have not been reported in most studies.

At the Lung Department in Karolinska Hospital, Stockholm, Sweden, we started our own small series in 2008, treating only very selected patients fulfilling certain criteria. We now have long-time follow-up of most of these patients. Some of the patients have been partially described earlier (6,9).

We present the following article in accordance with the STROBE reporting checklist (available at http://dx.doi.org/10.21037/jtd-19-4082).

Patients with severe emphysema causing dyspnoea which considerably affected the quality of life were evaluated for treatment. In addition, these criteria should also be fulfilled: the patient must have stopped smoking at least four months earlier, the residual volume (RV) should be at least 120%, there should be absence of serious other diseases such as malignancy or severe heart disease, bronchiectasis, frequent airway infections (3 or more per year), and prior lung surgery (other than lung transplantation).

To further select the patients a standard CT scan of the thorax was used. The lobe areas on the mid-sagittal view were calculated for each side with the normal program of the CT scanner. This requires clearly visible interlobar fissures, which is also an indication of absence of collateral ventilation. We decided on arbitrary normal values of different lobes in this projection: left lower lobe (LLL) =50%, LUL =50%, RUL =40%, ML =15%, and RLL =45% (Figure 1). To be accepted for the procedure, the calculated value for the affected lobe should be at least 125% of the arbitrary value (for the middle lobe, at least 200%). 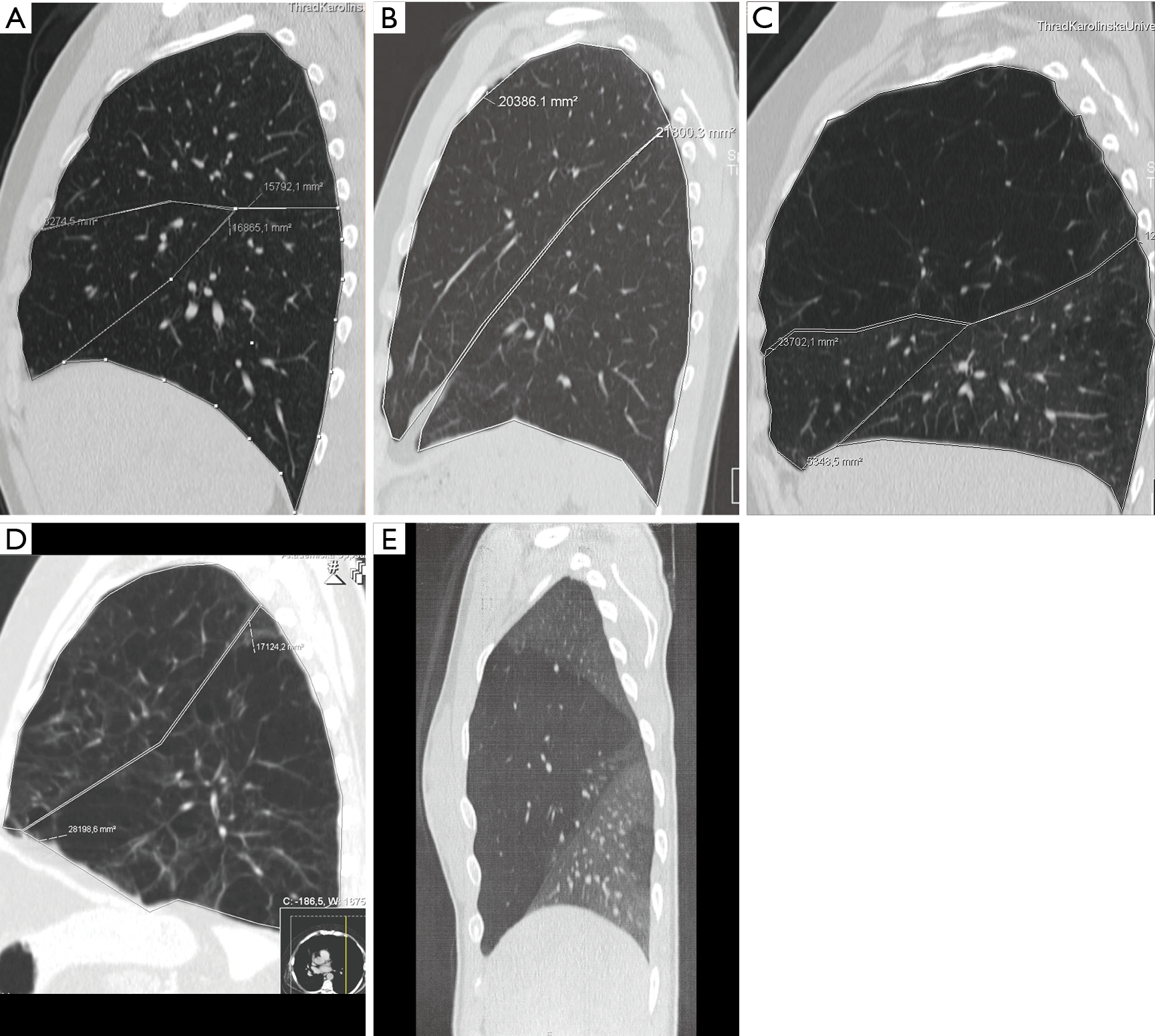 Cases were classified as failures if the improvement of FEV1sec was 15% or less (primary failures), or if the stents were coughed up or had to be removed for some reason (secondary failures).

All patients filled in confirmed assent. The study was approved by the Ethical Committee of the Karolinska Institute (2011-431-31/1). The study was conducted in accordance with the Declaration of Helsinki. The patients were followed until death or failure; however, a few were missed. All patients and also the refused ones were followed by the Swedish population statistics, where if the person has died the date of death can be easily found.

From 2008 to 2012, 62 patients fulfilled the standard criteria. Of those, 27 did not fulfil the radiological criteria, thus leaving 35 patients who went through the procedure, with in the mean 3 valves (range, 1–4) introduced. Of these, 5 (14%) were primary failures, and 9 (28%) were secondary failures. All but two secondary failures happened within the first 6 months after the procedure; five coughed up one or more stents, and in the other 5, repeated infections necessitated removal of the stents (Table 1). After removal or coughing up of stents, the FEV1sec was very similar to the starting value, with one exception: a man who after repeated infections developed scar tissue in the affected lobe so that it remained atelectatic even after removal of the stents, thus retaining his very improved lung function. Two patients in the successful group had had earlier one-sided lung transplants.

As for other complications, there were no pneumothoraces and only a handful had slight hemoptysis the day after the procedure.

The groups were fairly compatible in their basic values (Table 1).

In the 15 AAT patients, the lower lobes were excluded in all cases but two, where the middle lobe was the target. In the other patients, 11 were in the upper lobes, 3 in the lower lobes, and one in the middle. The improvement of FEV1sec was in the mean 59% (range, 19–206) in the successful patients, and in those with secondary failure it was 55% (range, 42–62). Three patients improved more than 100%, of whom two had lack of alfa-1-trypsin. The lung function of 12 patients who survived 5 years can be seen in Figure 2. In one patient, stents were introduced again on the other side 4 years after placement in the RUL, hence the second improvement (9). 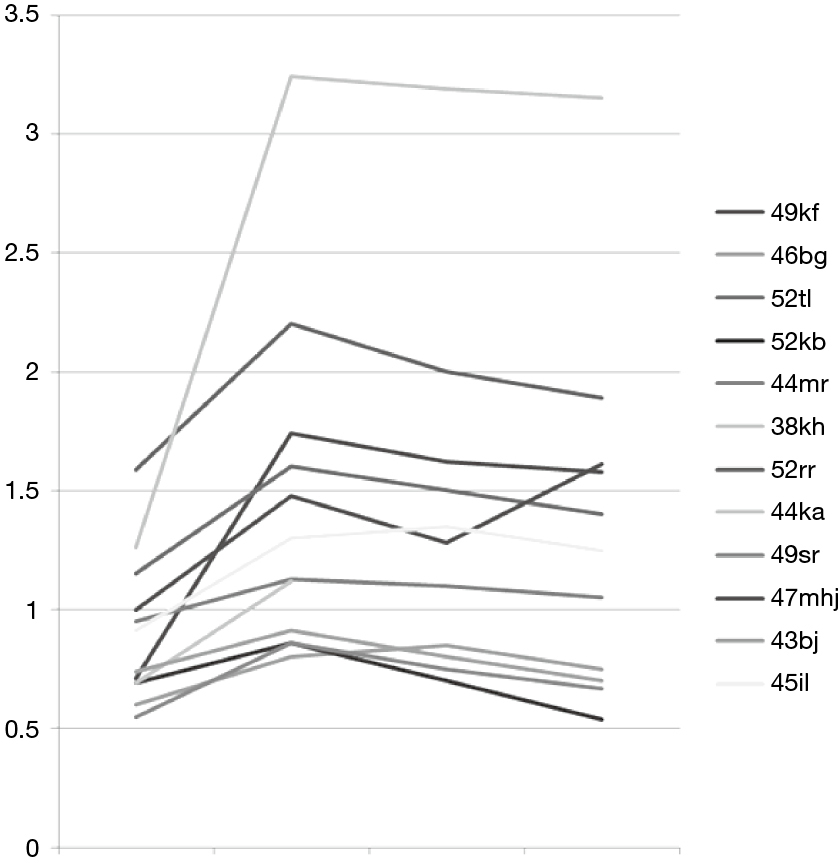 Of the heavily selected cases in this study, two thirds had an important improvement of their lung function. The emphysematous process continues even after installation of stents, but from a higher level, and most patients were better off for the observed 5 years, and some much more so, depending on the level of improvement. The survival curves also indicate that the stents can prolong life. The 50% survival at 5 years of the non-treated and failure patients illustrates the very poor prognosis of patients with a very low FEV1sec (10,11).

Our radiological approach is based on the physiology of emphysema. In the normal chest, there is a negative pleural pressure due to two balancing forces: the chest wall straining outwards; and the elasticity of the lung striving inwards. In emphysema there is a hyperinflation because of lack of elastic recoil (1,12,13). Consequently, an increased lobe size relative to other lobes indicates a greater loss of elasticity in that lobe than in the other(s), which is a prerequisite for the procedure to work. One caveat with our method: with a marked difference between sides, the mediastinum can be drawn over to the healthier side.

The larger the size difference, the better are the chances of good results. The best results are also seen in cases where there is a complete atelectasis of the target lobe, but most common is a partial atelectasis which can also be functionally very helpful. As seen from Figure 2, it seems that the best results are achieved in patients with a FEV1sec of one litre or more. However, even in those with a lower FEV1sec there is an improvement which, even if not very impressive figure wise, can make a large difference in quality of life. As seen, one patient went from FEV1sec of 0.6 litres to 1.7, which is going from a very restricted life to one almost normal. Though the patients are few, the findings indicate that one should not wait too long: in suitable patients the best is probably to act when the patient starts complaining of bothersome dyspnoea.

At least some of our primary failures could probably have been avoided had we been able to use the Chartis system, which can verify lack of collateral ventilation (15), but this was not yet available when the study started. The secondary failures are more difficult to avoid.

A fairly high percentage of our patients were AAT-patients, which probably mirrors the facts that these patients usually have intact fissures and very often a heterogenous emphysema which mainly affects the lower lobes.

In conclusion, with careful selection of patients remarkably good results in lung function can be achieved and these improvements will last for years. In addition, the study indicates a better survival with improvement of FEV1sec.

Reporting Checklist: The authors have completed the STROBE reporting checklist. Available at http://dx.doi.org/10.21037/jtd-19-4082

Conflicts of Interest: Both authors have completed the ICMJE uniform disclosure form (available at http://dx.doi.org/10.21037/jtd-19-4082). The authors have no conflicts of interest to declare.

Ethical Statement: The authors are accountable for all aspects of the work in ensuring that questions related to the accuracy or integrity of any part of the work are appropriately investigated and resolved. All patients filled in confirmed assent. The study was approved by the Ethical Committee of the Karolinska Institute (2011-431-31/1). The study was conducted in accordance with the Declaration of Helsinki (as revised in 2013).