Association between reproductive lifespan and lung function among postmenopausal women

With the increase in life expectancy, women spend a greater proportion of their lifetime in the postmenopausal state (1,2). Menopause is a physiological phase characterized by a decrease in hormone production due to the depletion of ovarian function and cessation of menstruation (3). With menopause, women experience various health problems such as hot flashes, night sweats, vaginal dryness, headache, insomnia, and osteoporosis. Postmenopausal women are often considered as a risk population for chronic diseases such as cardiovascular disease and metabolic diseases including diabetes mellitus and obesity (4-6). Likewise, menopause was associated with impaired lung function along with respiratory symptoms (7-12). In addition, menopause is associated with accelerated lung function decline, especially for forced vital capacity (FVC) beyond the expected age change. The population-based longitudinal European Community Respiratory Health Survey (ECRHS) showed that FVC declined more rapidly among transitional (−10.2 mL/year) and post-menopausal women (−12.5 mL/year) compared with women menstruating regularly (8).

KNHANES from 2010 to 2015 was used in this study. KNHANES is a cross-sectional survey of a nationally representative noninstitutionalized sample using a stratified, multistage, clustered probability sampling design (18).

The 2010–2015 KNHANES study protocols were approved by the Institutional Review Boards of the Korea Centers for Disease Control and Prevention. Written informed consent was obtained from all participants.

Spirometry was part of the health examination and it was performed according to the recommendations of the American Thoracic Society and European Respiratory Society (19). Absolute values of forced expiratory volume in 1 second (FEV1) and FVC were obtained, and the percentage of predicted values (% predicted) for FEV1 and FVC were calculated using the reference equation obtained on analysis of the representative Korean sample (20). Spirometry-defined lung function was classified as normal (FEV1/FVC ≥0.7 and FVC ≥80% predicted), restrictive ventilatory disorder (FEV1/FVC ≥0.7 and FVC <80% predicted), and obstructive ventilatory disorder (FEV1/FVC <0.7) (21). Restrictive or obstructive ventilatory disorder was considered as having abnormal lung function. Because there could be age related over-diagnosis of obstructive lung disease with fixed ratio, we also conducted a sensitivity analysis using the lower limits of the normal range (LLN) criterion to define abnormal lung function. LLN criterion -defined lung function was classified as normal (FEV1/FVC ≥ LLN and FVC ≥ LLN), restrictive ventilatory disorder (FEV1/FVC ≥ LLN and FVC < LLN), and obstructive ventilatory disorder (FEV1/FVC < LLN) using the reference equations from the KNHANES II (22). Height, weight, and waist circumference were measured by trained nurses. Body mass index (BMI) was calculated by dividing the weight (kg) by the height squared (m) and classified as underweight (<18 kg/m2), normal (18–22.9 kg/m2), overweight (23–24.9 kg/m2), and obese (≥25 kg/m2), according to the World Health Organization guidelines for Asian populations (23). Number of parity was classified into two groups (<4 and ≥4). Comorbid condition included arterial hypertension, dyslipidemia, diabetes mellitus, which were based on laboratory data and self-reports of physician diagnosis from questionnaire conducted by the KNHANES (24,25). All clinical analyses were performed by the Neodin Medical Institute, a laboratory certified by the Korea Ministry of Health and Welfare.

The KNHANES sampling weights accounting for the complex survey design, survey non-response and post-stratification were used (18). Descriptive statistics were used to summarize the characteristics of participants by the presence of abnormal lung function. Continuous and categorical variables were compared among the two categories of group using linear regression and χ2 tests, respectively. Nominal variables were presented as a number and percentage, and continuous variables were presented as a mean ± standard error of the mean.

In addition to categorical analysis, RL was modeled as continuous variables using restricted cubic splines with knots at the 5th, 35th, 65th, and 95th percentiles of the sample distribution to provide a flexible estimate of the dose-response relationship between RL and predictive FVC and FEV1. Stratified analyses were also performed to evaluate the association of RL and abnormal lung function in pre-specified subgroups defined by obesity (no and yes) and smoking status (never and ever).

Postmenopausal women aged 40 to 64 years old who underwent spirometry (N=4,466) were included. Women who experienced premature menopause (<40 years; N=191), artificial menopause (N=1,000), or history of lung cancer (N=11) were excluded. In addition, 17 participants who had missing information regarding age at menarche or menopause onset were excluded. The final sample size was 3,410 (Figure 1). 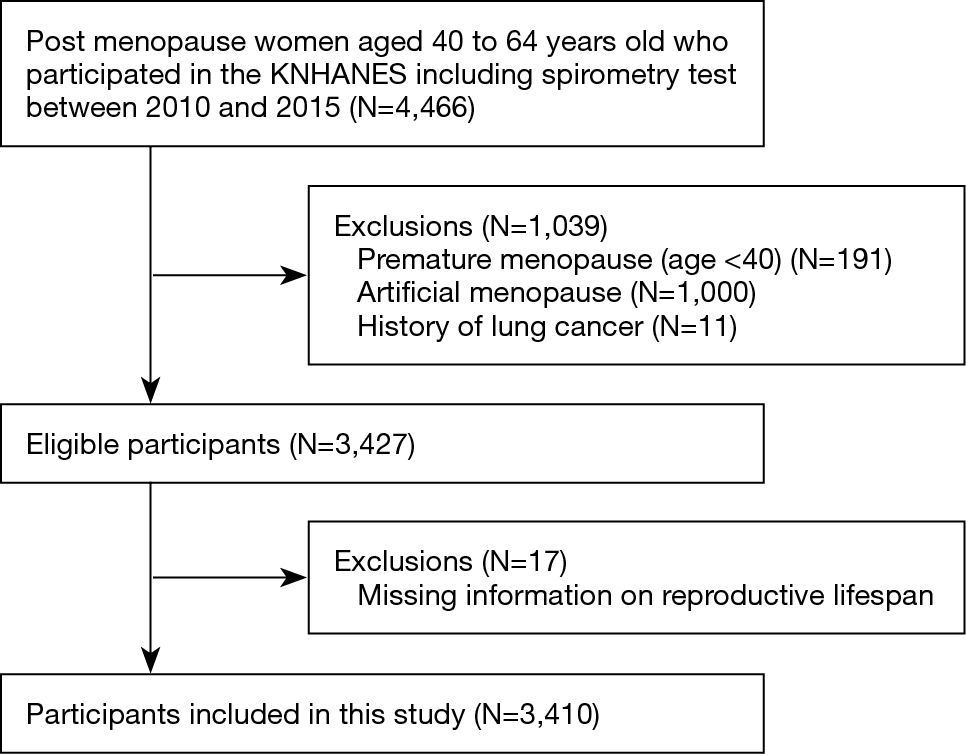 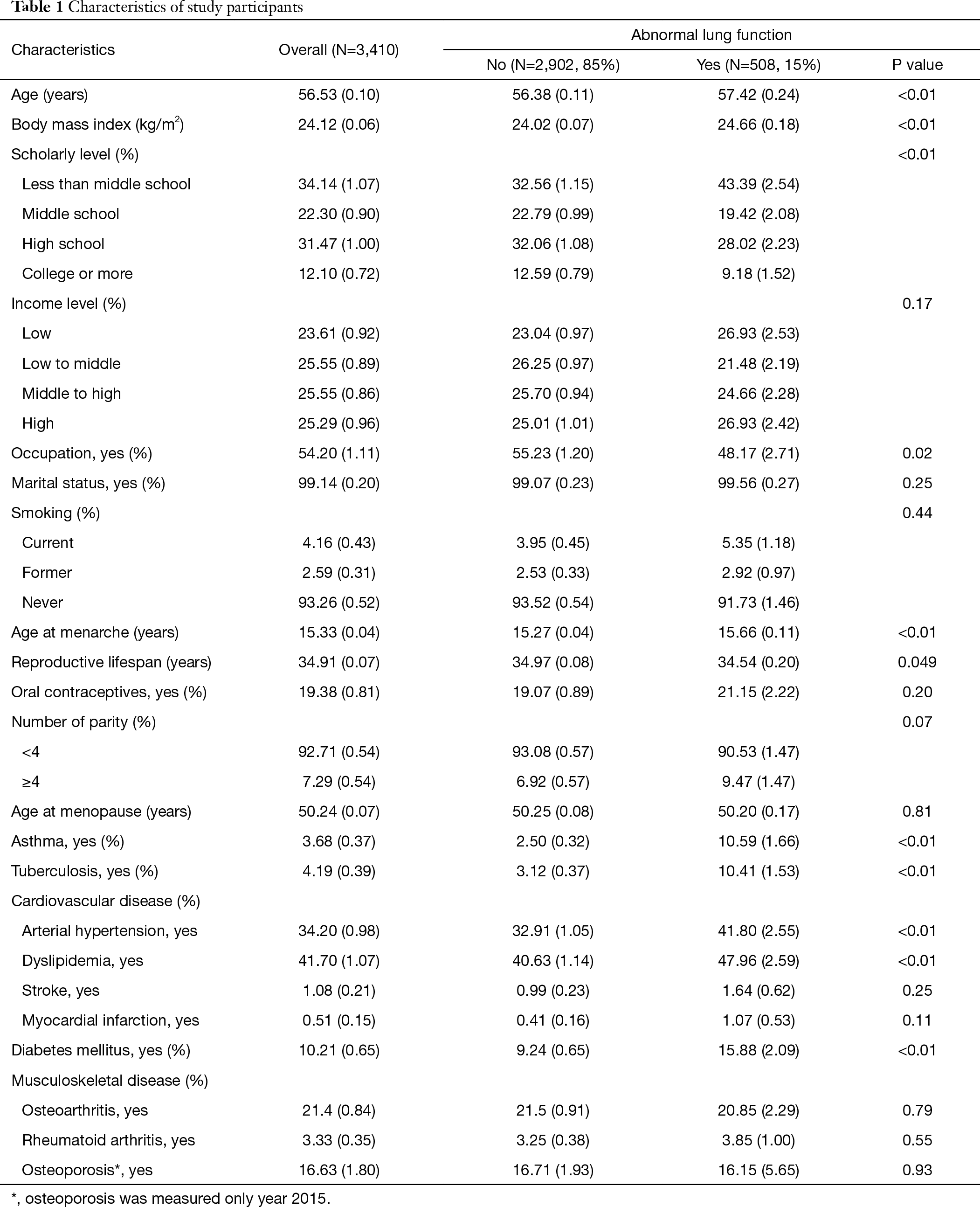 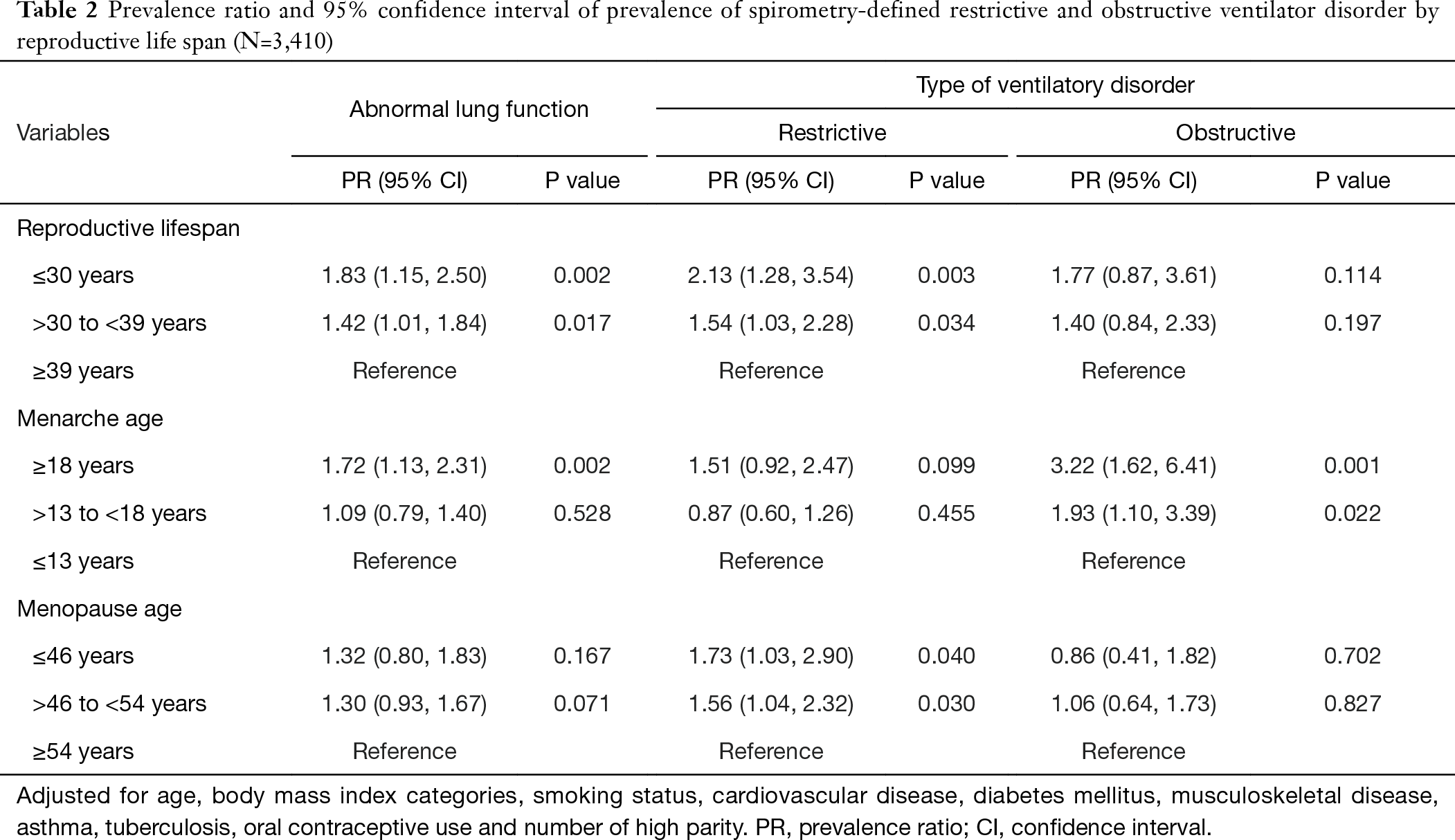 Figure 2 Coefficient (95% CI) for (A) forced vital capacity (FVC) % predicted (% pred) and (B) forced expiratory volume in one second (FEV1; % pred) by reproductive lifespan (years). The curves represent the coefficient (solid line) and their 95% confidence intervals (dashed lines) for lung function based on restricted cubic splines for reproductive lifespan (years). With knots at the 5th, 35th, 65th, and 95th percentiles of their sample distributions. The reference value (diamond dot) was set at the 90th percentile. 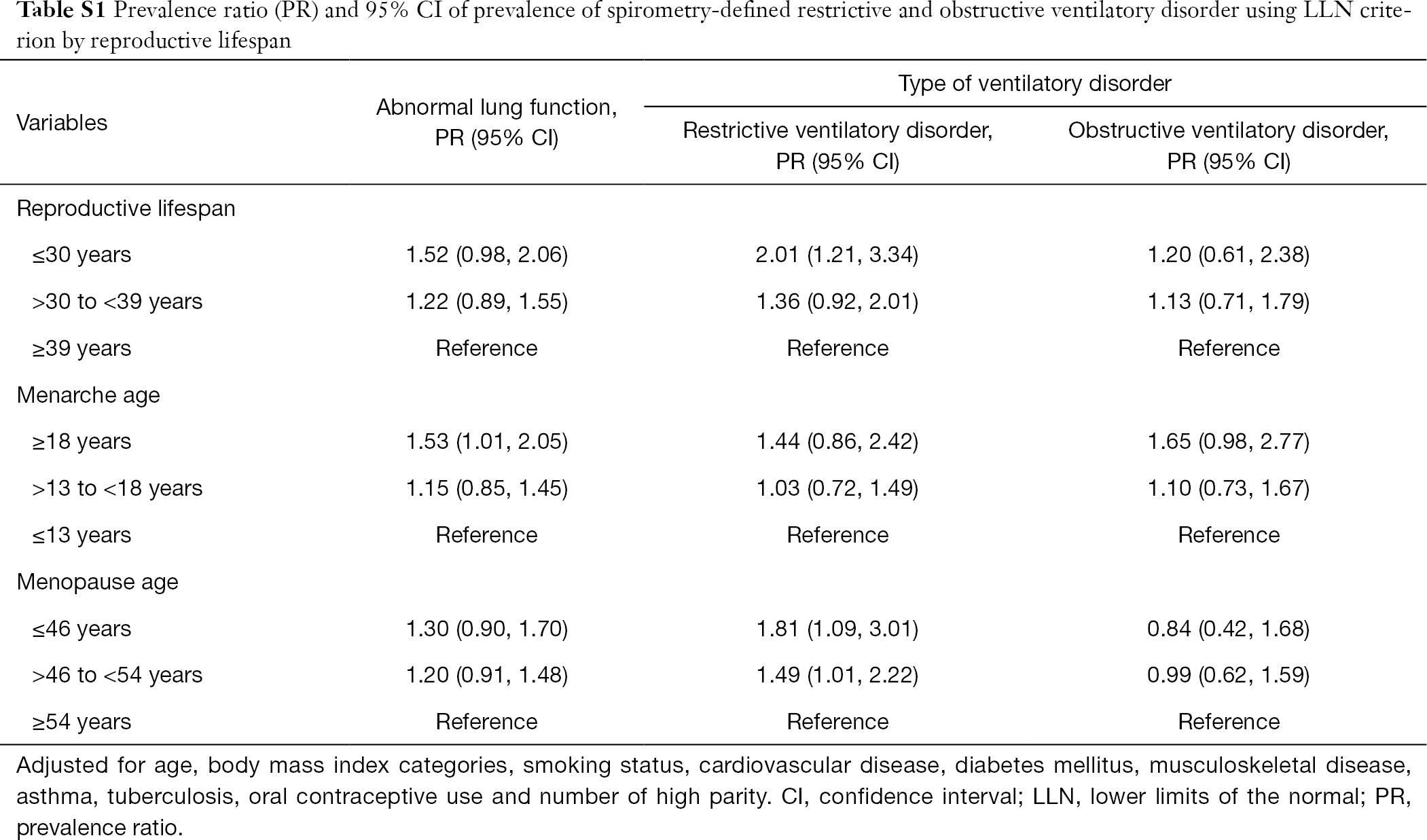 The positive association between shorter RL and higher prevalence of abnormal lung function was stronger in women without obesity and non-smoking status, but the interactions were not statistically significant (all P values for interactions >0.05; Table 3). 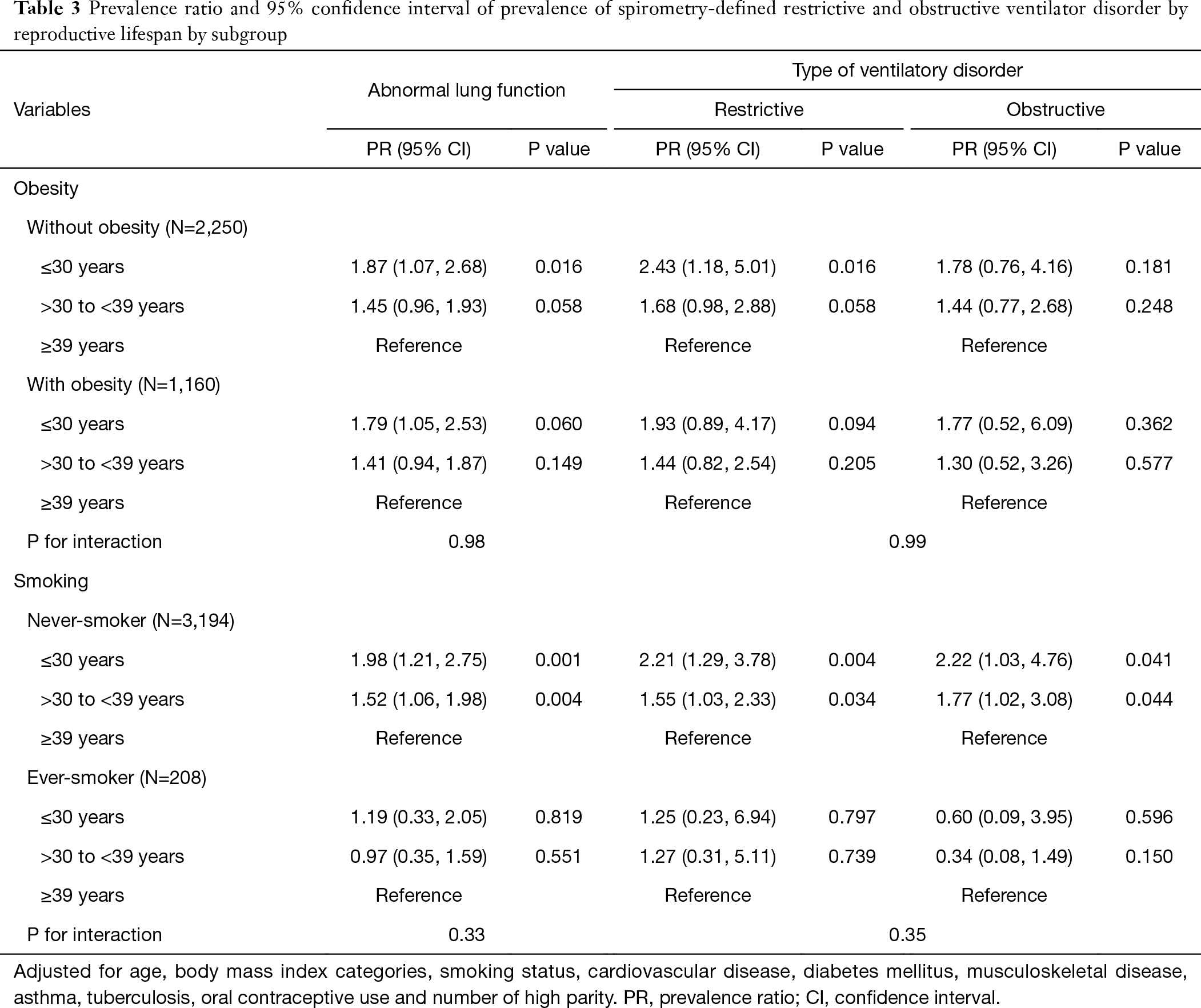 In this study, shorter RL was associated with restrictive ventilatory disorder. While there have been many studies evaluating the association either between age of menopause or menarche and lung function, there was no study regarding the association between RL and lung function. Women who had a RL ≤30 years had about 1.8 times higher risk of having restrictive ventilatory disorder compared to women who had ≥39 years of RL. Women with ≤30 years of RL would have reduced exposure to estradiol compared to women with ≥39 years of RL. The restrictive ventilatory disorder may be due to similar mechanisms of abnormal lung function in postmenopausal women. Estradiol has been demonstrated to have an anti-inflammatory effect (13). In line, the hypoestrogenism associated with changes in the hypothalamo-pituitary-gonadal axis in menopause is associated with increased systemic inflammation and lung inflammation, which may contribute to deteriorating lung function (13,26). Further, the decrease in estradiol increases the risk of osteoporosis, which causes compression of the vertebra. This interferes with the lung expansion, resulting in a decrease in lung function, particularly FVC (27). Moreover, postmenopausal women become more insulin resistant (5,28), which is associated with lower lung function and increased respiratory symptoms (29-31). Women with shorter RLs may be more likely to be insulin resistant, resulting in lower lung function. However, the mechanisms underlying associations between RL and lung function impairment need to be further investigated.

While the interactions were not statistically significant, we found that non-obese and non-smoking women with shorter RLs were at a bit higher risk of restrictive ventilator disorder. Hormonal status might not be a very strong predictor of abnormal lung function among postmenopausal women when other important comorbidities such as obesity and smoking are also present. In fact, previous studies showed that a restrictive ventilator disorder, represented by a low FVC, was not only associated with cardiovascular diseases (32), but also with a multitude of clinical conditions, such as aging (33), smoking (34), obesity, metabolic syndrome, and diabetes mellitus (35,36). In line with low FVC under systemic influence, the relationship of RL with cardiovascular diseases has been previously suggested. Risk of coronary heart disease and cardiovascular mortality were lower among women with a higher age at menopause (37-39) and one study observed a reduction in cardiovascular mortality among women with longer exposure to endogenous estrogen (39). Another study showed that shorter RL was associated with an increased risk of noncardioembolic stroke (40). Further studies are necessary to elucidate the relationships among RL, lung function, and cardiovascular disease risk. Yet, considering the burden of pulmonary and cardiovascular diseases in middle- and older-aged women, health professionals need to consider screening and monitoring lung and cardiac function in postmenopausal women irrespective of obesity and smoking status.

In this study, late onset of menarche was associated with abnormal lung function, particularly an obstructive ventilatory disorder. The subjects with late age of menarche (≥18 years) were significantly older than other groups. Considering that half of them were born during the Korean war, there may be birth cohort effects, such as malnutrition during the war, on abnormal lung growth and development (41). This submaximal lung growth and development could be one possible explanation for the relationship between late onset of menarche and obstructive ventilatory disorder (42). Nevertheless, results in this study are different from those of previous studies. Early onset of menarche has been considered one of the clinical factors associated with increased risk of asthma or abnormal lung function, particularly low FVC (15-17,43-45). The multinational ECRHS also showed that lower lung function measured by FEV1 and FVC was more common in women with early menarche, and abnormal lung health mainly appeared to be related to menarche before the age of 11 years (15). However, in this study, there were only a few subjects who had menarche before the age of 11 years, and it was not possible to evaluate the association.

We also found that restrictive ventilatory disorder was associated with the early onset of menopause. This is consistent with the results from a previous large multicenter population-based study which used the UK Biobank data. The study reported that women with early menopause had lower FVC and higher risk of spirometric restriction among postmenopausal women, but early onset of menopause was not associated with airflow obstruction (7). Given that change of FVC was more pronounced than the change of FEV1 among transitional and postmenopausal women in the previous study (8), restrictive ventilatory disorder determined by FVC may be more associated with early onset of menopause than obstructive ventilatory disorder determined by FEV1.

There were several limitations in this study. First, this study was a cross-section design, which limits the assessment of causal inference between abnormal lung function and reproductive life span. As reverse causality for the impact of abnormal lung function on early onset of menarche or menopause could be possible, further studies with longitudinal follow-up analyses need to be conducted. Secondly, data on age of menarche and menopause onset were based on questionnaires, so there was a possibility of measurement errors. However, as age of menarche and menopause onset mark important points to women, this measurement error would be small. Thirdly, the RL acquired from questionnaires may also have measurement errors despite adjustment for the number of high parity and the use of oral contraceptive or hormone replacement therapy. Fourth, measurement of total lung capacity (TLC) to determine accurate restrictive ventilatory disorder was not available in the KNHANES data and some women with obstructive ventilatory disorder might be classified as having restrictive ventilatory disorder. Further studies with comprehensive lung function tests including TLC are needed to validate our study findings. In addition, information for hazardous substances at the workplace, which might affect lung function, was lacking. However, there were more participants with abnormal lung function among women who did not have a job at the time of survey. Finally, this study used a nationwide representative sample of Koreans, which might not be generalizable to subjects in different countries or of other ethnicities. Despite these limitations, the national representative nature of the patient sample considered in conjunction with the strict quality control procedures of the Korea NHANES is a major strength of this study, adding plausibility to findings.

In conclusion, we demonstrated that shorter RL in postmenopausal women is associated with a decrease in lung function, particularly with a restrictive ventilatory disorder. Clinicians should pay attention to respiratory impairment as well in postmenopausal women, especially with short female hormonal exposure.

Conflicts of Interest: All authors have completed the ICMJE uniform disclosure form (available at http://dx.doi.org/10.21037/jtd-19-3726). HYP serves as an unpaid editorial board member of The Journal of Thoracic Disease from Feb, 2019 to Jan, 2021. The other authors have no conflicts of interest to declare.