We retrospectively reviewed 91 patients who underwent LUL at our institution, between January 2014 and March 2018. Two patients presenting with an intra-cardium division of the LSPV and three patients with a common trunk of the left PV were excluded. The study was conducted in accordance with the Declaration of Helsinki (as revised in 2013). The approval from the Institutional Review Board of this study was waived because of the retrospective character of the study.

Two thoracic surgeons analyzed the computed tomography (CT) and patients were classified into two groups, based on the anatomical relationship between the LSPV and LAA: an antero-superior pattern and a postero-inferior pattern. The clinicopathological data were obtained from the medical charts. The pathological staging was based on the 7th edition of the Union Internationale Contra le Cancer (UICC) staging system on tumor-node-metastasis (TNM) classification.

Video-assisted thoracoscopic surgery (VATS) was performed for all cases except those with large tumor size, chest wall invasion, bronchial invasion, or pulmonary vessel invasion. The PV during lobectomy was generally divided in the extra-pericardial space, using linear staplers (GIA Stapling System, Ethicon, Dublin, Ireland and Endo GIA, Covidien, Dublin, Ireland), except in a few cases where an intra-pericardial procedure was needed. The dissection line of the LSPV was as proximal to the atrium as possible.

Anatomical location of the LSPV 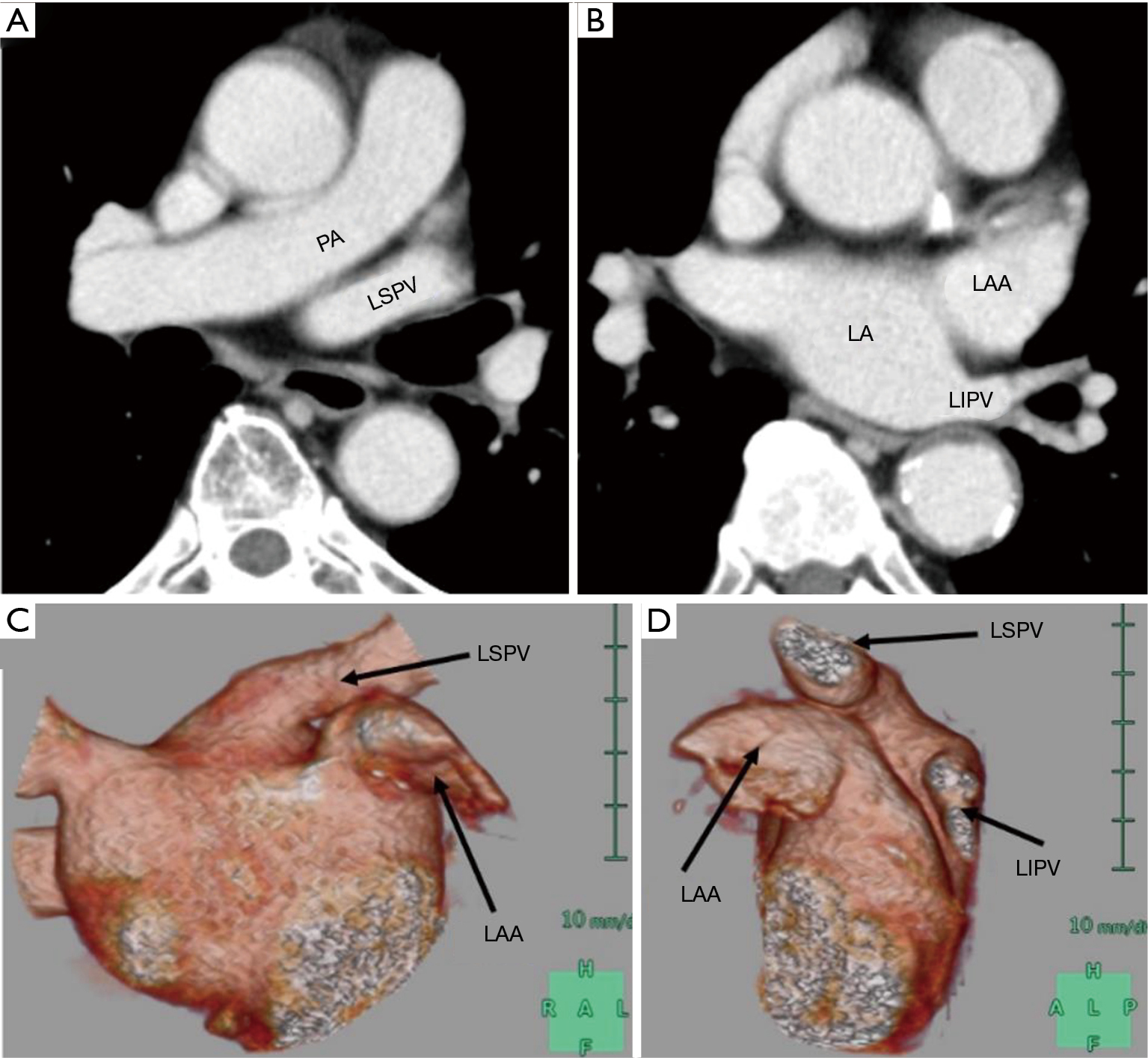 Figure 1 Antero-superior pattern. (A) Image of the antero-superior pattern with the inlet of the LSPV can be seen superior to the LAA; (B) the LAA is located at the level of the inlet of the LIPV on pre-operative axial CT imaging; (C,D) location of the LSPV antero-superior to the LAA shown on three-dimensional reconstruction of the PV, LAA, and LA from CE-CT images. LSPV, left superior pulmonary vein; LAA, left atrial appendage; LIPV, left inferior pulmonary vein; CE-CT, contrast-enhanced computed tomography; LA, left atrium.

Measurement of the length of superior PV stump after LUL

Plain CT or CE-CT was performed 1–3 months after surgery. The length of the LSPV stump after LUL was defined as the linear distance from the inlet of the LSPV to the stump, measured on postoperative CT by making oblique multi-planar reconstruction (MPR) formatted images, using CT workstation tools (Ziostation2, Ziosoft Inc., Tokyo, Japan) (Figure 3) (6). 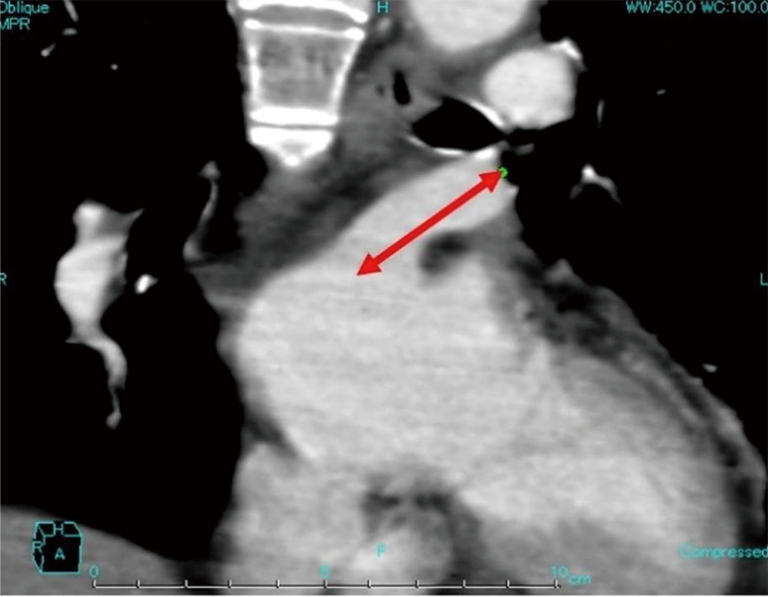 Analysis of the difference in the length of the LSPV stump after LUL between the antero-superior and postero-inferior pattern was performed using a t-test. This statistical analysis was performed using the StatMate IV software program (Advanced Technology for Medicine and Science Co., Ltd., Tokyo, Japan). A P value of less than 0.05 was regarded as significant.

Eighty-five patients met our inclusion criteria for enrollment, 58 men and 27 women, with a mean age of 72 (range, 17–85) years. Preoperative comorbidities consisted 39 cases of hypertension, 17 cases of diabetes mellitus, 15 cases of chronic obstructive pulmonary diseases, 14 cases of ischemic heart diseases, 9 arrhythmias and 7 cerebral vascular diseases. The operative approaches were 62 VATS, and 23 open thoracotomies. The median days of chest drainage were 5 (range, 2–19) days. Median hospital length of stay was 8 (range, 4–26) days. Postoperative complications consisted 5 cases of prolonged air leakage, 4 cases of atrial fibrillation, and a cerebral infarction. There were 80 cases of primary lung cancer, 3 of metastatic lung tumors, and 2 of benign tumors. Of the primary lung cancers, there were 51 adenocarcinomas, 20 squamous cell carcinomas, 3 of small cell carcinomas, 3 of pleomorphic carcinomas, 2 of adenosquamous cell carcinomas, and 1 of large cell carcinoma. Pathological stage of the primary lung carcinomas consisted of 55 cases of Stage I, 11 of Stage II, and 14 of Stage III. 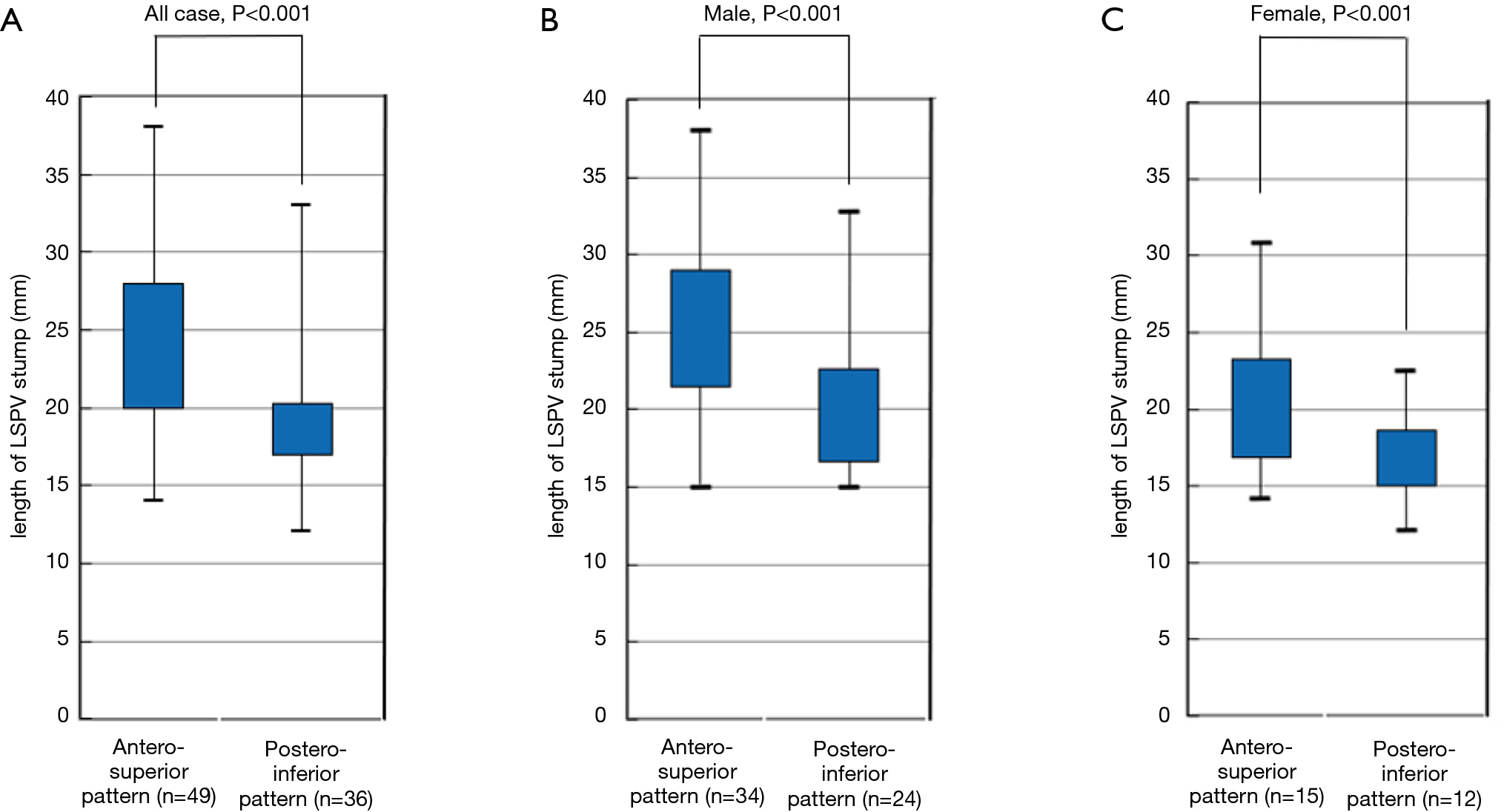 Figure 4 The length of the LSPV stump after LUL is significantly shorter for the antero-superior than the postero-inferior pattern (A) in all cases, (B) in male patients, (C) and in female patients. LSPV, left superior pulmonary vein; LUL, left upper lobectomy.

A previous study identified an increased prevalence of thrombosis development with longer PV stumps (7). In a short PV stump, blood would flow from the LA throughout the PV stump, while in a longer PV stump, turbulent flow or stasis might result as blood flow from the LA likely does not spread throughout the PV stump (5). Our finding that the anatomical location of LSPV was associated with the length of the LSPV stump could be used for a more effective and efficient peri-operative management, such as administration of anticoagulant therapy.

The limitations of our study need to be acknowledged. Firstly, as the study was a retrospective study, selection bias was neglected. Secondly, we were unable to conclude whether long LSPV stumps are related to thrombus formation causing cardiogenic stroke, because only 28 patients underwent postoperative CE-CT. Thirdly, our sample size with small and only one patient had stroke postoperatively. We could not make occurrence of stroke after left lower lobectomy as an outcome of this study. Therefore, we could not clarify the relation between the anatomical relationship between the LSVP and LAA and the risk of stroke. A future study is needed to confirm or refute findings.

Reporting Checklist: The authors have completed the Strengthening the Reporting of Observational Studies in Epidemiology (STROBE) Statement reporting checklist. Available at http://dx.doi.org/10.21037/jtd-20-1170

Conflicts of Interest: All authors have completed the ICMJE uniform disclosure form (available at http://dx.doi.org/10.21037/jtd-20-1170). The authors have no conflicts of interest to declare.

Ethical Statement: The authors are accountable for all aspects of the work in ensuring that questions related to the accuracy or integrity of any part of the work are appropriately investigated and resolved. The study was conducted in accordance with the Declaration of Helsinki (as revised in 2013). The approval from the Institutional Review Board of this study was waived because of the retrospective character of the study. Informed consent was waived due to the retrospective nature of the study.