Restrictive fluid administration protocol, which aims for “zero fluid balance (FB),” has been reported to reduce postoperative complications and shorten hospital stay (1,2). Particularly, fluid overload is a risk factor for acute lung injury after surgeries such as lung resection (3-5), and thus, restrictive fluid administration, which aims for avoiding positive FB and targeting zero FB, has been increasingly emphasized (6). However, Wu et al. recently reported that excessive fluid restriction during surgery, as well as fluid overload, is associated with elevated postoperative complications after minimally invasive lobectomy of the lung (7). This is an important issue in relation to the fact that excessive fluid restriction induces tissue hypoperfusion and reduces end-organ perfusion (8). In other words, either positive or negative FB may increase complications as well as lengthen hospital stay after thoracic surgery.

Therefore, this study aims to investigate whether FB status during and up to 24 hours after lung resection surgery is associated with 30-day unplanned readmission rate. We hypothesized that both perioperative positive and negative FB status would be associated with an increase of 30-day unplanned readmission rate. This retrospective observational study was performed in accordance with the STROBE reporting checklist (available at http://dx.doi.org/10.21037/jtd-20-1474).

This study also conformed to the provisions of the Declaration of Helsinki (as revised in 2013). This retrospective observational study was approved by the institutional review board (IRB) of the Seoul National University Bundang Hospital (SNUBH) (IRB approval number: B-1903/528-101; approval date: February 25, 2019). The requirement to obtain informed consent was exempted in consideration of the retrospective design, where medical records are reviewed after completion of care.

FB was calculated during and up to 24 hours after surgery, because the length of hospital stay of patients with relatively simple lung surgery such as wedge resection was relatively short (2–3 days), and it was used in the RELIEF trial to define fluid management strategy (15). We used the equation reported in previous studies to compute cumulative FB (%) (16,17):

For example, 5% positive in a patient whose body weight was 50 kg means 2,500 mL positive FB. All types of intravenous and enteral fluids used for maintenance and resuscitation were included in the input fluid: colloids, crystalloids, blood products, drug infusions, and enteral and parenteral nutrition. The amount of drugs that were infused during and up to 24 hours after lung cancer surgery was also included in the calculation of perioperative FB. During surgery, remifentanil was usually infused by continuous infusion using a syringe pump, while rocuronium or cisatracurium was infused by bolus injection. All types of body fluids were included in the output fluid: estimated blood loss (mL); output from drains; rectal, orogastric, and nasogastric output; and urine. According to the standard in previous studies (18), patients were divided into the positive (>5%), normal (0–5%), and negative (<0%) groups on the basis of the cumulative FB computed as above.

In SNUBH, fluid management during surgery was performed by anesthesiologists during the study period, and a balanced crystalloid was used as the main fluid according to our protocol. However, hydroxyethyl starch was sometimes used for fluid resuscitation according to the discretion of anesthesiologists in situations such as acute hypovolemic shock during surgery. After surgery, fluid management was performed by the thoracic surgeons. Although there was no specific protocol or guidelines for fluid management in the intraoperative and postoperative period, most anesthesiologists and thoracic surgeons in our hospital made efforts to achieve zero FB during the perioperative period for patients who underwent lung cancer surgery in order to avoid excessive fluid overload during the study period.

The following data were extracted as covariates for this study: physical characteristics [age, body mass index (kg·m−2), sex], calculated distance from home to hospital based on ZIP code (km), socioeconomic status-related information [insurance type (National health insurance program/medical aid beneficiary program), marital status (never married/married or living together/divorced or separated/widowed), occupation (office worker/licensed job/house work/self-employed/student, military, laborer, or unemployed), final educational attainment (lower than high school/more than or equal to high school, lower than college/more than or equal to college)], preoperative comorbidities [American Society of Anesthesiologists’ physical status, hypertension, diabetes mellitus, coronary artery disease (from stable angina to myocardial infarction), cerebrovascular disease, chronic obstructive pulmonary disease, tuberculosis, asthma, chronic kidney disease, anemia, heart failure, and dyslipidemia], operative data [video-assisted thoracoscopic surgery, surgery time, intraoperative remifentanil and rocuronium dosage, epidural analgesia, propofol-based total intravenous anesthesia, hydroxyethyl starch use, estimated blood loss, transfusion of packed red blood cells, type of surgery (lobectomy, sleeve lobectomy/wedge resection, segmentectomy/bilobectomy, pneumonectomy)], and histology of NSCLC (squamous cell carcinoma/adenocarcinoma/large cell, sarcomatoid type, and mixed type). Patients in the medical aid beneficiary program are those who are classified to have low income, and most of their hospital charges are paid by the government. Furthermore, for the patients in the national health insurance program, approximately two-thirds of their hospital charges are covered by the government. We included the year of surgery as a covariate for three reasons: (I) surgical techniques and anesthetic management used in our institution have improved from 2005 to 2018; (II) a previous study in 2013 reported that hydroxyethyl starch use might be associated with a higher risk of acute kidney injury, and this could affect the daily practice in our institution (19); and (III) the disease severity of patients who underwent lung cancer surgery in our institution might vary according to the year of surgery.

The primary endpoint of this study was 30-day unplanned readmission after lung cancer surgery.

Baseline characteristics of the patients are presented as mean values with standard deviations (SDs) or as numbers with percentages. The simple relationship between the cumulative FB during and up to 24 hours after surgery was evaluated using restricted cubic splines. First, we performed a univariable logistic regression analysis to examine the individual associations between 30-day unplanned readmission and all covariates. Next, by using the criterion of P<0.2, we selected covariates from the univariable logistic regression analysis for the final multivariable logistic regression model. Considering the possibility of multicollinearity, continuous variables and categorical variables (positive, normal, and negative group) for cumulative FB were included in separate multivariable models. The goodness of fit of each multivariate model was tested with the Hosmer-Lemeshow test. The results of the logistic regression model are presented as odds ratios (ORs) with 95% confidence intervals (CIs). All analyses were performed using R version 3.6.1 (R Foundation, Vienna, Austria), and P<0.05 was deemed statistically significant.

Between January 2005 and February 2018, 3,084 patients aged 19 years or older underwent curative resection for primary lung cancer. From them, 156 patients who underwent repeat lung surgeries due to recurrence, 463 patients with incomplete or missing data, 48 patients who underwent reoperation during hospital stay after initial surgery, and 5 patients who died during hospital stay after surgery were excluded, resulting in a total of 2,412 patients in the final analysis. From these patients, 200 had total 30-day readmission after discharge (8.3%, 200/2,412), 164 of whom had unplanned readmission (6.9%, 164/2,412) (Figure 1). The chief complaints of patients who had 30-day unplanned readmission are presented in Table 1, and the most common reason for unplanned readmission was pulmonologic symptoms (58.5%, 96/164). The baseline characteristics of all patients included in the study are shown in Table 2. The mean (standard deviation) perioperative cumulative FB of patients who underwent lung cancer surgery was 1.6% (1.5%). A total of 2,283 (94.7%) patients had normal cumulative FB, 56 (2.3%) had negative FB, and 73 (3.0%) had positive FB. 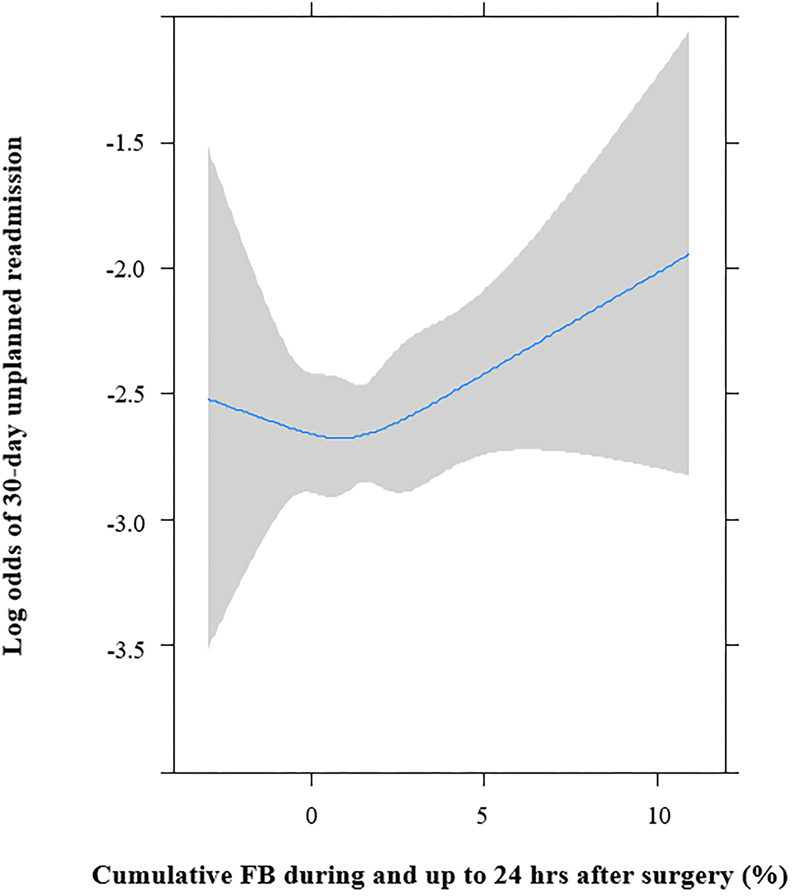 Figure S1 Restricted cubic splines for log odds of 30-day unplanned readmissions according to cumulative FB during and up to 24 hours after surgery (%). FB, fluid balance. 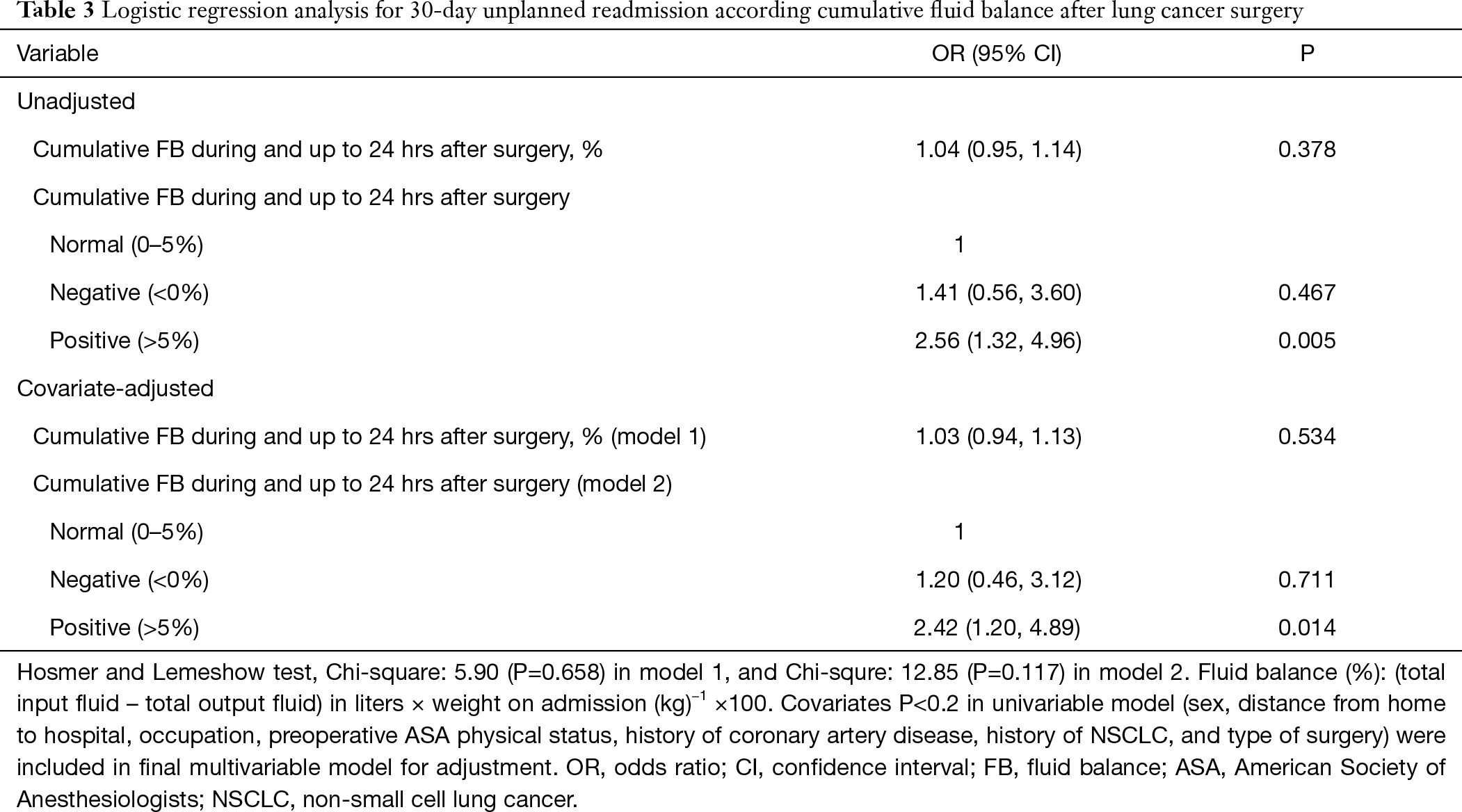 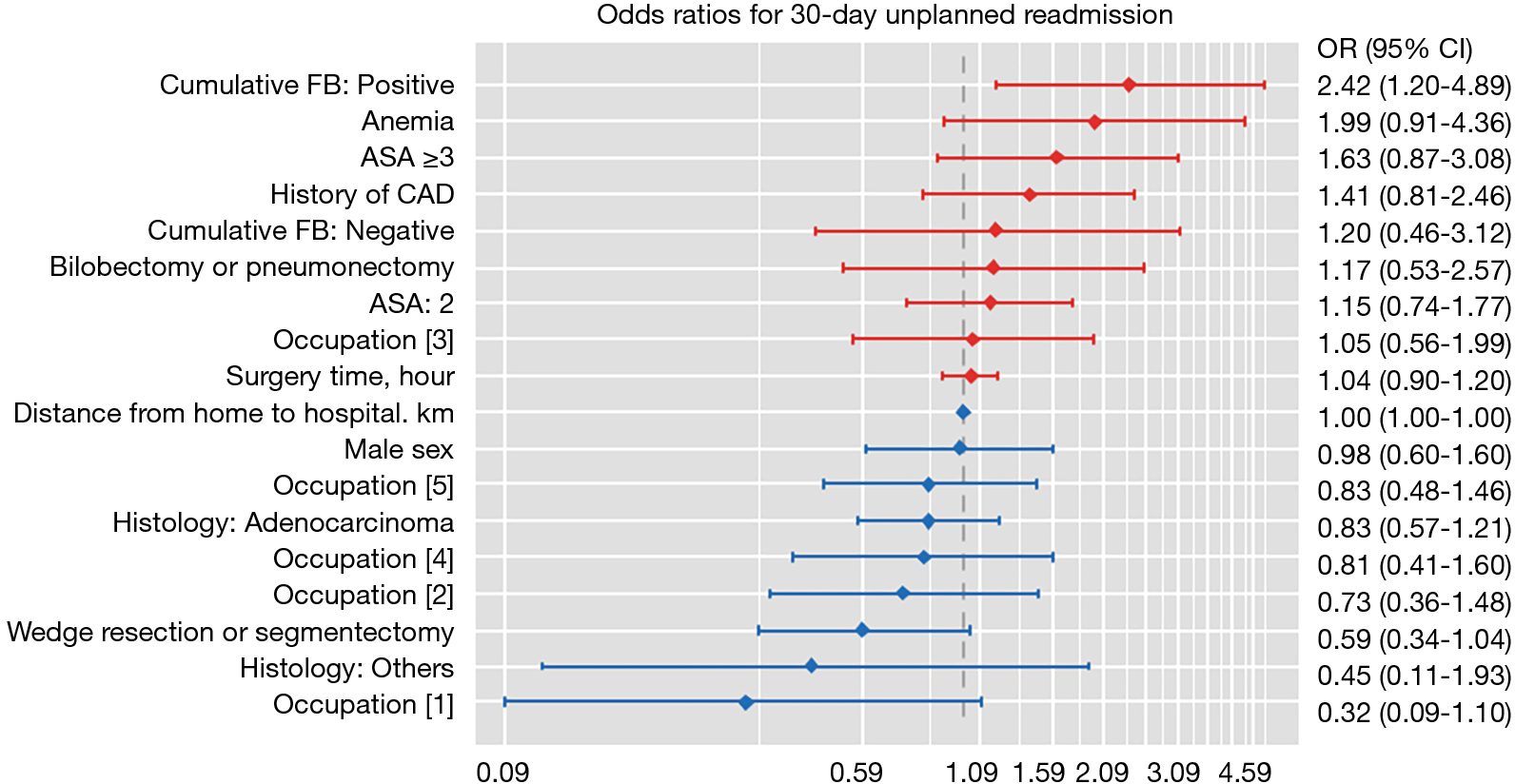 Another interesting and noteworthy aspect is that our findings are contradictory to a previous report from our institution, where 30-day unplanned readmission rate after major abdominal surgery was not associated with perioperative cumulative FB status (20). The main reason for this discrepancy is likely to be attributable to the difference in the type of surgery involved. Generally, several studies have suggested that restrictive fluid regimen has no benefit for reducing postoperative complications after abdominal surgery (21-23). Moreover, in the RELIEF trial reported by Myles et al., the liberal fluid regimen group had lower incidence of acute kidney injury after major abdominal surgery than the restrictive fluid regimen group (15). In other words, positive FB of >5% might be associated with the 30-day unplanned readmission rate in our study because we included diverse lung cancer surgeries and our study patients consisted of a surgical population for whom pulmonary complication was the most important postoperative complication (3).

The present study has a few limitations. First, there were some limitations due to retrospective design of the study. For example, there might be residual confounders that needed to be controlled by multivariable adjustment, and the quality and accuracy of data might be limited as compared to those of the data obtained in a prospective study. Second, our findings have limited generalizability because the study was conducted at a single center, and the results of this study might not be applicable to other institution. Third, because we could not capture data regarding readmission to other hospitals, our results might be biased. However, we used the distance from home to the hospital based on the postal code as an important covariate in the multivariable model to reduce the bias. Fourth, the relatively small sample event number (164, 6.9%) might be a concern and affect the result of our study. However, to overcome this statistical limitation, we initially screened the covariates by using a criteria of P<0.2 in the univariable logistic regression analysis, for constructing final multivariable logistic regression model. As a result, 10 variables were included in the final multivariable model, and our event per variable (EPV) was 16.2. Traditionally, an EPV >10 was recommended for multivariable logistic regression modelling to avoid overfitting (24), suggesting that our study might not have suffered from overfitting. Lastly, the sample sizes of the negative and positive FB groups were very small, which might have affected on our study. Therefore, the results should be interpreted carefully, and further study is needed with a larger sample size.

In conclusion, our findings show that perioperative positive FB (>5%) is associated with elevated 30-day unplanned readmission rate among patients who underwent lung cancer surgery. Future prospective studies are needed to confirm these findings.

Reporting Checklist: The authors have completed the STROBE reporting checklist. Available at http://dx.doi.org/10.21037/jtd-20-1474

Conflicts of Interest: All authors have completed the ICMJE uniform disclosure form (available at http://dx.doi.org/10.21037/jtd-20-1474). The authors have no conflicts of interest to declare.

Ethical Statement: The authors are accountable for all aspects of the work in ensuring that questions related to the accuracy or integrity of any part of the work are appropriately investigated and resolved. This study also conformed to the provisions of the Declaration of Helsinki (as revised in 2013). This retrospective observational study was approved by the institutional review board (IRB) of the Seoul National University Bundang Hospital (SNUBH) (IRB approval number: B-1903/528-101; approval date: February 25, 2019). The requirement to obtain informed consent was exempted in consideration of the retrospective design, where medical records are reviewed after completion of care.