The Fontan procedure using a total cavopulmonary connection is the most common procedure performed to treat complex congenital cardiac defects not amendable to biventricular repair (1-3). Despite the palliative nature of the Fontan procedure, good long-term results have been reported in patients with ideal hemodynamics conditions, with a 20-year survival around 74% (4). However, substantial morbidity and mortality have been described, often related to thromboembolic complications and narrowing of the conduits used (5), because the currently available materials are prone to chronic inflammation and they are unable to grow. To overcome these limitations, several groups are working on various biocompatible materials with growth potential, using pediculated autologous pericardial roll or tissue-engineered vascular graft using autologous cells and biodegradable scaffolds (6,7).

In the present paper, we report on the 2-year results of a small series of patients who received a new vascular graft based on a bioabsorbable restorative polymer matrix. Early postoperative results were reported in 2016 (8).

A prospective human clinical investigation to assess the safety and performance of this vascular graft (Xeltis AG, Zurich, Switzerland) was started on a single center, the Bakoulev Center for Cardiovascular Surgery in Moscow, Russian Federation. The study was conducted in accordance with the Declaration of Helsinki (as revised in 2013). The study was approved by the institutional ethics/committee (Clinicaltrials.gov number, NCT02377674), and informed consent was taken from all the patients.

Safety of the device was evaluated by monitoring all graft-related post-operative complications that required redo-surgery, any catheter intervention or which lead to death. Clinical and hemodynamic performance of this conduit was evaluated by analyzing the incidence of loss of functionality requiring intervention.

Five patients (3 males and 2 females) had all underwent a previous bidirectional Glenn shunt, 3 had coiling of aortopulmonary collaterals, and 1 received a modified Blalock Taussig shunt. Average age of the patients at implantation was 6.2±2.9 years (range, 4–12 years), with an average body mass index of 14.5±2.1 kg/m2.

Graft implantation between the inferior vena cava and the right pulmonary artery as an extracardiac conduit was technically successful in all patients as second step of the modified Fontan procedure (3 patients received 18 mm diameter conduit and 2 patients a 20 mm conduit). Mean cardiopulmonary bypass time was 104 min (range, 83–120 min). All patients were operated without aortic cross-clamping. No fenestration was performed in any case.

The data were monitored by an independent clinical research company and all potential serious adverse events were reviewed by an independent clinical review committee. A strict follow-up protocol is performed in all patients. At 24 months, control included clinical assessment, blood test, ECG, echocardiography, MRI, notification of the adverse events (related or not to the implant) and current medication.

The restorative polymer-based vascular conduit is designed to be immediately functional like other available devices, but its physiochemical characteristics should enable cell infiltration and subsequent endogenous tissue formation. The conduit is composed of a bioabsorbable supramolecular polyester and processed by electrospinning. It is obtained by chain-extending poly-caprolactone with 2-ureido-4[1H]-pyrimidinone (8).

All patients underwent a complete clinical and imaging assessment after 24 months postoperatively. They were all doing well with no device-related serious adverse events reported in any of them (no obstruction at the level of the anastomoses or within the conduit). At 2-year follow-up, these pleural events had completely resolved. No new serious adverse advents were reported during the second year of follow-up.

Transthoracic echocardiography (TTE) demonstrated anatomical stability and adequate function of the extracardiac conduit in all patients. This exam had some limitations for the assessment of the proximal and distal portions of the conduit, as it was not always possible to estimate the proximal and distal diameter and wall thickness of the conduits, nor their exact length. However, diameter and wall thickness could be visualized approximatively at the middle of the conduit: the flow through the conduit showed no turbulence or presence of thrombus at 24 months in 4 patients (Table 1). In one patient some degree of turbulence was observed in the conduit, but there was no significant reduction of the diameter. No patient presented with more than mild systemic atrio-ventricular valve regurgitation. 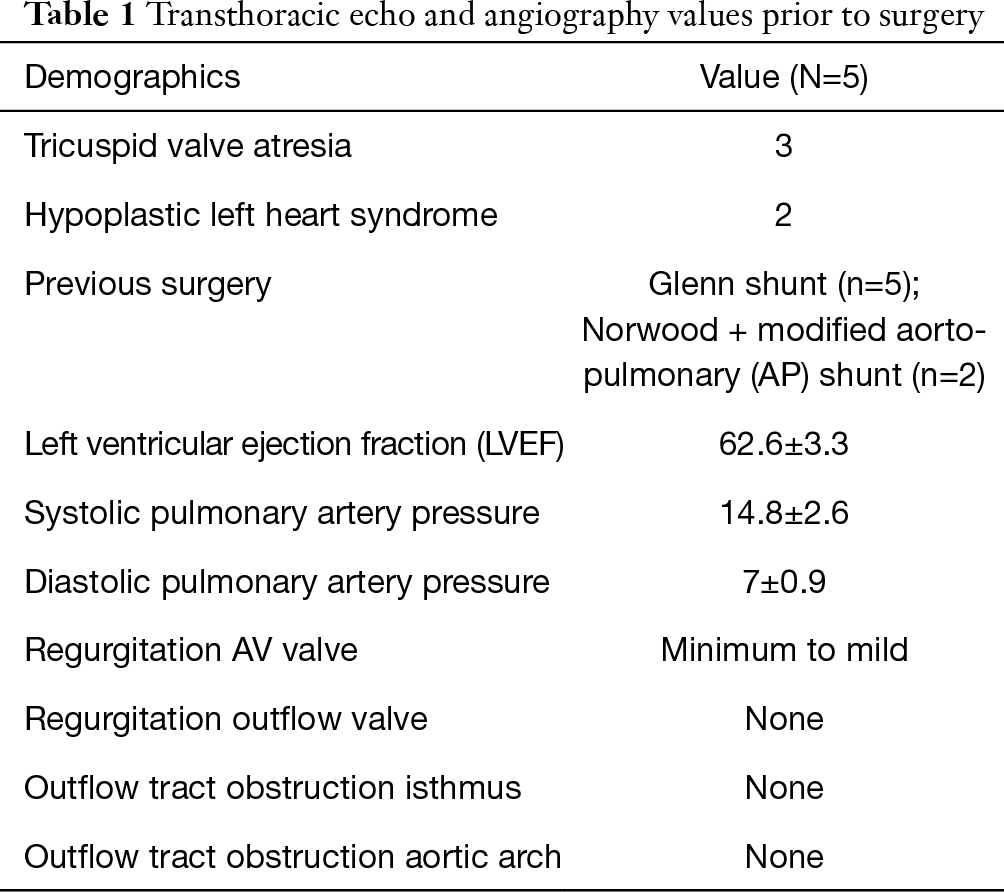 MRI was performed in 4 of 5 patients at the 1-year follow-up and in all patients at 2-year follow-up (Table 2, Figure 1). MRI allowed to routinely assess the conduit diameter (proximal, mid and distal conduit) and visualize blood flow using 4D flow imaging. There was a little change on the MRI concerning conduit diameter from 1- to 2-year follow up with an average increasing in diameter of 1%, 7% and 5% respectively at superior vena cava (SVC) level, mid-segment of the graft, and IVC level (Tables 2,3). In one patient, TTE showed somewhat a turbulent flow (max. velocity 1.6 m/s), but this was not confirmed by MRI 4D flow assessment. 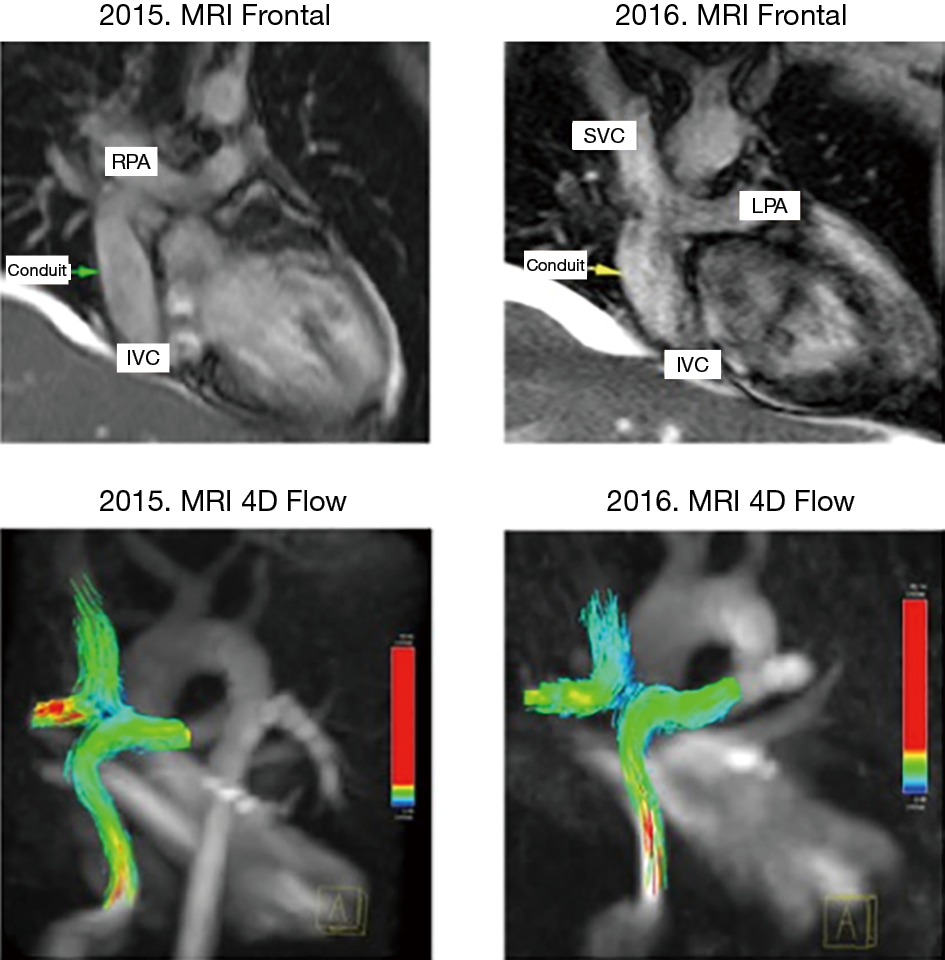 During the first year, 3 patients received warfarin and 2 received salicylic acid. At 24-month follow-up, anticoagulation regimen was maintained in 4/5 patients and one patient under warfarin was switched to salicylic acid.

The Xeltis conduit has been developed and designed to induce autologous repair by endogenous tissue restoration (patients’ own cells). This could potentially allow spontaneous growth of the implant but remains to be demonstrated.

The mid-term clinical and hemodynamic results of the conduit after 24 months follow-up are very satisfying. There are no adverse advents in any of the 5 patients and all of them are in very satisfying clinical condition. Echocardiographic data did not show any significant changes compared to the 12-month visit, excepted in one patient in whom some degree of turbulent flow was observed, although this finding was not confirmed in the MRI study.

No graft-related adverse events have been observed to date in any of these five patients. Pleural effusion was the most common immediate postoperative side-effect following cavopulmonary connection: this has been extensively described in patients following the Fontan procedure (9,10).

The described conduit has been constructed with a restorative polymeric material that allows cells to infiltrate the scaffold and so create a vessel with the patient’s own tissue. Animal studies have shown that this process starts as soon as the conduit has been implanted and continues until total endogenous tissue restoration, with functionality taken over completely by the newly formed tissue (11,12). At 53 weeks, there were just islands of conduit material left within the new vessel. The Xeltis conduit was compared to the available Hancock bioprosthetic valved conduit in adult sheep in the pulmonary artery position. Animals were sacrificed at 2-month (n=6), 6-month (n=6) and 12-month (n=6) and the conduits were examined histologically. Fifteen animals survived until sacrifice, The Xeltis conduits showed mild neo-intimal thickening and begin of biodegradation as early as 2-month with an ongoing process until 12-month. Only 1 of the 18 animals with a Xeltis conduit had significant calcification at 6-months.

Pathologic specimen did not show any significant narrowing of the conduit while neo-intimal thickness showed a peak at 6-month. Inflammatory process reached a maximum at 6-month, the degradation process at 12-month. The wall of the Hankock conduits showed more neo-intimal thickening, narrowing and calcification compared to Xeltis but the leaflets demonstrated minimal changes (11,12).

This innovative therapy has the potential to change the prognosis for patients treated with extracardiac cavo-pulmonary conduits in the Fontan circulation and in pulmonary position (valved conduits) since the currenly used materials do not enlarge as the patients grow. This means that the diameter of the implanted conduit needs to be large enough to allow adult inferior vena cava blood flow (13). Again, this may be a reason leading to pulmonary vein stenosis when the prosthetic conduit lies in front of the right pulmonary veins.

The functionality of the conduit was confirmed by TTE and MRI assessment in all patients, showing lack of thrombus and significant turbulences with good visualization of the blood flow through the conduit. However, the TTE had limitations for assessment of the proximal and distal portions of the conduit, hardly viewable, and the difficulty to estimate the length of the conduit.

An increasing number of “Fontan patients” are now entering adulthood, among growing up congenital heart patients and these patients are facing an uncertain future (14). Due to the increased survival of these patients, long-term complications are becoming more common (15,16); they are often related to thromboembolism and development of stenosis of the available xenografts or artificial conduits (5). Bhat and Sahn have shown that the most common reason for reoperation is stenosis of the conduit, with an occurrence up to 85% (17). The most frequently used conduits for extracardiac Fontan procedure include non-absorbable synthetic vascular grafts such as the ring-reinforced Gore-Tex (PTFE) and Dacron.

The novel restorative vascular graft may provide an interesting alternative for these patients, since it may help reducing the need for reoperation related to the complications associated to a permanent implant. Moreover, the development of an endothelialized thrombo-resistant intimal surface that integrates naturally in the environment could decrease the need for anticoagulation therapy, requiring none to minimal anticoagulation. This would minimize anticoagulation-related complications. This small series confirms the safety of the polymer conduit up to 24 months and more and makes this material non-inferior to currently available conduits (18-20). These benefits may potentially lead to a significant improved quality of life for congenital heart patients requiring surgery with graft implantation not only in the central venous pressure segment but also in other locations.

This small series has a limited follow-up interval but shows that the restorative device can be successfully implanted and may be free from material-related complications. Up to 24 months there was also no documented loss of function. One of the most commonly reported complications after a Fontan procedure, namely graft stenosis and compression of the pulmonary veins was not observed at 24 months follow-up in any of the patients. We are confident that the potential for ongoing narrowing will decrease once the polymer has been absorbed. The observational study will continue to examine the evolution of the conduit in these 5 patients for up to 5 years to gain more information concerning the safety and performance of the device.

Conflicts of Interest: All authors have completed the ICMJE uniform disclosure form (available at http://dx.doi.org/10.21037/jtd-19-739). This clinical study was sponsored by Xeltis, and all payments were made to the hospital. The authors attest that they had full freedom to explore the data and analyze the results independently from the sponsor and that they had sole authority to make the final decision to submit the material for publication. AL, MC and OS are employed by and hold stock options of Xeltis. ATC is a member of the Medical Advisory Board of Xeltis. The other authors have no conflicts of interest to declare.

Ethical Statement: The authors are accountable for all aspects of the work in ensuring that questions related to the accuracy or integrity of any part of the work are appropriately investigated and resolved. The study was conducted in accordance with the Declaration of Helsinki (as revised in 2013). The study was approved by the institutional ethics/committee (Clinicaltrials.gov number, NCT02377674). and informed consent was taken from all the patients.