Efficacy of standard chest compressions in patients with Nuss bars

Minimally invasive repair (Nuss procedure) has rapidly become the standard of care for repair of pectus excavatum (PE) deformities (1). The procedure involves intrathoracic placement of metal (titanium or stainless steel) bars which elevate the deformed chest wall (Figure 1). The implants are left in place for 2–3 years while the chest wall remodels then removed during an outpatient procedure (2,3). Excellent, durable results have made the Nuss repair the procedure of choice by most patients and surgeons (Figure 2). Originally described for treatment of children and early adolescents (4), the procedure has been successfully extended into repair of adult populations (3,5,6). The presence of the intrathoracic bars not only changes the architecture of the chest wall, but while in place, impacts the normal excursion and compliance of the anterior chest wall (7). This compliance is integral to delivering effective chest compressions during cardiopulmonary resuscitation (CPR) in the event of a cardiac arrest (7,8). Cardiac and thoracic pumps facilitate blood flow to vital organs through the heart during CPR. With chest compression, the process involves mechanically compressing the heart between the sternum and spine. Chest compression depth is the objective parameter for determining standard CPR success with a recommended depth of 5 cm by the American Heart Association (AHA) (9,10). Recent studies have suggested that a chest compression depth approaching 5 cm (4.7 cm) has an impact on survival rates in out-of-hospital events (11). Our study was performed to assess the amount of force required to perform adequate chest compression depth in patients after a Nuss procedure. Additionally, alternative CPR methods were reviewed for consideration of use in patients after PE repair with Nuss bars in place. 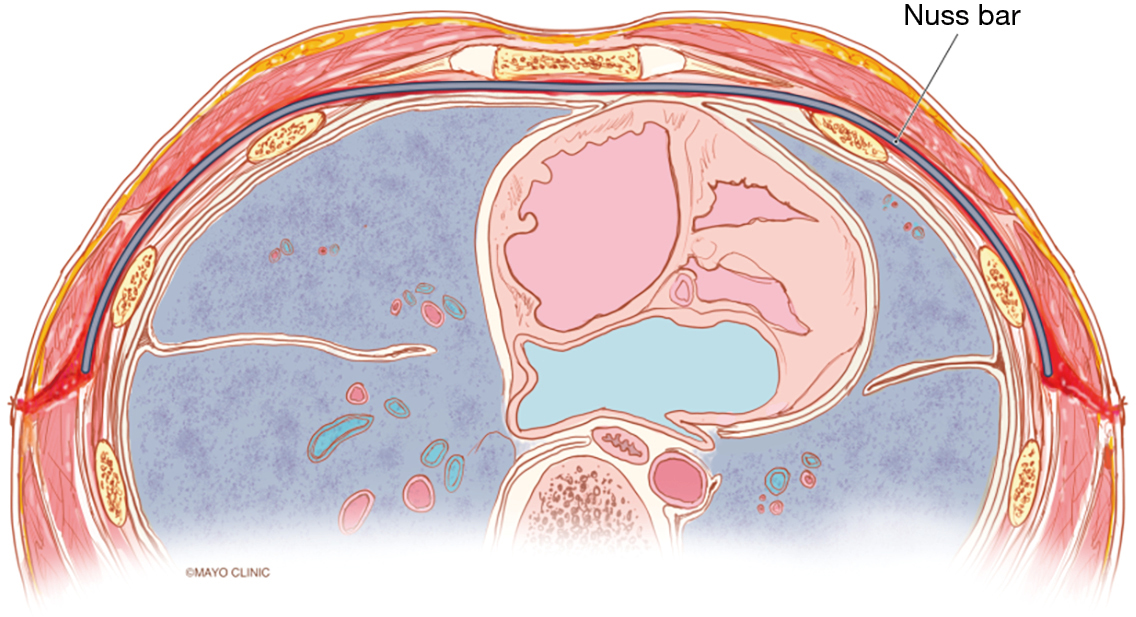 Figure 1 Drawing of the intrathoracic placement of Nuss bars for repair of pectus excavatum deformity.

A lumped element elastic model was developed to simulate the relationship between chest compression forces and displacement in the presence of Nuss bar(s). The AHA recommends a compression depth of about 5 cm (approx 2”) to ensure patient survival (12). As such, the model focussed on the amount of force required to achieve a depth of 5 cm under different chest elasticity conditions.

During CPR chest compressions, the applied forces displace the sternum which leads to the deformation of the thorax. As such, it was assumed that the sternum deflects up and down on a dynamic spring coefficient defined in Eq. [1] developed by Gruben et al. (12). It was also assumed that the costal cartilage and anterior rib bones’ elasticity is the primary factor for the elastic response of the human sternum. Therefore, during chest compressions, the elasticity of the chest operates parallel to the stiffness of the Pectus bar(s) as illustrated in the figure below (Figure 3).

The lumped element elastic model was adopted to simulate the applied force on the chest to chest displacement relationship in the presence of one to three metal bars in comparison to a chest without metal bars. Hook’s Law was used to determine the effective force required to displace the sternum by some depth x given an effective elastic coefficient (keff) as summarized in Eq. [2] below.

Since the Nuss bar has to bend inwards towards the direction of the spine in combination with the coastal cartilage and anterior ribs, the effective elasticity was the sum of the spring constants as illustrated in Eq. [3] below.

and E is the young modulus of the Nuss bar. L is the bendable length, b is the breadth and h is the depth/height of the cross-section area of the Nuss bar. Secondly, the realized force and 5 cm deflection were plugged to the Hooke’s Law in Eq. [2] above to solve for k as the elastic constant of the Nuss bar.

For the Nuss bar, a sample bar with the following measurements was used for an estimated elastic constant: bendable length (L) =20.48 cm, depth (h) =0.3048 cm, and width (b) =1.27 cm. Note that the bendable strength is not necessarily the full length of the Nuss bar. It refers to the relatively flat anterior segment after the bar is bent during the Nuss procedure. Thus, it is assumed that the anterior chest moves contiguously with the posterior and wards together with the Nuss bar.

Finally, the human chest displacement in response to force applied during a chest compression was calculated and plotted in MATLAB using equations defined above.

Applying Eq. [2], the elastic coefficients of the human chest only ranged from 29.4 to 147.78 N/cm with an average of 84.51 N/cm. The maximum force required to displace a chest without Nuss bar(s) to the recommended depth of 5 cm was determined to be 738 N [166 pounds force (lbf)]. Using the same compressive force of 738 N, a chest wall model with Nuss bar(s) resulted in significantly less displacement of the chest as shown in Figure 4. 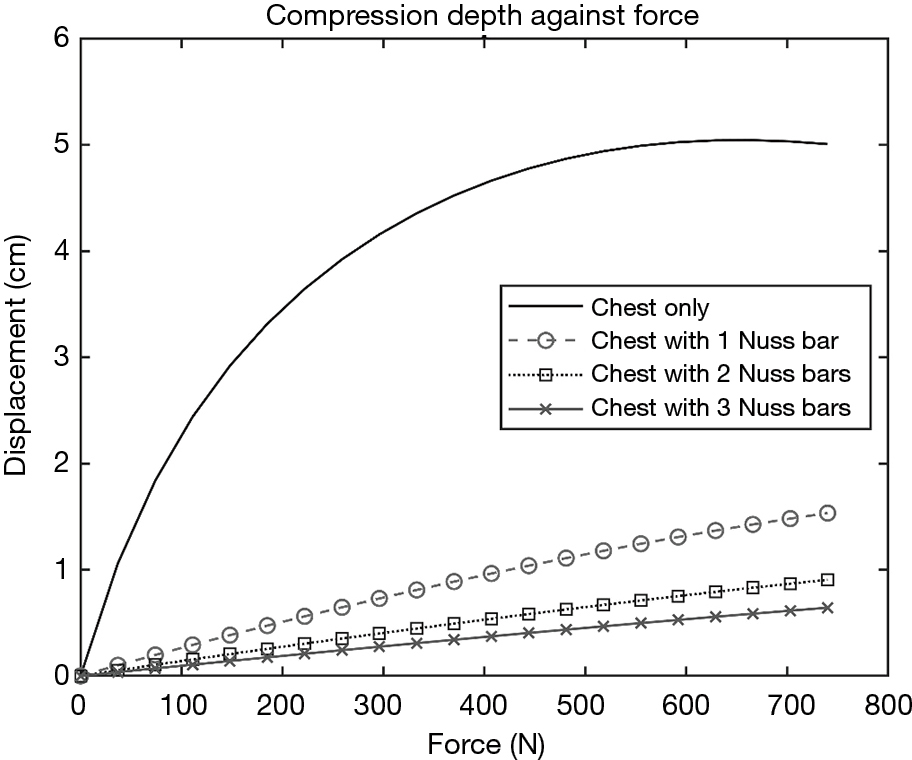 Figure 4 Graph showing how the required compressive force would increase to achieve recommended compression depth due to the presence of Nuss bar(s).

Introduction of the elasticity property of the Nuss bar(s) significantly reduced the dynamic elasticity of the chest’s elastic properties to deform. Unlike native bones which behave like a ceramic material, the metallic bars tend to have a more linear slope in their stress-strain curves. In this case, metal properties seem to be taking over. A compressive force of up to 6,000 N (1,349 lbf) were applied in simulation to demonstrate how much force could be required to displace a chest with Nuss bar(s) to the recommended depth of 5 cm (Table 1). The model showed that excessive forces could be required to achieve such a depth as summarized in Figure 5. 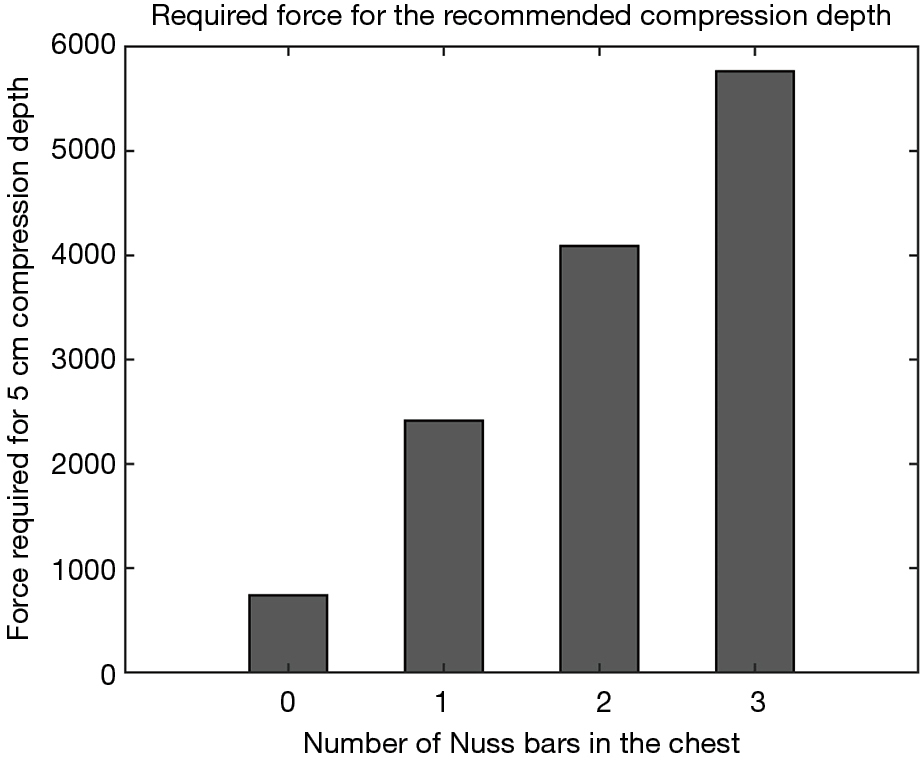 As a center performing high volumes of minimally invasive PE repair in advanced aged adults (3), we initiated this study to assess the feasibility of performing CPR in patients while bars were in place. The Nuss procedure was originally reported for pediatric PE correction using a single bar (4). Multiple bars are now recommended in many patient populations including those with connective tissue disorders (14) and adults (3,5,6,15). As this procedure has been extended into adult populations as old as patients in their 70’s, cardiac events are likely to be more common. Yet, there are very few reports of the use of CPR in patients with Nuss bars (16-19). Although successful resuscitation occurred in a young adult with a single bar, there have been several case reports which describe the limitations of CPR for patients with one or more Nuss Bars (19-22). A summary of these reports is presented in Table 2. One case occurred in the operating room and the bars were removed with subsequent successful resuscitation (19). At least one case report of failed resuscitation had two Nuss bars in place (22). 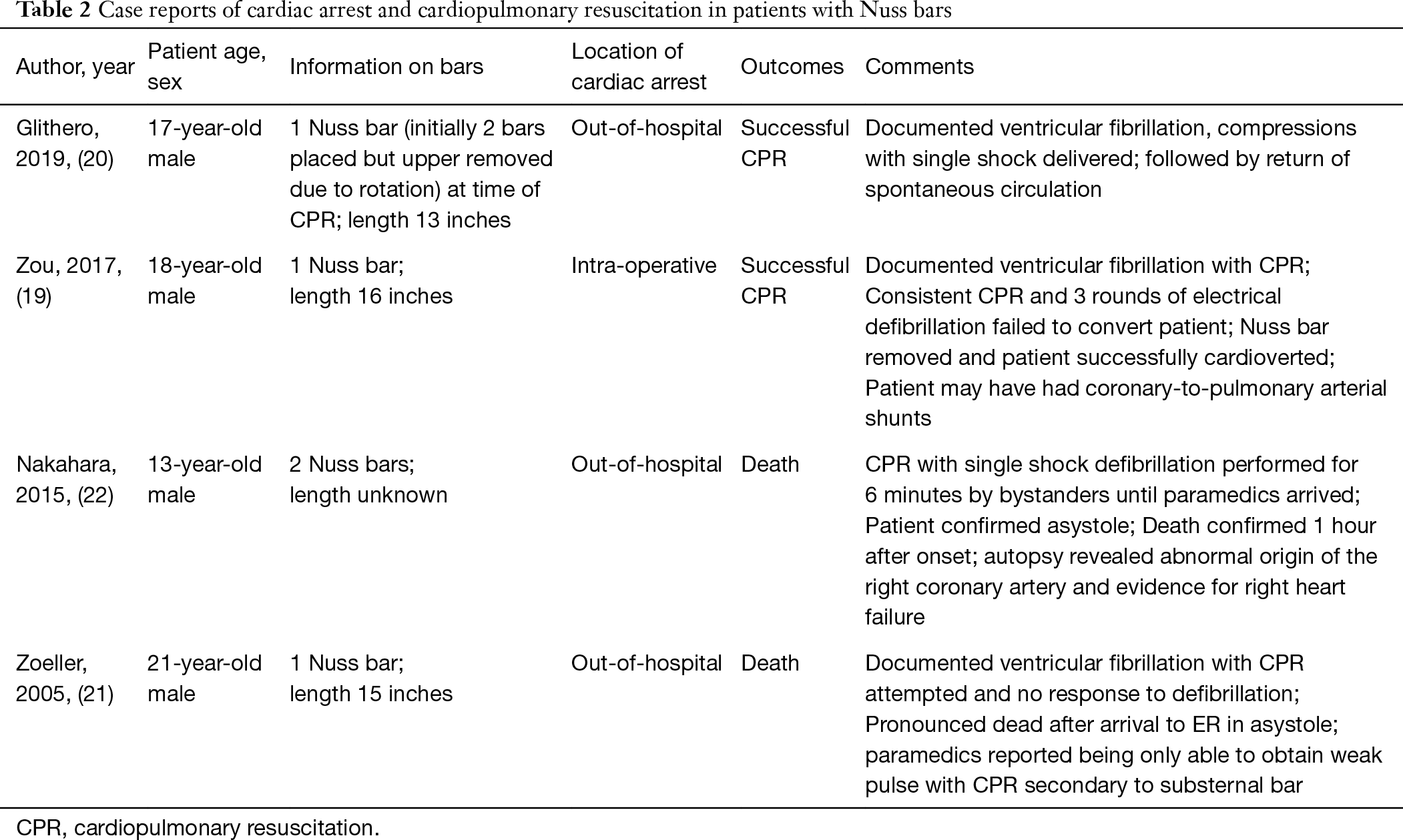 Our model predicted that a substantial increase in the amount of force is required to generate adequate chest compression during CPR in patients with Nuss bar(s). Additionally, the greater the number of Nuss bars present, the greater the force required. In our model, the presence of multiple Nuss bar(s) predicts that manual chest compressions would be potentially ineffective altogether. In addition, current CPR devices are not capable of compressing a chest with this level of force (23,24). In our model, the forces required for adequate CPR were approximately: (I) no bars 740 N (166 lbf); (II) 1 bar 2,500 N (560 lbf); 3 bars 5,500 N (1,230 lbf). Furthermore, the accompanying high stresses of such a magnitude of force may be associated with potentially serious injuries. As a result, the use of chest compressions during CPR in patients with Nuss Bars is unlikely to result in effective or adequate circulation and may actually cause additional harm. Post-operative Finite Element Methods (FEM) have shown that the stress caused by the Nuss bar(s) can be traced from the costal cartilage to the back of the patient based on variations in stiffness (25). Moreover, the findings of this model suggest that attempting to compress the anterior chest wall with the Nuss bar(s) in place could put bone or cartilage in the chest beyond its stress limits and consequently cause injury (26).

Active abdominal compression and decompression-CPR is a novel technique which is reported to improve artificial circulation using thoracic, abdominal and heart pumping mechanisms (27). Although availability is limited in many parts of the world, this relatively new CPR method induces pressure changes in the abdomen triggering the abdominal pump to transmit pressure to thoracic cavity which activates the thoracic and heart pump via the action of the diaphragm (28). A clinical study conducted on the effectiveness of Abdominal Lifting and Compression (AACD-CPR) versus Standard CPR (STD-CPR) by Zhang et al. reported better resuscitation outcomes for the AACD-CPR group as compared to the STD-CPR group. In the study, patients with cardiac arrest were randomized to receive both techniques. According to the report, patients in the AACD-CPR group had a significantly higher heart rate and lower mean arterial pressure (MAP) than those in the STD-CPR group (heart rate: 106.8 versus 79.0; MAP: 60.0 versus 67.3 mmHg (28). Perhaps more striking, the AACD-CPR led to a higher restoration rate of spontaneous circulation (ROSC) than STD-CPR (50% more than STD-CPR) and was associated with an increase in survival rate of patients (28). While there are no reports of the use of AACD-CPR after pectus repair, Zhang et al.’s findings suggest that this alternative method of CPR may have potential utility in patients with Nuss bars.

We continue to perform a modified Nuss as our experience has found this to be a superior for repair of PE in the majority of patients. Repair provides cardiopulmonary benefits including improved cardiac output and strain (29). Repair with an open approach often requires metal stabilization in the form of a strut bar or plating and is not exempt from inadequate and complicated CPR. We have not performed CPR in any of our Nuss patients; however, we have experienced unsuccessful resuscitation after the open Ravitch procedure.

Our study was performed to assess the amount of force required to perform adequate chest compression depth in patients after PE repair with Nuss bars in place. The results of this study have limitations to be considered including the inability to account for the 3-dimentional elasticity of the chest wall not in contact with the metal implants. Lateral expansion of the ribs due to elasticity and even fracture may improve the ability to force compression of the anterior chest wall. Additionally, the chest compression forces and displacement presented here do not necessarily represent the cyclic compressions as prescribed in standard CPR. They rather represent a one-time compression with undefined speed. Consequently, the damping effect of the chest was not considered in the study. The parameters used in this model were derived from multiple sources and used a limited sample size in deriving the values the study has adopted. Lastly, the assumptions made on the use of various laws of physics and biomaterials were based on simplifying the complex anatomy of the chest to understand its interaction with the Nuss bar(s) and may not translate to human subjects.

Conflicts of Interest: All authors have completed the ICMJE uniform disclosure form (available at http://dx.doi.org/10.21037/jtd-20-702). DEJ reports personal fees and other from ZimmerBioMet, Inc., outside the submitted work; in addition, DEJ has a patent ZimmerBioMet with royalties paid. DEJ discloses consulting and intellectual property rights under Mayo Clinic Ventures with Zimmer Biomet, Inc. DEJ also serves as an unpaid editorial board member of Journal of Thoracic Disease from Dec 2018 to Nov 2020. The other authors have no conflicts of interest to declare.

Ethical Statement: The authors are accountable for all aspects of the work in ensuring that questions related to accuracy or integrity of any part of the work are appropriately investigated and resolved.