The study of pathogenesis and pathogenicity demonstrated that bacterium could invade the blood circulation system to grow, propagate, and release bacterial toxins and other metabolites which are harmful to human cells.

There are nearly 300 species of fungi which pose substantial risks of human diseases around the world, among whom invasive candidiasis (IC) is a leading cause of mycosis-associated mortality (1). Clinically, pathogenic fungi can be divided into two parts, one is superficial mycoses which mainly invade the skin, hair and fingernail, while the other is deep fungal infection (DFI) which mostly encroach mucous membrane, deep tissues, viscera, and even lead to the systemic disseminated infections. The worldly incidence rate of fungal disease is gradually increasing, and the reasons are many. The development of medical and surgical management, including hematopoietic stem cell transplantation (HSCT), solid organ transplantation (SOT) and so on, may result in the high frequency of fungal healthcare-associated infections (HAIs) (2-4).

So far, blood culture is regarded as the current “gold-standard” method for the diagnosis of clinically bacterial or fungal infections and is still in widespread use. However, it is time-consuming, tedious and error-prone. What’s more, one of the biggest limitations of conventional culture method is that not all pathogens are suitable to be cultured, which may finally result in the lower detection rate and left untreated. Disappointingly, the data showed that the overall positive rate remained at a relatively low level, about 30% to 40% (5). The data was calculated without regard to the standardized operation, adequate capacity of blood samples and high clinical suspicion of blood-stream infection.

Enzyme-linked immunosorbent assay (ELISA)-based hybridization, fluorescence-based real-time detection, liquid or solid phase microarray detection and matrix-assisted laser desorption/ionization-time of flight mass spectrometry (MALDI-TOF MS) are parts of the innovative molecular diagnostic methods of bacterial or fungal infections. Different methods mainly rely on different detection principles. For instance, Sanger sequencing and database recognition, and MALDI-TOF MS mainly base on the tremendous nucleic acids sequences of pathogens, while ELISA works effectively in accordance with the antigen-antibody reactions. Similarly, these molecular methods also in the face of the limitation of detecting only a few specific pathogens (5,6).

Currently, next-generation sequencing (NGS) technology has been applied in medical microbiology because of its multiple advantages in the diagnosis of bacterial or fungal infections. NGS is a novel technique that has the characteristics of high-throughput capabilities, broad applicability, accuracy and relatively rapid turnaround time. By means of identifying the nucleotides of clinical samples and comparing against the catalogue library, NGS is capable of detecting the possible causative agents (7). In recent years, several reports had illustrated that a growing number of pathogens could be discovered by NGS technology (8,9).

Nowadays, infectious diseases have been a severe public health problem. An urgent, accurate detecting mean of bacterial or fungal infections is needed, not only for health care, but also for disease control and hospital management. In this study, NGS was compared with traditional culture method so as to determine existence of bacteria or fungi from various targeted samples.

We present the following article in accordance with the Materials Design Analysis Reporting (MDAR) reporting checklist (available at http://dx.doi.org/10.21037/jtd-20-930).

This study enrolled a total of 20 patients who were diagnosed with bacterial or fungal infections in tuberculosis department or tumor department at the Shanghai Pulmonary Hospital of Tongji University, China, between January and September 2019. In the whole cohort, 11 (55.0%) were male and 9 (45.0%) were female. The average age of all patients was 44.6 years. The study was conducted in accordance with the Declaration of Helsinki (as revised in 2013) and was approved by Shanghai Pulmonary Hospital (ethical number K19-158). Samples were obtained following written informed consent from all patients. All clinical samples from patients diagnosed bacterial or fungal infections were collected according to standard procedures.

According to the manufacturer’s operational guidebook, TIANamp Micro DNA Kit (DP316, TIANGEN BIOTECH, Beijing, China) was applied to the process of DNA extraction from 300 µL of different samples.

By means of DNA-fragmentation, end-repair, adapter-ligation and PCR amplification, DNA libraries were constructed. Agilent 2100 was used for quality control of the DNA libraries. Quality qualified libraries were sequenced by BGISEQ-50 platform.

The statistical analyses were performed using Statistical Package for the Social Sciences (SPSS) 22.0 statistical software (IBM SPSS, Chicago, IL, USA). The fourfold table was drawn and all data were acquired including the detective rate. The McNemar’s χ2 test for a matched fourfold table were used to compare the NGS and traditional culture results.

Data analysis of the clinical samples

Clinical samples of bacterial and fungal infections were tested by NGS technology or conventional culture method. The detailed results of 20 patients who were diagnosed with bacterial and fungal infections by NGS and culture method were demonstrated in the Table 1. According to Table 1, the same patient could carry multiple pathogens by means of NGS and culture method. Hence the Table 2 lists the count of detectable pathogens numbers and classifications of clinical patients’ samples. As can be seen in Table 2, 9 bacteria and 8 fungus were identified by traditional culture method. By comparison, 79 bacteria, 4 fungus and 7 viruses were identified through NGS technology. In addition, by the way of NGS, one kind of mycoplasma was identified. Overall, 88 bacteria 12 fungus and 7 viruses were detected by combining traditional culture and NGS. 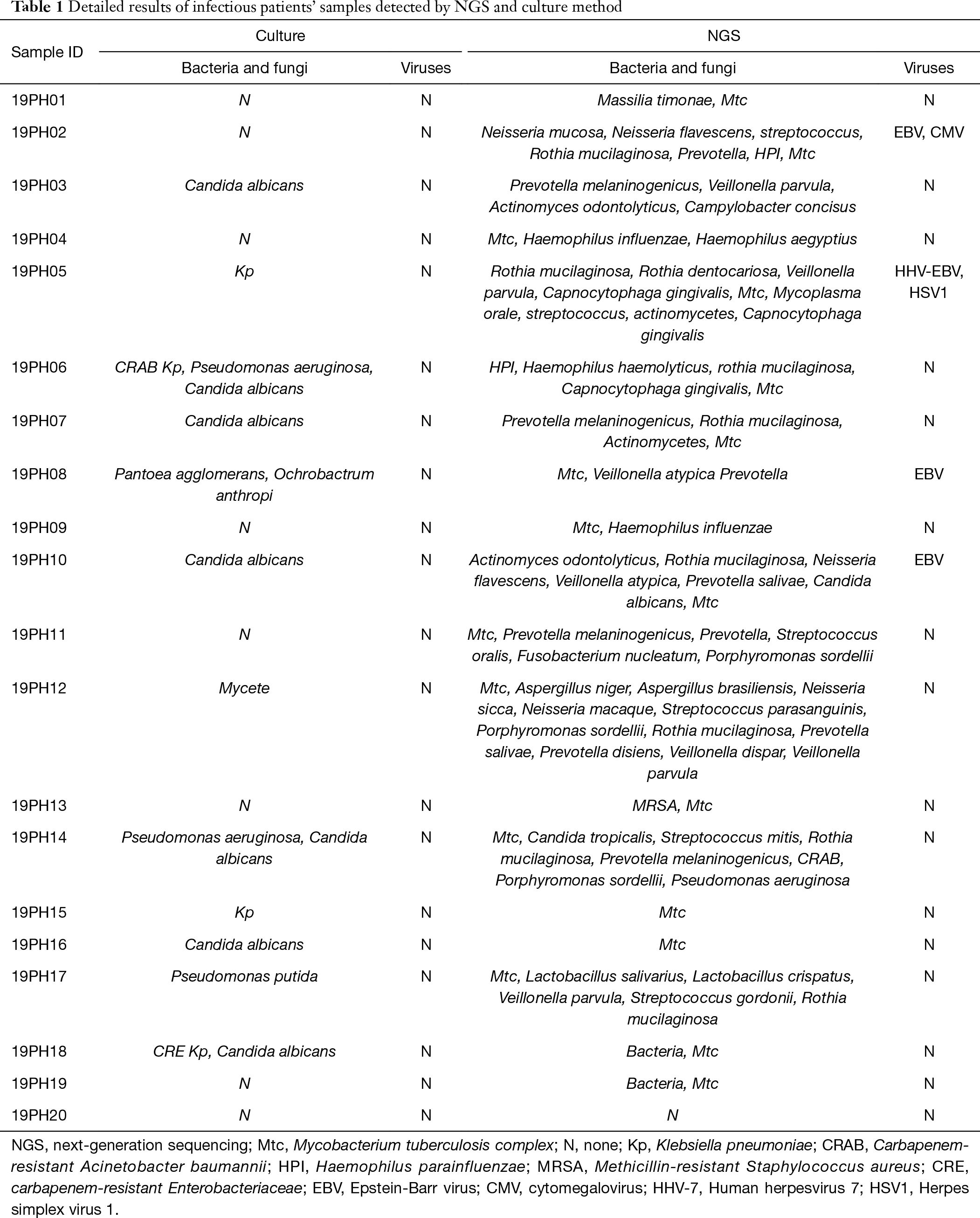 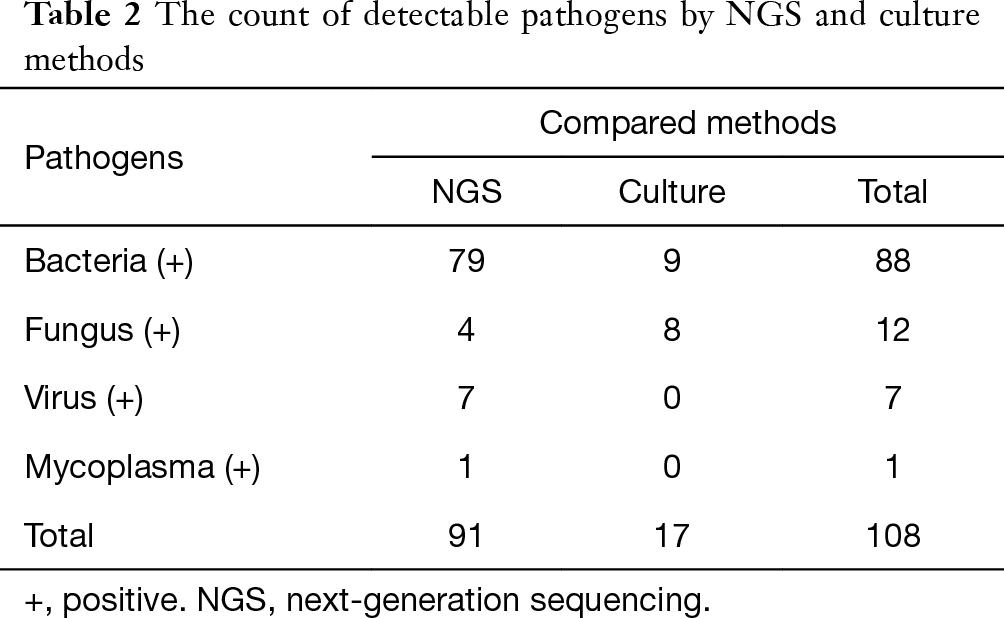 It is noteworthy that NGS technology has great advantages in the detection of viruses, and traditional culture method obviously fails to detect viral pathogens currently. For example, Sample 19PH02 was diagnosed with cytomegalovirus (CMV) and Epstein-Barr virus (EBV) infection by NGS.

According to Table 3, the detection rates of bacterial and fungal infections were 95.0% (19/20) by NGS, and 60.0% (12/20) by culture method. There was a significant difference between the results of NGS and traditional culture method by using McNemar’s χ2 test (P=0.008).

By comparison to traditional culture method, NGS technology has distinct advantages in the diagnosis of bacterial and fungal infections (P=0.008), which demonstrates its outstanding clinical application. What’s more, taking all types of pathogens (bacteria, fungi, viruses, mycoplasma and sporozoite) into consideration, the detectability of NGS was obviously higher than traditional culture method. According to the detective rate of parallel diagnostic test, NGS technology is suggested to combine with traditional culture method in the diagnosis of infectious patients. Hence, NGS technology can make great contributions to the process of precision medicine in infectious patients for its capacity to precisely and rapidly screen for multiple gene targets closely related to the pathogens as well as the development of drug resistance.

However, there is an urgent need to develop NGS technology so that it can be widely and fully suitable for clinical treatment and control. To start with, with regard to the software as well as hardware in NGS, there are still several problems can be improved, such as the development of the immature bioinformatics software, the supplement of the primates’ reads, and the evolvement of automation. It is not only facilitating the accuracy of NGS, but also shorten the turnaround time and lower the cost, resulting in the better conformity to clinical application. In addition, it is worth further investigating and developing the standardization process to control contaminant, thus leading to the fully utilizing the power of NGS. The existence of DNA contaminants in laboratory reagents and centrifuge tubes interferes the accuracy and analysis of NGS data (10,11). Multiple and easily influenced steps in NGS are main reasons for the widespread presence of these trace contaminants. The pollution of DNA may contribute to the differential outcomes between NGS and culture method as well.

The failure to distinguish the living or dead pathogens is the huge limitation of NGS technology that needs to be taken into consideration and solved imminently. Owing to this reason, NGS, as a semiquantitative technology, is unable to clearly prove the relationship between pathogens and the disease progression, thus affecting the judgement of clinical treatment efficacy. Taking all these factors into account, it is hopeful that the detective rate and the practicability of NGS could be improved through the unremitting efforts of scientists.

The reasons of the differently diagnostic results in the same infectious patients between NGS and culture method cannot be neglected. The empirical and effective treatment of antibiotics may lead to the death of specific pathogens, thus resulting in the positive outcome in NGS while the negative outcome in traditional culture method. The body normal flora in different parts of the human body is considered as another principal cause.

Our study also had some limitations. First, our study was retrospective study. Second, the sample size was small. Further study is needed to compare the detective rate between NGS and culture method.

In conclusion, as an emerging diagnostic technology, NGS shows outstanding advantages in the diagnosis of bacterial and fungal infections, and optimizes the treatment of infectious diseases. Regardless of its multiple and unresolved limitations, the clinical application and future development NGS technology is worthy of expectation.

Conflicts of Interest: All authors have completed the ICMJE uniform disclosure form (available at http://dx.doi.org/10.21037/jtd-20-930). The authors have no conflicts of interest to declare.

Ethical Statement: The authors are accountable for all aspects of the work in ensuring that questions related to the accuracy or integrity of any part of the work are appropriately investigated and resolved. The trial was conducted in accordance with the Declaration of Helsinki (as revised in 2013). The study was approved by Shanghai Pulmonary Hospital and informed consent was taken from all the patients (ethical number K19-158).