Bronchiolitis obliterans syndrome (BOS) is a clinical diagnosis for the phenomenon of progressive airway obstruction after allogeneic hematopoietic stem cell transplant (HSCT) (1). BOS is characterized by progressive circumferential fibrosis and ultimate cicatrization of the small terminal airways that causes progressive dyspnea and a nonproductive cough and decreased pulmonary function characterized by an obstructive airflow pattern (2,3). Although BOS is a rare disease, probably due to challenges when making the diagnosis, its incidence is underestimated. In recent publications from Brazil (4) and Japan (5), the cumulative incidence of BOS in HSCT patients was reported to be 2.9% in 1 year, 3.7% in 3 years, and 3.43% in 5 years. The reported incidence of BOS varies among studies from 3% to 30% (6-10). In our experience, its incidence in patients who have undergone HSCT is 4.2% (11). BOS is very important to patients who have undergone HSCT because mortality and morbidity are extremely high. In a recent study of patients from 2002 to 2009, the overall survival of BOS patients was less than 55% (11). Furthermore, in another study, the 5-year survival rate of 47 HSCT recipients was 40% in those without BOS but 10% in those with it (8). Recent study has shown that the presence of BOS was associated with increased non-relapse mortality similar to patients with moderate-to-severe graft-versus-host disease (GVHD) but had no impact on overall survival (12). These studies show that the treatment and management of BOS in HSCT patients are important and that early detection and treatment result in better patient outcomes.

Post-HSCT patients with respiratory symptoms or a decline in pulmonary function were referred to the Pulmonology Department of the BMT Center at Seoul St. Mary’s Hospital, Seoul, South Korea. After a clinical diagnosis of BOS, one experienced pulmonologist (Rhee CK) treated all patients according to the same protocol and follow-up evaluation. There was a change in the protocol in March 2015, and the dose of budesonide/formoterol was increased from 160/4.5 to 320/9 µg twice a day in patients with BOS. After a retrospective chart review, patients who were initially treated with budesonide/formoterol 160/4.5 µg bid and increased their dose to 320/9 µg bid between March 2009 and February 2019 were enrolled.

The inclusion criteria were chronic GVHD in other organs and positive diagnostic pulmonary function tests (PFTs) using the modified NIH criteria (19) and treatment with budesonide/formoterol 160/4.5 µg bid and an increased dose to 320/9 µg bid for at least 3 months. The exclusion criteria were other pulmonary or infectious diseases, such as asthma, lung cancer, COPD, pneumonia, or tuberculosis-destroyed lungs, and a history of using other inhalers.

This study was conducted in accordance with the Declaration of Helsinki (as revised in 2013). This study was approved by the institutional ethic committee/review board of Seoul St. Mary’s Hospital, which waived the requirement for informed consent due to the retrospective nature of the study (IRB No. KC19RESI0661).

We followed the modified NIH criteria for diagnosing BOS (19): FEV1/forced vital capacity (FVC) <0.7; FEV1 <75% of predicted with ≥10% decline over <2 years; absence of infection in the respiratory tract; one of the two supporting features of BOS (evidence of air trapping by expiratory computed tomography, or evidence of air trapping by PFTs); and residual volume (RV) >120% of predicted or RV/total lung capacity elevated outside the 90% confidence interval.

After diagnosing BOS, all patients enrolled were treated with 160 µg budesonide plus 4.5 µg of formoterol fumarate in a dry powder inhaler (Symbicort Turbuhaler; AstraZeneca, Molndal, Sweden) twice a day for at least 3 months and then were switched to 320 µg budesonide plus 9.0 µg formoterol fumarate twice a day. All patients were educated about the inhaler treatment. Montelukast and acetylcysteine were administered together.

PFTs were performed before HSCT for the baseline study and after HSCT for screening and diagnosing BOS and every 3–6 months. We compared pulmonary function before and after budesonide/formoterol 160/4.5 µg therapy and before and after increasing the dose of budesonide/formoterol. We compared the PFT data collected within the prior 12 weeks and that collected after 12 weeks from the day of raising the dose.

After 3 months of high-dose budesonide plus formoterol therapy and a clinical evaluation, the patients were categorized into two groups (responder or non-responder) according to therapeutic response: above or below the minimal clinically important difference (MCID) (20). The commonly accepted MCID for pulmonary function is an FEV1 of 100 mL and a CAT score of 2 points (21,22).

Safety was assessed as the incidence of pneumonia within 3 months after increasing the drug dose. Oral candidiasis, pharyngitis, pneumonia, and other adverse events were checked in the safety assessment.

Median and ranges are given for continuous variables. Categorical data are described as numbers and percentages (%). The t-test and paired t-test were performed to compare the PFT data and CAT scores. Categorical variables were compared using the chi-square or Fisher’s exact test. All statistical tests were two-sided, with P values ≤0.05 denoting significance. The statistical analyses were performed using SPSS 24 software (SPSS Inc., Chicago, IL, USA).

Of the 77 enrolled patients, 52 completed the CAT questionnaire before and after taking low-dose ICS/LABA (budesonide/formoterol 160/4.5 µg twice a day for 12 weeks). After treatment with low-dose ICS/LABA, there was significant decrease in total CAT score (P=0.001). Total CAT score decreased from 16.2 to 13.2 after low-dose budesonide/formoterol therapy. When comparing each question, scores for question 1 (cough), question 3 (chest tightness) and question 4 (breathlessness going up hills/stairs) decreased significantly (Table 4). Sixty-seven patients completed the CAT questionnaire before and after raising their budesonide/formoterol dose to 320/9.0 µg. After raising the dose of combination therapy, there were no significant differences in the total CAT score (Table 5). The total CAT score before treatment was 16.51; it was 16.41 after treatment. When comparing each question, there was no significant decrease in the score for each question.

Change in pulmonary function in the therapeutic response group 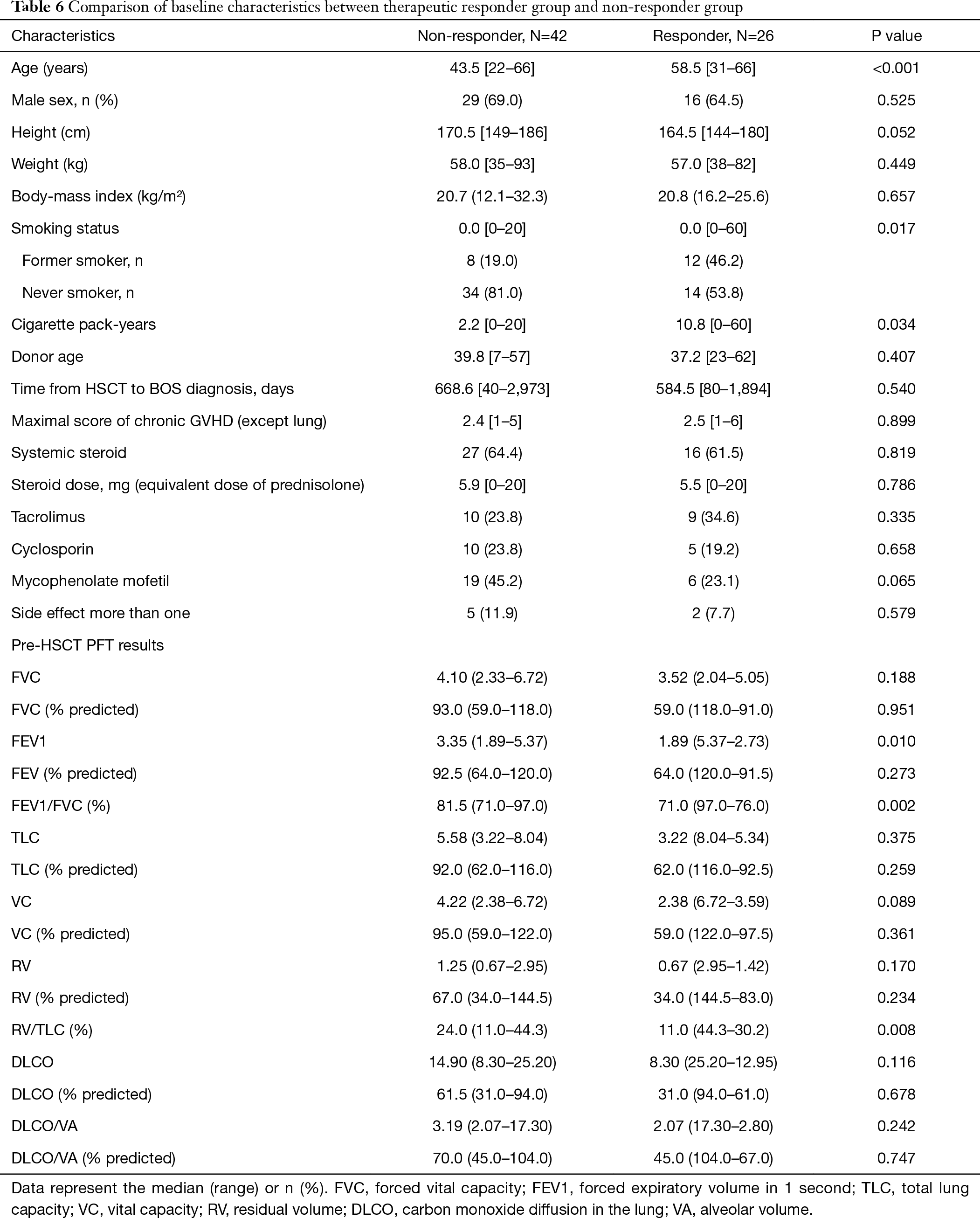 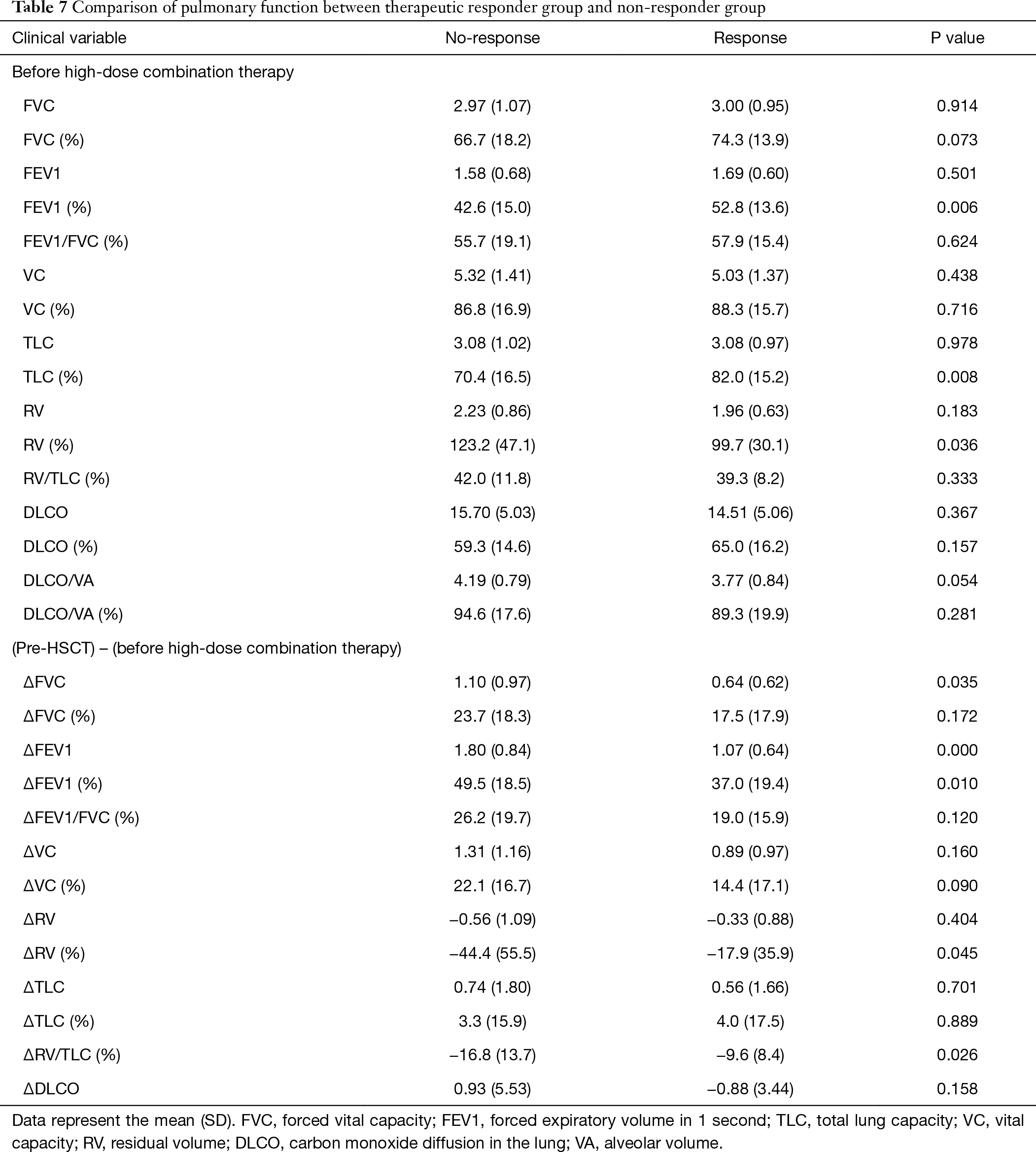 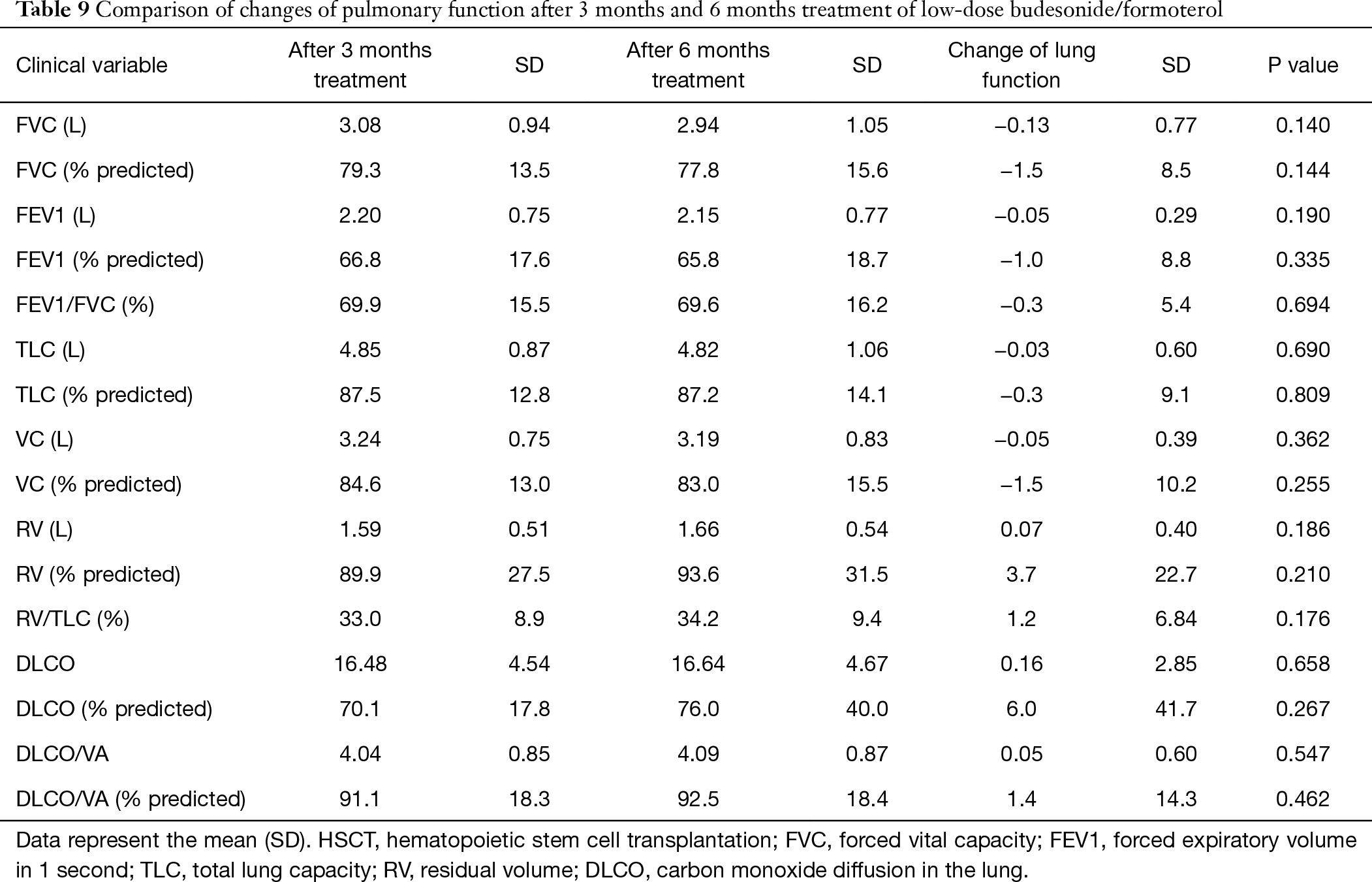 The therapeutic effect and safety of high-dose budesonide/formoterol were investigated in patients with BOS after allogeneic HSCT. We found no significant differences in FEV1 or CAT scores between the two periods of before and after increasing the dose of budesonide/formoterol. However, some patients (34.2% in FEV1 and 35.3% in CAT score) had significant improvements that met the MICD.

The main basis of BOS therapy remains as corticosteroids (23). However, if there is no response to steroid treatment and lung function continues to deteriorate, death will ensue. In a recent study, up to a 76% 2-year survival was reported (24), but more than 60% of patients with BOS after allogeneic HSCT progress to death (8).

BOS is a disease in which pulmonary function continues to decrease (2,24). After the treatment of high-dose budesonide/formoterol, the CAT score and the lung function did not deteriorate in our study. It is encouraging that some patients improved over the MCID. Future research is needed to identify the predictors of the response in patients with BOS. It will be important to distinguish the phenotypes of BOS that are responsive to treatment.

Our study had some limitations. It was not a randomized controlled study. We investigated the adverse events by retrospective chart review and there may have been under-detection of adverse events. Also, observation period for adverse events was relatively short. Finally, the responder may have had underlying reactive airway disease or early COPD before the onset of BOS. The onset of BOS may have exaggerated symptoms in some patients with potentially underlying pre-clinical COPD/asthma. The use of high-dose budesonide/formoterol may have resolved underlying pre-clinical COPD/asthma. However, there are several advantages to this study. The first was that medical care and management were standardized by a single expert using the same protocol. The second was that this is the first study to compare the effects of budesonide/formoterol 160/4 and 320/9 µg applied to patients with BOS in the real world. Finally, more than 70 patients with BOS, a very rare disease, were enrolled.

Ethical Statement: The authors are accountable for all aspects of the work in ensuring that questions related to the accuracy or integrity of any part of the work are appropriately investigated and resolved. The study was conducted in accordance with the Declaration of Helsinki (as revised in 2013). This study was approved by the institutional ethic committee/review board of Seoul St. Mary’s Hospital, which waived the requirement for informed consent due to the retrospective nature of the study (IRB No. KC19RESI0661).