Human adenoviruses (HAdV) are double-stranded, non-enveloped DNA viruses that are significant pathogens of the upper and lower respiratory tract (1). In non-immunocompromised hosts, respiratory tract infections caused by HAdV are usually accompanied by mild symptoms that resolve spontaneously. In immunocompromised patients such as organ transplant recipients, HAdV infection can be fatal (2,3). However, several studies have reported severe HAdV-related community-acquired outbreaks of pneumonia among immunocompetent patients (4,5). Such outbreaks have been reported in the military training camps of many countries (6-9). Previous studies on adenoviral pneumonia in Korean military personnel showed that the majority of patients were infected with HAdV type 55 (8-10). Of patients with pneumonia, a significant number exhibited rapid progression to acute respiratory distress syndrome (ARDS), and sometimes death (9,11,12).

To reduce fatalities among mostly young recruits, clinical characteristics and laboratory findings have been evaluated to predict unfavorable outcomes. Yoon et al. showed that initial monocytopenia was an independent predictor of rapid respiratory failure (9). The authors further considered that severe inflammation (including upregulated cytokine production) may have contributed to aberrant chemotaxis of monocytes and imbalanced production of inflammatory cells (9). However, little is known about the roles played by inflammatory cytokines in HAdV pneumonia. Wu et al. showed that HAdV infection initially induced the production of cytokines such as interleukin-6 (IL-6) and IL-8, and concurrent neutrophil recruitment. The initial inflammatory process was followed by the upregulation of chemokines that induced the synthesis of macrophage inflammatory proteins and γ-interferon-inducible protein-10, triggering monocyte infiltration (13). Several studies have indicated that severe HAdV infection was associated with marked imbalances in inflammatory cells and the cytokines IL-1ra, IL-6, IL-8, tumor necrosis factor-α (TNF-α) and γ-interferon (IFN-γ) (14-16). One study evaluating HAdV-55 patients in Chinese military camps found that IFN-γ, IL-4, IL-10, and IFN-α2 levels were higher in pneumonia patients than those with upper respiratory tract infections (17).

This was a prospective observational study. Consecutive patients with pneumonia admitted to the Armed Forces Capital Hospital (AFCH) between September 2017 and August 2018 were enrolled. The inclusion criteria were: (I) confirmed pneumonia and aged older than 18 years; (II) provision of informed consent; and, (III) fever >37.6 °C at initial presentation (23). The exclusion criteria were: (I) significant possibility of pulmonary tuberculosis at initial presentation; and (II) lung inflammation that was not attributable to a bacterial or viral infection (such as acute eosinophilic pneumonia). After pneumonia was confirmed radiologically by both pulmonologists and radiologists, blood and sputum samples were acquired with patient consent. Blood samples were obtained on either day 1 or 2 of admission. Serum samples were stored at −70 °C before subsequent analyses. Sputum samples were acquired at admission and were analyzed for the pathogen causative of pneumonia. Initial clinical symptoms including cough, dyspnea, chest pain, and significant fever [body temperature (BT) ≥38.3 °C] (8) were compared between those with HAdV and non-HAdV pneumonia, and hypoxemic and non-hypoxemic pneumonia. Hospital days, total days of fever (BT ≥38.3 °C at least once during the day) (8), total days of oxygen supply, oxygen saturation levels, and laboratory data were also compared.

All patients were military personnel on active duty in the Korean army; most were conscripts aged 19–26 years; all were diagnosed with pneumonia based on the presenting symptoms and radiological findings. Our study center (AFCH) is an 874-bed, tertiary military referral hospital; we admit not only patients with mild-to-moderate pneumonia but also those with severe pneumonia transferred from other military hospitals in Korea.

Patients with acute fever (>37.6 °C) (23), cough, sputum, and lung parenchymal consolidations evident on chest imaging were diagnosed with pneumonia; the chest X-ray and computed tomographic (CT) findings were confirmed by both pulmonologists and radiologists. All patients underwent chest CT and chest X-ray. Of all patients, those positive for HAdV on the initial sputum polymerase chain reaction (PCR) test were diagnosed with adenoviral pneumonia and all others with non-adenoviral pneumonia.

To prevent an outbreak amongst the conscripts and unscreened ARDS cases, our center (AFCH) have extended indications for hospitalization and ICU admission for pneumonia patients. Pneumonia patients with (I) high fever (BT ≥38.3 °C) lasting more than 3 days, (II) fever unresponsive to antipyretics lasting more than 3 days, or (III) rapid aggravation of radiologic findings were to be hospitalized. Pneumonia patients requiring high oxygen supply or impending ARDS cases were admitted to ICU. The ICU cases requiring prolonged mechanical ventilation or extracorporeal membrane oxygenation were transferred to other university hospitals with larger ICU facilities.

The study was conducted in accordance with the Declaration of Helsinki (as revised in 2013). This study was reviewed and approved by the institutional review board of the Armed Forces Capital Hospital (AFMC IRB-2017-03-02). All patients gave their written, informed consent to participate in the study. All patients consented to blood and sputum sampling.

All analyses were performed using Statistical Package for Social Sciences software program version 20.0 (SPSS Inc., Chicago, IL, USA). Distribution of continuous variables was tested using the Shapiro-Wilk normality test. Continuous parameters were compared using the Mann-Whitney U test, and categorical variables using the chi-squared test. The initial serum cytokine concentrations were compared using the Mann-Whitney U test. Possible associations between hypoxemia and other parameters assessed by logistic regression analysis. Continuous variables including BT, lymphocyte count, monocyte count, and platelet count were converted to categorical variables based on the previous publication (9). While there were no established cutoffs for the cytokine concentration levels, cytokines were entered in the logistic regression as continuous variables, and odds ratio was calculated for a one-unit increase (24,25). Factors that were significant on univariate analysis were subjected to multivariate analysis. Correlations between the variables were analyzed with the Spearman correlation coefficient. A P value <0.05 was considered to reflect statistical significance.

Comparisons between patients with adenoviral and non-adenoviral pneumonia

During the study period, 208 patients with pneumonia were admitted, and 86 met our inclusion criteria. Of these, 12 were excluded because their samples were of poor quality (e.g., blood samples exhibited hemolysis). After radiological confirmation of pneumonia, we finally evaluated 74 patients. The patient selection process was shown in Figure 1. Table 1 lists their baseline clinical characteristics and laboratory data. Of the 74 patients, 43 tested positive for HAdV on initial virus PCR of their respiratory specimens, and 31 patients tested negative. Table 2 shows the results of respiratory virus PCR testing and the atypical pathogens found in both groups. The adenovirus genotype of 43 pneumonia patients was HAdV-55. In the non-adenovirus group, there were 5 cases of rhinovirus, 1 case of coronavirus 220E, 2 cases of RSV-B, 4 cases of influenza A and 2 cases of influenza B. Furthermore, 3 patients were positive for streptococcus pneumoniae antigen. 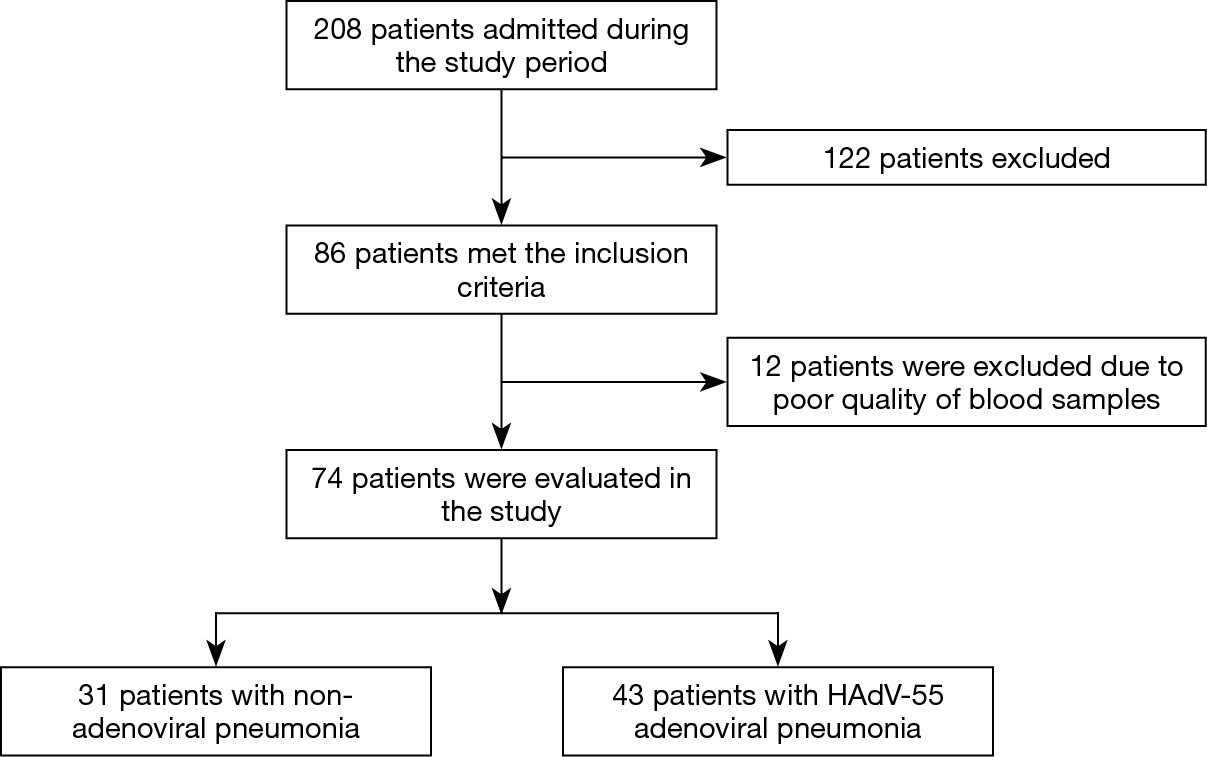 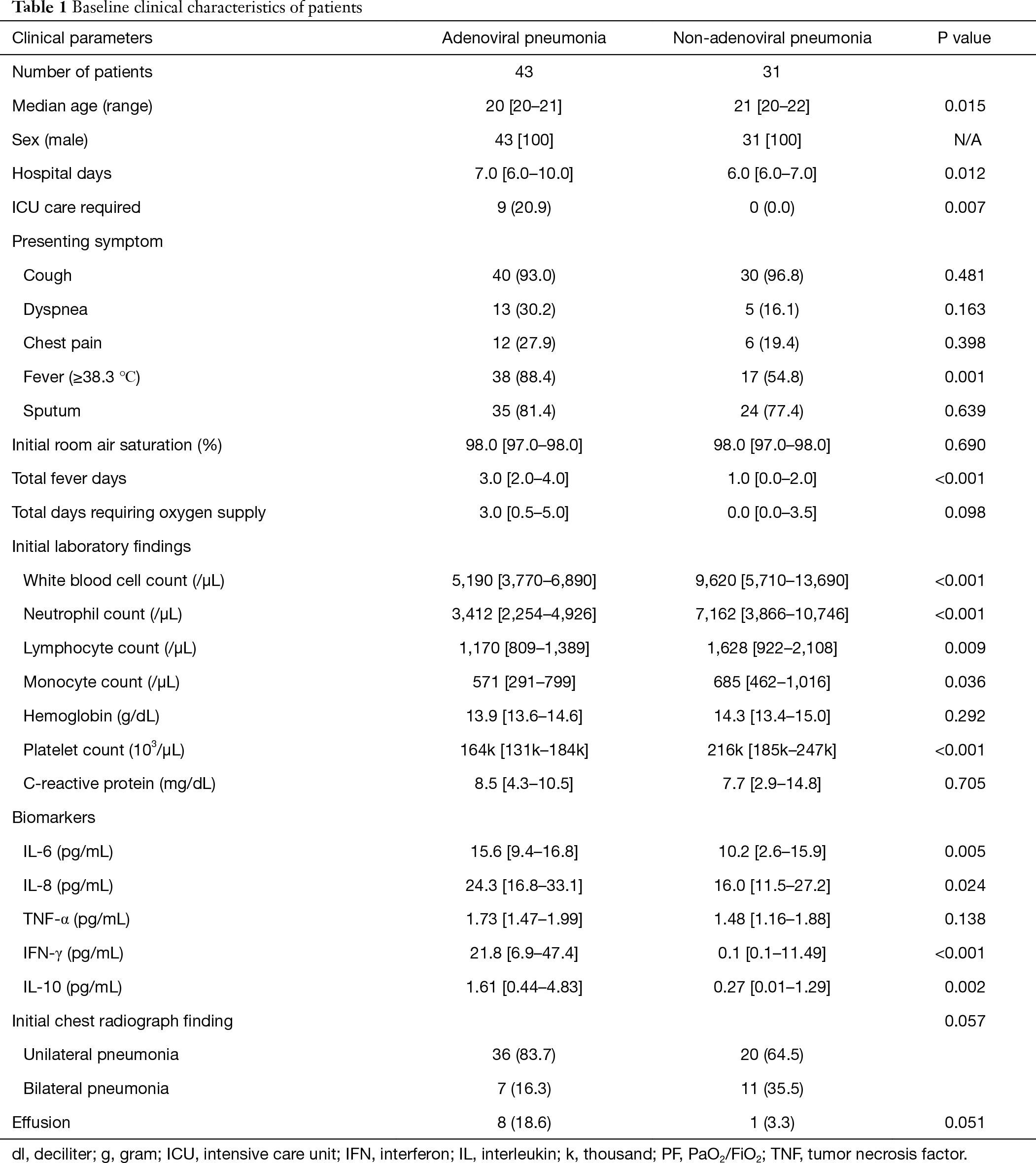 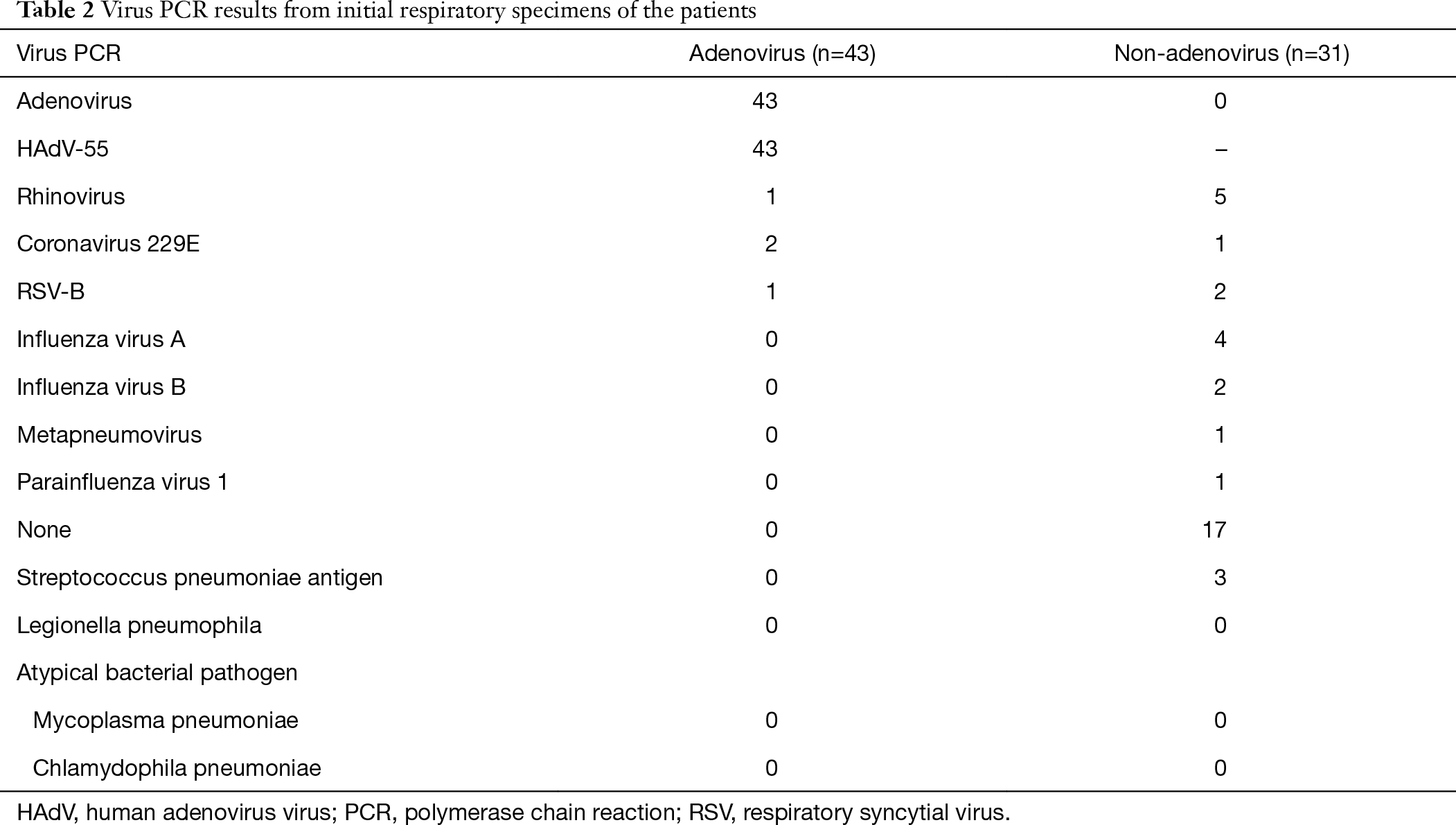 Comparisons between the hypoxemic and non-hypoxemic groups 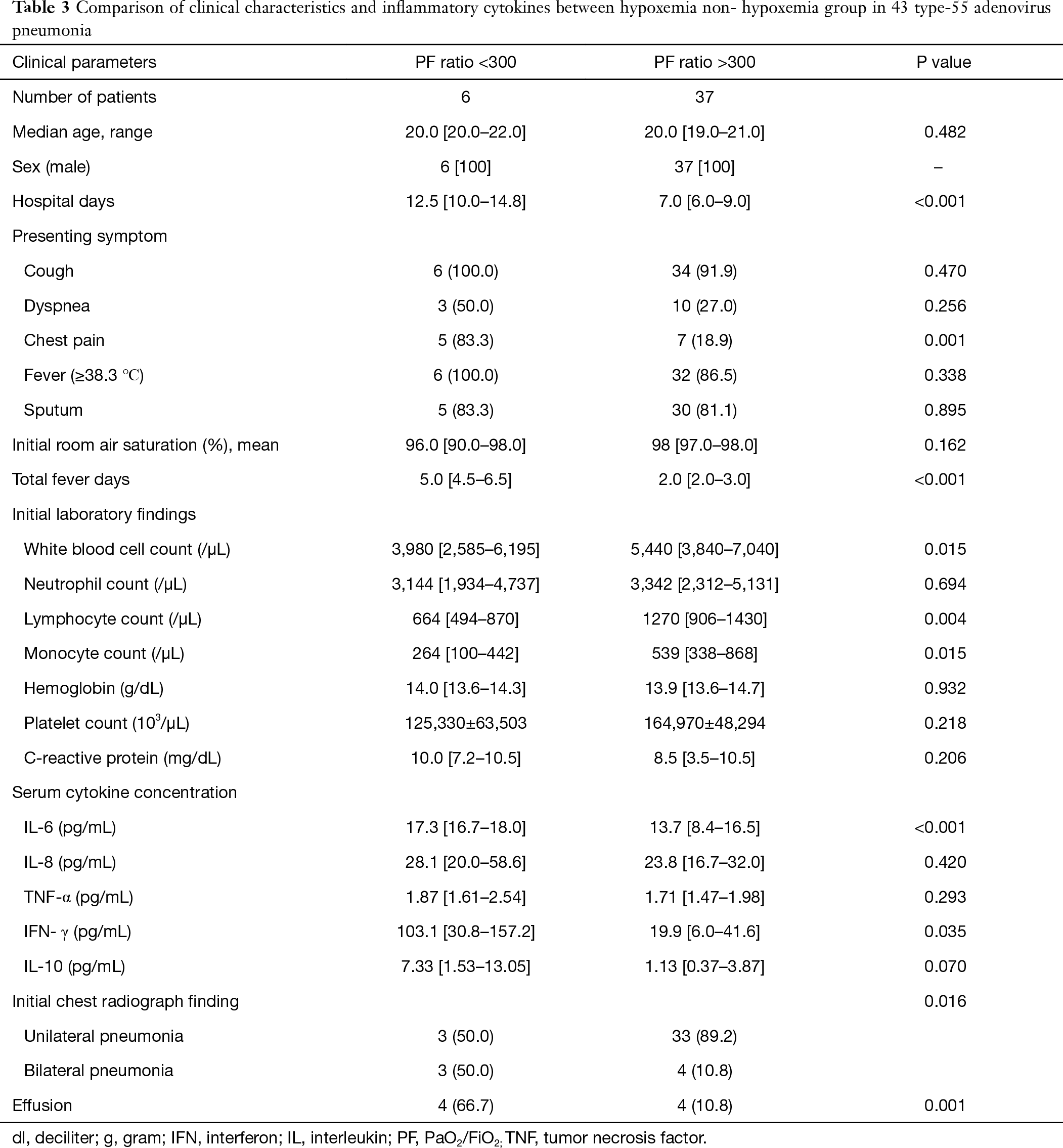 Association with hypoxemia in patients with HAdV pneumonia 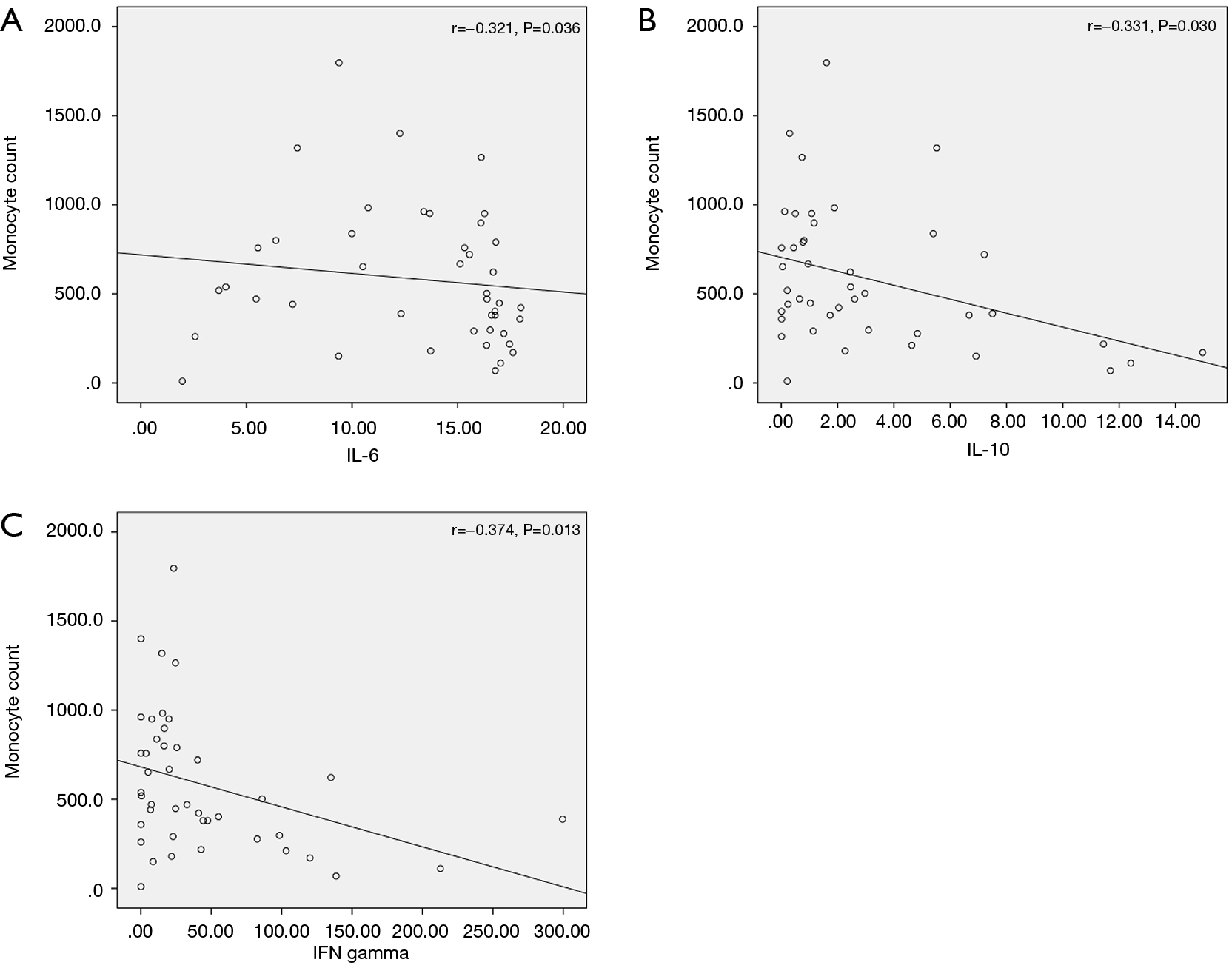 Compared to non-adenoviral pneumonia, our results showed that patients with HAdV-55 pneumonia had a prolonged hospital stay and fever, while showing more frequent abnormal laboratory findings. In the previous studies on HAdV pneumonia among Korean military personnel, respiratory failure occurred in a considerable number of patients (26,27). In the present study, the adenoviral group also showed increased concentrations of IL-6, IL-8, IL-10, and IFN-γ, suggesting more active cytokine-mediated inflammations than in non-adenoviral pneumonia. Wu et al. showed that the levels of IL-6 and IL-8 increased markedly after adenovirus-7 infection (13), and this may also be true of HAdV-55 infection.

The clinical features and laboratory findings showed contrasting differences even among the HAdV pneumonia group, after they were grouped according to the presence of hypoxemia. The hypoxemic HAdV pneumonia patients were hospitalized longer and had more prolonged fever than the less severe group. Our results showed also showed that monocyte count was significantly lower in the hypoxemic group, and this was consistent with the previous study in which monocytopenia was an independent predictor for respiratory failure (9).

In the 43 HAdV-55 group, IL-6, IL-8, and IFN-γ showed significant associations with hypoxemia. Moreover, IL-6 and IFN-γ showed significant descending linear correlations with the PF ratio, while IL-8 showed a significant correlation with total fever days. In a previous study, IL-6 was shown to play a significant role in susceptibility to pneumonia (21). Furthermore, an elevated IL-6 was reported to have associations with severe pneumonia and ARDS (16,28). In the case of IL-10, a study on elderly patients with community-acquired pneumonia demonstrated that high IL-10 levels were shown to predict 30-day mortality (29), and IL-10 levels were also related to CURB-65 scores in pneumonia (30).

IFN-γ was another cytokine that showed association with hypoxemia in our study. IFN- γ plays an important role in inflammation and immune reaction in infection (31), and is produced by the immune cells, including natural killer cells, T lymphocytes, and macrophages (32,33). In the study comparing viral and pneumococcal pneumonia, IFN-γ was significantly elevated in viral community-acquired pneumonia (24). Increased level of IFN-γ was predictive of more frequent extrapulmonary complications in the study of pediatric mycoplasma pneumonia (34). We assume that the upregulation of cytokine productions would result in more active inflammations in lung parenchyme and eventually, hypoxemia.

Monocyte and lymphocyte counts were significantly decreased in the hypoxemic group when compared to the non-hypoxemic group. In the previous study on HAdV pneumonia, monocytopenia was an independent predictor for respiratory failure (9). Our correlation analysis showed that IL-6, IL-10, and IFN-γ showed significant correlations with monocyte level, suggesting the possibility of inflammatory cytokines’ contribution to an imbalance of inflammatory cells. The study on HAdV infection by Chen et al., showed that lymphocyte and monocyte counts, and inflammatory cytokines concentrations showed significant differences between a pneumonia group and a relatively milder upper respiratory infection group (17), suggesting possible interrelations between immune cells, inflammatory cytokines and disease severity. The exact mechanism underlying the interrelationship between immune cells and cytokines in HAdV infection is not exactly known and needs further studies.

Our study had several limitations. First, it used a single-center prospective design and included a relatively small number of patients. The study patients were consecutively enrolled, but we believe that the analyses performed using this group should be reconfirmed in future studies including a larger population of adenoviral pneumonia. Second, we evaluated only male military personnel; our findings may not be generalizable to other populations. However, HAdV pneumonia is prevalent in military training camps

We found that the levels IL-6, IL-10, and IFN-γ were significantly associated with hypoxemia in patients with HAdV-55 pneumonia. A future study involving serial measurements of inflammatory cytokine levels is required to understand an association between acute inflammation and the prognosis of adenoviral pneumonia.

Funding: This work was supported by the Korean Military Medical Research Project funded by the Republic of Korea Ministry of National Defense (ROK-MND-2017-KMMRP-031).

Conflicts of Interest: All authors have completed the ICMJE uniform disclosure form (available at http://dx.doi.org/10.21037/jtd-19-4067). CKR serves as an unpaid editorial board member of Journal of Thoracic Disease. The authors have no conflicts of interest to declare.

Ethical Statement: The authors are accountable for all aspects of the work in ensuring that questions related to the accuracy or integrity of any part of the work are appropriately investigated and resolved. The study was conducted in accordance with the Declaration of Helsinki (as revised in 2013). This study was reviewed and approved by the institutional review board of the Armed Forces Capital Hospital (AFMC IRB-2017-03-02). All patients gave their written, informed consent to participate in the study.