The number of patients in whom an incidental pulmonary tumour is detected before cardiovascular surgery is increasing with the progress in chest CT scanning. It’s also common to find patients with incidental asymptomatic cardiac disease detected before thoracic surgery for a pulmonary nodule. These circumstances present a great challenge for surgeons. However, the standard surgical strategy for these patients remains unclear (1). Some institutions conduct a staged surgical procedure in which cardiac surgery is mostly performed first, followed by lung surgery. Potential problems with this approach include delay in the lung resection, due to the postoperative recovery phase, and the additional cost of two separate operations. However, the open approach for a concomitant procedure also has its shortcomings, such as the risk of dissemination due to manipulation of the pulmonary lobe, mechanical stress on the cardiac chambers, more difficult radical lymph node dissection, and the risk of increasing the amount of blood loss due to heparinization (2). A minimally invasive approach for resection of early-stage lung cancers has been described and many favourable results validated (3). There is increased interest in pursuing a robotic approach as early experience indicates some potential advantages (4). On the other hand, robotic cardiac surgery arises from an interest in reducing patient trauma by using a small incision with videothoracoscopic assistance (5). Currently, the da Vinci surgical system is the only device approved for cardiac surgery.

We report the case of a patient, aged 73, with hypertension, duodenal ulcer, thyroidectomy 40 years ago and appendectomy at a young age. During pre-operative assessment for the surgical treatment of a positron emission tomography (PET)-positive lesion in the right upper pulmonary lobe, the patient performed echocardiography with evidence of severe mitral insufficiency. In our centre, in these cases, whenever possible, we prefer to intervene simultaneously during the same operative session, usually with an open approach. In this case we chose a minimally invasive robotic assisted surgical treatment for the pulmonary lesion. By maintaining this indication, we agreed with the cardiac surgeons a totally robotic approach for both cardiac and pulmonary procedures. We therefore describe our strategy. Written informed consent was obtained from the patient for publication of this study and any accompanying images. A copy of the written consent is available for review by the Editor-in-Chief of this journal.

For the cardiac approach the patient was positioned supine with the body at the left edge of the bed, and the right side was elevated slightly with a gel pad and the right arm was allowed to hang down and secured on an arm board to expose the axilla. The robot came from the left side of the patient’s bed in a standard fashion. Venus drainage was provided via the right femoral vein and a retrograde arterial inflow was established via the right common femoral artery. A service minithoracotomy (3 cm) was made in the anterior axillary line at the fourth intercostal space (ICS). Robotic arm trocars were placed in the third and fifth ICS, on the anterior and the middle axillary line respectively, to insert the mitral retractor and robotic instruments. 3D camera was inserted in the ninth ICS. Pericardial entry and suture retraction were established (Figure 1) and cardiopulmonary bypass (CPB) started. Antegrade cardioplegia-vent was placed in the ascending aorta (Figure 2). A trans thoracic aortic clamp was passed through the chest wall at the third ICS in the anterior axillary line and positioned around the aorta through the transverse sinus. A suction vent was passed into the left atrium through right superior pulmonary vein. After aortic clamping and cardiac arrest (Figure 3), left atriotomy was made and the mitral valve was exposed. A triangular posterior leaflet resection and annuloplasty were performed using Cor-Knot suture fasteners (Figures 4,5). After atrial closure, cardiac de-airing was made and CPB stopped. The mean myocardial ischemia and CPB time have been 80 and 122 minutes respectively. Intraoperative post-repair echocardiography confirmed that the patient had a minimal residual mitral regurgitation. 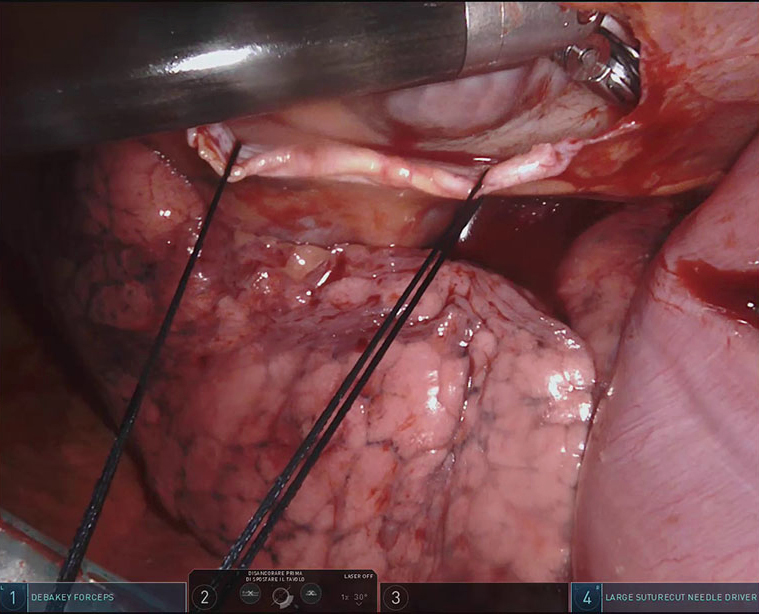 Figure 1 Two stay sutures are placed on the pericardium for exposure. 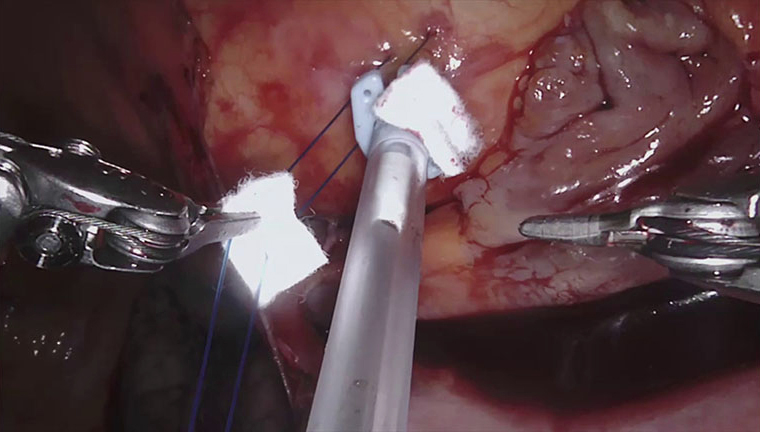 Figure 2 Antegrade cardioplegia-vent was placed in the ascending aorta. 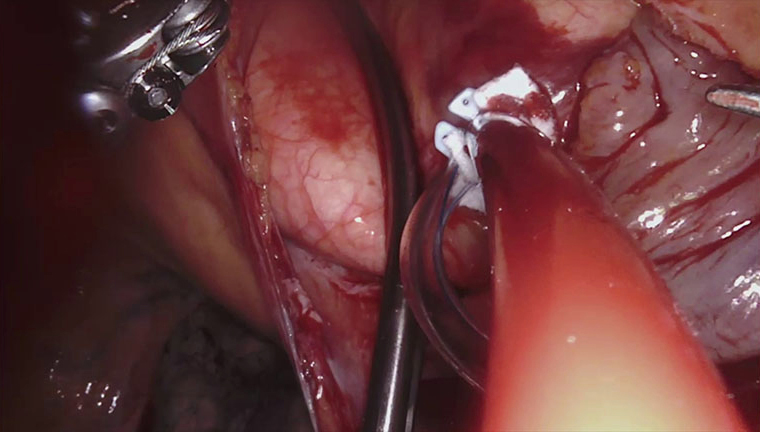 Figure 3 Clamping the aorta. The clamp was introduced through the third ICS in the anterior axillary line. 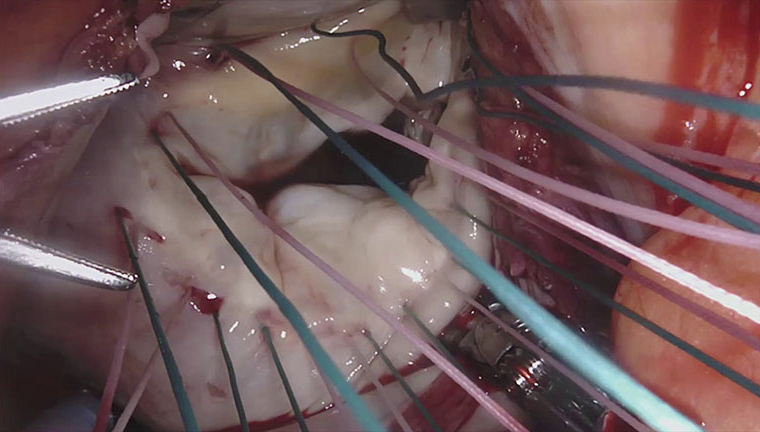 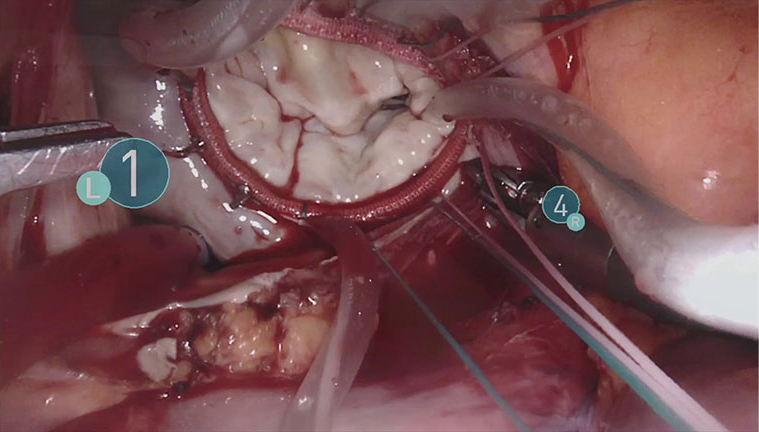 Figure 5 Mitral valve after plasty. We can see some residual sutures before the use of Cor-Knot fasteners.

Then, we removed robot arms and we put the patient in full left lateral decubitus for the thoracic time and we docked again the robot from the same side as before. We used the same service minithoracotomy and the same camera port. We added two working ports in the ninth ICS, at the middle and posterior axillary line while the other two working ports were closed in a standard manner. The inferior pulmonary ligament is dissected with a harmonic device. All nodes at station 9 are harvested. We then continue superiorly with the posterior hilar dissection, defining the crotch between the right upper lobe bronchus and bronchus intermedius. All level 7 nodes are dissected. The superior pulmonary vein excluding the middle lobe vein is dissected and stapled with the robotic stapler entering the chest from the posterior port (Figure 6). Next, the Boyden trunk is exposed and all level 10R nodes are removed before any passage of instruments is performed behind the pulmonary artery. Once all nodes are removed from the Boyden trunk, a robotic stapler is then passed from usually the posterior port (Figure 7). Then, we closed the ascending artery branch through the use of Hem-O-Lok® (Figure 8). The last structure to be dissected is the right upper lobe bronchus which is then stapled (Figure 9). We used an Endobag® to remove the specimen (Figure 10). This is inserted from the service minithoracotomy and the specimen is placed into the bag using instruments in the remaining two ports. Additional mediastinal and hilar nodes were harvested, especially from levels 2R, 4R and 7. We then checked for air leak and ensured haemostasis. 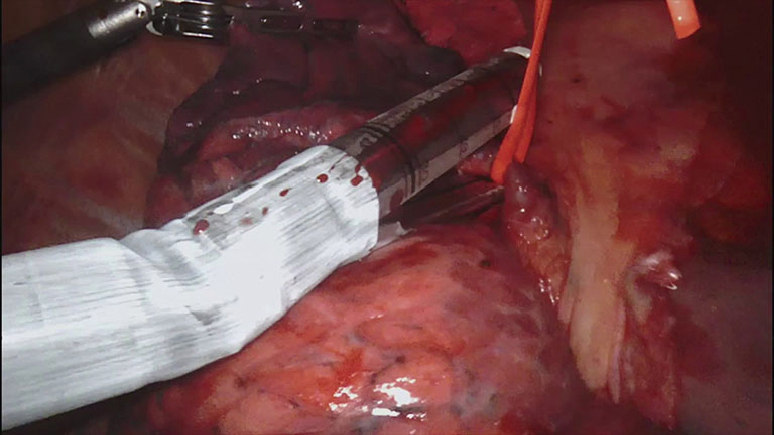 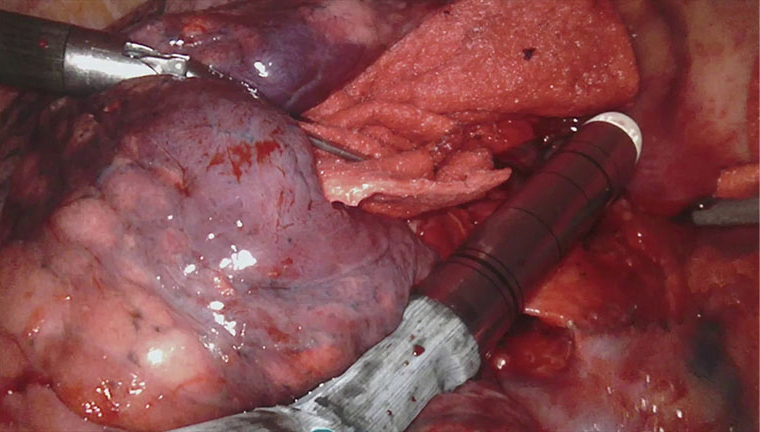 Figure 8 Ascending branch of pulmonary artery is closed with two Hem-O-Lok® and then sectioned with harmonic device. 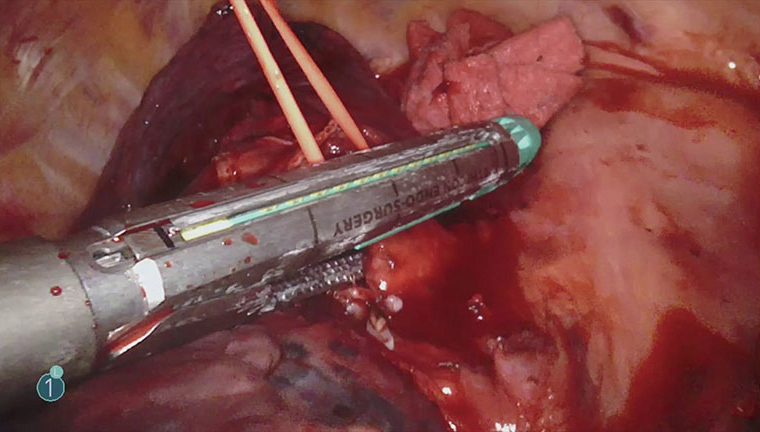 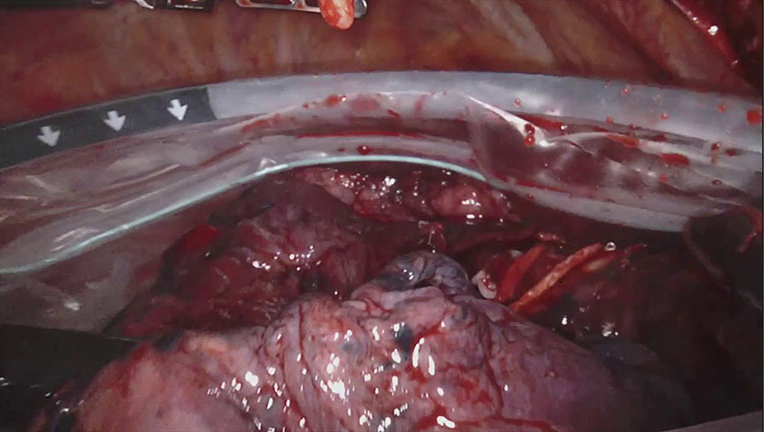 The two approaches differed only for two additional working ports (third ICS on the anterior axillary line and fifth ICS on the middle axillary line for cardiac procedure vs. ninth ICS on the middle and posterior axillary line for thoracic procedure) while we shared the same service minithoracotomy and the same camera port for both operations. So, we performed two major cardiothoracic procedures in a single time with a single anaesthesia through a 3-cm minithoracotomy and 5 additional 1-cm working ports reducing the common problems associated with the standard open approach (especially pain). In addition, performing the two operations separately would result, first of all, in a long latency period between the two; secondly, considering the eventual mini-invasive cardiac approach for mitral valve repair, it would have been probably impossible to access the right hemithorax with videothoracoscopic approach due to the presence of adhesions. Some institutions conduct a staged surgical procedure in which the cardiac surgery is mostly performed first, followed by lung surgery after a variable timing strictly related to patient recovery. Potential oncological problems with this approach are the delay of radical tumor resection due to the postoperative recovery and the oncological impact of extracorporeal circulation in terms of immunosuppression, production of pro-inflammatory factors and the risk of tumor cells spreading. In our case, performing a single stage procedure, we overcame the problem of the surgical delay. Some may object that even in our case CPB was done before tumor resection, but we must underline that our patient had a first stage small adenocarcinoma with no lymph nodes involved (T1bN0) and that the manipulation of the robotic approach lessen the risk of dissemination. To our knowledge, this is the first reported case in literature of a patient with lung cancer and mitral valve defect treated with a simultaneous fully robotic approach.

Conflicts of Interest: All authors have completed the ICMJE uniform disclosure form (available at http://dx.doi.org/10.21037/jtd-20-398). The authors have no conflicts of interest to declare.

Ethical Statement: The authors are accountable for all aspects of the work in ensuring that questions related to the accuracy or integrity of any part of the work are appropriately investigated and resolved. Written informed consent was obtained from the patient for publication of this study and any accompanying images. A copy of the written consent is available for review by the Editor-in-Chief of this journal.