Pleural changes in patients with pneumothoraces and Marfan syndrome

We present the following article in accordance with the STROBE reporting checklist (Available at http://dx.doi.org/10.21037/jtd-20-926).

Our retrospective chart review was approved by the ethics committee of the Tokyo Women’s Medical University (#4052). In this study, patients provided informed consent by having the option to opt-out of participation; the study complied with the standards established in the Declaration of Helsinki (as revised in 2013). The inclusion criteria limited participants to those who had undergone pneumothorax surgery at our facility, between January 1991 and December 2015, and who had been diagnosed with MFS according to the revised Ghent criteria. Patients were excluded if they did not undergo surgery and received only medical treatment, if tissue was obtained only by ligation and not by surgery, and if they did not consent to the study.

Patients who underwent multiple operations were classified according to their age at the time of the first operation at our institution; the pathological specimens were also obtained at that time.

Between January 1991 and December 2015, 966 operations underwent pneumothorax-related surgeries in our hospital, including 11 (8 men and 3 women) who met the revised Ghent diagnostic criteria for MFS (7). One patient had undergone 4 operations, and two patients had undergone 2 operations in our hospital. For two patients, resected specimens were not obtained because the patients underwent ligation or suturing surgeries; they were excluded from this study. Thus, the study group comprised 9 patients (6 men and 3 women); pulmonary bullae specimens, resected from these individuals, were examined histopathologically.

As shown in Table 1, the mean patient age at the time of the initial surgery was 24.6 years. Of the 9 patients, 7 (77.8%) had bilateral pneumothoraces and 4 (44.4%) had postoperative recurrent pneumothoraces at the surgical sites. Bullae were found in the apices of the upper lung lobes (a location similar to those associated with patients with PSPs) in all patients and in the superior segment (S6) of the lower lobe in 1 patient. Except for two patients, most patients were included following their first surgery on the affected side. The two patients who underwent their second surgeries also exhibited bullae at the apex of the lung, as in the other cases.

As shown in Table 2, 5 (55.6%) of the 9 patients demonstrated blood vessel wall thickening in or near the pulmonary cysts. In these blood vessels, the smooth muscle cell layers were disordered, and cystic medial degeneration was evident (Figure 1). The cystic medial degeneration resembled the characteristic findings of the aortas in patients with MFS. In 5 (55.6%) of the 9 patients, calcification was present in the cyst walls (Figure 2). Further, all patients demonstrated degenerated, fragmented, or missing elastic fibers in the EVG-stained lung cysts (Figure 3). 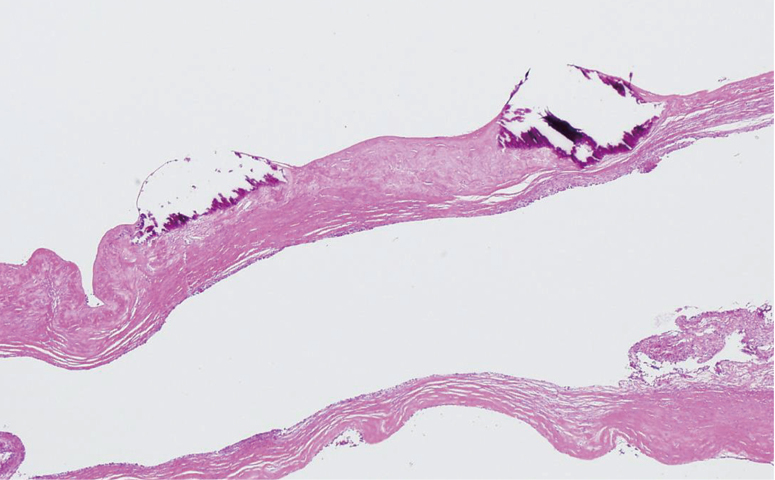 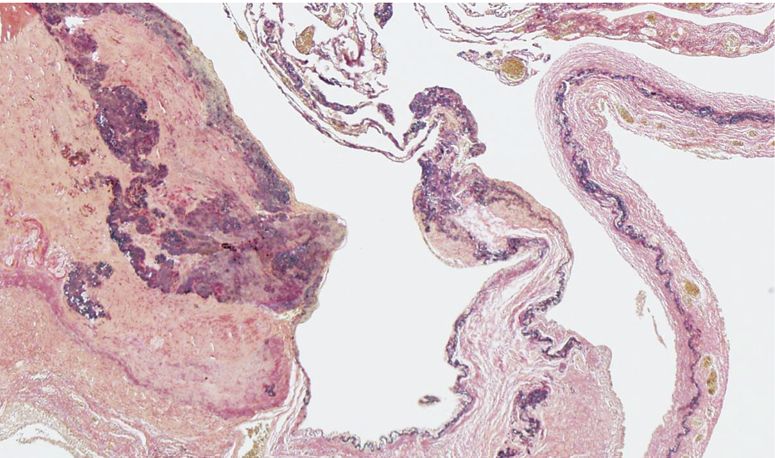 We thought that patients with pneumothoraces and MFS should have clinical features and pathological features associated with connective tissue abnormalities. However, confirmatory studies have not previously been possible because of the small number of patients. During this study, patients with MFS accounted for 1.66% of those who underwent pneumothorax-related surgeries in our hospital. This high percentage may be related to the fact that we have treated the cardiovascular abnormalities of many patients with MFS at our hospital.

Elastic fibers are produced during the early neonatal period and are usually produced rarely, thereafter. Elastin, a major component of medial elastic fibers, levels decrease with age (18). Although our patients were young (mean age, 24.6 years), their elastic fibers were degenerated, fragmented, or had entirely disappeared. In patients with MFS, the alveolar elastic fibers are reportedly irregularly thickened, twisted, fragmented, and blocked (19). In our patients, similar degenerative changes were also observed. In patients with MFS, characteristic changes, e.g., the fragmentation of elastin fibers and the disruption of their arrangement in the aorta, decreased numbers of smooth muscle cells, and deposition of collagen and glycosaminoglycans in the medial cells, are known as cystic medial degeneration. This alteration can be seen in elderly patients as well as in those with MFS (20-24). The fact that similar blood vessel wall changes were found in the resected lung specimens of our patients is noteworthy. The lungs are supplied by the pulmonary and bronchial arteries, whereas the pleura is supplied only by the bronchial arteries (25). However, a conclusive determination of which arteries have been changed cannot be made.

Partial calcification of the lung bullae was seen in many of our patients. In the old Ghent criteria, mitral annulus calcification in patients <40 years old was included as a diagnostic factor (26); in the revised criteria, it was removed. There are also reports that elastin fragments cause aortic calcification in MFS (27). Generally, in many tissues, calcification occurs in the elderly. If fragmented elastic fibers cause calcification in young people with MFS, such elastic fibers are also present in lung bullae, which might be the reason lung bullae often calcify. Previous studies have not reported the pulmonary cyst changes, particularly the cystic medial degeneration, which were seen in our patients with MFS (28). These phenomena may be caused by degenerated elastic fibers as well as calcifications. The histopathological characteristics observed in the patients in the present study might present an opportunity for diagnosing patients with MFS in the absence of a family history of the disease.

There are some limitations associated with the current research. The study was a retrospective chart review, not limited to first surgeries, and included older specimens. In addition, we did not examine tissue differences between specimens collected during the first and subsequent operations. In the future, we would like to accumulate cases to compare patients with PSP and those with MFS; specimen differences between the first and subsequent surgeries would be analyzed.

Reporting Checklist: The authors have completed the STROBE reporting checklist. Available at http://dx.doi.org/10.21037/jtd-20-926

Conflicts of Interest: All authors have completed the ICMJE uniform disclosure form (available at http://dx.doi.org/10.21037/jtd-20-926). The authors have no conflicts of interest to declare.

Ethical Statement: The authors are accountable for all aspects of the work in ensuring that questions related to the accuracy or integrity of any part of the work are appropriately investigated and resolved. Our retrospective chart review was approved by the ethics committee of the Tokyo Women’s Medical University (#4052). In this study, patients provided informed consent by having the option to opt-out of participation; the study complied with the standards established in the Declaration of Helsinki (as revised in 2013).