The dynamic, chronological process of aging is characterized by the gradual accumulation of cell damage, progressive functional decline, and higher susceptibility and vulnerability to diseases (1). Elderly people are at increased risk of developing chronic diseases, including cancer, cardiovascular disease, hypertension, and diabetes mellitus.

With an estimated 2,093,876 new cases and 1,761,007 deaths in 2018, lung cancer is the most common and deadliest of any malignancy (2). Among elderly patients, the incidence and mortality of advanced lung cancer have been increasing (3). Previous studies have shown that the patient’s age at diagnosis plays an important role in the prognosis and treatment selection of lung cancer (4-6), prostate cancer (7,8), thyroid cancer (9), and lymphoma (10).

For patients with unresectable locally advanced non-small cell lung cancer (NSCLC), concurrent chemoradiotherapy (cCRT) followed by durvalumab can improve progression-free survival (PFS) [hazard ratio (HR) =0.52,95% confidence interval (CI): 0.42–0.65, P<0.001] and overall survival (OS) (HR =0.68, 95% CI: 0.53–0.87, P<0.001) compared with cCRT alone (11-13). However, cCRT carries the risk of developing radiation pneumonitis (RP). The sensitivity of lung to radiation remains the dose-limiting factor for radiotherapy for lung cancer. Severe RP is life threatening and RP also can delay or interrupt subsequent treatment and impact survival. In one study, a higher incidence of RP was shown in the Asian subgroup (14). It was important to evaluate the risk of RP and its relationship with age at diagnosis in Chinese population.

cCRT is still the important part of the multimodality therapy of PACIFIC pattern. Jeremic et al. (15) investigated the clinical prognostic factors in patients from Serbia with locally advanced NSCLC treated with chemoradiotherapy and the results showed only age did not influence OS and local PFS, whereas female gender, lower KPS, less pronounced weight loss, lower stage, squamous histology and treatment independently predicted better OS and local PFS. But the impact of age on survival in Chinese patients with unresectable locally advanced NSCLC receiving chemoradiotherapy was unknown. This study investigated the association of age with the survival outcomes and risk of RP in Chinese patients with unresectable locally advanced NSCLC receiving chemoradiotherapy from one institution. We present the following article in accordance with the STROBE reporting checklist (available at http://dx.doi.org/10.21037/jtd-20-2137).

The study was conducted in accordance with the Declaration of Helsinki (as revised in 2013). The study was approved by the Independent Ethics Committee of National Cancer Center/National Clinical Research Center for Cancer/Cancer Hospital, Chinese Academy of Medical Science and Peking Union Medical College (No. 20/179-2375). Because of the retrospective nature of the research, the requirement for informed consent was waived.

A Cox proportional hazards model with restricted cubic spline (RCS) was used to investigate the relationship between age and OS. The optimal cutoff age was defined by maximally selected rank statistics from the 'maxstat' R package, which is an outcome-oriented method that provides a cut-point value with the most significant statistical relation with the outcome (16). The differences between groups were analyzed with Student’s t-test and χ2 test. Survival rates were calculated using the Kaplan-Meier method, and the survival outcomes of the groups were compared by log-rank test. A P value of <0.05 was considered statistically significant. Multivariate Cox regression analysis was conducted to determine the prognostic factors for survival outcomes and to calculate the hazards ratios (HRs). Analyses were performed using R software (Version 3.6.2) (http://www.r-project.org/). R packages included survival, survminer, rms, and maxstat.

Optimal cutoff of age at diagnosis for OS 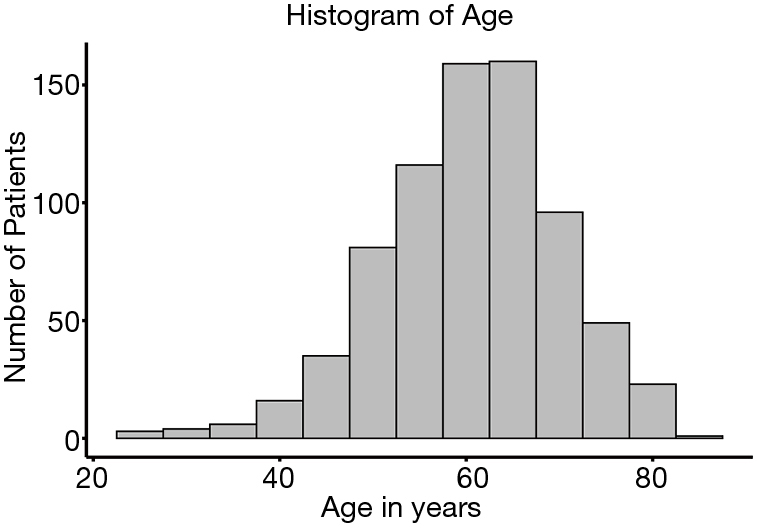 Figure 1 Histogram of age distribution. Age at diagnosis followed a normal distribution, and the median age of the patients was 61 years old (23–83 years old). 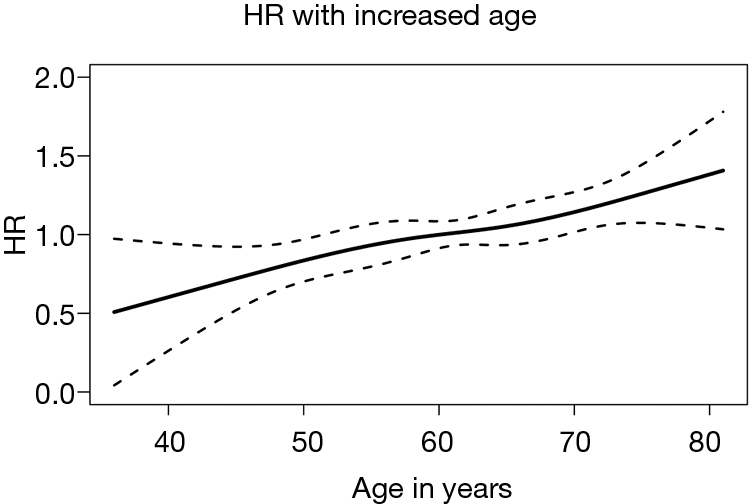 Figure 2 Hazard ratio of age on overall survival by restricted cubic spline. The estimated HR (solid line) with 95% CI (dotted line) for the association between age at diagnosis and OS in 675 patients, based on restricted cubic spline (RCS), was calculated using R package ‘survival’ and ‘rms’. The HR of patient age as a continuous variable was 1.18 (95% CI: 0.91–1.54, P<0.01). HR, hazard ratio; OS, overall survival. 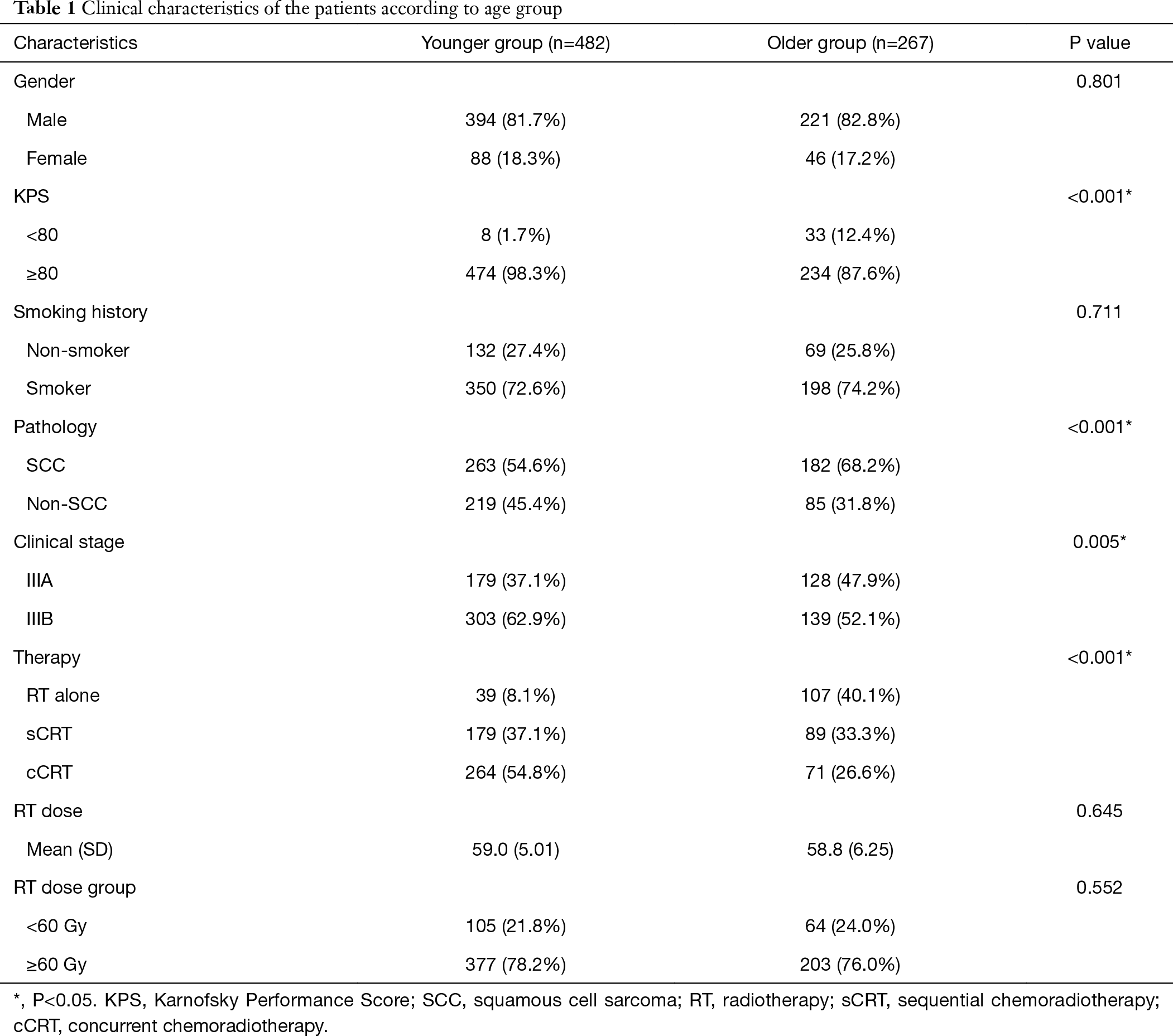 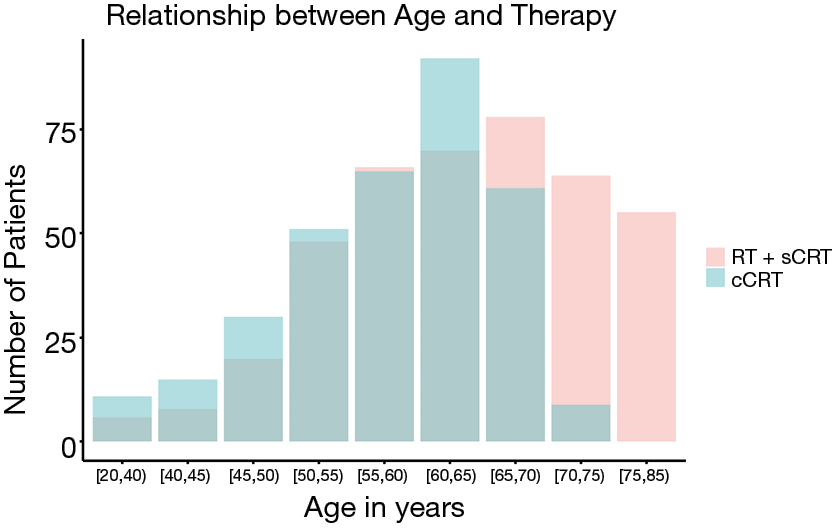 The prognostic value of age at diagnosis for OS 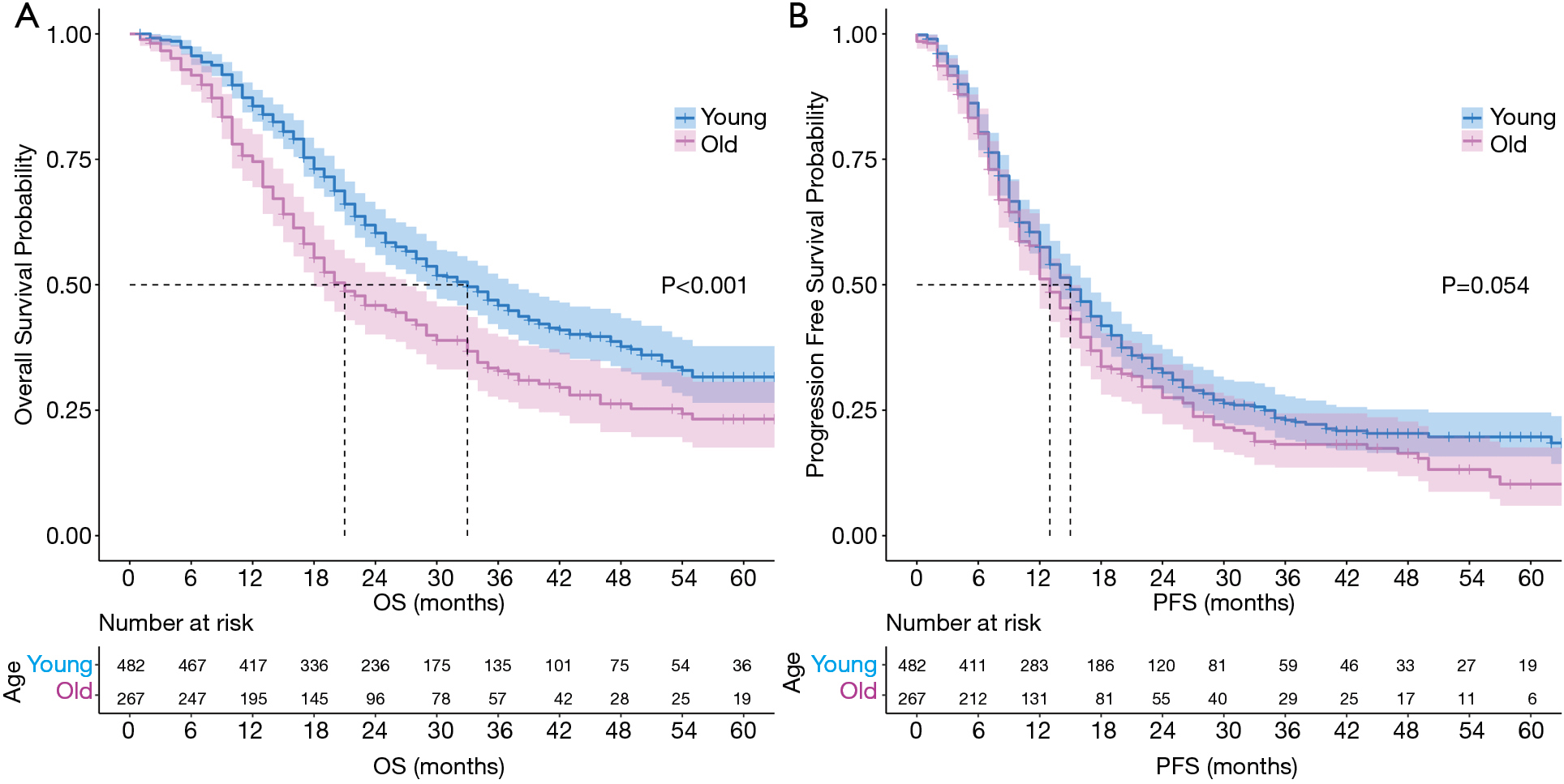 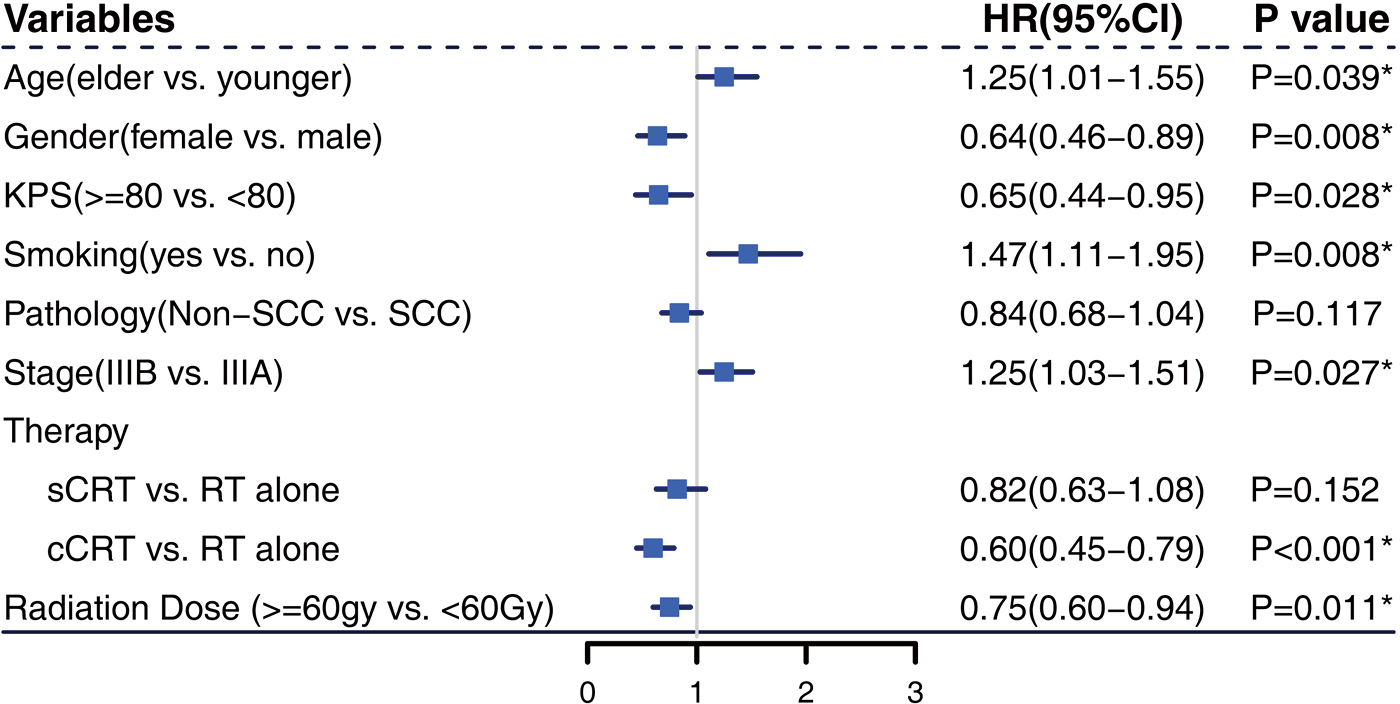 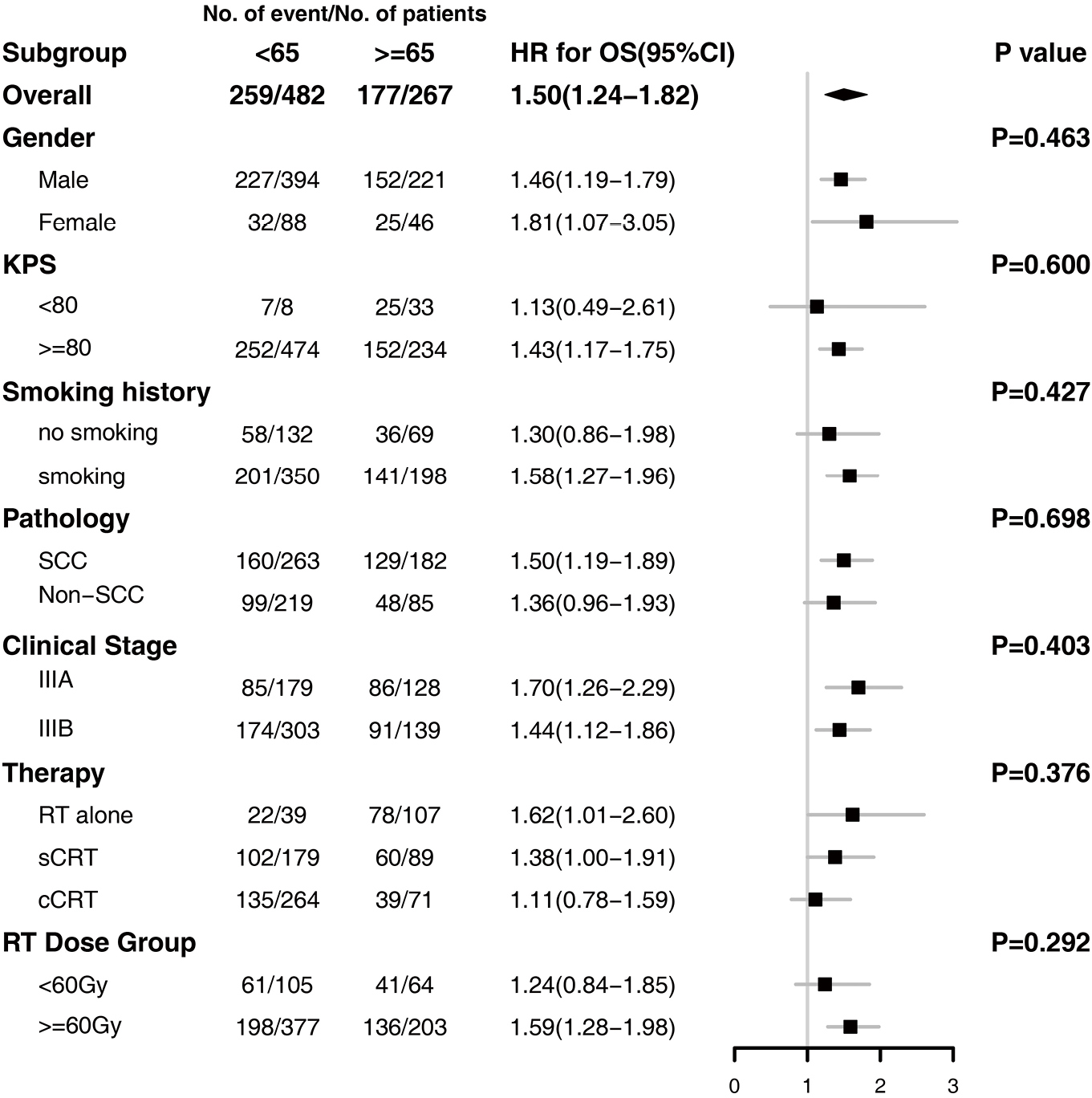 The radiation-related toxicities experienced by the patients are listed in Tables 2 and 3. The type and rate of toxicities were similar between the two groups. More patients suffered from grade 3–5 of hematologic toxicity in the younger group than in the older group (13.3% vs. 7.9%, P=0.034). Although the incidences of symptomatic RP and severe RP were similar in the two groups (18.9% and 6.2% in the younger group vs. 16.1% and 7.9% in the older group, P<0.05). There was a higher incidence of fatal RP in the older group (4.5% vs. 1.7%, P=0.039). As shown in Figure 7, the incidence of fatal RP increased with age. 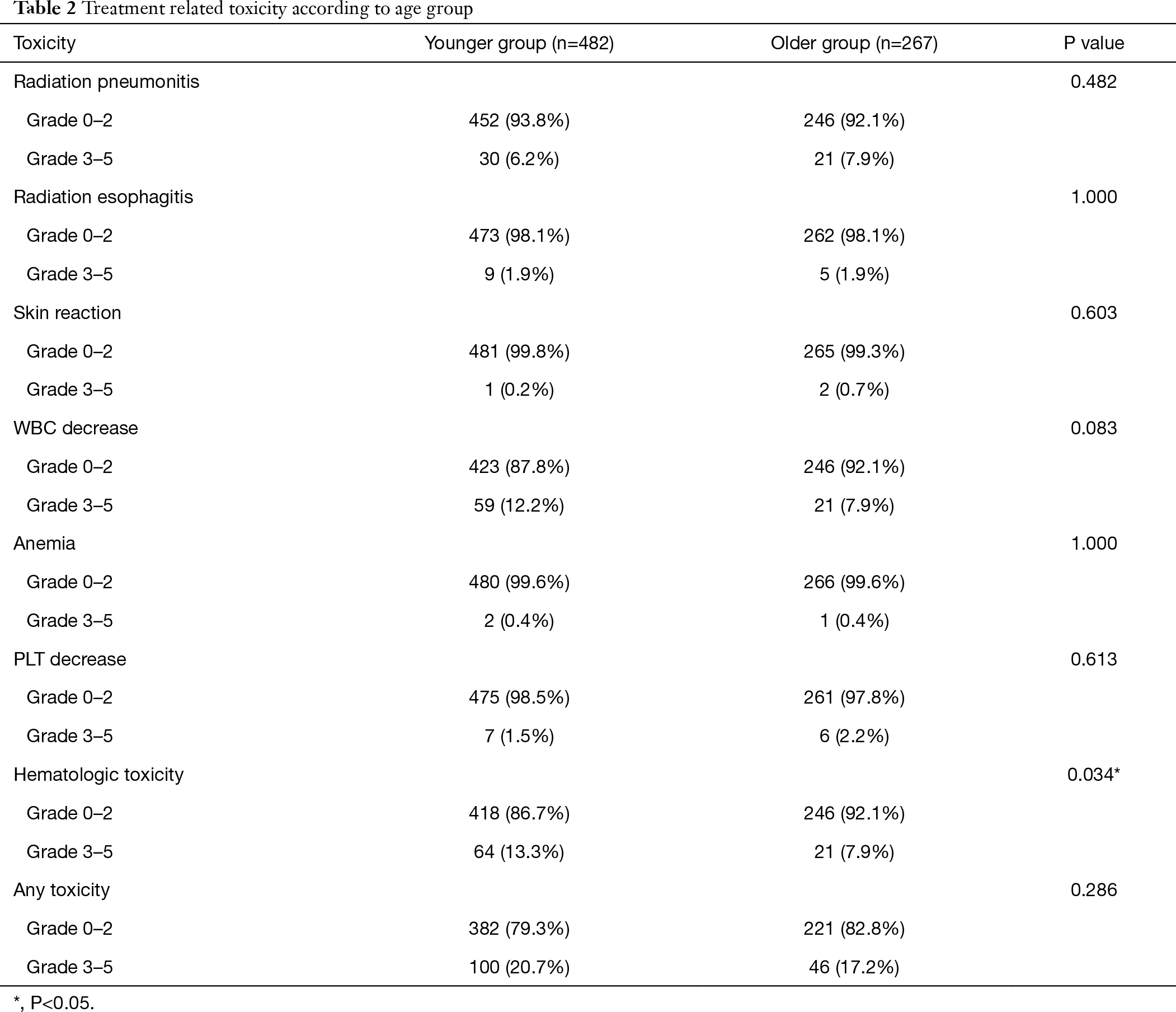 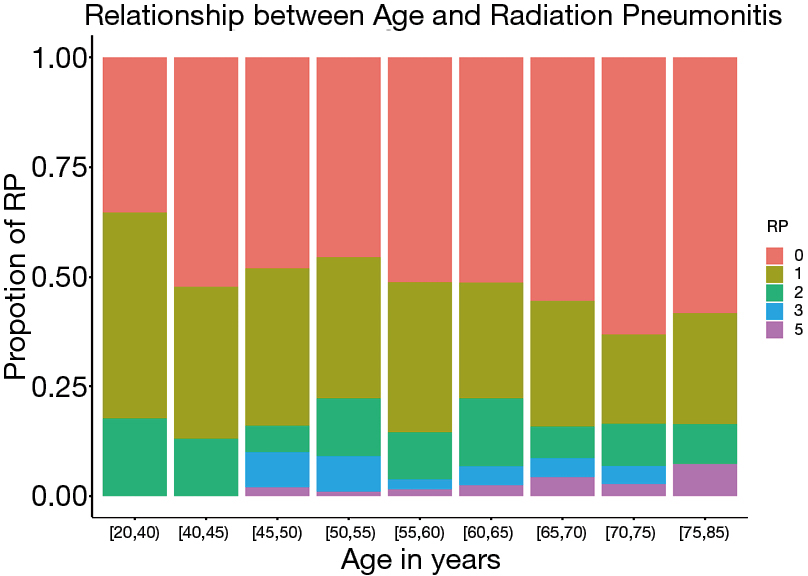 Figure 7 The relationship between age at diagnosis and RP. The incidence of fatal RP increased with age. RP, radiation pneumonitis.

In this study, we found that the clinical characteristics of elderly patients (≥65 years old) and young patients differed. Older patients were also more likely to choose conservative treatment. OS was higher in the younger patients in our study than in the older group. We also found a higher incidence of fatal RP in the older group. To our knowledge, this is the first report about the relationship between fatal RP and age.

Table 1 shows that 12.4% of the older group had poor performance status (KPS <80), compared with 1.7% of the younger group (P<0.001), and that SCC was more common in the older group than the younger group (68.2% vs. 54.6%, P<0.001). Data from the National Cancer Data Base (NCDB) (4) showed similar results. In this analysis, only stage III NSCLC patients were included, and the younger group had more stage IIIB cases (62.9% vs. 52.1%, P=0.004). NCDB (4) and SEER (5) analysis involving all stages of NSCLC found more cases of stage IV lung cancer in younger patients. These analyses and our data showed that younger patients tended to have more aggressive, late-stage tumors. Consistent with our findings, previous data showed that younger patients were more likely to receive the recommended treatment, while older patients were more likely to choose no treatment or conservative treatment (4,5). Of the older patients in our study, we found that only 26.6% received cCRT and 40.1% received RT alone. The proportion of older patients who received RT alone was higher than that of younger patients.

Younger patients generally have better prognosis than older patients; this has been demonstrated in studies on prostate cancer (7,8), thyroid cancer (9), and lymphoma (10). Similar results were also observed for NSCLC in NCDB (4) and SEER (5,6) analysis. Our analysis focused specifically on patients with unresectable locally advanced NSCLC who received either RT alone, sCRT, or cCRT. Our conclusion was consistent with the results of these previous studies. Multivariate Cox regression analysis (Figure 5) determined age at the time of diagnosis to be an independent prognostic factor for OS. Subgroup analysis produced the same results (Figure 6). Figure 4A,B showed that the younger patients had better OS than the older patients, while the two groups had similar PFS. The NCDB (4) and SEER (5,6) studies did not take PFS data or the relationship between PFS and OS into account. We hypothesized that the following reasons may be related to the poorer OS of the older patients and the similar PFS of the two groups. First, the older patients were more likely to refuse recommended therapy after progression. Second, the older patients had a higher risk of dying from causes other than lung cancer (analysis from SEER database, which was not reported yet). More data are needed to approve these two hypotheses. Third, as shown in Table 3 and Figure 7, the rate of fatal RP was higher in the older patients than in the younger patients, while the rates of symptomatic RP and other toxicities were similar in both groups. Some studies have found that elderly patients are at increased risk of side effects from chemotherapy or targeted therapy (17,18). Our analysis did not identify this trend in radiation esophagitis, skin reaction, and hematologic toxicity, which may be related to fewer patients in the older group receiving chemoradiotherapy. Palma et al. (19) found that the incidence of symptomatic RP increased with age in univariate analysis; however, this was not reflected in multivariate analysis. Meanwhile, Tsujino (20) found that older patients were more likely to have severe RP (20.6% vs. 8.0%, P=0.05). Neither of these two studies reported the relationship between age and fatal RP. We found higher incidences of fatal RP and similar symptomatic RP in the older group after RT than in the younger group, which means the elderly patients were less likely to recover from symptomatic RP.

This study has some limitations. First, this analysis was based on a retrospective, single-institution database. Also, compared with the SEER and NCDB studies, which involved hundreds of thousands of individuals, only 749 patients were enrolled in our study (3,4,6). Furthermore, some relevant information, such as the treatment compliance, treatment after progression, and cause of death, was missing. This information may help to explain how age affects patients’ survival. The NCDB study used modified Charlson-Deyo scores to record the comorbidity of patients and found that those with a higher age had a higher score; however, this was not available in our analysis. Additionally, patients with incomplete information or those lost to follow-up were excluded, which may have led to bias. After the amazing results of the PACIFIC trail were published (11,12), durvalumab as consolidation therapy was recommended for unresectable stage III NSCLC. Although the patients included in our data were treated before the PACIFIC era and no patients received consolidative immunotherapy, the current analysis stresses the need to pay more attention to elderly patients when consolidative immunotherapy is used, due to the high risk of fatal RP in older patients.

In conclusion, the elderly patients with unresectable locally advanced NSCLC in our study had poorer performance status and were more likely to have SCC and stage IIIA disease than younger patients. They also tended to choose conservative treatment more. Importantly, age at diagnosis had prognostic value for OS. More attention should be paid to the risk of fatal RP associated with chemoradiotherapy with/without consolidative immunotherapy in elderly patients.

Funding: This work was supported by CAMS Innovation Fund for Medical Sciences (2017-I2M-1-009).

Reporting Checklist: The authors have completed the STROBE reporting checklist. Available at http://dx.doi.org/10.21037/jtd-20-2137

Conflicts of Interest: All authors have completed the ICMJE uniform disclosure form (available at http://dx.doi.org/10.21037/jtd-20-2137). The authors have no conflicts of interest to declare.

Ethical Statement: The authors are accountable for all aspects of the work in ensuring that questions related to the accuracy or integrity of any part of the work are appropriately investigated and resolved. The study was conducted in accordance with the Declaration of Helsinki (as revised in 2013). The study was approved by the Independent Ethics Committee of National Cancer Center/National Clinical Research Center for Cancer/Cancer Hospital, Chinese Academy of Medical Science and Peking Union Medical College (No. 20/179-2375). Because of the retrospective nature of the research, the requirement for informed consent was waived.