Lung cancer is the leading cause of cancer related death (1-5) with an estimated yearly global incidence of 1.8 million and an estimated yearly mortality of 1.6 million (1). Surgery is the treatment of choice for early stage non-small cell lung cancer (NSCLC) and can give five-year survival rates as high as 70% (3,6). Anatomical lobectomy with lymph node dissection is considered the standard of care for clinical (c)T1, N0 peripheral lung nodules since the landmark trial reported by the Lung Cancer Study Group (LCSG) in 1995 (2,3,5,7-10). An important prerequisite for lobectomy however, is the adequacy of pulmonary function and functional status of the patients. There are an estimated 30% of patients with surgically resectable tumors, but are-medically unfit for lobectomy (8). Segmentectomy has traditionally been considered a compromise operation for patients with limited pulmonary reserve, advanced age, severe comorbidities or other clinical features that may preclude lobectomy (2,7). However, there is a growing body of evidence that supports anatomic segmentectomy with oncologic outcomes similar to lobectomy in early stage NSCLC less than 2 cm in greatest dimension (4,7).

The risk of developing metachronous, recurrent or second primary lung cancer has been estimated at 1% to 2% per patient-year. Hence, patients following segmentectomy are more likely to withstand further therapeutic lung cancer surgery (11-13). Nevertheless, selection criteria for lobectomy versus segmentectomy should include consideration of several important clinical variables, not fully defined yet, and caution must be exercised regarding inappropriate use of segmentectomy in patients otherwise good surgical candidates for lobectomy. Important clinical determinants that strongly support lobectomy over segmentectomy include, but not limiting to, young age, aggressive tumor histology and (c)N1/N2 disease (14,15). The purpose of this study is to further characterize long term survival outcomes following lobectomy and segmentectomy in patients with high grade (poorly differentiated and undifferentiated) NCSLC ≤2 cm using Surveillance, Epidemiology and End Results (SEER) database. We present the following article in accordance with the STROBE checklist (available at http://dx.doi.org/10.21037/jtd-20-1530).

We conducted a retrospective database study using the SEER database, a registry of the National Cancer Institute (16). The SEER database is an extensive source of population-based data that covers approximately 28% of the US population. We queried 18 SEER registries (November 2018 submission) from 2004 to 2015 for all patients with high grade early stage pathological (p)T1, ≤2 cm, node-negative disease status (p)N0 NSCLC who underwent either segmentectomy or lobectomy. Though the SEER database does not include the TNM 8th edition for tumor staging, all cases were manually staged according to the 8th edition by incorporating data on tumor size, lymph node and metastasis status. Using the “International Classification of Disease, Third Edition” (ICD-O-3) codes, we queried for primary site “lung” (ICD-O-3 C34.1–C34.9). Tumor of the main bronchus (ICD-O-3 C34.0) overlapping tumors and tumors with unspecified locations were excluded. The SEER database uses the four-tier system for tumor grade. Based on this, we included only grade III (poorly differentiated) and grade IV (undifferentiated) tumors in our cohort. Our study conforms to the Declaration of Helsinki (as revised in 2013). Since our study utilizes de-identified data from a publicly accessible database, individual consent is waived and our study is exempt from IRB review.

Data from the SEER database was imported on to the Statistical Package for the Social Sciences software (SPSS v.23.0, IBM Corp., USA) for further analysis. Unadjusted comparison between groups was conducted using the chi-square test or Fisher’s exact test (as appropriate) for categorical variables and Student’s t-test for continuous variables. Comparisons for non-parametric variables was done using Mann Whitney U test. Survival time was measured from the time of diagnosis to the time of death or last follow-up, median and 5-year survival indices were estimated by the Kaplan-Meier method and compared using log-rank test. We subsequently computed propensity scores to assess the probability of being assigned to a treatment group (segmentectomy or lobectomy), based on the observed patient’s demographic, and pretreatment clinical characteristics. Logistic regression model was used to calculate the propensity scores derived from these confounding preoperative parameters. These variables were determined a priori and included age, sex, race, year of diagnosis, marital status and preoperative tumor characteristics (size, histology, tumor location). The most appropriately-matched pairs were selected based on the propensity scores using a 1:1 nearest neighbor algorithm (R-plugin 2.14.2 for SPSS v21.0). The standardized differences for each variable in the lobectomy and segmentectomy cohorts were 0.1 or less, except for tumor location, indicating well-matched samples. After the propensity score matching, differences in pre-treatment clinical and demographic variables between groups were further assessed using Pearson’s chi-square or Fischer’s exact test for categorical variables and Student’s t-test for continuous variables. The Kaplan-Meier method was used to compare OS between the propensity matched groups. Additionally, multivariate cox-regression was used to study relationship between various patient and disease-specific factors and survival. 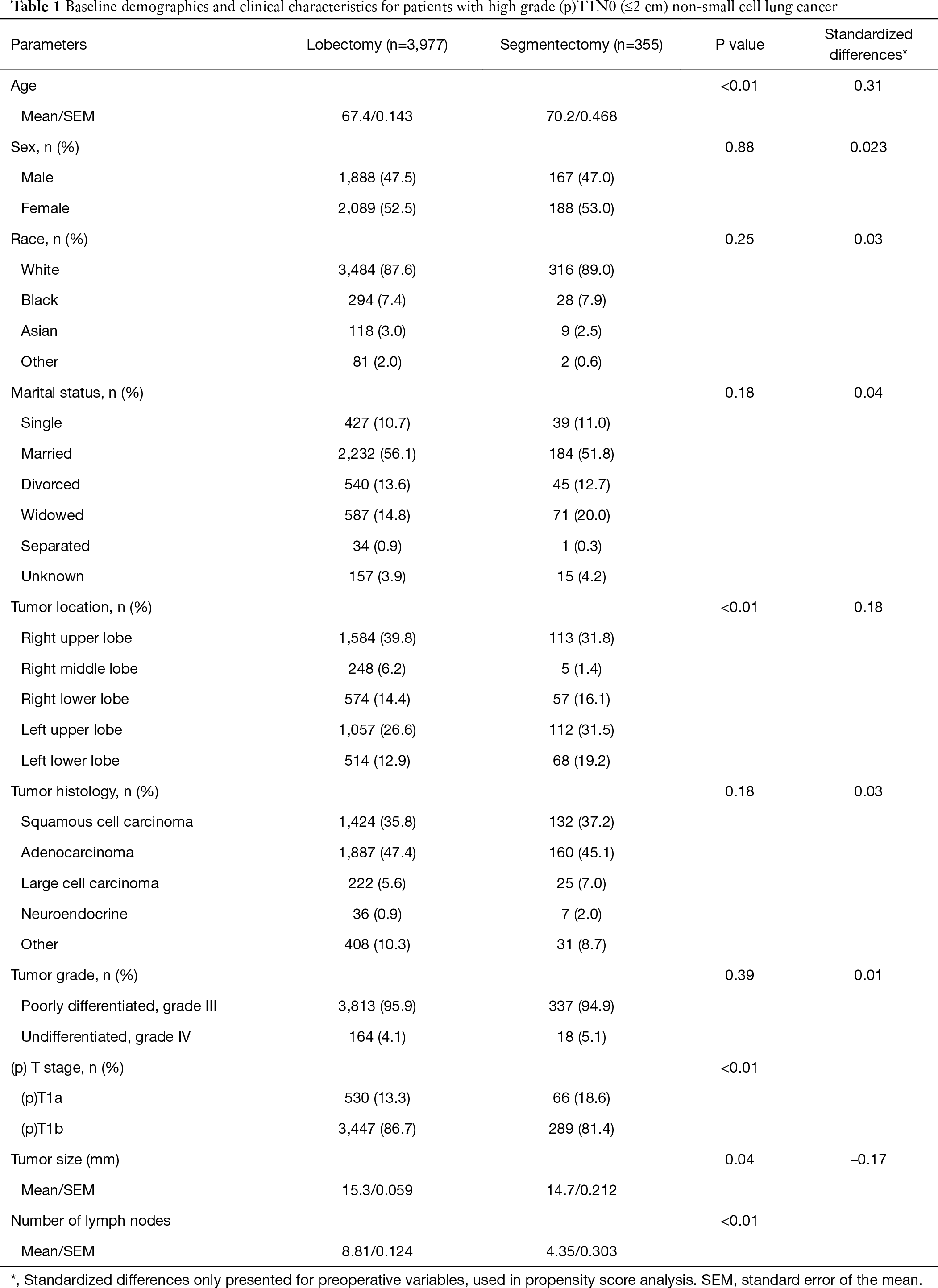 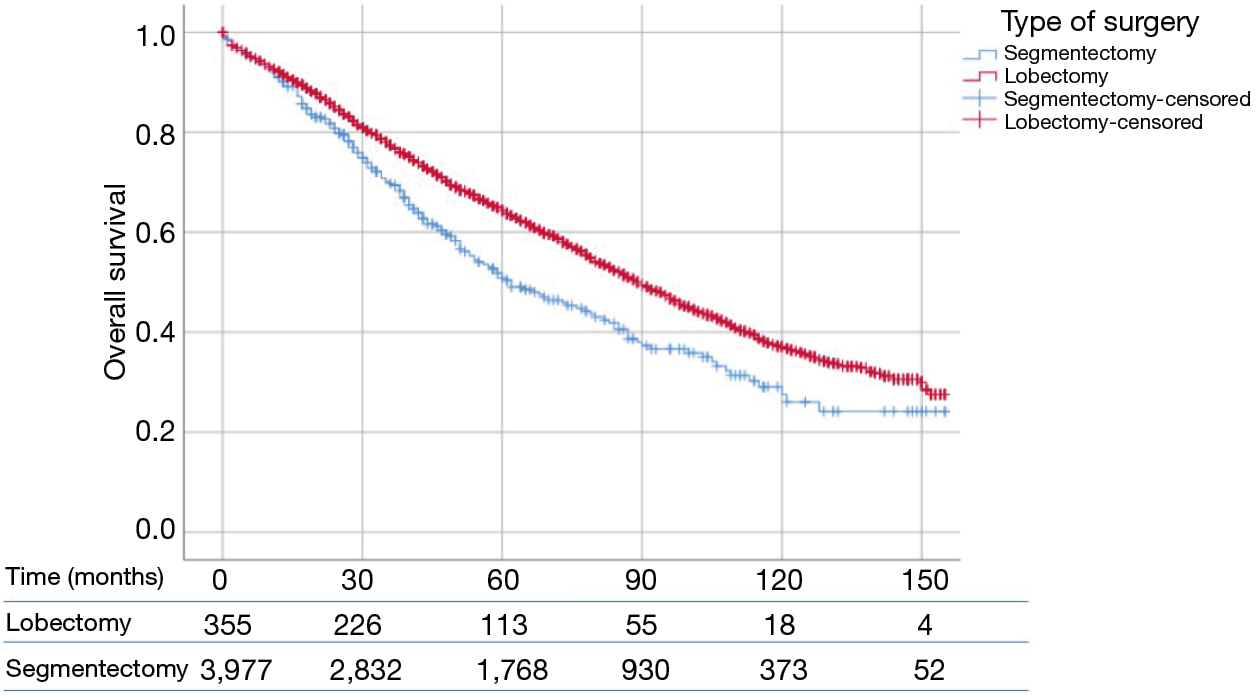 Propensity matching yielded 640 patients (320 matched pairs) from lobectomy and segmentectomy groups. There were no significant differences in baseline characteristics between the two groups after matching (Table 2). Patients following lobectomy had significantly higher OS when compared to patients undergoing segmentectomy (P=0.011) (Figure 2). The median OS values was 87 and 62 months for lobectomy and segmentectomy respectively. One-, 3- and 5-year survival for the lobectomy group was 90.9%, 66.3% and 45.9% whereas for the segmentectomy group it was 91.3%, 57.5% and 33.8% respectively (P=0.89, P<0.05 and P<0.01). We further investigated the correlation between OS and other covariates in a Cox Regression Analysis. Multivariate analysis demonstrated that lobectomy was associated with significantly improved survival (HR: 0.84, 95% CI: 0.714–0.989, P=0.036). Additionally, married status, adenocarcinoma histology and number of lymph nodes sampled were associated with better survival (P<0.05), while advanced age and male gender had worse survival outcomes (P<0.05) (Table 3). 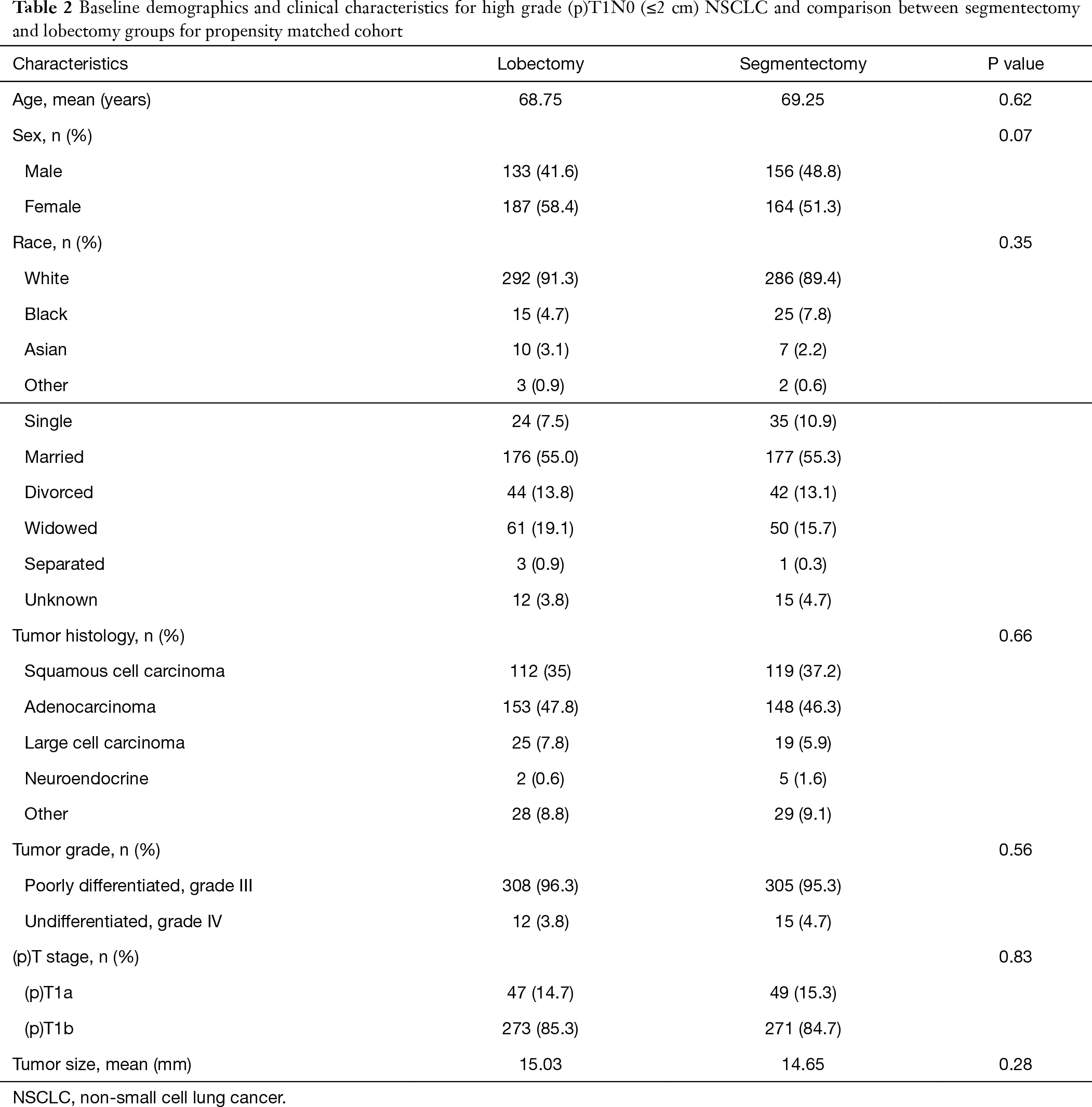 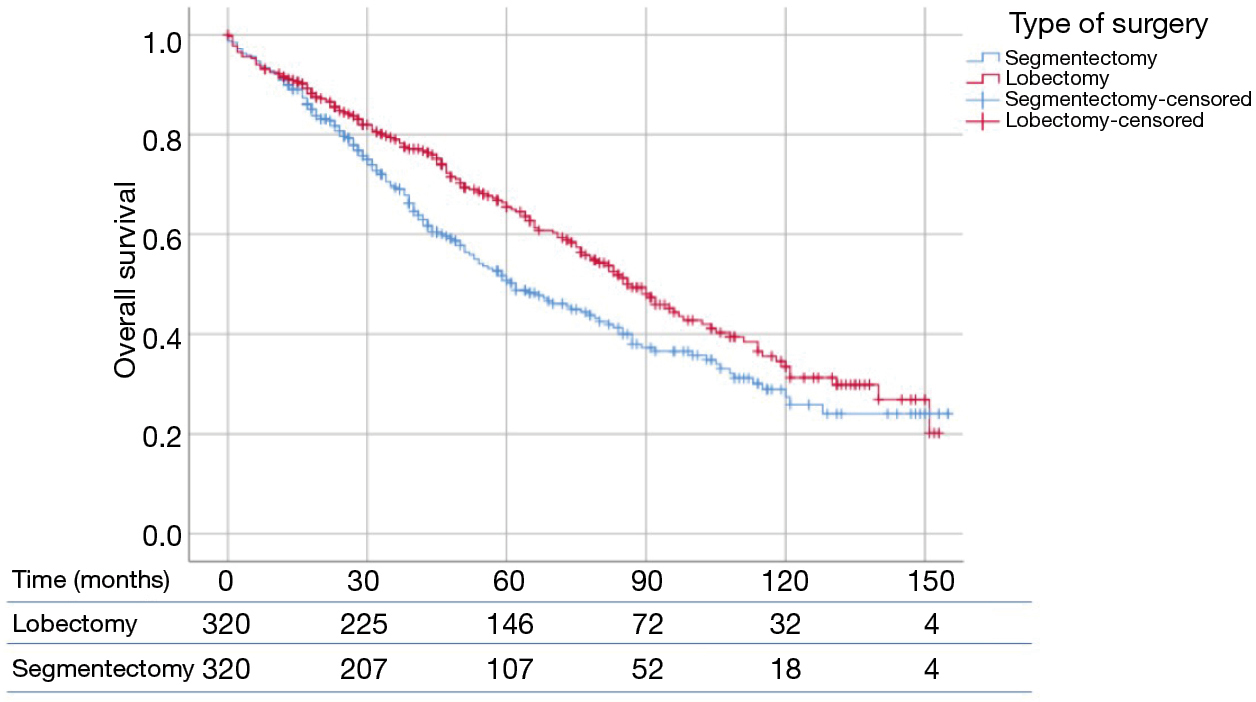 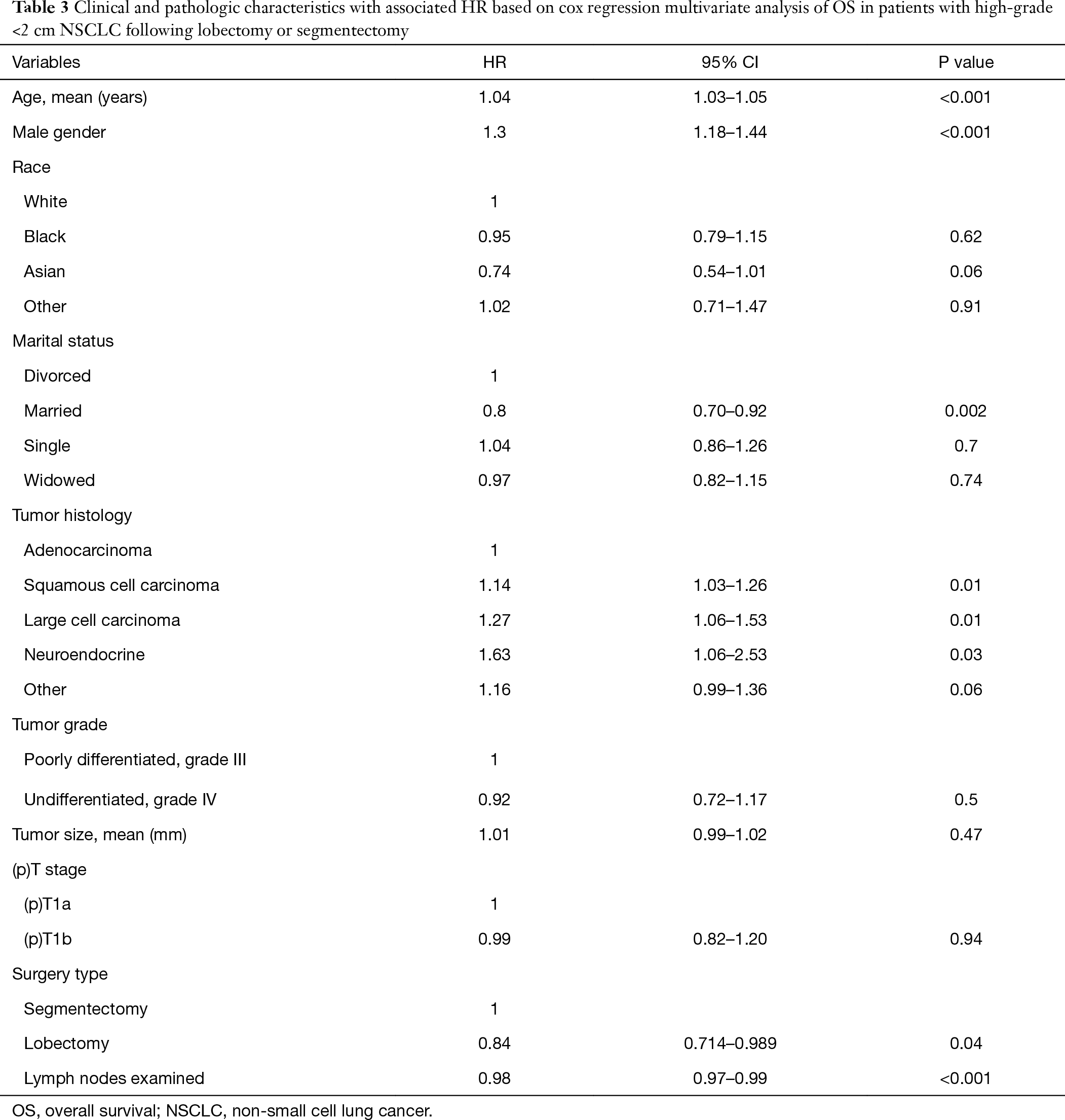 Since the results of the LCSG showed higher rate of recurrence and decreased OS with sublobar resection, lobectomy has remained the standard of care for early stage 1A NSCLC (4). Over the last two decades, a growing body of evidence that comprised primarily of large retrospective reviews, supported oncologic equivalence of segmentectomy and lobectomy for early stage NSCLC, and with better preservation of lung function (14,17-19). Previous studies have cited following criteria for segmentectomy: tumors ≤2 cm, anatomically favorable location with margins ≥2 cm, and no evidence of clinically positive lymph nodes (14). Further studies have explored the various tumor histopathological characteristics as a point of comparison between lobectomy and segmentectomy for early stage NSCLC (15). However, this is the first study to investigate the impact of high-grade tumors on OS in patients undergoing lobectomy or segmentectomy for ≤2 cm NSCLC.

Segmentectomy as compared to wedge resection has the distinct advantage of achieving oncologic outcomes comparable to lobectomy, in a select group of patients (14). However, caution must be exercised when selecting patients for segmentectomy purely on the grounds of tumor size and achievable margins ≥2 cm. Certain histological types, such as large cell neuroendocrine tumor has been shown to exhibit significantly worse survival outcomes following wedge resection and segmentectomy, as compared to lobectomy (14,15). Similarly, Eguchi et al. studied the ‘spread through air spaces’ (STAS) as a form of invasion, wherein tumor cells extend beyond the tumor edge within the lung parenchyma (20). Interestingly, patients with STAS who underwent sublobar resection as opposed to lobectomy for T1 NSCLC, showed higher risk of locoregional recurrence despite adequate margin to tumor ratio (≥1). This was corroborated by Kim et al. and others, who have shown STAS and PD-L1 expression as important prognostic variables in patients with early stage NSCLC (21). On the contrary, the concept of tumor metabolic activity as measured by the PET scan [standard uptake value (SUV) max] as a point of contention between lobectomy and segmentectomy was dispelled by Kamel et al., where the authors showed equivalent survival between lobectomy and segmentectomy for (c)T1N0 NSCLC, with SUV max values ≥3 g/dL (22). Similarly, Razi et al. showed equivalent survival between lobectomy and segmentectomy for clinical stage IA lung cancer with unsuspected (p)N1/N2 disease, essentially challenging the dogma mandating lobectomy when unsuspected microscopic lymph node metastases is diagnosed intraoperatively (23). In essence, there are potentially host of yet unknown histopathological markers that may portend poorer prognosis with limited lung resection surgery.

Histologic grade of a tumor provides prognostic information in addition to that provided by the stage of the disease (24). A previous analysis of 5,018 hospital-based patients diagnosed between 1997 and 2003 and 712 population-based patients diagnosed between 1984 and 2003 with NSCLC revealed that histologic grade was significantly associated with survival after adjustment for the effects of age, sex, smoking status, tumor stage, histologic subtype and treatment administered (25). In our cohort of (p)stage 1, grade 3 and 4 NSCLC less than 2 cm, we have shown that both unmatched and matched cohorts demonstrate significantly better survival outcomes for lobectomy as opposed to segmentectomy. To the best of our knowledge, our study is the first to compare segmentectomy and lobectomy specifically for high grade NSCLC and significantly enhances our understanding for appropriate patient selection for segmentectomy.

It is also important to appreciate that our study, being a population-based database is multi-institutional and mirrors the practice across the United States. However certain limitations exist to our data that is inherent to any large population-based study. Being a retrospective study, some degree of selection bias is inevitable. We tried to remedy this by using a propensity-matched and multivariate analysis. Secondly the SEER database does not contain information on patient comorbid conditions. These may be an important confounding factor when looking at survival outcomes as patients who undergo segmentectomy tend to have a greater number of comorbidities and reduced baseline lung function. Also important are the technical disparities among operators on what constitutes a segmentectomy. Another important distinction that could not be made from SEER database, is whether the information on histologic grade was available prior to planned operation, or on final pathology after the surgical resection.

Based on our analysis of 4,332 patients over 12 years, we conclude that lobectomy is associated with better long-term survival outcomes as compared to segmentectomy for small peripheral NSCLC ≤2 cm and high grades of tumor differentiation. We believe that additional work is needed to further refine the criteria for segmentectomy, stratifying various NSCLC histologies with their respective grades to allow for more comprehensive selection for segmentectomy.

Reporting Checklist: The authors have completed the STROBE reporting checklist. Available at http://dx.doi.org/10.21037/jtd-20-1530

Conflicts of Interest: All authors have completed the ICMJE uniform disclosure form (available at http://dx.doi.org/10.21037/jtd-20-1530). The authors have no conflicts of interest to declare.

Ethical Statement: The authors are accountable for all aspects of the work in ensuring that questions related to the accuracy or integrity of any part of the work are appropriately investigated and resolved. Our study conforms to the Declaration of Helsinki (as revised in 2013). Since our study utilizes de-identified data from a publicly accessible database, individual consent is waived and our study is exempt from IRB review.