The topic of myocardial protection has been accompanied by the development of cardiac surgery for decades. In the development of myocardial protection research and clinical practice, a series of milestones have been achieved, such as hypothermia, high potassium depolarization arrest, ventricular drainage, St. Thomas crystalloid solution, 4:1 blood cardioplegia and multiple perfusion methods as the core of systematic Buckberg blood cardioplegia concept and Brettschneider solution (Custodial-HTK solution). At our institution, the classical blood cardioplegia (CBC) based on St. Thomas solution, referring to the basic principles of Buckberg (mixed with patient blood in a 1:4 ratio) has been used in adult cardiac surgery. However, this solution is repeated administered at 20–30 min thereafter, which may have interrupted the surgeon.

del Nido cardioplegia (DNC), as a hyperkalemia, non-calcium imitating extracellular ﬂuid, has been well used in pediatric cardiac surgery for decades (1). In recent years, DNC (mix with patient blood in a 4:1 ratio) has attracted much attention in adult cardiac surgery, owing to single-dose, ease of administration, and less expense (2-4). It has been used in our center since May 2017, as an alternative (5). Meanwhile, this cardioplegia had been well accepted by our cardio-vascular surgical team. Although it has been reported that DNC has been successfully used in adult cardiac surgery at some heart centers (6-8). No clinical trial has tested whether DNC could safety and efficacy used in surgery for aortic root disease in adults, because of the longer heart arrested time than isolated cardiac valve surgery. Therefore, a historically controlled study was established to prove whether DNC could evaluate myocardial protection not inferior to CBC during primary surgery for aortic root disease, with mild hypothermic cardiopulmonary bypass (CPB). We present the following article in accordance with the STROBE reporting checklist (available at http://dx.doi.org/10.21037/jtd-20-1101).

This study was a single-center, non-randomized, historically controlled trial. Between July and December 2017, a total of 93 consecutive patients underwent the aortic root surgery by the same team of surgeon at our institution, including total aortic root replacement (n=41), valve-sparing aortic root replacement (n=9) and aortic valve plus ascending aorta replacement (n=43), without deep hypothermic circulatory arrest. All patients were divided into two groups based on the type of cardioplegia solution: the CBC (CBC group, n=50) and del Nido cardioplegia (DNC group, n=43).

All patients were performed using standard intravenous inhalation-general anesthesia, median sternotomy approach, with mild hypothermia CPB (32 to 35 °C). Ice slush was covered on the heart to ensure that the right ventricle remained cold, when heart arrested. Intraoperative transesophageal echocardiography was routinely used. Left ventricular drainage was used in patients with severe aortic insufficiency. Myocardial protection was achieved with either CBC or DNC as follows (Table 1 for a comparison of cardioplegia solution composition). The decision about the cardioplegia used was made by surgeon. In both groups, the cold cardioplegia (4 °C) was delivered direct through left and right coronary artery, or aortic root with an induction dose (1 liter). In CBC group, the induction cardioplegia was administered with CBC No. 1. In addition, repeated doses of CBC were given CBC No. 2 via retrograde coronary sinus catheter or coronary artery at 20–30 min intervals in CBC group. In general, the CBC was based on St. Thomas solution, referring to the basic principles of Buckberg solution, with controlled terminal warm blood cardioplegia (hot shot) given before cross-clamp removal (approximately 300–400 mL) (3). In DNC group, repeated dose (300 mL) of DNC was given via coronary artery at 60 min intervals if the heart arrested expected over 90 minutes. When the proximal aortic anastomosis and coronary reimplantation were done, rapid antegrade cardioplegia was provided to ensure anastomotic absolute hemostasis, in both groups.

This study was conducted in accordance with the Declaration of Helsinki and the Harmonized Tripartite Guideline (as revised in 2013). This study was reviewed and approved by the Ethics Committee in Zhongshan Hospital of Fudan University (approval NO: 2017-120) and was conducted in full compliance with its policies and procedures. All patients enrolled completed the informed consent form. All data were retrieved from the Zhongshan Hospital Fudan University, and approved for use in research by the institutional review board.

Median (interquartile range), mean (standard deviation) and frequencies (percentages) were summarized according to cardioplegia solution types for non-normal continuous, normal continuous and categorical variables. A propensity score matching was performed and the all variables listed in Tables 2,3 were included in a logistic regression model to estimate the propensity score. Nearest-neighbor matching without replacement was used and the width of caliper equaled to 0. Loosing caliper to get more matched samples. Matching of two groups was performed to the demographic characteristics. For all data, Chi-square tests or Fisher Exact Tests were used for comparison of categorical variables and Wilcoxon tests (t test) were used for non-normal (normal) continuous variables between the two groups (Tables 3-7). A subset analysis with matched data were summarized according to cardioplegia solution types (DNC solution and CBC solution) and ACC time (more than 90 minutes and less than 90 minutes). All data were analyzed by R (version 3.5.3). 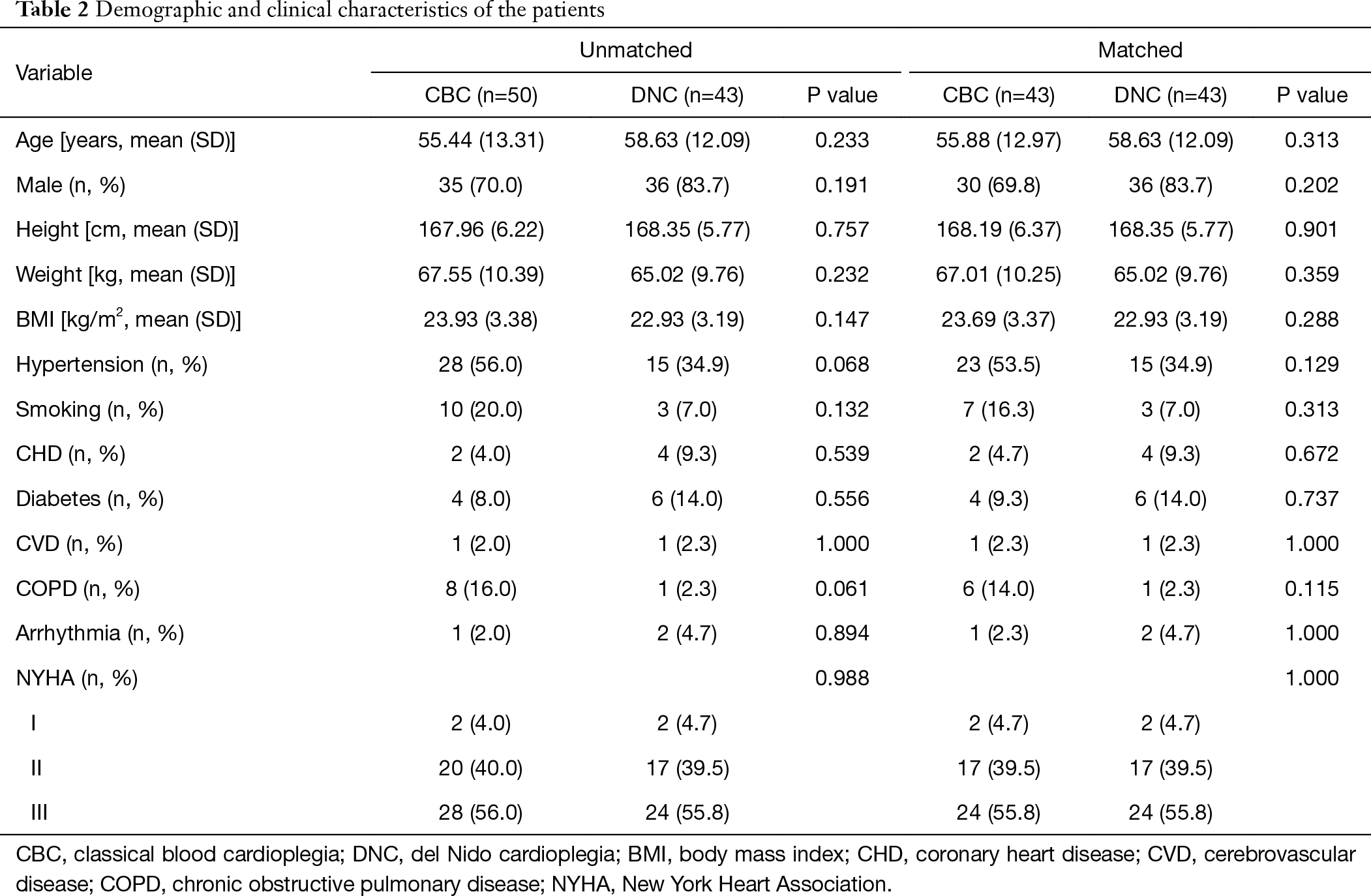 Table 2 Demographic and clinical characteristics of the patients
Full table 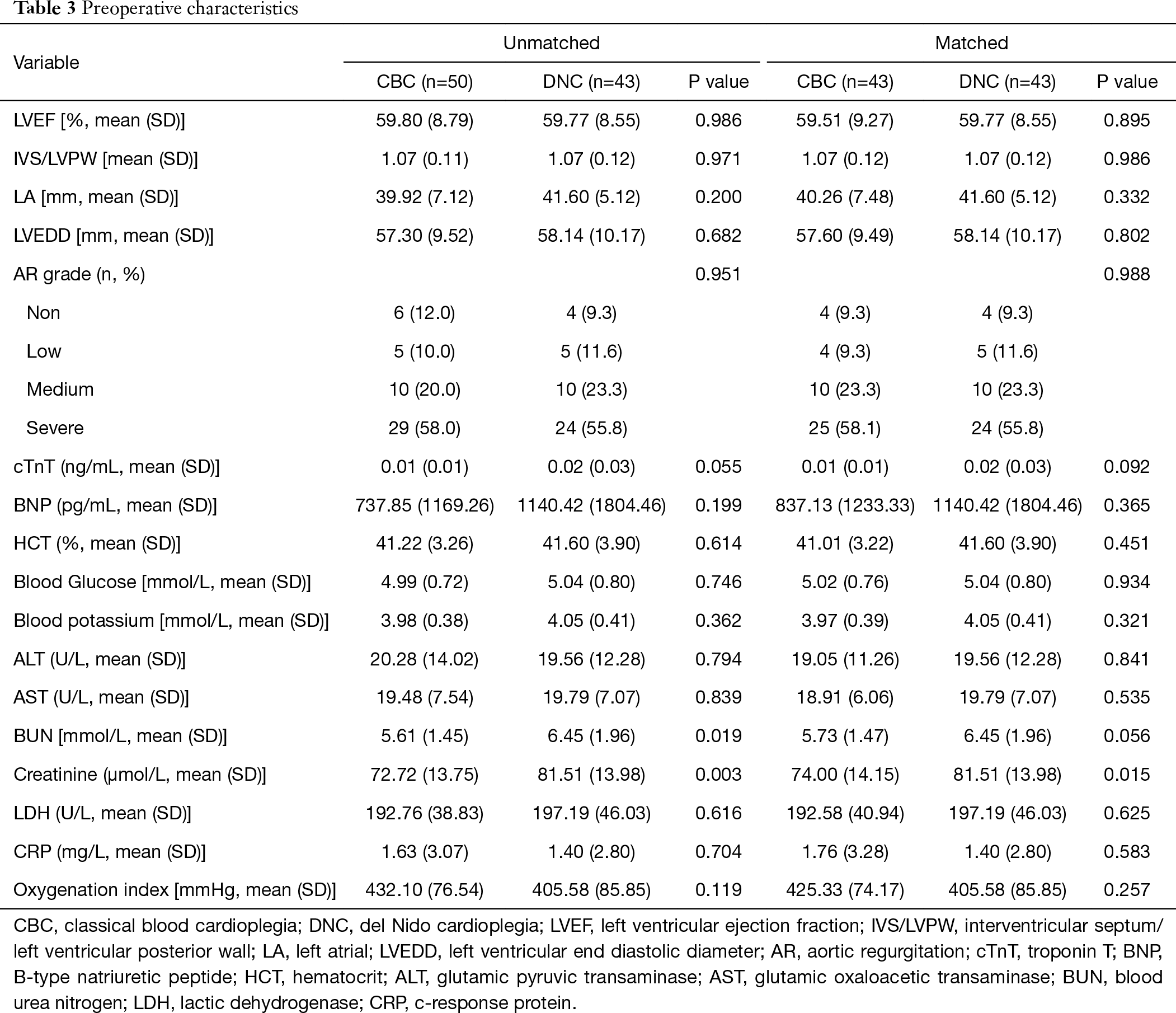 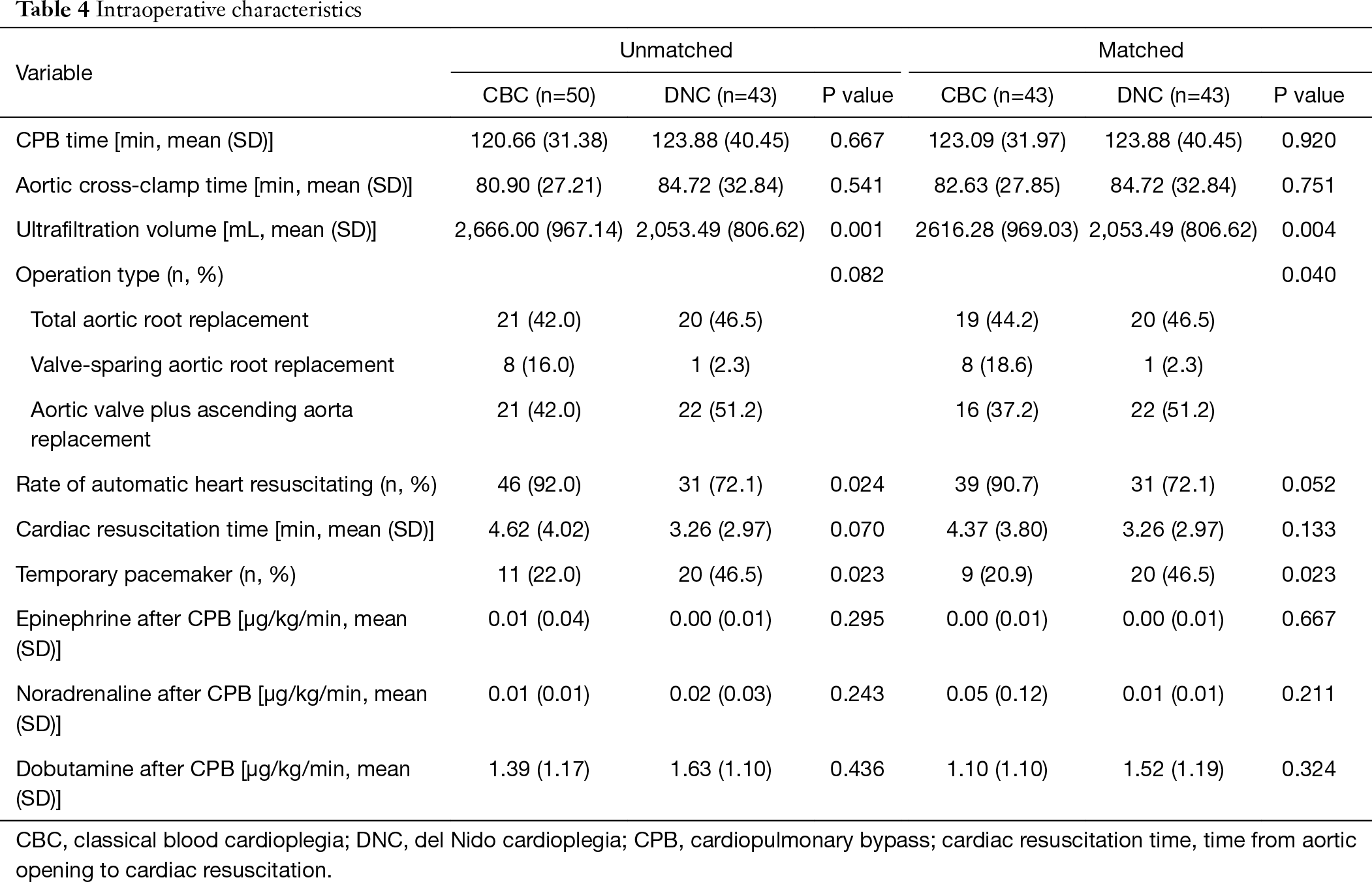 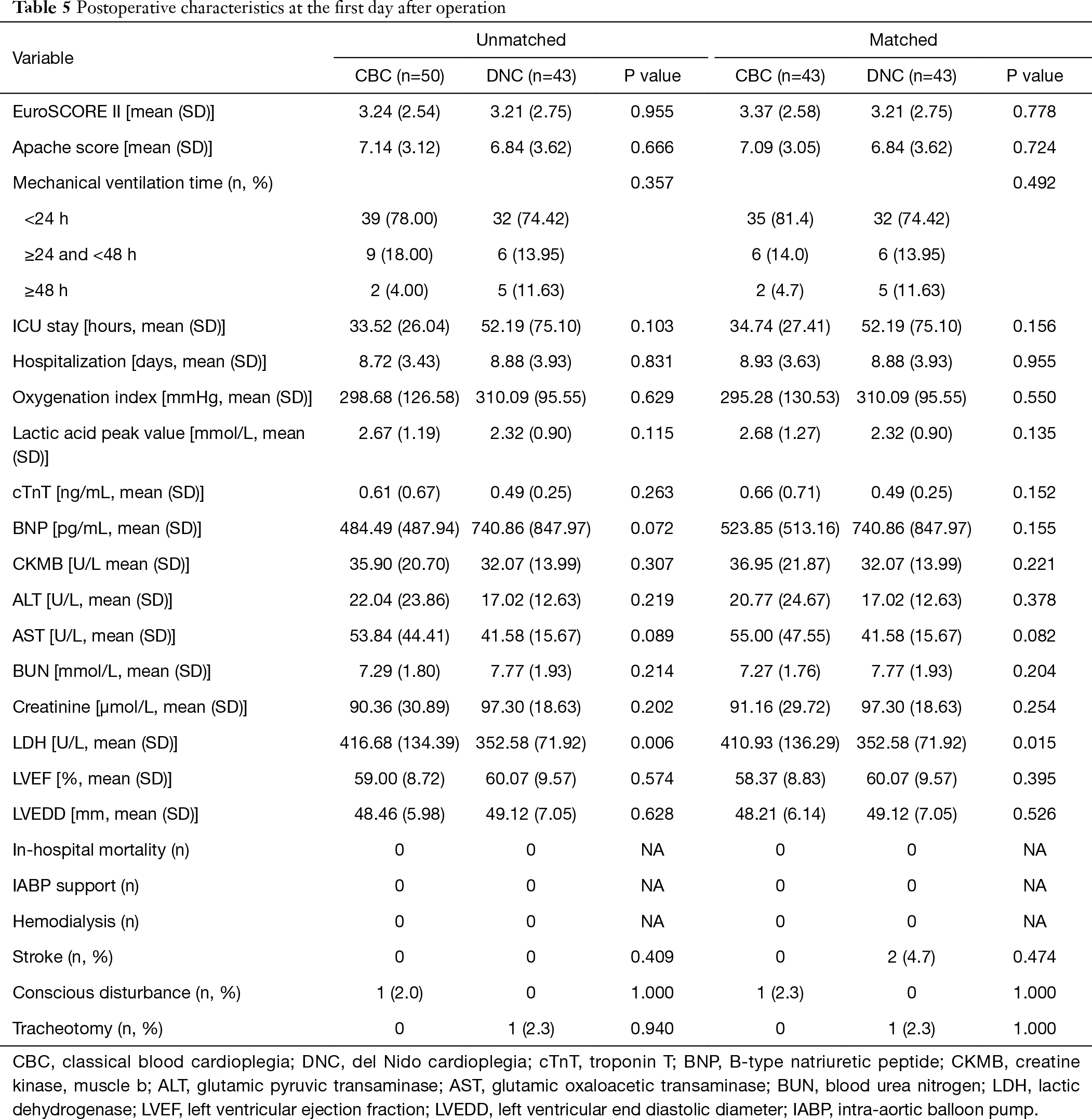 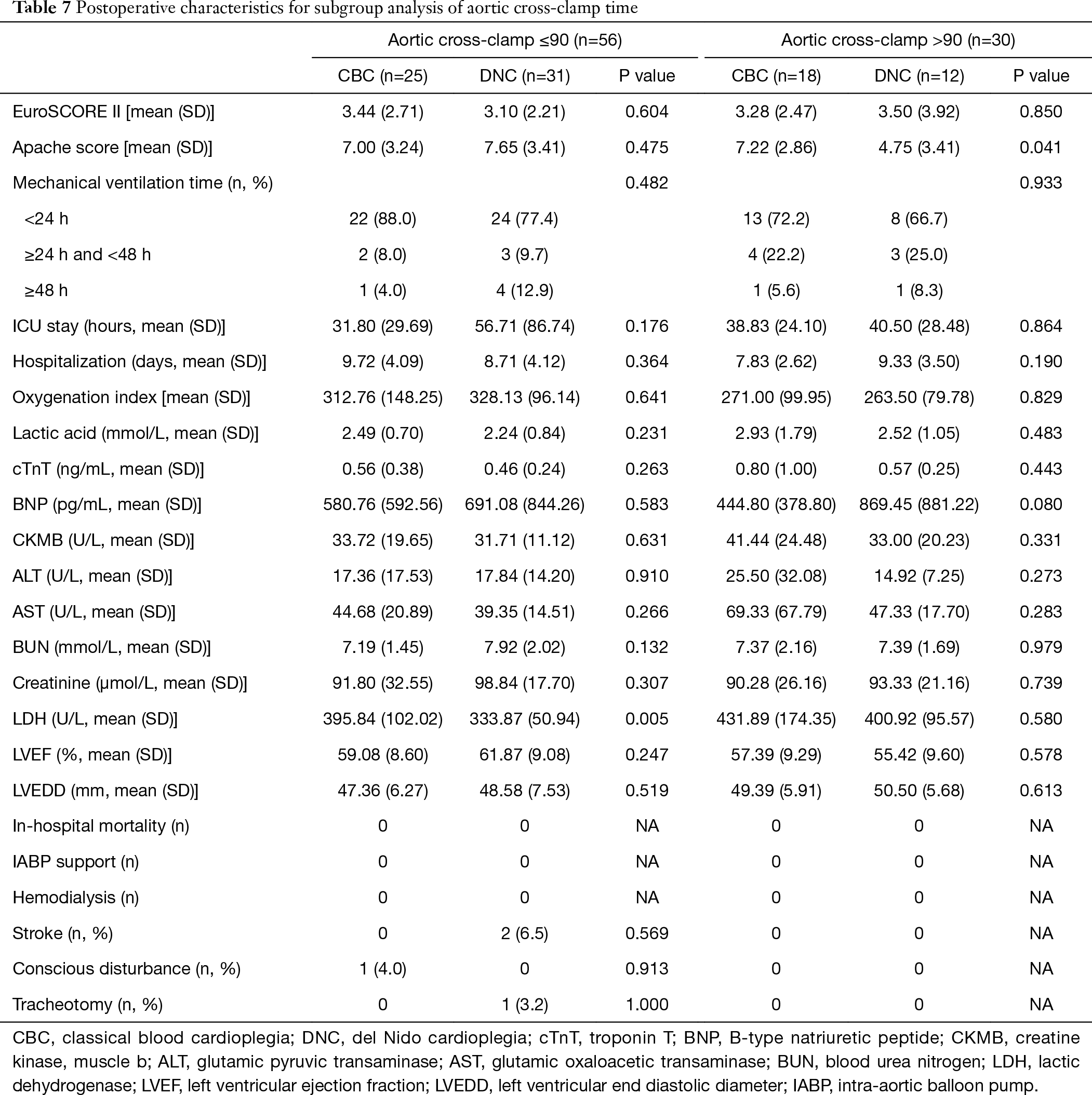 Patient general situation, comorbid medical conditions, preoperative echocardiographic data and variable laboratory inspection are presented in Table 2,3. There were total 93 patients reviewed, 50 in the CBC group and 43 in the DNC group. 43 patients in CBC group were matched vs. 43 patients in DNC group. Compared the two groups, serum urea nitrogen and creatinine were lower in CBC group than DNC, before matching. After matching, serum creatinine was still significantly lower in CBC group vs. the DNC group (74±14.15 vs. 81.51±13.98 µmol/L, P=0.015). There were no significant differences between other clinical data across groups.

No patient died or required IABP support/hemodialysis in the perioperative period. Patient postoperative outcomes, laboratory examination, echocardiographic variables, and postoperative in-hospital complications are presented in Table 5. After matching, the measured postoperative cTnT level showed no significant difference among groups, although it was slightly higher in CDC group (mean ± SD, 0.66±0.71 ng/mL for CBC group vs. 0.49±0.25 ng/mL for DNC group, P=0.152). The distribution value of LVEF was similar for groups (mean ± SD, 58.37%±8.83% for CBC group vs. 60.07%±9.57% for DNC group, P=0.395). There were no significant differences in euro score, apache score, mechanical ventilation time, ICU stay time, hospitalization, lactic acid peak value, laboratory data, or end-diastolic diameter of left ventricle (LVEDd), during the study in CBC group versus DNC group. Although there was no difference in oxygenation index between groups at the first day after surgery, the oxygenation index was lower than per-operation. There was a trend towards lower B-type natriuretic peptide (BNP) in the CBC group (P=0.072, in matched group P=0.155). It was significantly lower of lactate dehydrogenase (LDH) in DNC group than CBC group (352.58±71.92 vs. 416.68±134.39, P=0.006, matched P=0.015). In the DNC group, two patients suffered from stroke (P=0.409) and one patient was tracheotomized (P=0.940). One patient developed conscious disturbance and finally on the mend, in CBC group (P=1.000).

In recent decades, cardiovascular surgery technology has made great progress. The importance of myocardial protection technology is self-evident because it not only provides static and bloodless field for surgeons, but also ensures the recovery of myocardial function after operation. In our center, the CBC was used in most adult cardiac surgery for decades, and it had achieved stable clinical results. However, this cardioplegia needed to be repeated every 20–30 minutes. Therefore, it might interrupt the operation and bring inconvenience to surgeons, especially for the critical and complicated patients.

DNC was developed by Dr. del Nido to address the needs of immature myocardium, because of the poor tolerance of myocardial ischemic in neonatal and pediatric cardiac surgery (1). This cardioplegia was a hyperkalemic, non-calcium with lidocaine, magnesium and mannitol additives and mixed with patient blood in a 4:1 ratio. Recently, reports had suggested that the intracellular calcium was overloaded and could lead to irreversible myocardial injury, after myocardial ischemia in mature myocardium, due to the decrease of ATP produced by aerobic metabolism, and weak function of Na+ channel Ca2+ channel, then a large amount of calcium in extracellular fluid moved into mitochondrion along the concentration difference (9-11). Consequently, mitochondrial damage and energy depletion impair myocardial contractile function (12). The concentration of Ca2+ in DN cardioplegia was significantly lower than that in CBC. It was theorized that the lidocaine content in DN could increase the blockade of Na+ channel, and the magnesium could competitive antagonist with Ca2+, thereby, decreasing the influx of Ca2+, preventing calcium overload (13-15). On the other side, the mannitol content in DN could alleviated the myocardial edema, and the sodium bicarbonate, acting as a buffer, could buffer the accumulation of H+ and alleviated the degree of acidosis, during ischemia (1,16). Recent reports had showed that DN cardioplegia had been successfully used in adult cardiac surgery in some centers (6-8). As a consequence, our center hypothesized that DN might have similar myocardial protection effects with CBC. Considering the different methods of cardioplegia perfusion, DN might have some advantages in the surgery for aortic root disease, compared with CBC (17). In this study, we found that DN cardioplegia offered equivalent postoperative outcomes compared to the CBC, regarding to cTnT and CKMB at post-operative day one, post-operative LVEF, vasopressor/positive inotropic drugs after CPB and rate of automatic heart resuscitating we monitored. Although, the use of temporary pacemaker in DNC group was higher than CBC group, we thought that it might because we used cardioplegia to test anastomotic hemostasis condition, when the proximal aortic anastomosis and coronary reimplantation were done. In this condition, the effect of DN was still obvious, and the heart was always soft and beat slowly, after we moved the cross-clamp. In addition, this condition would be better when patients were sent out of the operation room. Therefore, we thought that DN cardioplegia could provide safety myocardial protection, not inferior to classical cardioplegia we used before.

The post-operative ICU stay time for DNC group was higher than CBC group, although there was no statistical significance. We thought that it might because one patient in DNC group suffered from postoperative oxygenation dysfunction and underwent tracheotomy. But beyond that, DN cardioplegia provided similar to classical cardioplegia in mortality, postoperative mechanical ventilation time, and renal insufficiency. Consequently, we thought that DN cardioplegia was safe for aortic root surgery.

The main limitation of our study is its retrospective, small sample size at a single institution. Long-term follow up outcome data were not performed. Finally, there were few patients underwent ACC time greater than 150 minutes, so we could not determine the optimal redosing dosage and time limit for the patients.

In this study, we concluded that the myocardial protection with DN cardioplegia is similar to the CBC, in patients underwent surgery for aortic root disease. In addition, the benefits of extending the redosing time and maintaining surgical continuity cannot be overlooked. For long aortic cross-clamping, it requires more validated studies to determine the optimal redosing dosage and time limit for patients.

Reporting Checklist: The authors have completed the STROBE reporting checklist. Available at http://dx.doi.org/10.21037/jtd-20-1101

Ethical Statement: The authors are accountable for all aspects of the work in ensuring that questions related to the accuracy or integrity of any part of the work are appropriately investigated and resolved. This study was a single-center, non-randomized, historically controlled trial. The study was conducted in accordance with the Declaration of Helsinki (as revised in 2013). This study was reviewed and approved by the Ethics Committee in Zhongshan Hospital of Fudan University (approval NO: 2017-120) and was conducted in full compliance with its policies and procedures. All patients enrolled completed the informed consent form.