Unexpected intrathoracic adhesions are relatively uncommon complications of thoracic surgery. Severe adhesion can reduce the working space for the surgeon, leading to increased operative time and greater risks of complications and organ injury (1-3). Video-assisted thoracoscopic surgery (VATS) is an approach that may offer a solution to these issues during thoracotomy. In addition to alleviating the stress on the surgeon and other staff, it may improve operative times and patient safety (4-6). These lines of evidence suggest that preoperative prediction of intrathoracic adhesions is important to plan the surgical approach and to implement appropriate safety management.

In standard practice, intrathoracic adhesions are empirically predicted from X-ray data and past surgical history, while chest-wall invasion of lung cancer can be effectively evaluated using ultrasonography and cine magnetic resonance imaging (MRI) (7-10), based on changes in lung respiration. The presence of the lung respiratory changes can be evaluated as the “sliding lung sign” by chest ultrasonography (Figure 1) (11); it has been reported to be useful not only for evaluating pleural effusions and chest wall invasion (7,9,10,12,13), but also for evaluating the development of pneumothorax, diagnosing interstitial lung disease, acute respiratory failure, guiding lung biopsy, for endotracheal tube placement, and for planning pleurodesis (11,14-18). We believe that the sliding lung sign might also predict intrathoracic adhesion. Several studies have reported the utility of ultrasonography for determining intrathoracic adhesions (18-22). However, they were mainly retrospective studies, with limited representation of adhesion characteristics and comparisons with factors such as restrictive lung disorder, blunting of the costophrenic (CP) angle, computed tomography (CT) findings, past medical history, as well as small sample sizes. There was also little information regarding perioperative variables. 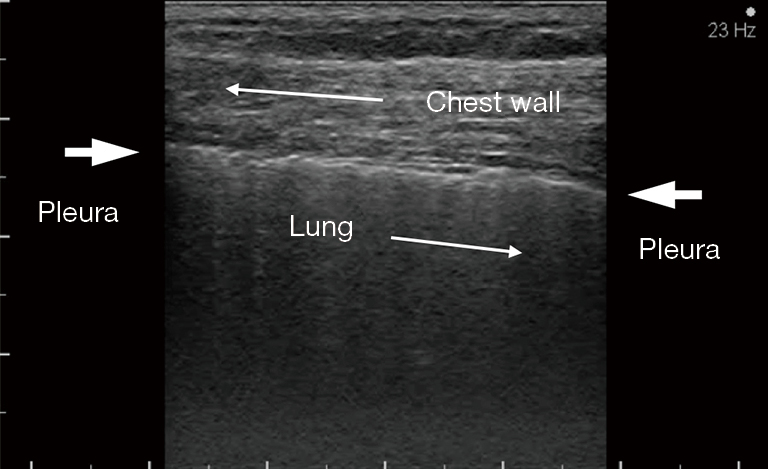 Figure 1 Representative ultrasound image of the sliding lung sign. The chest wall structures move in the opposite direction to the lung.

The present prospective, observational study investigated the utility of the sliding lung sign to preoperatively predict intrathoracic severe adhesion, and compared the outcomes with those of other modalities. We also measured the risks of postoperative complications and the factors predictive of severe intrathoracic adhesions.

We present the following article in accordance with the STROBE reporting checklist (available at ).

This was a single center, prospective, observational study (UMIN 000039054). The study was conducted in accordance with the Declaration of Helsinki (as revised in 2013). The study and all its protocols were approved by the Ethics Committee of the Joetsu General Hospital (J-70). All patients provided written informed consent. We included all patients aged 20–89 years who were admitted to Joetsu General Hospital (Joetsu, Niigata, Japan) for elective thoracic surgery between April 2013 and December 2015. Exclusion criteria were as follows: pneumothorax, hydrothorax, hemothorax, pyothorax, chylothorax, age of ≤19 or ≥90 years, median sternotomy, psychiatric disorders that inhibited participation, and inappropriate participation. Participants with histories of thoracic surgery were included.

Chest ultrasound sonography was performed at our outpatient clinic prior to surgery. The presence of the sliding lung sign was determined using B-mode imaging on each intercostal space of the chest (Figure 1). The movement of the visceral pleural slide were measured uniformly from the front to the lateral and the back side during exaggerated respiration. The evaluations in the upper side were difficult due to the narrower intercostal space and the scapula. Therefore, measurements in the upper side were performed within the observable range. A linear-type ultrasound probe (7.5 MHz) was used with a Prosound α7 scanner (Hitachi-Aloka medical, Ltd. Tokyo, Japan). Chest ultrasound sonography was mainly performed by the chief surgeon, who evaluated all data.

Severe intrathoracic adhesion was defined as the need for adhesiolysis requiring more than 30 minutes. Operative data were also recorded in detail in video and anesthesia chart formats.

A prospective sample size were calculated based on the previous studies (18-22). We expected to include 30% patients with intrathoracic adhesions in this study. Considering a statistical power of 80% and a significant level of 5% (2-sided), the sample size was estimated to be 152 patients. Expecting a dropout rate of 10%, we initially aimed to recruit 167 patients.

Risk factors included in multivariate analyses were selected on the basis of univariate analysis, statistical independence, and clinical significance. Multivariate logistic regression was used to identify independent risk factors of severe intrathoracic adhesions. Nominal logistic regression was initially performed with variables found to be significant univariate predictors of the outcome being modeled. Because of the rarity of the outcome events being modeled, variables identified in this step with a P-value cutoff of 0.1 were taken as candidates for multivariate logistic regression models.

The prognostic value of intrathoracic severe adhesion was evaluated using receiver operating characteristic (ROC) analysis. For ROC curve analysis, the sensitivity, specificity, positive predictive value (PPV), negative predictive value (NPV), and diagnostic accuracy were used to predict the outcome in the data set. The method of Hanley et al. was used to calculate the area under curve (AUC) for the index (25,26).

In total, 269 patients were assessed for eligibility, 101 of whom were excluded after the application of exclusion criteria. A total of 168 patients consented to participate and were enrolled. No patient withdrew from the study (Figure 2). Table 1 details the characteristics of the study population. The degree of severe adhesion was divided into hard (such as “stuck”) or soft (such as “spider web”) adhesion, and the former was more prevalent. All 15 patients without sliding lung sign had hard severe adhesions (specificity 100%) (Figure 3A). In this series, the sensitivity, PPV, and NPV of the sliding lung sign were 88.2%, 100%, and 98.7%, respectively. There were two false-negative results, both of which were soft adhesions (Figure 3B). 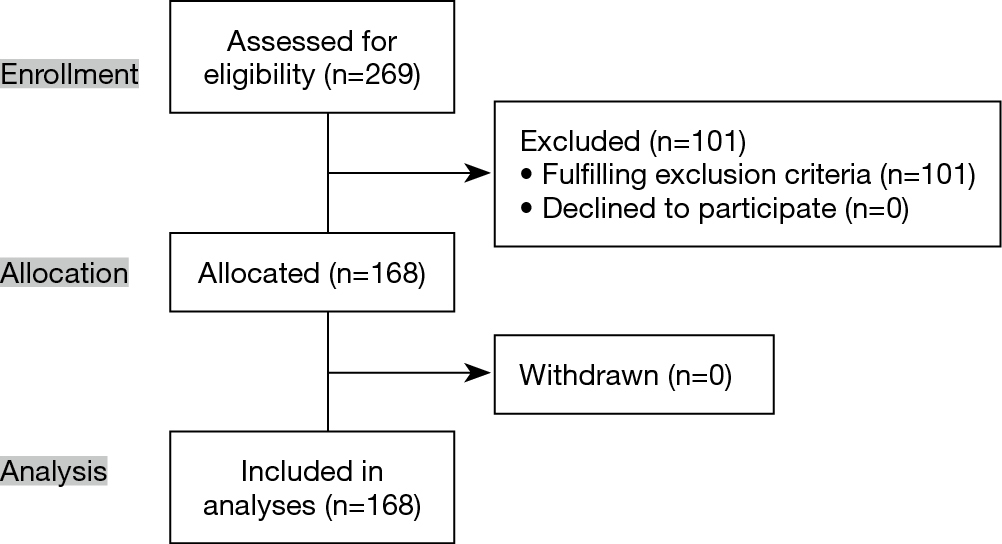 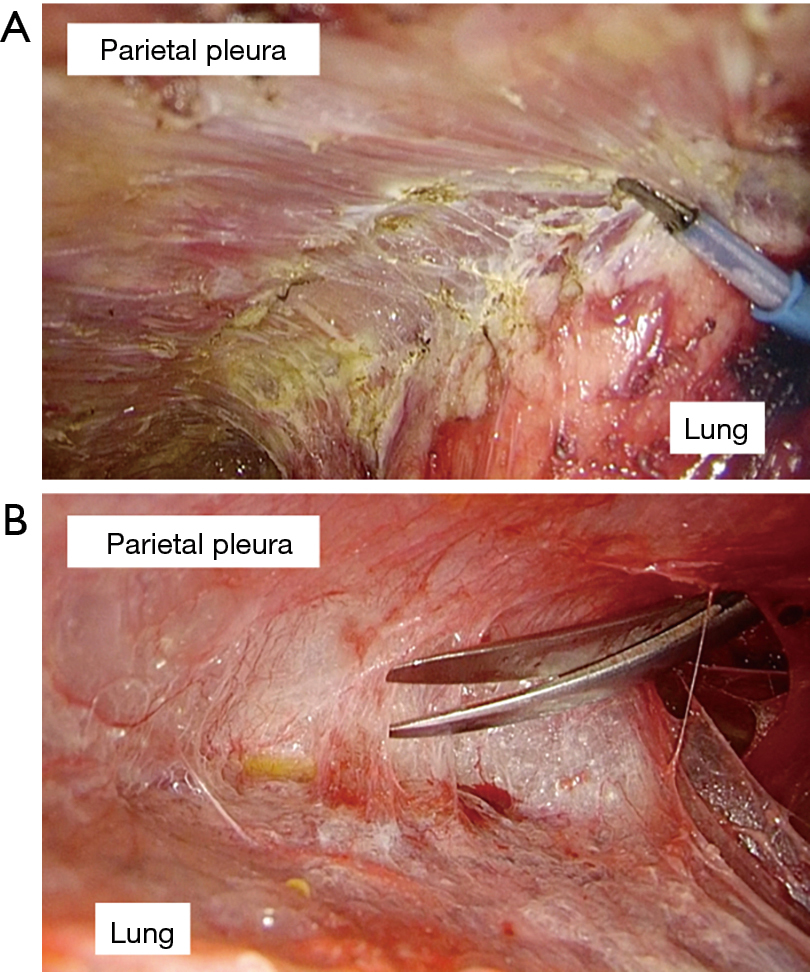 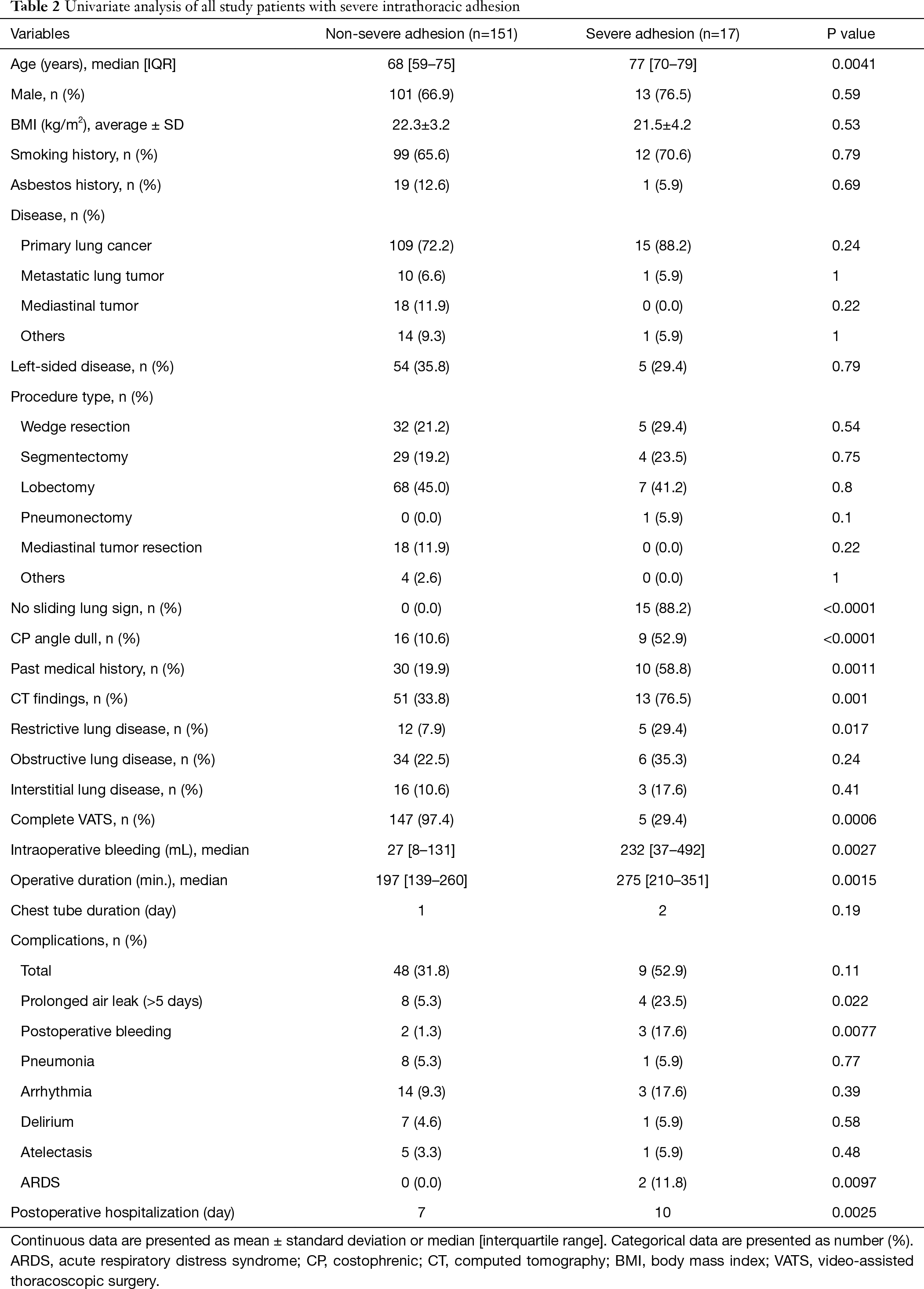 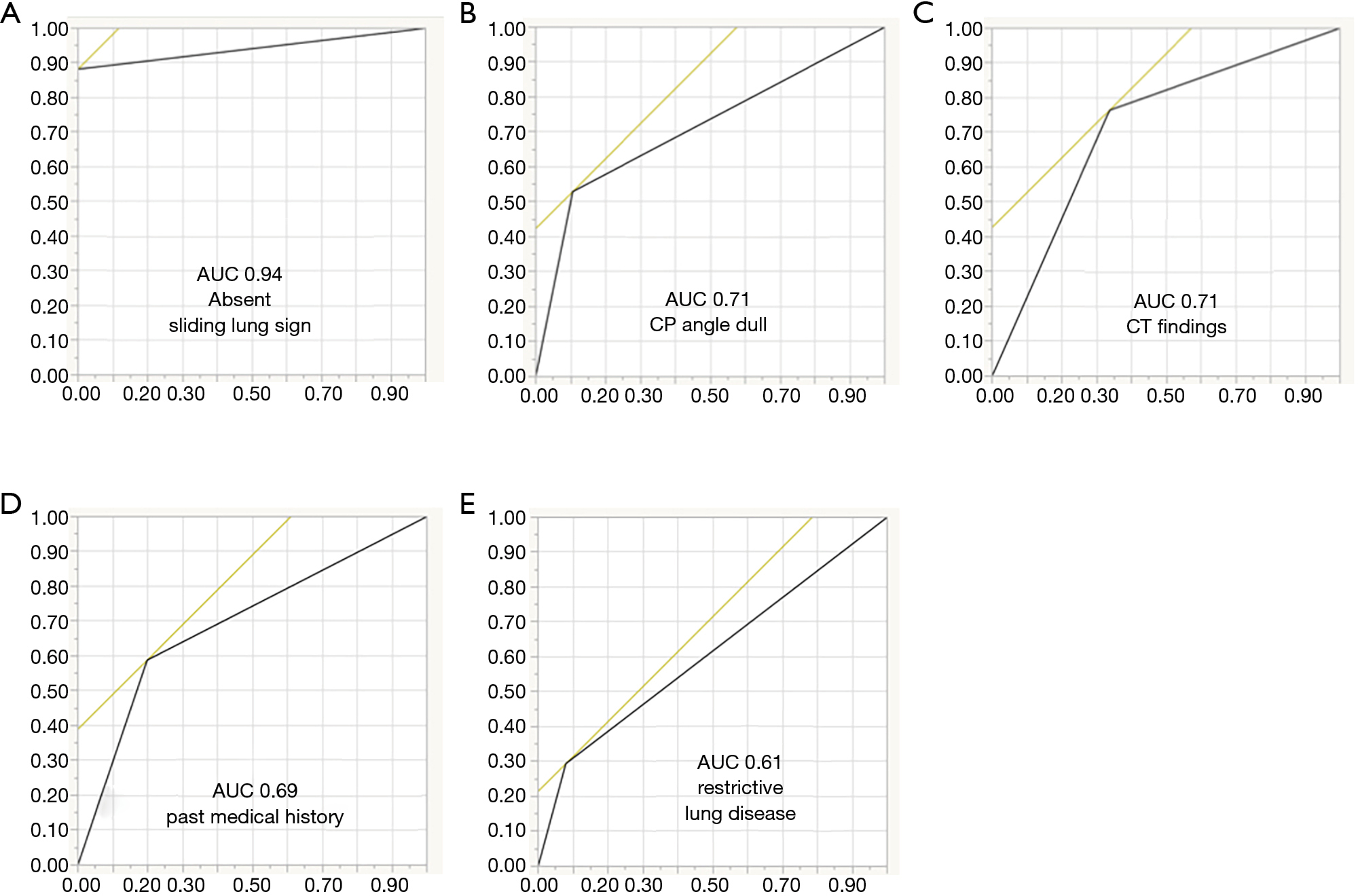 Predicting severe intrathoracic adhesions before surgery has many advantages. It enables appropriate decision-making with respect to surgical approach, safe installation of the first port, appropriate time-management of the surgery, and assessment of the risk of complications. In the case of emergency surgery, it is possible that the surgeon and staff will be under psychological stress, possibly inhibiting decision-making (27,28). Therefore, it is critically important that all medical staff as well as surgeons and assistants be adequately prepared. If a patient has severe adhesions, the appropriate treatment would be to use a minimal thoracotomy approach. However, if uniportal VATS or robot-assisted thoracoscopic surgery are required, the approach may need to be reconsidered. In the present study, severe intrathoracic adhesions were significantly associated with thoracotomy conversion, more bleeding, longer operative time, increased postoperative complications, and longer postoperative hospital stays.

Previous studies have reported the sliding lung sign to be an effective indicator of tumor chest-wall invasion (7,9,10). Pulmonary respiratory changes can be detected by ultrasonography, as well as by MRI (8); however, ultrasonography has the advantages that it is a low-cost approach that involves no radiation exposure; it minimizes distress to the patient in terms of invasive or claustrophobia procedures; it can be carried out anytime, anywhere, and with any number of scans; and it produces data that are easy to evaluate. The understanding of the sliding lung sign is easy once you see it, and everyone can immediately practice and evaluate it quite precisely (29). However, evaluation of adhesions of the hilum, mediastinum, and apex are difficult using ultrasonography. For these sites, cine MRI may be more suitable. Vascular sheath adhesions, by contrast, may be difficult to evaluate using any modality.

We analyzed two cases of severe intrathoracic adhesion that exhibited the sliding lung sign. These were both cases of soft adhesion, and therefore ultrasonography did not detect adhesions; CT findings, presence of restrictive lung disorder, and past medical history were also negative. Two cases were not peripheral tumor, and clinical and pathological T1b. The pathology-related adhesions was considered negative. However, blunting of the CP angle was observed in both, suggesting that this may be used to detect soft adhesions that cannot be detected by the ultrasonography, thereby compensating for the limitations of ultrasound.

In the field of abdominal surgery, the prevention of adhesion has been a key area of research and development (1-3). In thoracic surgery, aspirin has been reported to reduce postoperative pleural adhesions by inhibiting the expression of platelet-derived growth factor (30). However, prolonged air leaks are a common complication of thoracic surgery. Intrathoracic adhesions have been reported to effectively prevent prolonged air leaks, and pneumothorax can be cured or prevented from recurring using pleurodesis (18). The development of a material that can create specific adhesions of the visceral pleura without any restrictive disorders would be beneficial to the field.

The present study has several limitations that should be acknowledged. As a single-center study with a limited number of consecutive cases, the generalizability of the results may be limited. Furthermore, the definition of severe intrathoracic adhesion represents a limitation because the operative duration may be affected by the particular surgeon or staff team. However, the chief surgeon participated in all surgeries and controlled them. Furthermore, data of past medical history may not be accurate because of the interview-style data collection. Nevertheless, this was a prospective study, and all surgical and echography procedures were overseen by the chief surgeon.

The ultrasound sliding lung sign could be used to detect severe intrathoracic adhesions prior to surgery. Preoperative evaluation of ultrasound data may therefore inform clinical decision-making with respect to appropriate surgical plans. Ultrasound examination may be insufficient for the detection of soft adhesions; in these cases, evaluation of the CP angle may provide useful complemented information. These findings suggest that both the ultrasound sliding lung sign and the CP angle should be confirmed prior to surgical decision-making.

Reporting Checklist: The authors have completed the STROBE reporting checklist. Available at http://dx.doi.org/10.21037/jtd-20-886

Conflicts of Interest: All authors have completed the ICMJE uniform disclosure form (available at http://dx.doi.org/10.21037/jtd-20-886). The authors have no conflicts of interest to declare.

Ethical Statement: The authors are accountable for all aspects of the work in ensuring that questions related to the accuracy or integrity of any part of the work are appropriately investigated and resolved. The study was conducted in accordance with the Declaration of Helsinki (as revised in 2013). The study and all its protocols were approved by the Ethics Committee of the Joetsu General Hospital (J-70). All patients provided written informed consent.