Aortic arch disease combined with Kommerell’s diverticulum is a rare but problematic condition. The distinct arch configuration and supra-arch vessel distribution are the main differences from other types and is critical to deal with Kommerell’s diverticulum. It is primarily defined as the dilation of initial segment of aberrant subclavian artery (ASA) (1). Several types of arch locations and corresponding supra-arch arteries arrangements were described in the literatures (2-4). There are different therapeutic modalities and so the paradigm used for treatment in our center in the recent 4 years was summarized and discussed. We present the following article in accordance with the STROBE reporting checklist (available at http://dx.doi.org/10.21037/jtd-20-1602).

The clinical data of patients diagnosed with aortic arch disease and Kommerell’s diverticulum and those who underwent operation in our hospital from 2015 to 2019 were retrospectively analyzed. The study was conducted in accordance with the Declaration of Helsinki (as revised in 2013). The study was approved by institutional ethics committee (No. 2018-1094) and informed consent was taken from all the patients. A total of nine patients were included. Kommerell’s diverticulum was diagnosed according to the criteria proposed by previous study (3). The aortic arch is considered hypoplastic if the diameter is less than 50% than that of the ascending aorta (aAO). The sequence of supra-arch arteries arising from the right-sided aortic arch was found in seven patients, which was as follows: left common carotid artery (LCCA), right common carotid artery (RCCA), right subclavian artery (RSA) and aberrant left subclavian artery (ALSA). And the sequence corresponding to left-sided aortic arch in two patients was RCCA-LCCA-left subclavian artery (LSA)-aberrant right subclavian artery (ARSA). Five patients had chest pain and back pain, while the remaining had no symptoms.

The indication of operation for true aneurysm in our center was considered by two aspects: the symptom and the size. The patient with the symptom of tracheal or/and esophageal compression requires operation. If the patient had no symptom, then the aortic arch requires replacement when its diameter was more than 50 mm. When the diameter of the diverticular orifice was more than 30 mm or the maximum diameter of descending thoracic aorta (DTA) near the diverticulum was more than 50 mm, then DTA interference is required. The method of measuring the diverticulum and DTA was shown in Figure 1. The general data of all patients was demonstrated in Table 1. 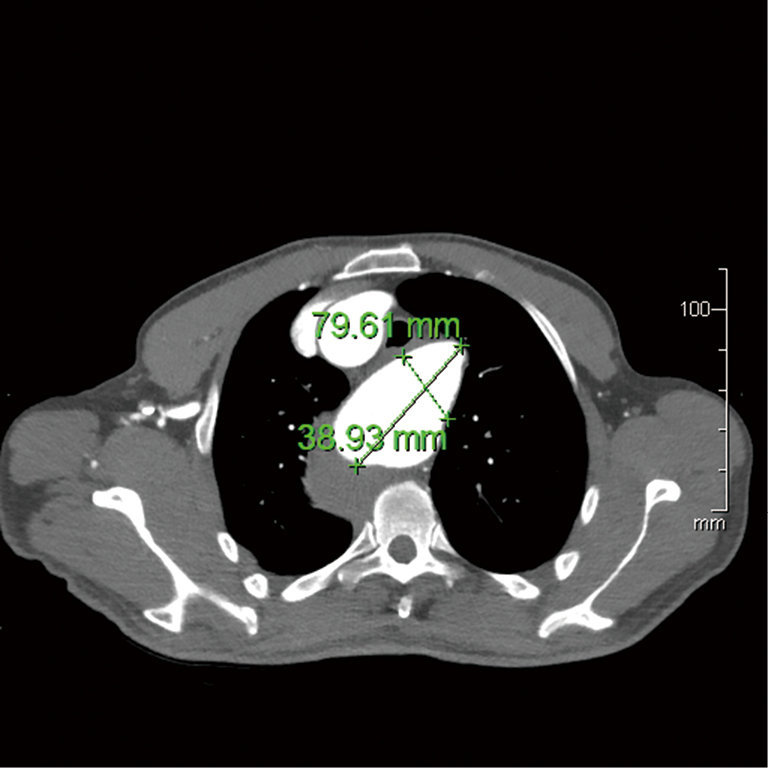 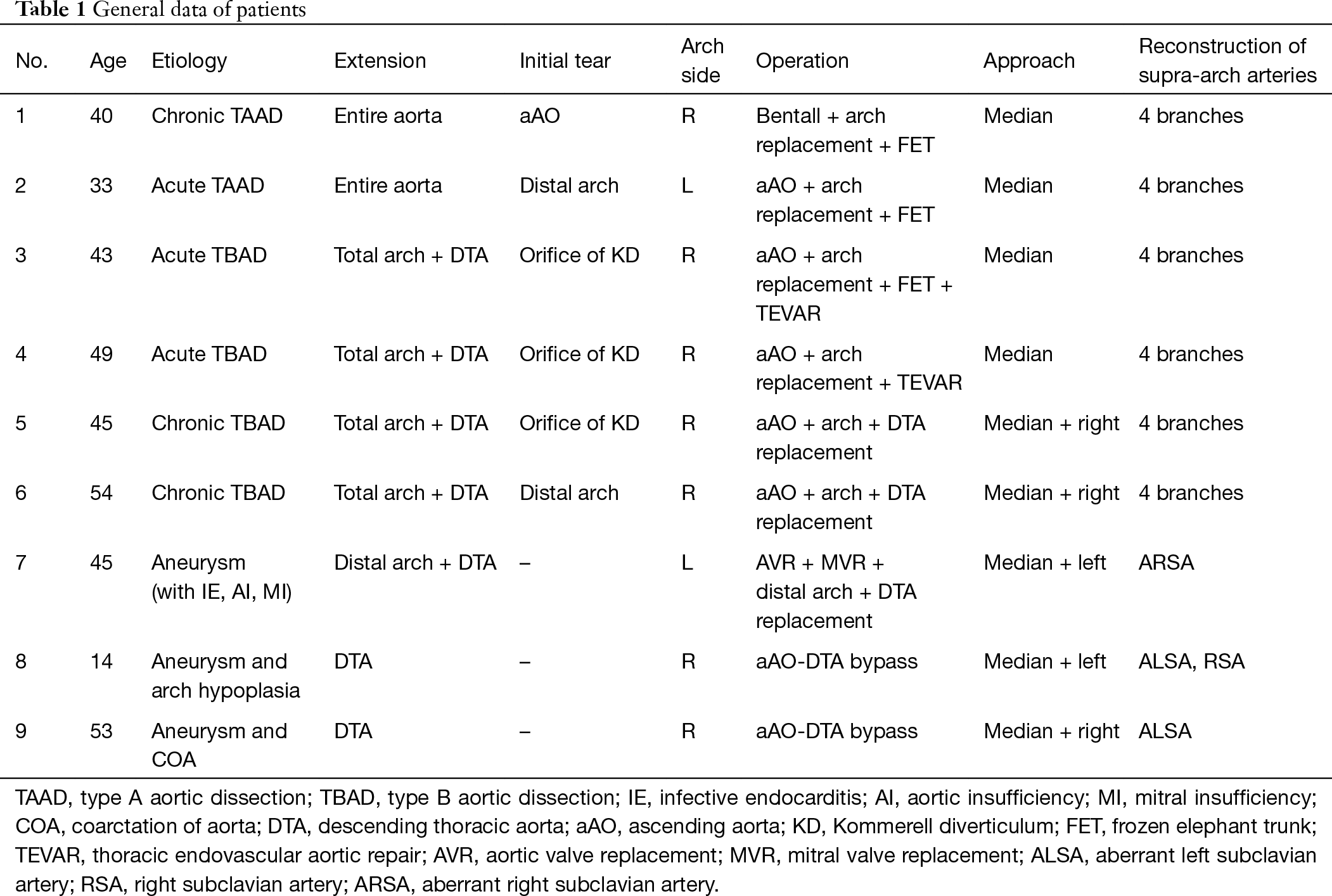 Due to different types and extent of lesions, all the nine patients received different operations, which were described as follows:

The first four patients had aortic arch replacement through median sternotomy with different stent implantations into the DTA. Femoral artery was selected in these patients as the initial cannulation site and the right atrial cannulation was used routinely to establish cardiopulmonary bypass (CPB). Hypothermia cardiac arrest (HCA) and selective cerebral perfusion (SCP) were used for open distal anastomosis. The lowest nasopharyngeal temperature should be 25 °C and SCP was achieved by extra LCCA cannulation with a flow rate of 5–10 mL/kg/min.

For patients 5 and 6, double incisions (median and lateral thoracotomies) and “arch first” techniques described by Kouchoukos previously (5) were used for graft replacement from aAO to DTA. aAO was initially selected for cannulation. A 4-branched vascular graft was filled with blood by cannulating and perfusing one of the branches and clamping other outlets of the graft. Debranching of supra-arch arteries was finished by other branches of the graft. The DTA was then clamped and sewn with one end of the graft which was delivered to pleural cavity through median incision. Finally, the aAO was resected and its proximal stump was anastomosed with the graft after cardioplegia injection.

For patient 7, intracardiac operation was performed through median thoracotomy. The distal arch and the upper DTA (till level 6 of the thoracic vertebral body) were replaced with straight graft by clamping and sewing through left thoracotomy.

For patients 8 and 9, clamping of the distal arch to resect the coarctation remained difficult, and so a bypass from aAO to DTA was made through double incisions. The distal DTA was clamped and anastomosed with a straight graft initially in both the patients. The proximal DTA was resected and the distal arch was closed by continuous suturing. The proximal end of the graft was then anastomosed with aAO by end-to-side anastomosis. The image of bypass from aAO to DTA using computed tomography (CT) three-dimensional reconstruction was shown in Figure 2. 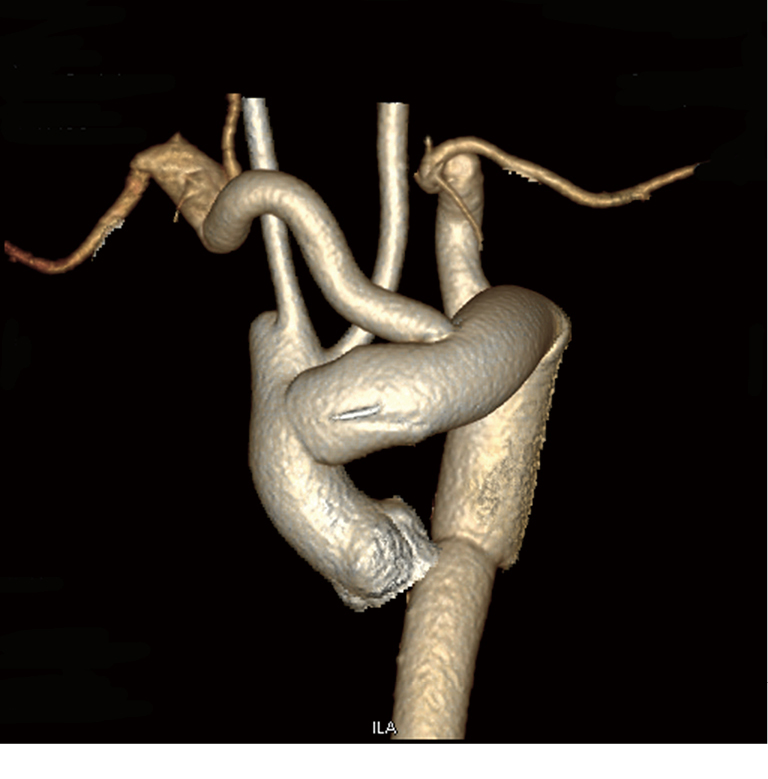 For the first six patients, all the supra-arch arteries were reconstructed, and the last three patients underwent ASA reconstruction in the chest. Patient 9 has accepted RSA reconstruction due to right subclavian aneurysm.

The median age of the patients (eight males and one female) was 45 (from 14 to 54) years. The mean CPB time was 169.9±84.1 [142–253] minutes. The mean duration of myocardial ischemia was 73.0±41.9 [17–133] minutes. The median HCA time was 18 [13–28] minutes. The median mechanical ventilation time and ICU stay was 29 [6–485] hours and 4 [1–27] days. The 30-day mortality was 11.1% (1 patient). Patient 4 died due to refractory respiratory and circulatory failure on day 17 because of crippling bronchial compression found by bronchofibroscope after re-intubation. Patient 5 had myasthenia of limbs and respiratory muscle postoperatively and was depended on mechanical ventilation. Critical illness polyneuropathy was confirmed by a neurologist who suggested neurotrophic treatment. He successfully detached from the respirator after 485 hours.

Patient 3 had dry cough and gained remission 1 week later. A slight compression of tracheal carina was observed on CT scan.

In our study, there were more cases who suffered from aortic dissection. As reported in the literature (6,9-11), patients with acute aortic dissection involving entire arch should accept emergency operation and total arch replacement regardless of classification. In our center, these patients were treated in the similar way with total arch replacement plus FET or endovascular stent or both. Although TEVAR could be an appropriate choice for type B aortic dissection (TBAD) coupled with Kommerell diverticulum (KD) (12-15), open surgery could not be abandoned (11,16). The indication of operation for chronic aortic dissection remained the same as that of true aneurysm and graft replacement was considered as a better choice in our opinion. The replacement of DTA might be considered as a better choice if only distal arch was involved by dissection.

A more extensive arch replacement for aortic dissection involving entire arch was recommended in order to achieve better long-term results but the importance of dealing with Kommerell’s diverticulum accurately should be considered. Isolation of diverticulum by stent graft was preferred and how to select the stent depends on the location of initial tear and size of KD. A proximal intimal tear from aAO or arch and a small diverticulum indicated that FET is enough. But a distally located intimal tear from DTA and a larger orifice of the diverticulum (more than 30 mm) are difficult for occlusion by single FET. So, another endovascular stent graft anchoring to FET or a single longer FET with a length of 150 mm or more is warranted (6,10,17).

A vascular ring surrounding the trachea and esophagus is formed by ALSA and ligamentum arteriosum when the arch is right-sided. The structures inside the vascular ring might be compressed by the dilation of diverticulum. Delivering of FET or endovascular stent graft might still worsen the condition. As mentioned above, patient 4 was considered as an unsuccessful case due to lethal airway compression caused by inappropriate stenting. Patient 3 also had compression of trachea after FET and endovascular stent graft implantation. Maybe a soft elephant trunk continued by stent grafting is the preferred choice in such patients. TEVAR as a re-intervention following FET in the first operation was reported by van Bogerijen and colleagues (18). In our study, patient 1 had false lumen dilation of downstream DTA due to secondary tears after single FET implantation and TEVAR has successfully isolated the lesions.

We believed that arch hypoplasia and coarctation of the aorta have no concern with KD in the last two cases and the two types of problems should be solved simultaneously. Median incisions were made for the convenience of proximal anastomosis.

Our study is only a summary of experiences from varied cases. More experiences are warranted to improve the choice of therapeutic strategies.

Treatment of arch lesions associated with Kommerell’s diverticulum should follow corresponding indications and instructions. Open surgery is the preferred choice and detailed therapeutic strategy depends on the extension of aneurysm, classification and stage of dissection. For patients with right-sided arch and larger Kommerell’s diverticulum, airway is prone to compression when FET or endovascular stent is used, and so elephant trunk for landing zone or graft replacement might be a better choice for these. ASA requires reconstruction.

Reporting Checklist: The authors have completed the STROBE reporting checklist. Available at http://dx.doi.org/10.21037/jtd-20-1602

Conflicts of Interest: All authors have completed the ICMJE uniform disclosure form (available at http://dx.doi.org/10.21037/jtd-20-1602). The authors have no conflicts of interest to declare.

Ethical Statement: The authors are accountable for all aspects of the work in ensuring that questions related to the accuracy or integrity of any part of the work are appropriately investigated and resolved. The study was conducted in accordance with the Declaration of Helsinki (as revised in 2013). The study was approved by institutional ethics committee (No. 2018-1094) and informed consent was taken from all the patients.