Surgery is an important method for the treatment of heart valve disease, but some patients have chronic left ventricular dysfunction (LVD) after operation, which seriously affects the quality of life of patients and reduces long-term survival rate. Previous studies have shown that preoperative and intraoperative factors can lead to the occurrence of chronic LVD after heart valve surgery, but most of them are risk factor analysis of chronic LVD after homogeneous valve surgery (1,2). This study aimed to analysis the risk factors of postoperative chronic LVD after heart valve surgery. We present the following article in accordance with the STROBE reporting checklist (available at http://dx.doi.org/10.21037/jtd-20-1010).

A retrospective analysis of 860 patients who underwent heart valve surgery in our center from January 2017 to December 2018, including 650 males and 210 females, aged 58±5.8 years. Inclusion criteria: (I) the patient was clinically diagnosed with heart valve disease and met the surgical indications for mitral valve replacement (MVR), mitral valve repair (MVP), and aortic valve replacement (AVR) and double valve replacement (DVR); (II) if atrial fibrillation, coronary artery disease, and tricuspid regurgitation are combined before surgery, the same period of time can be achieved during the operation. Radiofrequency ablation, coronary bypass and tricuspid angioplasty were performed. Exclusion criteria: (I) preoperative LVEF <50%; (II) aortic dissection with Bentall and right heart valve replacement; (III) cardiopulmonary resuscitation and death during perioperative period and 6 months after operation; (IV) operation post-CRRT, IABP, or ECMO mechanical assistance; (V) postoperative cardiac dysfunction due to valvular dysfunction, perivalvular leak, or infective endocarditis. All patients were reviewed for color Doppler ultrasound at 30 days and 6 months after operation. Patients were divided into LVD group (LVEF <40%) and control group (LVEF ≥40%) according to LVEF at 6 months after operation.

Warfarin anticoagulation was taken after all simple valve surgery, including lifelong anticoagulation after mechanical valve, 6 months after biological valve and mitral valve angioplasty, and warfarin combined with aspirin anticoagulation after coronary bypass surgery. Patients undergoing radiofrequency ablation of atrial fibrillation during the operation were given amiodarone for 3 months to control the heart rate. Cardiac ultrasound was routinely followed up at 30 days and 6 months after the operation.

The retrospective study was approved by the Ethics Committee of Changhai Hospital affiliated to Naval Medical University (No. 20200219) and informed consent was taken from all the patients. The study was conformed to the provisions of the Declaration of Helsinki (as revised in 2013).

There were 126 cases in the LVD group and 734 cases in the control group. There was no significant difference in age, sex, smoking history, weight, preoperative hypertension, diabetes, and renal insufficiency between the two groups (P>0.05). There was a statistically significant difference in the combination of coronary artery disease, atrial fibrillation, pulmonary hypertension, and NYHA classification (P<0.05) (Table 1). 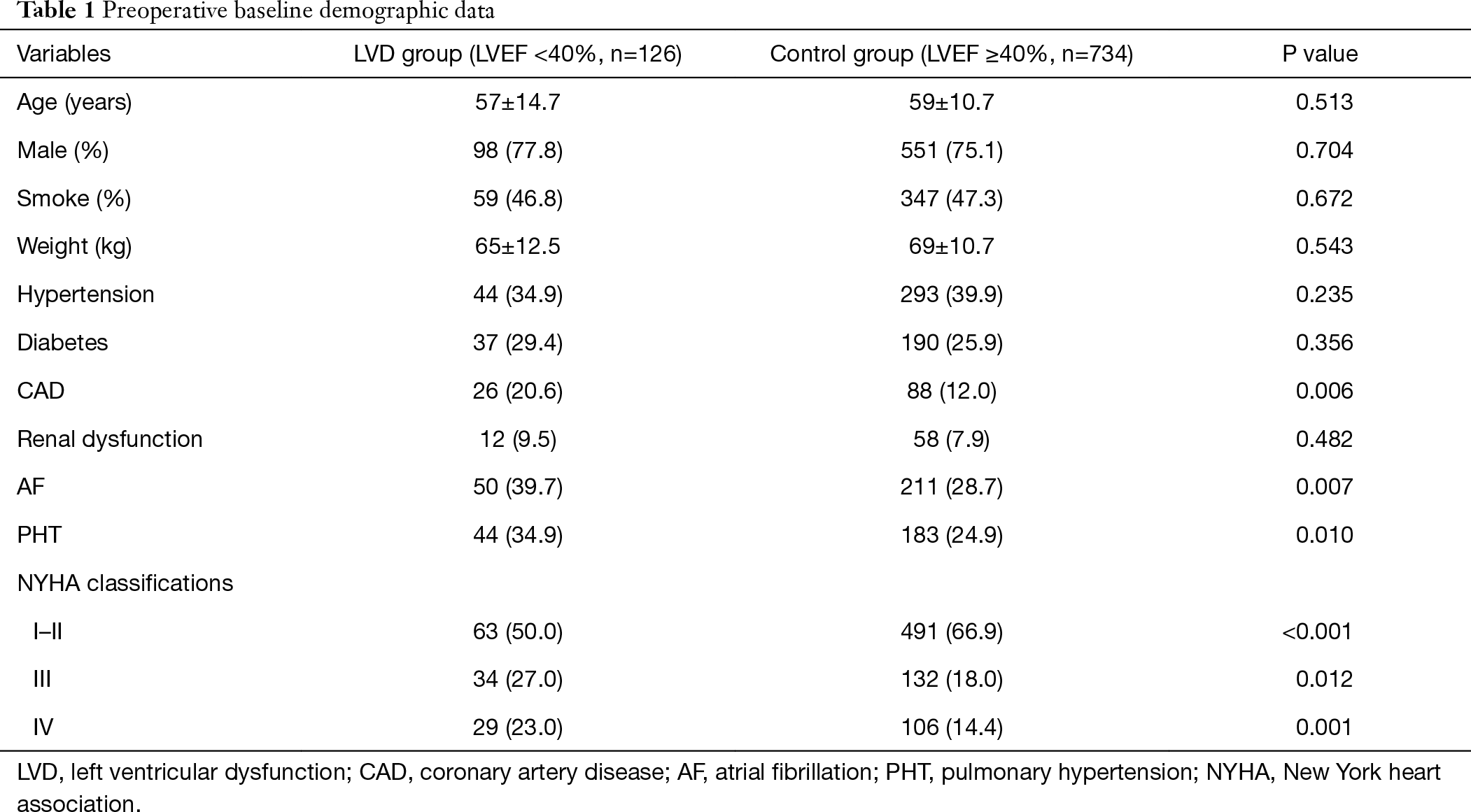 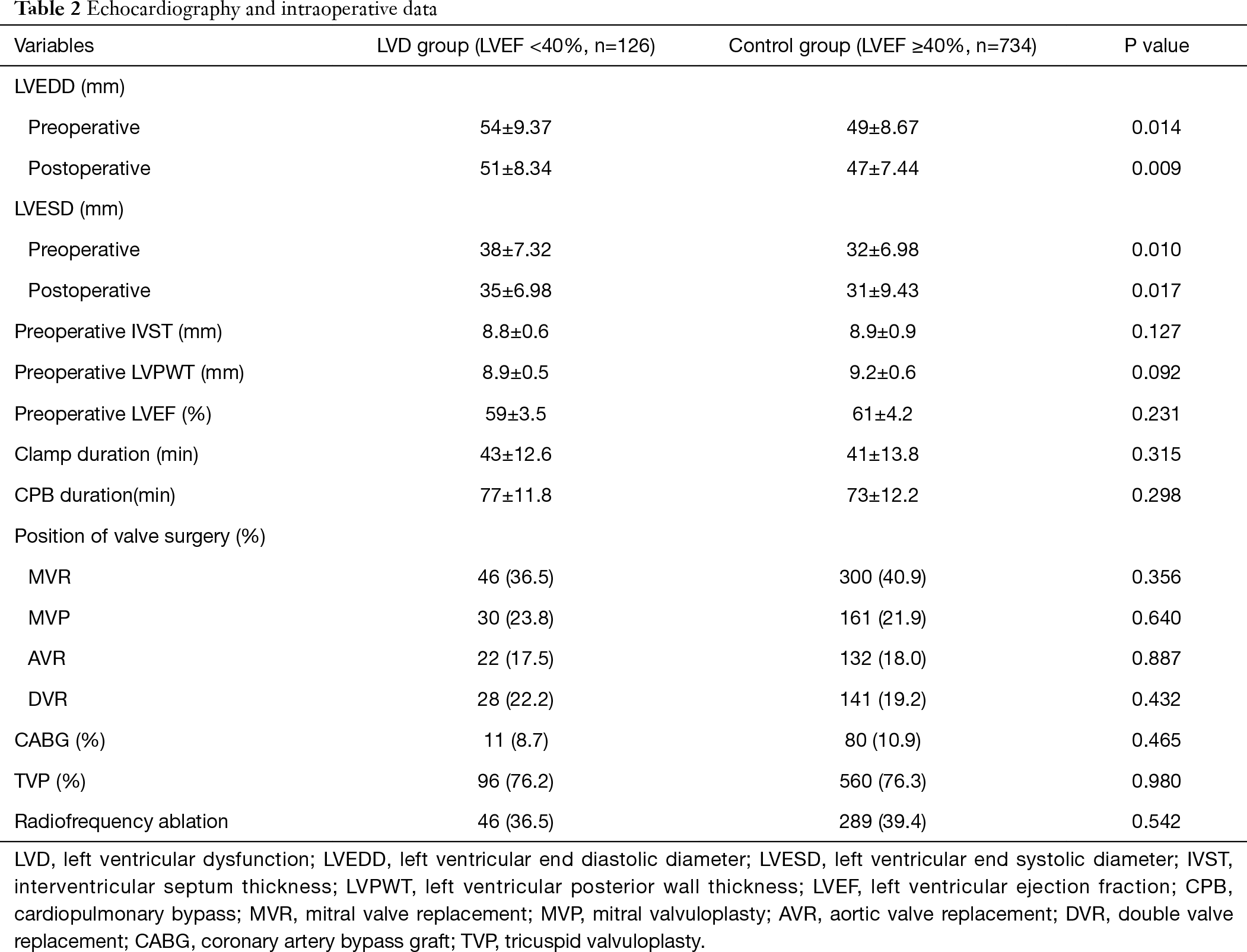 Pulmonary hypertension often indicates that the prevalence of valvular disease is severe (7), and the onset time is long. Although the left ventricular function of the patient is relieved after valve operation, continuous pulmonary hypertension damages the right ventricular function, and the reduction of left ventricular preload leads to a decrease in LVEF. Preoperative complications of coronary artery disease and NYHA grades III to IV indicate that there may be cardiac dysfunction before the ejection fraction retention, which is more susceptible to myocardial ischemia-reperfusion injury, and therefore LVD is more likely to occur after surgery.

Reporting Checklist: The authors have completed the STROBE reporting checklist. Available at http://dx.doi.org/10.21037/jtd-20-1010

Conflicts of Interest: All authors have completed the ICMJE uniform disclosure form (available at http://dx.doi.org/10.21037/jtd-20-1010). The authors have no conflicts of interest to declare.

Ethical Statement: The authors are accountable for all aspects of the work in ensuring that questions related to the accuracy or integrity of any part of the work are appropriately investigated and resolved. The retrospective study was approved by the Ethics Committee of Changhai Hospital affiliated to Naval Medical University (No. 20200219) and informed consent was taken from all the patients. The study was conformed to the provisions of the Declaration of Helsinki (as revised in 2013).