Prognosis of wide wedge resection in patients with stage IA1 and IA2 lung adenocarcinoma with total tumor size including the lepidic component greater than 2 cm: a single center retrospective study

The purpose of this study is to evaluate the prognosis of wide wedge resection in patients with stage IA1 and IA2 lung adenocarcinoma in which the total tumor size is greater than 2 cm. Therefore, this study seeks to determine whether the size of the lepidic component in lung adenocarcinoma can be ignored and sublobar resection can be performed based solely on the size of the invasive component. We present the following article in accordance with the Strengthening the Reporting of Observational Studies in Epidemiology (STROBE) reporting checklist (available at http://dx.doi.org/10.21037/jtd-20-1507).

From 2010 to 2018, 1,994 consecutive patients at a hospital in Korea were diagnosed with NSCLC and underwent curative surgery. Among those patients, 855 patients were diagnosed with stage IA1 and IA2 lung adenocarcinoma according to the eighth edition of the TNM staging system. Patients with incomplete resection or those who had preoperative chemotherapy were excluded. In this study, only stage IA1 and IA2 lung adenocarcinoma with total tumor size including lepidic component more than 2 cm were included. Total tumor sizes of all study patients were greater than 2 cm, but all of them were in stage IA1 and IA2 because the invasive component sizes were within 2 cm according to the eighth edition of the TNM staging system. The surgical procedures were either wide wedge resection or anatomical lobectomy. To reduce selection bias, all data were obtained from consecutive patient data. Finally, 180 consecutive patients were reviewed retrospectively. The patients were determined as stage IA1 or stage IA2, and their clinicopathological characteristics and prognosis were compared between the wedge resection group and the lobectomy group in patients with stage IA1 and stage IA2, respectively. The study was conducted in accordance with the Declaration of Helsinki (as revised in 2013). This study was approved by the institutional review board of Seoul St. Mary’s Hospital at the Catholic University of Korea and individual consent was waived (referral No.: KC20RISI0210).

Patients diagnosed with clinical stage I lung cancer on chest computed tomography (CT) and positron emission tomography/CT scan were eligible for surgical treatment. Tumor specimens were measured again by the pathologist to reclassify the pathologic T stage according to the eighth edition of the TNM classification (3), and the T stage was defined by the greatest dimension of the invasive component of the tumor (2). Total tumor size was defined as the maximal diameter of tumor including the lepidic component. Pathology reports were reviewed for tumor size, location, histologic tumor grade, lymph node status, and lymphovascular invasion. Lymphovascular invasion was defined as tumor cells microscopically observed in the lymphatic or vascular lumen.

Patients were grouped according to tumor stage and surgical procedure. Clinicopathological factors were compared using a Student’s t-test or the Wilcoxon rank sum test for continuous variables and chi-squared or Fisher exact test for categorical variables. The Kaplan-Meier method was used to analyze data collected from the interval between the time of operation and the time of the last follow-up visit. Recurrence-free survival (RFS) rates were estimated by the Kaplan-Meier method. Survival of each group was compared by log-rank test. A Cox proportional hazards model was used in a multivariate analysis to identify risk factors for recurrence after surgery. All variables with P<0.10 on univariate analysis were entered into the multivariate analysis. A P value of less than .05 was considered statistically significant. Statistical analysis was performed using SPSS version 24.0 software (IBM Corp, Armonk, NY, USA).

Stage IA1 cancer was diagnosed in 54 patients. Fourteen patients underwent wedge resection and 40 patients underwent anatomical lobectomy. Table 1 shows the comparison of clinicopathological characteristics between the wedge resection group and the lobectomy group. The clinicopathological variables were not statistically different between the two groups. In the surgical outcomes, the duration of postoperative chest drainage and the duration of hospital stay were shorter in the wedge resection group than in the lobectomy group. There was no postoperative mortality. 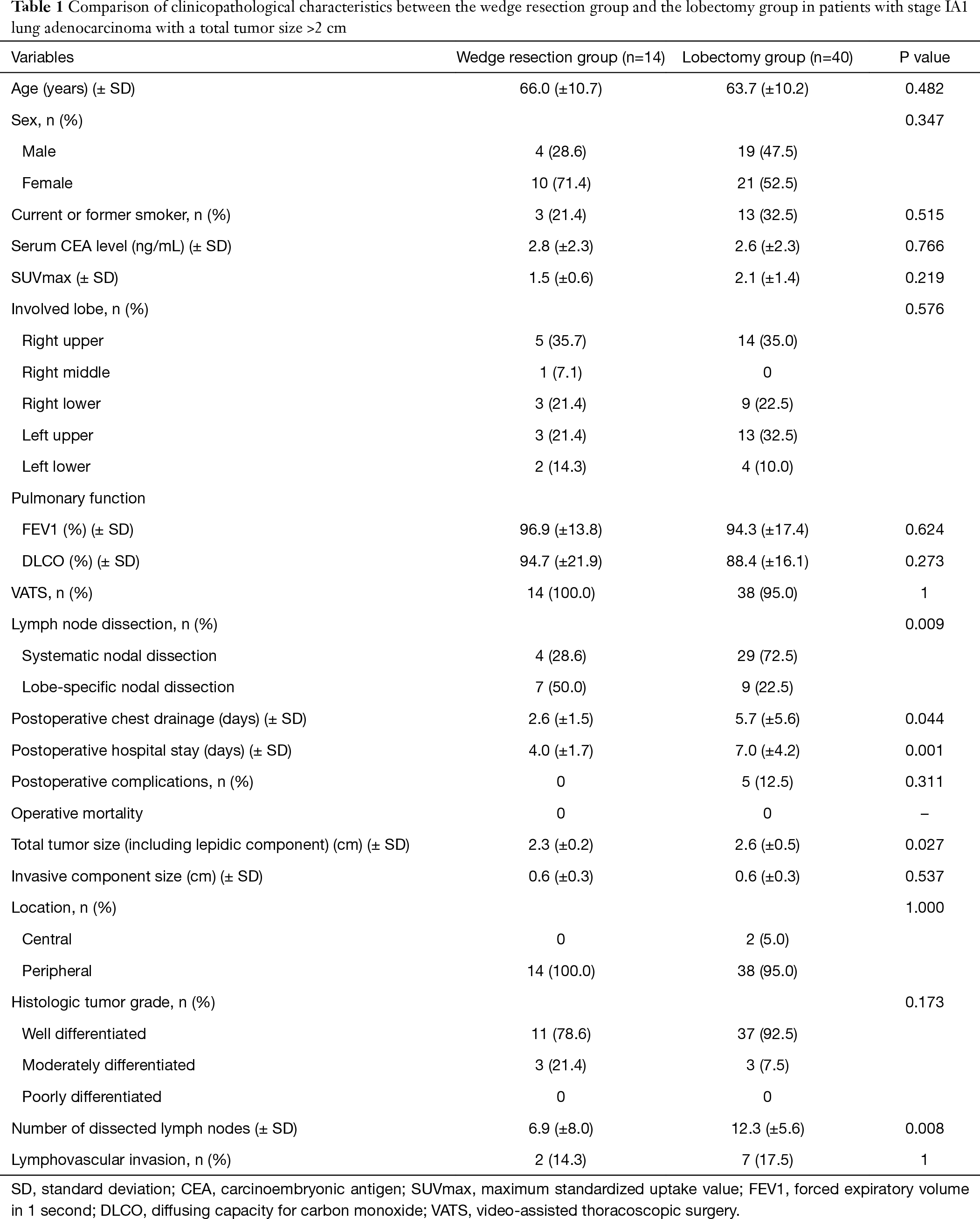 Stage IA2 was diagnosed in 126 patients. Sixteen patients underwent wedge resection and 110 patients underwent anatomical lobectomy. Table 3 shows the comparison of clinicopathological characteristics between the wedge resection group and the lobectomy group. There were no statistical differences in clinicopathological characteristics between the two groups. The duration of postoperative chest drainage was shorter in the wedge resection group than that in the lobectomy group. 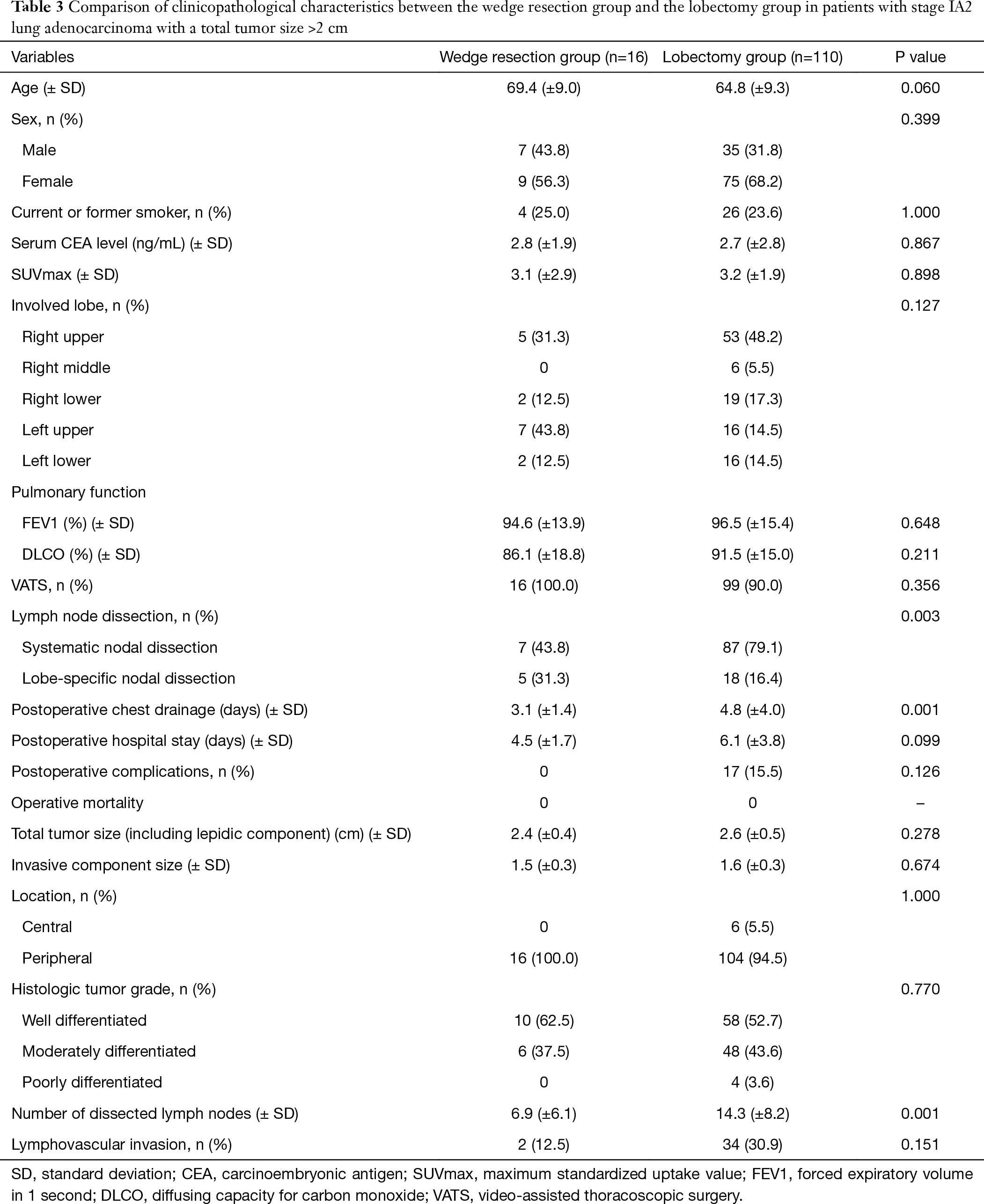 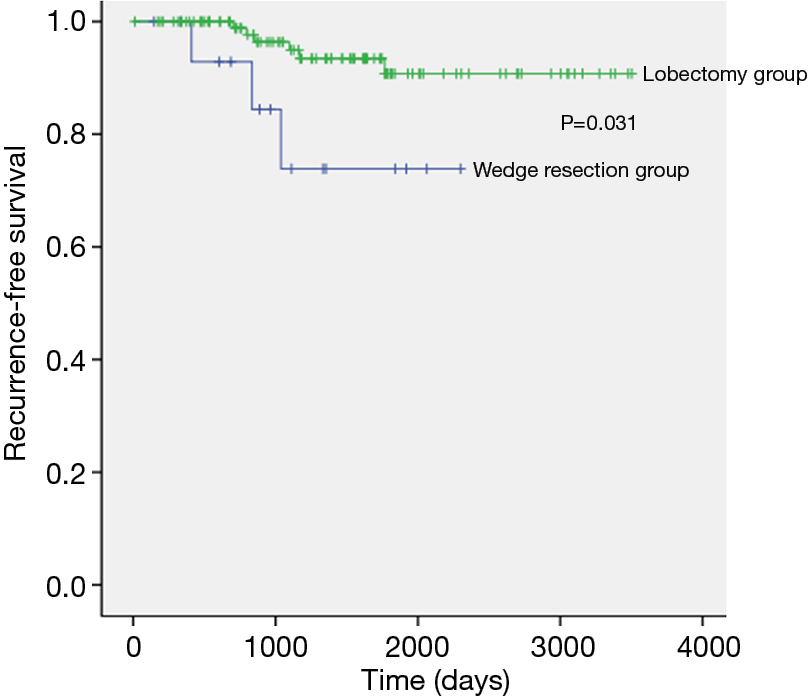 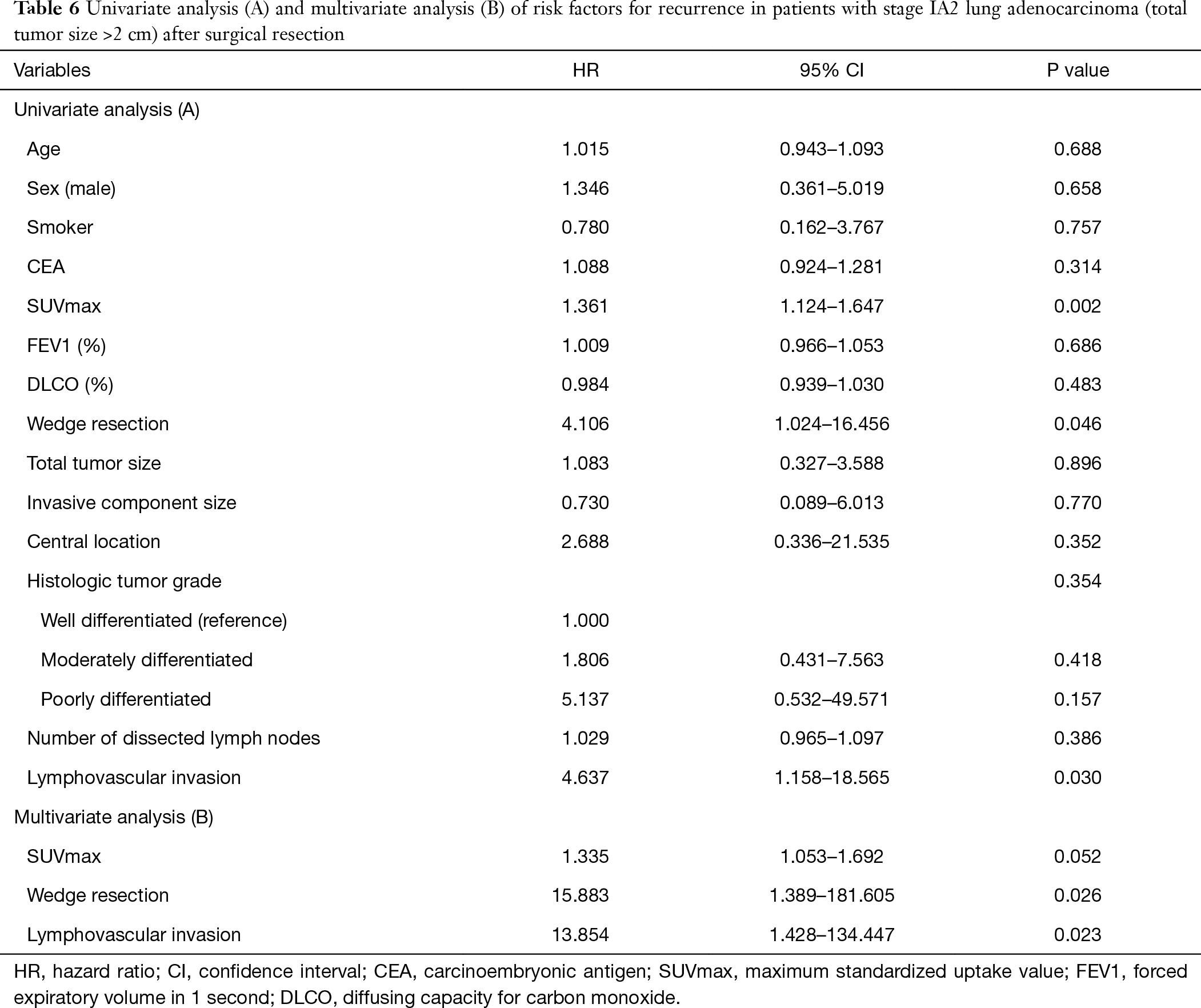 In this study, the sample size of the wedge resection groups was very small. Therefore, it is difficult to generalize the results. In the seventh edition of the TNM staging system, wedge resection was not generally recommended when total tumor size was greater than or equal to 2 cm because it was classified as T1b or higher. However, in the eighth edition, even if the total tumor size is larger than 2 cm, it is sometimes classified as T1a because of a small invasive component size. Therefore, it is necessary to re-evaluate the prognosis of wedge resection. This study was a retrospective study, and in the past, if the total tumor size was greater than 2 cm, wedge resection was rarely performed. As a result, sufficient samples could not be collected. Nevertheless, the results of this study are not meaningless because the sample size is such that wedge resection and lobectomy can be compared statistically. The purpose of this study is to become a baseline study of large-scale studies to be conducted in the future.

This study has a few limitations. First, it was a retrospective review. Second, we obtained data from a single institution, and the sample size was relatively small to generalize the results more reliably. However, the use of very detailed data was possible because of the comprehensive information stored in the electronic medical record. We retrieved data that thoroughly described the surgical procedures along with exhaustive data from pathologic specimens and pathologic reports. We believe that our data will be useful as the basis for future investigations. A prospective, randomized controlled study should be performed to validate our results. Third, this study used only the pathological stage, not the clinical stage. Whether to perform wedge resection or lobectomy before surgery is determined by the clinical stage. Therefore, it is true that research using the clinical stage is more helpful for actual clinical use. However, because the pathological stage is more accurate and has less variation, before conducting a study using the clinical stage, studies using the pathological stage must first be performed. This study was also conducted using the pathological stage, and further studies using the clinical stage will be conducted in the future. Finally, the follow-up period of the wedge resection group was relatively short. The median follow-up period of the stage IA2 wedge resection group was 35 months. The median follow-up period of the total patients was 45 months. In the future, it is expected that more accurate research results can be derived if more and longer follow-up data are accumulated.

Reporting Checklist: The authors have completed the STROBE reporting checklist. Available at http://dx.doi.org/10.21037/jtd-20-1507

Conflicts of Interest: All authors have completed the ICMJE uniform disclosure form (available at http://dx.doi.org/10.21037/jtd-20-1507). YM reports grants from National Research Foundation of Korea (NRF), during the conduct of the study. The other authors have no conflicts of interest to declare.

Ethical Statement: The authors are accountable for all aspects of the work in ensuring that questions related to the accuracy or integrity of any part of the work are appropriately investigated and resolved. The study was conducted in accordance with the Declaration of Helsinki (as revised in 2013). This study was approved by the institutional review board of Seoul St. Mary’s Hospital at the Catholic University of Korea and individual consent was waived (Referral number: KC20RISI0210).