Acute type A aortic dissection (ATAAD) is defined as the dissection that arises within the ascending aorta or aortic arch, according to Stanford’s classification, and occurs less than 14 days from the onset of symptoms (1). This condition is considered a surgical emergency because the mortality rate increases by approximately 1% for every hour of delay in surgical intervention. ATAAD is associated with high morbidity and mortality, given the surgical in-hospital mortality rate of 6.6–23.9% (2-7). Perioperative management of ATAAD is challenging due to urgent presentation, high risk of mortality, organ dysfunction, and the complexity of surgical management.

Postoperative mechanical ventilation is routinely used after cardiac surgery to minimize myocardial oxygen consumption and work of breathing from spontaneous ventilation. Nevertheless, delayed extubation may provoke adverse effects, including cardiopulmonary compromise, increased risk of pulmonary infection, patient discomfort from the endotracheal tube, increased intensive care unit (ICU) length of stay (LOS), and increased healthcare cost (8,9). Recently, fast track cardiac anesthesia has been introduced into clinical practice and has become increasingly adopted in many institutions. Early extubation within 6–8 hours after some certain cardiac surgeries can reduce the ICU LOS and healthcare costs (5,8,10). Moreover, it also increases the number of cardiac surgeries that can be performed (11). Unfortunately, early tracheal extubation after ATAAD surgery may not be feasible because of postoperative respiratory and ventricular dysfunctions following prolonged cardiopulmonary bypass (CPB), hemodynamic instability, abnormal hemostasis, hypothermia, bleeding, and postoperative complications. However, prolonged mechanical ventilation is associated with increased morbidity, mortality, and nosocomial infection (11). Pierre et al. reported a five-fold increase in mortality in patients with prolonged intubation time following cardiac surgery (12). Even though there is a reasonable amount of past literature available that reports the risk factors for delayed extubation after cardiac surgery, few studies particularly focused on patients who underwent ATAAD surgery (5,6,13). Therefore, this study aimed to elucidate the perioperative risk factors for delayed extubation in patients undergoing ATAAD surgery.

This retrospective cohort study was carried out at a tertiary university hospital from October 2004 to January 2018. The study was conducted in accordance with the Declaration of Helsinki (as revised in 2013). The Institutional Review Board (IRB) approved this study and the requirement for individual consent was waived (Si 159/2017). The study criteria included patients diagnosed with ATAAD who underwent emergency surgery. We excluded patients who had preoperative tracheostomy, or who died intraoperatively or within 48 hours after the operation. The medical records of 239 patients were obtained from the hospital electronic database.

All patients were admitted to the surgical cardiac ICU after surgery. Intermittent intravenous morphine was given as a standard analgesia protocol without other sedative medications during mechanical ventilation. A standardized weaning protocol was applied to all patients. Tracheal extubation was performed when patients were fully awake with adequate muscle strength and had normal temperature, stable hemodynamic, acceptable hemostasis, and adequate gas exchange and respiratory mechanics.

Delayed extubation was defined as the cumulative duration of mechanical ventilation of more than 48 hours postoperatively, starting from the cardiac ICU admission to the time in which patients were tracheally extubated. Patients who had an unsuccessful attempt of extubation with an accumulated duration of mechanical ventilation of at least 48 hours were also included. However, there is no standardized definition of delayed extubation following ATAAD surgery. Therefore, we adopted this current definition according to previously conducted studies (5,6,13) and our institutional experience.

A multivariate binary logistic regression, using a stepwise approach, was used to identify independent risk factors for delayed extubation. All continuous variables were transformed into categorical variables before the analysis. The cut-off was considered as the 50th percentile of the recorded values and clinically appropriate. Adjusted odd ratio (OR) and 95% confidence interval (95% CI) were used to determine the strength of the association.

Collinearity between variables was assessed by Pearson pairwise correlation coefficient and variance inflation factors (VIF) statistics; r>0.7 and VIF >0.5 are cut-off values for multicollinearity in the regression model (14). Consequently, the factors that indicated multicollinearity were removed from the model. The Hosmer-Lemeshow goodness-of-fit test was used to assess the validity of the regression model. Multiple imputation was performed with Markov chain Monte Carlo technique in order to alleviate the effect of missing data for variables in multivariate analysis. 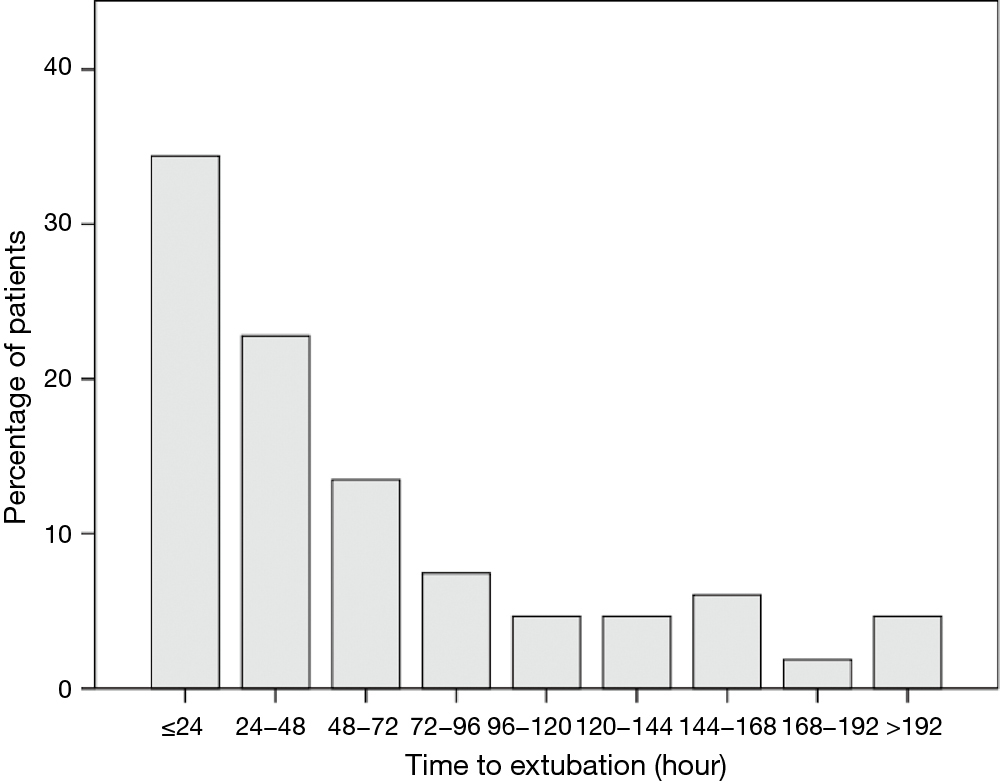 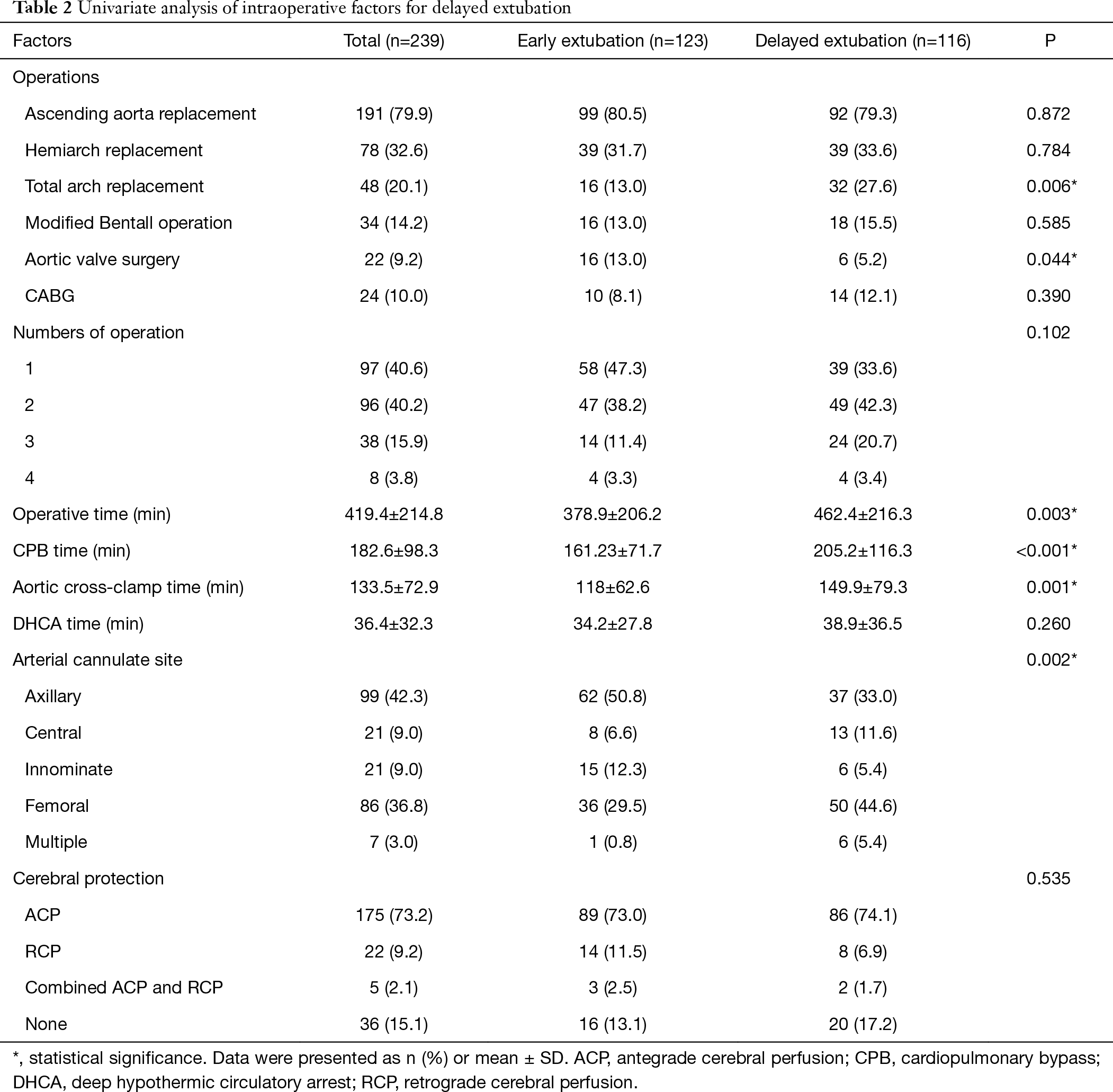 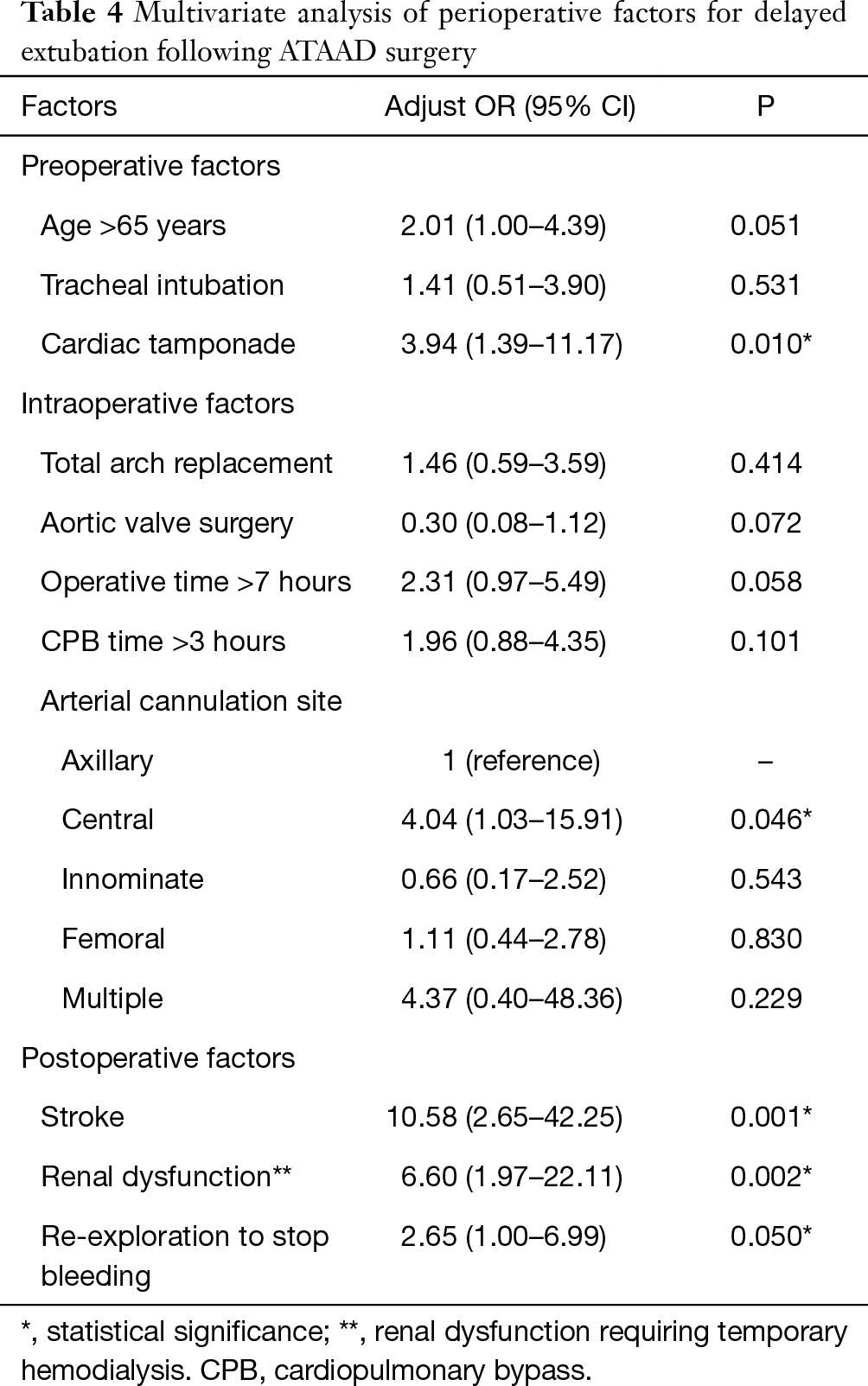 Postoperative outcomes are presented in Table 5. Tracheostomy was performed in 16 patients (4.7%) who could not be extubated at 6–22 days postoperatively. The timing of the tracheostomy was at the discretion of the attending cardiac surgeons. There was no incidence of deep sternal wound infection in any of the patients who had tracheostomy. The ICU and hospital LOS were significantly longer in delayed extubation group. The overall incidence of in-hospital mortality was 10.0% (n=24). The in-hospital mortality was observed only in patients who had delayed extubation.

Site of arterial cannulation for CPB was the only intraoperative factor associated with delayed extubation from a multivariate analysis. Central arterial cannulation for CPB was a significant predictor for delayed extubation in our study. According to the study by Rosinski et al., central cannulation was associated with a higher occurrence of stroke because it could potentiate the propagation of clot or embolization (17). As a result, it could be implied that patients might require prolonged mechanical ventilation due to postoperative stroke.

Prolonged operative time and CPB time were generally considered as risk factors for delayed extubation. Because prolonged CPB, in combination with intraoperative DHCA, hemorrhage, and massive transfusion, can activate the inflammatory cascade and further result in respiratory compromise (18). However, they were statistically significant factors as shown by univariate analysis but were not significant in multivariate analysis. This finding was consistent with previously published studies (5,13).

Postoperative complications are strong independent predictors for delayed extubation. Postoperative stroke was one of the risk factors with an incidence of 19%. This proportion is relatively higher than the previously reported incidence of 3–10% (5,13,19). Cerebral tissue hypoperfusion and emboli during CPB, as well as direct compromise of cerebral circulation are the possible mechanisms of stroke after ATAAD surgery.

This study had some limitations. First, some relevant data were missing because of the nature of retrospective study designs and the emergency treatment of ATAAD. For example, massive blood transfusion was evidently related to prolonged mechanical ventilation (20,21); unfortunately, we were unable to assess the exact volume of blood transfusion due to poorly collected data. Furthermore, the data of this study were collected from a single tertiary university hospital. The variation among institutions, in terms of anesthesia and surgical techniques, including the quality of postoperative care, may affect extubation outcomes. Because we included all patients who had ATAAD surgery consecutively during the study period, the onset of aortic dissection varied among individuals. The longer onset of symptoms is acknowledged as one of the risk factors for mortality after ATAAD; therefore, it might have affected the extubation time.

Funding: This study was supported by a research grant from Faculty of Medicine Siriraj Hospital, Mahidol University, Thailand.

Conflicts of Interest: All authors have completed the ICMJE uniform disclosure form (available at http://dx.doi.org/10.21037/jtd-20-742). The authors have no conflicts of interest to declare.

Ethical Statement: The authors are accountable for all aspects of the work in ensuring that questions related to the accuracy or integrity of any part of the work are appropriately investigated and resolved. The study was conducted in accordance with the Declaration of Helsinki (as revised in 2013). This study was approved by Siriraj Institutional Review Board with the exemption of individual consent (Si 159/2017).