Circulating tumor cells detected only after surgery for non-small cell lung cancer: is it a predictor of recurrence?

Peripheral circulating tumor cells (CTCs) can generate metastatic lesions (1), and it is important to control CTC shedding during surgical procedures, which can be achieved using the “no-touch isolation technique” (NTIT). A representative example of the NTIT surgery involves mesenteric vascular ligation for colorectal cancer, which Turnbull et al. reported was a superior treatment strategy in 1967 (2). Since that time, various reports have addressed the NTIT, including a recent prospective randomized trial (3). Thus, if CTCs are released during surgery, and if these cells predict metastasis and recurrence, it would be critical to determine whether CTCs are truly controlled during surgery. Although several reported cases have revealed that perioperative CTC detection predicts a poor prognosis for lung cancer (4-7), we are not aware of any studies that evaluated postoperative CTC status and outcomes in cases where no CTCs were detected immediately before surgery. Therefore, the present study evaluated the clinical relevance of CTC detection immediately after lung cancer resection in cases without preoperatively detected CTCs. We present the following article in accordance with the STROBE reporting checklist (available at http://dx.doi.org/10.21037/jtd-20-1636).

This retrospective study complied with the STROBE guidelines (8). The study included 81 lung cancer patients with negative preoperative results for CTCs and who completed postoperative testing for CTCs, as shown in Figure 1. The clinical relevance of postoperative CTC detection was evaluated based on the clinicopathological characteristics and recurrence patterns. 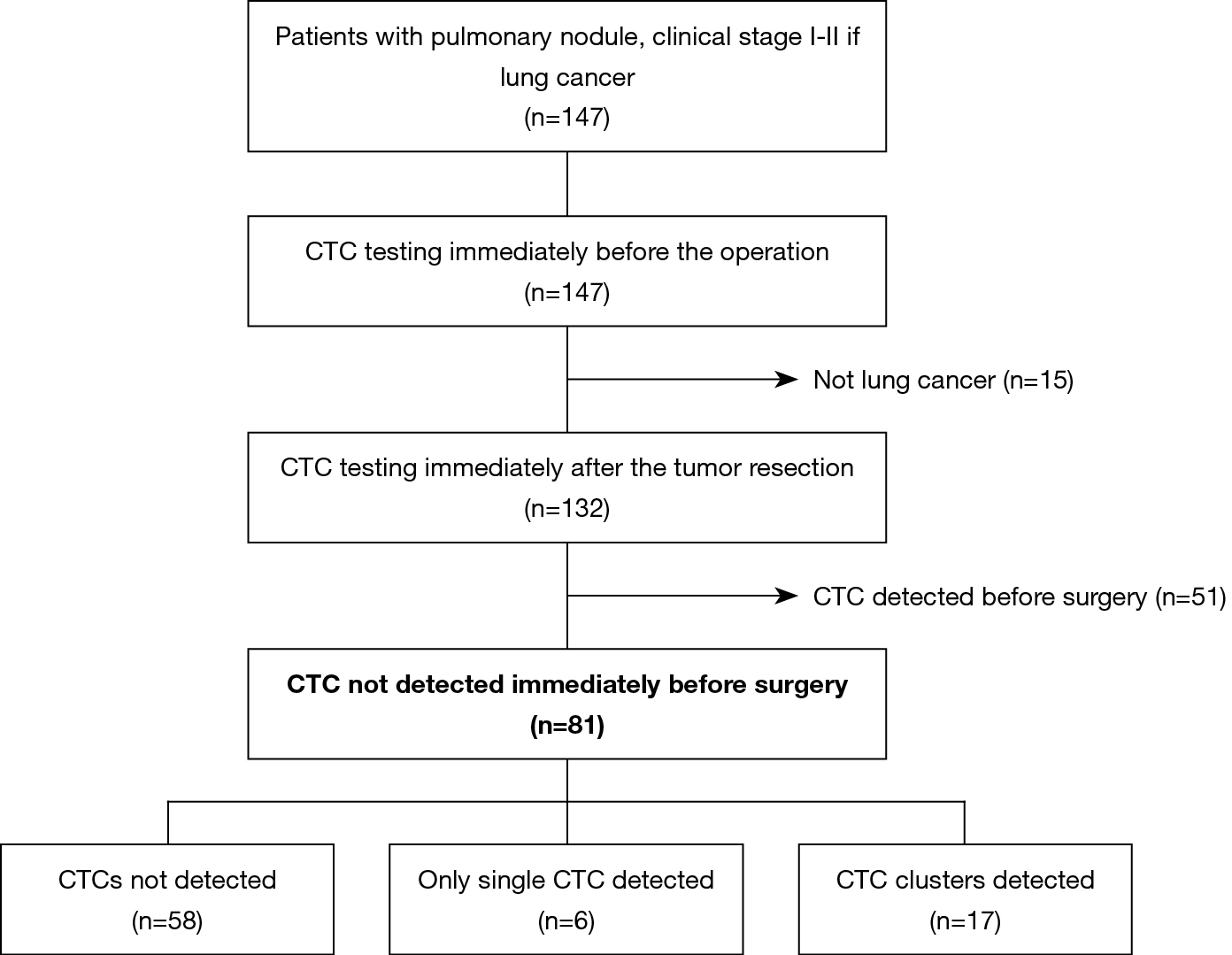 Between April 2014 and August 2018, 147 patients with pulmonary nodules (clinical stage I–II if lung cancer) that were detected using computed tomography (CT) underwent preoperative testing to detect CTCs at Hoshigaoka Medical Center or Nara Medical University Hospital. Among these cases, 132 cases were pathologically diagnosed as non-small cell lung cancer. However, the preoperative testing revealed CTCs in 51 cases, which were excluded. Thus, the present study included 81 cases without preoperative evidence of CTCs (Figure 1). The patients’ characteristics are shown in Table 1. 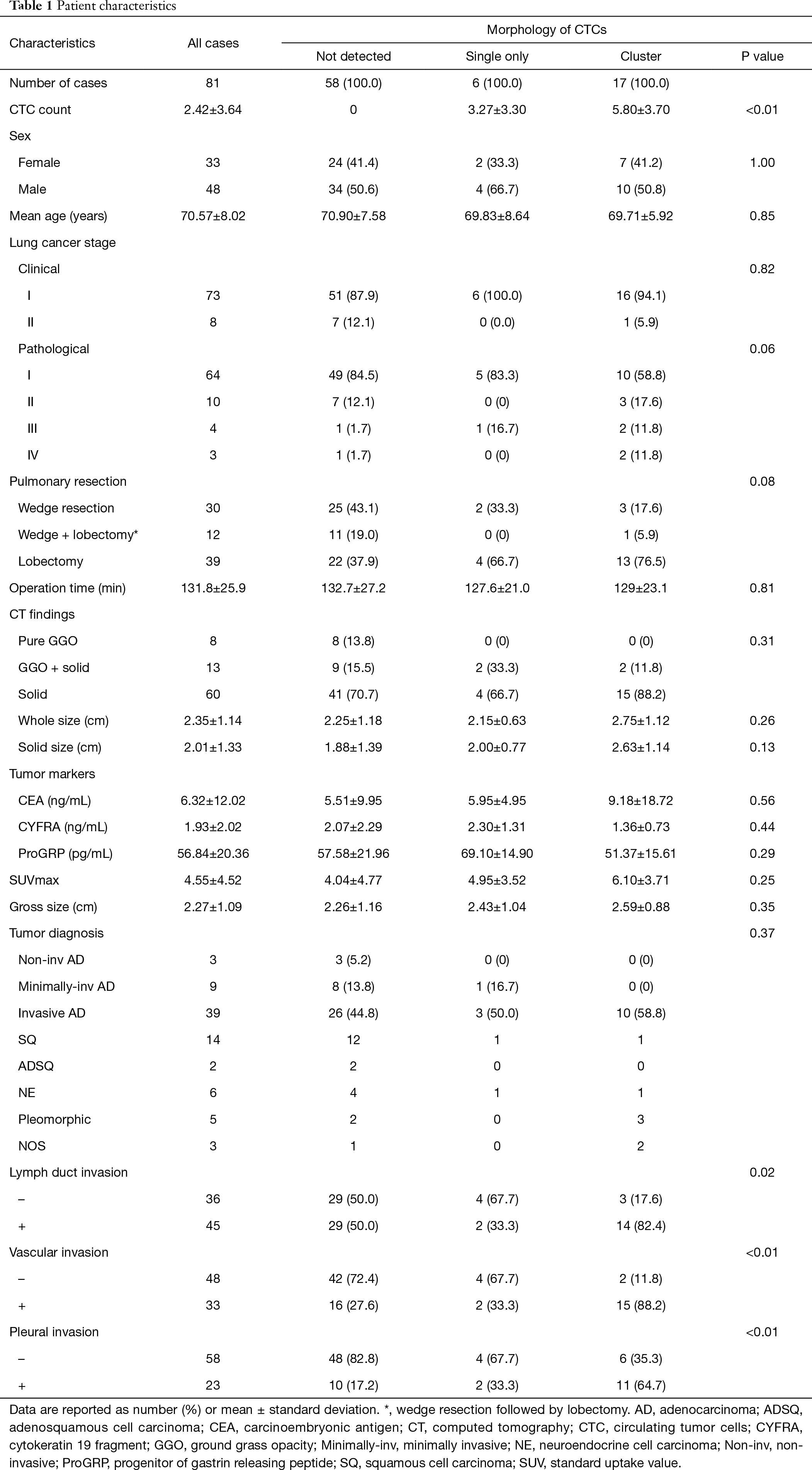 Peripheral arterial blood (3 mL) was collected in the operating room immediately before surgery and placed in a tube with ethylenediaminetetraacetic acid. When the pathological examination confirmed the presence of lung cancer, we also obtained a postoperative blood sample for testing in the operating room at the completion of pulmonary resection. All samples were processed within 1 h from the end of the operation. The presence of CTCs in the blood samples was evaluated using the ScreenCell® CTC selection kit, which uses a size-based selection method (10). To lyse the red blood cells before filtration, the blood samples were diluted in 4 mL of a buffer for fixing cells. After filtration of the fixed cells, the filter was washed with 1 mL of phosphate-buffered saline to remove the cellular debris. The extracted cells were then stained using hematoxylin and eosin and observed under a light microscope.

The presence of CTCs was determined based on a cytology atlas for CTCs from solid cancers (11). Suspicious cells were not considered CTCs for the present study. The CTC detection results were divided into three types based on the morphology findings: no CTCs were detected (Group N), only single CTCs were detected (Group S), and CTC clusters were detected (Group C). A “cluster” was defined as ≥4 cells to minimize the contribution of collection- or preparation-related artifacts. All CTC evaluations were performed by a surgeon (N Sawabata) and the diagnoses were confirmed by a pathologist (T Ito).

All patients were followed at 1- to 3-month intervals, which included physical and chest radiography examinations, as well as blood testing for tumor markers. The patients also underwent thoraco-abdominal CT scans that were generally performed at 6-month intervals. Mortality and recurrence data were collected by the primary physician (N Sawabata). The median follow-up period was 44 months (range, 18–68 months) and the last follow-up examination was during July 2019. Recurrence was classified as none, resection margin recurrence (local), ipsilateral intrathoracic recurrence (regional), or metastasis outside the ipsilateral intrathoracic cavity (distant).

The primary outcome was defined as the 2-year recurrence-free survival rate, which was evaluated based on Kaplan-Meier curves and the log-rank test. Cox proportional hazard models were used for the univariate and multivariate analyses. In addition, we investigated the associations between tumor-related factors and the morphological CTC classifications. Inter-group comparisons were performed using the t-test and Fisher’s exact test, as appropriate, and differences were considered statistically significant at P values of <0.05. All analyses were performed using freely available “EZR” software, which is based on R and R commander (12).

The study was conducted in accordance with the Declaration of Helsinki (as revised in 2013). This study’s protocol was approved by the institutional review board of the Hoshigaoka Medical Center and the Nara Medical University Hospital. Informed consent was obtained from all individual participants who were included in the study. 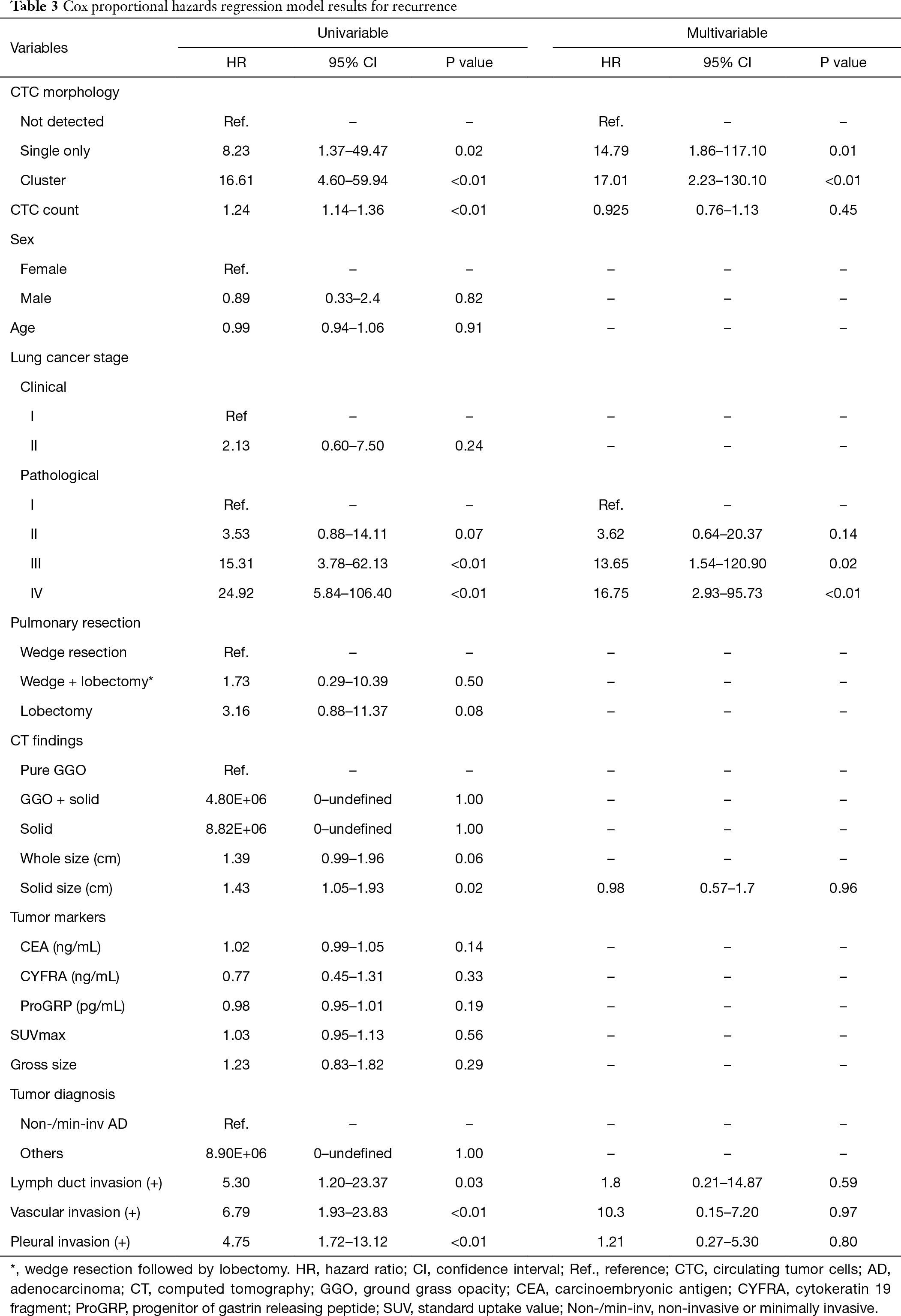 Some reports regarding lung cancer cases have described CTC detection after surgical manipulation, although the clinical relevance of these postoperatively detected CTCs remains controversial. Before the current morphological detection method became ubiquitously available, CTC shedding after surgical manipulation was identified using a real-time polymerase chain reaction method (13-15). Yamashita et al. also described the detection of CTCs in peripheral blood by targeting the mRNA for carcinoembryonic antigen (CEA), which revealed that, among patients without preoperative evidence of CTCs, approximately 30% of patients had postoperatively detected CTCs (14). Yao et al. also reported that CTCs were surgically shed in the pulmonary vein using fluorescence-activated cell sorting that targeted the epithelial cell adhesion molecule (EpCAM) (15). In 2007, Sawabata et al. reported the morphological evaluation of CTCs using the CellSearch® system after surgery for lung cancer (16). That system can visualize a single CTC and their findings revealed postoperative CTCs in approximately 25% of patients who did not exhibit preoperative CTCs. Furthermore, Matsutani et al. evaluated CTC shedding after pulmonary resection in a multi-center prospective study using a micropore film size-based selection method (ScreenCell®) (17). Hashimoto et al. also used the CellSearch® method to determine that a postoperatively increased CTC count was a significant predictor of distant metastasis (18). Moreover, despite a small sample size, Sawabata et al. used the ScreenCell® method to determine that both preoperative and postoperative detection of CTC clusters were significant predictors of early recurrence (19). A novel finding from the present study is that distant metastasis was very common in cases with CTC clusters that were detected immediately after the resection, which suggests that CTC clusters in this setting may predict the development of distant metastasis. However, an issue with immunostaining-based CTC detection is the fact that epithelial markers may not be detectable on CTC clusters, which suggests that it is still important to perform morphological CTC detection.

Management of the pulmonary vasculature before resection of lung cancer can be considered a type of NTIT, which we routinely use in cases involving lobectomy. Song et al. used real-time PCR to determine that a lower CTC count was observed for patients who underwent a vein-first ligation technique, relative to patients who underwent an artery-first ligation technique (20). Wei et al. also recently reported that the postoperative CTC count was lower for the vein-first technique, based on an antigen-positive selection method (21), and that the vein-first technique was associated with better survival outcomes. There are additional reports that vein-first lobectomy is associated with significantly better survival outcomes (21-23), although other studies have failed to detect a significant difference in survival between the vein-first and artery-first techniques (24-26). The presence of postoperative CTCs appears to be a more sensitive predictor of recurrence (27), and the present study’s findings suggest that surgical manipulation can lead to seeding of CTCs, which become detectable after surgery and presumably contribute to recurrence and distant metastasis. It seems logical that postoperative single CTC detection would predict recurrence, although preoperative single CTC detection does not seem to be related to postoperative recurrence (28).

The present study has several limitations. First, the small sample size from only two centers and the retrospective design highlight the potential risks of bias. Second, the patients underwent various forms of surgery, including wedge resection, wedge resection followed by lobectomy, and lobectomy alone, although the surgical technique was not a significant factor in the regression analysis. Nevertheless, our wedge resection technique without tumor release using ring-shaped forceps has a low potential for releasing CTCs (9). We also only considered cases without preoperative evidence of CTCs, which is an ideal group to investigate the relevance of CTC detection after surgical manipulation. However, we performed the CTC detection using 3-mL blood samples, which are relatively small, and the results might be more accurate if larger blood samples were used. In addition, the generalizability of our findings needs be established via other studies in the same setting.

The present study revealed that, among patients treated for non-small cell lung cancer at our center, CTCs could be detected immediately after surgery, and that these postoperatively detected CTCs were an independent predictor of recurrence.

The authors thank Dr. Ikuko Torii (Department of Pathology, Hoshigaoka Medical Center) for her contributions to the cytological-pathological diagnoses. The authors also thank Editage for English language editing. These findings were presented at the 56th annual meeting of the Society of Thoracic Surgeons (January 26th, 2020, New Orleans, USA).

Funding: This study was funded by a Grant-in-Aid for Scientific Research (B) from the Japan Ministry of Education, Science, Sports and Culture (25293301) and by the Japanese Respiratory Foundation (2019).

Reporting Checklist: The authors have completed the STROBE reporting checklist. Available at http://dx.doi.org/10.21037/jtd-20-1636

Conflicts of Interest: All authors have completed the ICMJE uniform disclosure form (available at http://dx.doi.org/10.21037/jtd-20-1636). The authors have no conflicts of interest to declare.

Ethical Statement: The authors are accountable for all aspects of the work in ensuring that questions related to the accuracy or integrity of any part of the work are appropriately investigated and resolved. The study was conducted in accordance with the Declaration of Helsinki (as revised in 2013). This study’s protocol was approved by the institutional review board of the Hoshigaoka Medical Center (No. 1412) and the Nara Medical University Hospital (No. 1718). Informed consent was obtained from all individual participants who were included in the study.