Thoracic tumors, especially lung cancers, are among the most prominent malignancies endangering human health and life, with rapidly increasing morbidity and mortality (1). Video-assisted thoracic surgery (VATS) is a required surgical method to treat lung cancer and other thoracic diseases and offers several potential advantages compared to traditional thoracotomy. VATS can reduce surgical trauma, shorten surgery, and anesthesia time, and decrease the incidence rate of cardiopulmonary complications (2,3). With the progress of VATS technology and the improvement of VATS instruments, VATS is increasingly widely used. However, patients still require analgesia after VATS (4,5). Postoperative pain is still one of the most common clinical problems following VATS and is a key factor hindering the rapid recovery of patients (6,7).

The clinical significance of improving postoperative analgesia is self-evident. However, the multi-source mechanism of postoperative pain following VATS presents a persistent challenge for clinicians. This phenomenon is because the single analgesic method or the calibration of analgesic drugs cannot achieve an ideal clinical result, with postoperative pain (and especially motion pain) being problematic. According to the statistics of the pain management team in our center, 80% of the 375 patients who underwent VATS from January 2016 to June 2016 had a numeric rating scale (NRS) ≥3 within 3 days after surgery using the current routine postoperative analgesia program.

Preemptive analgesia (PA) refers to using analgesic methods before surgical incision or stimulation to change the perception of harmful stimulation by peripheral and central nervous systems; to reduce central sensitization, hyperalgesia, and touch-induced pain. However, this concept is still controversial (8-11). Some studies suggest using analgesia before surgery to reduce postoperative pain, and opioid use is unnecessary (8). Some studies have also confirmed the effectiveness of preemptive analgesia in VATS, but the numbers of cases and diseases involved are relatively small (12). The effectiveness of PA in relieving postoperative pain following VATS and reducing the side effects of analgesics (especially opioid-related side effects) has not yet been determined. Therefore, this study aims to test the clinical application value of PA in relieving postoperative pain following VATS through a prospective, non-randomized controlled clinical study.

We present the following article following the TREND reporting checklist (available at http://dx.doi.org/10.21037/jtd-20-2500).

From January 1, 2018, to August 31, 2018, patients who underwent VATS at Enze Hospital of Taizhou Enze Medical Center (Group) were included in our study. Screening criteria included: (I) American Society of Anesthesiologists (ASA) grade I–III; (II) age between 18–80 years; (III) patients with lung or mediastinal disease undergoing VATS; (IV) an expected surgery time of between 1–6 hours; (V) numbers of holes in thoracoscopy is 1–3.

This study is a single-center, prospective, open, non-randomized controlled clinical trial. The medical ethics committee of Enze Hospital of Taizhou Enze Medical Center (Group) reviewed and approved the study and registered in the ClinicalTrials.gov Registration (Registration No. chictr2000030144), with the informed consent of all participants.

All procedures performed in this study involving human participants were in accordance with the Declaration of Helsinki (as revised in 2013).

The following analgesic treatments were administered either individually or in combination:

See appendix (Supplementary file) for details regarding the observation and evaluation of the preventive antiemetic and the treatment plan for adverse effects of analgesia (including the treatment of circulatory inhibition, respiratory inhibition, excessive sedation, and nausea and vomiting). Pain score, sedation score, and adverse drug reactions were tested every 4 hours.

By using the optimal test, we determined the test level is bilateral α=0.05, β=0.20, and the sample ratio of the PA group and the TA group is 1:1. According to the data obtained from the pain management group in our center, assuming that NRS ≥3 within 3 days after VATS is the standard, the current ratio is 80%. We assumed that a 20% reduction in the proportion of the PA group is clinically significant. The Power and Sample Size Program 3.0 statistical software were used for calculation. A sample size of 79 cases was needed for each group, and 10% of the dropout rate was added gradually. There were 87 cases in each group, and 174 patients were needed in the two groups in total. In the mid-term analysis, considering the increase of the shedding rate, we continued to expand the sample size. So, 23 cases were added into each group, with 46 cases across both groups. Finally, 220 cases were included in the study, with 110 cases in each group.

Two hundred twenty patients took part in the trial, with 110 in each group. After exclusion and elimination, 105 cases from the PA group and 80 cases from the TA group were included in the analysis. The TA group had a smaller cohort because blood samples from some patients were not collected, or their clinical information was not gathered completely (Figure 1). 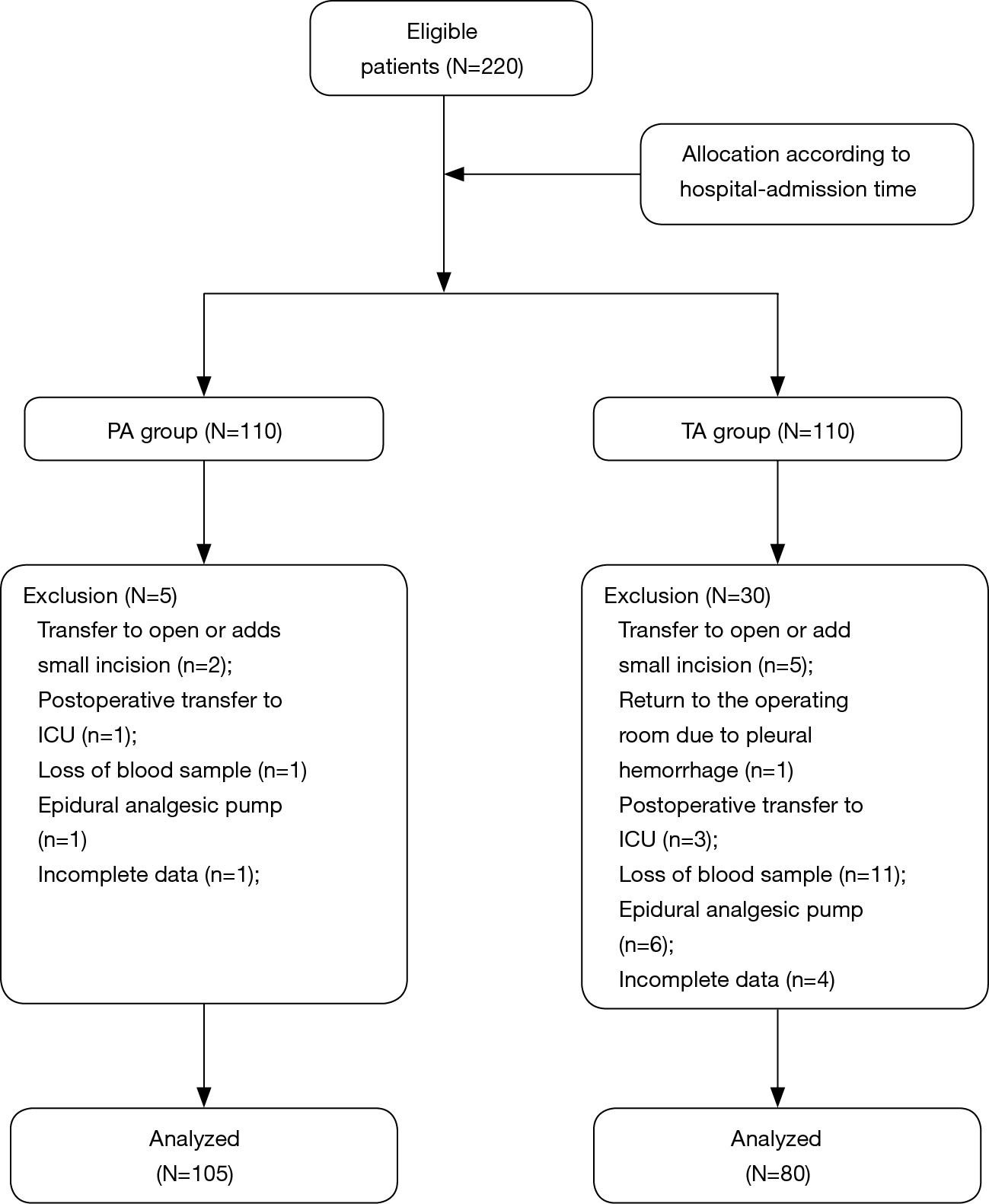 Comparison of baseline characteristics between the two groups 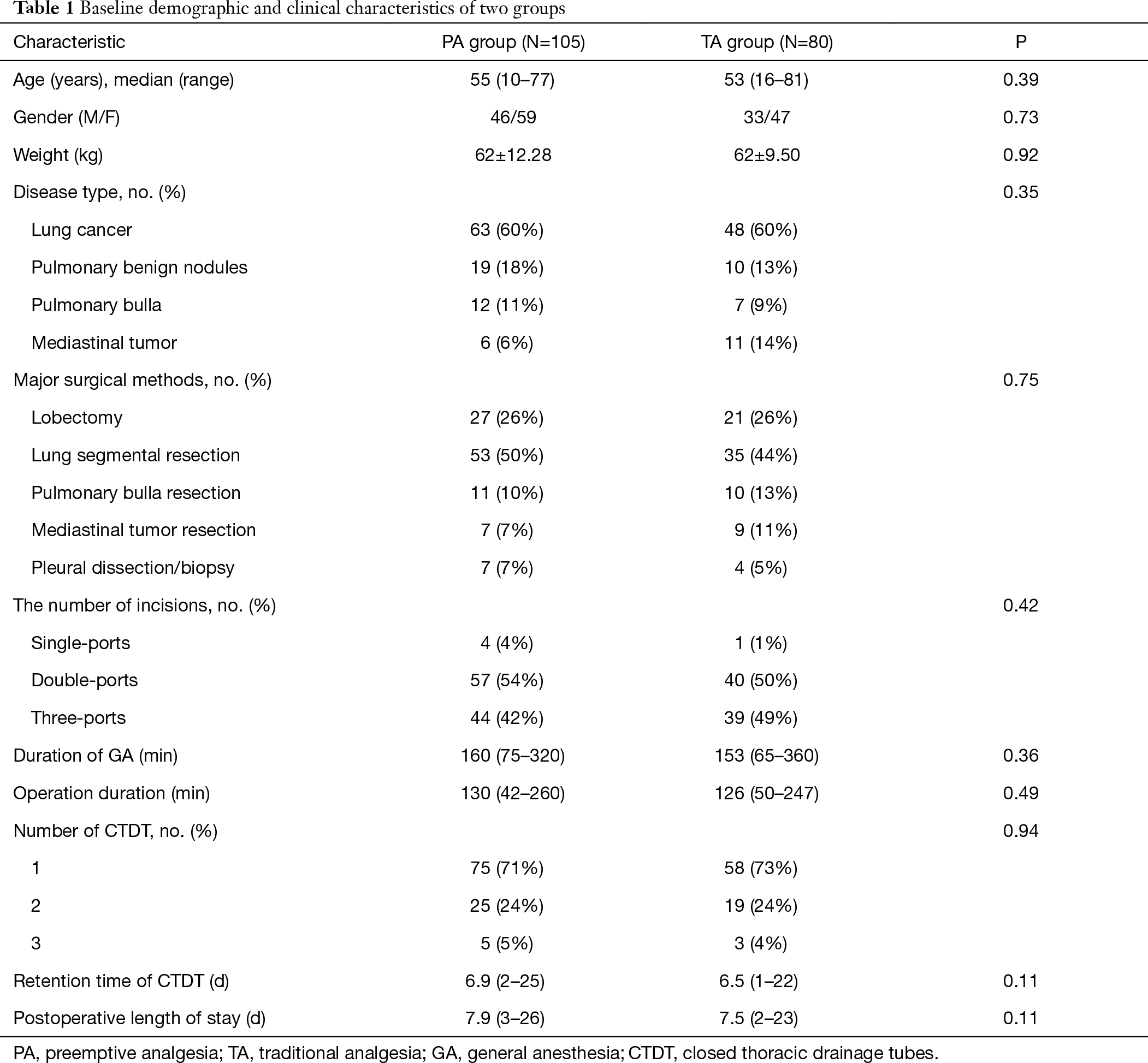 Comparison of pain NRS between the two groups 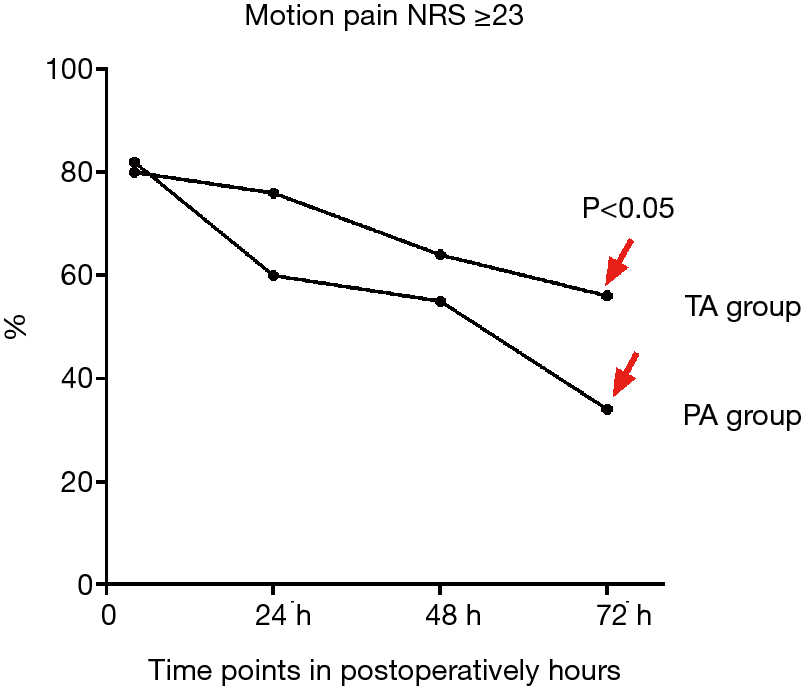 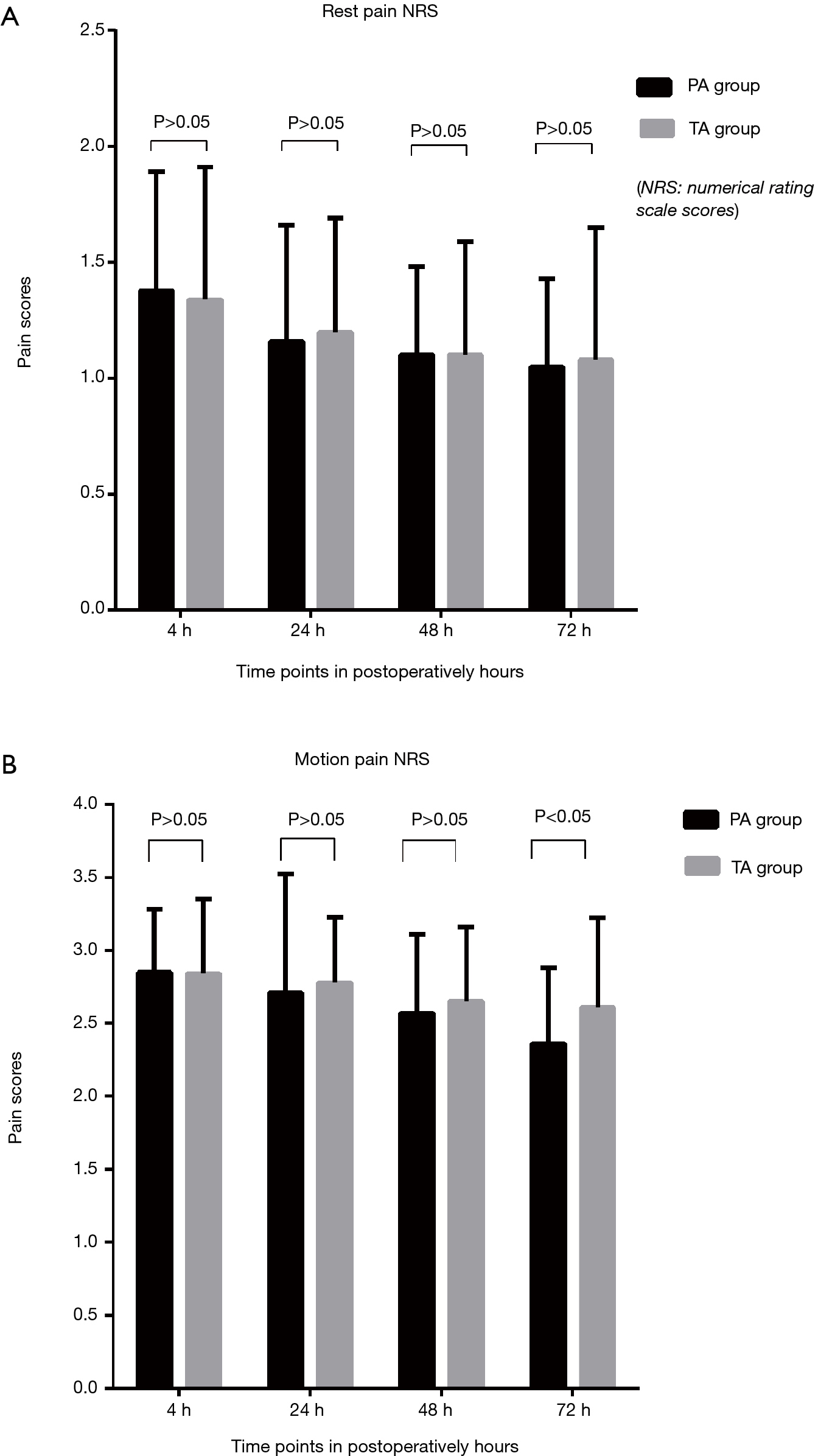 For both groups, the most common site of postoperative pain was at the incision site. There were no statistically significant differences between the groups at 4, 24, 48, and 72 hours following surgery (P>0.05).

Nausea, vomiting, and dizziness were the common side effects of analgesics in both groups. The incidence rate of analgesic-related side effects in the PA group was lower than the TA group, and there was a statistically significant difference at 48 and 72 hours post-surgery (P<0.05) (Table 2). 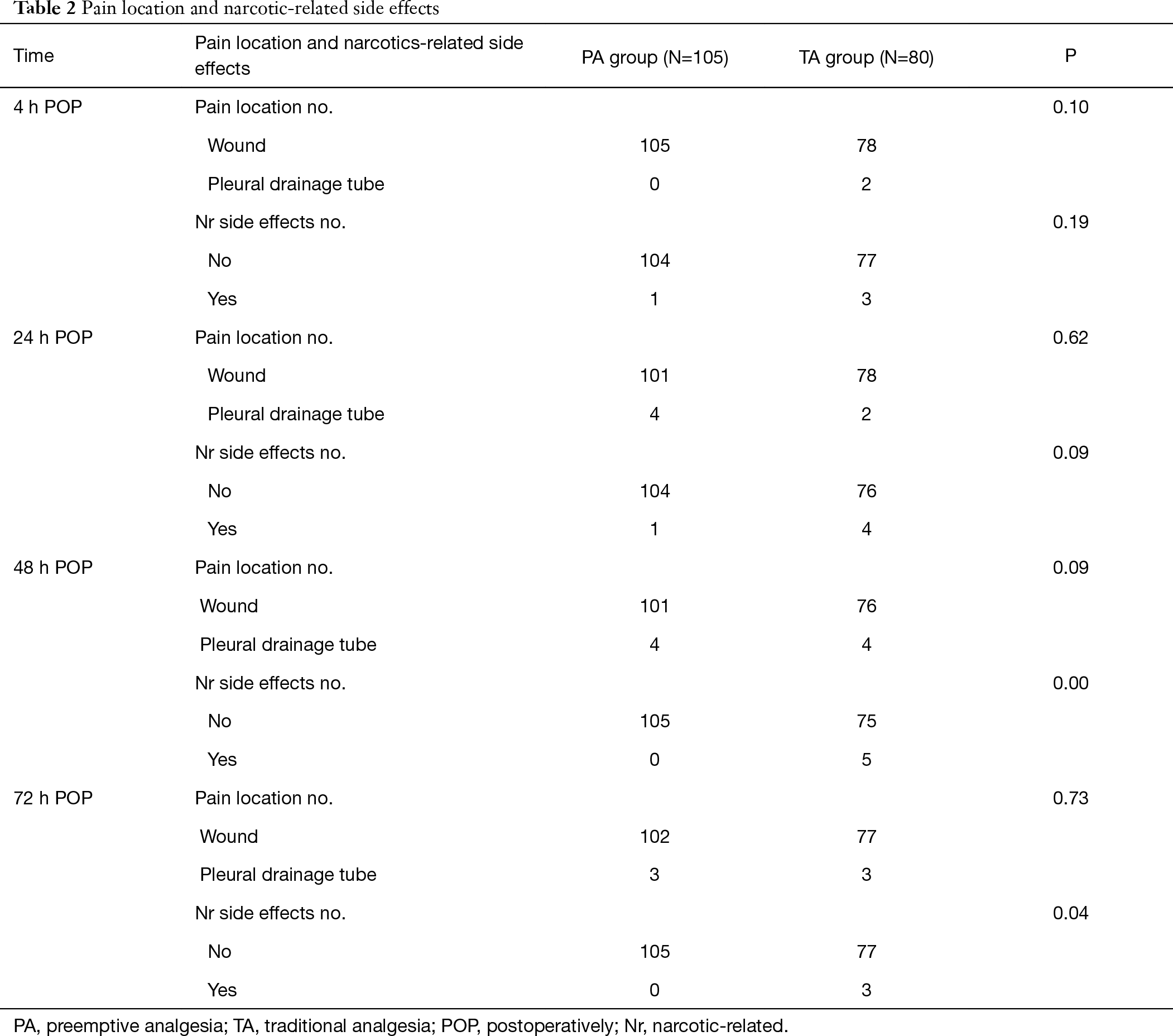 Comparison of stress indicators between the two groups

There were no statistically significant differences in the perioperative stress indexes, including blood glucose, plasma cortisol, CRP, and IL-6 between the two groups (P>0.05) (Table 3). 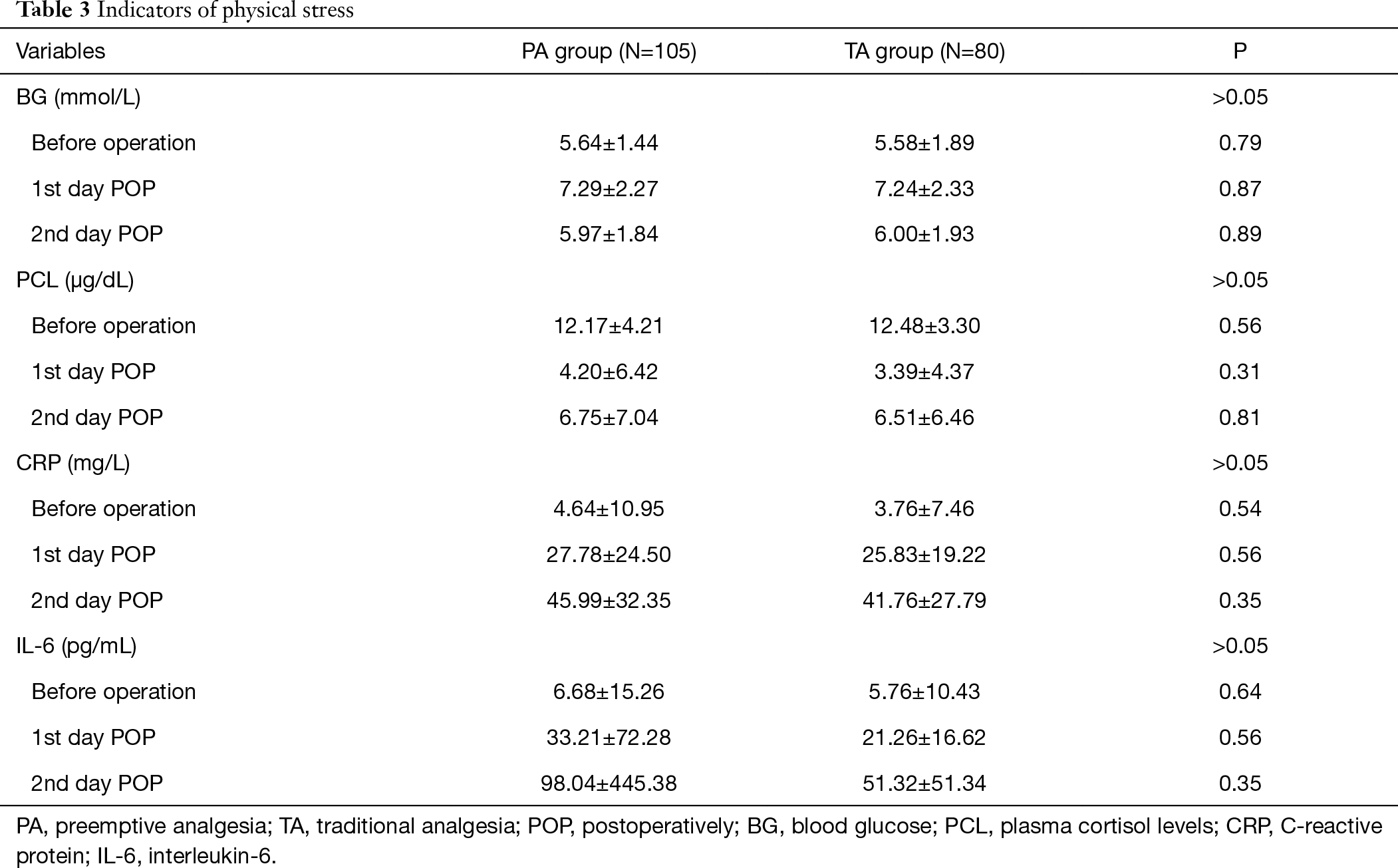 In this study, we found that PA can relieve the postoperative pain of VATS and reduce the incidence rate of analgesic-related adverse reactions compared with the traditional analgesia program. However, it has no significant effect on the postoperative stress response.

The goal of perioperative pain management in clinical practice is to relieve the pain experienced by patients and reduce the length of hospitalization to enable rapid recovery following surgery. Severe pain after VATS has a considerable impact on the body and patient habits, including limitation of thoracic activity, shallow breathing, fear of coughing and expectoration, deep breathing, and turning over. It will also be likely to lead to pulmonary complications, including atelectasis and pulmonary infection. Simultaneously, severe pain can also lead to a stress reaction and an increased secretion of catecholamine and other substances, inducing an increase in pulse, respiration, blood pressure, blood sugar, and oxygen consumption. These circumstances will disturb the body’s internal stability and weaken immunity, thus delaying recovery. Therefore, effective perioperative pain management is critical for patients following VATS.

Like other surgeries, thoracoscopic surgery involves many receptors, including skin, muscle, intercostal nerve, rib, and pleura. Because of the direct tissue trauma (i.e., incision, separation, burning, etc.), pain can result from inflammation or direct nerve injury (10). Also, tissue trauma will induce local inflammatory mediators, which will increase the sensitivity of the surrounding area to stimulation (hyperalgesia), or erroneously produce pain to non-noxious stimulation (touch-induced pain). Some inflammatory mediators will also cross the blood-brain barrier, resulting in the up-regulation of COX-2 expression in the spinal cord and cerebral cortex, inducing inflammatory pain (10,11). Specifically, for VATS, the placing of thick and hard materials for thoracic drainage can easily result in stimulation of the pleura and compression of the intercostal nerve, resulting in additional postoperative pain (13,14). Patients need to cough and expectorate actively to prevent atelectasis post-surgery, and so they cannot guarantee protective posture and many other factors, which will also inevitably lead to pain after VATS.

PA aims to reduce the pain sensitization caused by the stimulation of surgery. The effectiveness of PA is measured by its ability to ease postoperative pain or reduce using analgesics (15). At present, several effective preventive analgesic techniques use various drugs and interventions. These techniques reduce nociceptor activation and inhibit the production and activity of pain neurotransmitters. The result is a reduction in opioid use and opioid-related side effects after surgery (16).

For example, physicians can inject local anesthetics around the surgical incision to offer a preventive analgesic effect. According to a 2005 meta-analysis, patients who received local infiltration anesthesia before incision had a statistically significant decrease in using analgesics and a longer time interval to the first need for remedial analgesia. However, there was no difference in the postoperative pain score (17). Some randomized controlled clinical trials showed that local anesthetics injected around small incisions could reduce postoperative body pain. However, they do not appear to relieve visceral pain (18-21). Preoperative prophylactic administration of anti-inflammatory drugs or analgesics, including non-steroidal anti-inflammatory drugs (NSAIDs)—either selective COX-2 inhibitors or non-selective COX inhibitors—will help reduce the incidence rate of postoperative inflammatory pain. It may also reduce the incidence rate of long-term chronic pain, which might explain the effectiveness of PA in relieving pain following VATS.

As mentioned above, taking celecoxib orally before surgery and using local infiltration anesthesia before incision may reduce pain after VATS (especially motion pain), with benefits being most apparent 72 hours after surgery. The mechanism of preemptive analgesic techniques may be through preventing the transmission of peripheral injury impulses to the central nervous system and inhibiting the establishment of conduction and reducing the peripheral and central sensitization caused by harmful stimulation afferent. Also, PA can reduce the amounts of anesthetics used during surgery. It can also help minimize incrementally increasing doses of the single analgesic method, reducing the incidence rate of analgesic-related side effects after VATS, especially in patients 48 and 72 hours after surgery.

However, compared with TA, PA does not notably affect the body’s stress response following thoracoscopic surgery. These findings show that surgical trauma is still the principal factor causing postoperative stress. It also suggests researchers should explore further measures so that the specifics of PA are perfected to minimize body stress after VATS.

Some limitations of this study should be noted. Because perioperative pain is rooted in patients’ subjective feelings, surgical trauma thus not triggers it but is also directly affected by several other factors (including patients’ physical conditions and psychological problems). Since this study is not a randomized controlled trial and is limited by sample size, the bias above cannot be excluded entirely.

In conclusion, PA can relieve postoperative pain following VATS, reduce analgesic drug-related side effects, and increase the comfort of patients, promoting rapid postoperative recovery. PA presents a promising treatment mode from now on. The specifics of PA need to be perfected and improved, so it is more conducive to the perioperative pain management of VATS.

The treatment plan for adverse effects of analgesia

Funding: This work was supported by the Taizhou Science and Technology Agency, Zhejiang Province, China (1701KY25).

Reporting Checklist: The authors have completed the TREND reporting checklist. Available at http://dx.doi.org/10.21037/jtd-20-2500

Conflicts of Interest: All authors have completed the ICMJE uniform disclosure form (available at http://dx.doi.org/10.21037/jtd-20-2500). The authors have no conflicts of interest to declare.

Ethical Statement: The authors are accountable for all aspects of the work in ensuring that questions related to the accuracy or integrity of any part of the work are appropriately investigated and resolved. All procedures performed in this study involving human participants were following the Declaration of Helsinki (as revised in 2013). The medical ethics committee approved this study of Enze Hospital of Taizhou Enze Medical Center (Group) (No. 20170822), with the informed consent of all participants.