Pulmonary emphysema is associated with fungal sensitization in asthma

There are several diseases other than bronchiectasis that can make it easy for fungi to colonize the lower respiratory tract. In an investigation of underlying diseases of chronic pulmonary aspergillosis (including pulmonary aspergilloma which usually results from an ingrowth of colonized Aspergillus) (8), chronic obstructive pulmonary disease (COPD) and/or emphysema was shown to be a common pulmonary disease (9). Indeed, it is not rare to see patients who develop aspergilloma located in emphysematous bulla complicated with pulmonary emphysema. Moreover, in a study of the airway colonization of severe pulmonary emphysema in patients undergoing endoscopic lung volume reduction, colonizations of Candida, Aspergillus, and Penicillium were observed in the lower respiratory tract (10).

Patients with allergic asthma whose sensitization to Aspergillus and/or Candida were evaluated from April 2016 to July 2018 in The Fraternity Memorial Hospital were enrolled in this study. The inclusion criteria were as follows: (I) patients who were diagnosed with asthma based on the Global Initiative for Asthma (GINA) guidelines; (II) patients who showed positive radioallergosorbent test (RAST) results to environmental allergens related to asthmatic symptoms; (III) patients who underwent chest CT within 1 year before and after their sensitization to Aspergillus and/or Candida was evaluated; (IV) patients in whom we could determine whether or not there was a complicating asthma-COPD overlap (ACO). The sensitizations were evaluated by RAST. A positive RAST is defined as class 1 or greater. ACO was defined as patients who were ≥40 years old and had a smoking history of ≥10 pack-years and an FEV1/FVC of <70%. This study was conducted under the approval of the Ethics Committee of The Fraternity Memorial Hospital and in accordance with the Declaration of Helsinki (as revised in 2013). Individual consent for this retrospective analysis was waived.

The presence of pulmonary emphysema was determined based on the presence of focal areas of low attenuation without visible walls. We also categorized emphysema into three types: centrilobular, panlobular, and paraseptal emphysema. A typical image of each type of emphysema is shown in Figure 1. The presence of bronchiectasis was determined based on the presence of one or more following features: (I) an internal diameter of the bronchus greater than that of the adjacent pulmonary artery, (II) a lack of tapering of the bronchial lumen toward the periphery, or (III) visualization of the bronchus within 10 mm of the pleura. The images were analyzed in consensus by two experienced pulmonologists (Y Kono, R Tsuzuki) blinded to clinical data including fungal sensitization.

P values <0.05 were considered significant. Categorical variables were compared by Fisher’s exact test. The Mann-Whitney U-test was performed to analyze the differences between the groups. A multivariate logistic regression analysis was performed using EZR (Saitama Medical Center, Jichi Medical University, Saitama, Japan). Sensitization to Aspergillus and/or Candida was used as a dependent variable, whereas age, gender, pack-years, and ACO were used as independent variables. All other statistical analyses were performed using the GraphPad Prism software program (GraphPad, San Diego, CA). 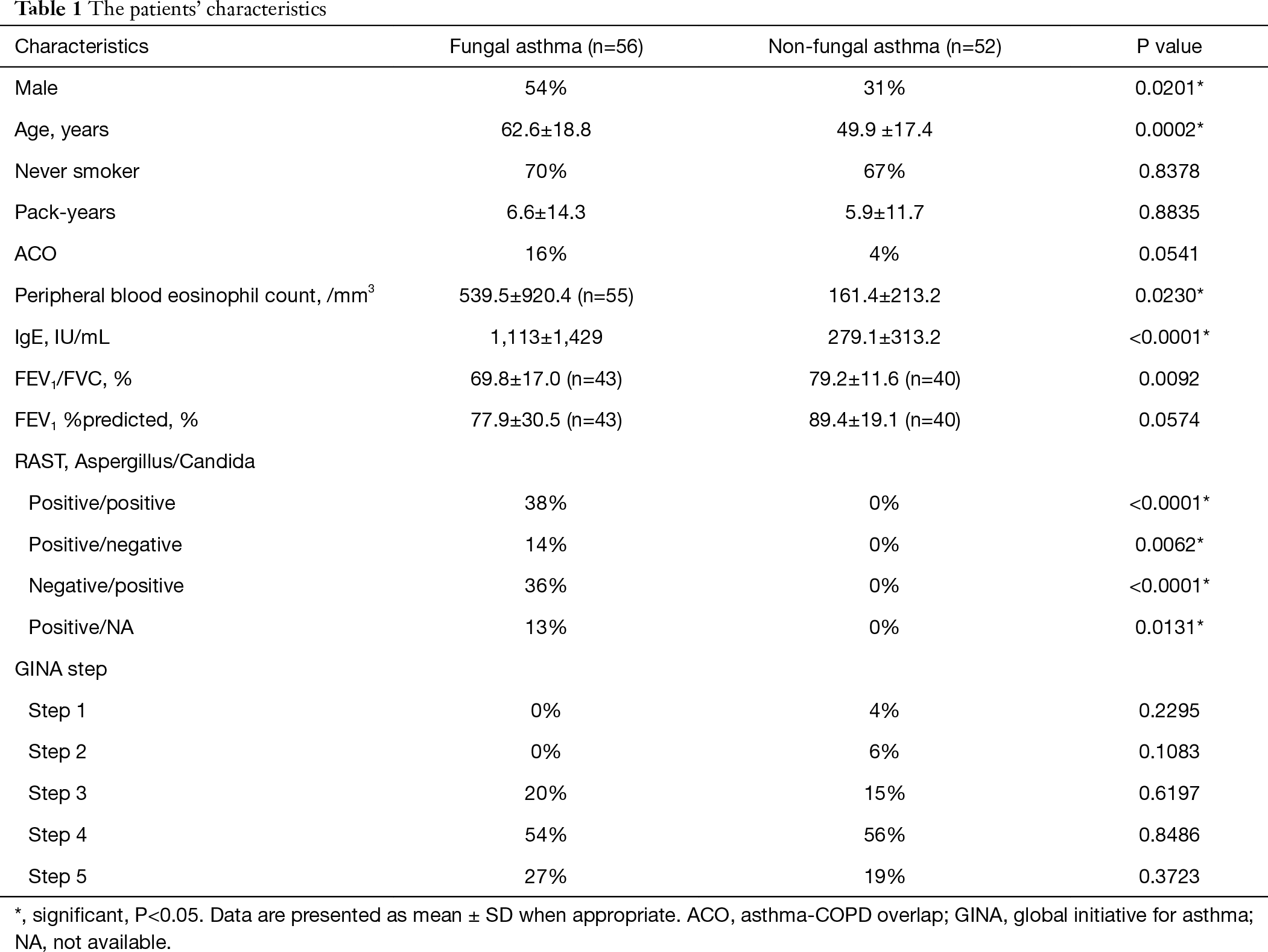 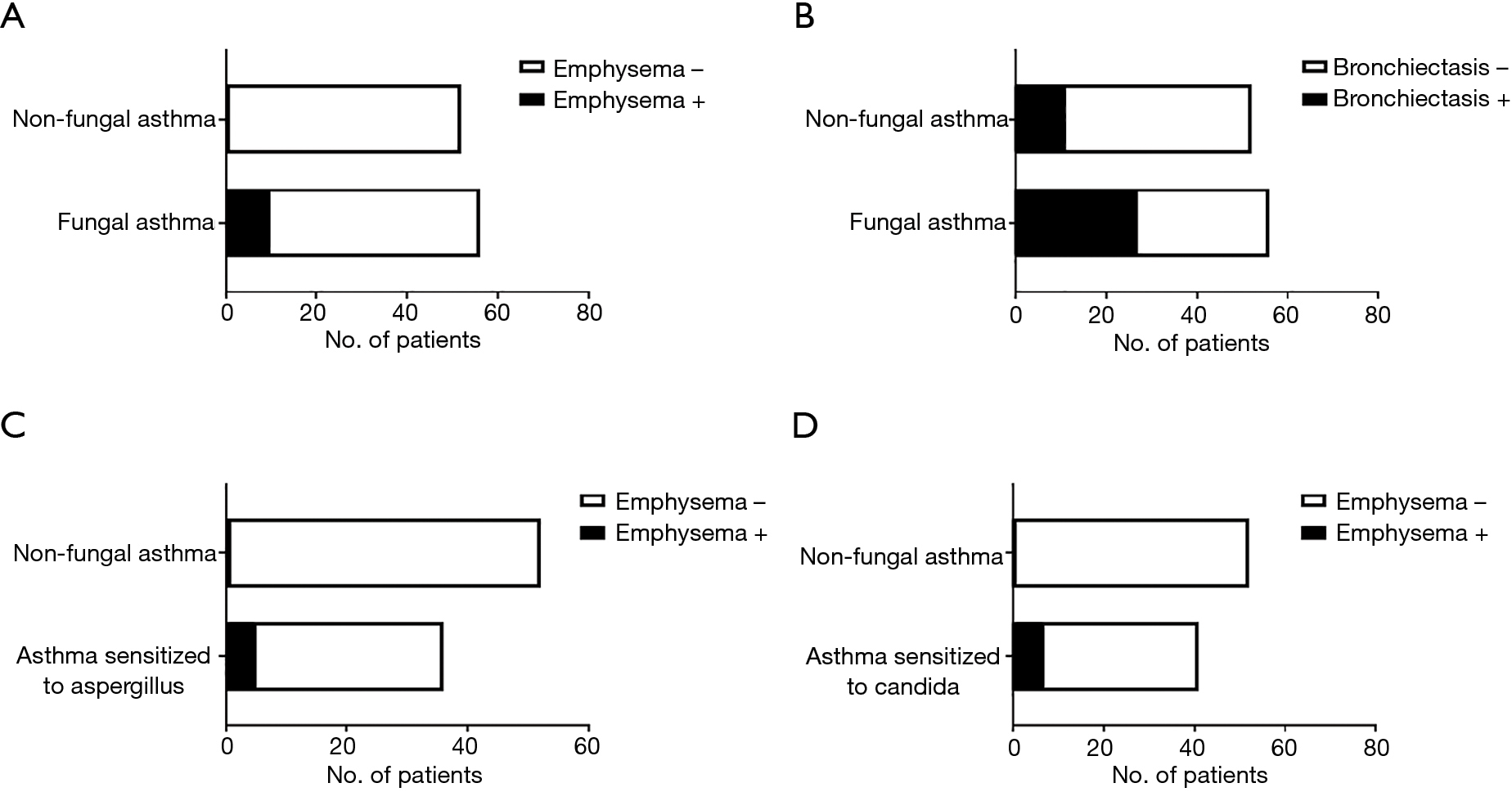 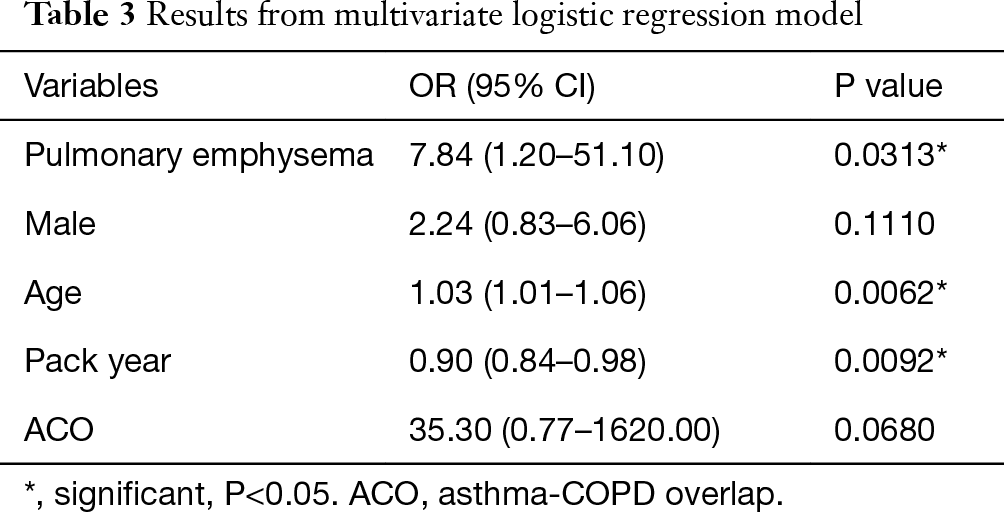 Several research groups have suggested that fungal colonization is associated with sensitization to Aspergillus. It was reported that in patients with asthma who were sensitized to Aspergillus, Aspergillus was frequently isolated from their sputa by culture and polymerase chain reaction (PCR) (11,12). Moreover, the basic etiology of allergic bronchopulmonary aspergillosis (ABPA) is thought to be allergic reaction to colonized Aspergillus (13). It is thus important for the diagnosis to check for Aspergillus in the patient's sputum. Antifungal therapy has been reported to be an effective treatment for ABPA (14,15), suggesting a close relationship between the colonization and allergic reaction in Aspergillus.

The precise mechanisms underlying an impaired local defense system in pulmonary emphysema are unknown. However, in COPD, the degree of emphysema was reported to be higher in patients who exhibited chronic colonization with Haemophilus influenzae compared to patients with no chronic colonization of H. influenza (20). In a study of hamsters with emphysema induced by porcine pancreatic elastase, chronic bacterial infection and colonization were reported to be highly correlated with lung emphysematous lesions (21). These reports suggest that pulmonary emphysema contributes to the disruption of the local defense system, leading to the colonization of microorganisms.

There are some study limitations to address. The first is that this study was a retrospective, single-center study with a small number of patients. A second limitation is that we did not evaluate fungal colonization, and thus the relationship between colonization and sensitization in our patient series is unknown. A third limitation is that our study population was not a general asthmatic population, because we enrolled only patients who had undergone chest CT. In general, chest CT is not performed in mild asthma. The ratio of severe asthma in this study is thus likely to be higher than that in the general asthmatic population. A fourth limitation is that there is a possibility that underdiagnosed patients with ABPA were included in this study.

Ethical Statement: The authors are accountable for all aspects of the work in ensuring that questions related to the accuracy or integrity of any part of the work are appropriately investigated and resolved. This study was conducted under the approval of the Ethics Committee of The Fraternity Memorial Hospital and in accordance with the Declaration of Helsinki (as revised in 2013). Individual consent for this retrospective analysis was waived.