Lung cancer is the first cause of cancer-related death, and it is of note that the majority of patients are diagnosed with metastatic disease (1). Non-small-cell lung cancer (NSCLC), and, more specifically adenocarcinoma, represents the most frequent histological type. Epidermal growth factor receptor (EGFR) mutation is found in approximately 11% of Caucasian patients with advanced metastatic lung adenocarcinoma (2), and such mutations predict the efficacy of EGFR tyrosine kinase inhibitors (TKIs) that are the standard-of-care first-line treatment in such patients (3-5). EGFR mutations are, however, heterogeneous; the most common are exon 19 deletions and p.Leu858Arg point mutation are each observed in 40–45% of cases (6), but several other mutations, so-called uncommon EGFR mutations, are spread within exons 18-21 (6).

Whether available EGFR TKIs are effective in patients with uncommon EGFR mutations is currently unclear as response to treatment is variable (7). For instance, while p.Glu719X and p.Ser768Gln have been reported to be associated with response to second generation TKIs such as afatinib in the landmark trials of this inhibitor (6), other mutations may predict primary resistance or lower sensitivity to first- and second-generation EGFR-TKIs, such as the p.Thr790Met mutation in exon 20 and p.Leu861Gln mutation in exon 21, respectively (8-11). However, most of the data are from retrospective, post hoc studies with small and heterogeneous groups (12).

Herein we present the results of a large study of patients with lung adenocarcinoma genotyped for EGFR mutations; the data describe the frequency and the prognosis of uncommon EGFR mutations.

This study was carried out retrospectively using the database of the pathology department of the Hospices Civils de Lyon, Lyon, France, that prospectively collected results of EGFR genotyping for all consecutive patients with lung adenocarcinoma referred for molecular biology testing from 2009 to 2017. The trial was conducted in accordance with the Declaration of Helsinki and the Harmonized Tripartite Guideline for Good Clinical Practice from the International Conference on Harmonization. Patient were informed about this research project on their data and the present study was approved by the institutional ethics committee.

This analysis included all cases, irrespective of clinical stage or specimen origin. Specimens with non-interpretable results or absence of EGFR mutations were excluded. Duplicates (multiple samples for the same patient) were identified and the most relevant analysis was included; the others were excluded. Within each of the four analyzed exons, and using Alamut® Visual software (version 2.11, Interactive Biosoftware, Rouen, France), mutations involving the same amino acids were identified in order to create several molecular subgroups according to the location of the mutations.

The study population included only patients harboring an uncommon EGFR mutation. For these, clinical data was collected using a questionnaire that was sent to the oncologist in charge of the patient. This study was conducted in accordance with Good Clinical Practices and performed after formal agreement by the ethics committee of the Hospices Civils de Lyon. The questionnaire collected data regarding the date of diagnosis, date of death, smoking status, clinical stage, presence of distant metastases, and treatment modalities (surgery, chemotherapy and TKI). Overall survival (OS) was calculated from the time from the date of diagnosis to death or the date of last follow-up. TNM stage was assessed according to the eighth International Association for the Study of Lung cancer (IASLC) Staging Project (13).

Descriptive statistics were carried out to estimate the frequency of uncommon mutations. EGFR mutations was described by mutation location (exon) and type (nomenclature of involved amino acid) and expressed as a percentage. In the studied population, comparison of pathological characteristics between different molecular subgroups was analyzed using the independent t-test for age, and Chi-squared test for sex and smoking status. The Kaplan-Meier method was used for survival analyses. Groups were compared in univariate analysis using the Log-rank test. Multivariate analyses were conducted using a Cox model including the different types of mutation, sex, age, and TNM stage. Hazard ratios (HRs) and their 95% confidence intervals (CIs) were computed. A P value of <0.05 was considered significant, and statistical analyses were performed using RStudio Version 1.1.456, RStudio (Boston, MA, USA). 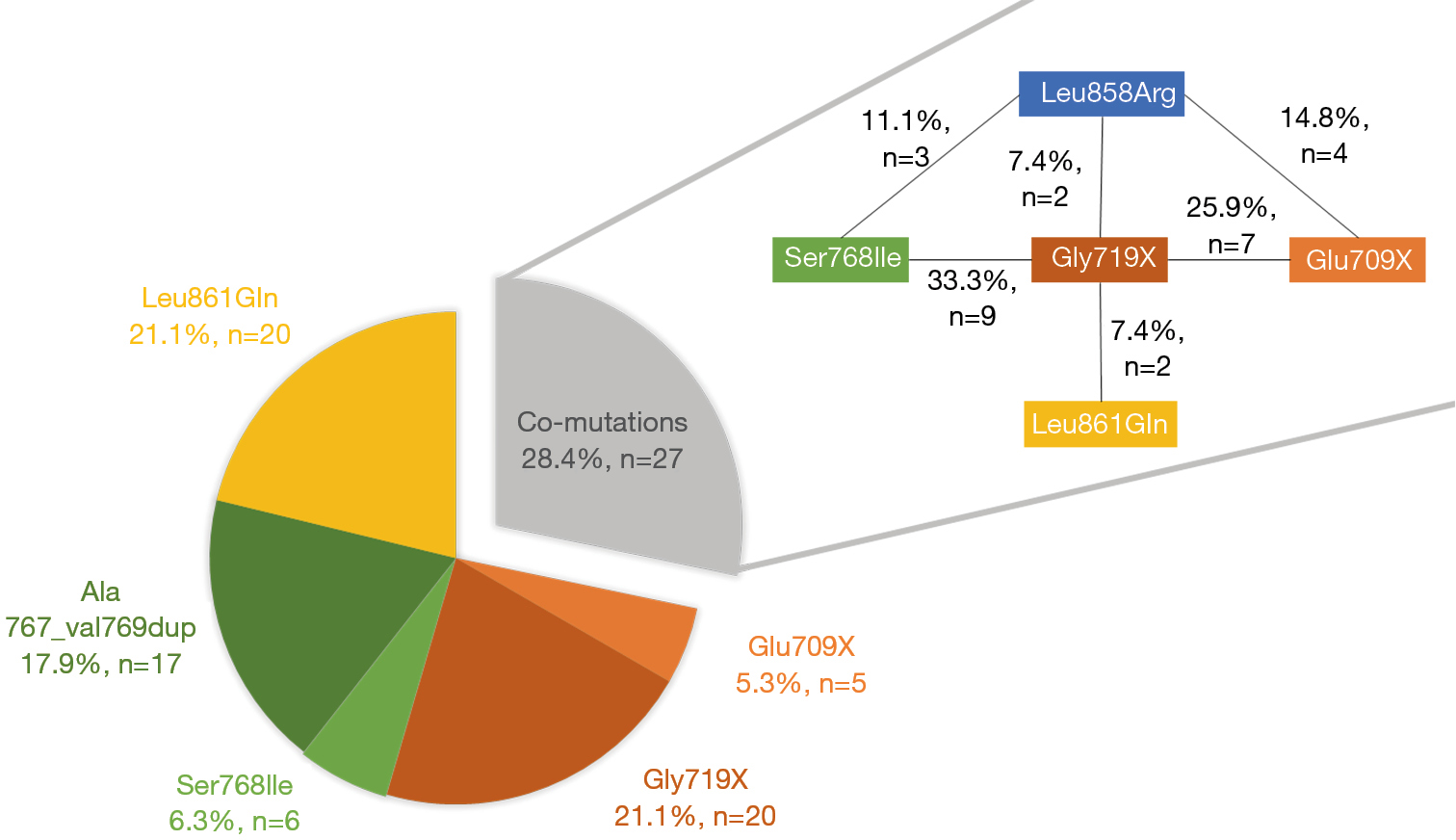 Figure 1 Frequency of uncommon EGFR mutations. Distribution of EGFR uncommon mutations among the 95 patients (left) and the details of the 27 co-mutated samples (right).

The median age of patients with a tumor harboring an uncommon EGFR mutation was 68.3 years (range, 39 to 89 years), 57.8% of patients (55/95) were women and, among those with data, 51.4% (36/70) were current or former smokers (Table 1). Clinical data and follow-up were available for 73 patients (76.8%). Overall, 17 (17.9%) patients underwent surgical resection, including three patients with p.Leu858Arg co-mutation. Among these, nine patients subsequently received systemic treatment including chemotherapy (eight patients), EGFR TKI (three patients), or both (two patients). Eight patients did not receive any subsequent systemic treatment. 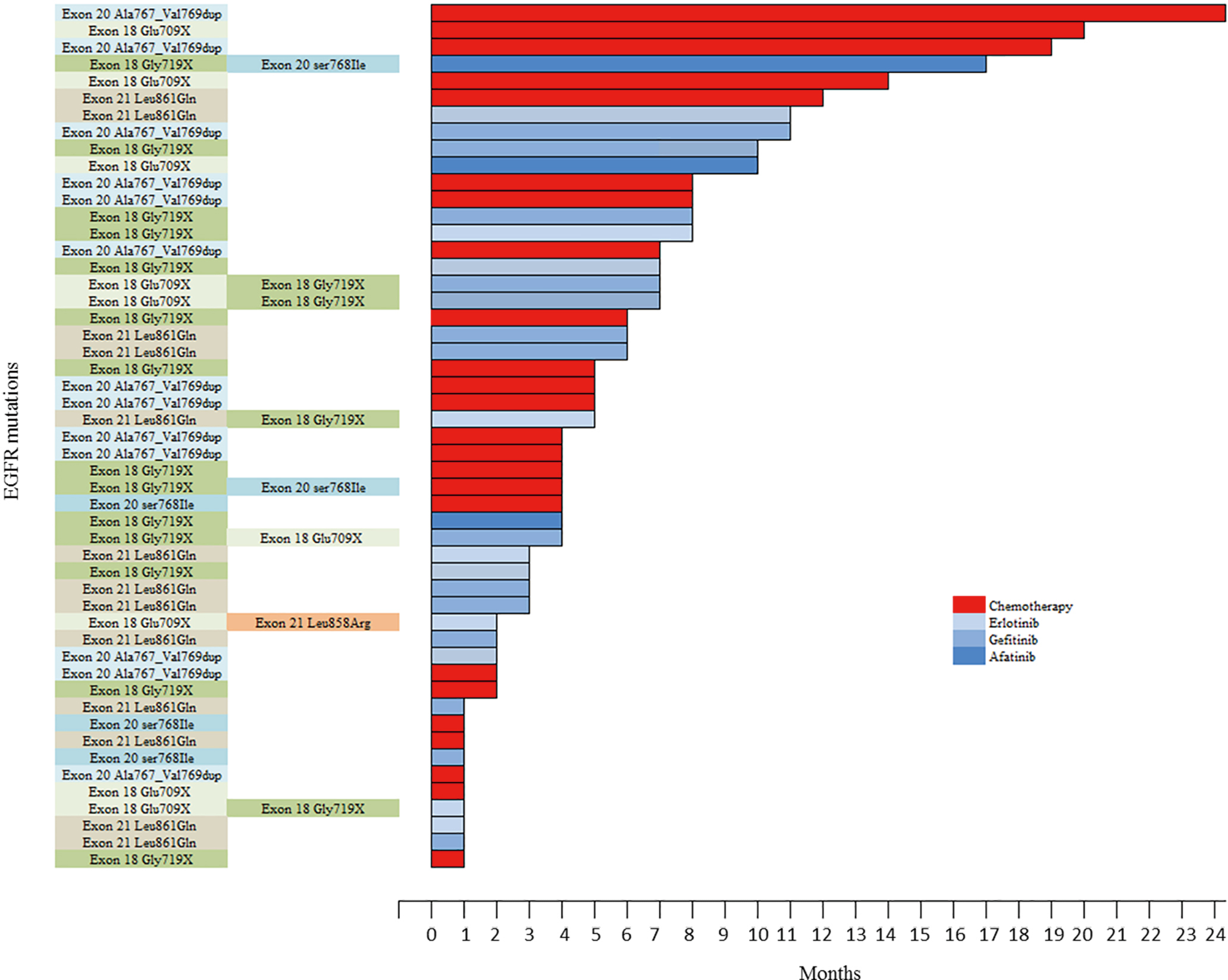 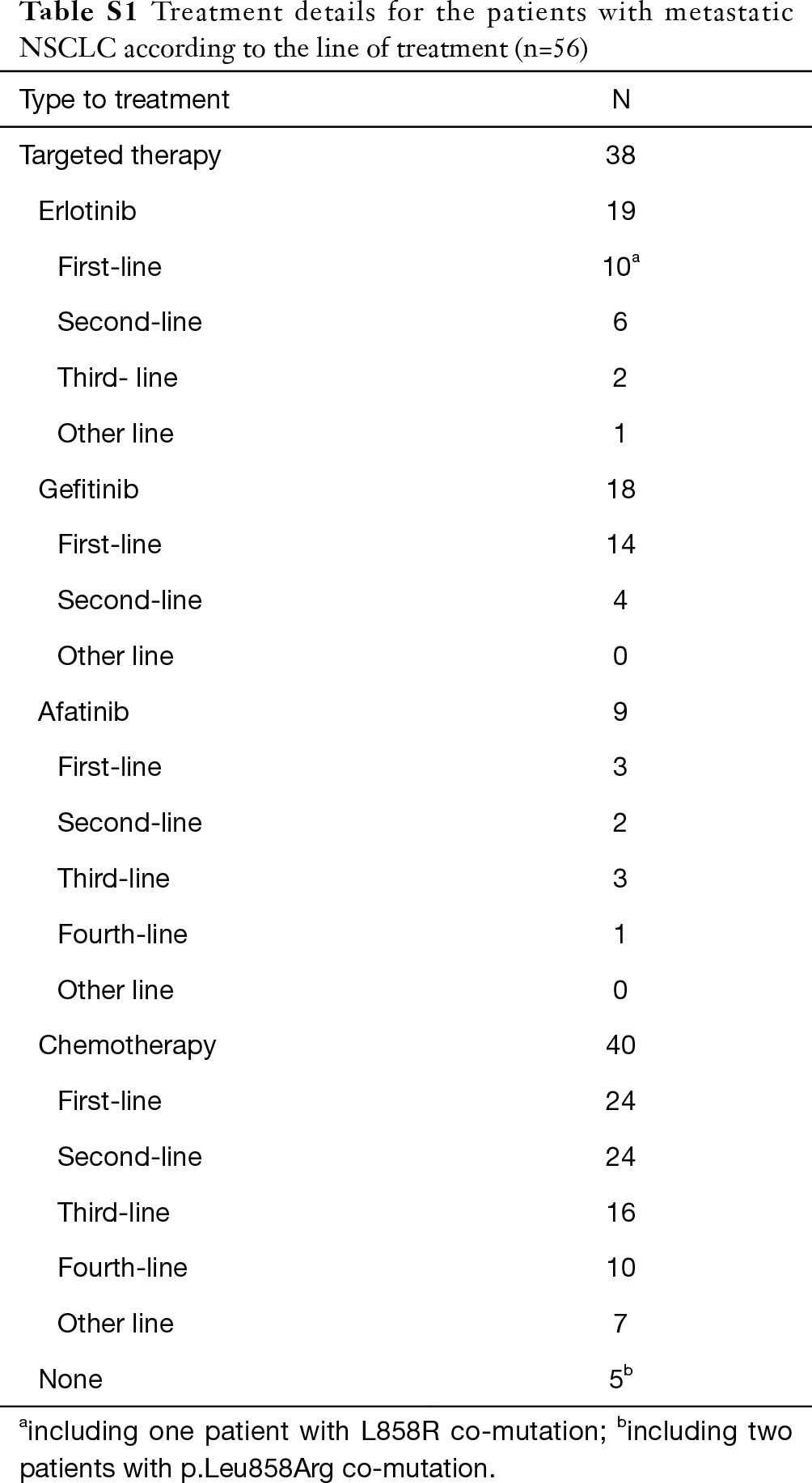 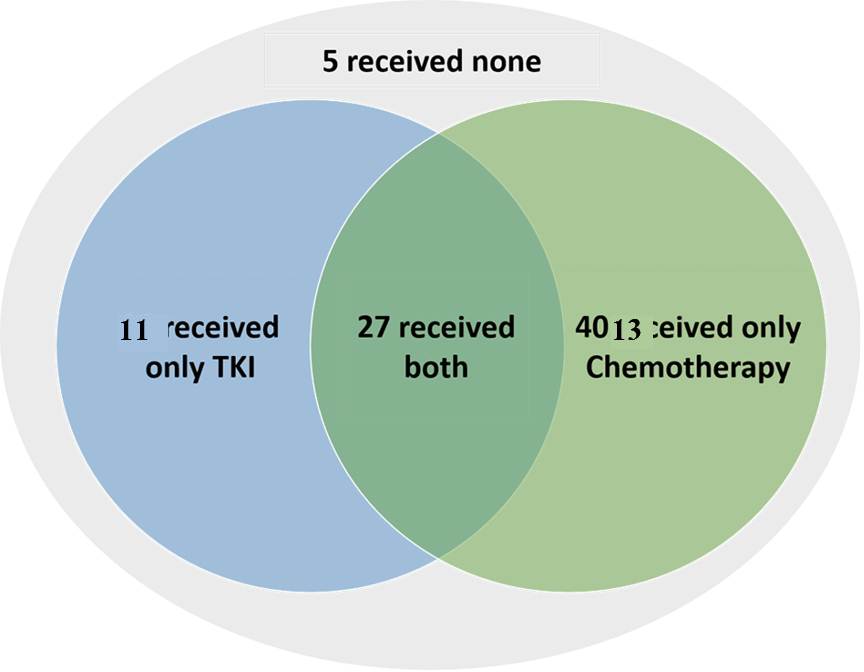 Figure S2 Distribution of patients according to treatment received.

Overall survival according to mutation 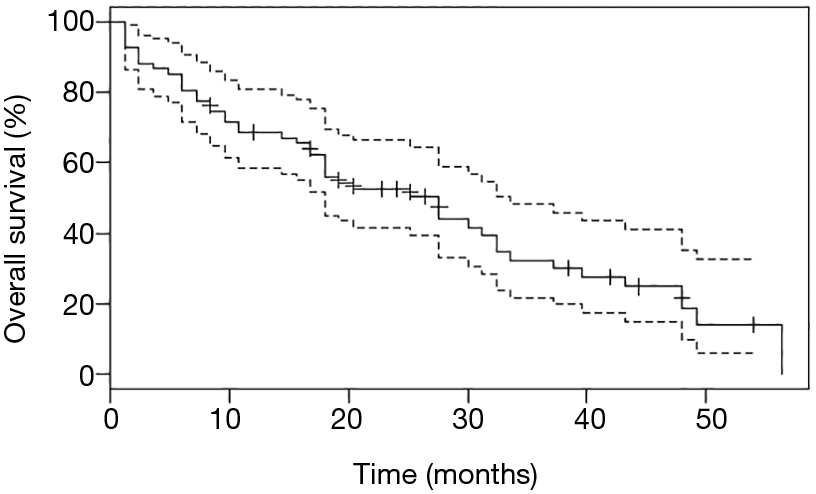 Figure 2 Overall survival (OS) for the study population of patients with uncommon EGFR mutation, after exclusion of those with p.Leu858Arg co-mutations. Point estimate (continuous line) and 95% CI (discontinuous line) are shown. 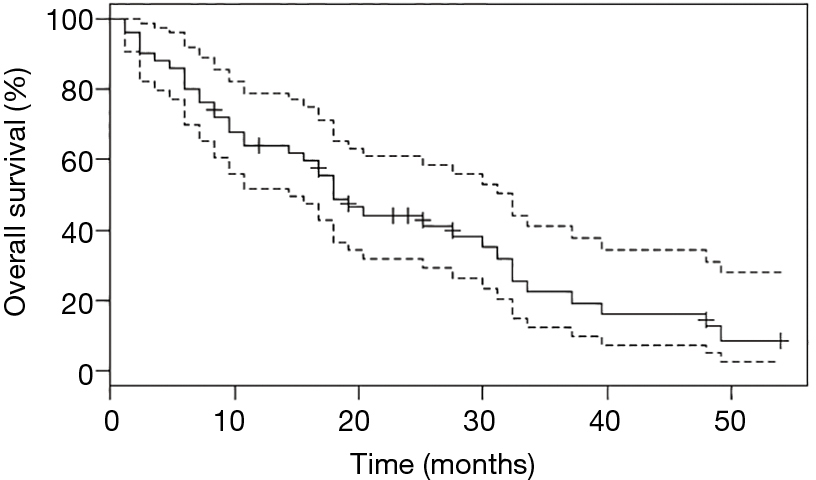 Figure 3 Overall survival (OS) for patients with metastatic NSCLC with uncommon EGFR mutation, after exclusion of those with p.Leu858Arg co-mutation. Point estimate (continuous line) and 95% CI (discontinuous line) are shown. 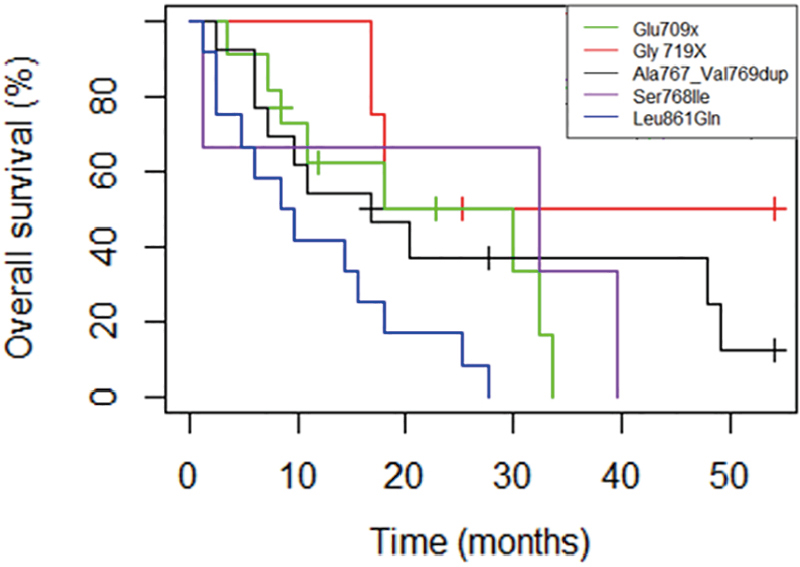 Overall survival according to treatment 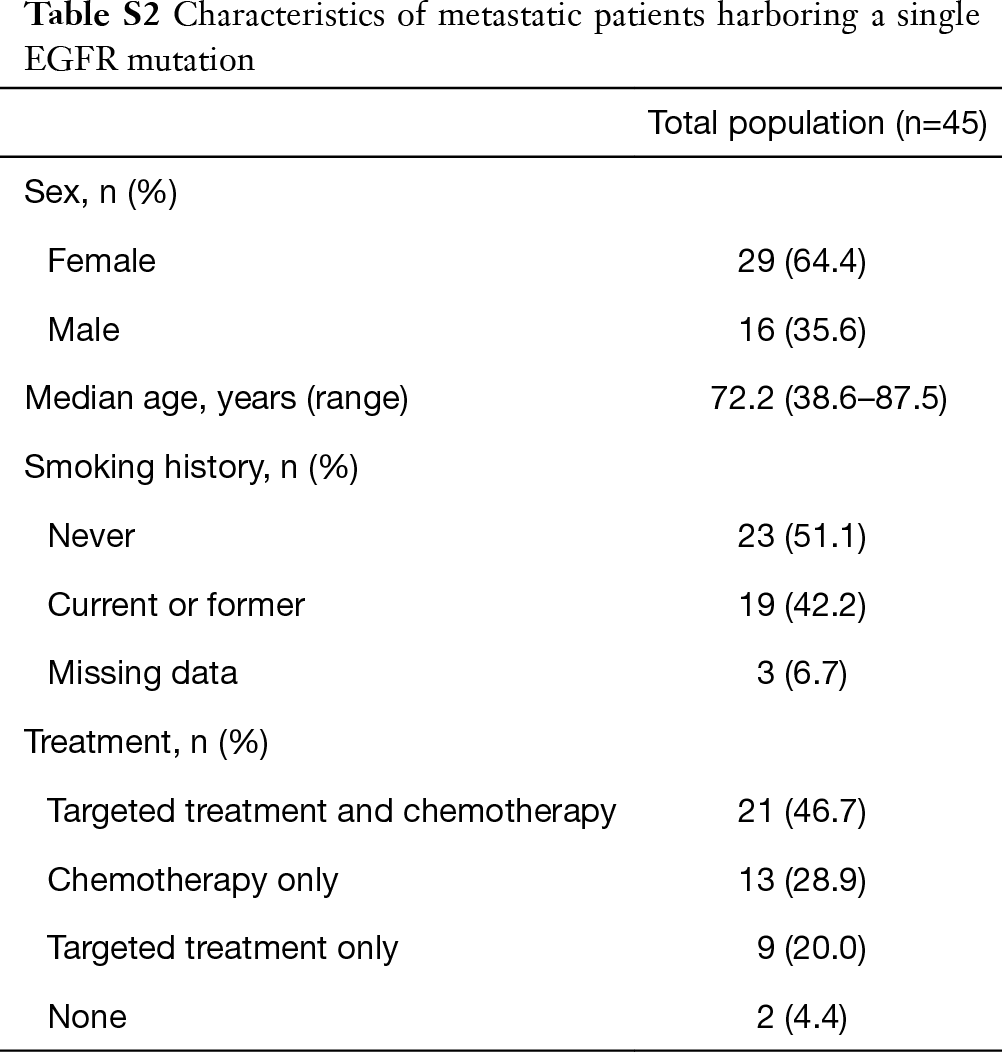 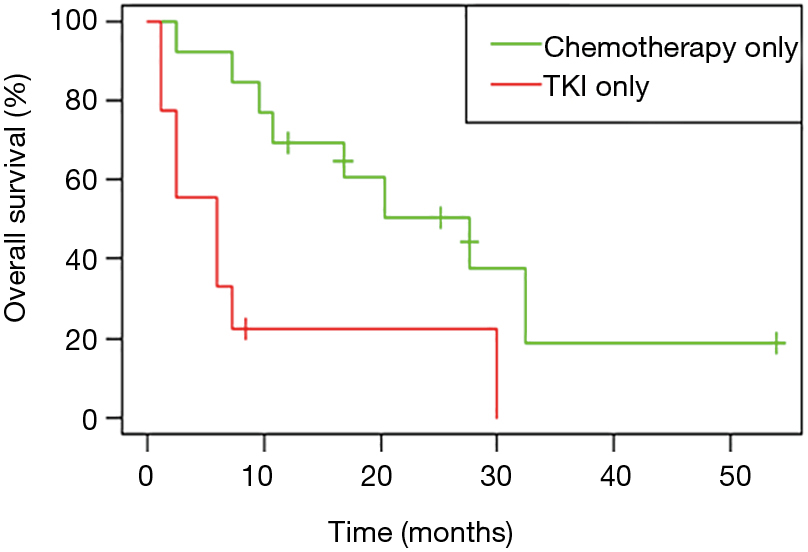 Figure 4 Overall survival (OS) for patients with a single uncommon EGFR mutation according to treatment, all lines (n=22). Patients treated by chemotherapy and TKI were excluded (n=21). 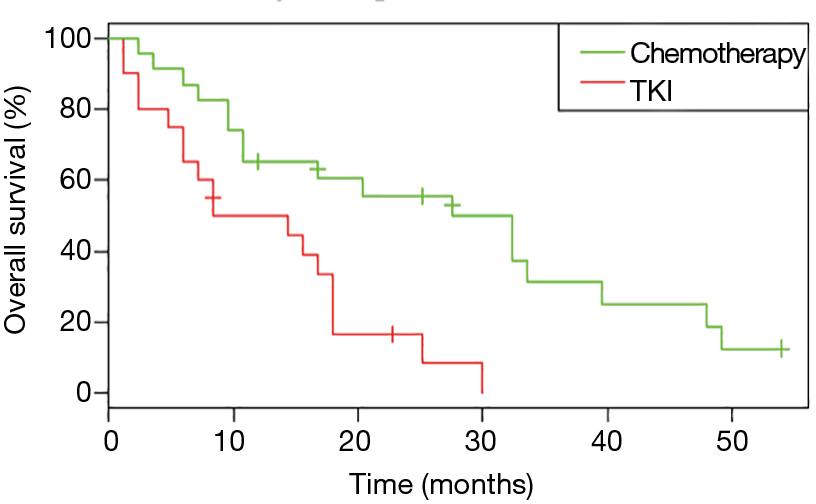 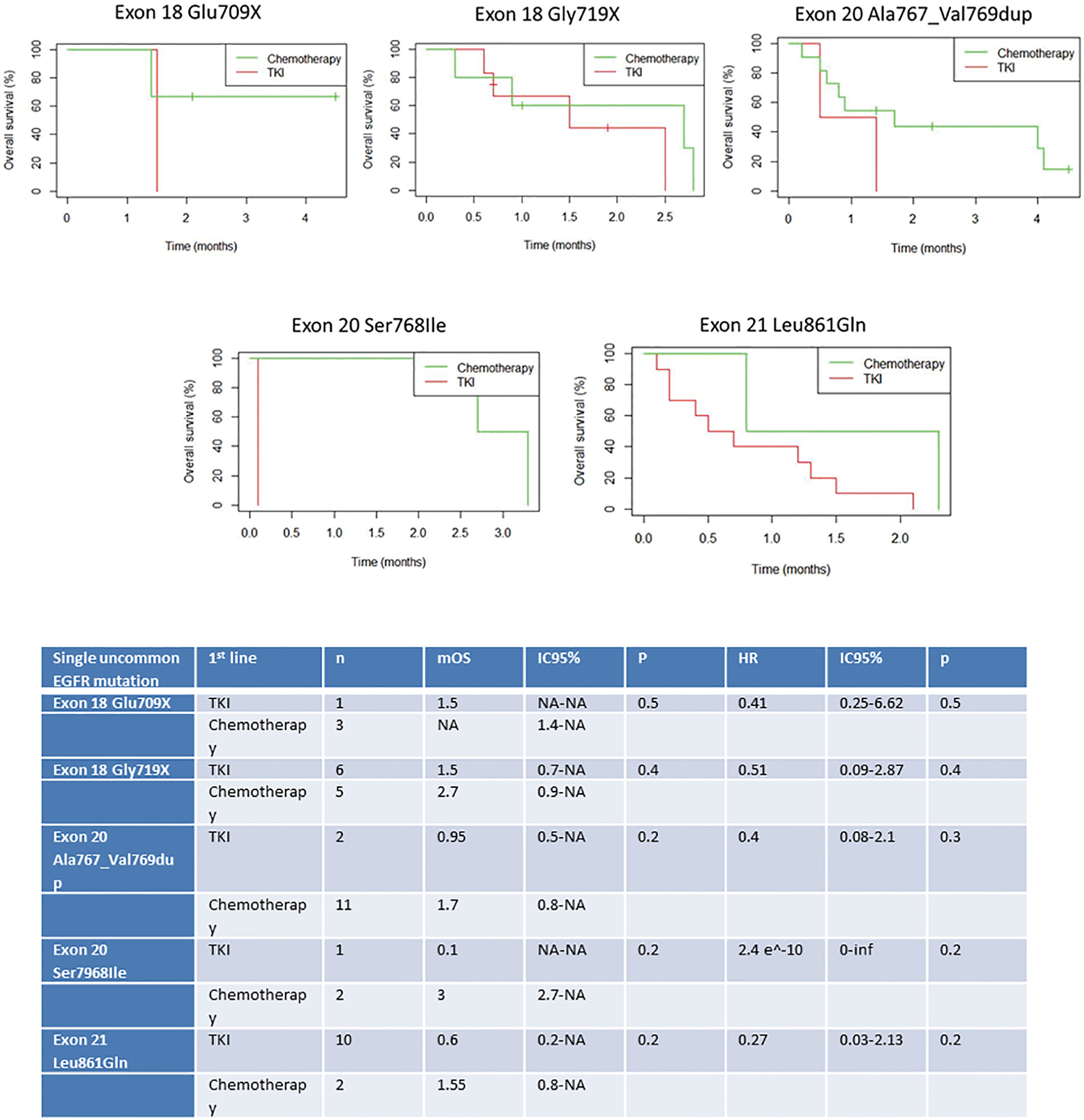 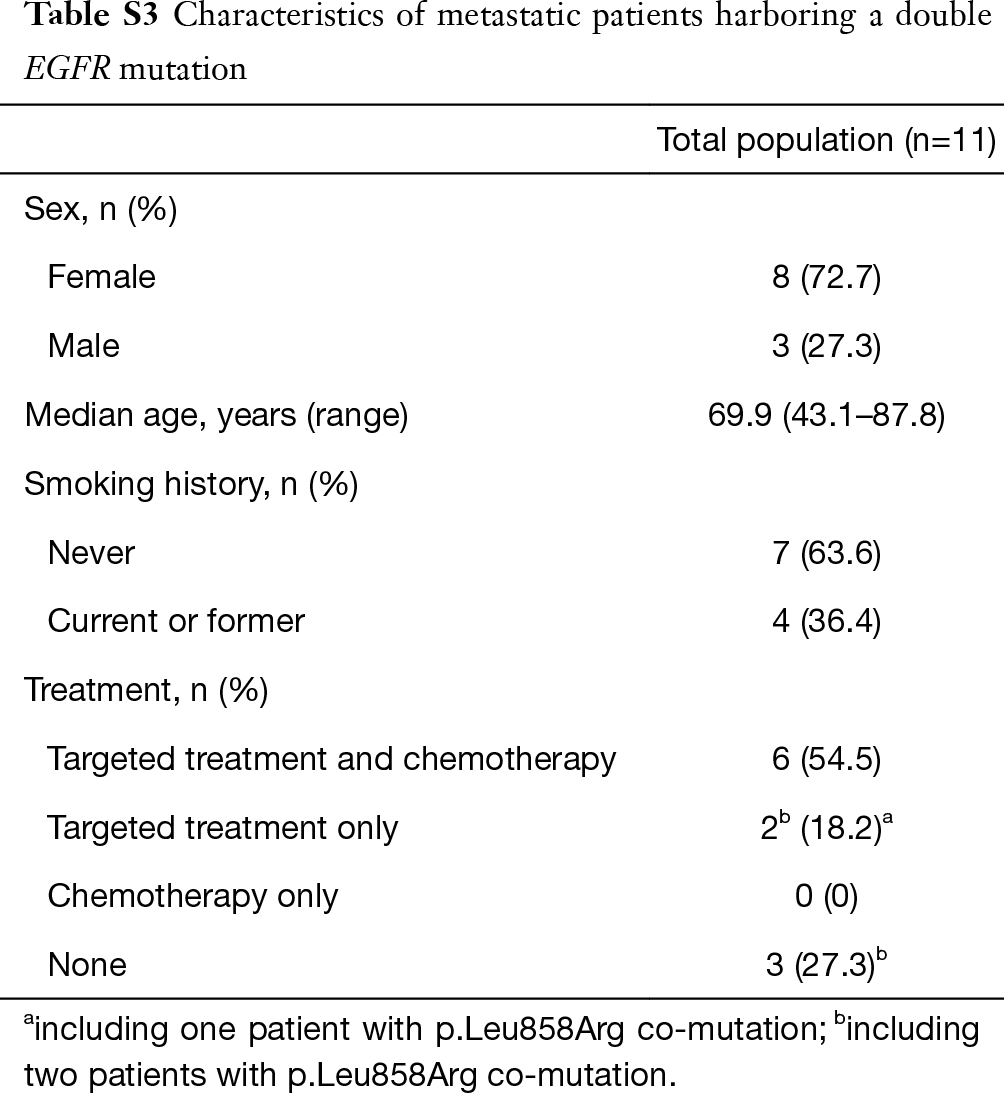 Through the analysis of a large cohort of patients with molecularly-characterized lung adenocarcinomas, the present study shows the variety of therapeutic strategies employed in a real-life setting, and the poor outcomes of the patients harboring uncommon EGFR mutation.

The frequency of uncommon mutations herein was similar to that reported in previous studies in Caucasian patients; in the Biomarqueurs France study, which included 10,117 patients, uncommon EGFR mutations accounted for approximately 10% of all EGFR-mutated cases (2). However, in an Asian cohort of 1261 patients, Wu et al. reported a higher rate (12.4%) of uncommon EGFR mutations (14), while Li et al. reported about 5% uncommon EGFR mutation among 2,043 patients with EGFR mutations (15). Nevertheless, the frequency of uncommon mutations is completely dependent of the technique used in routine diagnosis and therefore limits any interpretation of such data. More interestingly, a higher proportion of current or former smokers was found herein than in Asian EGFR-mutated populations, highlighting the need for systematic genotyping irrespective of patient smoking status (15,16).

A striking finding of the present study is that the choice of treatment for each mutation was variable that reflects the absence of recommendation or consensus for uncommon EGFR mutations. This may be explained by the almost complete lack of evidence for the use of TKIs available during the study period. First-line treatment was chemotherapy for almost half of the metastatic patients; EGFR TKI was the preferred treatment for exon 18 and 21 mutations while most exon 20 mutations received chemotherapy.

The median OS in metastatic patients herein was similar to that was previously reported for uncommon EGFR mutations in clinical trials: in the pooled analysis of the LUX-LUNG 2, 3, and 6 trials in which 38 patients (with tumor harboring uncommon mutations including point mutations or duplications in exons 18–21) were treated by afatinib, the median OS was about 13 months when patients were treated with first-generation TKIs (17,18) and 19.4 months (95% CI: 16.4, 26.9) (6). An important result of this study is that p.Leu861Gln mutations were associated with poor prognosis compared to other uncommon mutations; this is in line with the data reported by Leduc et al. in another cohort of Caucasian patients as most patients with p.Leu861Gln were treated with chemotherapy first and had better progression-free survival (PFS) than patients treated with TKI (8). This is supported by in vitro studies on mutant cell lines that found that p.Leu861Gln mutations enhanced kinase activity via a strong activation of Stat5 but, surprisingly, they seem not increase drug sensitivity to first generation TKI in clinical use (19). In parallel, first-line treatment seems to be a significant predictor of outcome because more than a quarter of patients did not have access to second-line of treatment in the present study, highlighting the potential aggressiveness associated with uncommon EGFR mutations (3). Taken together, these results suggest that chemotherapy should be the first-line treatment in the presence of a p.Leu861Gln mutation.

Another interesting finding of the present study is that patients with double uncommon EGFR mutations receiving any TKI as first-line treatment had better survival compared to patients with single mutations, independently of their association with a p.Leu858Arg mutation. Pilotto et al. reported a trend towards better OS in double EGFR mutated patients; the median OS was 21.3 (95% CI: 0.69, not attained) months in this population compared to 14.5 (95% CI: 8.1, 22.5) for all uncommon mutations (17). Nevertheless, in the latter study, all double mutations included at least one mutation known for sensitivity to first- or second-generation of TKI as p. Leu858Arg or Exon 19 deletions and therefore is not comparable to that reported herein. Kimura et al. did, however, report a case of double uncommon mutation (p.Gly719X and p.Leu861Gln), and found increased sensitivity to afatinib (20), which is confirmed here in a larger population that included other targeted therapies. It is of note that Zou et al. predicted sensitivity to gefitinib/erlotinib for EGFR mutations in NSCLC based on structural interaction fingerprints and multilinear principal component analysis (21); it would therefore be of great interest to study the conformation of the EGFR protein in case of double uncommon mutation in order to explain the gain in TKI sensitivity. More generally, as the presence of a double mutation (be this double uncommon, or uncommon/common) could change TKI sensitivity, we believe that a EGFR sequencing approach is probably better than targeted molecular EGFR analyses as the former are likely to detect such combined mutations.

The present study is one of the largest studies investigating frequency, clinical characteristics, and treatment outcomes of patients with uncommon EGFR mutations. However, it does have some intrinsic limitations related to its retrospective nature; treatments were not distributed in a randomized manner; we were unable to reliably collect PFS data as well as some clinical data such as clinical and imaging features of TKI resistance; moreover, the study started in 2009 and only a few patients received second- or third-generation EGFR TKIs while evidence now exists regarding a potential effectiveness of such inhibitors in case of uncommon EGFR mutations in the first-line and beyond (6,20,22-25). This work should therefore be updated at a later date to take into account these new drugs.

In conclusion, uncommon EGFR mutations may be associated with a poor outcome and the data challenge the use of first-generation TKI in such patients, however first-line TKI is more effective in cases of double uncommon mutations and such patients should be treated accordingly.

Funding: This work was supported by Boehringer Ingelheim by unrestricted grant and by the French national cancer Institute (INCa) through the funding of routine genotyping of EGFR mutations in patients with NSCLC.

Conflicts of Interest: All authors have completed the ICMJE uniform disclosure form (available at http://dx.doi.org/10.21037/jtd-19-3790) . AB reports grants from Boerhinger Ingelheim, during the conduct of the study; MB reports grants from Boerhinger Ingelheim, from null, outside the submitted work. The other authors have no conflicts of interest to declare.

Ethical Statement: The authors are accountable for all aspects of the work in ensuring that questions related to the accuracy or integrity of any part of the work are appropriately investigated and resolved. The trial was conducted in accordance with the Declaration of Helsinki and the Harmonized Tripartite Guideline for Good Clinical Practice from the International Conference on Harmonization. This study was reviewed and approved by the Research Ethics Board of the Hospices civils de Lyon (approval number 17-151) and the Hoffmann-La Roche global review committee. All patients enrolled completed the informed consent form.