The most common underlying structural lung disease, which leads to SSP, is chronic obstructive pulmonary disease (COPD), followed by interstitial lung disease (ILD), malignancy, tuberculosis, cystic fibrosis, and necrotizing pneumonia (6-8). Compared with PSP, SSP is more closely associated with higher morbidity, mortality, and recurrence rates, because of the aforementioned advanced age and underlying structural lung diseases (9,10). Aggressive treatment and prevention of recurrence are important for these reasons (11). Most patients with SSP undergo tube thoracostomy and some undergo additional chemical pleurodesis to stop the air leakage and prevent recurrent pneumothorax (4). In case of persistent air leakage, surgical treatment may be considered in some patients. However, in those with underlying lung disease and suboptimal pulmonary function, surgery is usually avoided at the first episode of pneumothorax (12).

COPD, the most common etiology of SSP, is a heterogeneous syndrome characterized by airflow limitation, as determined by the pulmonary function test (PFT), which is usually caused by the inhalation of cigarette smoke or other noxious particles (13,14). Pulmonary emphysema (PE), one of the components of COPD, is defined as the permanent enlargement of air spaces accompanied by the destruction of gas-exchanging surfaces of the lung (15). Previously, PE was assessed through histological examinations. Advances in imaging technology have made it possible to evaluate PE through computed tomography (CT). As a result, PE have been described in CT images and include subtypes such as centrilobular, panlobular, and paraseptal emphysema (16).

PE can make patients more susceptible to pneumothorax and is one of the most commonly observed radiographic finding in the CT scans of patients with SSP (17,18). Nevertheless, few studies have evaluated the recurrence rate, risk factors associated with recurrence, and the outcomes of the treatment of pneumothorax in patients with PE (19,20). Severe COPD with FEV1 <1 L has been reported to be associated with an increased risk of SSP (3). However, PE without airflow limitation was observed in 17% of the subjects in a previous study (21). Therefore, this study aimed to investigate the recurrence rate, treatment outcomes, and risk factors related to the recurrence of pneumothorax, diagnosed through CT scans, in patients with PE. We present the following article in accordance with the STROBE reporting checklist (available at http://dx.doi.org/10.21037/jtd-20-1557B).

The study was conducted in accordance with the Declaration of Helsinki (as revised in 2013). The study was approved by the Institutional Review Board for Human Research of Yonsei University Wonju Severance Christian Hospital (CR-319180). Informed consent was waived of the retrospective nature of the research. Also, only de-identified data extracted from medical records prior to analysis were used in the study.

The current study involved a retrospective review of the medical records of all patients who presented with spontaneous pneumothorax at Wonju Severance Christian Hospital, a tertiary care hospital in South Korea, from March 2013 to February 2019. The records of 164 patients, who presented with SSP in the emergency department of our institution, were reviewed. Patients with pneumoconiosis (n=24), pulmonary tuberculosis or non-tuberculous mycobacterial disease (n=15), pneumonia (n=13), ILD (n=11), malignancy (n=2), or bronchiectasis (n =1) were excluded from the study, resulting in 98 patients with PE. Additionally, 49 patients who did not undergo PFT after complete resolution of pneumothorax were excluded from the study. Consequently, 49 patients were included in the current study (Figure 1). 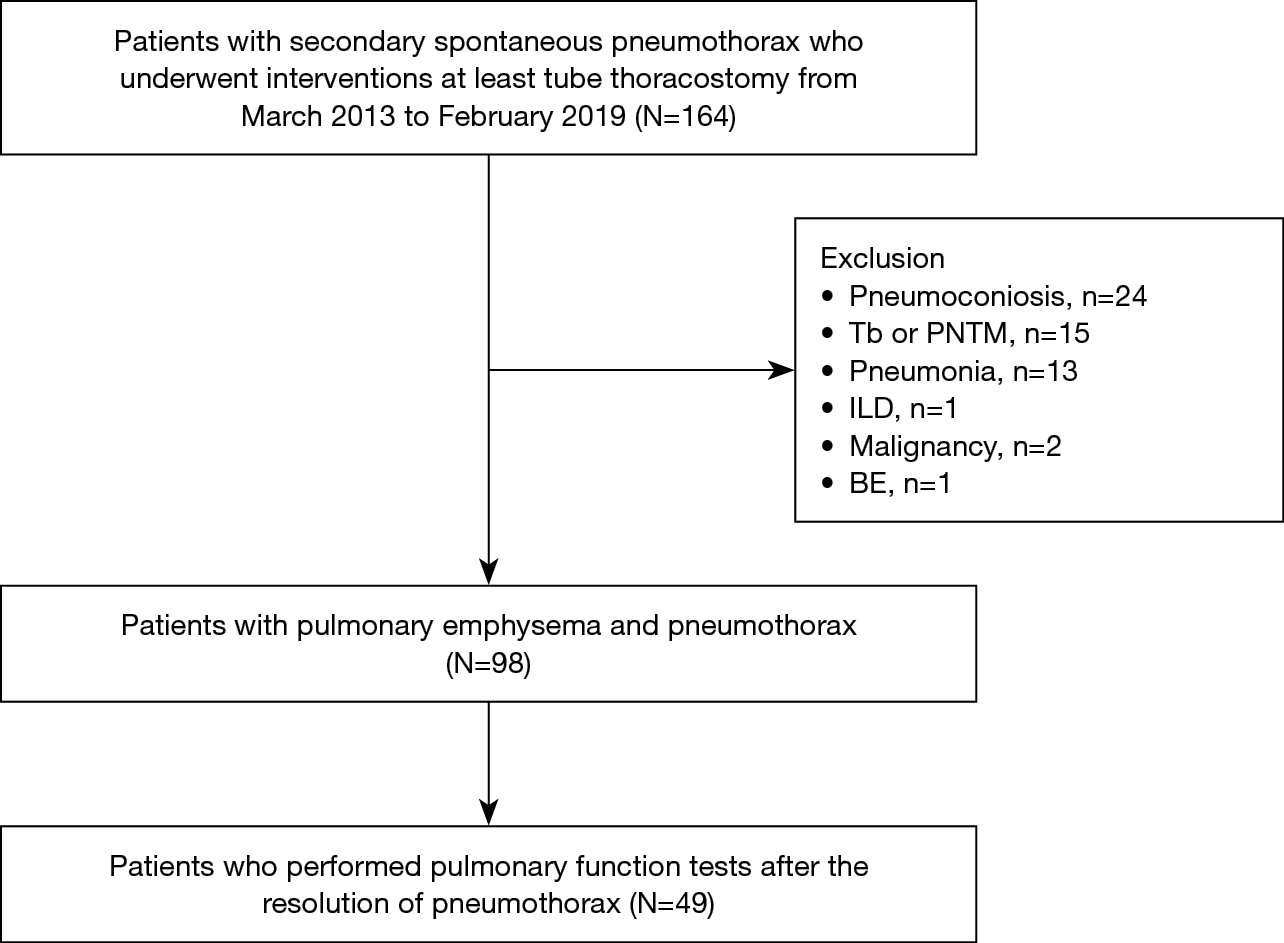 The present study reviewed the following characteristics of each patient: age, sex, weight, height, body mass index (BMI), history of tobacco smoking, laboratory data, chest CT images used for the diagnosis of pneumothorax, previous history of pneumothorax, and treatment methods received to resolve the pneumothorax. PFT was performed after the recovery from pneumothorax, which was considered to be resolved after the removal of chest tube, along with the observation of radiographic evidence for pneumothorax resolution on a chest X-ray. Additionally, the current study evaluated the recurrence rates of ipsilateral and contralateral pneumothorax. In the present study, the recurrence of pneumothorax was defined as the emergence of a pneumothorax after discharge, which was the primary cause of re-admission and subsequently, required management (20).

After hospital admission, a 20- or 24-French chest tube was inserted under local anesthesia. As per the established guidelines, air leakage lasting for more than 5 days was considered as prolonged air leakage (11,22). In these cases of prolonged air leakage, the management involved either chemical pleurodesis [extract of Viscum album (Abnoba Viscum, Abnoba GmbH, Germany)] via chest tube on bed-side or video-assisted thoracoscopic surgery (VATS); as determined by an attending physician, who consulted a respiratory physician and a thoracic surgeon, and based on the patient’s conditions such as cardiopulmonary reservoir and past medical history.

Spirometry was performed using a Vmax 22 system (CareFusion, Yorba Linda, CA, USA) according to provisions discussed by the American Thoracic Society/European Respiratory Society (23). Absolute values of the volume of air forcibly exhaled from the point of maximal inspiration (forced vital capacity, FVC) and the volume of air exhaled during the first second of the method (forced expiratory volume in 1 second, FEV1) were obtained and the ratio of the predicted values of FEV1 and FVC were calculated using a formula obtained from a the reference values, based on age, sex, race, and height (24,25).

The data obtained are presented as either numbers (%) or medians [interquartile range (IQR)]. The Mann-Whitney U-test was used to compare continuous variables. The Kaplan-Meier method was used to estimate the recurrence rates after the primary episode of pneumothorax. A multivariable Cox proportional hazard regression analysis with backward stepwise selection, with P<0.05 for the entry of variables and P>0.10 for the removal of variables, was used to identify prognostic factors associated with recurrence. Results obtained are presented as hazard ratio (HR) with 95% confidence interval (CI). Statistical differences were considered significant at P<0.05. All statistical analyses were performed using SPSS software version 23.0 (IBM Co., Chicago, IL, USA).

The clinical characteristics of the patients involved in the present study are presented in Table 1. All the patients were male. The median age was 72 years, and 32 (65.3%) patients were above the age of 65 years. The median height and BMI were 164 cm and 21.1 kg/m2, respectively. Moreover, all the patients were former or current smokers. The median serum level of albumin was 4.1 g/dL and the median partial pressure of carbon dioxide (CO2) was 33 mmHg. The most common type of emphysema observed was the centrilobular type (n=23, 46.9%). Regarding the affected side, 28 (57.1%) and 21 (42.9%) cases were affected by pneumothorax of the right and left side of the thoracic cavity, respectively. Cases that developed pneumothorax on both sides of the thoracic cavity were not detected in the present study. 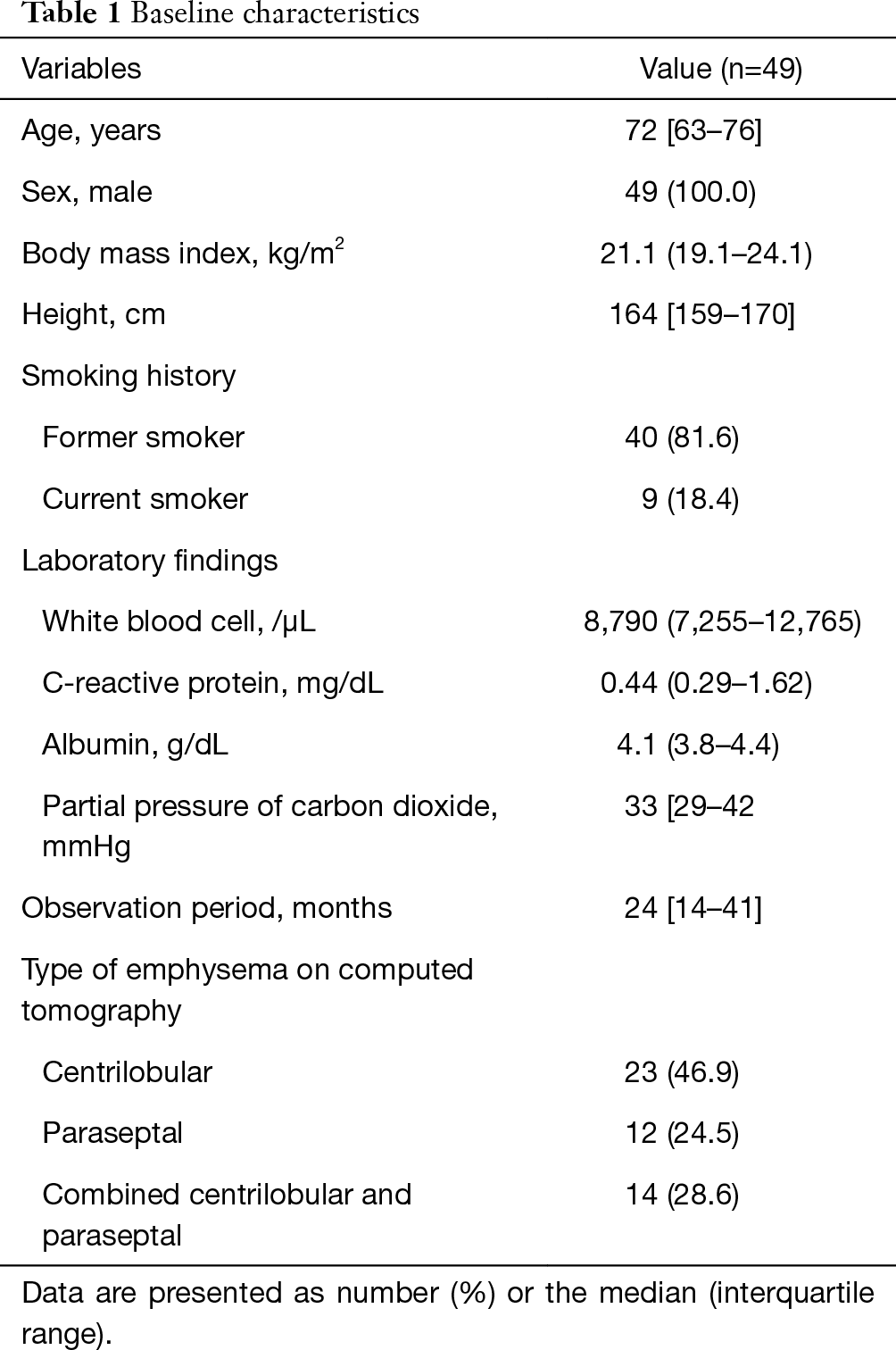 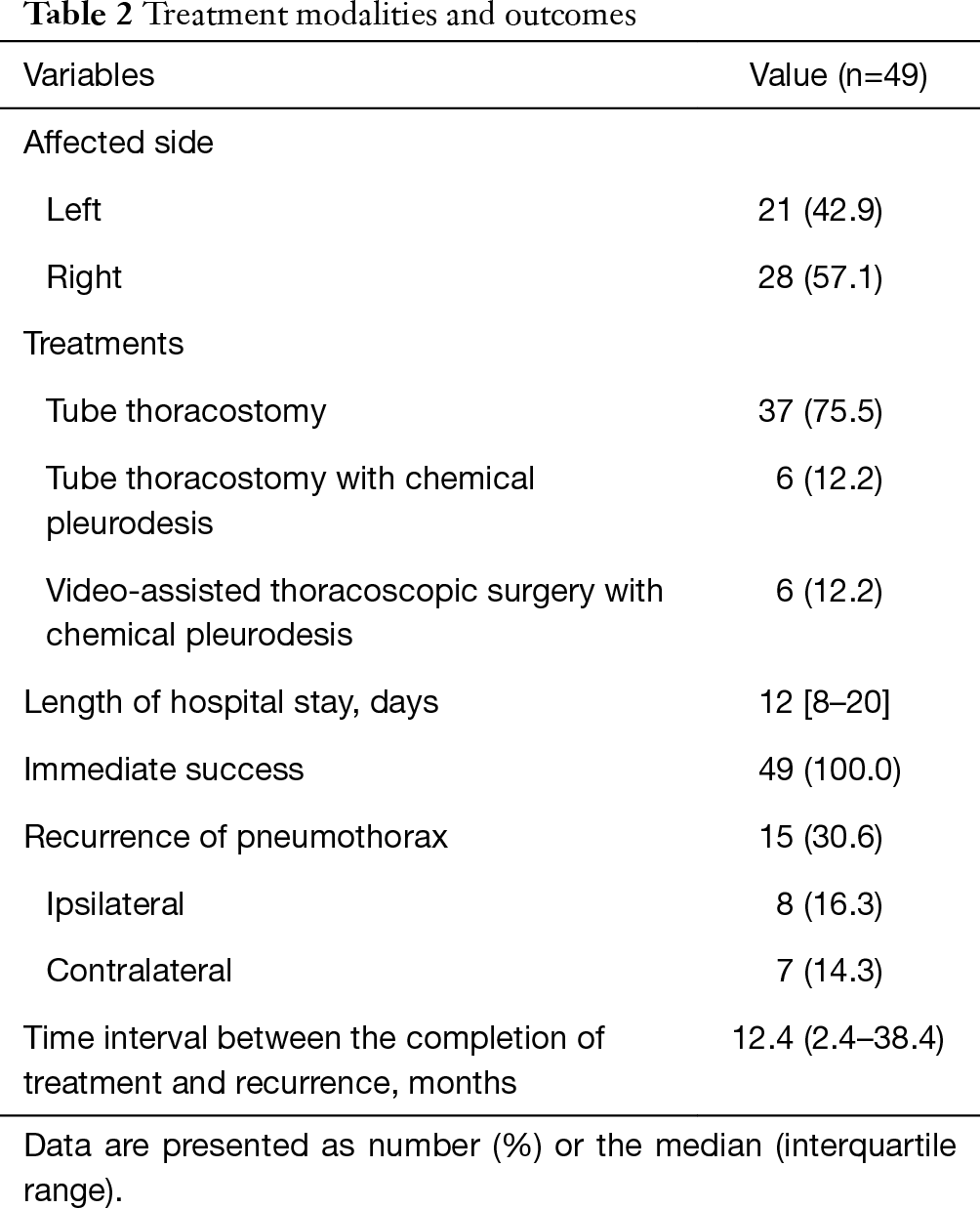 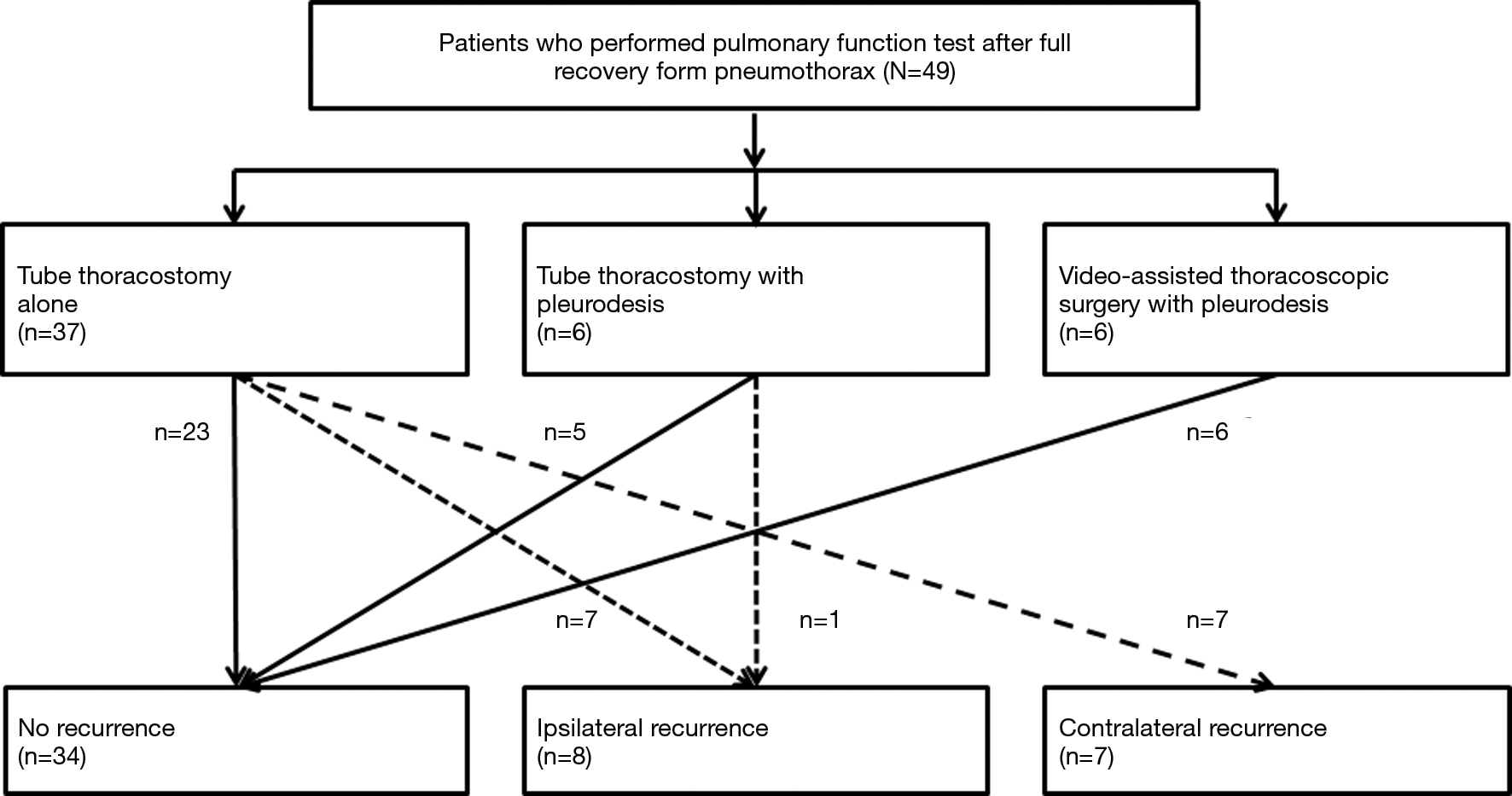 Figure 2 Management of pneumothorax and treatment outcomes at the study population. 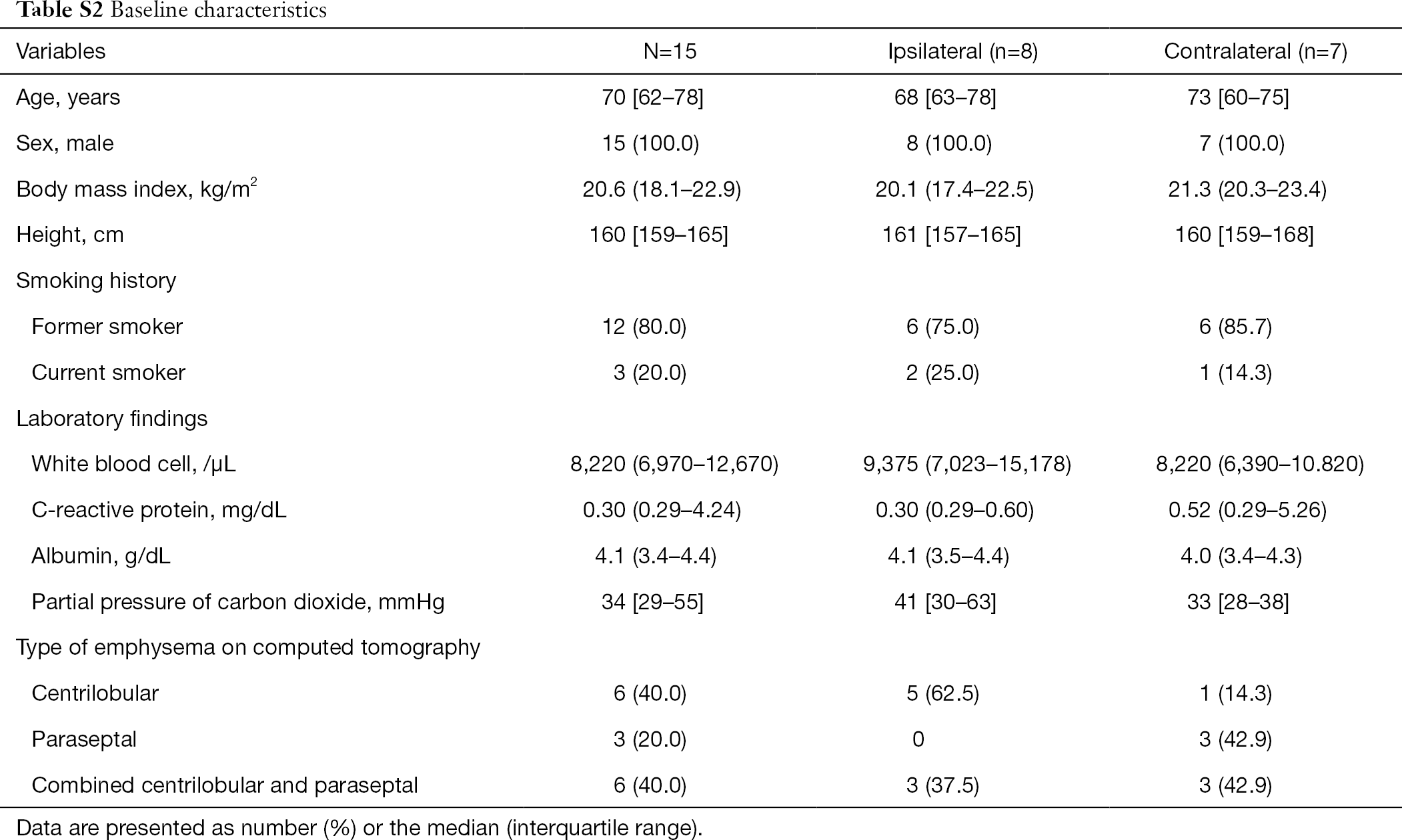 Univariable and multivariable Cox proportional hazard regressions were performed to evaluate the prognostic factors related to recurrence (Table 4). In univariable analysis, partial pressure of CO2 (unadjusted HR 1.041; P=0.040) and FEV1 (unadjusted HR 0.477; P=0.049) were observed to be significantly associated with pneumothorax recurrence. Multivariable analysis revealed that decreased FEV1 (adjusted HR 0.408; P=0.025) showed a positive association with recurrence, whereas additional treatments such as chemical pleurodesis or VATS were not observed to be significantly associated with recurrence, compared with tube thoracostomy alone (adjusted HR 3.427; P=0.241). 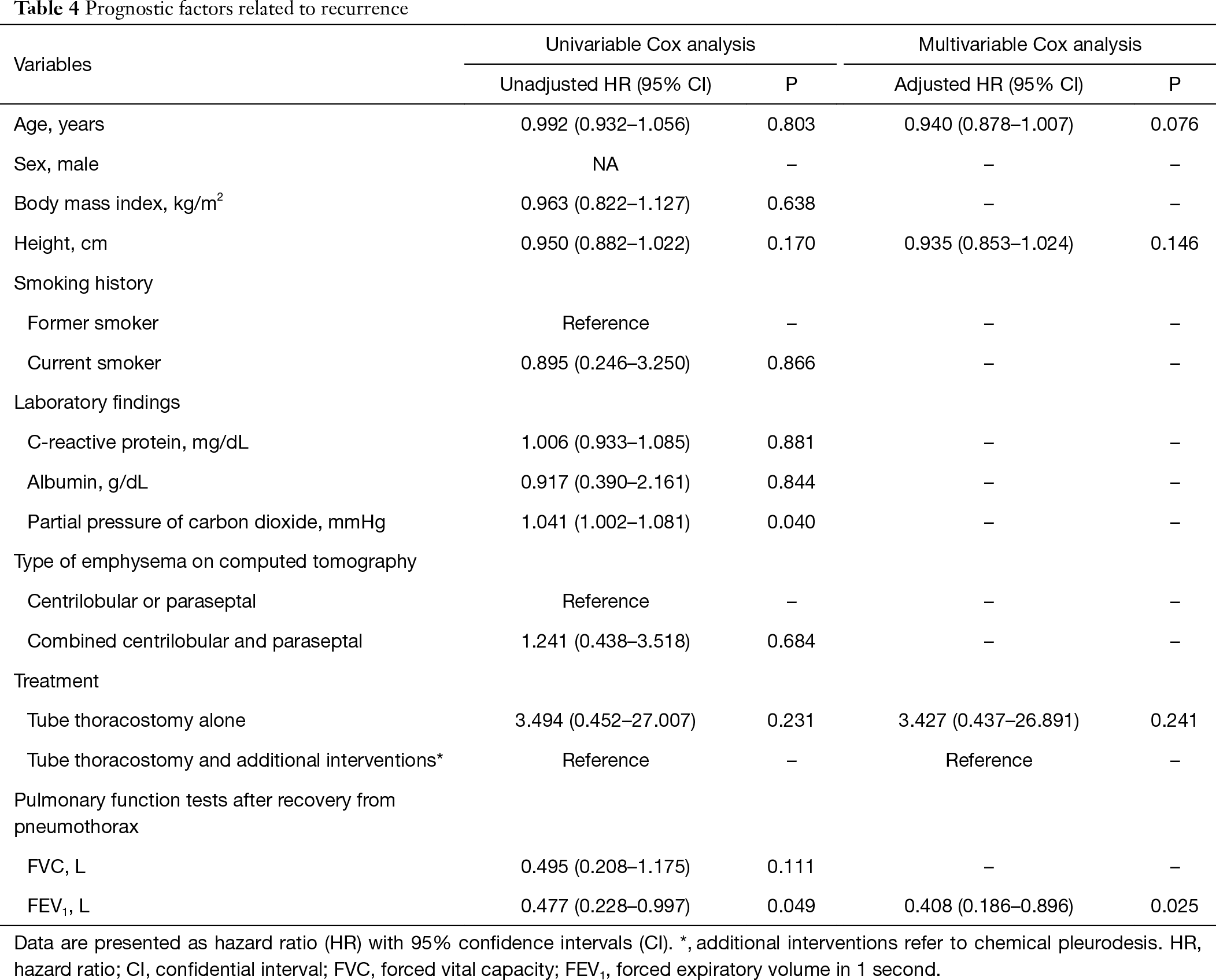 Pneumothorax causes chronic morbidity in patients with chronic lung disease worldwide (26,27). A recent study showed that 14 patients per 100,000 populations in the United States were hospitalized due to pneumothorax in the year 2016; among which, 61% of patients had chronic lung disease, a majority were elderly and had PE (7). In the present study, the median age of patients was 72 years and all the patients exhibited PE.

It is an established fact that tube thoracostomy with pleurodesis or VATS with pleurodesis cannot be performed in all patients, in order to reduce the recurrence rate of pneumothorax; considering the general condition of patients with diminished pulmonary reserve. Hence, follow-up of the patients who underwent suboptimal treatment is very important. However, no standardized strategies have been established regarding the observation protocols and periodic examinations for the prevention of recurrent pneumothorax in such patients (8). According to the previous guidelines, patients with SSP should be followed up by a respiratory physician to evaluate and manage the underlying lung disease (11). However, this is not followed in actual clinical practice, in which many patients with SSP do not undergo regular follow-up by a respiratory physician or PFT. The present study observed that 49 among the 98 patients did not undergo PFT, after the complete resolution of pneumothorax. Some of the patients were referred back to their primary medical institutions after discharge and others had improved respiratory symptoms and refused further evaluation of the underlying lung disease (29).

The current study has certain limitations. Primarily, it was based on retrospective data, which could have led to a selection bias. The follow-up protocol used for the prevention of pneumothorax was not standardized and some patients did not undertake PFT or were lost to follow-up. Therefore, in the current study, the recurrence rate of pneumothorax might have been underestimated. Moreover, the study was performed in a single institution and involved a limited number of subjects. Furthermore, the treatment for pneumothorax was decided by the attending physician, owing to the fact that no standardized treatment protocols have been established for the patients with underlying lung disease and suboptimal lung function.

Reporting Checklist: The authors have completed the STROBE reporting checklist. Available at http://dx.doi.org/10.21037/jtd-20-1557B

Conflicts of Interest: All authors have completed the ICMJE uniform disclosure form (available at http://dx.doi.org/10.21037/jtd-20-1557B). The authors have no conflicts of interest to declare.

Ethical Statement: The authors are accountable for all aspects of the work in ensuring that questions related to the accuracy or integrity of any part of the work are appropriately investigated and resolved. The study was conducted in accordance with the Declaration of Helsinki (as revised in 2013). The study was approved by the Institutional Review Board for Human Research of Yonsei University Wonju Severance Christian Hospital (CR-319180). Informed consent was waived of the retrospective nature of the research. Also, only de-identified data extracted from medical records prior to analysis were used in the study.