(I) We evaluate the number of tumor cells in the liquid based cytology slide before EGFR mutation detection. Samples satisfied with more than 50 tumor cells and visible sediment were extracted DNA after centrifugation. If the sample fails to meet this standard, we will suggest the physicians or patients to resample to avoid invalid EGFR detection. (II) We estimated the diameter of precipitation of liquid based cytology specimens. DNA and RNA which can be used to detect anaplastic lymphoma kinase (ALK) and c-ros oncogene 1 receptor tyrosine kinase (ROS1) genes were extracted at the same time, when the diameter was between 2–5 mm. For specimens with precipitation diameter >5 mm, the residual cell pellet was resuspended in the solution and then was divided equally into 2–1.5 mL centrifuge tube. DNA and RNA were extracted separately. The workflow model is listed in Figure 1. 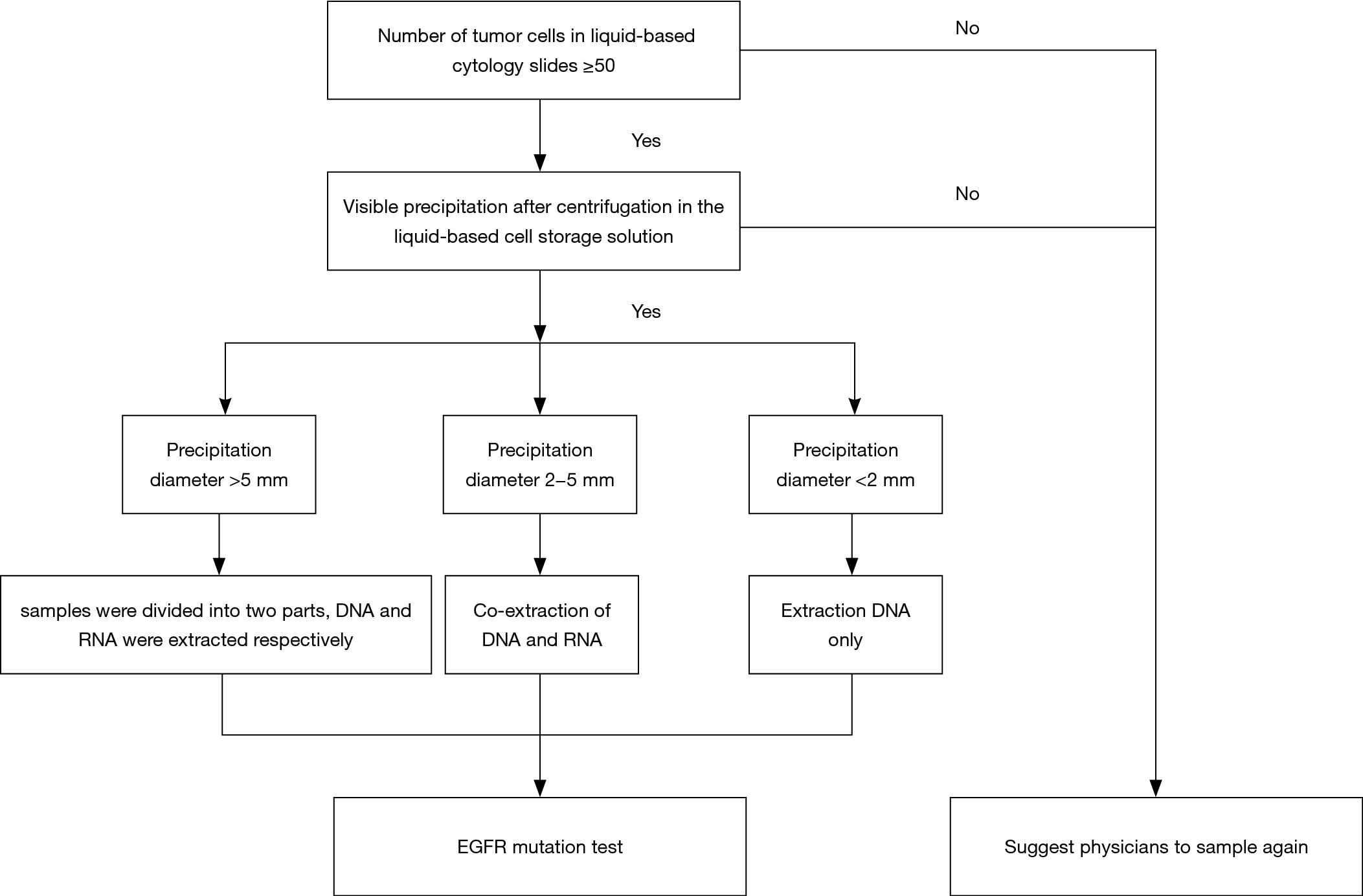 (I) Liquid based cytological specimens stored in ThinPrep (hologic Gen probe) preservation solution were centrifuged for 12,000 r/min, 3 minutes, and precipitation was transferred to 1.5 mL centrifuge tube. (II) The total DNA was extracted using an AmoyDx DNA Kit (Amoy Diagnostics Co, Xiamen, China) according to the manufacturer’s instructions. The quality and quantity of the DNA was measured on an FLx800 Spectrophotometer (BioTek Instruments, Inc., USA).

(I) For FFPE samples, wax block was cut into 3 rolls (10 µm thick/roll). And then put rolls into 1.5 mL centrifuge tube. (II) Add 1 mL dimethylbenzene into centrifuge tube to dewax (56 °C, 15 min), and then centrifuge for 12,000 r/min, 3 minutes, repeat this step. (III) Discard the supernatant, neutralize the residual dimethylbenzene with anhydrous ethanol. (IV) The total DNA was extracted using an AmoyDx DNA Kit (Amoy Diagnostics Co, Xiamen, China) according to the manufacturer’s instructions. The quality and quantity of the DNA was measured on an FLx800 Spectrophotometer (BioTek Instruments, Inc., USA). 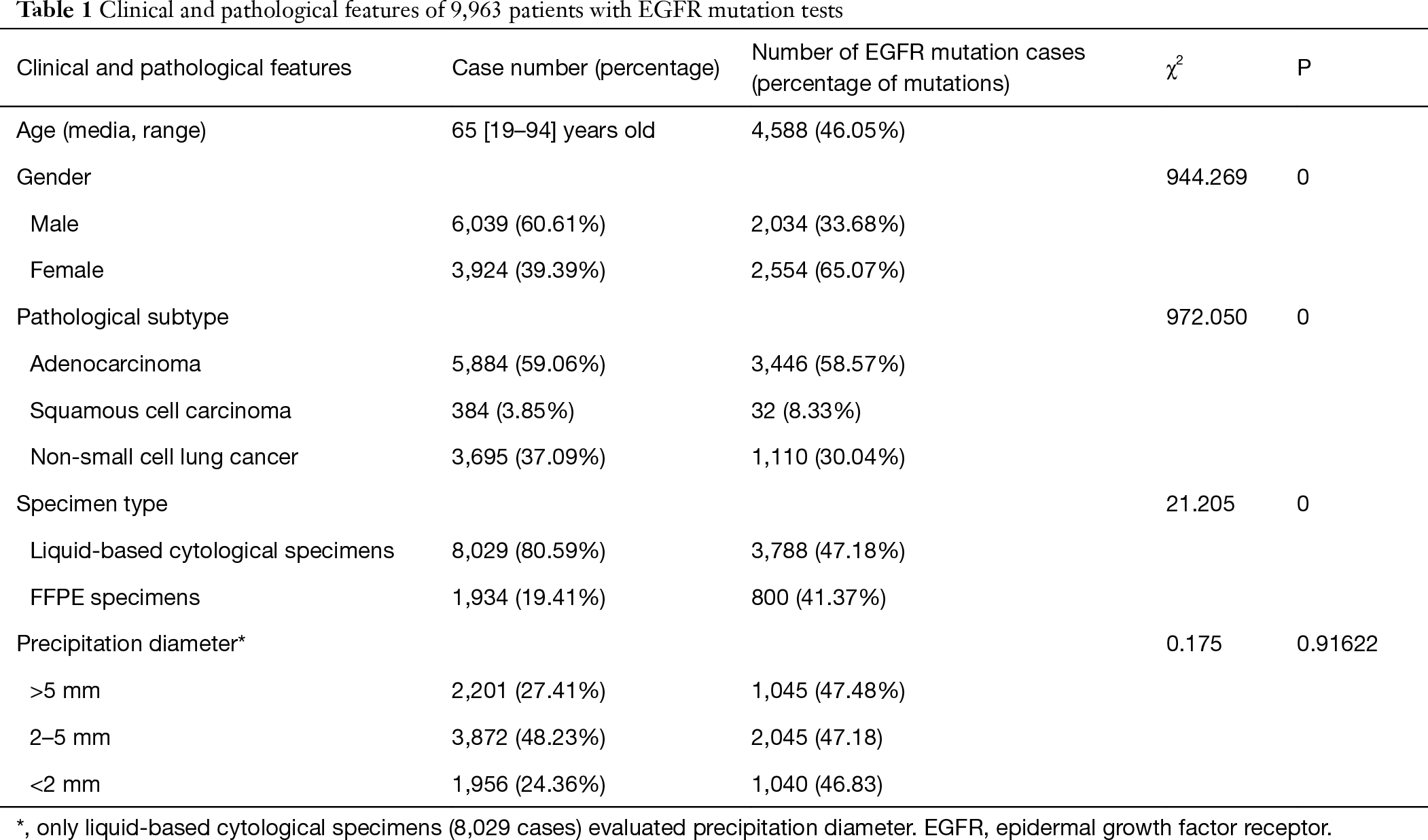 EGFR mutations in different sample types of liquid based cytology

Efficacy of TKI therapy in patients with EGFR mutations

It’s very important for NSCLC patients to detect drive mutation, as it’s essential for therapeutic regime and prognosis. In various types of drive mutation, EGFR gene mutation is the most frequent one (10). Accurately screened out EGFR mutations in NSCLC can significantly improve the prognosis of patients. To NSCLC patients without indication of surgery, cytology specimen is the only pathological sample available. Cytology samples can not only provide pathological diagnosis, but also can be used to detect gene mutation in NSCLC patients (11). In addition to liquid based specimens, cell block embedded specimens and cell smear scraping specimens are also used for molecular detection (12,13). However, it is difficult to make a cell block embedded specimen successfully in case of little cells, and cell smear, sometimes as the only pathological slide of patients, will not be filed after scraping. Liquid based cytology is the preferred specimen for molecular detection in Cleveland Clinic in the United States, according to Doxtader et al. (14). Therefore, the use of liquid based cytology is particularly important for the detection of gene mutation. In our previous study, we established an evaluation system of EGFR mutation detection by liquid based cytology specimens. Here, we summarized our previous experience regarding EGFR gene mutation based on 8,029 cases of cytology samples and evaluated the mutation frequency of EGFR in NSCLC patients in China.

The EGFR mutation rate of NSCLC patients tested by liquid based cytology samples was quite different in literatures (3,4). There are many associated factors. The most important one is related to the pre-treatment of specimens and the establishment of evaluation before EGFR mutation test. A large number of samples were explored in our laboratory in the early stage, and the evaluation of tumor cell content of liquid-based cytology samples before molecular detection was established, and it was applied to daily work. For the cases with less than 50 tumor cells in the liquid based cytology slide, it is not recommended to use this liquid based cytology sample for EGFR mutation detection. Even if the diameter of centrifugation precipitation is large, there are possibility to have plenty of normal epithelial cell or other components mixed. In this case, the tumor cells account for less, when the EGFR mutation test result is negative, it may be a false negative. It is recommended to sample again or use more sensitive detection methods, such as super arms PCR, to detect molecular mutation. It is also not suitable to test the samples with too small sedimentation diameter which was invisible to the naked eye, because the results also have the possibility of false negative, and also the high cost of gene test brings the patients high economic burden. If there is no other samples obtained or no chance to resample again, EGFR mutation test can be done by this unqualified sample after fully communication with patients and clinicians, however, it is not recommended to carry out test in daily work.

In our study, the EGFR mutation rate in women was significantly higher than that in men. And the EGFR mutation rate was highest in AC and lowest in SCC, which was consistent with the literature (15). Further analysis showed that the EGFR mutation rate in AC and NSCLC tested by liquid based cytology samples was higher than FFPE samples. It has been reported that cytology samples can provide high quality DNA for molecular detection, and the results are consistent with those of FFPE samples including surgical resection samples and biopsy samples (16). Because of the high proportion of tumor cells in cytology specimens, cytology specimens were more suitable for molecular detection according to Roy-Chowdhuri et al. (17). On the other hand, for liquid based cytology specimens, pathological diagnosis only depends on cell morphology. Poor differentiation NSCLC lacks the typical cell morphology of AC and SCC, and cannot be further defined by immunohistochemistry, resulting in a proportion of poorly differentiated AC, SCC, adenosquamous cell carcinoma and large cell carcinoma in NSCLC group of cytological specimens. Therefore, the EGFR mutation rate was higher in NSCLC group. We believe that EGFR should be tested in NSCLC patients, especially those who depend on cytological diagnosis, so as to avoid missing the opportunity of EGFR TKI treatment.

According to the different sampling methods, the liquid based cytology samples are divided into FNA, PE, sputum, bronchial brush, BALF and EBUS-TBNA samples. Among these samples, we found PE had the highest EGFR mutation rate, reaching 63.35%. There are two reasons for the high EGFR mutation rate in PE. First, AC is the most common pathological type of malignant pleural effusion in lung cancer patients (18). Secondly, a series of recent reports showed that lung cancer has large heterogeneity in tumor (19). For example, the gene characteristics of primary and metastatic lesions will also be different, and the DNA of tumor cells can also be released into PE through necrosis or apoptosis of tumor cells (20). Therefore, PE can detect the presence of gene mutation better than a biopsy sample with limited tumor cells (20). In recent years, many studies have also shown that the detection of driving mutation in PE can provide reliable molecular detection results for patients treated with TKI, and even the supernatant of pleural effusion with negative cytological diagnosis can also be used as reliable liquid biopsy samples (21,22). PE can be collected quickly, minimally invasive and repeatedly. For patients with advanced NSCLC patients with PE, it is recommended to send PE samples for EGFR mutation detection and EGFR TKI treatment monitoring.

For NSCLC patients with EGFR-exon 19 deletions or an exon 21 Leu858Arg mutation, EGFR TKIs can improve response rates, time to progression, and overall survival. Consist with literature (23), we found the ORR was 53.27% and disease control rate (DCR) was 91.59%, only 8.41% patients showed PD in 1month. There are different mechanisms of acquired resistance to EGFR TKIs. T790M mutation, HER2 amplification, MET amplification and small cell lung cancer transformation are among the highest (23).

In conclusion, EGFR detection with liquid-based cytological sample is less invasive and easy to obtain samples. When establishing standardized process and evaluation system of samples, it can provide accurate detection results to guide TKI treatment, and it can also monitor drug resistance of NSCLC patients after TKI treatment. It is recommended to promote its application. In addition, EGFR mutation detection is still recommended for patients with NSCLC, especially diagnosed with cytology samples. In all kinds of cytology specimens for the EGFR detection, PE is first choice.

Funding: This research was supported by Shanghai Municipal Commission of Heath and Family Planning (NO. 201740134).

Reporting Checklist: The authors have completed the MDAR reporting checklist. Available at http://dx.doi.org/10.21037/jtd-20-2750

Ethical Statement: The authors are accountable for all aspects of the work in ensuring that questions related to the accuracy or integrity of any part of the work are appropriately investigated and resolved. The study was conducted in accordance with the Declaration of Helsinki (as revised in 2013). Ethical approval for the study was obtained from the ethical committee of Shanghai Pulmonary Hospital (approval number: L20-331Y), and written informed consent was obtained from the patients.

Open Access Statement: This is an Open Access article distributed in accordance with the Creative Commons Attribution-NonCommercial-NoDerivs 4.0 International License (CC BY-NC-ND 4.0), which permits the non-commercial replication and distribution of the article with the strict proviso that no changes or edits are made and the original work is properly cited (including links to both the formal publication through the relevant DOI and the license). See: .