Lung adenosquamous carcinoma (ASC), consisting of histologic components of both squamous cell carcinoma and adenocarcinoma, with each component accounting for at least 10% of the tumor, comprises 0.4–4% of all lung cancers (1,2). Several clinic-pathological variables have been found as prognostic biomarkers in surgically resected lung ASC, including pathological subtype, sex, and TNM stage (3,4). However, the prognostic significance of routine immunohistochemical (IHC) markers, such as CEA, p53, CK20, CK5/6, PE10, ERCC1, Napsin A, RRM1, Ki67, CK7, P63, EGFR, HER2 and TTF1, remains elusive in lung ASC.

Lung ASC is reported to be more aggressive than the major types of non-small cell lung cancer (NSCLC) and postoperative recurrence poses a great challenge to surgeons and oncologists (2,5). In order to optimize adjuvant therapy for completely resected lung ASC, the clinical patterns and risk factors of postoperative recurrence should be investigated (6). Additionally, the clinical value of adjuvant radiotherapy remain controversial. Postoperative radiotherapy has repeatedly been demonstrated to improve survival among patients with pN2 NSCLC in retrospective studies and large population cohorts, but has not been justified in prospective randomized clinical trials (7-10). Whereas, the clinical value and potential candidate of adjuvant radiotherapy in lung ASC are seldom reported. Additionally, we presented the following article in accordance with the STROBE reporting checklist (11) (available at http://dx.doi.org/10.21037/jtd-20-1979).

Consecutive patients who underwent surgical resection with curative intention and had pathologically confirmed lung ASC from January 2007 to December 2017, were retrospectively enrolled. Exclusion criteria included neoadjuvant therapy, a second primary tumor, compromised resection, positive surgical margins, and death due to surgical complications. The main reason that patients receiving neoadjuvant therapy were excluded was neoadjuvant therapy may significantly alter the incidence and clinical patterns of postoperative recurrence. Our study followed The Declaration of Helsinki (as revised in 2013). The institutional review board of Fudan University Shanghai Cancer Center approved the study (approval number 090977-1). Informed consent was waived by the institutional review board because this was a retrospective study.

Curative surgery was carried out for each patient with systematic multilevel mediastinal lymph node dissection or adequate mediastinal sampling. Adjuvant radiotherapy was performed in line with our institutional protocol (15), using the intensity-modulated radiation therapy technique employing a linear accelerator with 6-MV X-rays. The total dose was generally about 50.4 Gy, prescribed to the planning target volume and administered 1.8 Gy per fraction daily, 5 days per week. The decision of adjuvant radiotherapy was at the discretion of the treating physicians.

Follow up was at the discretion of the treating physicians, with chest computed tomography (CT) scans and ultrasonography of abdominal and cervical regions regularly performed, while brain magnetic resonance imaging (MRI) and bone scanning were not mandatory. In general, patients were followed up every 3 months in the first 2 years, every 6 months in the third to fifth years after surgery, and annually thereafter, in the clinic. Telephone follow-up calls were also implemented.

Disease-free survival (DFS) was calculated from the date of surgery to the documentation of initial postoperative recurrence or death due to any causes. Kaplan-Meier method was used to estimate survival, and differences among groups were investigated by the log-rank test. The prognosticators of overall recurrence were identified using the Cox proportional hazard regression model. The indicators of loco-regional recurrence were selected using competing risk methodology and Stata version 13.1 software (StataCorp, College Station, TX, USA). The time to site-specific recurrence or loco-regional recurrence, was censored by the time of documentation of postoperative recurrence, among patients who developed other types of recurrences first. Statistical analysis was performed using SPSS 21.0 (SPSS, Chicago, IL, USA). All assessment is considered to be significant when two-sided P value is less than 0.05.

A total of 176 patients were enrolled in this study and a flowchart for patient selection in this study was presented in Figure S1. Detailed disease characteristics of the enrolled patients, are illustrated in Table 1. Of note, EGFR mutations were detected in 97 patients, including 44 EGFR L858R mutations, 49 EGFR exon 19 deletions, 1 EGFR G719X mutation, 1 EGFR T790M mutation and 2 EGFR exon 20 insertions. 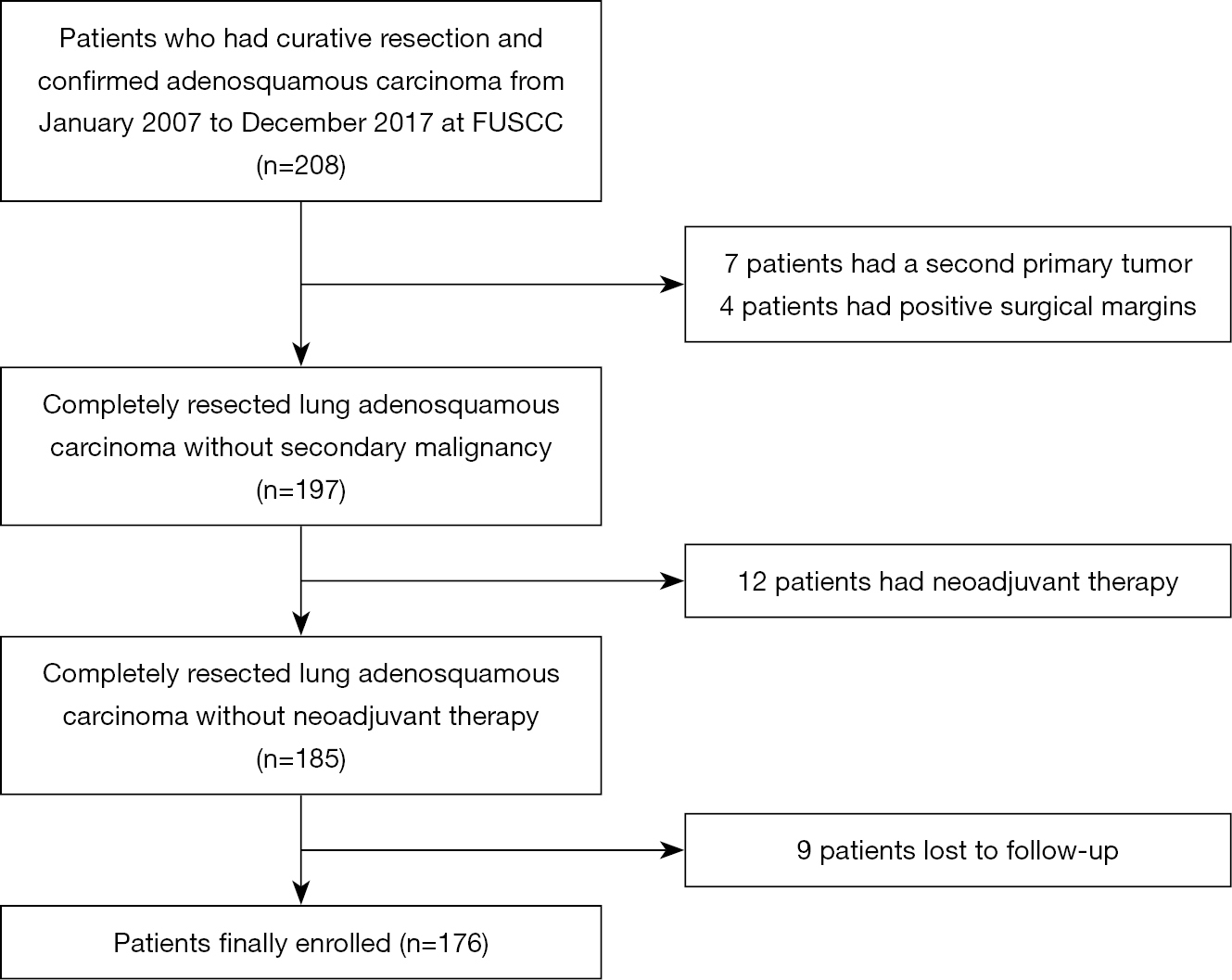 Post-surgery, 110 patients received adjuvant systematic therapy, consisting of chemotherapy in 101 patients, EGFR targeted therapy in seven patients, a combination of chemotherapy and EGFR targeted therapy in two patients. Besides, 35 patients received adjuvant radiotherapy according to the institutional guideline developed in 2004 (15). In addition, 63 patients did not receive any adjuvant treatment. With a median follow up of 35.0 (range, 3.0–138.0) months, disease recurrence occurred in 95 patients. The 1-, 3-, 5- and 10-year cumulative rate of recurrence was 25.8%, 55.8%, 63.1% and 76.5%, respectively. 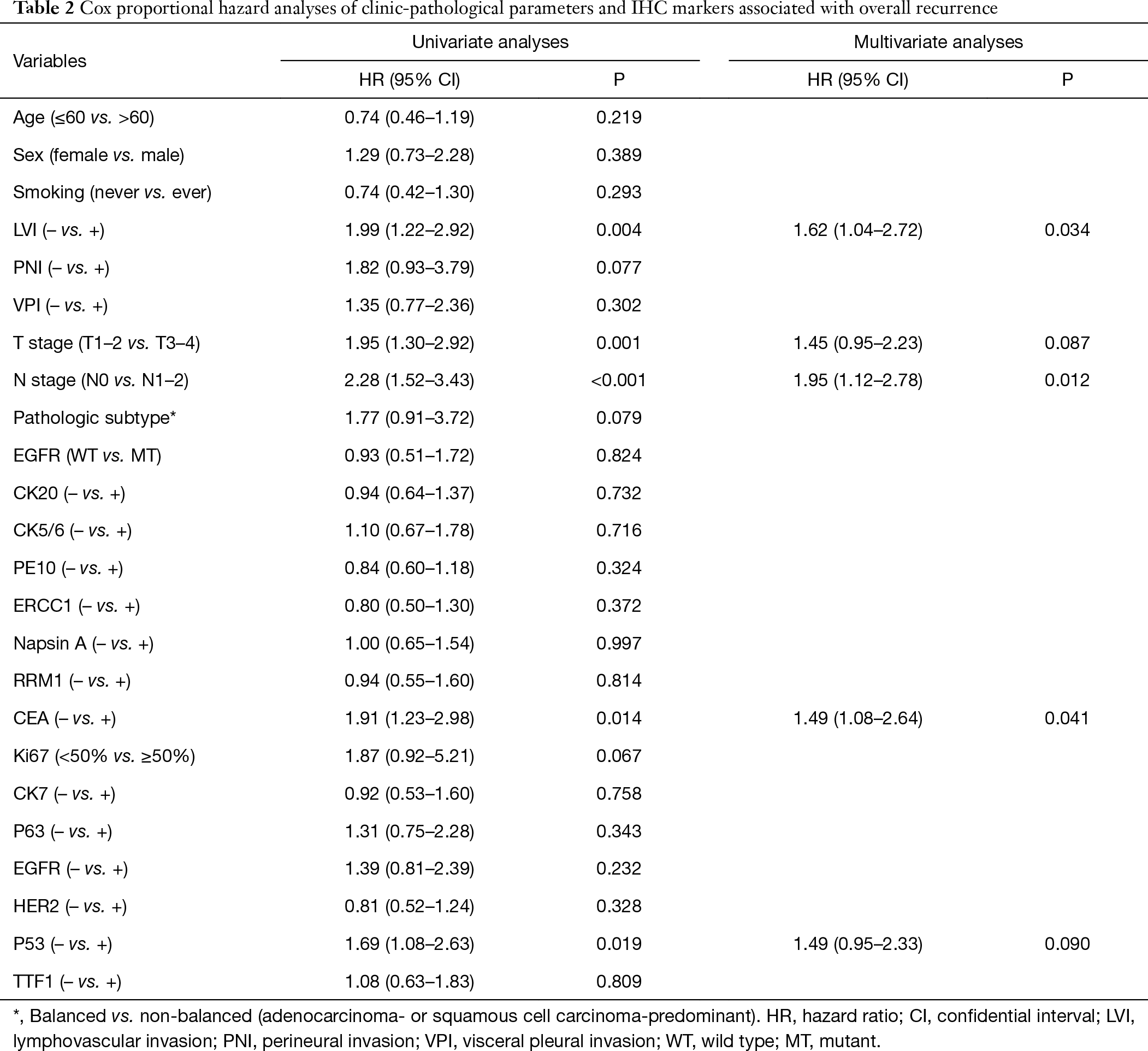 As has been mentioned above, advanced T stage (T3–4) and N stage (N+) were significantly associated with loco-regional recurrence, we set out to investigate the clinical value of adjuvant radiotherapy in patients with either T3–4 disease or N+ disease (defined collectively as pT3–4/N+). There were 95 patients with pT3–4/N+ disease in this study and the baseline disease characteristics of those received adjuvant radiotherapy (n=33) and those did not (n=62) were generally balanced (Table S1). Among these 95 patients, adjuvant radiotherapy was associated with improved DFS (16.0 vs. 34.0 months, P=0.002) (Figure 2A) and non-significantly longer overall survival (OS) (Figure 2B). 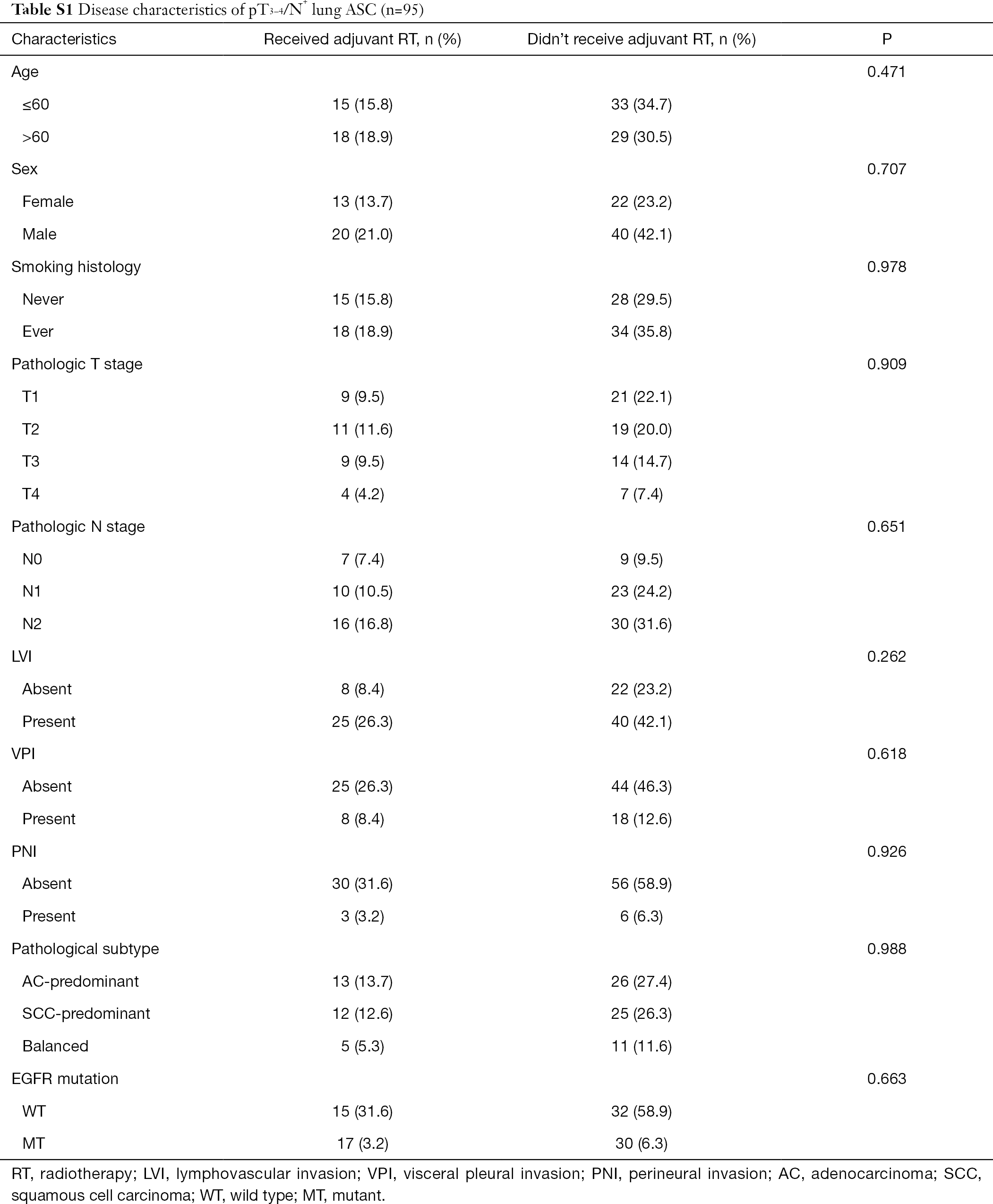 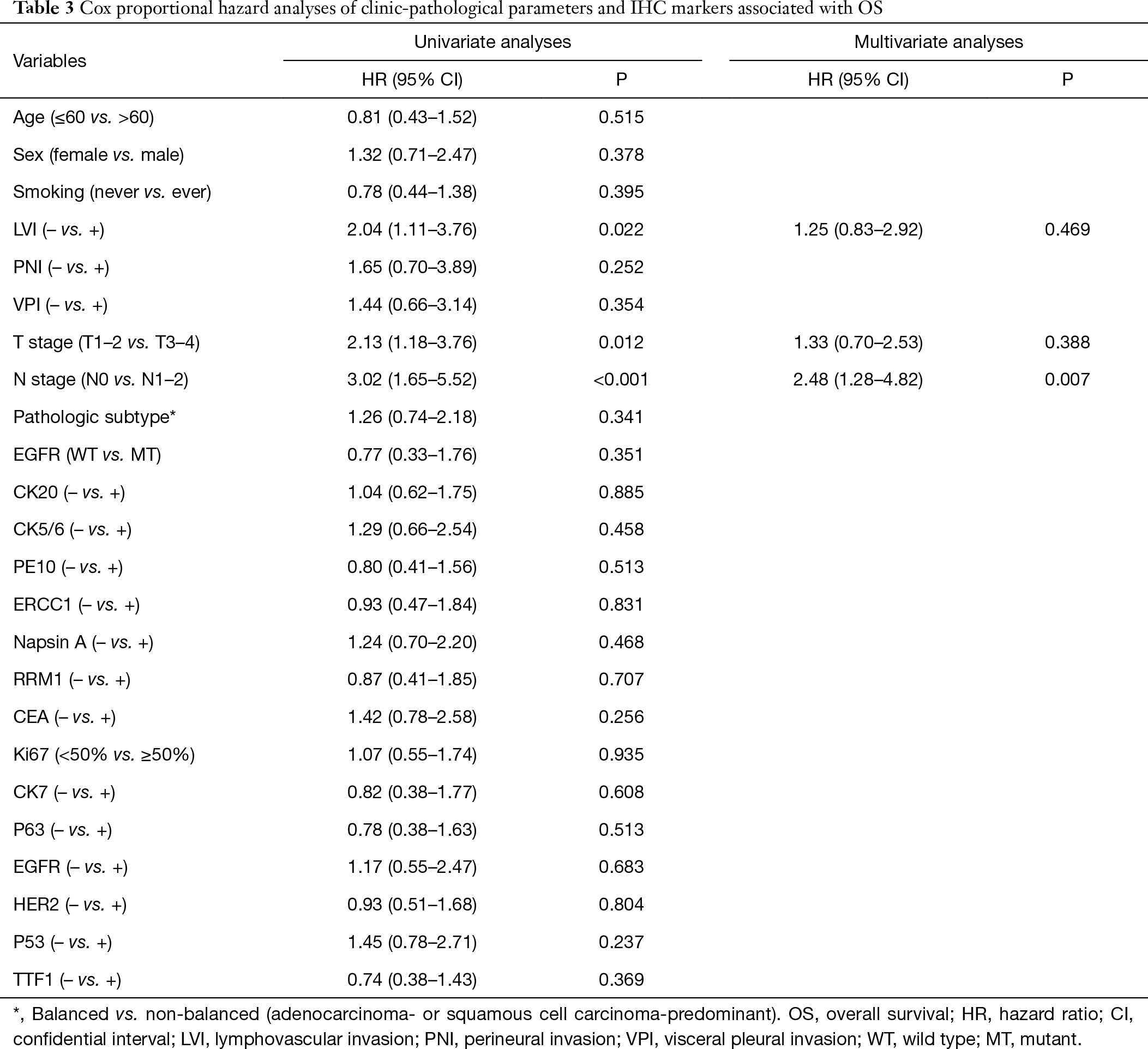 Previous investigations have identified several prognostic biomarkers in surgically resected lung ASC (2-4,6), but few studies have examined the prognostic significance of routine IHC markers and the clinical value of adjuvant radiotherapy in completely resected lung ASC. To the best of our knowledge, this is the first study incorporating common clinic-pathological parameters and a large panel of routine IHC markers to predict postoperative recurrence and identify potential candidate for adjuvant radiotherapy in lung ASC.

Recent studies have shed light on the prognostic values of routine IHC markers in lung cancer (16-19) and our study demonstrated that the expression status of CEA and p53 may serve as powerful biomarkers in lung ASC. Expression of CEA is shown to be associated with shorter survival in colorectal cancer (20) and the prognostic significance of serum CEA in NSCLC has been repeatedly demonstrated (21-23). In addition, expression of p53 is found to be prognostic in various human cancers, such as breast cancer (24), NSCLC (19), gastric cancer (25), bladder cancer (26) and cervical adenocarcinoma (27). In the current study, expression of CEA and p53, along with T stage, N stage and LVI, were found to be significantly associated with postoperative recurrence in lung ASC, which were generally consistent with previous studies. All these five clinic-pathological variables are easy to collect from routine clinical practice, which could facilitate the process of decision-making for treating physicians.

The prognostic significance of EGFR mutations in NSCLC remain controversial and it has not been specifically examined in lung ASC. In the current study, EGFR mutations were detected in 55.1% of patients, the frequency of which was comparable to previous studies conducted in Asian populations (28-30). Of note, among patients with non-squamous NSCLC and lung ASC, EGFR mutations are detected in a similar rate and EGFR tyrosine kinase inhibitors are reported to induce similar efficacy (31,32). Moreover, EGFR mutations are reported to be detected in both components of squamous cell carcinoma and adenocarcinoma from the same lung ASC patient (2). All of these support the hypothesis that the two different histological components of lung ASC originate from common precursors (2,33). Additionally, a recent meta-analysis including 19 relevant studies and a total of 4,872 surgically resected NSCLC patients found that EGFR mutations was not associated with DFS (34). Moreover, a Japanese study including 32 lung ASC patients demonstrated that EGFR mutations were not associated with recurrence-free survival or OS (35), which was reproduced by our study with a larger sample size.

Other common prognostic parameters, such as pathological subtype and sex, are reported to be prognostic in surgically resected lung ASC, which however were not reproduced in our study. Pathological subtype was repeatedly found to be an important prognostic factor among surgically resected lung ASC (3,4,14). However, the results were conflicting, as patients with balanced subtype were demonstrated to have superior prognosis in two of the studies (4,14), but were revealed to have worse survival than those with squamous cell carcinoma-predominant subtype in another study (3). In the current study, there was a trend toward better prognosis of balanced subtype compared with the other two pathological subtypes, however the different did not reach statistical significance (P=0.079). Larger prospective studies including patients treated with modern surgical techniques and cutting-edge biological therapies (such as targeted therapy and immune checkpoint inhibitors) are needed to further examined the prognostic role of pathological subtypes. Similarly, sex was found to be prognostic in surgically resected lung ASC (3), but was not reproduced by other studies (4,6,14) as well as our study. As a retrospective study, we could not gather the information on the mutation status of several other common driver mutations in NSCLC, such as ALK, ROS1, KRAS and RET. The prognostic significance of these molecular aberrations remain unknown in surgically resected lung ASC.

Our study also has some limitations. Due to the nature of retrospective study, the clinical values of adjuvant radiotherapy need to be interpreted with caution, as certain selection bias may exist. Second, postoperative follow-ups were generally at the discretion of the treating physicians and patients with asymptomatic recurrence may be underestimated, especially for those with brain and/or bone metastases, as brain MRI and bone scanning were not mandatory.

We thank Edanz Editing China (www.liwenbianji.cn/ac) for editing the English text of a draft of this manuscript.

Funding: This work was supported by the National Natural Science Foundation of China (No. 81802904 to LL) and the Fund of Fudan University Shanghai Cancer Center (No. YJ201713 to LL).

Reporting Checklist: The authors have completed the STROBE reporting checklist. Available at http://dx.doi.org/10.21037/jtd-20-1979

Conflicts of Interest: All authors have completed the ICMJE uniform disclosure form (available at http://dx.doi.org/10.21037/jtd-20-1979). The authors have no conflicts of interest to declare.

Ethical Statement: The authors are accountable for all aspects of the work in ensuring that questions related to the accuracy or integrity of any part of the work are appropriately investigated and resolved. Our study followed The Declaration of Helsinki (as revised in 2013). The institutional review board of Fudan University Shanghai Cancer Center approved the study (approval number 090977-1). Informed consent was waived by the institutional review board because this was a retrospective study.