Similar to enhanced recovery pathways seen in other surgical specialties (1,2). Fast-track pathways have been utilized in thoracic surgery to speed up recovery and reduce postoperative stay (3-7). Chest tube management following thoracic surgical procedures plays a pivotal role in this process. Many patients are able to be discharged the same day as postoperative chest tube removal, while others require an extended length of stay (ELOS).

This was a retrospective study using the Society of Thoracic Surgeons General Thoracic Surgery Database at the University of Alabama at Birmingham, a tertiary referral medical center, all adult patients who underwent a general thoracic surgery procedure between August 1, 2013 and April 1, 2017 were identified. Cases that involved intraoperative placement of a chest tube were deemed eligible and included. Esophagectomies were excluded. A total of 1,470 patients were included and followed up until their discharge. Informed consents are covered by general preoperative consent forms.

Descriptive statistics were conducted, and continuous variables were expressed as median and interquartile range. Dichotomous variables/ordinal variables were expressed as number and proportion. Continuous variables were compared using t-test; dichotomous variables were compared using the chi-square test. To eliminate any rule of confounding factors or bias, univariate and then multivariable linear regression analysis were conducted to identify predictors associated with LOS after chest tube removal. Since we are comparing two cohorts in order to determine how their characteristics differed, we did not conduct any subgroup analysis or sensitivity analysis. SAS 9.4 was used for statistical analysis.

Of the 1,470 patients who were eligible and included in the study, 51% of patients were male, 81% were white, and the mean age was 59 years (SD: 15 years). All patients were followed up to discharge. Of the total cohort, 338 (23.0%) patients had ELOS following chest tube removal with a median additional stay after chest tube removal of 3 days (interquartile range, 2–7 days) (Table 1). Surgical procedures were distributed between anatomic lung resection (34%), wedge resection (29%), decortication (16%), and 21% had another general thoracic surgical procedure (Table 2). By univariate analysis, ELOS patients were younger than non-ELOS patients, with a mean age difference of 2.6 years between the two groups. Black patients were more likely to have ELOS compared to white patients [79/263 (30%) vs. 255/1,187 (21%); P=0.0027 (Table 3)]. 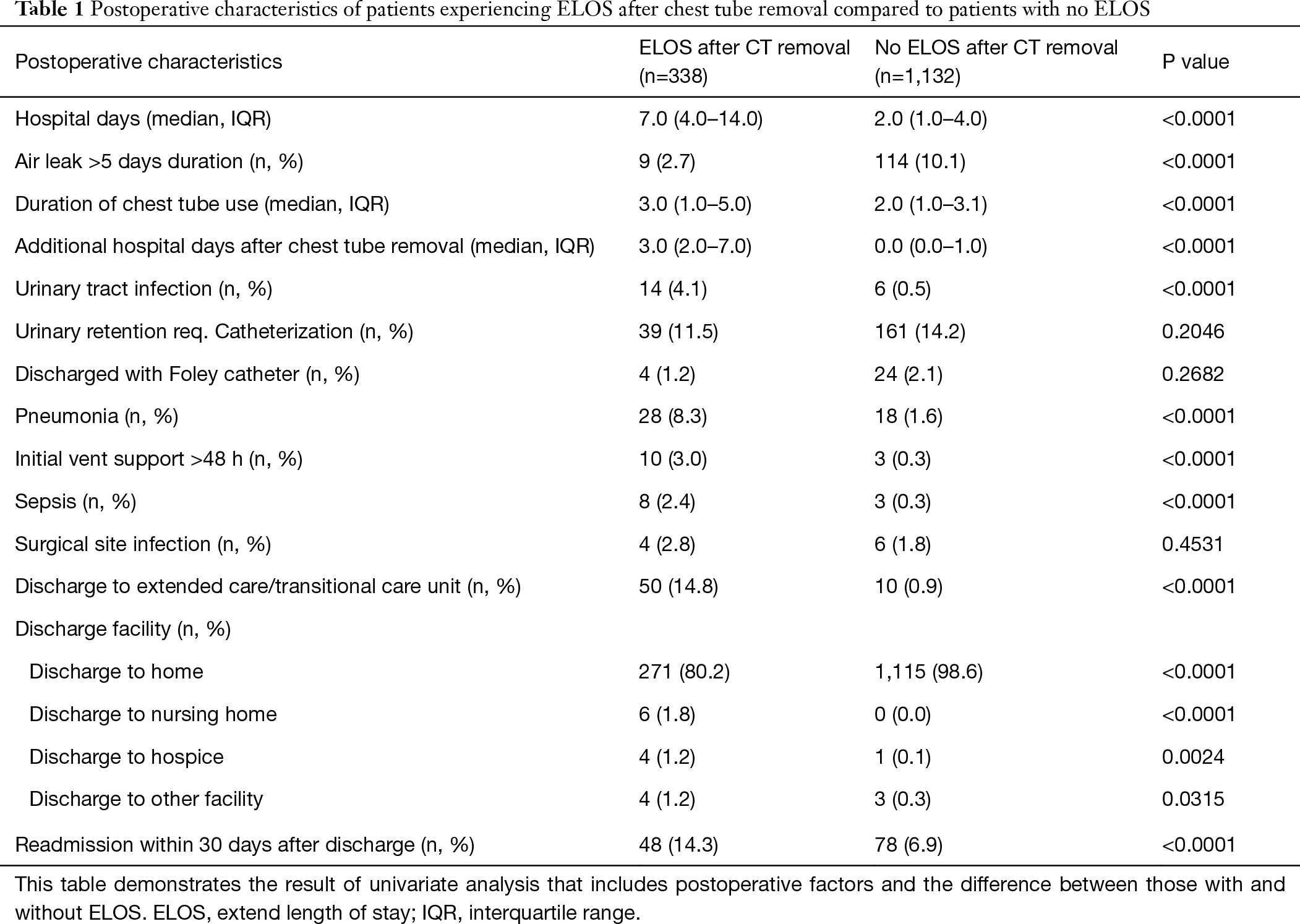 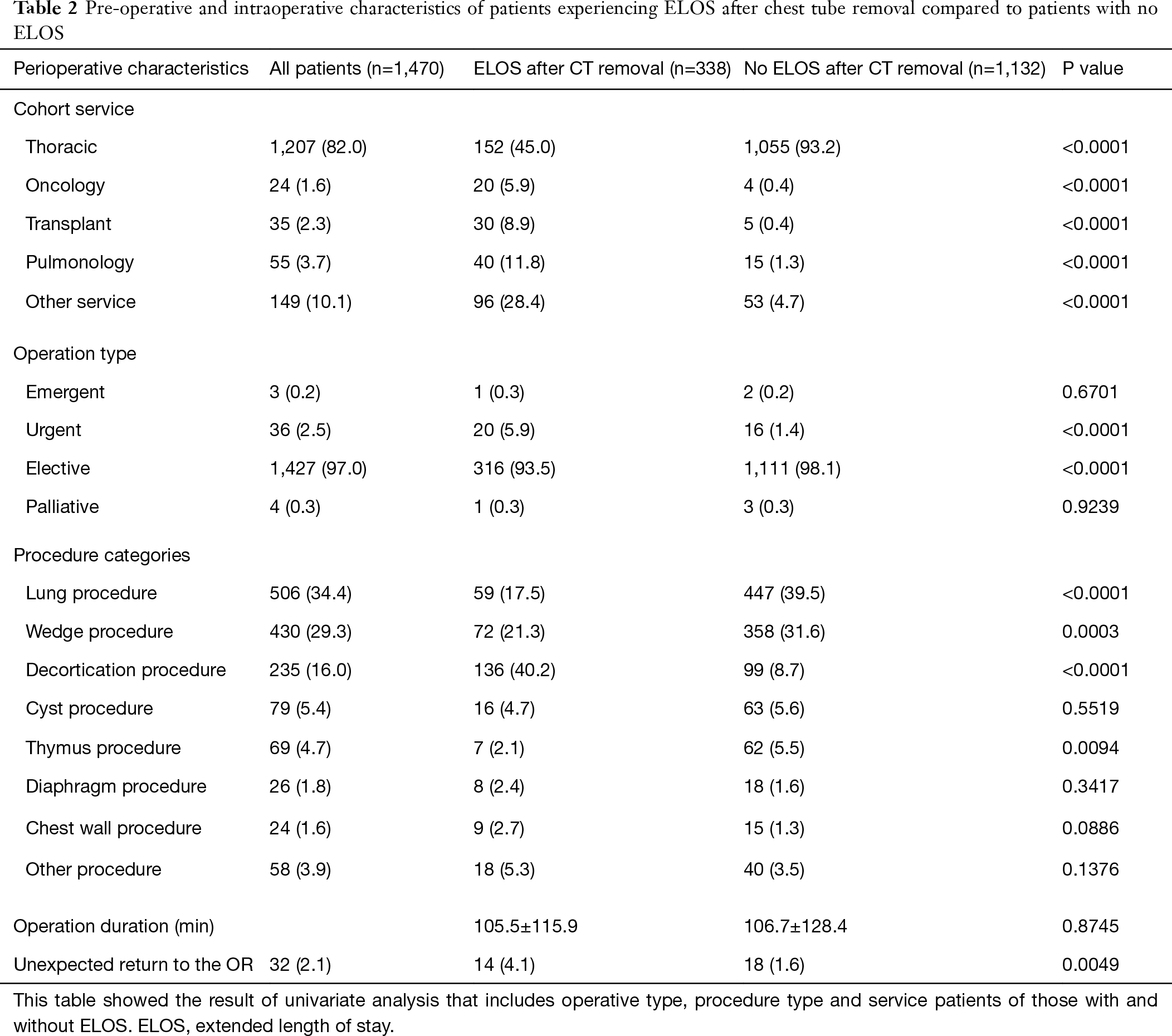 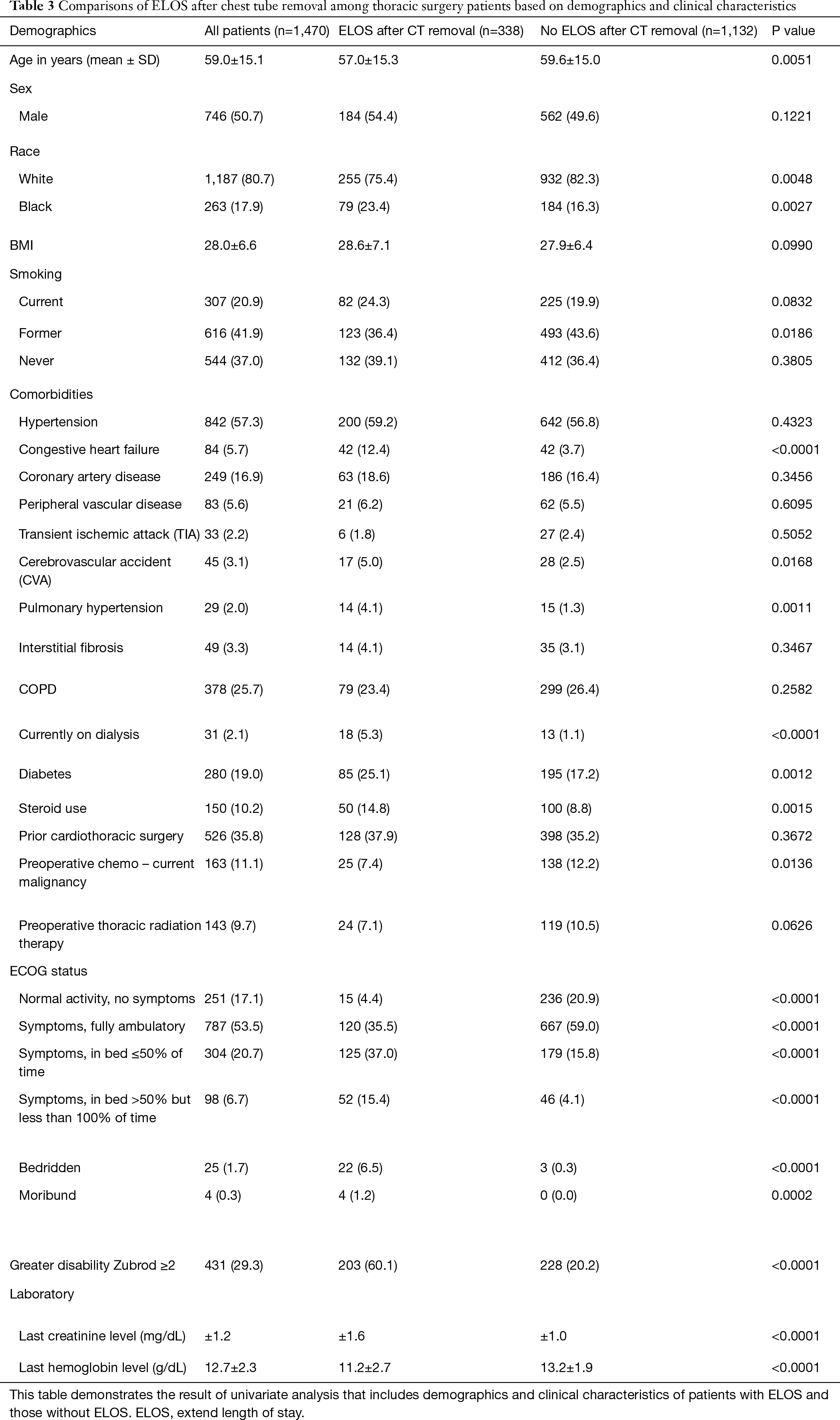 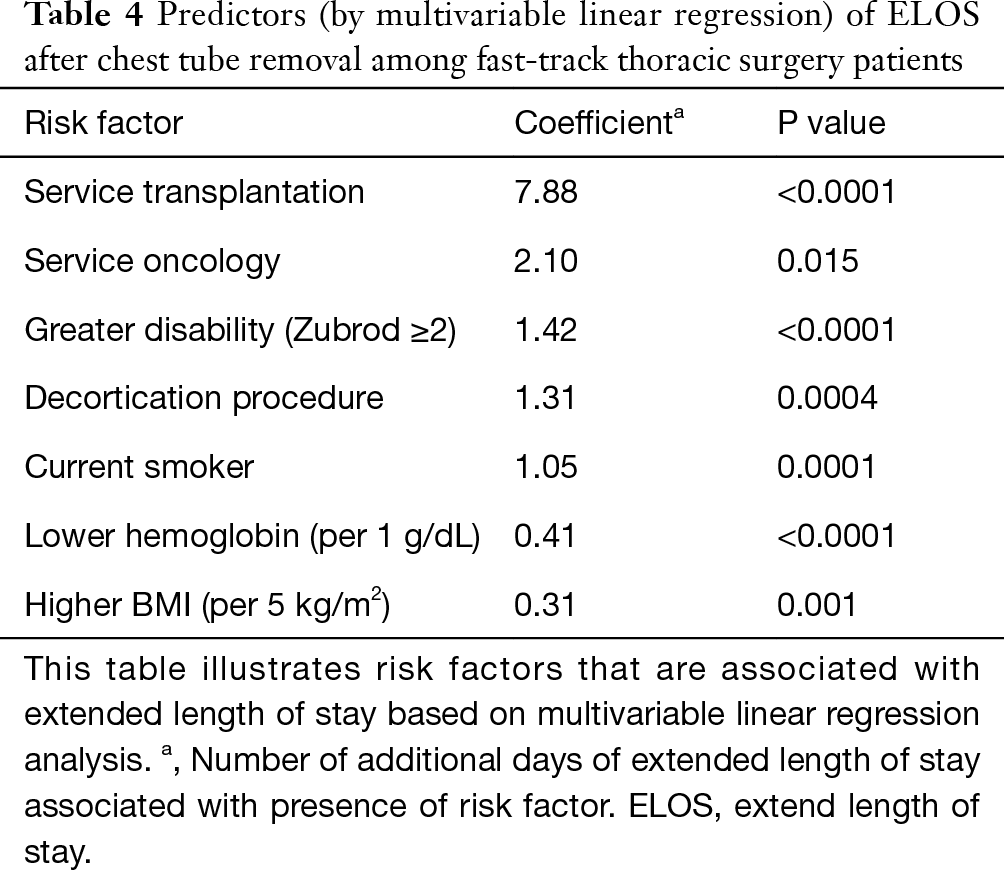 The results of this study show that the service into which a patient is admitted may serve as a predictor for ELOS. In our institution, patients admitted to transplant, pulmonary, and oncology services were more likely to experience ELOS after chest tube removal than patients admitted to general thoracic surgery services. In addition, certain patient characteristics such as obesity, severe disability, or active smoking were associated with increased length of stay following chest tube removal and should be considered when determining postoperative pathways to discharge. Our finding that decortication procedures were associated with ELOS indicates that the type of thoracic surgery procedure should also be considered when constructing fast-track pathways.

Our study adds to current literature surrounding postoperative chest tube management by exploring what factors affect the timeline of a patient’s discharge following chest tube removal. We were unsurprised to find that non-thoracic surgical services had higher rates of ELOS, as chest tube management is protocolized and familiar to our thoracic surgery team. Discharge planning often centers on the date of anticipated removal of the chest tube, a parameter that is best understood by the surgical team. Similarly, the comorbidities that correlated with higher ELOS—current smoking, obesity, severe disability—were also unsurprising as these conditions have been shown to lead to longer lengths of stay and increased complications for patients undergoing thoracic procedures (18-22).

Finding differences in ELOS among procedure type was interesting as it suggests there may be utility in creating fast-track pathways that are procedure-specific and not broadly applied to all general thoracic surgical procedures. The increased length of stay for decortication procedures may be explained by the pathology of disease, as decortication procedures may be undertaken after long bouts of illness or chronic disease as opposed to wedge resections or other anatomic lung resections which may be done on an elective basis. Some patients require prolonged administration of intravenous antibiotics following decortication for empyema, which requires additional planning and could partially explain ELOS in this population.

The main limitation of this study is that it was performed at a single institution and thus may be subject to institution-specific biases. For example, the difference seen in ELOS between the thoracic service and other services may not be seen at other institutions depending on their chest tube protocol and education practices. However, our cohort is a representative sample and therefore, we believe that the findings of this study would be applicable to other institutions.

We found that there are certain risk factors that are associated with the ELOS following chest tube removal. These include obesity, severe disability, active smoking, admission to non-thoracic surgical services, and undergoing decortication procedures. These factors should be considered when establishing fast-track algorithms, as pathways may need to be adjusted to accommodate for patients possessing these risk factors. Utilizing expedited pathways to minimize ELOS following chest tube removal could help optimize resource utilization in the care of general thoracic surgical patients.

This paper was presented as a poster presentation at the 32nd Annual Meeting of the General Thoracic Surgical Club, March 7-10, 2019, Naples, FL.

Reporting Checklist: The authors have completed the STROBE reporting checklist. Available at http://dx.doi.org/10.21037/jtd-20-1210

Conflicts of Interest: All authors have completed the ICMJE uniform disclosure form (available at http://dx.doi.org/10.21037/jtd-20-1210). JKK reports other from Society of Thoracic Surgeons, outside the submitted work; BW serves as an unpaid editorial board member of Journal of Thoracic Disease from Oct 2018 to Sep 2020. The other authors have no conflicts of interest to declare.

Ethical Statement: The authors are accountable for all aspects of the work in ensuring that questions related to the accuracy or integrity of any part of the work are appropriately investigated and resolved. The study was conducted in accordance with the Declaration of Helsinki (as revised in 2013). IRB approval (protocol #170516005) was obtained for the performance of this study. Informed consents are covered by general preoperative consent forms.