Lung cancer is one of the most common malignant diseases worldwide and a major cause of cancer-related death (1,2). Around 85% of all lung cancers are non-small cell lung cancers (NSCLCs), among which adenocarcinoma and squamous cell carcinoma (SCC) are the most common types (3,4). During the past decade, the development of new technologies such as next-generation sequencing (NGS) has enhanced our understanding of how the genetic characteristics of NSCLC influence its pathogenesis and drug-resistance (5). The use of modern molecular biology tools to study the genetic changes underlying NSCLC has allowed us to embark on an era of precision medicine, and as a result the one-size-fits-all therapeutic model has been abandoned. It is now known that mutations in the gene encoding the epidermal growth factor receptor (EGFR) promote tumor proliferation and metastasis, and the use of EGFR-tyrosine kinase inhibitors (EGFR-TKIs) as a targeted therapy has markedly improved the management of patients with NSCLC (5-7).

In general EGFR-TKIs are more effective for NSCLC with activating mutations of EGFR than for NSCLC with wild-type EGFR (8). Among the known EGFR gene mutations, L858R and exon 19 deletion (EGFR 19del) account for the majority (85–90%) of mutations in the EGFR kinase domain that respond well to EGFR-TKIs (9). However, not all EGFR mutations are sensitive to EGFR-TKIs. The insertion of three or more nucleotides into exon 20 of EGFR (EGFR ex20ins) is a known driver for NSCLC. Most EGFR ex20ins mutations are resistant to the currently available EGFR-TKIs and associated with a poor prognosis (10,11). For example, it has been reported that the response rates of patients with EGFR ex20ins to first-generation (erlotinib and gefitinib) and second-generation (afatinib) EGFR-TKIs are low, ranging from 0–8.7% (12,13). Although new drugs targeting NSCLC with EGFR ex20ins mutations, such as poziotinib, TAK-788 and TAS6417, have been developed, these agents are still being evaluated in clinical trials (14-16). Thus, effective treatment options for EGFR ex20ins mutations are limited.

The aim of this study was to investigate whether EGFR amplification affects the progression-free survival (PFS) and overall survival (OS) of patients with EGFR ex20ins mutations treated with an EGFR-TKI and/or other chemotherapeutic agent. We present the following article in accordance with the STROBE reporting checklist (available at http://dx.doi.org/10.21037/jtd-20-1630).

This is an observational longitudinal cohort study. This prospective case series included consecutive treatment-naïve adult patients with advanced NSCLC who were seen at Guangdong Provincial People’s Hospital between November 2017 and February 2019. The participants were enrolled from a prospectively managed database that also collected information regarding the patients’ clinical characteristics, NGS data, treatment and clinical outcomes. The inclusion criteria were: (I) age ≥18 years; (II) diagnosis of advanced NSCLC; (III) no previous treatment for NSCLC; and (IV) EGFR ex20ins mutation subsequently confirmed by NGS of peripheral blood and/or tissue specimens. Patients with incomplete or missing data were excluded from the final analysis. The study investigators played no role in the design or implementation of the treatment protocols. The study was conducted in accordance with the Declaration of Helsinki (as revised in 2013). The study was approved by the Ethics and Scientific Committees of Guangdong Provincial People’s Hospital (GDREC2016175H) and informed consent was taken from all the patients.

NGS was performed by Burning Rock Biotech (Guangzhou, China), which is a Clinical Laboratory Improvement Amendments-certified testing center. The samples for NGS included plasma and tumor tissue. For the extraction of cell-free DNA (cfDNA) from plasma, 10 mL of whole blood was collected in K3EDTA-containing tubes (Cell-Free DNA BCT; Streck, La Vista, NE, USA) and centrifuged at 2,000 g for 10 min at 4 °C within 72 h of collection. The supernatant was transferred to a 15-mL centrifuge tube and centrifuged at 16,000 g for 10 min at 4 °C, and the supernatant was transferred to a new tube for storage at −80 °C until further use. Circulating cfDNA was extracted using the QIAamp Circulating Nucleic Acid kit (Qiagen, Hilden, Germany) and quantified using the dsDNA HS Assay Kit and Qubit 2.0 Fluorometer (Life Technologies, Carlsbad, CA, USA). For plasma genotyping, NGS of peripheral white blood cells was also performed to avoid false positive plasma genotyping due to clonal hematopoiesis. The extraction of DNA from tissue samples was achieved using the QIAamp DNA FFPE Tissue Kit (Qiagen) in accordance with the manufacturer’s instructions. The DNA concentration was determined using the Qubit dsDNA Assay (Life Technologies).

Gene copy number variation (CNV) was evaluated with in-house scripts of tumor tissues. Coverage data were corrected for sequencing bias arising from GC content and probe design. The coverage of the various samples was normalized to comparable scales using the average coverage of all captured regions. Gene copy number (CN) at each capture interval was calculated from the ratio of the coverage depth in detected circulating tumor DNA to the average coverage of ≥50 reference samples without CNV. CNV was determined using two criteria: (I) coverage of >60% capture intervals of the genes differed significantly from reference samples (P<0.005 for hotspot genes and P<0.001 for other genes, z-test comparing the coverage of each capture interval to the mean coverage of the interval in all control samples); (II) CN attained the minimal threshold for gain (>2.25 for hotspot genes and >2.5 for others) or loss (<1.75 for hotspot genes and <1.5 for others). CNV distribution plots were utilized to differentiate amplifications from polysomies. EGFR amplification was defined as >2.75 in the 520 panel and >2.25 in the other panels (19).

The following clinical data were extracted from the database: sex, age, smoking history, tumor pathological type, treatment history and the date of occurrence of tumor progression or death.

The data were analyzed using SPSS 22.0 (IBM Corp., Armonk, NY, USA) and Prism 7.0 (GraphPad, San Diego, CA, USA). Quantitative data are expressed as median (range) and were compared between groups using the Mann-Whitney U test. Count data are expressed as n (%) and were compared between groups using Fisher’s exact test. Survival was analyzed using the Kaplan-Meier method and log-rank test. All statistical tests were two-sided, and P<0.05 was considered statistically significant.

Clinical characteristics of the study participants 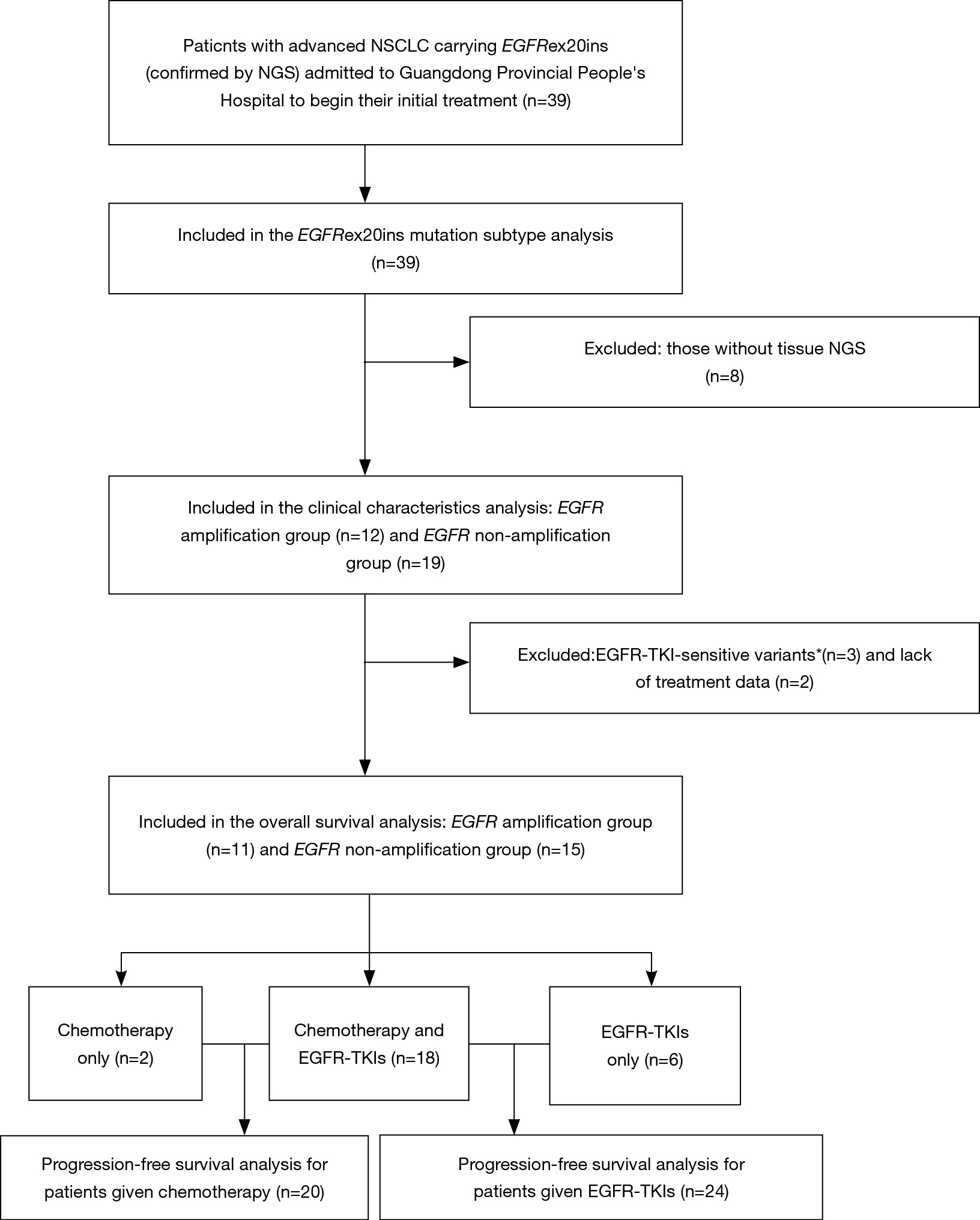 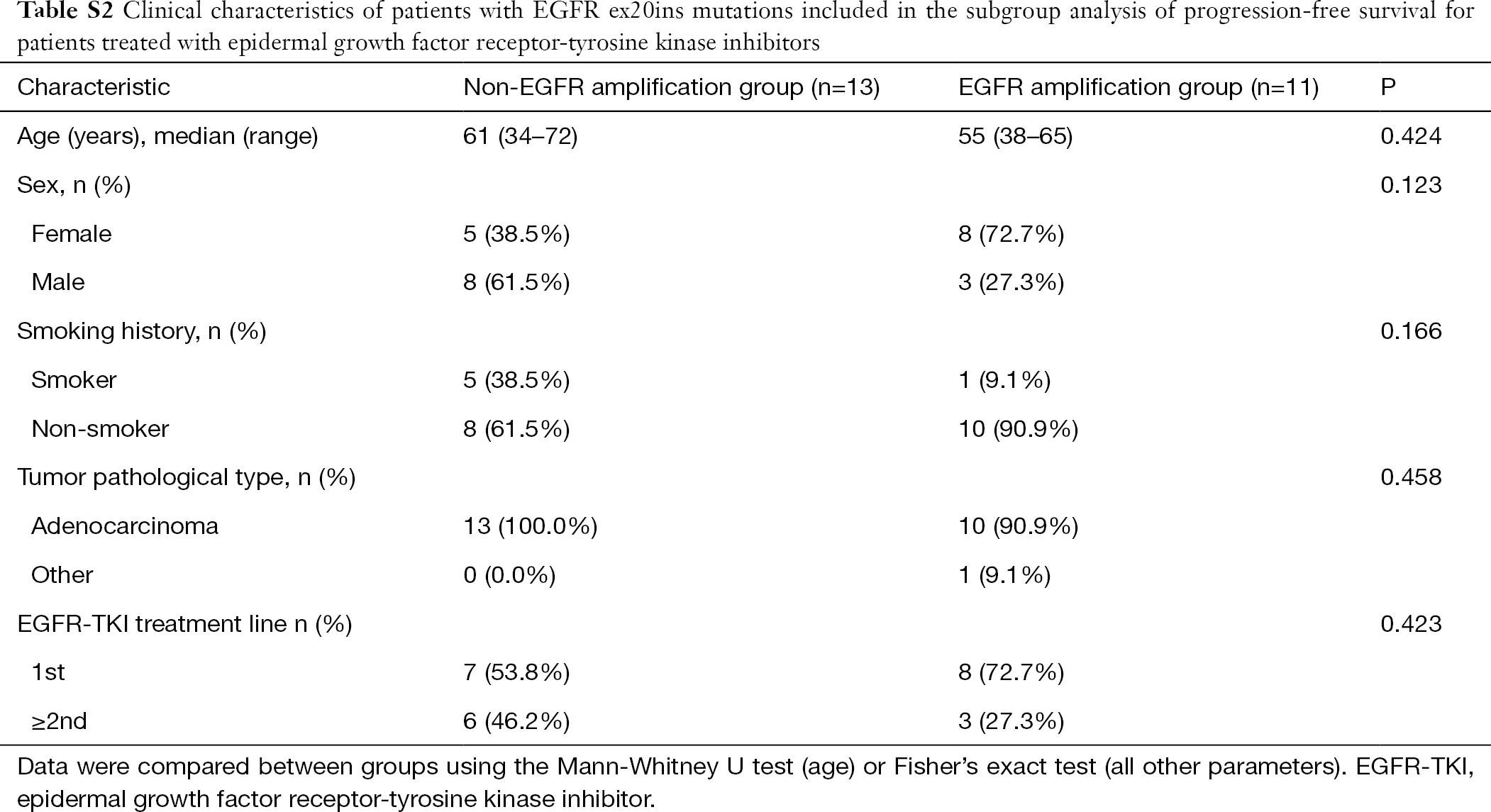 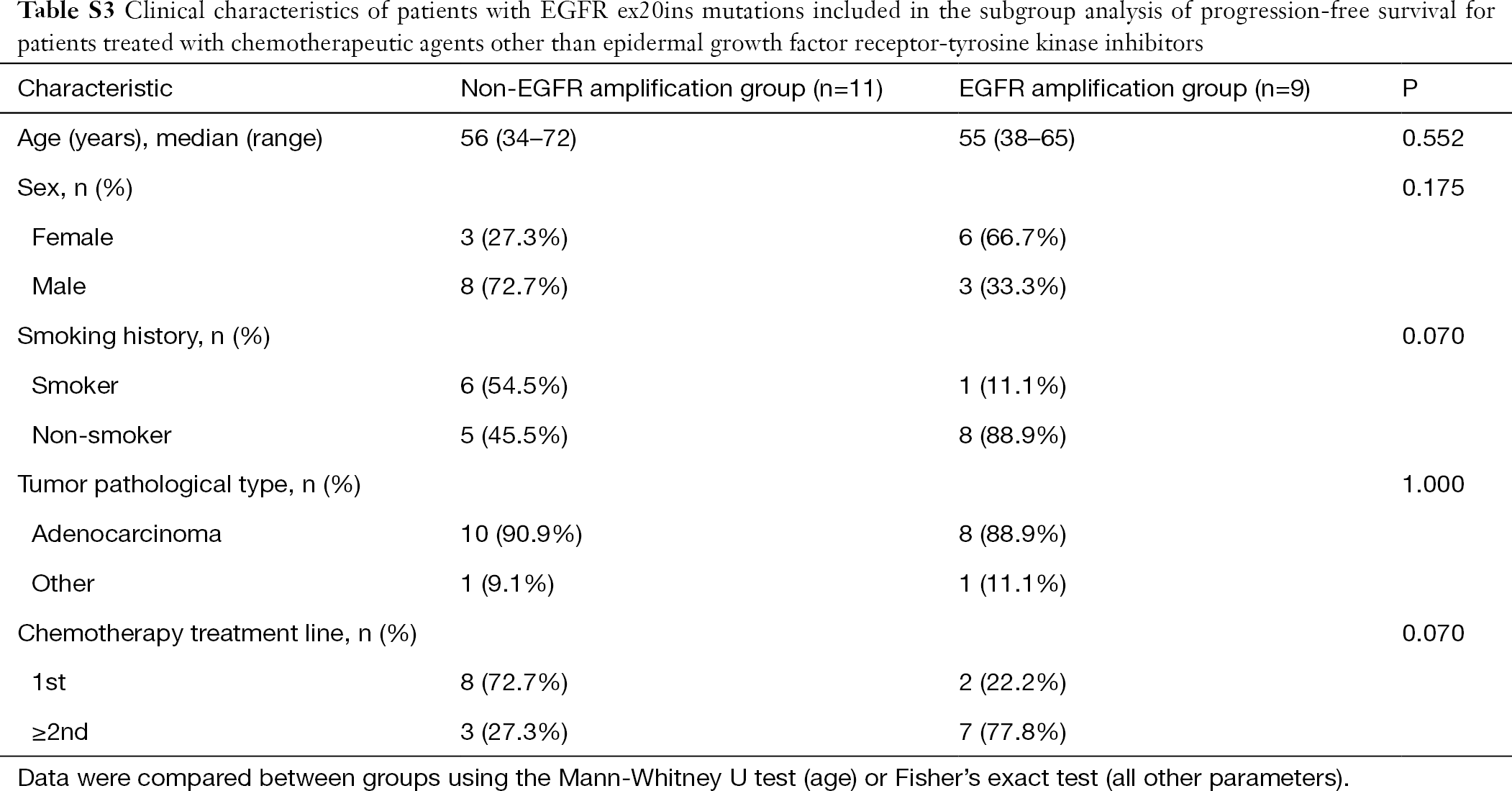 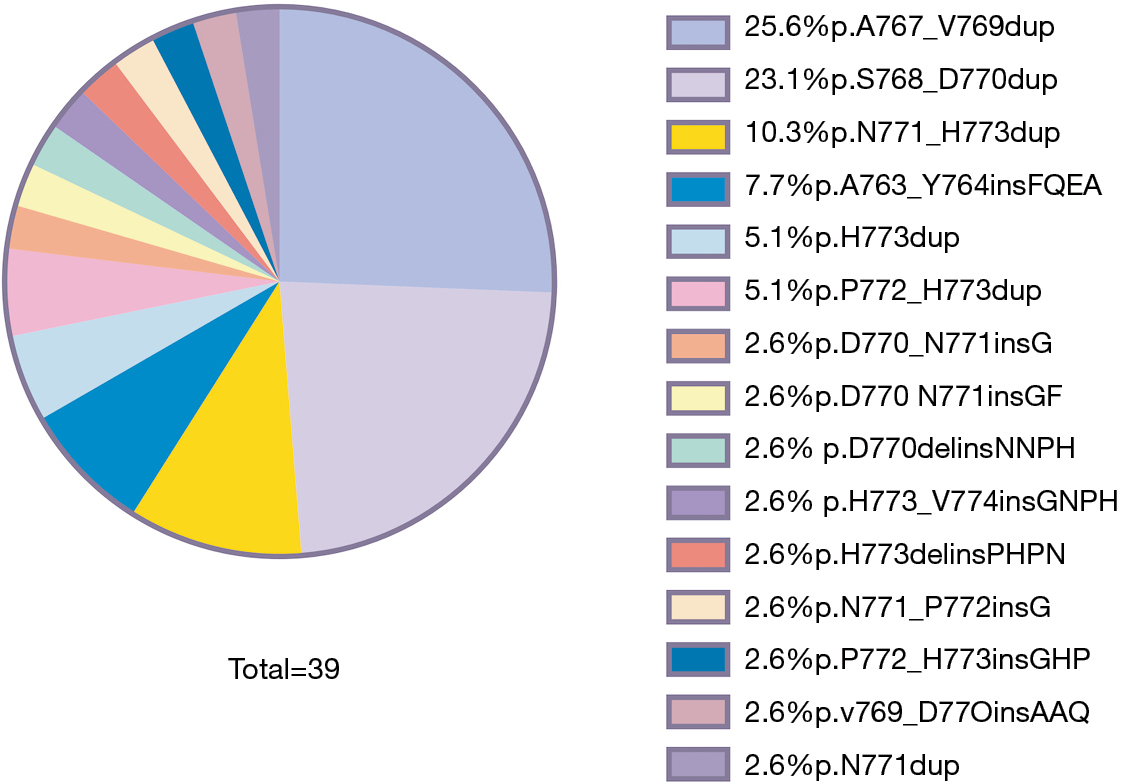 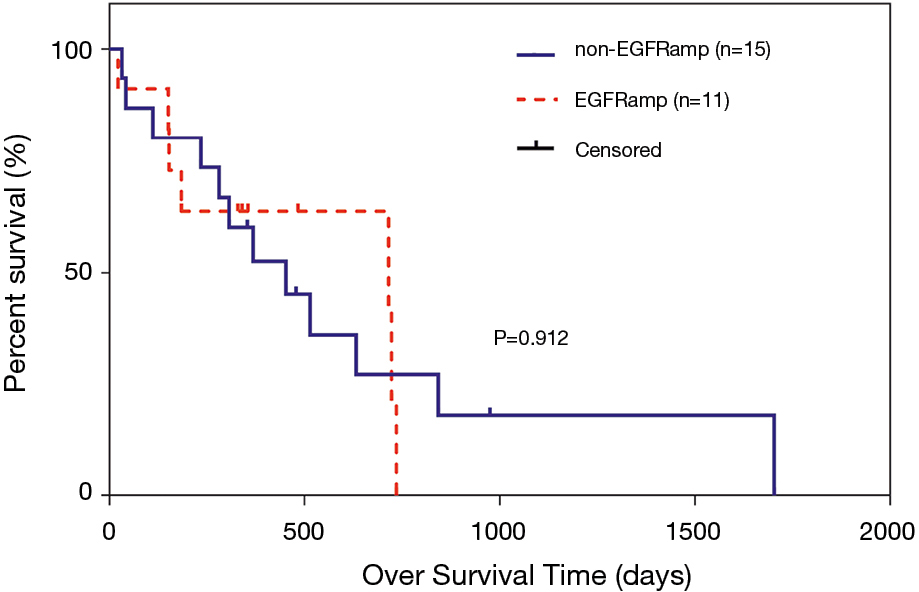 Figure 3 Overall survival of 26 patients with EGFR ex20ins mutations with or without EGFR amplification. 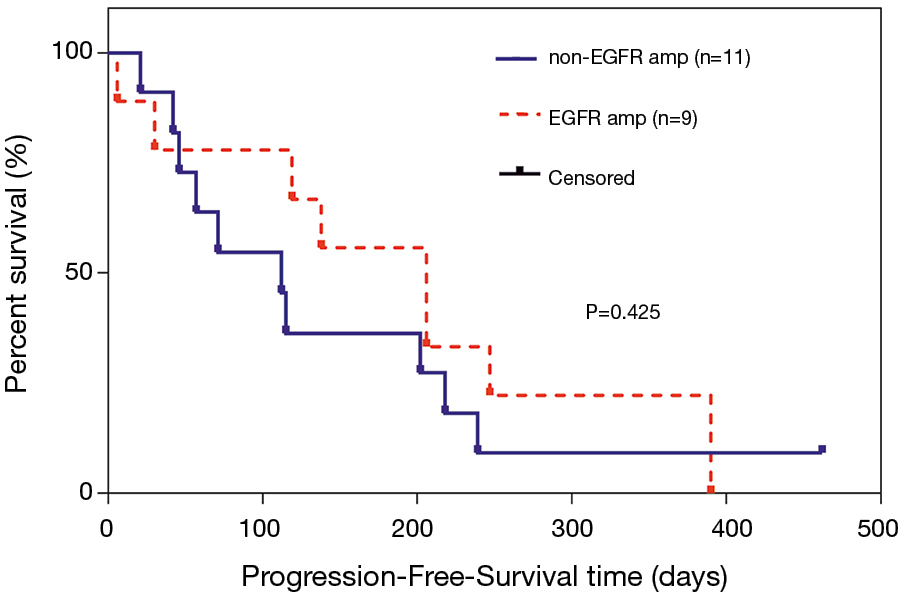 Figure 4 Progression-free survival of 20 patients with EGFR ex20ins mutations with or without EGFR amplification who were treated using chemotherapeutic agents. 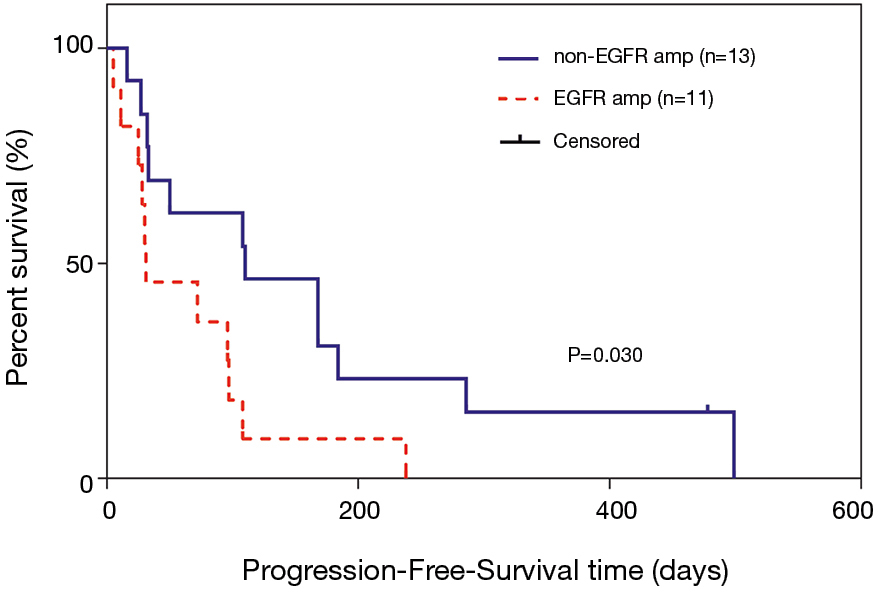 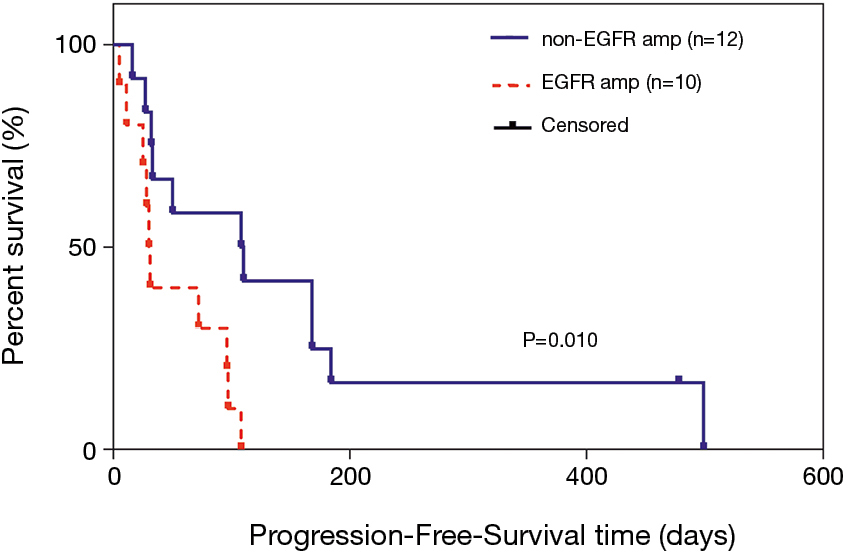 Figure 6 Progression-free survival of 22 patients with EGFR ex20ins mutations with or without EGFR amplification who were treated using epidermal growth factor receptor-tyrosine kinase inhibitors. Patients with the EGFR p.A763_Y764insFQEA mutation were excluded from the analysis. 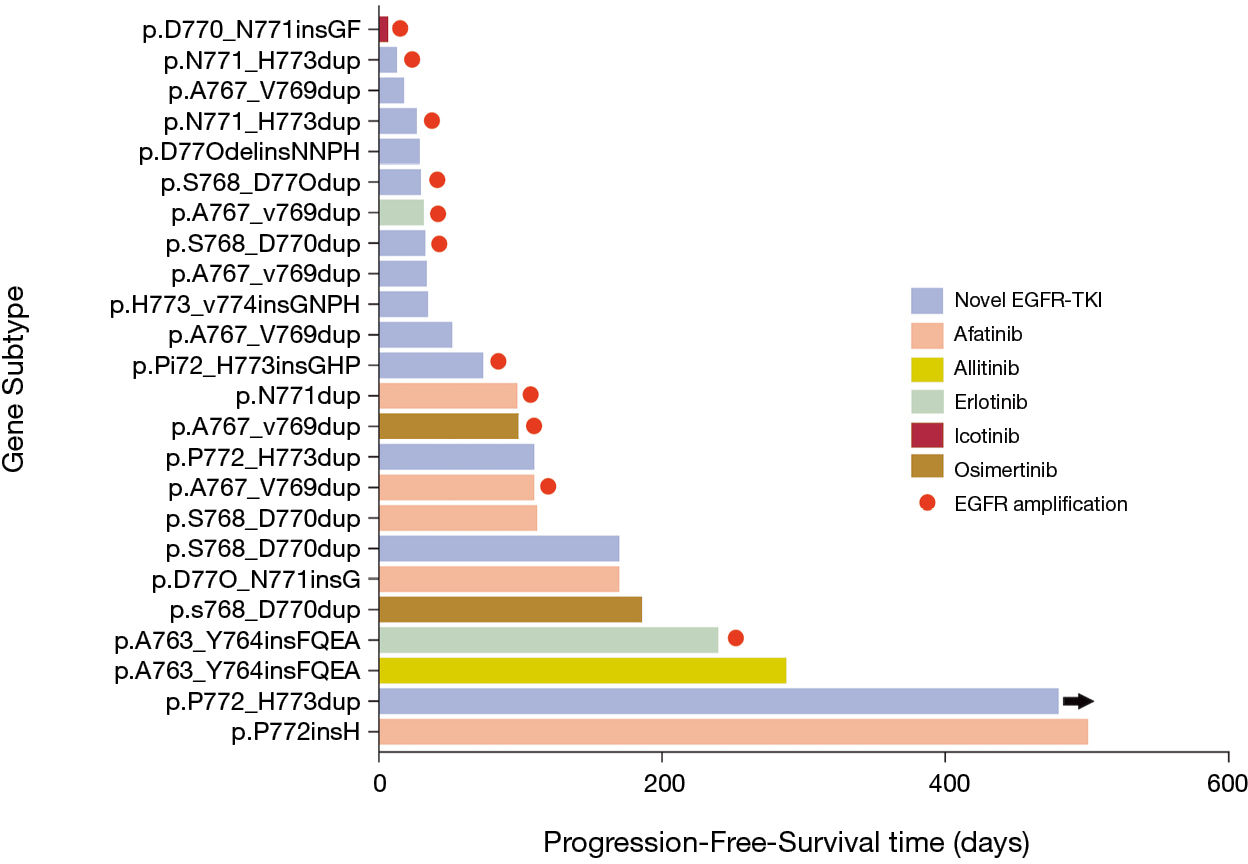 There are still many limitations in our study. First, the EGFR-TKI treatment regimens varied between patients. The overall efficacy of EGFR-TKIs were limited, and there were obvious differences in sensitivity between individuals. Second, this was a single-center study with a small sample size. Thus, our conclusion was just a suggestive and trending one and larger sample size studies are needed. Patient recruitment is ongoing to validate our preliminary findings.

The authors thank the patients, their families and the study personnel who participated in this trial.

Funding: This work was supported by the National Key R&D Program of China (No. 2016YFC1303800 to Q Zhou), the National Natural Science Foundation of China (No. 81871891 to Q Zhou), the High-level Hospital Construction Project (No. DFJH201810 to Q Zhou) and Key Lab System Project of Guangdong Science and Technology Department-Guangdong Provincial Key Lab of Translational Medicine in Lung Cancer (Grant No. 2017B030314120, to YL WU).

Reporting Checklist: The authors have completed the STROBE reporting checklist. Available at http://dx.doi.org/10.21037/jtd-20-1630

Ethical Statement: The authors are accountable for all aspects of the work in ensuring that questions related to the accuracy or integrity of any part of the work are appropriately investigated and resolved. The study was conducted in accordance with the Declaration of Helsinki (as revised in 2013). This study was approved by the Ethics and Scientific Committees of Guangdong Provincial People’s Hospital (GDREC2016175H) and informed consent was taken from all the patients.