Lung cancer remains the one with the highest cancer-related mortality in the world (1). In recent years, the rapid advancement and wide application of low-dose computed tomography (CT) have made it possible to find more cases of lung cancer (2). Multiple primary lung cancer (MPLC), which was defined in 1975 by Martini and Melamed (3), also showed an increased incidence as the development of screening methods. Patients diagnosed with first primary lung cancer (FPLC) might be of a high risk for developing a second primary lung cancer (SPLC) (4). One previous study reported 2.95% of 156,494 lung cancer patients suffered a SPLC in the study population from the Surveillance, Epidemiology, and End Results (SEER) database between 1992 and 2007 (5). In spite of the fact that an inspiring survival outcome has been obtained for early-stage lung cancer (6), the clinical management and prognosis of SPLC patients still remain unclear. Considering the worse survival of SPLC patients, it is particularly necessary to conduct prognostic studies for selecting potential survival indicators and identifying optimal treatment strategies.

Currently, surgical resection predominates in the curable medical interventions for early-stage lung cancer. Radiotherapy, which has gone through high-quality improvements in the past decades, can be an effective alternative to surgery. Stereotactic ablative radiotherapy (SABR) has been considered the standard treatment for inoperable early-stage lung cancer patients, especially the elderly (7). Several studies also showed a similar survival outcome between surgical resection and SABR (8,9). However, little is known about the effect of radiotherapy on the survival of SPLC patients.

The SEER database collected the cancer data of incidence and survival that covered approximately 30% of the American cancer patients. Specifically, the dataset of multiple primary cancer in this database is available, which defines MPLC based on the followings: (I) topography; (II) histology; (III) solitary tumors that located at each lung; (IV) time interval between the diagnosis of two tumors more than 3 years; or (V) more than 60 days between the first in situ carcinoma and the second invasive carcinoma (10,11). Actually, in spite of the commonly-accepted Martini criteria (3), it is still difficult to distinguish MPLC from pulmonary metastasis. Thus, in the present study, we identified SPLC patients that previously received radiotherapy for FPLC from the SEER database and compared the survival outcome between radiotherapy and other treatments for SPLC. The prognostic factors were also determined by analyzing the clinical and therapeutic characteristics associated with SPLC patients. We present the following article in accordance with the STROBE reporting checklist (available at http://dx.doi.org/10.21037/jtd-20-2024).

The study was conducted in accordance with the Declaration of Helsinki (as revised in 2013). Patients diagnosed with SPLC between 2004 and 2016 were identified from SEER database. The initial search strategy was set as: (I) number of tumors: two (person selection session); (II) tumor site: “lung and bronchus” (site recode ICD-O-3/WHO 2008); (III) sequence number for tumors (multiple primary fields): 1st and 2nd of two or more primaries; and (IV) diagnosis year of first primary tumor: 2004–2016. By further selection, we only enrolled clinical T1 stage FPLC (tumor size ≤3 cm) patients who received radiotherapy (radiation recode: beam radiation) without undergoing surgical resection for FPLC (Figure 1). Since the SEER database was used publicly, all data included are anonymous and the relevant requirement about informed consent was thus waived. This study has been approved to be exempted research for no human subject involved by the Ethics Committee of Peking Union Medical College Hospital. 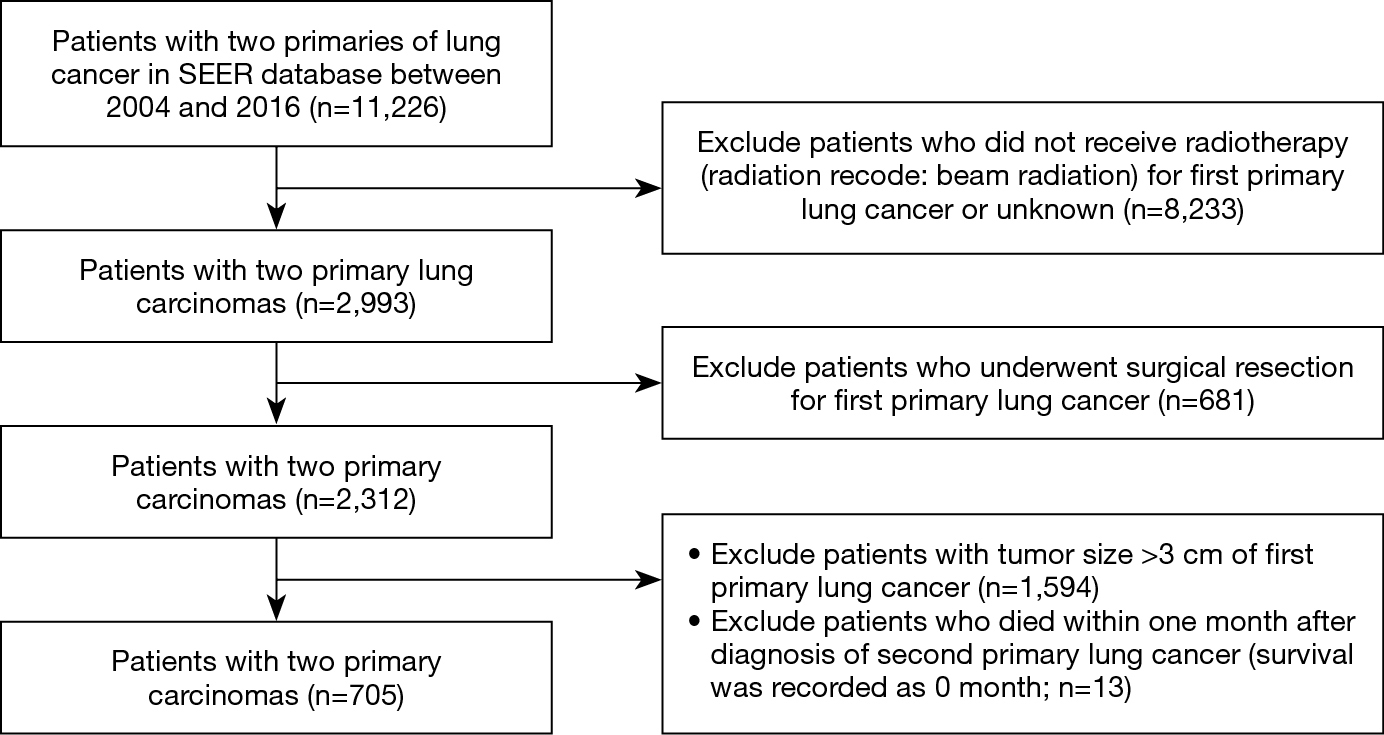 Figure 1 The selection flowchart of the study cohort from the SEER database. SEER, Surveillance, Epidemiology, and End Results.

The demographic characteristics of patients from SEER database included age at diagnosis of FPLC, race (white, black and others), sex (male and female), tumor size [CS tumor size (2004–2015)], tumor laterality (right and left), tumor site (primary site-labeled: upper lobe, middle lobe, lower lobe and main bronchus), clinical TNM stage of FPLC [derived AJCC TNM, 7th ed (2010–2015)]. Patients were then restaged based on the 8th edition TNM staging system (12). The TNM stage of SPLC was not included in this study because there is still lack of evidence-based staging tool for MPLC.

Treatment information included surgery [RX Summ-Surg Prim Site (1998+): code 33 (lobectomy), code 21 (wedge resection) and code 22 (segmentectomy)], chemotherapy and radiotherapy (radiation recode: beam radiation). Wedge resection and segmentectomy were integrated into sublobar resection group. The follow-up and survival data were also extracted from the database with the information update time that ended in December, 2016. Overall survival (OS) and disease (lung cancer)-specific survival (CSS) were used to compare the survival outcome. In the analyses of CSS, only deaths for lung cancer-related cause (COD to site recode: “lung and bronchus”) were counted. This study focused on the survival time after the diagnosis of SPLC. The time interval (months) between the diagnoses of both primaries was also calculated. 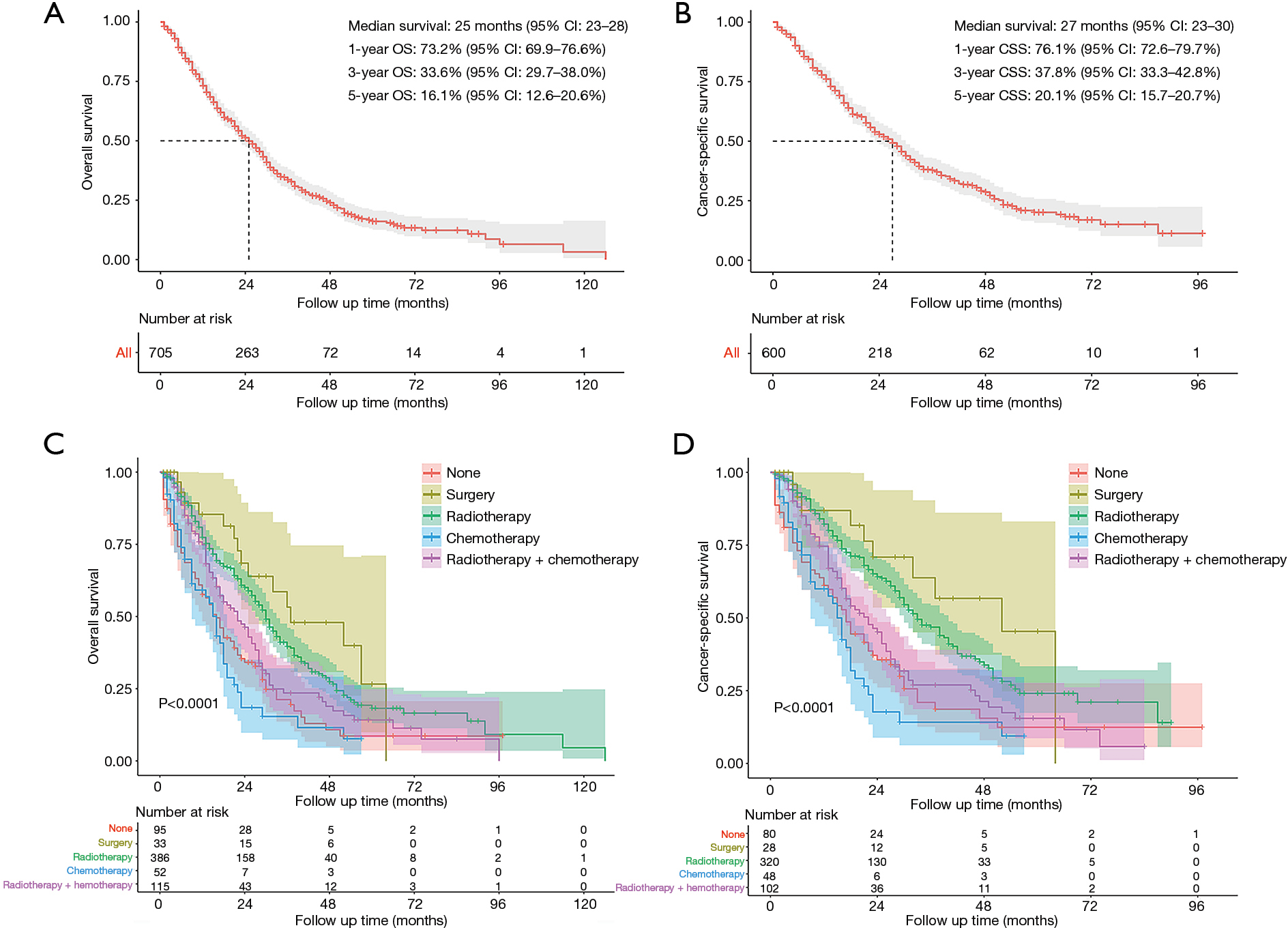 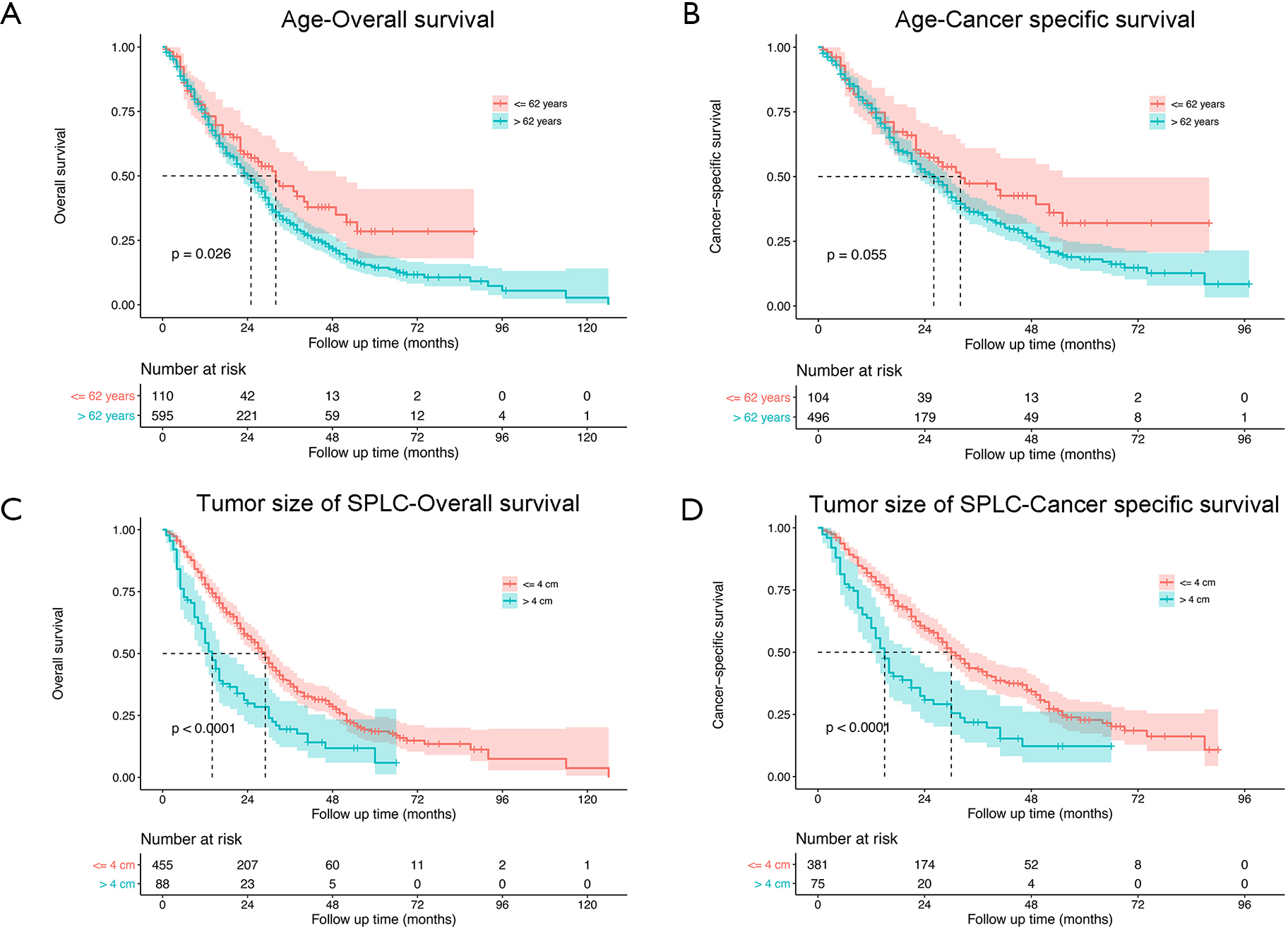 Figure S1 The OS and lung CSS between the groups according to age and SPLC tumor size. OS, overall survival; CSS, cancer-specific survival. 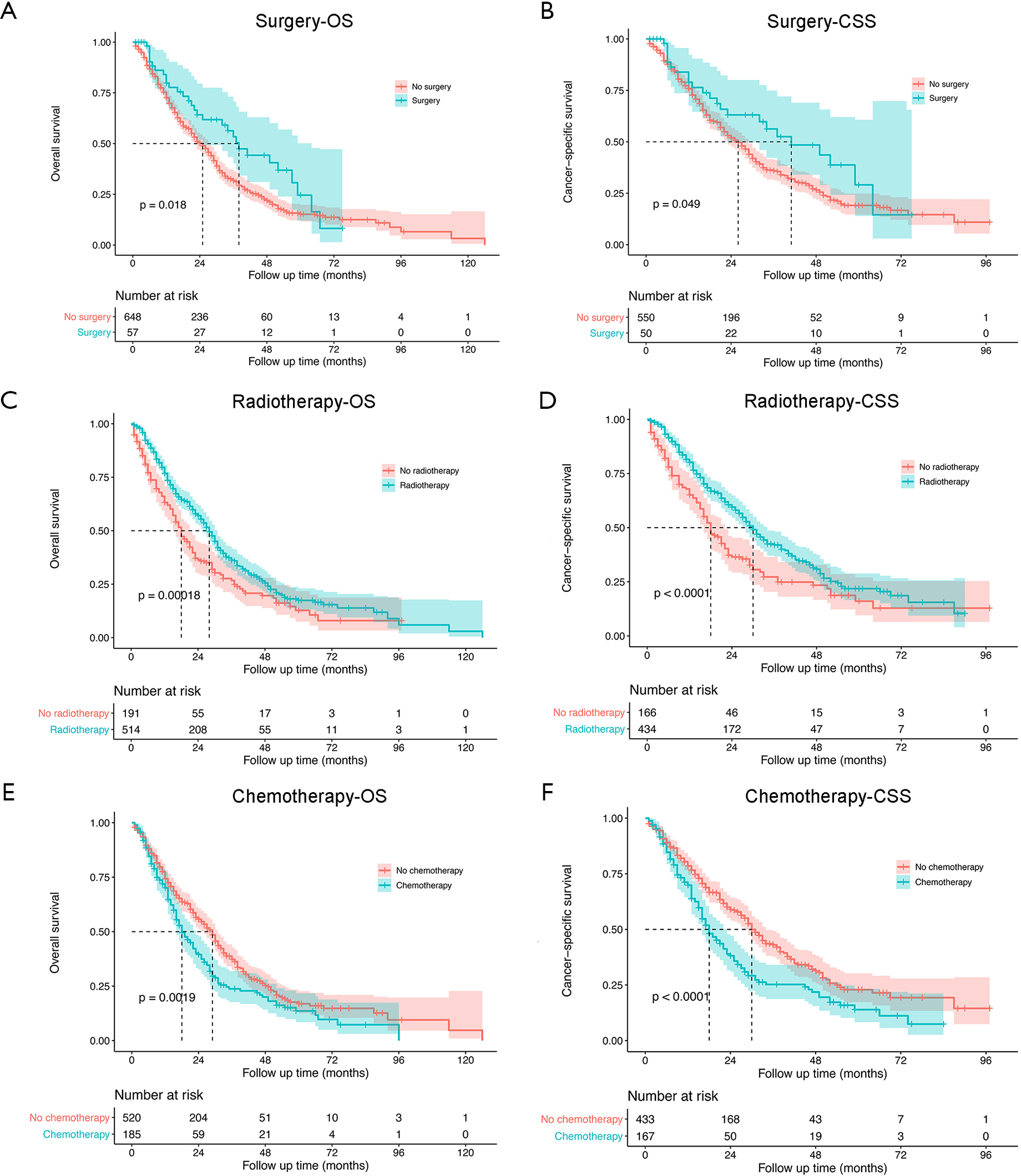 Figure 3 The number and percentage of patients at each treatment strategy. 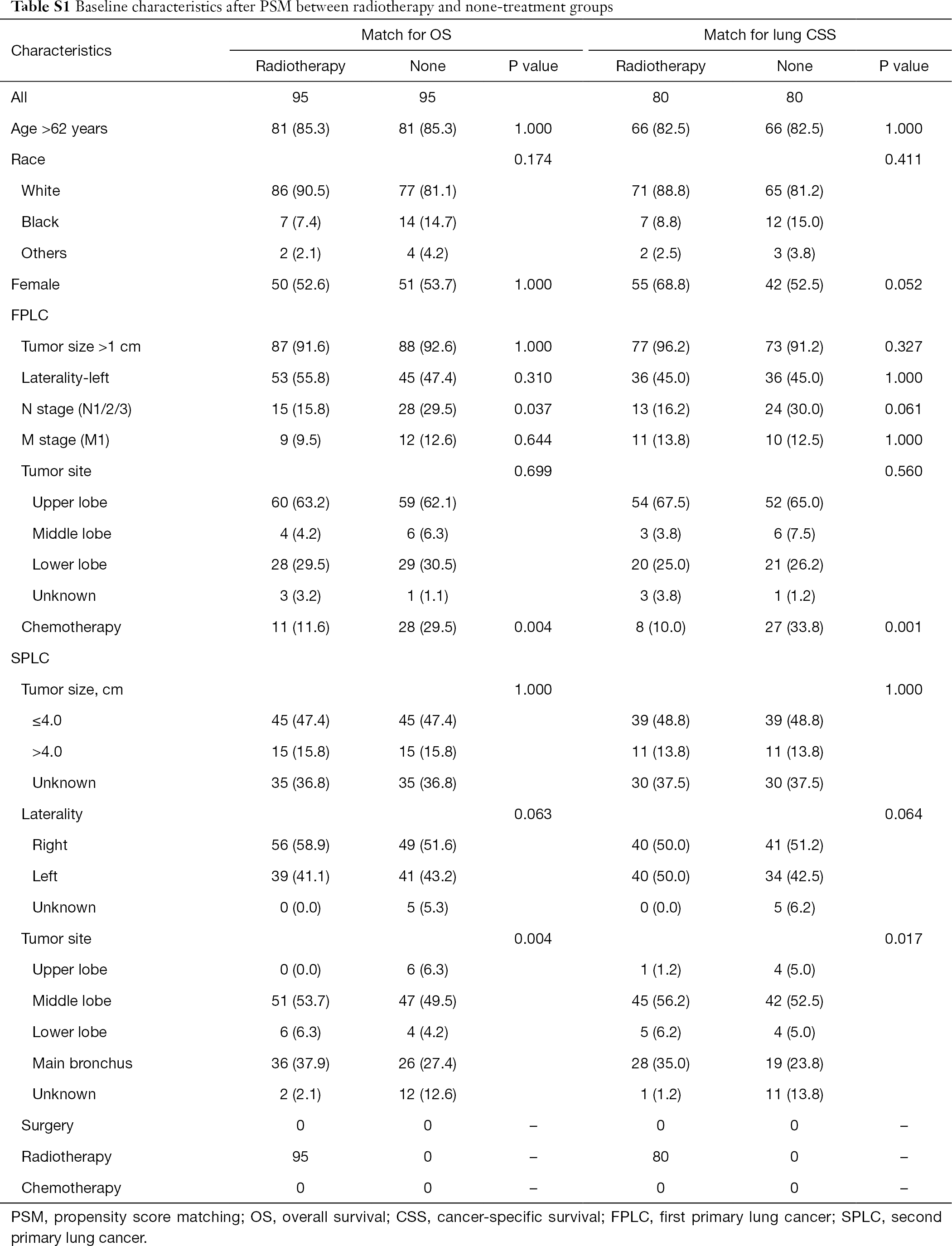 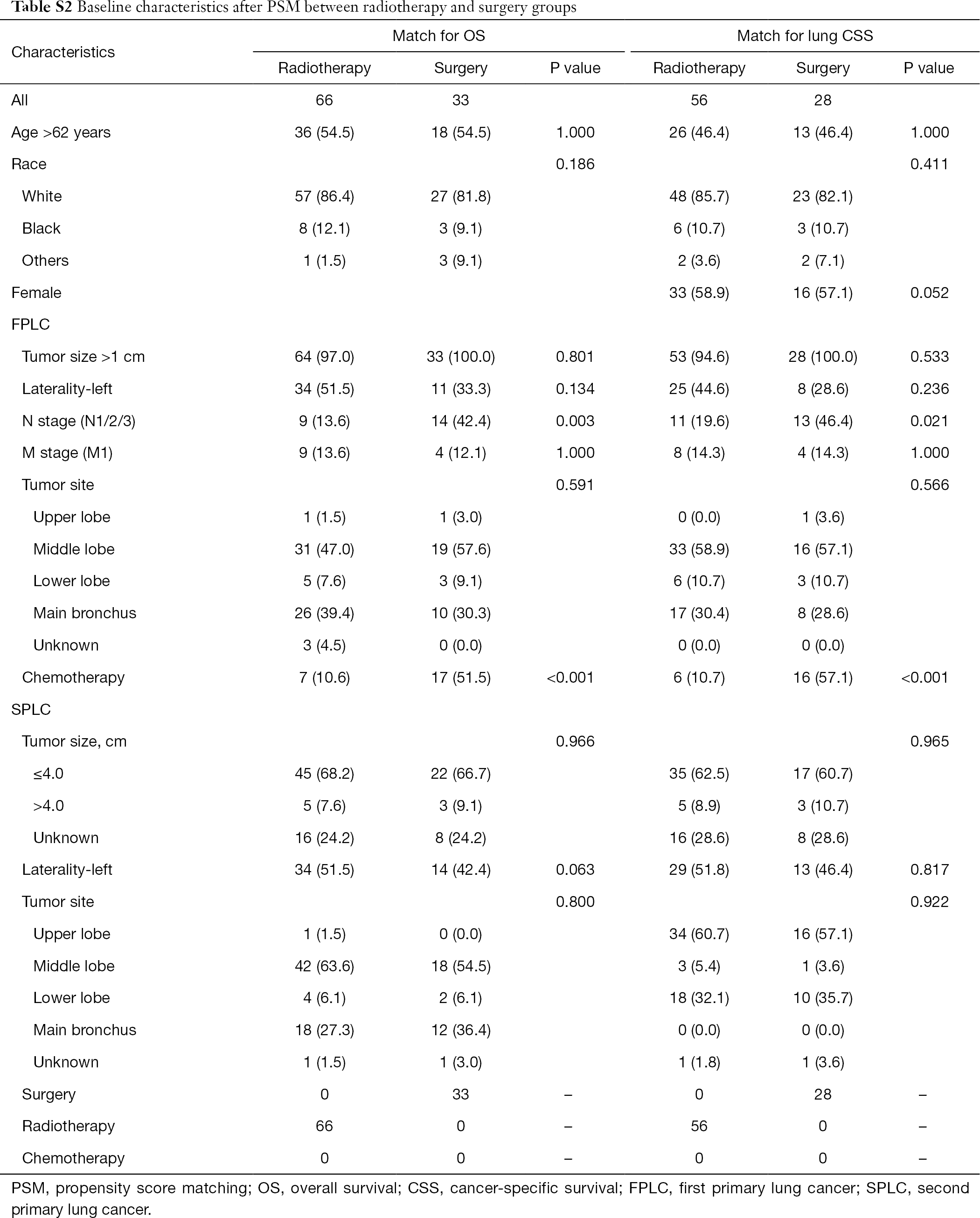 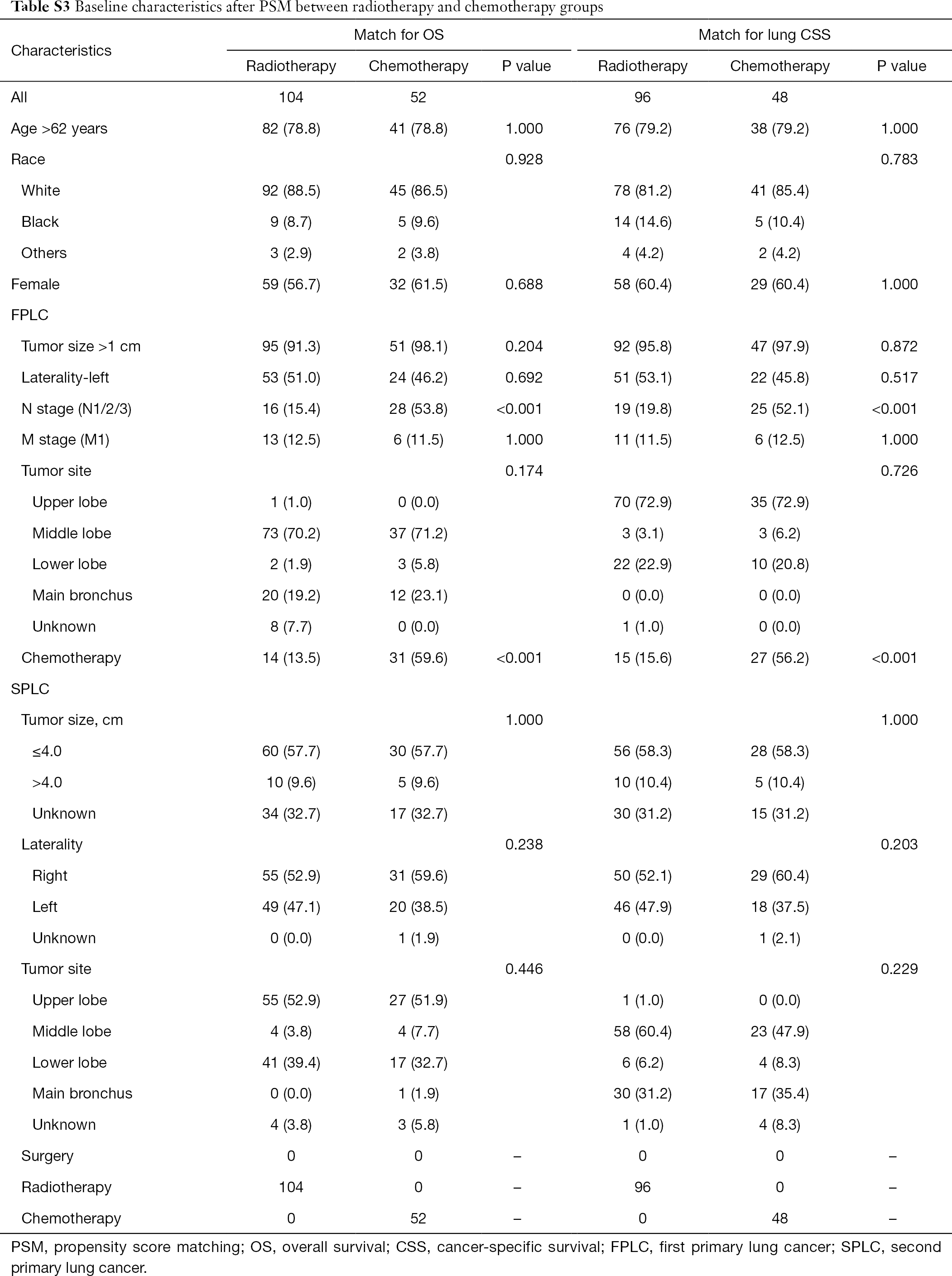 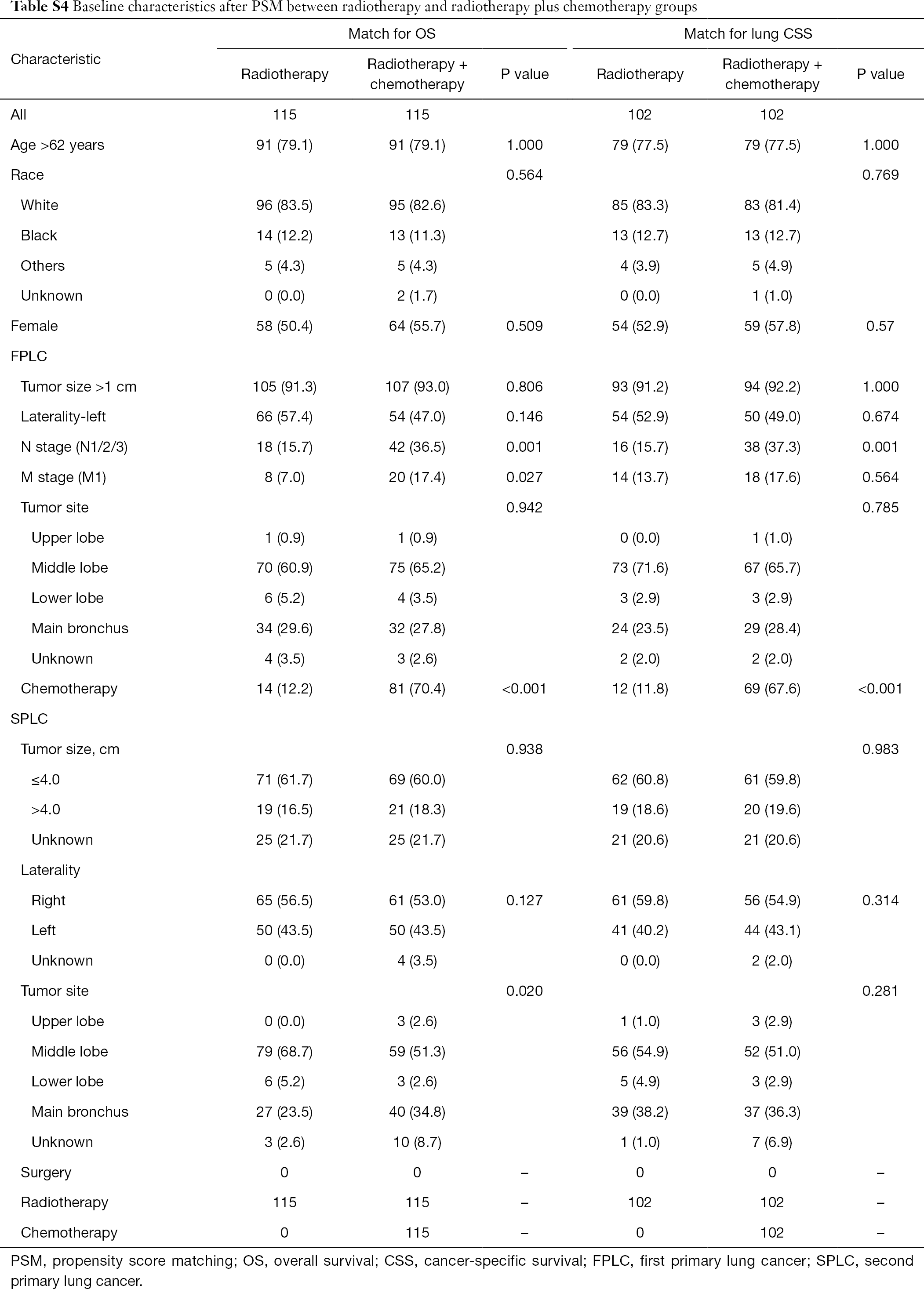 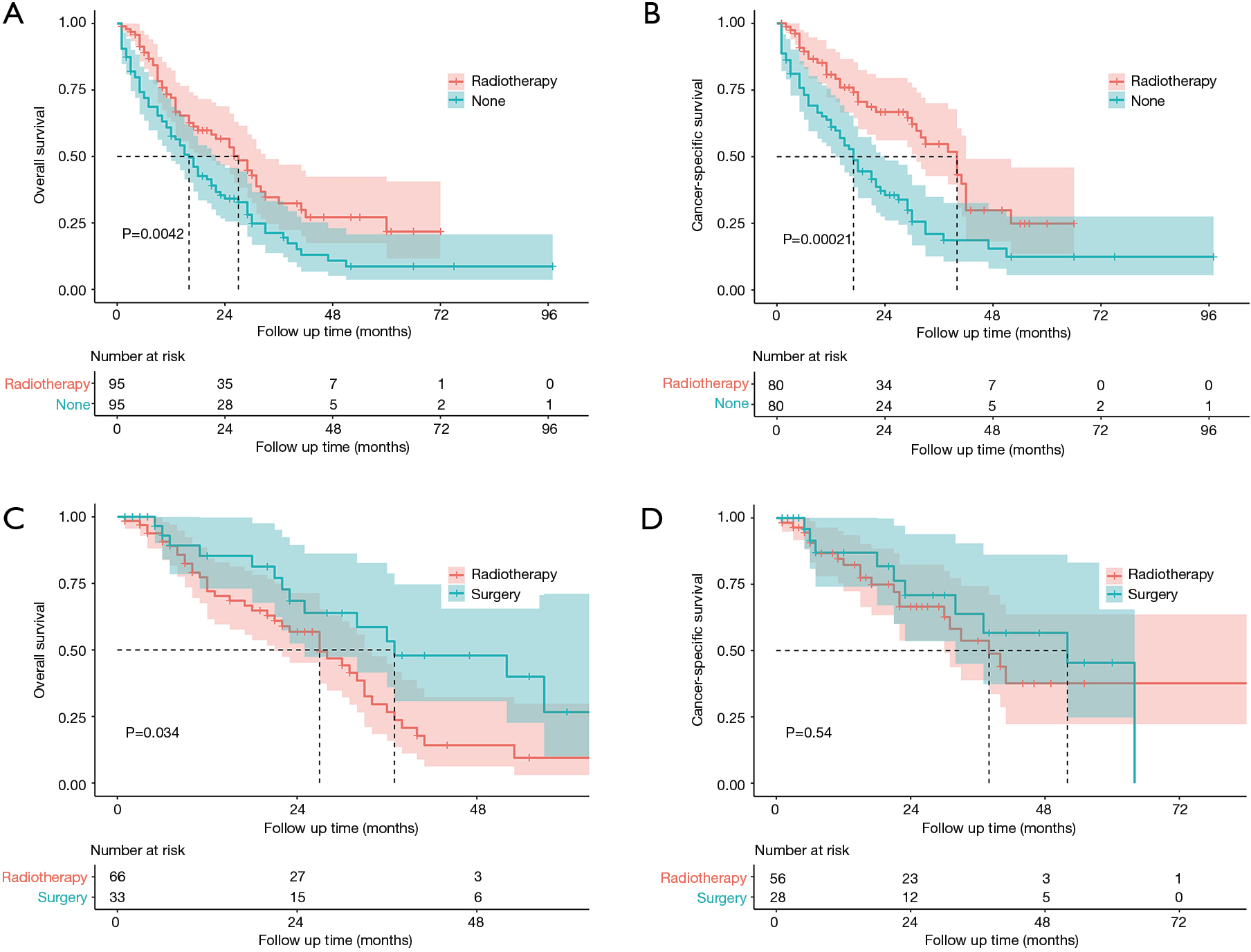 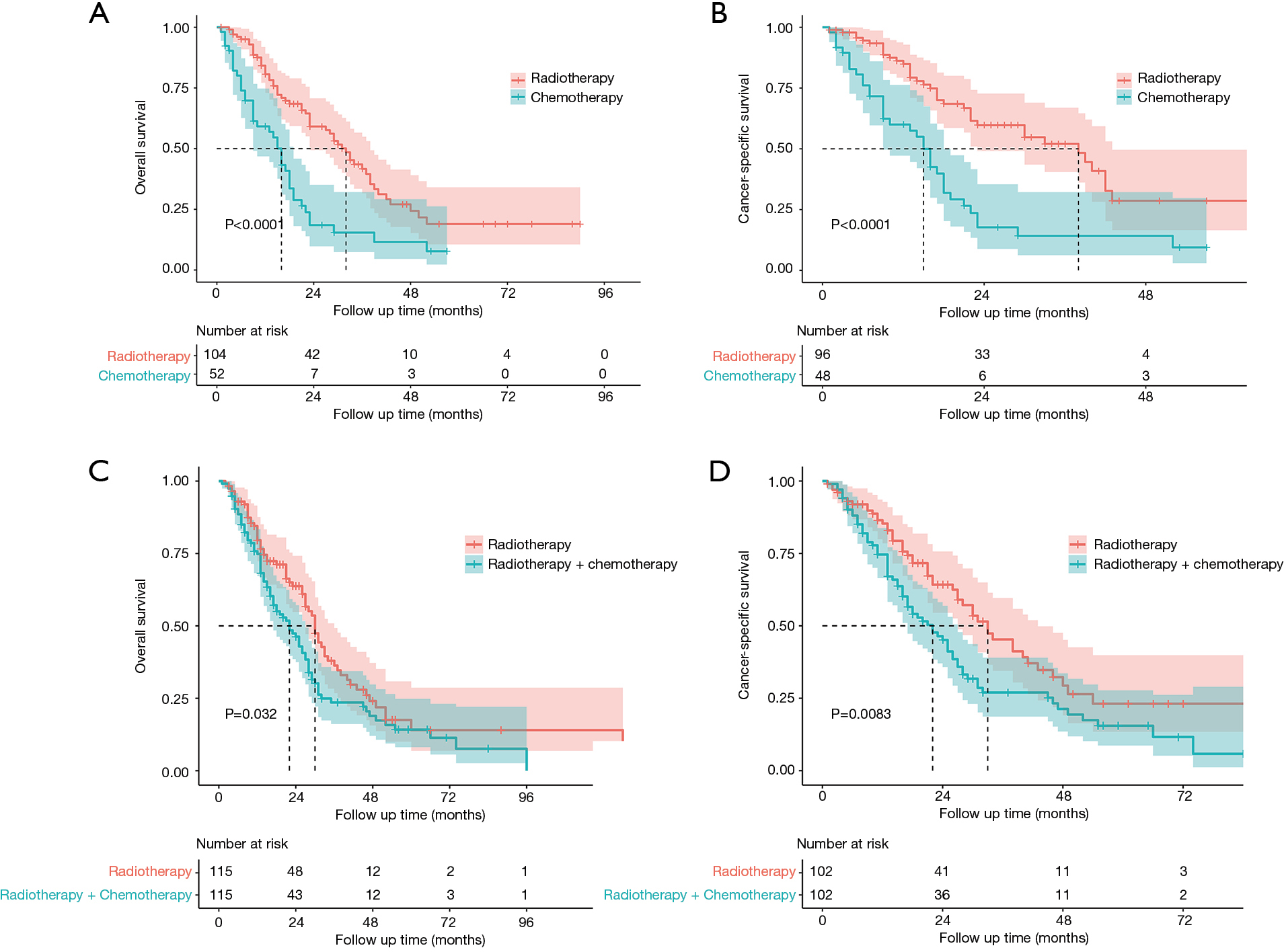 Currently, multiple lung carcinomas have not been the rare cases since the wide application of low-dose CT. MPLC, which has been reported more frequently in recent years, remains to be an emerging challenge with several issues that need to be urgently solved, including accurate diagnoses, appropriate treatments and reasonable follow-up periods. Actually, MPLC is difficult to be distinguished from pulmonary metastasis, and could not be well described and staged until the 8th edition TNM staging system (12). Exactly as the criteria suggested by Martini (3) and American College of Chest Physicians (ACCP) (14), pathological information is the key to the diagnosis. Thus, most of the present studies that focused on MPLC only enrolled patients who previously underwent surgical resection for FPLC. However, for patients that received radiotherapy for FPLC, it is much more likely to be incorrectly regarded as intrapulmonary metastasis or recurrence when they developed a SPLC, leading to missing optimal treatments. To our knowledge, very few studies have focused on the occurrence of SPLC in patients that previously received radiotherapy for FPLC. The SEER database provided the potential study population of SPLC patients, though by its own definition of multiple primaries.

The standard radical surgery for lung cancer patients remains to be lobectomy, which achieves a sufficient and safe excision region of tumor tissues, but causes more comorbidities and higher mortalities than sublevel resection or other noninvasive alternatives. Radiotherapy, led by SABR recently, demonstrated encouraging therapeutic effects with limited incidence of complications on early-stage lung cancer (11,15). For inoperable patients with early-stage lung cancer, SABR might be the first choice and showed similar prognosis to surgical procedures (8,9), though the long-term survival outcome needs to be further validated by randomized controlled trials. Actually, the previous studies indicated the feasibility of surgical resection for SPLC, and showed a great survival outcome (16-18), but whether radiotherapy is equally effective remains unclear. Considering that SPLC patients had suffered the FPLC, the physical conditions and pulmonary function reserve may not permit another surgery. Thus, SABR shows a great potential in terms of the treatment of SPLC.

This study identified the SPLC patients that previously received radiotherapy for clinical T1 stage FPLC from the SEER database. Besides age >62 years (HR: 1.48, 95% CI: 1.10–1.99; P=0.010) and tumor size >1 cm of SPLC (HR: 1.95, 95% CI: 1.51–2.53; P<0.001), we found that the survival time was also significantly associated with therapy strategies (Table 1). It seemed that performing surgery or radiotherapy could significantly improve survival (Figure 2C,D; P<0.05). However, patients that received chemotherapy had a worse survival than those who did not. This might attribute to the fact that chemotherapy was usually considered for seriously-ill diseases, such as lymph node metastasis or distant metastasis. Additionally, radiotherapy showed a slightly worse survival outcome than surgery, though difference was not significant. Nevertheless, both of radiotherapy and surgery groups performed with significantly better OS and CSS than none-treatment group and other therapy groups before PSM.

PSM is an effective method to minimize the side effects of confounding factors. The survival comparisons between radiotherapy and other groups were performed with well-matched baseline data (Tables S1-S4). Similar to the differences before matching, the radiotherapy group demonstrated significantly better OS and CSS than none-treatment, chemotherapy and radiotherapy plus chemotherapy groups after PSM (P<0.05; Figures 4,5). However, the surgery group had a significantly better OS than radiotherapy (P=0.034; Figure 4C), but no such significance was observed in the CSS curve (P=0.540; Figure 4D). Although there was a limited number of patients that underwent surgery and the CSS was not significantly different between surgery and radiotherapy groups, surgical resection might be more beneficial to the survival for SPLC patients. Thus, surgical procedures should be considered first if other conditions permitted. Despite that, many SPLC patients might not tolerate the surgery because of having suffered the treatments on FPLC. Then SABR might be an effective alternative, which had been accepted for SPLC in previous studies (19,20).

In addition to the clinical implications, there were several methodological innovations in our study. Firstly, considering the difficulty in establishing a large study cohort of SPLC, the SEER database provides a lot of data of MPLC patients for researches. Secondly, to identify potential prognostic factors for SPLC, a k-adaptive partitioning algorithm was used for the optimal categorization of continuous variables, which is based on survival data and minimizes information loss (13). Thirdly, the application of PSM made the survival comparisons more reliable between treatment groups.

There are also some limitations that should be noted in this study. The analyses we performed were based on the observational and retrospective data from the SEER database. Thus, the data bias and heterogeneity of the population could not be avoided. In addition, the definition criteria of MPLC in this database was not totally consistent with Martini’s (3) or ACCP’s (14), which mainly relies on pathological information. This was limited by the study population itself because the pathological data was unavailable for patients that received radiotherapy for FPLC. Furthermore, the surgery group consisted of much fewer patients than the radiotherapy group. This might attribute to the fact that many patients could not tolerate the surgery, otherwise they could have received surgery for FPLC. Therefore, whether surgical resection is more beneficial to survival than radiotherapy deserves further investigation in the future.

For patients who underwent radiotherapy for FPLC, the survival outcome following the treatment of SPLC was significantly associated with age >62 years, SPLC tumor size >1 cm and treatment strategies for SPLC including surgery, radiotherapy and chemotherapy. Overall, surgical resection may be more beneficial to survival than other treatments and should be considered first when patients’ physical conditions permit. However, if patients cannot tolerate surgery, radiotherapy can be an effective alternative.

Funding: This study was supported by a grant from the Ministry of Science and Technology of the People’s Republic of China (Grant Number 2016YFC0105207).

Reporting Checklist: The authors have completed the STROBE reporting checklist. Available at http://dx.doi.org/10.21037/jtd-20-2024

Conflicts of Interest: All authors have completed the ICMJE uniform disclosure form (available at http://dx.doi.org/10.21037/jtd-20-2024). The authors have no conflicts of interest to declare.

Ethical Statement: The authors are accountable for all aspects of the work in ensuring that questions related to the accuracy or integrity of any part of the work are appropriately investigated and resolved. The study was conducted in accordance with the Declaration of Helsinki (as revised in 2013). The SEER database was used publicly, all data included are anonymous and the relevant requirement about informed consent was thus waived. This study has been approved to be exempted research for no human subject involved by the Ethics Committee of Peking Union Medical College Hospital.